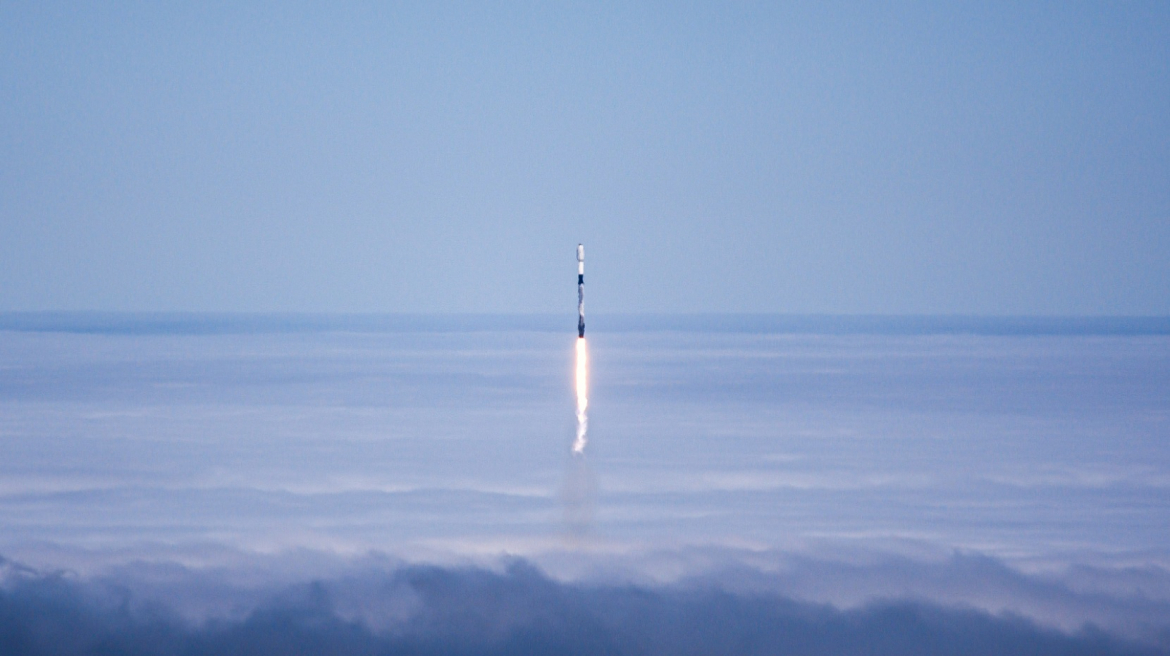 SpaceX broke several records on the Starlink Group 3-2 mission. Launching from Space Launch Complex 4 East (SLC-4E) at the Vandenberg Space Force Base in California, the Falcon 9 Block 5 placed 46 Starlink internet communication satellites into the third shell of the constellation.

With the eventual goal of being able to turn around SLC-4E as quickly as SLC-40 in Florida, SpaceX has been making a large number of upgrades to the Transporter/Erector (T/E) and pad infrastructure at pad 4E. The T/E is responsible for transitioning the Falcon 9 vehicle from horizontal to vertical. Once vertical, it provides the vehicle and payload with structural support, power and telemetry, and is used to fuel the vehicle through the Quick Disconnects (QDs).

Unlike the T/E at SpaceX’s other two Falcon 9 launch sites—LC-39A and SLC-40—SLC-4E utilizes an older design: the strong back falls 13º away from the rocket, starting at T-4 minutes, and is finished moving by T-3 minutes. From this position, the T/E does not move further and remains stationary during liftoff. This is drastically different from the “throwback” T/E style, which moves just under 2º away from the vehicle at roughly T-4 minutes, then falls the remaining distance from the vehicle (~45º) after liftoff.

By falling away further from the vehicle after liftoff, the T/E further avoids the Falcon 9’s exhaust, lessening the amount of refurbishment needed between launches. LC-39A has featured the throwback style T/E since SpaceX’s first launch from the pad (CRS-10), and SLC-40’s T/E was upgraded to the throwback style following AMOS-6. However, SpaceX currently has no plans to swap out SLC-4E’s T/E for a throwback style T/E.

The booster supporting this mission is B1071-4, which has flown three previous missions. This launch marks the 166th launch of the Falcon 9 and the 104th launch with a flight-proven booster.

B1071-4 landed on SpaceX’s West coast Autonomous Spaceport Drone Ship (ASDS) Of Course I Still Love You (OCISLY), stationed 635 km down range. As usual for West coast launches, OCISLY was towed downrange by Scorpius, and GO Quest is serving as ASDS support. Upon the successful landing—which marked SpaceX’s 132nd overall and 58th consecutive booster landing—the booster’s designation changed to B1071-5.

SpaceX will attempt to recover both fairing halves with their recovery asset NRC Quest 635 km down range. Both fairings will be recovered from the water ~50 minutes after launch. 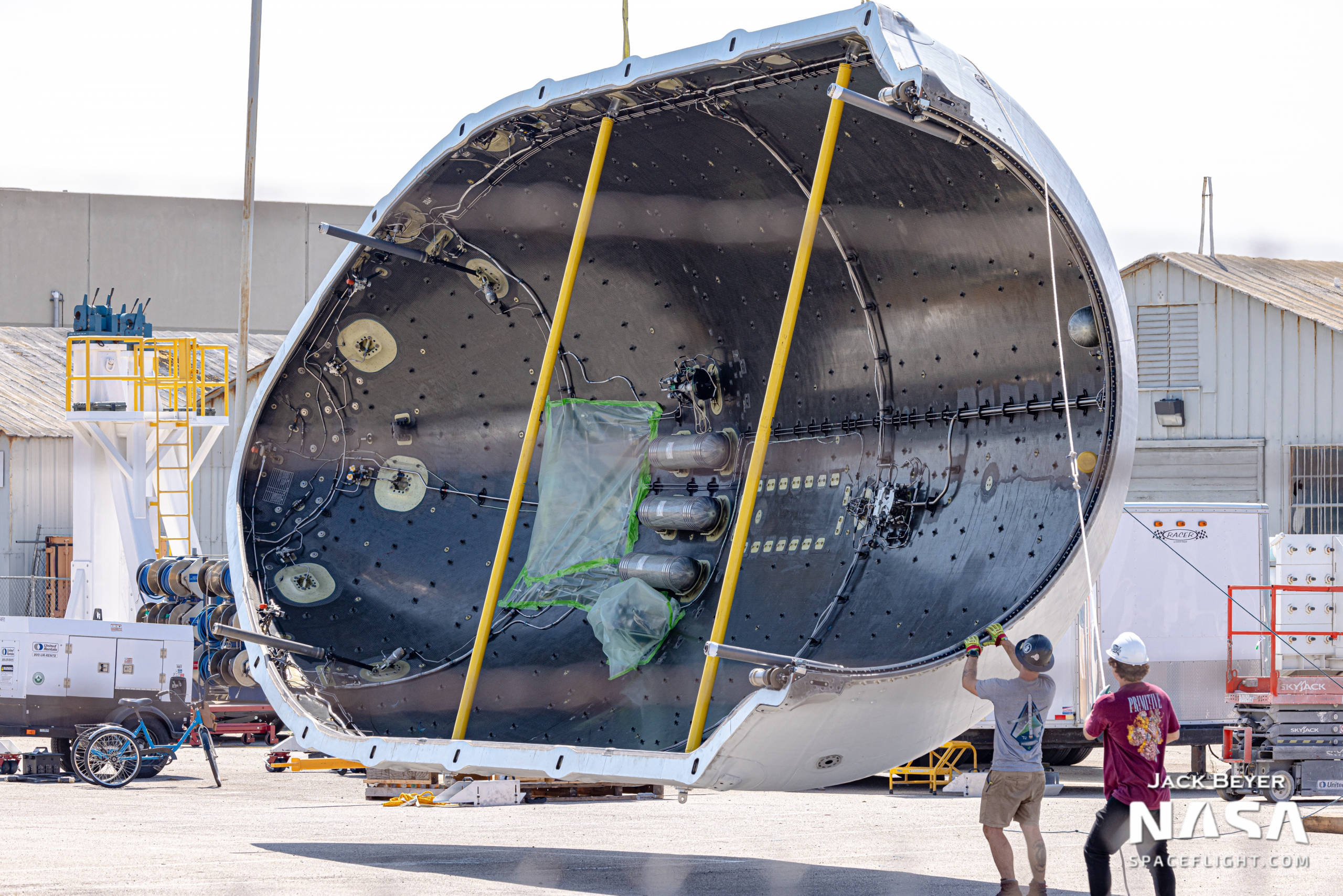 The inside of a recovered Falcon 9 fairing from the Starlink Group 3-1 mission. (Credit: Jack Beyer for NSF)

The Starlink Group 3-2 mission lofted another 46 satellites into the third shell of the Starlink constellation. Assuming none of the satellites fail, this will take shell 3 to 27.3% completion (in terms of working satellites) and the overall completion of the first five shells of Starlink deployments to 59.32%.

Assuming SpaceX holds its current launch cadence, it is expected the company will complete shells 3 and 4 by the end of the year, as shell 3 will require about eight launches to fill and shell 4 will require about 32 launches to fill. After these two shells are complete, it is unclear whether SpaceX will prioritize the 70° inclination Shell 2 or the polar orbiting Shell 5.

SpaceX is currently offering several Starlink packages, including Starlink for home, business, RV, and marine. In addition to the services already being offered, De Havilland Aircraft of Canada announced they are partnering with SpaceX to offer high-speed internet on their aircraft thanks to Starlink.

Did you miss it?

Earlier today, we launched new cabin enhancement features that increase flexibility to the Dash 8-400. This includes a first of its kind collaboration with @SpaceX's Starlink to enable high speed internet on DHC aircraft.https://t.co/7Ji4o601tY pic.twitter.com/bipXxwX2WD

Given the “go” from the technical go/no-go poll at T-38 minutes, Falcon 9 began its fueling sequence at T-35 minutes when the vehicle began to load sub-cooled RP-1 on both stages and super chilled liquid oxygen (LOX) on the first stage.

By T-16 minutes, the T/E is purged and loading of LOX onto the second stage begins.

Seven minutes before launch, the vehicle begins chilling the engines on the first stage. This is done to reduce the thermal shock on the engines as LOX flows through them at ignition. At T-4 minutes, the T/E is rotated back to launch position–13 degrees from the vehicle.

Assuming all nine engines report a nominal start-up, at T0 the vehicle commands the hydraulic launch clamps to release it, allowing it to lift off.

The second stage then coasted for ~45 minutes, before igniting again for just under a second. The stage then began rotating end-over-end to deploy the satellites at T+1:03:03 into low Earth orbit.

After payload deployment, the MVac engine will perform a third burn to deorbit itself over the Southern Pacific Ocean.

SpaceX has one more launch planned for July: Starlink Group 4-25 will launch on July 24 from LC-39A in Florida. The Korean Pathfinder Lunar Orbiter (KLPO) will then launch on a Falcon 9 from the East Coast on August 2.