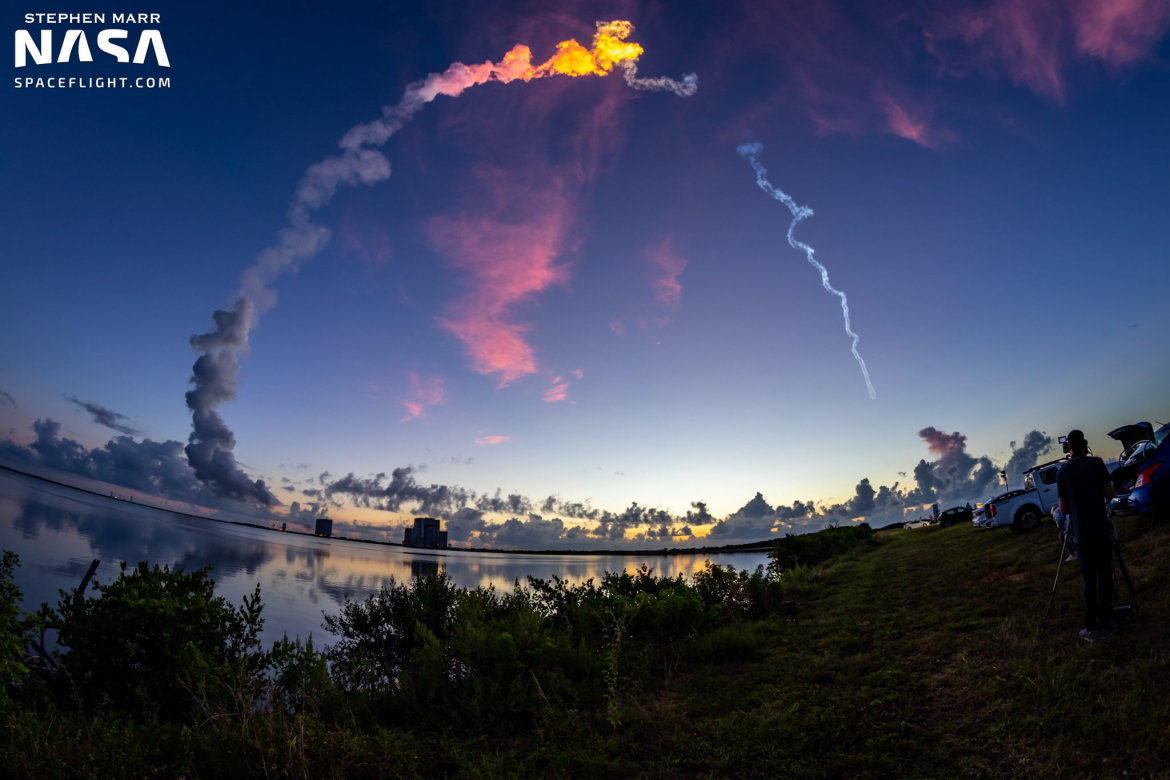 United Launch Alliance was in action Thursday, using an Atlas V rocket to deploy a missile detection satellite for the US Space Force. Liftoff of the SBIRS GEO 6 mission from the Cape Canaveral Space Force Station is occurred at the opening of a 40-minute window at 6:29 AM EDT (10:29 UTC).

The Space-Based Infrared System, or SBIRS, plays a key role in defending the United States and its allies from missile attacks. Combining dedicated satellites in geosynchronous orbit and sensors hosted on other spacecraft in inclined elliptical orbits, it keeps a constant watch for the signs of rocket and missile launches around the world. SBIRS satellites are equipped with infrared sensors to detect missiles by the heat signatures of their exhaust plumes.

Thursday’s launch deployed the constellation’s sixth geosynchronous satellite. SBIRS GEO 6 is also expected to be the last SBIRS satellite to launch before a next-generation missile detection system begins deployment in the coming years.

The SBIRS program began in the 1990s as the US Air Force sought a fleet of more advanced early warning satellites to augment and eventually replace the Defense Support Program (DSP) satellites then operating in that role. DSP itself had been in service since the 1970s – the first satellite having been launched in November 1970 with the project then named Integrated Missile Early Warning Satellite (IMEWS) – and evolved across 23 satellites of three generations. The final DSP satellite launched aboard a Delta IV Heavy in November 2007, and although this spacecraft failed shortly after reaching orbit, a small number of its sisters are still in operation alongside SBIRS.

The original plan for the SBIRS constellation called for a low Earth orbit element, SBIRS Low, as well as the highly elliptical orbit (HEO) and geosynchronous components. This aspect of the program was canceled in 1999, with two prototype satellites then under construction being repurposed by the Missile Defense Agency for their Space Tracking and Surveillance System (STSS) Demo mission, launched in 2009. STSS demonstrated a similar role to that which had been planned for SBIRS Low, tracking and characterizing missiles in flight to provide more accurate targeting data for anti-ballistic missile (ABM) weapons tasked with intercepting them.

The project’s first dedicated satellite, SBIRS GEO 1, lifted off in May 2011 atop an Atlas V rocket. It was followed by SBIRS GEO 2 in March 2013, GEO 3 in January 2017, and GEO 4 a year after that. The GEO 3 and 4 satellites were swapped before launch, with SBIRS GEO 3 using Space Vehicle 4 (SV-4), and GEO 4 using SV-3. This was done as a cost-saving measure since SV-3 had been completed and placed into storage, while SV-4 was just finishing production and could be launched first to save bringing SV-3 out of storage only to put SV-4 back in.

The SBIRS GEO 5 and 6 spacecraft are of an upgraded design, based around Lockheed Martin’s modernized LM 2100M satellite bus. GEO 5 launched in May 2021, with Thursday’s launch of GEO 6 completing the constellation. Two additional satellites had been planned but were canceled in the Air Force’s 2019 budget to free up resources for the successor program, Next-Generation Persistent Overhead Infrared (NG-OPIR). DSP, SBIRS, and NG-OPIR were all transferred from the Air Force to Space Force upon Space Force’s formation in 2019, with Space Delta 4 responsible for the projects.

At the time of the SBIRS GEO 1 launch, two SBIRS payloads were already in orbit. SBIRS HEO 1 and HEO 2 were not built as dedicated spacecraft, but instead are sensors hosted aboard National Reconnaissance Office (NRO) satellites in elliptical Molniya orbits. These were launched in June 2006 and March 2008, with another pair following in December 2014 and September 2017. 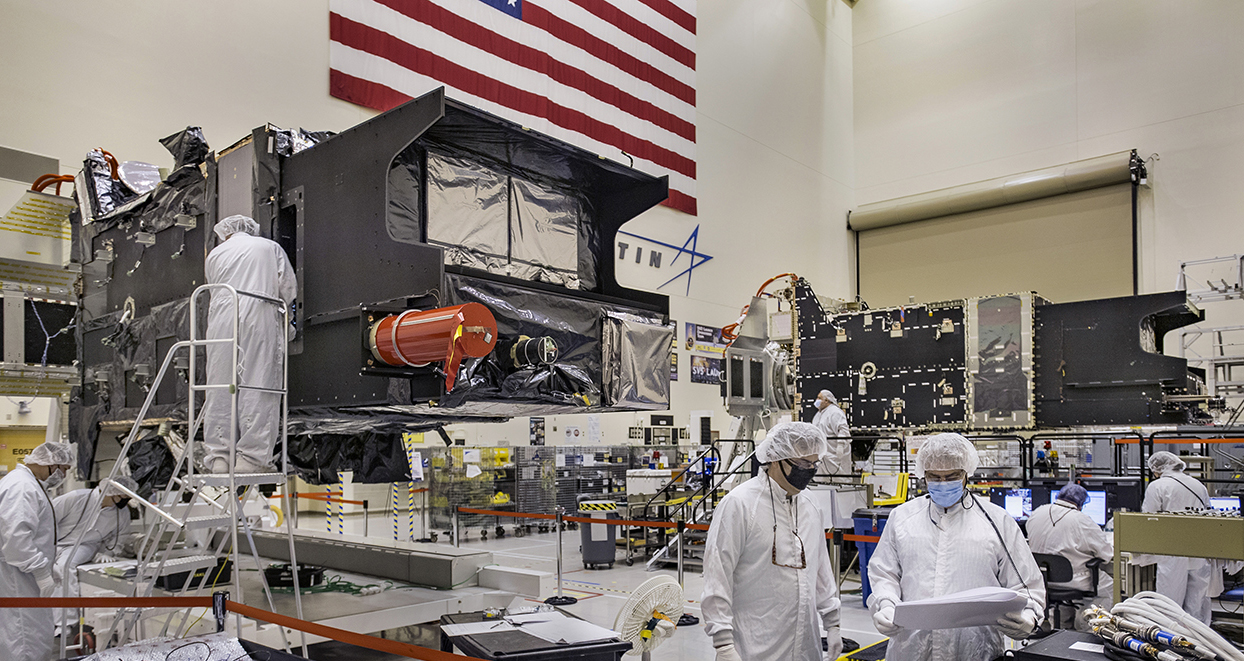 Like SBIRS, NG-OPIR will use satellites in both geosynchronous and Molniya orbits. The first NG-OPIR GEO satellite is currently slated for launch in 2025, while the first launch of the NG-OPIR Polar series – the Molniya orbit spacecraft – is expected no earlier than 2027. A pathfinder satellite, Wide Field of View (WFOV) Testbed, was launched as part of the US Space Force 12 (USSF-12) mission on the previous Atlas V launch at the start of July.

Like the five previous SBIRS GEO satellites, SBIRS GEO 6 was launched by United Launch Alliance (ULA), using an Atlas V rocket. This was the 95th flight of the Atlas V, which first flew in August 2002 after being developed as part of the Air Force’s Evolved Expendable Launch Vehicle (EELV) program – now known as National Security Space Launch (NSSL).

The Atlas V that carried out Thursday’s mission has the unique tail number AV-097. The vehicle is in the 421 configuration, which incorporates a four-meter-diameter payload fairing, a pair of solid rocket boosters to augment the thrust of the first stage, and a single-engine Centaur upper stage. AV-097 lifted off from Space Launch Complex 41 (SLC-41) at the Cape Canaveral Space Force Station in Florida.

Atlas V is a two-stage rocket. Its Common Core Booster (CCB) first stage powers the early stages of flight as the rocket climbs through Earth’s atmosphere. Centaur, a highly-efficient cryogenic fuel upper stage, then takes over to deliver the rocket’s payload into its prescribed orbit. Thursday’s launch targeted a geosynchronous transfer orbit with a raised perigee – the point of the orbit closest to the Earth’s surface – of 5,218 kilometers (3,243 miles, 2,818 nautical miles), an apogee of 35,335 km (21,956 mi, 19,079 nmi), and an inclination of 17.63 degrees.

The moments of no return and taking flight as Atlas V lept off the pad to deliver the SBIRS GEO-6 mission to orbit.

Miss the first Cape launch of the day? @NASASpaceflight has you covered with a replay on our YouTube channel.https://t.co/JDAyDjXhNk pic.twitter.com/Y9siuyxvnP

AV-097 arrived at Cape Canaveral aboard ULA’s transport ship, R/S RocketShip, in June. Once SLC-41 had been vacated by the launch of AV-094 on the preceding USSF-12 mission, integration of the rocket began with Launch Vehicle On Stand (LVOS) on July 12th. This marked the CCB’s arrival at the Vertical Integration Facility (VIF) and its erection atop the Mobile Launch Platform (MLP). Over the next three days, two GEM-63 solid rocket motors were attached to the CCB, and the Centaur upper stage was stacked on top of the CCB.

SBIRS GEO 6 arrived at the VIF on July 26th, encapsulated in the payload fairing that will protect it as Atlas climbs through the atmosphere. This mission used an Extra-Extended Payload Fairing (XEPF), the longest of three four-meter fairings used on the Atlas V and one of six different fairings with which the rocket can fly – three lengths of the five-meter fairing are also available. In addition, the rocket can fly without a fairing when launching Boeing’s Starliner spacecraft.

After a Launch Readiness Review on Monday gave the green light to proceed, Atlas rolled out to the launch pad on Tuesday atop the MLP. Departing the VIF at 10:00 a.m. local time (14:00 UTC), the launch platform was “hard down” at the pad one hour and 22 minutes later. Fuelling of the first stage propellant tanks with RP-1 – rocket-grade kerosene – was completed on Tuesday evening. Loading of the second stage’s liquid hydrogen (LH2) fuel and the liquid oxygen (LOX) oxidizer for both stages takes place on launch day as these propellants boil off at ambient temperatures.

The first stage is powered by a single RD-180 engine, which has two combustion chambers. At the T-2.7 second mark in Thursday’s countdown, the RD-180 ignited, with the twin GEM-63 motors also lighting shortly afterward. At T+1.1 seconds the thrust produced by the rocket exceeded its weight, so it lifted off and begin its climb toward space. Six seconds into the flight, Atlas initiated its first pitch and yaw maneuver to put it on the right track for its destination orbit.

Atlas flew east from Cape Canaveral, out over the Atlantic Ocean. It took 48.9 seconds for the rocket to reach Mach 1, the speed of sound. Three and a half seconds later Atlas passed through Max-Q, the area of maximum dynamic pressure.

The GEM-63 solids burned for about 98 seconds before depleting their propellant. After burnout, the spent casings remain attached to Atlas until conditions are right to ensure a clean separation with no risk of recontact between the spent motor casings and the Atlas vehicle. The SRMs were jettisoned at two minutes, 13.3 seconds mission elapsed time.

With the GEM-63s gone, the RD-180 engine continued to fire alone. It burned for the first four minutes and 12.4 seconds of the mission, with its shutdown being a mission milestone designated Booster Engine Cutoff (BECO). Six seconds after BECO the Centaur upper stage separated from the booster and begin its prestart sequence. Ignition of Centaur’s RL10C-1-1 engine took place 10 seconds after stage separation. Eight seconds after Centaur ignites, the rocket’s payload fairing separated, exposing SBIRS GEO 6 to space.

The SBIRS GEO 6 mission marks the second flight of the RL10C-1-1 engine, in place of the RL10C-1 that has been used on most of Atlas V’s recent missions. This new version of the veteran RL10 engine was first flown on the SBIRS GEO 5 launch last year and incorporates an extended nozzle for increased thrust, and improved manufacturing techniques including 3D printing.

Despite performing nominally during its first flight and successfully delivering the payload into orbit, the engine bell was observed to be vibrating far more than had been expected, so engineers have taken their time to review data from that mission before allowing the new engine to fly again. For Thursday’s launch, the engine flew without its full nozzle extension, leaving it about the same length as the RL10C-1. Although the RL10C-1-1 is being introduced on Atlas V, it is expected to go on to power a new version of Centaur that is under development for ULA’s next-generation rocket, Vulcan. 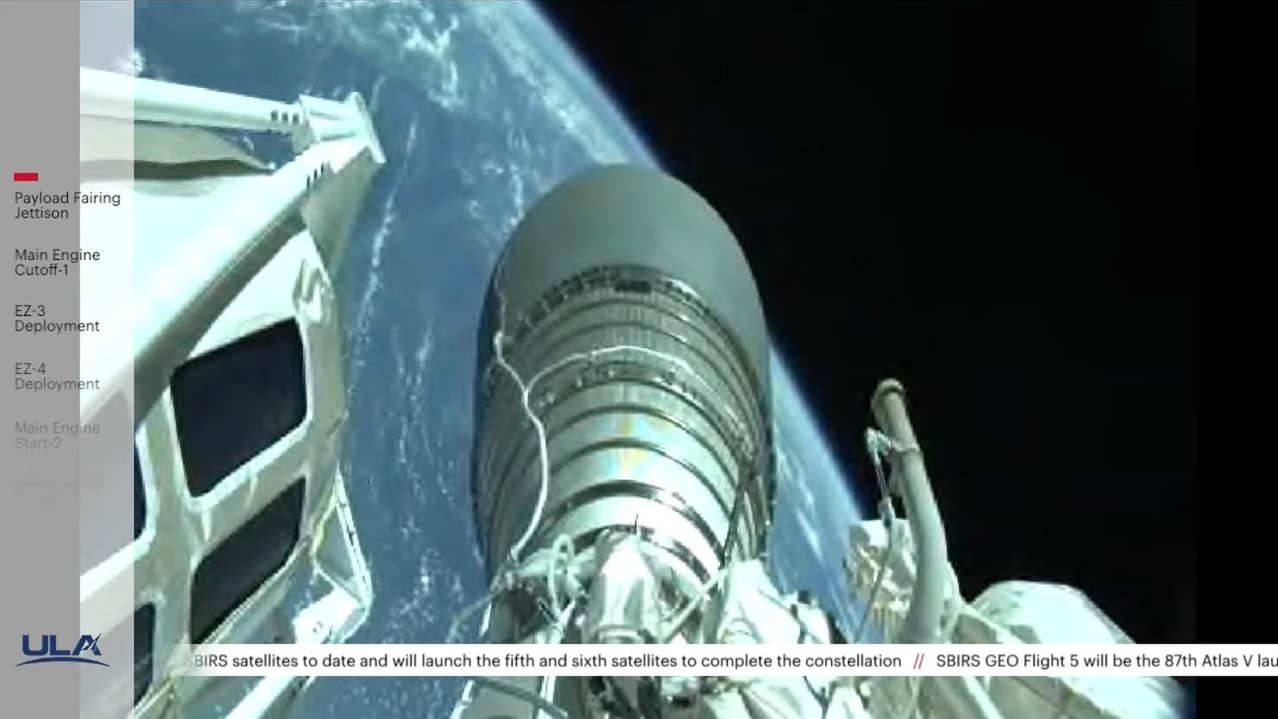 The RL10C-1-1 with its extended nozzle, seen during the SBIRS GEO 5 launch. (Credit: ULA)

Thursday’s mission called for Centaur to make three burns of its RL10C engine. The first burn was the longest, lasting eight minutes and 27 seconds to place Centaur and SBIRS GEO 6 into an initial parking orbit. After a ten-minute coast phase, Centaur made another four-minute, 44-second burn to raise itself into an elliptical transfer orbit. This burn is followed by an extended coast as the upper stage and its payload gain altitude.

During this coast phase two small satellites, named EZIO-5 and 6, are expected to be deployed from Centaur’s Aft Bulkhead Carrier. These are likely similar to the EZ-3 and EZ-4 satellites deployed during the first coast of the SBIRS GEO 5 mission, which were 12U CubeSats flown as part of Space Systems Command’s Technology Demonstration Orbiter (TDO) program.

Two and a half hours after the second burn concludes Centaur fired again for 58 seconds to further raise the orbit. SBIRS GEO 6 separated two minutes and 49 seconds after the end of the third burn. Centaur then performs a blowdown and passivation before the official end of the launch mission at T+3 hours, 59 minutes, and 27 seconds mission elapsed time.

The SBIRS GEO 6 mission is ULA’s fifth launch of 2022, with all of the company’s missions so far this year using the Atlas V rocket. Attention now moves to the west coast and the Delta IV Heavy rocket, which ULA is readying for a September launch with the NROL-91 mission. This mission for the National Reconnaissance Office will likely see the deployment of a heavy optical imaging satellite. The next Atlas V launch – also slated for September – will fly out of Cape Canaveral carrying a pair of commercial communications satellites for SES.