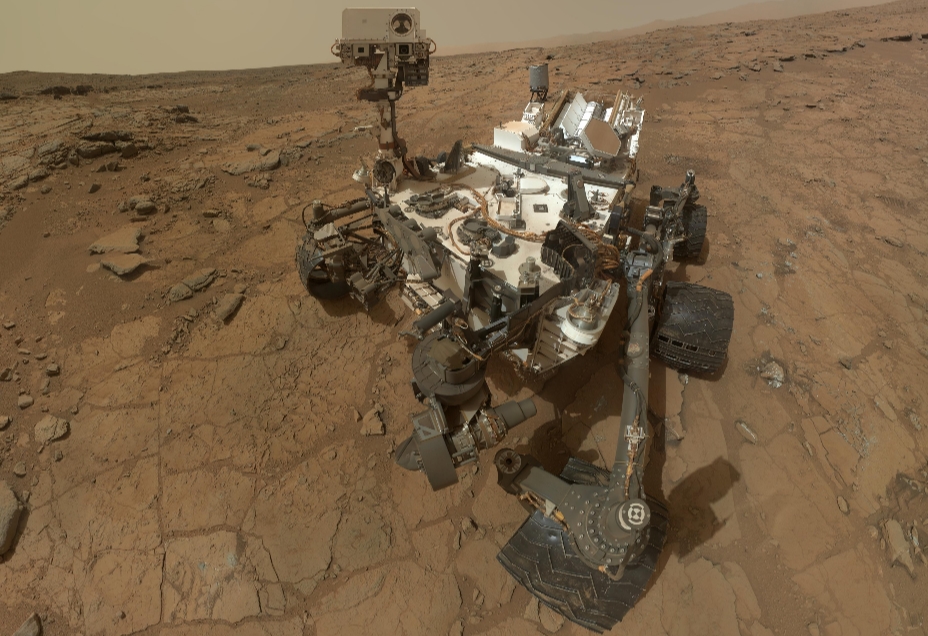 After successfully landing on Mars on August 6, 2012 (UTC), Curiosity continues to unlock the secrets of the Red Planet as the vehicle explores Gale Crater. Since landing, the rover has traveled over 17.5 miles (28.1 km) and made multiple scientific discoveries. Curiosity is now in the process of exploring and traversing Mount Sharp, the 5.5-kilometer-high mountain that lies in the center of Gale Crater.

Journey to the Red Planet

Curiosity’s journey began on November 26, 2011, when it was launched aboard a United Launch Alliance Atlas V rocket in the 541 configuration. The 541 configuration signifies that the launch vehicle utilized the five-meter-diameter fairing, four solid rocket boosters (SRBs), and a single engine on the Centaur upper stage. 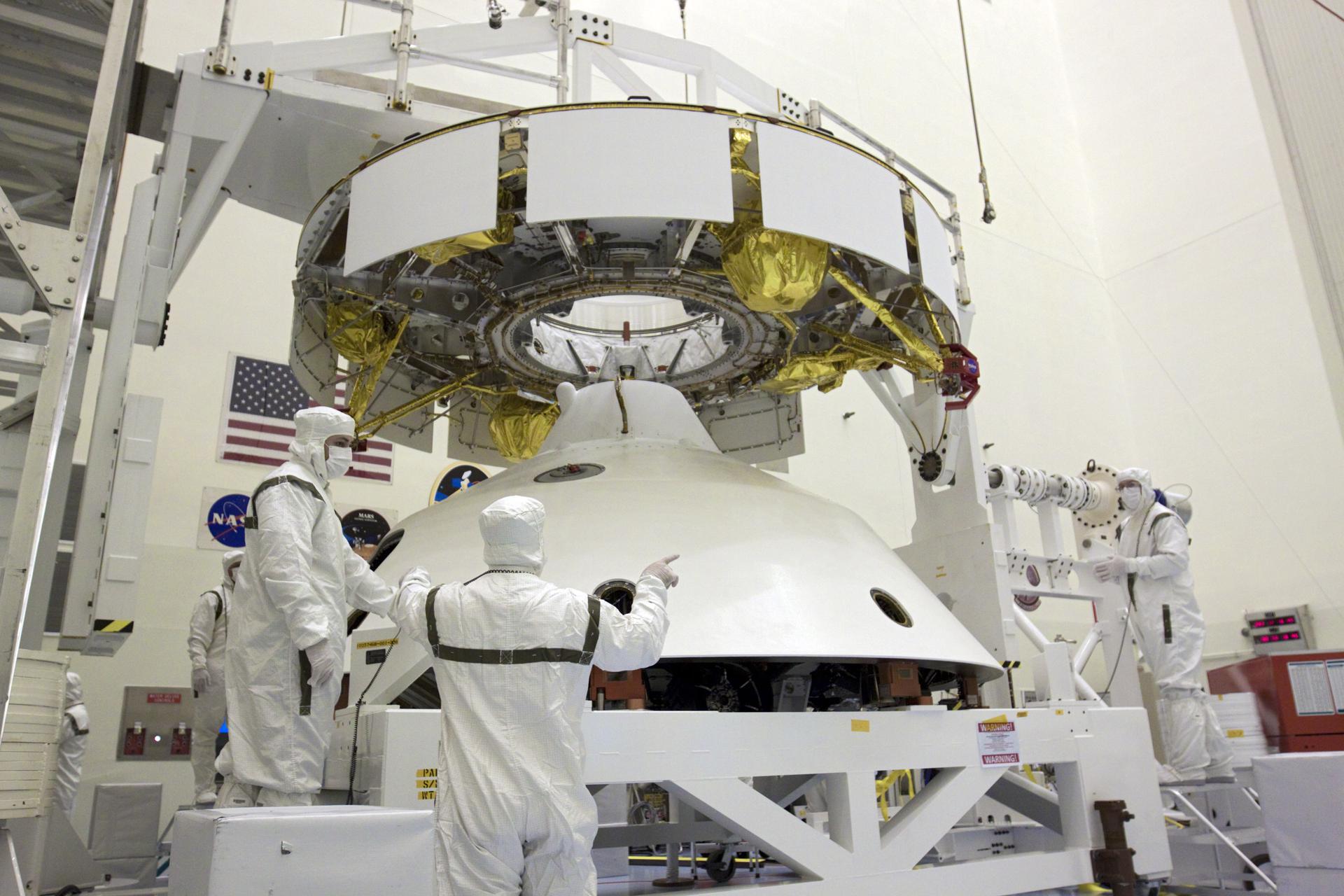 Curiosity’s cruise stage (top) is mated with the conical aeroshell. Notice how one of Curiosity’s wheels is visible peeking out from the bottom of the aeroshell. (Credit: NASA/JPL-Caltech/MSSS)

After deploying from the upper stage, the vehicle spent over eight months coasting through deep space and performed four trajectory correction maneuvers to fine-tune its trajectory as it approached the Red Planet. During this time, the rover was encapsulated inside its aeroshell, attached to the cruise stage. The aeroshell was designed to protect and maneuver the rover as it entered and descended through Mars’ atmosphere, while the cruise stage provided power, communication, and temperature control to the rover while en route to Mars.

As the vehicle approached the Red Planet, it jettisoned its cruise stage around 10 minutes before atmospheric entry.

Upon reaching the atmosphere, the vehicle entered the Entry, Descent, and Landing (EDL) phase of the mission, which the mission team nicknamed “The Seven Minutes of Terror.”

As the vehicle entered the Martian atmosphere, the aeroshell began to fire maneuvering thrusters to keep the vehicle on a correct course toward its landing site.  During entry, the heatshield protected the rover from temperatures upwards of 1600°F (871°C) during peak heating.

Once it was safely through atmospheric entry, the vehicle deployed a parachute to slow down further. This parachute was the largest supersonic parachute flown at the time, opening up to a diameter of around 16 meters (51 ft).

After descending under parachute for just under two minutes, the rover separated from the aeroshell and continued its descent using its rocket-powered skycrane. The skycrane acted as the rover’s final descent stage, slowing the vehicle down to enable a soft landing on the surface. The skycrane – while hovering with its engines – then used cables to lower the rover down the final few meters onto the surface to prevent too much debris from getting kicked up by the skycrane’s engines. 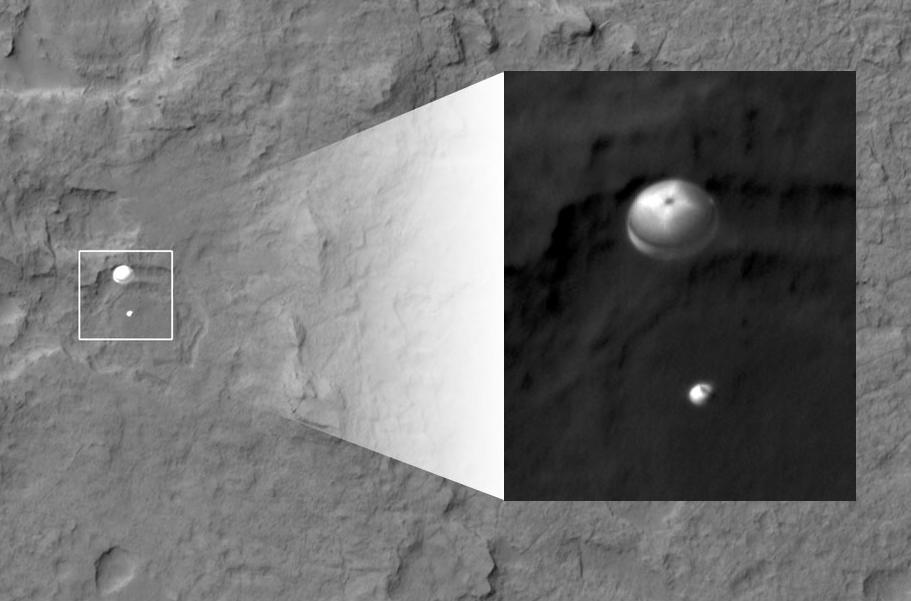 Curiosity descending toward Mars under parachute, as pictured by the Mars Reconnaissance Orbiter (MRO). While taking this picture, MRO was also receiving telemetry from the descending rover and transmitting it back to Earth. (Credit: NASA/JPL-Caltech/MSSS)

The system was the first of its kind ever used on a mission and was needed due to the vehicle’s immense mass compared to previous rovers. Curiosity masses 899 kilograms (1,982 lb) while previous rovers such as Spirit and Opportunity were much smaller – only 185 kg (408 lb) – and were able to utilize an airbag system to land safely.

Curiosity’s updated twin, Perseverance, also used the skycrane system to land on Mars in February of 2021.

Now safely on the ground, the tether connecting the two craft was severed – allowing the skycrane to fly a safe distance away from the rover and crash as intended. The vehicle spent the next few weeks performing checkouts and drive tests to verify all systems were operating nominally.

With a decade of exploration under its belt, Curiosity has far surpassed the initial mission requirements, originally intended to last just two years.

This exploration has not come without a cost though, as the rover’s wheels have taken considerable damage after traversing 28 km – much of which has been over rocky terrain. However, Curiosity’s mission team has been able to slow the degradation of the wheels.

Measures are being taken to try to drive on smoother terrain, and the team even made an algorithm to adjust the speed of Curiosity’s wheels depending on the rocks it’s climbing. The mission team now also commands the rover to use its Mars Hand Lens Imager (MAHLI) instrument located on its robotic arm to image the wheels after every 500 meters (1,640 feet) of driving. 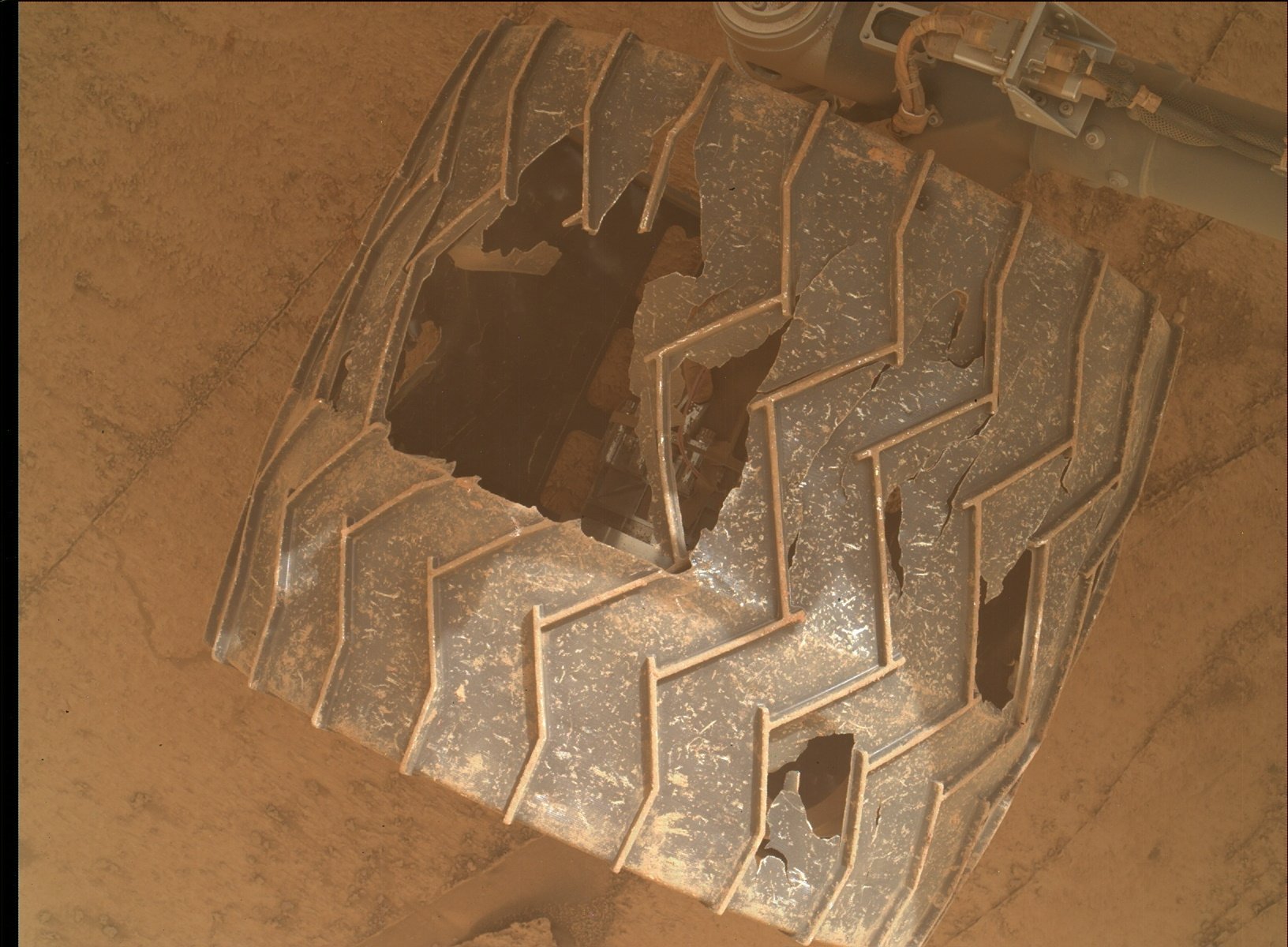 An image of one of Curiosity’s wheels, showing the intense degradation after a decade of driving on the Red Planet. (Credit: NASA/JPL-Caltech/MSSS)

Despite the wear and tear on Curiosity’s wheels, the mobile science laboratory continues to drive, including climbing 612 meters (2000 ft) in elevation since landing as the rover continues to ascend Mount Sharp.  This elevation change has allowed the science team to investigate younger rocks and rock layers that help shed light on Mars’ watery past.

“We no longer see the lake deposits that we saw for years lower on Mount Sharp,” said Ashwin Vasavada, Curiosity’s project scientist.

This change comes as Curiosity has been driving through a transition zone for the past year, where the rover is now seeing fewer clay minerals and more sulfate.

Curiosity is not only unlocking the secrets of Mars’s past. Throughout its time on Mars, the rover has constantly been taking radiation measurements using its Radiation Assessment Detector (RAD) instrument. Measuring the amount of radiation the rover is exposed to is vital in helping scientists figure out the best ways to protect astronauts on future missions to the Red Planet. 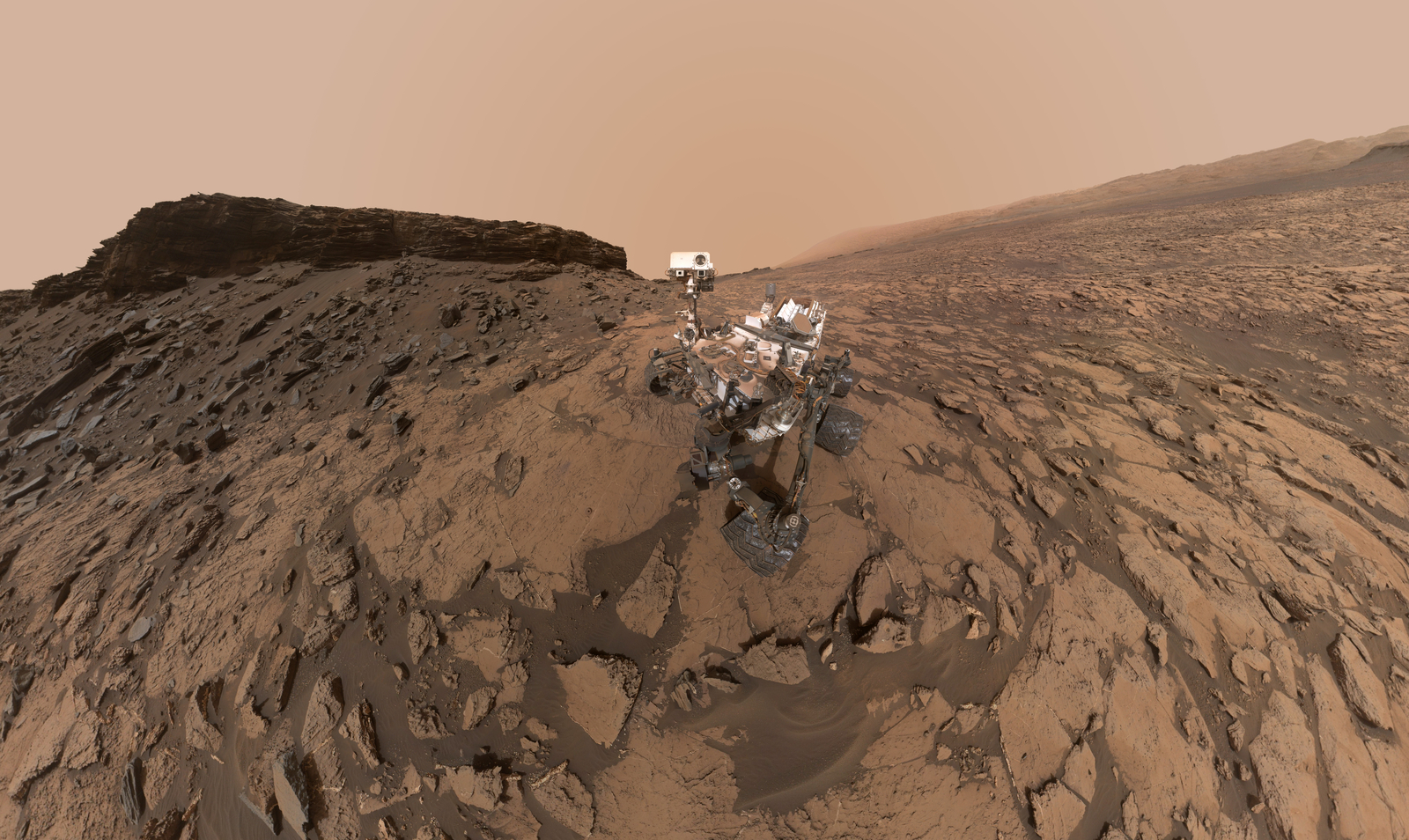 A wide field-of-view selfie from Curiosity showing the site around Murray Buttes, which is visible in the background to the left. (Credit: NASA/JPL-Caltech/MSSS)

Such data opens up the possibilities of potentially using Martian regolith to protect habitats from radiation on the surface, or using the surface itself by building habitats in Martian lava tubes.

Curiosity also measured the total organic carbon in Martian rocks for the first time, in a sample taken from “Yellowknife Bay” in 2014. Despite taking place in 2014, the data required years of analysis to understand the full context.

“We found at least 200 to 273 parts per million of organic carbon. This is comparable to or even more than the amount found in rocks in very low-life places on Earth, such as parts of the Atacama Desert in South America, and more than has been detected in Mars meteorites,” said Jennifer Stern of NASA’s Goddard Space Flight Center.

Organic carbon is the basis for organic molecules. The presence of these organic molecules does not necessarily indicate life, as they can be formed through natural processes. However, their presence – along with previous evidence of Mars’ habitably in the past – is interesting to many scientists. 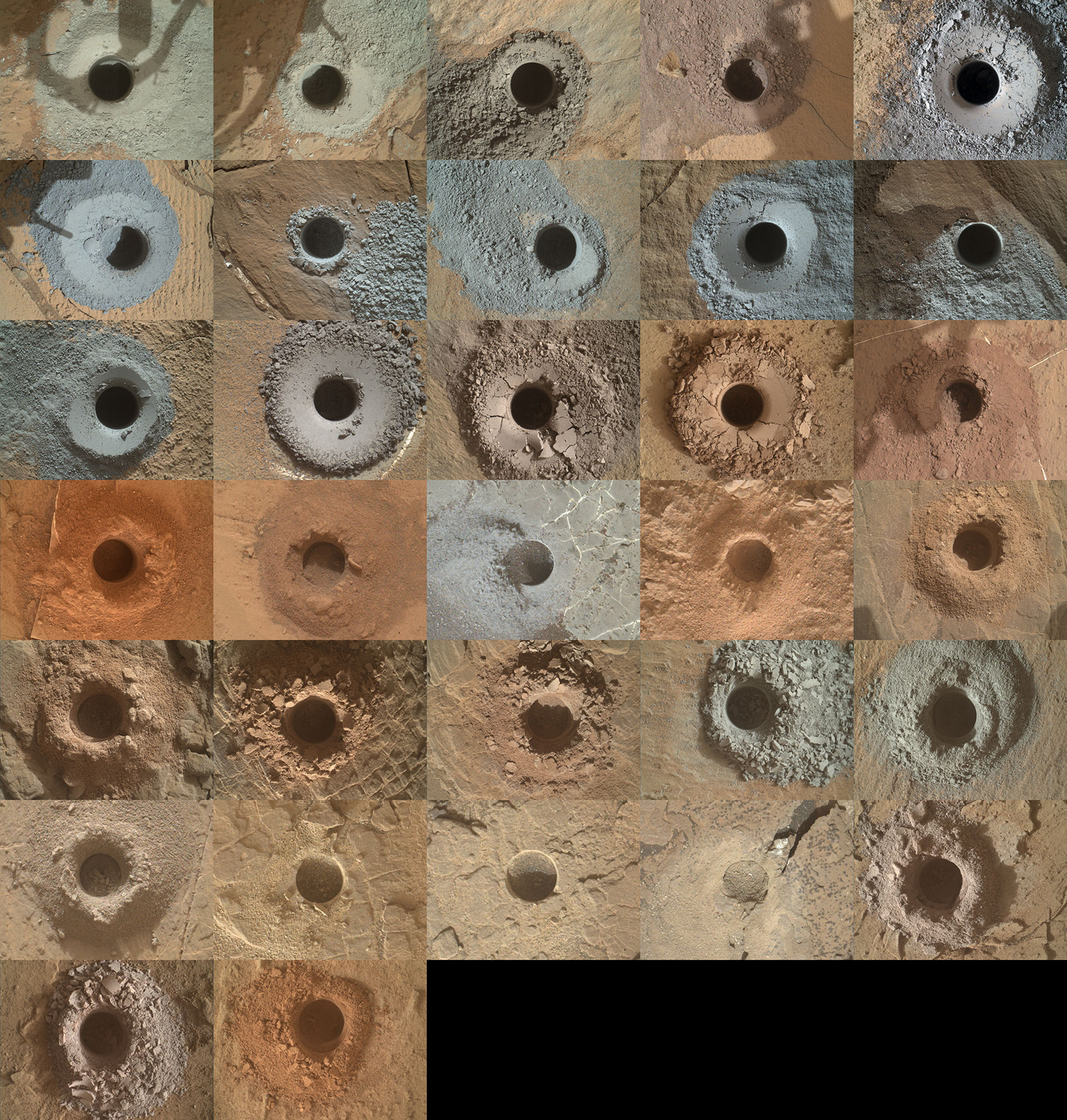 Some of the 35 holes Curiosity has drilled in Gale Crater. (Credit: NASA/JPL-Caltech/MSSS)

The rover obtained these materials using its drill located on the robotic arm of the vehicle. Once a rock target is selected, the drill can take a sample up to two inches deep inside of the rock. During the drilling process, the rock is ground up into a powder and is then able to be transferred to the Sample Analysis at Mars (SAM) instrument.

SAM then heats the sample to about 1,500°F (850°C) and combines it with oxygen to convert the organic carbon into CO2. The rover then measures the amount of CO2 created, which is used to determine exactly how much organic carbon was present in the sample.

During the past decade, Curiosity has returned 3,102 gigabytes of data and drilled 35 samples. This data has yielded 883 scientific papers so far. While the rover is now dealing with wheel wear and less power from its Radioisotope Thermoelectric Generator (RTG), the robotic vehicle has exceeded expectations and is expected to continue making scientific discoveries for years to come.

(Lead photo: One of the many “selfies” captured by Curiosity during its mission on Mars. Credit: NASA/JPL-Caltech/MSSS)