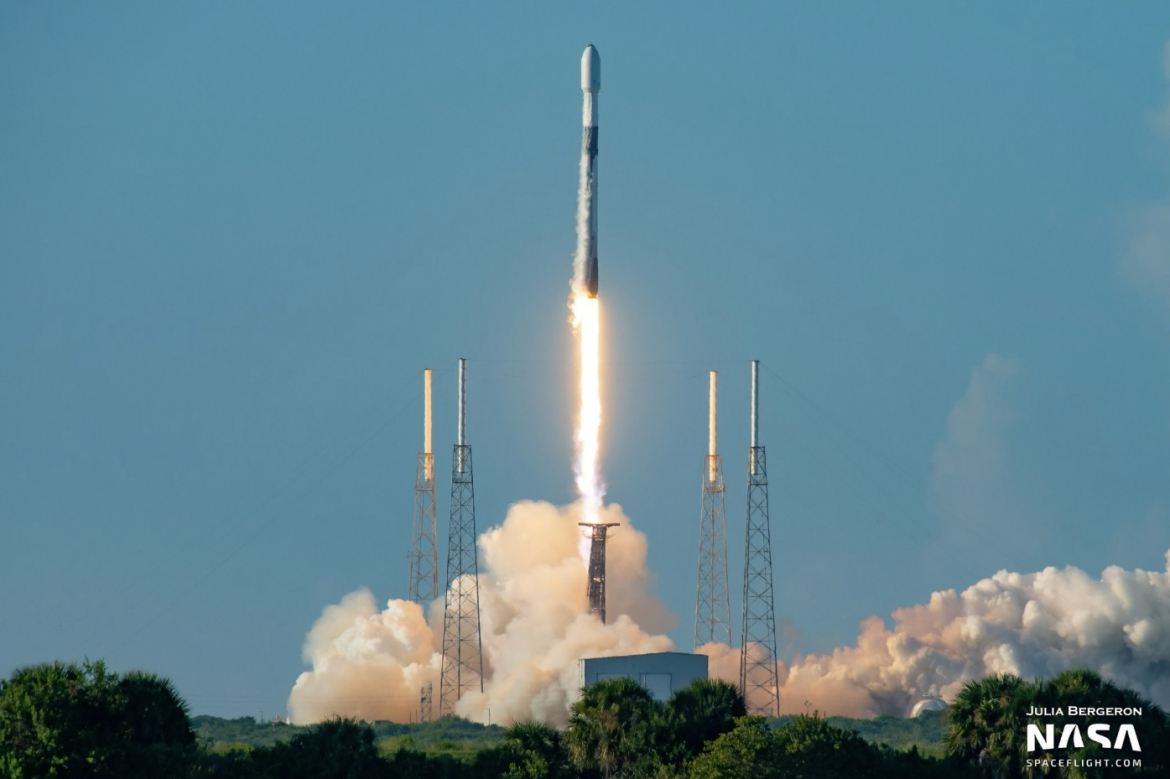 Thursday’s launch was the 34th mission of what is already a record-breaking year for SpaceX in 2022. The company has maintained a cadence of one launch every 6.29 days. SpaceX can keep this launch rate up by using flight-proven first-stage boosters and payload fairings. On Thursday’s mission, SpaceX used B1052-6, a flight-proven booster that already had five missions under its belt.

Danuri is B1052’s sixth overall mission since its introduction in April 2019. B1052 was originally built as a side booster for the Falcon Heavy rocket and first flew alongside its twin, B1053, on the Arabsat-6A mission. The same pair of boosters later supported the STP-2 mission in June 2019. The two boosters were then placed into storage. In December 2021 B1052 was spotted out of storage, having been converted to a Falcon 9 core and using the interstage from B1049.

In late January 2022, B1052 supported the COSMO-SkyMed Second Generation FM2 (CSG-2) mission as its first flight as a Falcon 9 booster. B1052 has since supported the Starlink Group 4-10 and Group 4-18 missions in March and June. SpaceX recovered the booster again following Thursday’s flight, after which B1052 will be reconfigured back to a Falcon Heavy side booster to rejoin B1053-3 on the ViaSat-3 Americas mission.

Following the Starlink Group 4-18 mission, B1052 was taken off SpaceX’s Autonomous Spaceport Drone Ship (ASDS) Just Read the Instructions (JRTI). B1052 was transported to SpaceX’s HangerX facility at Roberts Road for refurbishment. It has taken 79 days to turn the booster around for the Danuri launch.

After B1052 completed its refurbishment, it was transported to the Horizontal Integration Facility (HIF) at Space Launch Complex 40 (SLC-40). Here, B1052 was mated with its second stage and the payload, encapsulated within the fairing. The rocket was placed on the Strongback Transporter Erector (T/E). One day before liftoff the full stack and the T/E were rolled out to the launch pad and raised to their launch position.

KARI has also sought to develop rockets to provide South Korea with its own independent access to space. The Naro-1, or Korea Satellite Launch Vehicle 1 (KSLV-1), was developed in partnership with Russia, incorporating a first stage derived from the Russian Angara rocket, achieving a successful launch on its third and final flight in 2013.

The Korea Pathfinder Lunar Orbiter satellite is making its way to the moon!

Not only was this the 2nd Cape launch of the day, but SpaceX alone is averaging a launch every 6.29 days. That is seriously impressive! #KPLO

The Nuri, or KSLV-2, followed on from Naro-1 but was wholly developed by South Korea. In June 2022 it successfully reached orbit on the second attempt, and South Korea became the 11th country to place a satellite into orbit with a homegrown rocket.

With experience operating multiple satellites in low Earth orbit (LEO) and geostationary orbit (GEO), KARI has grown confident in its ability to operate in space. In 2013, KARI began a long-term plan for space development that would allow it to explore past Earth orbit, which included the Korean Lunar Exploration Program (KLEP).

KARI and NASA began talks to cooperate on a lunar spacecraft. These talks continued until December 2016 when the two agencies signed the Cooperation Implementation Agreement for Danuri. As a part of the agreement, KARI would be the primary lead with NASA providing support to the mission.

For Danuri, NASA provided an instrument while supporting the mission design, communications, tracking, and navigation using its deep-space ground stations. KARI, as the primary lead, provided the spacecraft and five of the six instruments. The two will form a joint science team to conduct scientific research using the data collected from the mission. In 2021, NASA assigned nine scientists to take up roles in the teams working on Danuri’s instruments.

Construction of the Danuri spacecraft began in 2016. By 2021, all of its instruments were installed and in October of that year, the spacecraft completed construction. Like other spacecraft, Danuri had to undergo extensive pre-launch testing, completing its environmental testing in April 2022.

To support Danuri and its future lunar missions, KARI built new ground support equipment, including a new deep-space antenna. NASA has also carried out testing of its Deep Space Network to support the mission.

The name Danuri was selected for the mission in May 2022, after a nationwide competition was held to name the spacecraft. Danuri is an amalgamation of the words Dal, meaning Moon, and Nuri, meaning enjoy.

SpaceX was selected to launch Danuri in December 2017. It follows on from several South Korean missions previously launched aboard SpaceX’s Falcon 9 rocket, including Koreasat-5A in October 2017 and ANASIS-II in July 2020.

On July 5, Danuri was moved from its manufacturing and testing facility to the Incheon International Airport in preparation for delivery to the launch site. The satellite arrived at Cape Canaveral Space Force Station (CCSFS) on the morning of July 6. Once in Florida, it underwent final inspections, preparations, and propellant loading for launch before being encapsulated in Falcon 9’s 5.2-meter diameter payload fairing.

The encapsulated payload was transported to the HIF at SLC-40 and placed on the Falcon 9 stack. This was rolled out to the launch pad, where the final preparations will take place before launch.

The final stages of the countdown for Danuri’s launch began at T-38 minutes. The Launch Director (LD) conducted a Go/No-Go poll to begin propellant loading. Three minutes later, the automated launch sequence started, with propellant loading also commencing. RP-1 kerosene fuel was loaded into both stages of the rocket with the first stage also being filled with liquid oxygen (LOX).

RP-1 loading on the second stage of the rocket completed at T-20 minutes, with LOX loading for this stage beginning four minutes later.

Seven minutes before launch, the nine Merlin-1D engines on the first stage began to chill down using LOX. Chilling the engines ensures there are no thermal shocks at ignition. The T/E retracts to its pre-launch position of 88.2 degrees at T-4 minutes and 30 seconds.

With a minute left in the count, two major events take place. First, the flight computers enter their startup sequence, taking over the countdown. Second, Falcon 9’s tanks begin to pressurize to flight levels. The LD gives the final “Go” for launch at T-45 seconds.

At T-3 seconds, the nine first-stage engines are commanded to ignite. A second later, the engines ignite and then begin a final health check. Once the engines are verified to be healthy and producing full thrust, the hydraulic hold-down clamps and the T/E retract, and Falcon 9 lifts off. 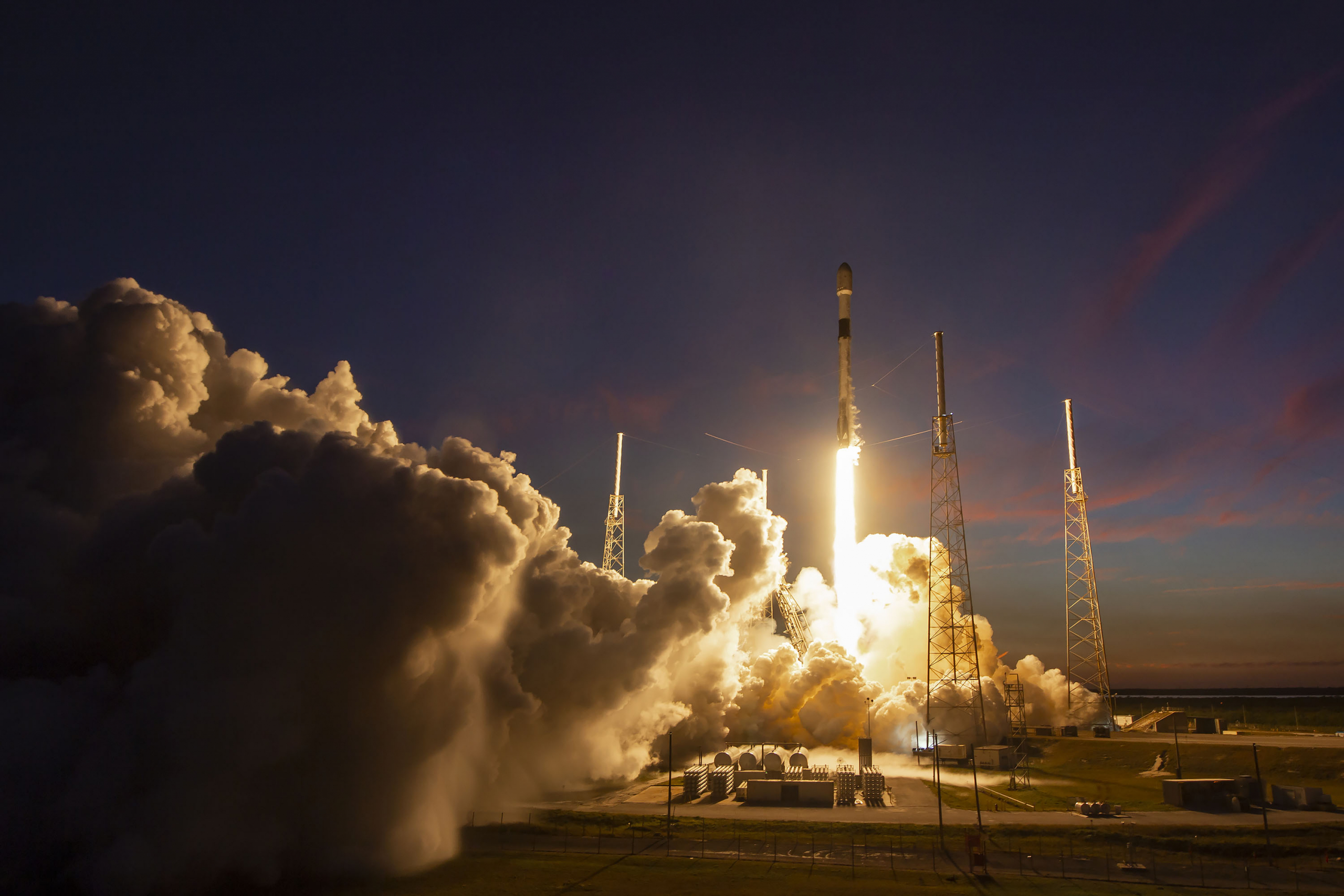 A few seconds after liftoff, Falcon begins a pitch maneuver to put itself on the planned launch track. One minute and 12 seconds into the flight, Falcon 9 passes through Max-Q, the point of maximum dynamic pressure, which is the point where the aerodynamic stresses on the rocket will be at their peak.

After burning for about two minutes and 33 seconds, the nine first-stage engines shut down in an event designated Main Engine Cutoff (MECO). A few seconds later, the two stages separate and the second stage ignites its single Merlin Vacuum (MVac) engine.

Just under a minute into the second stage’s burn, the payload fairing separates, exposing Danuri to space for the first time. The two payload fairing halves are designed to be reusable, descending under parachutes and splashing down into the ocean to be recovered.

Stage two continued to burn for five minutes until reaching its planned low-Earth parking orbit at an altitude close to 300 km.

While the second stage is performing this burn to reach orbit, the first stage continues to follow its ballistic trajectory towards Just Read The Instructions. Its four titanium grid fins deploy moments after stage separation. The stage coasts for a few minutes before three of its nine engines reignite for the entry burn. This roughly 15-20 second firing helps to protect the stage from the aerodynamic forces from reentry, also serving to slow it as it passes back into Earth’s atmosphere.

From there the first stage continues to slow down as it descends unpowered, passing back through the transonic region. With the stage at an altitude of two kilometers and a speed of roughly 235 m/s, a single engine ignites for its landing burn. This 20-30 second burn slows the stage down for a gentle landing aboard JRTI. This marked the 60th consecutive and 134th overall landing for a Falcon 9 first stage. JRTI will take the booster back to Port Canaveral to be refurbished for a future flight.

Falcon 9 B1052-5 lands on SpaceX drone ship "A Shortfall Of Gravitas".

After reaching its parking orbit, the second stage coasted before performing its second burn. The MVac engine reignited to conduct its trans-lunar injection burn. This placed Danuri on course to use a Weak Stability Boundary/Ballistic Lunar Transfer (BLT) method to reach the Moon.

After another coast phase, Falcon released the spacecraft to begin its journey to the Moon. Using the BLT, its orbit will have reached an apogee near the Earth/Moon Lagrange Point 1 (L1). As it approaches L1, the Lunar gravitational pull will help to boost the spacecraft on its way to the Moon. Danuri will use its onboard propulsion to maneuver itself into lunar orbit. The BLT transfer profile is similar to the one being used by NASA’s CAPSTONE mission, which will reach lunar orbit in November.

Once it reaches the Moon, Danuri will complete multiple burns to reach a circular orbit at an altitude of 100 kilometers (subject to a 30 km margin of error) at 90 degrees inclination. This is expected to be completed in December. The 100 km orbit is where Danuri’s year-long primary mission will take place.

The 678-kilogram Danuri spacecraft is equipped with multiple monopropellant thrusters, two solar arrays, and six instruments. Five of these instruments were provided by KARI with the sixth by NASA as part of their cooperation with KARI on this project. 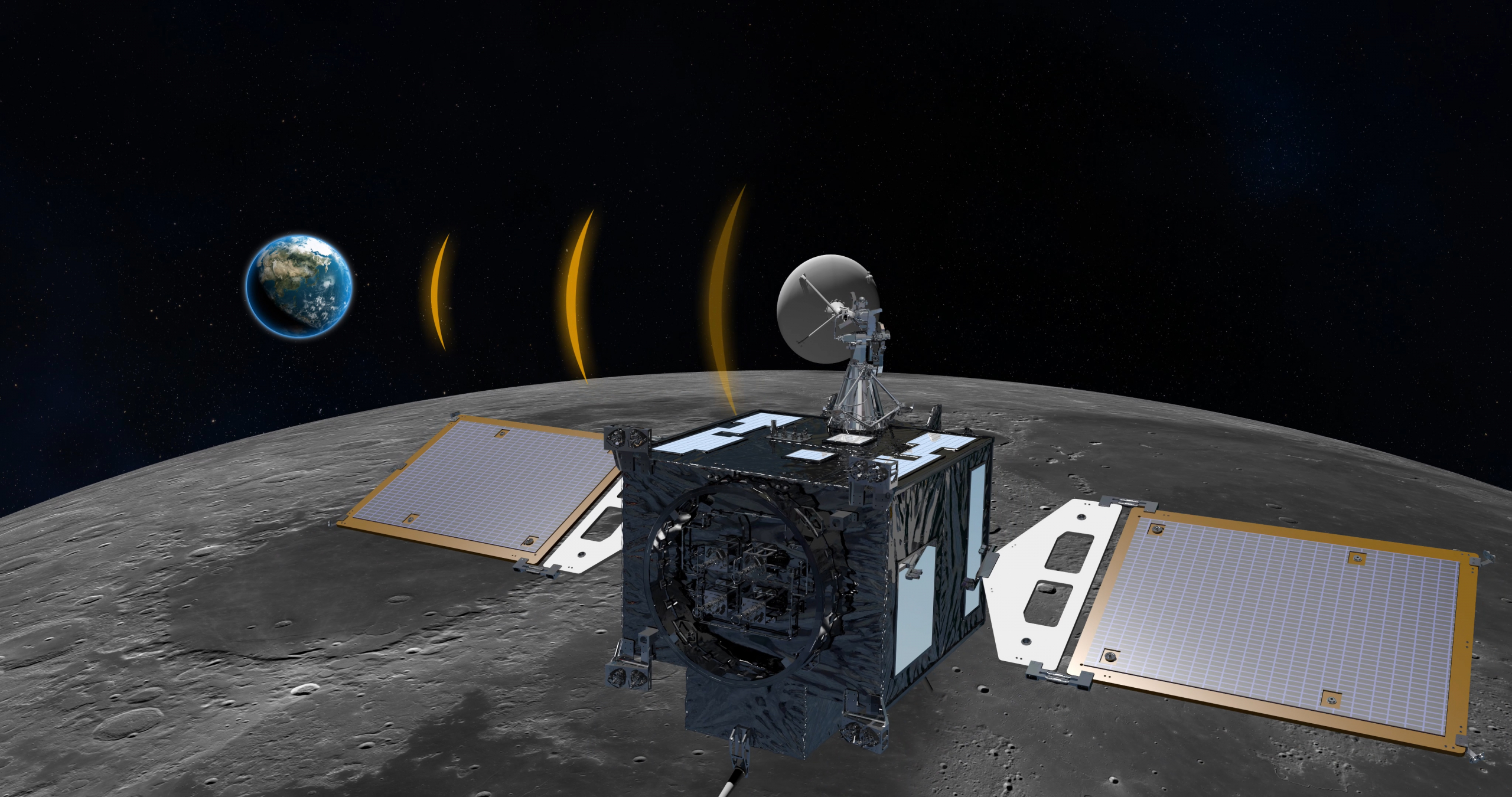 If the mission lasts longer than its planned one-year mission, Danuri’s orbit will be lowered to 70 km for an extended mission. As the first step of South Korea’s multi-step program to explore the Moon, the country will use the lessons learned from Danuri to advance future projects.

Danuri will join NASA’s Lunar Reconnaissance Orbiter (LRO) and CAPSTONE missions in lunar orbit. Together these spacecraft will contribute data to support the Artemis program. South Korea signed the Artemis Accords in 2021 becoming the tenth nation to do so.

Within the decade, KARI will conduct its phase two mission with a lunar orbiter, lander, and rover. For this mission, KARI wants to use an indigenous launch vehicle to support the mission. The launch of Danuri comes just weeks after the first successful flight of South Korea’s Nuri rocket. Nuri will help KARI understand how to design, build, and operate an orbital class rocket to create a larger kind of rocket.

August is shaping up to be an extremely busy month for SpaceX. Following Danuri, six more missions are currently expected before the end of the month. These will all launch Starlink satellites, with four Group 4 launches from the east coast and two Group 3 launches out of Vandenberg Space Force Base on the west coast currently planned.