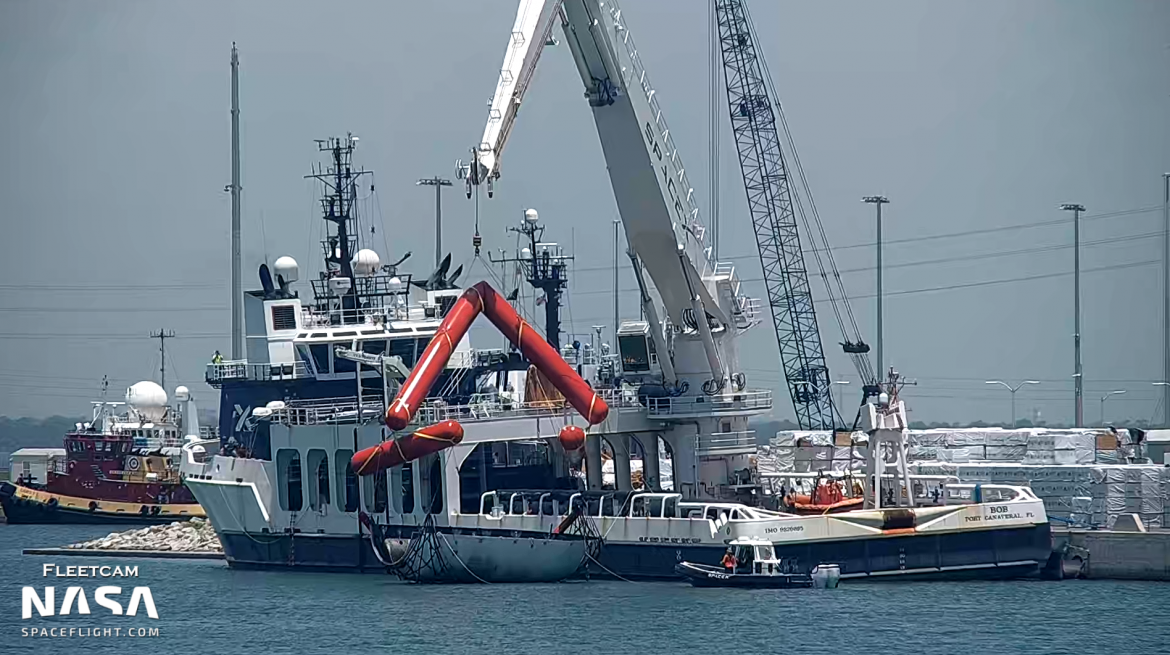 After a year of solid success with Falcon 9 fairing recovery and reuse, SpaceX has once again started tinkering with the recovery operation.

SpaceX’s fairing recovery program has been in development for many years and has evolved into a largely underappreciated, but highly successful, operation. Fairings are now regularly flying on multiple missions in a consistent manner, and it’s rare for a fairing to be recovered in a damaged state or not at all. The current confirmed flight record is six reuses of a fairing half.

Since the introduction of multi-purpose SpaceX vessels Bob and Doug, SpaceX has enjoyed this success in the wake of several years of inconsistency during which time SpaceX pursued catching the fairing with vessels Ms. Tree and Ms. Chief. Having ultimately abandoned the catching method–and Ms. Tree and Chief–the company started using cranes to recover the fairing halves. 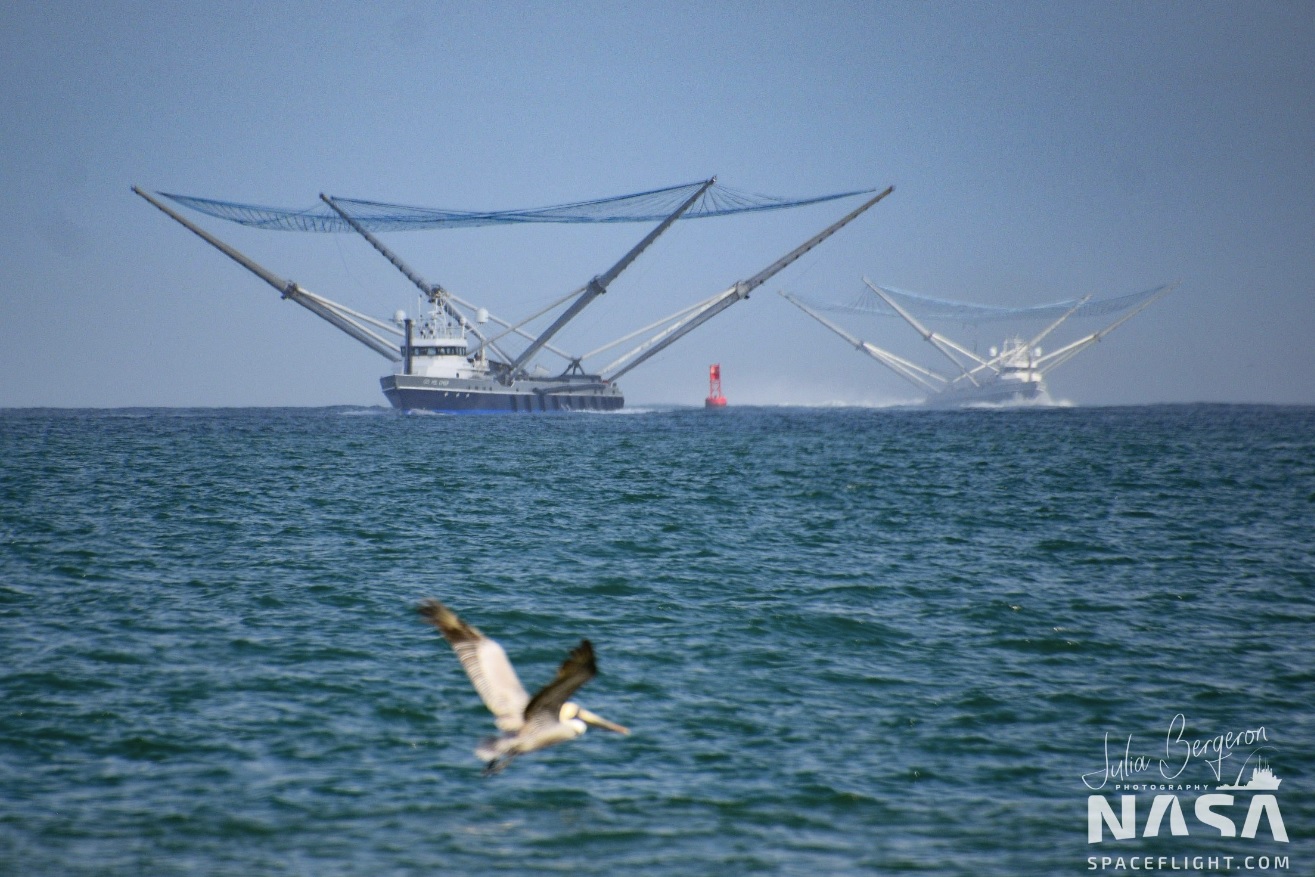 For this to work, SpaceX positioned a vessel with a crane downrange in a pre-determined area. The fairing would descend towards the ocean under parafoil and then make a soft splashdown.

The recovery ship would then move in and deploy a fast boat and the crane. Workers on the fast boat would then rig the fairing to the crane, and it would be lifted onto the ship and brought back to land. Starting with contracted vessels in March 2021, SpaceX ultimately designed their own custom vessels for the task and introduced Bob and Doug in August 2021. 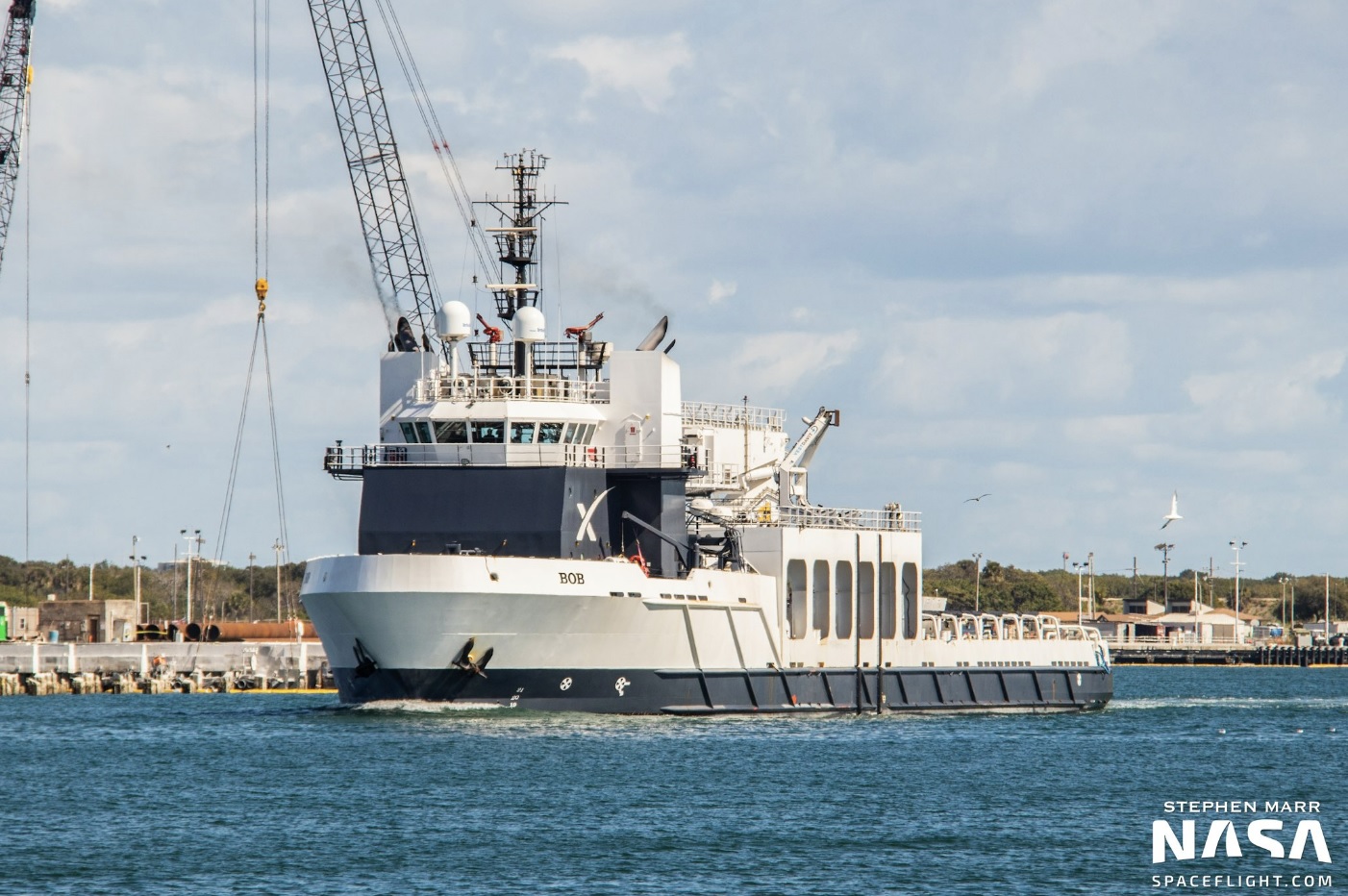 In the last few weeks, SpaceX has started to tinker with the recovery system used by Bob and Doug. A new rig that is hoisted by the cranes on each vessel has been used in a series of faring recovery tests.

The rig being tested appears to compromise three inflatables with a net strung between them. The crane lowers this net down into the water, and the fairing either drifts into the net or is nudged into it with a small support boat.

The use of inflatables to hold up the net might seem like an odd choice, but it is likely to have been designed this way to avoid damaging the fairing if the two were ever to make contact. SpaceX has mounted inflatable cushions onto recovery ships for many years to avoid impact damage during lifting operations.

While the new rig appears to still be in testing and is yet to be used on an operational mission, the reason for the change appears to be clear. By using a net to scoop up the fairing from the water, it eliminates the need for recovery technicians to deploy down to the water to rig the fairing to be lifted in the traditional way–something that might be a difficult and potentially dangerous task in heavy seas.

Between May 2021 and June 2022, SpaceX successfully recovered every fairing half from missions launched from Florida. This success streak ended on July 7, 2022, when only one half was recovered during the Starlink 4-21 mission.

Further to this, on July 24, SpaceX launched the Starlink 4-25 mission and did not attempt to recover either fairing half for the first time since 2019. Support vessel Doug departed Port Canaveral without the fast boats necessary for the operation, and the vessel tracking shows that the ship never left the booster landing zone to sail towards the area where the fairing halves would land.

Starlink 4-25: I don't believe SpaceX clarified this during the webcast but I suspect the company did not plan to recover the fairing halves from the mission today.

Tracking data shows that support ship Doug did not leave the LZ and left port without fast boats used to recover. pic.twitter.com/pLexYdy9A4

Doug returned to Port Canaveral with B1062 and drone ship A Shortfall of Gravitas in tow on July 28, with no fairings onboard. SpaceX presumably allowed these fairings to be destroyed on impact with the ocean with no parafoil to slow it down.

One half of the fairing that flew on this mission may have flown for a seventh time, per community investigating in the NSF forums. If true, this would be a new record for SpaceX. This longevity record could be the obvious reason why SpaceX chose to expend this fairing, deciding it has reached the end of its useful life.

The company is understood to have amassed quite a large collection of fairing halves, owing to the success of its recovery program. These halves will be occupying a significant amount of warehouse space, and as the Falcon 9 fairing fleet ages, it may become a more regular occurrence to see SpaceX expend the oldest ones.