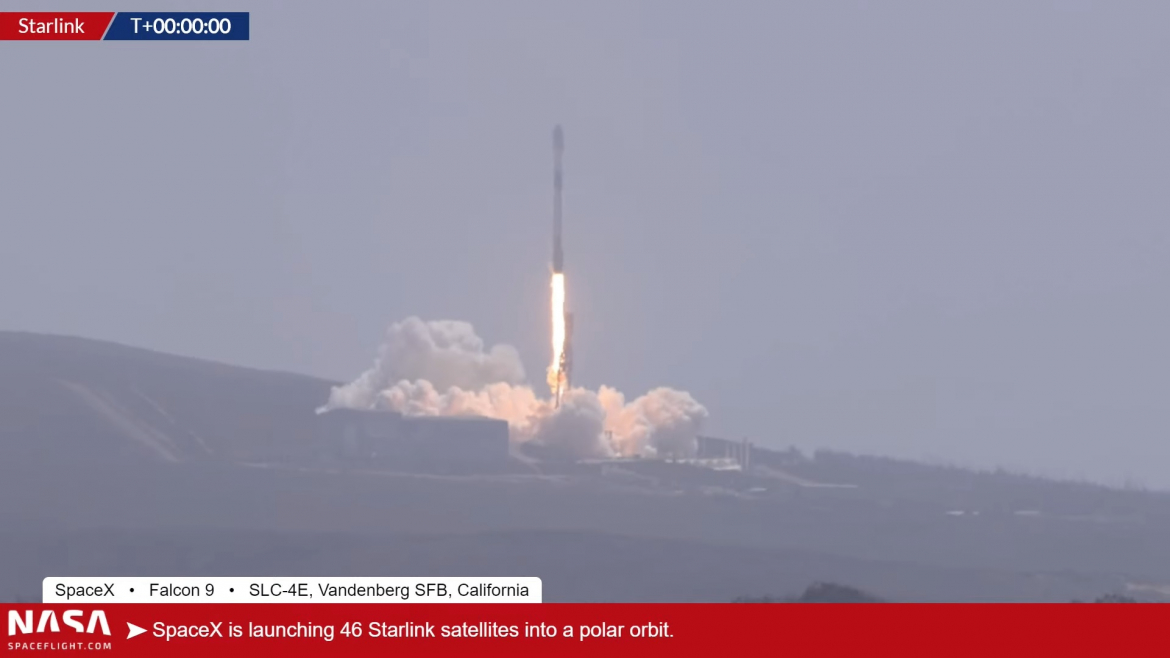 With Friday’s launch marking its 36th mission in 2022, SpaceX continues to break its own records in terms of overall flights and reuse of boosters. With an on-time liftoff, Group 3-3 maintains an average cadence of a launch every 6.22 days for SpaceX this year. It was SpaceX’s third launch of the month, with another four planned for the rest of August.

A major factor in SpaceX’s high launch cadence has been its ability to reuse the first stage of its Falcon 9 rockets. For the Group 3-3 mission, SpaceX used B1061-10, a flight-proven booster making its 10th flight.

As one of the older boosters in SpaceX’s ever-growing fleet, B1061 has already been involved in several historic missions. Its first mission was the Crew-1 launch in November 2020, carrying Crew Dragon Resilience into orbit on the first operational Commercial Crew mission. It next flew the Crew-2 mission before switching to uncrewed launches with SXM-8, CRS-23, and IXPE before its first Starlink mission, Group 4-7, in February 2022. It has since flown the  Transporter-4 and Transporter-5 missions, with its most recent launch coming in June with Globalstar FM15 and a quartet of classified US military satellites.

With Friday’s launch, B1061becomes the fifth booster in SpaceX’s fleet to have flown 10 times. It has taken the booster 635 days since its maiden flight to reach this milestone, the third-fastest to do so out of the five. The fastest so far has been B1060, which made its tenth flight 567 days after its debut and has since increased its tally to thirteen missions.

It has taken SpaceX 55 days to turn B1061 around since its previous mission, which was flown from Cape Canaveral on the East Coast.  Following the Globalstar FM15 mission, B1061 landed aboard the drone ship Just Read the Instructions. After being brought back to shore, the booster was transported across the country to Vandenberg Space Force Base (VSFB). B1061 joins B1063 and B1071 as the three active boosters on the West Coast, following in the footsteps of B1049 and B1051 which were transferred to VSFB for their tenth and eleventh flights respectively in 2021.

With SpaceX looking to ramp up launches from VSFB, B1061’s move increases the number of missions that can be flown. B1071 is currently assigned to the SDA Tranche 0 Flight 1 mission, expected to launch in September, so B1061 and B1063 will be able to support Starlink missions while B1071 is awaiting its flight.

It appears a Falcon 9 is wrapped and ready to ship from Port of Long Beach back to Vandenberg SFB. Perhaps this is B1071 which arrived last week after recovery from the Starlink 3-2 mission?@NASASpaceflight pic.twitter.com/1iglclEhmH

After arriving at Vandenberg, B1061 entered preparations for the Starlink Group 3-3 launch. Within SpaceX’s hangar at Space Launch Complex 4E (SLC-4E), it was placed on the Strongback Transporter Erector (T/E) with its second stage and payload. The completed Falcon 9 stack was rolled out to the pad a day before launch.

Starlink is SpaceX’s low Earth orbit satellite internet constellation that aims to deliver a fast, affordable, and low latency service, particularly in regions where internet access is currently either unavailable or prohibitively expensive.

The process of launching the constellation began in February 2018 with the deployment of the Tintin A, B (Microsat 2A, 2B) test satellites. Since then, they’ve launched a total of 3,009 more satellites across orbital shells 1, 2, 3, and 4. Group 3-3’s launch will bring the total number of Starlink satellites to 3,055.

Shell 1, which uses a 550 km orbit at 53 degrees inclination, was launched solely from Florida across 28 launches. Shells 2, 3, and 4 all include satellites that have been launched from Vandenberg, although Shell 4 launches have primarily taken place from Florida.

Thursday’s launch is the third mission to populate Shell 3, which uses a 560 km orbit at an inclination of 97.6 degrees. The first launches to this shell both took place last month, with Starlink Group 3-1 lifting off on July 10, before Group 3-2 followed 12 days later. With these two launches, 92 of the 348 planned satellites have been launched to Shell 3. Group 3-3 deploys another 46 satellites to bring this total to 138. 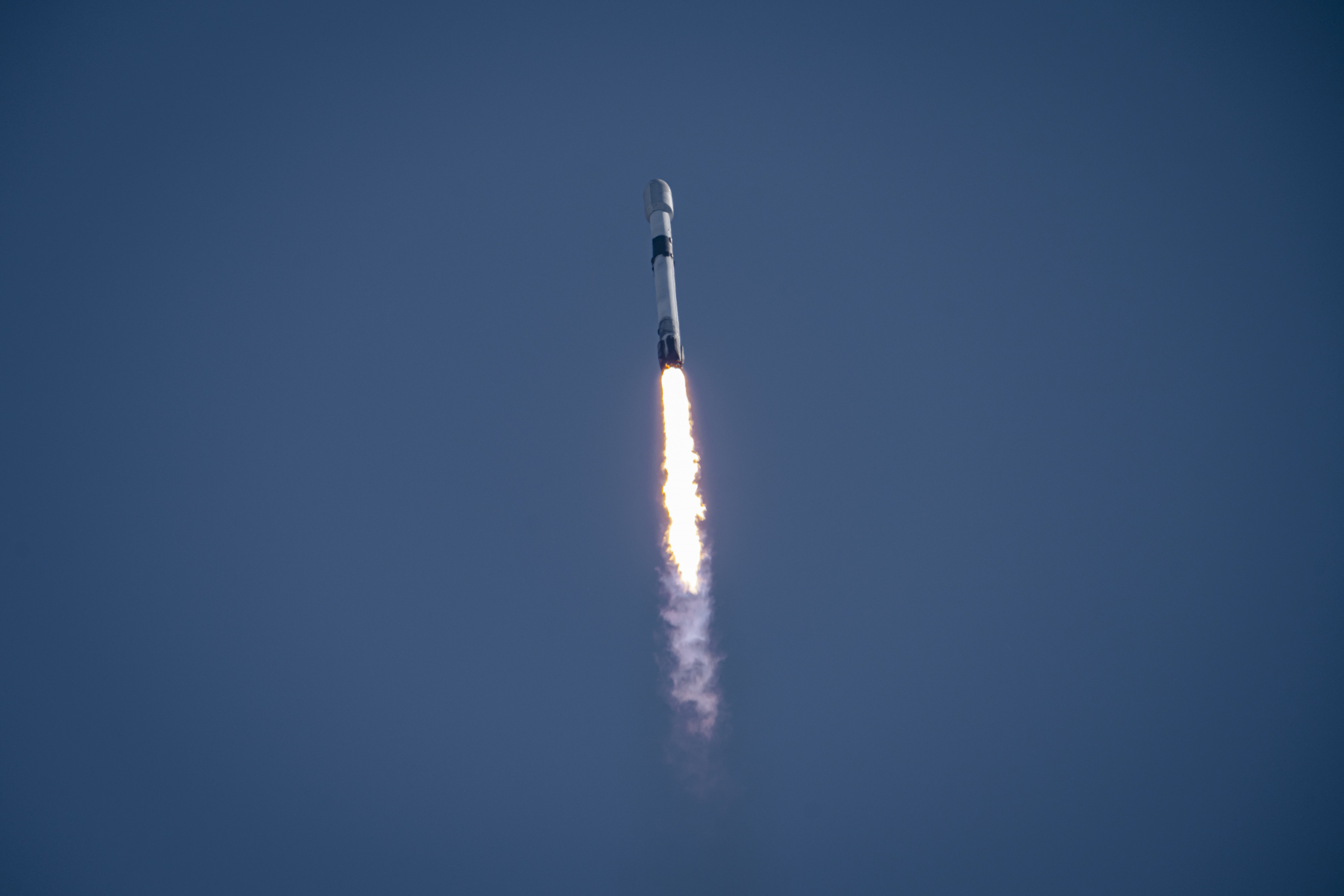 SpaceX launched the Group 2-1 mission in September 2021 with 51 satellites aboard. As of August 2022, it remains the only launch of Shell 2. Shell 5 has not yet begun launching, but it will use an identical orbit to Shell 3 with different orbital planes. Launches for Shell 5 are expected to take place from Vandenberg.

Like other Starlink missions from VSFB, the first stage landed on the Autonomous Spaceport Drone Ship (ASDS), Of Course I Still Love You (OCISLY) after completing its role in Friday’s mission. OCISLY departed port on August 9 with tug Scorpius, taking up a position about 636 km downrange of the launch site. GO Quest departed two days later to support the drone ship, while NRC Quest will be responsible for recovering the rocket’s payload fairing.

The final countdown for Friday’s launch began at T-38 minutes with the Launch Director (LD) conducting an electronic Go/No-Go poll for propellant loading. Once the “go” was given, Launch Control (LC) began the automated launch sequence at T-35 minutes. The first step in this sequence is propellant loading; RP-1 kerosene fuel begins to flow into both stages of the rocket, as well as liquid oxygen (LOX) into the first stage tanks.

Seven minutes before launch, the nine first-stage Merlin 1D engines begin thermal conditioning. Known as engine chill, LOX is used to cool the engines to ensure that no thermal shocks take place when the cryogenic oxidizer flows into the engines at ignition. At T-4 minutes and 30 seconds, the T/E retracts to its launch position of 77.5 degrees. Final propellant loading is completed two minutes before launch. 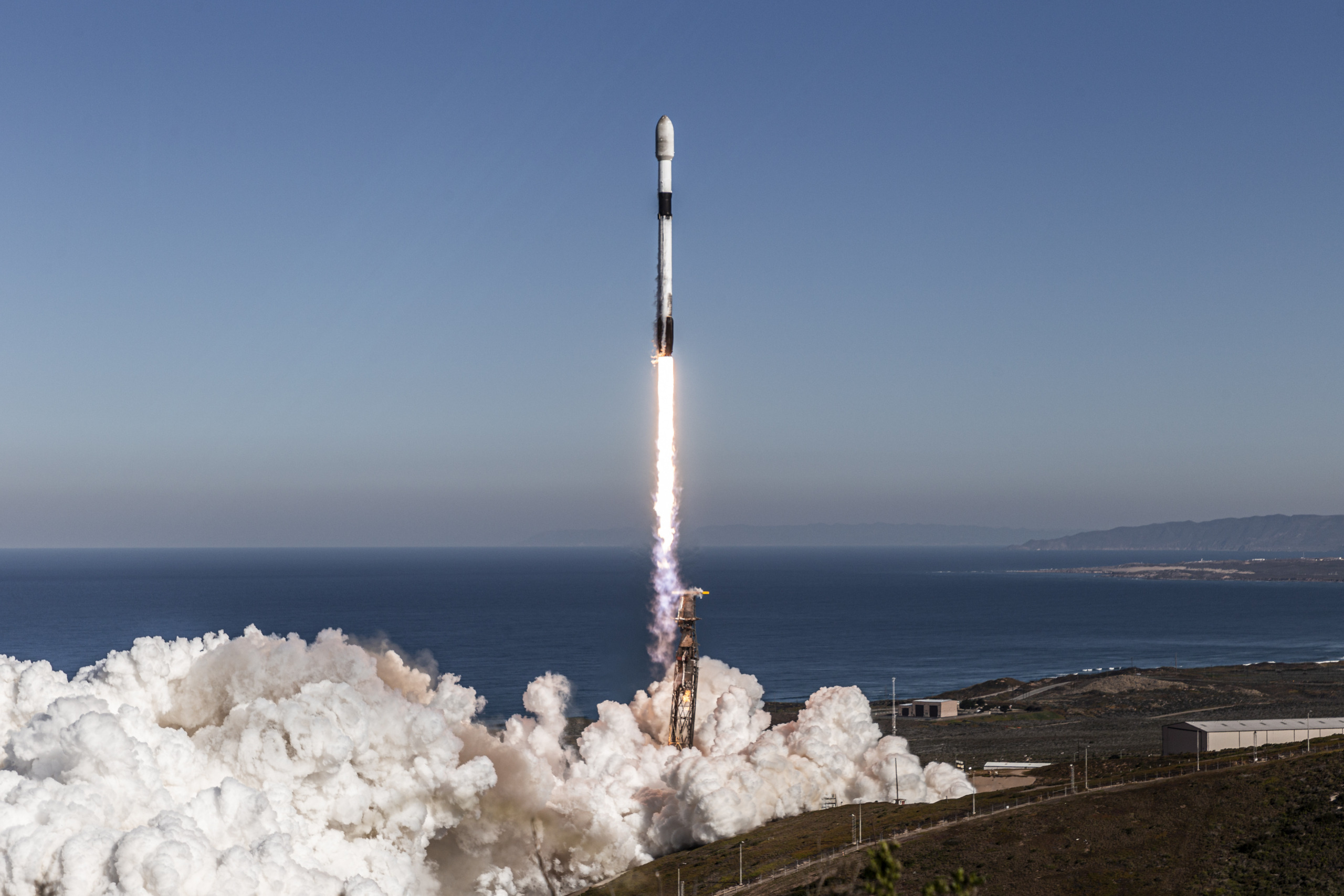 With a minute left in the count, two major events take place. First, the flight computers enter startup, taking over the countdown. Second, Falcon 9’s tanks begin to pressurize to flight levels. The LD gives the final “Go” for launch at T-45 seconds.

At T-3 seconds, the nine first-stage engines are commanded to ignite. A second later, the engines ignite and then began a final health check. Once the engines are verified to be healthy and producing full thrust, the hydraulic hold-down clamps retract, allowing Falcon 9 to lift off.

Shortly after liftoff, the vehicle begins a pitch maneuver and establishes itself on the correct azimuth to reach a 97.6-degree inclination orbit. Falcon 9 reaches the region of maximum dynamic pressure (Max-Q) one minute and 12 seconds into flight. Max-Q is the point where the aerodynamic stress on the vehicle is at its peak.

While the second stage continues towards orbit with the Starlink satellites, B1061 begins its journey back to Earth. Shortly after separating, the booster’s four titanium grid fins deploy. After a four-minute coast, three of the stage’s nine engines ignite for a short entry burn lasting about 18 seconds. This burn helps to protect the stage as it passes back into the atmosphere. 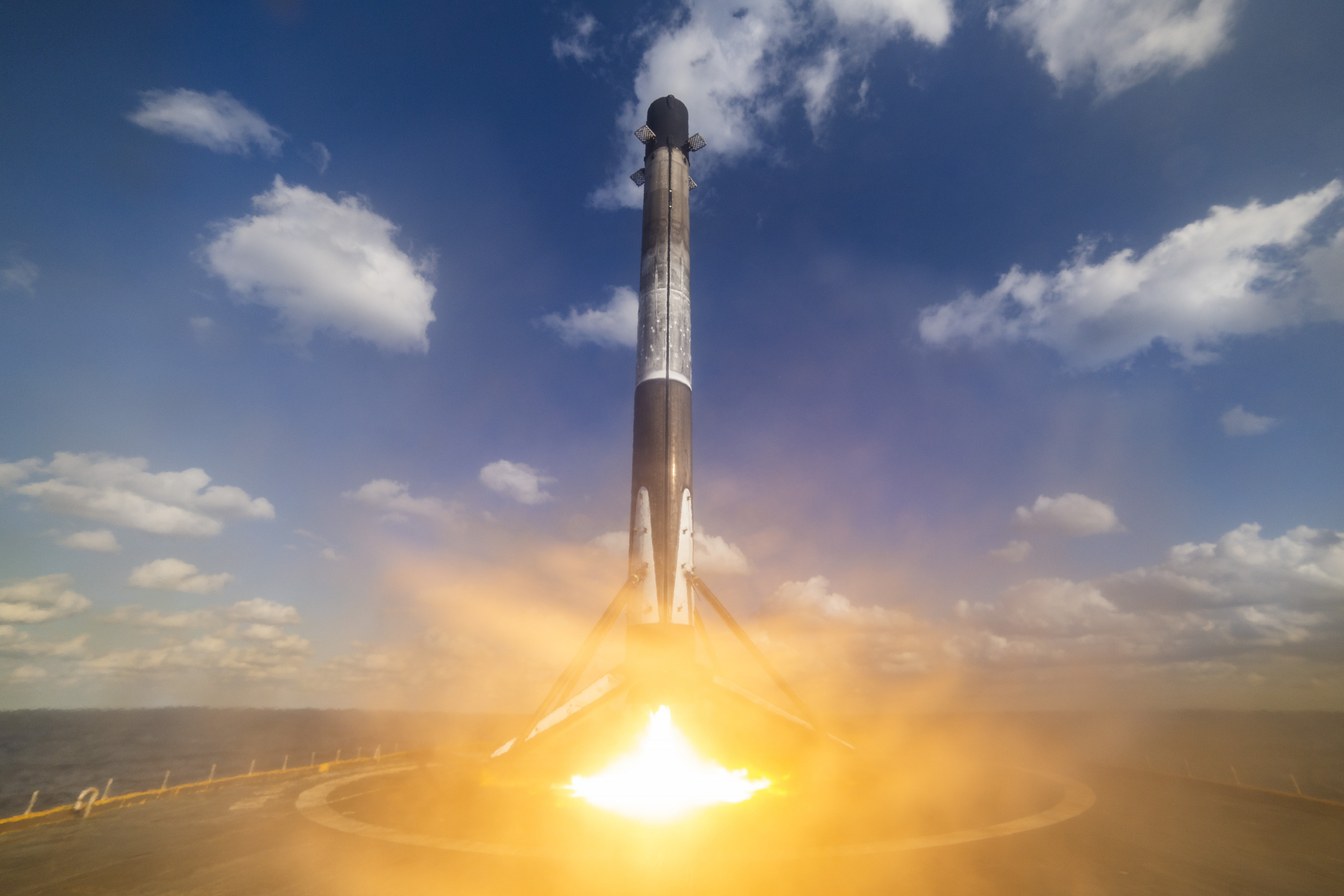 After another short coast, a single first stage engine ignites for its third and final burn. This final burn, also known as the landing burn, slows the stage for a gentle landing on the deck of OCISLY. This was the 62nd consecutive and 136th successful landing of a Falcon 9.

As the first stage is carrying out entry and landing operations,  the second stage continues the primary mission of placing its payload into orbit. Just after stage separation, the payload fairing separates, exposing the 46 Starlink satellites to space for the first time. The MVac engine burns for six minutes to reach an elliptical low-Earth parking orbit.

Once in its initial parking orbit, the second stage coasts for about 46 minutes. After this coast is complete, it restarts its engine for a short, one-second burn to reach a 321-by-308-kilometer orbit at 97.6 degrees inclination. Following another short coast, the stage enters an intentional spin, and the Starlink satellites separate.

After spacecraft separation, the second stage will conduct a third and final burn to deorbit itself. Over the next few weeks, the Starlink satellites will complete their on-orbit checkouts and raise themselves to their 540 km operational orbit.