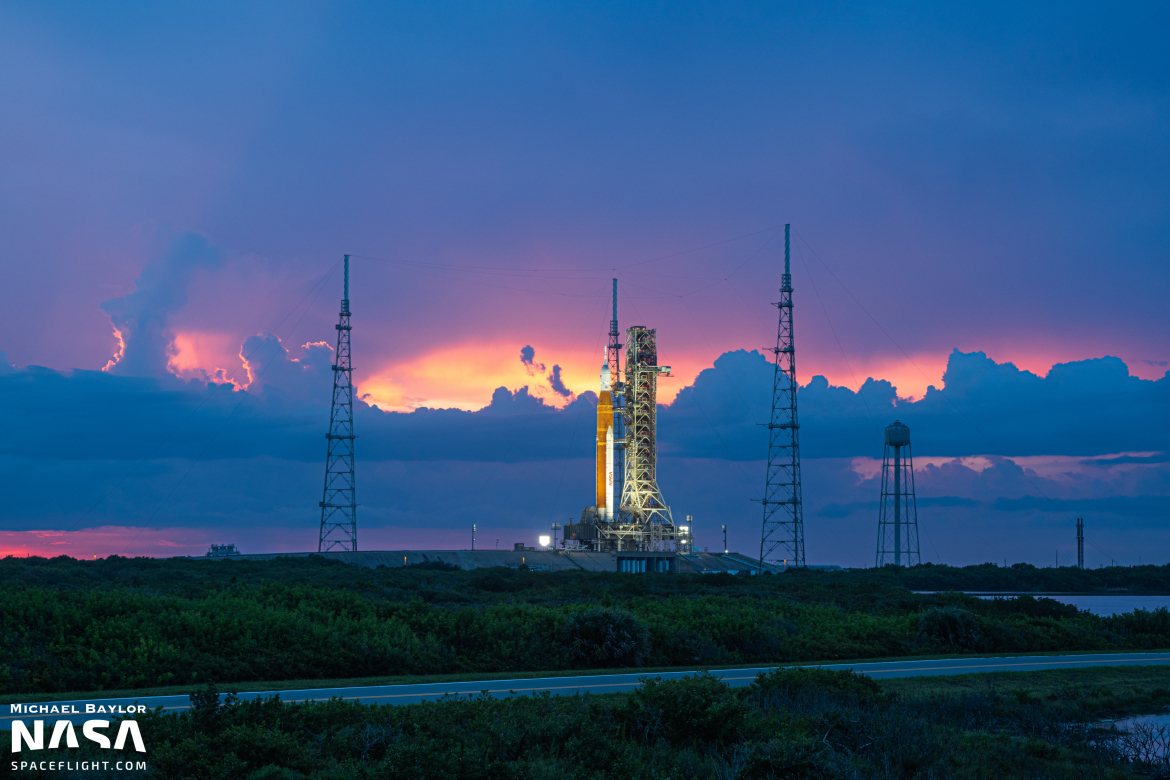 NASA and SLS program managers have developed part of a forward plan for addressing the significant liquid hydrogen (LH2) leak that was observed during the Saturday, September 3rd attempt to launch the SLS rocket and the Artemis I mission from LC-39B at the Kennedy Space Center.

Under the current plan, teams will repair the liquid hydrogen umbilicals and perform a tanking test no earlier than September 17th with the Core Stage and Interim Cryogenic Propulsion Stage (ICPS) to verify fixes to the umbilical seals under cryogenic conditions before an absolutely no earlier than (and unapproved at this time) launch attempt on September 23rd.

The launch date is still highly uncertain as the Eastern Range has not provided their answer for whether or not they will allow NASA to more than double the lifetime of the Flight Termination System (FTS) certification.

Nevertheless, NASA has requested September 23rd and September 27th as launch dates should the seals be fixed, should the tanking test reveal no other issues, and should the Eastern Range approve the FTS waiver.

This FTS carries a certification limit of 20 days — that was waived to 25 days for the previous launch window that closed on September 6th. For a late-September launch attempt, NASA is asking for more than a doubling of the 20-day limit to avoid a rollback to the Vehicle Assembly Building (VAB).

The Core Stage liquid oxygen (left) and liquid hydrogen Tail Service Masts. The liquid hydrogen side has leaked consistently in all four fuelings so far for the wet dress rehearsals and launch attempts. (Credit: NASA)

This requirement from the Range has been known by NASA for the entire decade-plus development of SLS, but the agency chose to design the rocket in a way that the FTS can only be accessed in the VAB, thus necessitating a rollback.

The fix and partial forward path announced Thursday stem from a significant hydrogen leak during fueling operations for the September 3rd launch attempt for the SLS rocket.

During initial fueling operations, slow fill for LH2 produced nominal results; however, after transitioning to fast fill, which takes place under higher pressures, a substantial leak was noted, with hydrogen concentrations upwards of 12%.

The automatic “shut off” limit for LH2 fueling is a concentration that breaches four percent, indicating a leak three times the maximum safety limit.

Numerous attempts to reseat the seal failed, and a scrub was called for the day.

The location of the LH2 leak on September 3rd was different from the one that appeared on the August 29th attempt. That previous LH2 leak was solved during normal troubleshooting operations, and the seals were replaced before the September 3rd attempt. 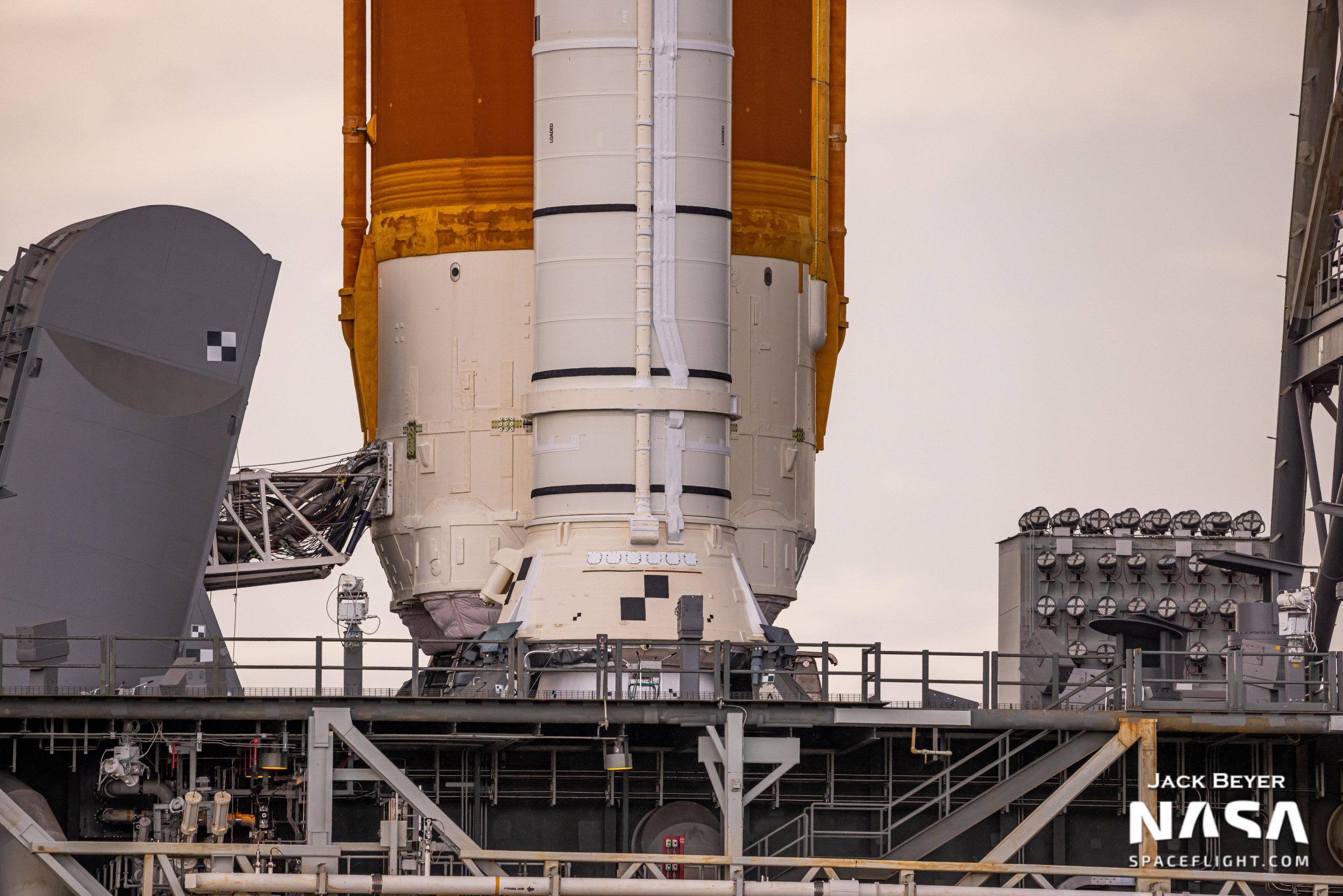 The liquid hydrogen fueling and data connection lines. This is one of two Tail Service Mast connections to the rocket. (Credit: Jack Beyer/NASASpaceflight)

After taking part of the Labor Day holiday weekend off, teams have now established access to the LH2 Tail Service Mast Umbilical (TSMU) and have already demated the ground side of the system from the flight plate.

Replacement of the eight-inch seal, which leaked on the September 3rd attempt, is underway Thursday at the launch pad, with teams noting that they have already identified a notch in the seal that they will be looking at for a possible root cause of the leak.

Additionally, NASA managers for the Exploration Systems Development Directorate as well as Exploration Ground Systems have yet to complete their investigation of the overpressure event from the September 3rd attempt and whether that had any effect on the leaking seal.

The bleed seal replacement will take place Thursday as well providing weather permits. This could be delayed until September 9th for worker safety at the pad during Florida’s afternoon thunderstorms, which are particularly active this week due to a developing low pressure center in the Gulf of Mexico and a nearby frontal system. 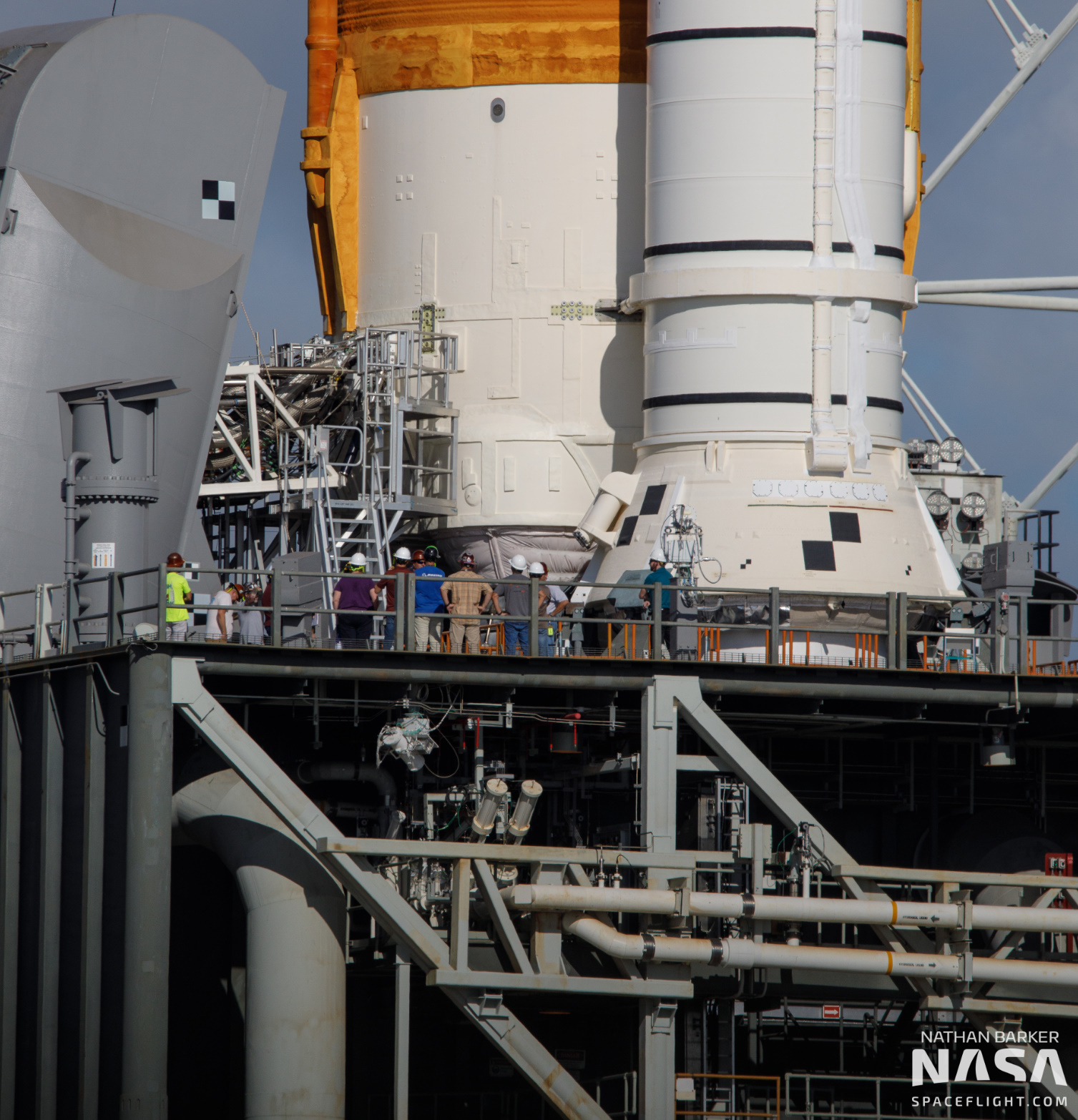 Following replacement of the seals and reconnection of the LH2 TSMU ground plate with the flight plate, ambient leak checks will be performed as is customary before teams head for a cryogenic test no earlier than September 17th.

The tanking test will see teams completely fuel the Core Stage and ICPS of the rocket and will help verify the integrity of all liquid hydrogen system seals.

To date, NASA has attempted to load the SLS rocket with liquid hydrogen four times at Launch Complex 39B, and LH2 leaks have persisted from the LH2 TSMU each time, with one leak in the purge can reappearing on two separate attempts.

Addressing this issue during a press conference Thursday, Mike Folger, Exploration Ground Systems Program Manager at the Kennedy Space Center, expressed confidence in the system while admitting some things will need to be looked at ahead of Artemis II.

“We’ll see if there’s anything we need to do differently,” noted Folger in response to a NASASpaceFlight question regarding the reliability of the LH2 TSMU. 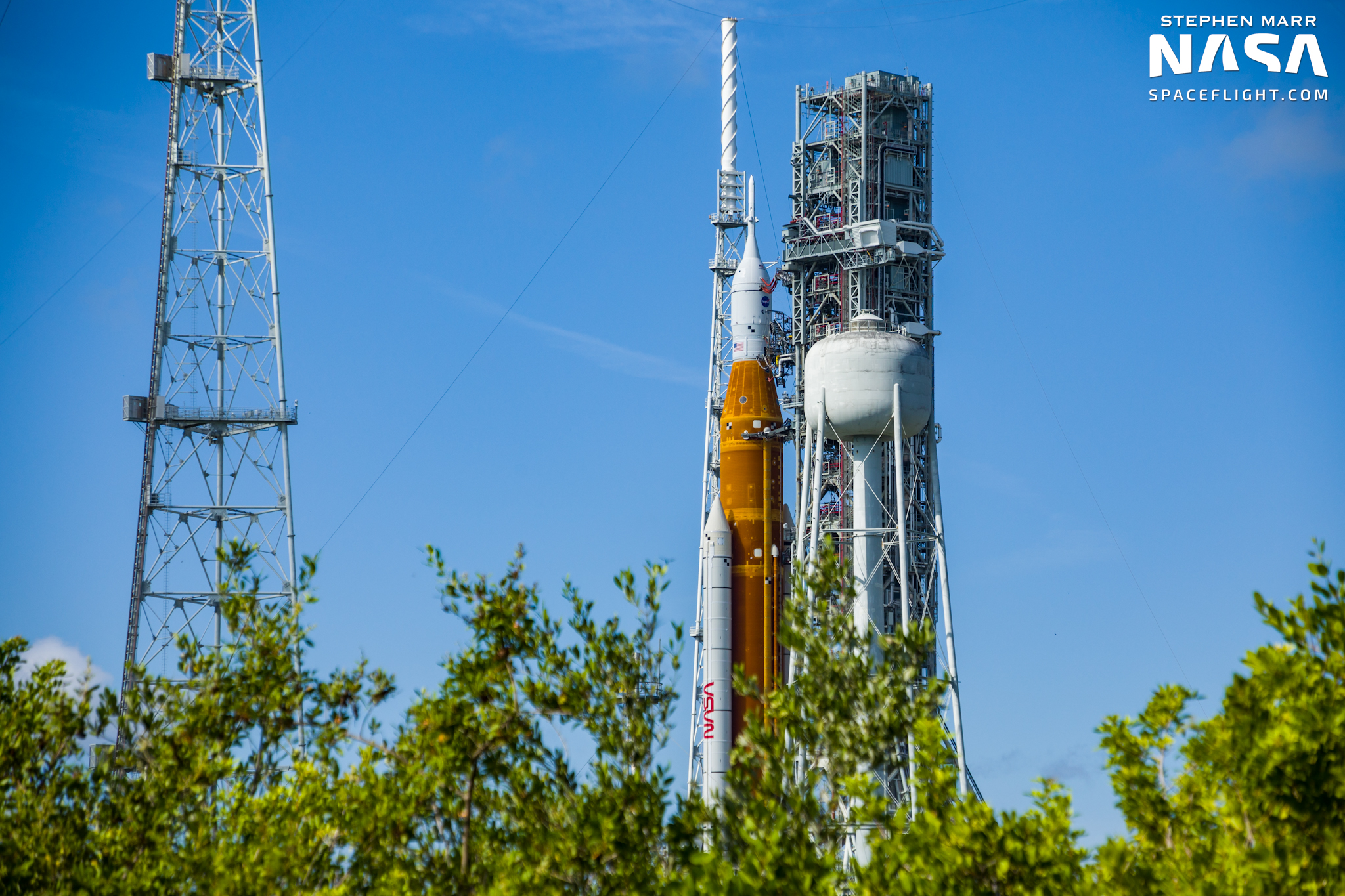 The water tower at LC-39B. This is where the water needed for the sound suppression system is stored. The 400,000 gallon tank is emptied in less than 30 seconds during launch operations. (Credit: Stephen Marr/NASASpaceflight)

“We have the Launch Equipment Test Facility, and we have a mock-up of the TSMU and flight plates, and we do extensive testing. We felt comfortable going into the wet dress and launch that we had a good system,” continued Folger.

“Clearly we’ve had some leaks. There are a lot of things that can drive that. We have new procedures, new flight hardware, new systems. But we’ll be taking a look at that for Artemis II to make sure these don’t repeat.”

However, a major point stressed by NASA officials during Thursday’s update is that this fueling test will not be a wet dress rehearsal and that teams have no plan or desire to leave the vehicle fully fueled for a prolonged period and practice the terminal count – which NASA officials have stated they were not able to fully practice during the wet dress rehearsal attempts earlier this year.

“The point of this is to prove the [LH2] seals are good,” said Folger after repeated questions as to why the agency does not want to do a full wet dress rehearsal.

In addition to seal verification, the fueling test will also verify new pressures within the system that the launch team will utilize going forward following the accidental overpressure event on September 3rd.

Venting is seen from the Core Stage, both from the tank section and engine section, as teams try to fix a hydrogen leak.

At present, NASA does not know if the overpressure had an effect on the LH2 leak seen that day but stressed that no vehicle design criteria were violated by the overpressure.

Officials were also quick to caution that the timeline to the September 17th fueling test is tight and that it would “not be [surprising]” for that to slip a day or two.

With a requested next launch attempt on September 23rd, NASA stressed that the date was only possible if the seal replacement goes to plan and if the fueling test reveals no other issues and if the Eastern Range approves the FTS battery waiver.

Officials on Thursday’s update stated that they needed to be done with the fueling test approximately four days ahead of the first available launch date from a timeline, technical, and data review standpoint.

The launch window on September 23rd runs for 120 minutes and opens at 6:47 AM EDT (10:47 UTC), of which the last 80 minutes would be in daylight while the first part would be in darkness. 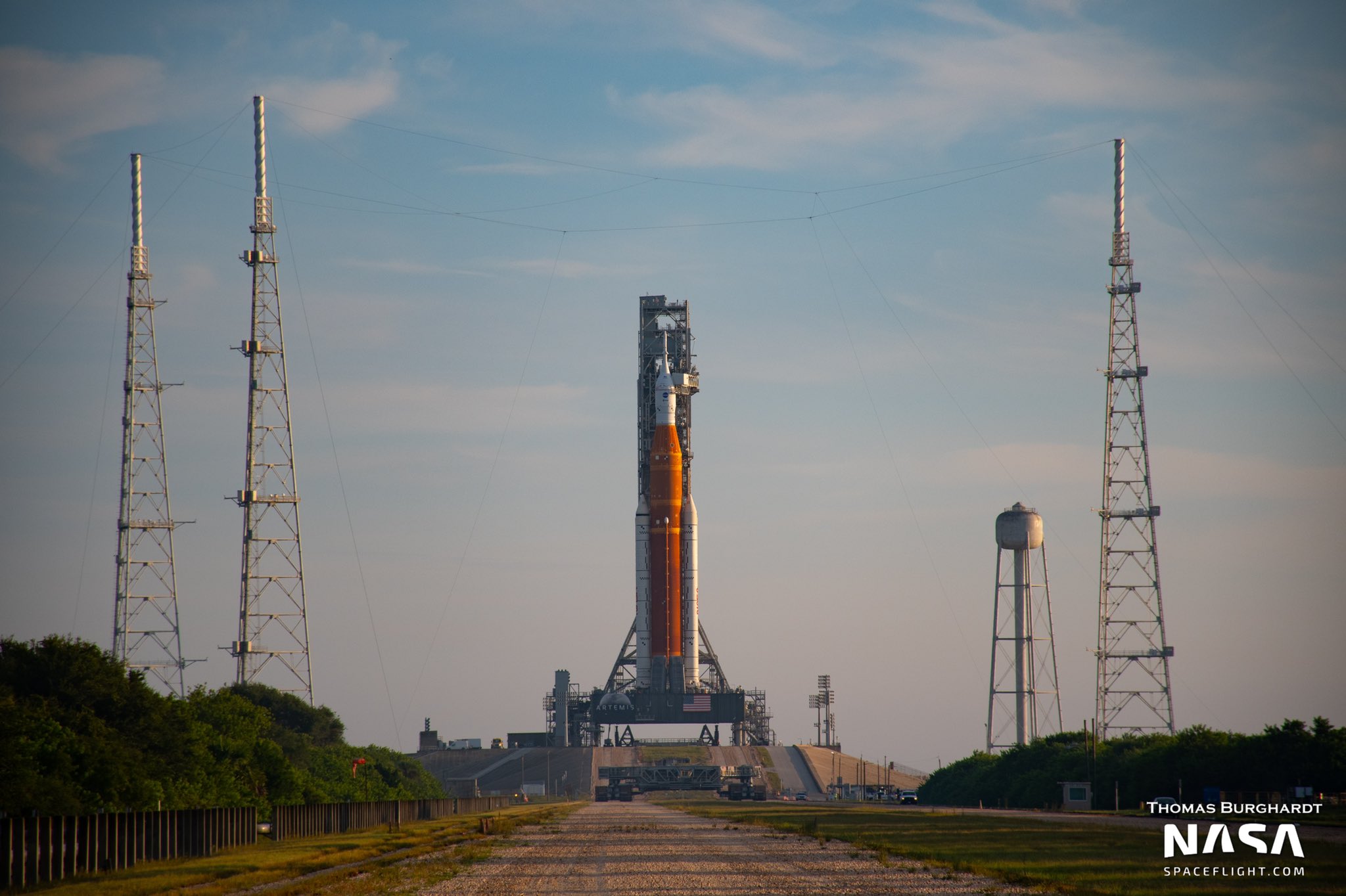 SLS and Orion stand atop LC-39B in August 2022, awaiting the launch of Artemis I. (Credit: Thomas Burghardt for NSF)

Should the 23rd prove unfavorable, unavailable, or result in a scrub, the next availability would be September 27th with a 70-minute long launch window opening at 11:37 AM EDT (15:37 UTC).

These two dates are hand-picked to bend around other major NASA events including the planned impact of the Double Asteroid Redirect Test (DART) mission in late September (which will require a large Deep Space Network monopoly) and the early-October launch of the Crew 5 mission to the International Space Station which will also require Range assets in the days leading up to the liftoff.