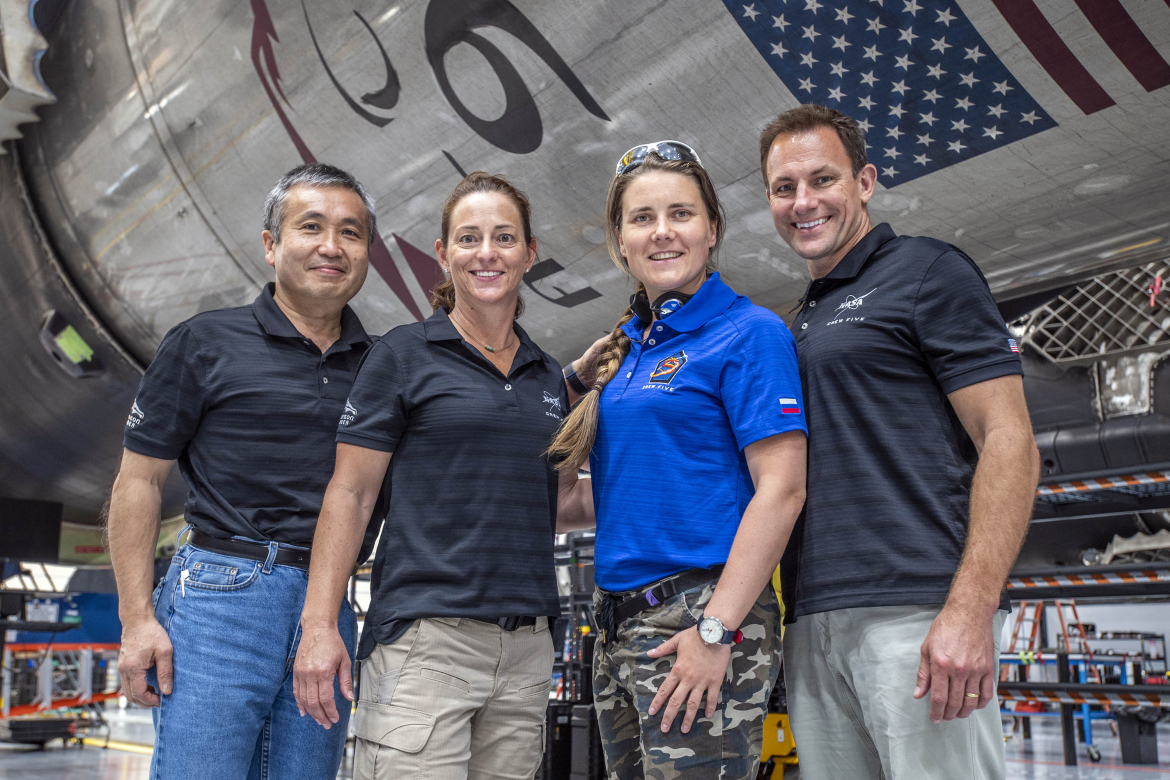 With the launch just weeks away, SpaceX, NASA, and their international partners are in final preparations for the fifth operational Crew Dragon mission. As part of NASA’s Commercial Crew Program (CCP), Crew-5 will be SpaceX’s fifth long-duration crew mission, eighth overall crewed mission, and the first mission with a Russian Cosmonaut.

The crew will consist of a nearly all-rookie crew, with only a single astronaut having flown on a previous mission. NASA astronaut Nicole Anuapu Mann will act as the spacecraft commander, making her the first woman to command Crew Dragon, and  Josh Cassada will act as the spacecraft pilot. Before being assigned to Crew-5, Mann was to fly the Starliner Crew Flight Test (CFT) and Cassada on the first operational Starliner flight. With Starliner’s continuing delays, the two were reassigned to Crew-5 to allow both of them to gain flight experience.

JAXA astronaut Koichi Wakata and Roscosmos cosmonaut Anna Kikina will be joining the crew as Mission Specialists. Wakata will make his fifth spaceflight and fourth overall mission to the ISS. On the STS-92 and Expedition 18/19/20 missions, he became the first Japanese astronaut to work on the assembly of the ISS and complete a long-duration stay. 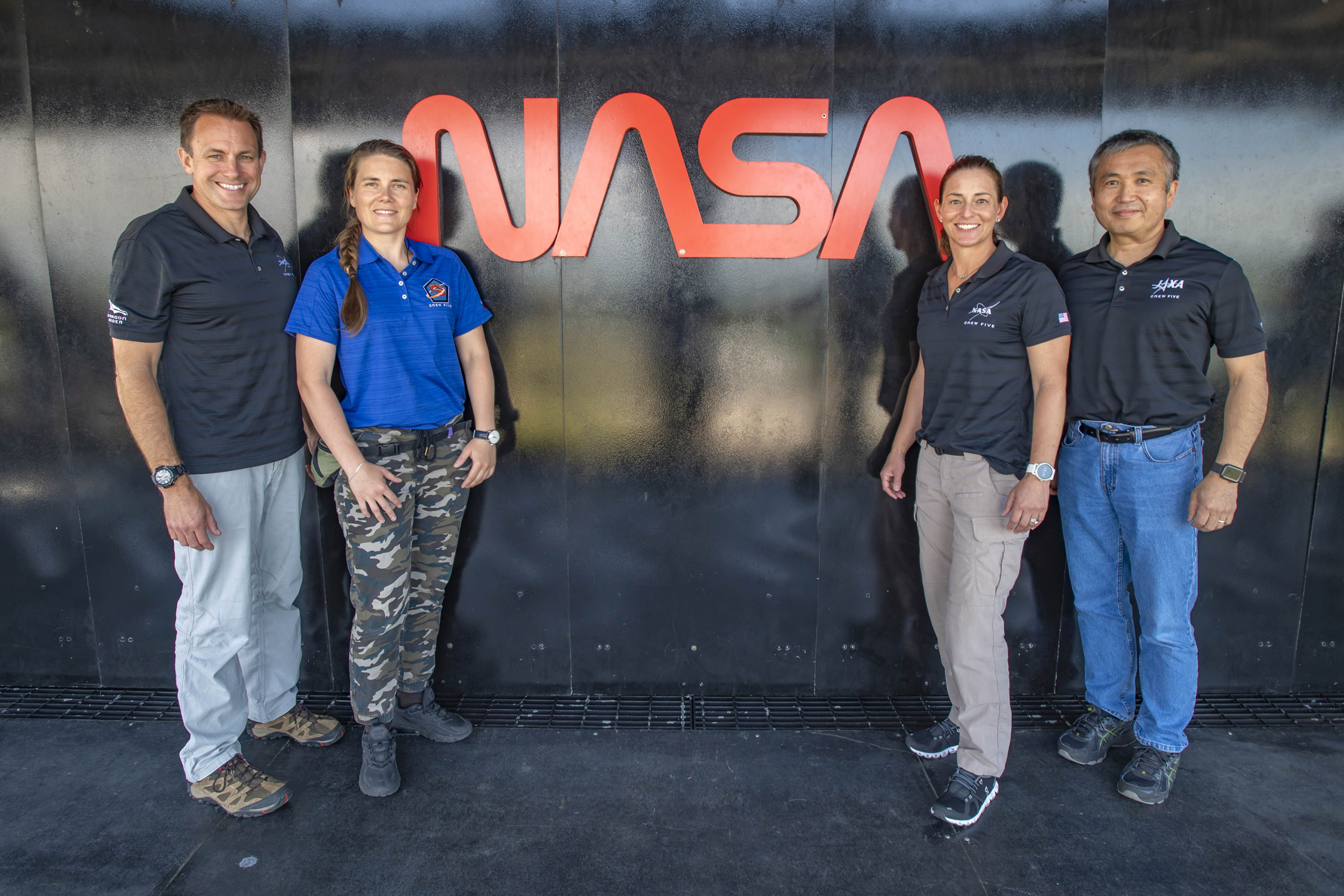 As the first cosmonaut to fly on Crew Dragon, Kikina is a part of the first US-Russia crew swap. In exchange for the ride on Dragon, NASA astronaut Francisco Rubio will fly on Soyuz MS-22, which will launch to the ISS in September 2022. Crew-5 will be the first mission since STS-113 to have a cosmonaut fly on a US spacecraft.

NASA and Roscomos approved the crew swap in July 2022 along with a swap between Soyuz MS-23 and Crew-6. These missions will launch in Spring 2023.

Crew-5 comes just weeks after NASA announced they awarded SpaceX five additional CCP flights. In early 2022, NASA awarded three additional missions for up to Crew-9. A few months later, NASA awarded five more flights, bringing SpaceX up to 14 missions with flights through Crew-14. Between Dragon and Starliner, these extra flights will give NASA uninterrupted flights to the ISS until it reaches the end of its life in 2030.

The first stage, B1077-1, will make its first flight on Crew-5, marking the third Falcon 9 booster to be introduced in 2022. B1077 will follow B1071 and B1073, which were introduced on the NROL-87 and Starlink Group 4-15 missions, respectively. The booster completed its long-duration hot fire in McGregor Texas in August of this year. However, before reaching McGregor, the booster hit a bridge during transportation from Hawthorne, California.

Thankfully, the only damage to B1077 was minor damage to the interstage. Out of caution, SpaceX replaced the interstage, and testing went as planned. The booster was then transported to KSC to support Crew-5 on Sept. 7, 2022.

This will be the first time since SpaceX Crew-1 that a new booster has supported a crewed mission. Other recent crewed missions have utilized boosters with up to five previous flights.

In SpaceX’s current fleet of four Crew Dragons, Endurance is relatively new, having only flown on the SpaceX Crew-3 mission in November 2021. After reaching the ISS, it remained in orbit for 177 days before safely splashing down in the Gulf of Mexico. It was then recovered by SpaceX’s recovery ship Shannon, which secured the Dragon and returned it to Port Canaveral.

Once back in Port Canaveral, preparations began to inspect and refurbish Endurance for Crew-5. During refurbishment, SpaceX checked nearly all parts of the spacecraft to ensure readiness for another flight. During these inspections, SpaceX spotted minor damage to the parachute canopy; however, it was well within parameters and will not add any additional risk to the crew.

SpaceX completed a standard set of tests for the heat shield. During these tests, a new heat shield composite structure didn’t pass acceptance testing, leading to the use of a different structure.

Dragon’s four forward-facing Draco thrusters and interior window panes will be flight-proven for this flight.

As a part of the refurbishment procedure, SpaceX replaced several components, including the parachutes, pod panels, and Dragon’s thermal protection system. Overall, this refurbishment process went quickly, as Endurance will break the record for the fastest turnaround time at 150 days.

After completing refurbishment on Endurance, SpaceX moved the spacecraft to a processing facility at Cape Canaveral Space Force Station (CCSFS) to go through a final test campaign. Once complete, SpaceX will mate Endurance to an unpressurized truck section, before moving the completed stack to the Horizontal Integration Facility (HIF) at LC-39A. 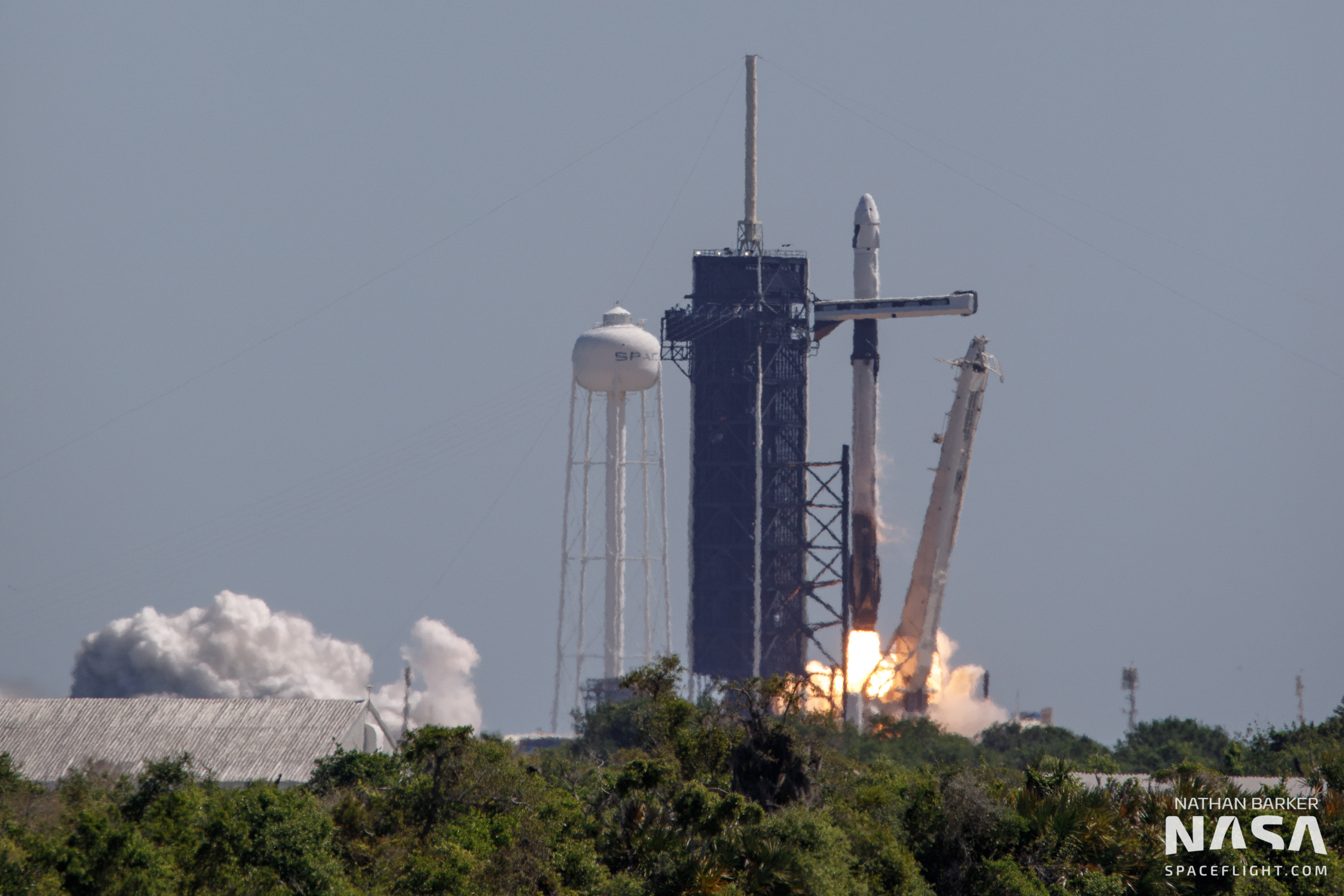 In the HIF, B1077 will have its second stage installed and placed on the Strongback Transporter Erector (T/E). The completed Dragon will be placed onto the second stage, creating the full Falcon 9 stack.

Once all preparations, modifications, and testing are complete, the T/E will roll out Falcon 9 to the pad and begin more testing. These tests will culminate in a static fire test, where SpaceX will go through the countdown without the crew.

During the static fire, the launch teams will work through a launch-day countdown, including fueling Falcon 9 and test firing all nine of its first stage engines for several seconds. This test will take place a few days before launch.

The crew will complete a “dry dress” rehearsal before the static fire. This rehearsal takes the entire launch team and crew for a complete countdown without fueling the rocket. The dry dress will include:

These final tests will culminate in the Flight Readiness Review (FRR) and Launch Readiness Review (LRR). The FRR will have SpaceX, NASA, all international partners, and significant personnel give the final approval for the flight. SpaceX and NASA will complete the LRR before launch to ensure the teams are ready to support the launch.

Launch day will follow like any other crewed Dragon launch. A few hours before launch, the crew will don their suits and depart to LC-39A in modified Tesla Model X vehicles.

At T-45 minutes, the SpaceX launch director will poll the teams to give the “go” for launch operations. The Crew Access Arm (CAA) will retract, and SpaceX will arm Endurance’s SuperDraco abort system. 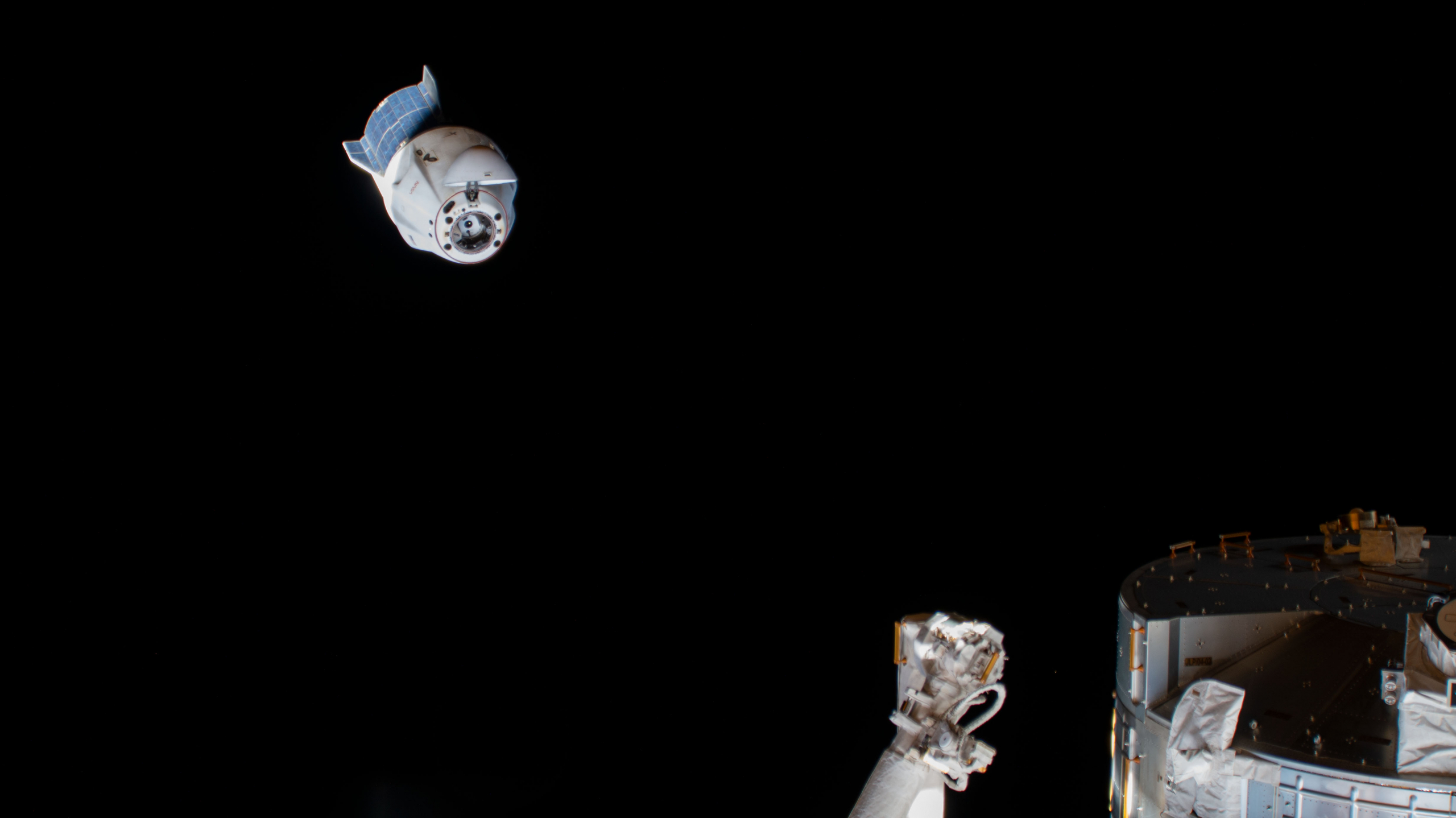 Crew Dragon Endurance backs away from the ISS near the conclusion of the Crew-3 mission. (Credit: NASA)

Following its Oct. 3 launch, Dragon Endurance will approach the ISS, performing an automated docking to the Forward port of the Node-2/Harmony module. Once sending Dragon to space, B1077 will attempt to land on one of SpaceX’s Autonomous Spaceport Drone Ships. Pending a successful recovery, it will join the 12 other boosters in the active fleet.

To prepare for Crew-5, Cargo Dragon C208-3 departed the ISS on Aug. 19, undocking from the Forward port after a month at the orbiting lab.

Once docked with the station, Dragon and its crew will remain at the ISS for approximately six months. They will join the Expedition 67/68 crew, raising the ISS’ population to 11. Crew-5 will work with Crew-4 for a direct handover to transfer operations to Crew-5, allowing Crew-4 to depart via Dragon Freedom and return to Earth, reducing the population to seven.

On the station, Crew-5 will see multiple vehicles visiting the ISS. For US vehicles, Northrop Grumman’s NG-18 Cygnus spacecraft will reach the ISS in October to resupply the station with cargo and science. In November, SpaceX will launch its new Cargo Dragon C211 on the CRS-26 mission to send science and two more iROSA solar arrays.

In NET Spring 2023, Boeing will launch its CFT mission for its crewed demonstration mission.