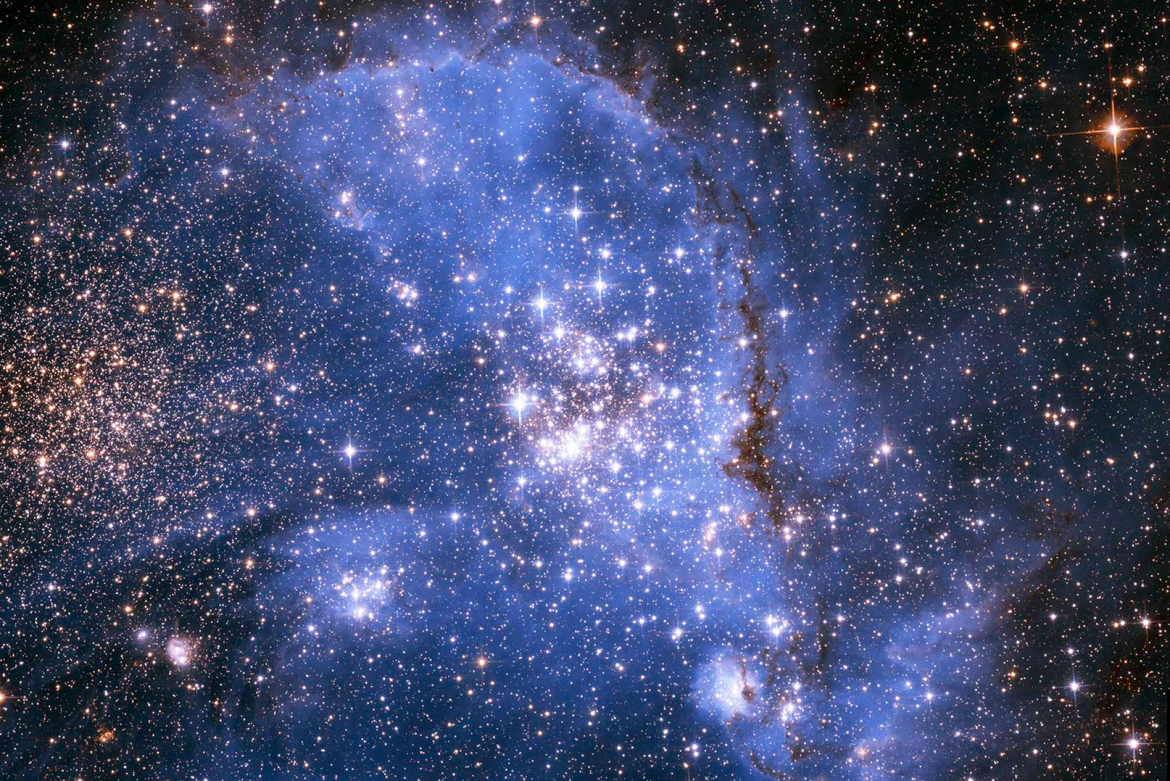 In a recently released study, data from the joint NASA/European Space Agency (ESA) Hubble Space Telescope and the European Space Observatory’s (ESO) ground-based Very Large Telescope (VLT) has been used to discover young stars spiraling into the center of a star cluster within the Small Magellanic Cloud, a small satellite galaxy of the Milky Way.

Spiral-shaped phenomena are a lot more common in nature than you might think. Hurricanes, protoplanetary disks around stars,  and spiral galaxies are all examples of naturally occurring objects that adopt spiral-shaped structures. However, certain elements and environments are required for spiral-like structures to form, so scientists were surprised to find spiral formations of stars in the Small Magellanic Cloud — an irregular, dwarf galaxy located on the outskirts of the Milky Way.

This phenomenon is taking place inside of a star cluster dubbed NGC 346 — a massive, oddly-shaped stellar nursery located inside the Small Magellanic Cloud. The cluster may be fueling star formation within its center via a long, river-like motion full of gas and stellar material that leads to its center. Interestingly, scientists say that this star formation technique is an efficient way to fuel star formation in stellar nurseries like NGC 346.

NGC 346 and the Small Magellanic Cloud are located approximately 200,000 light-years away from Earth, and though the galaxy is a satellite of the Milky Way, its chemical composition is simpler than that of the Milky Way. This makes the Small Magellanic Cloud more similar to galaxies found in the early, young universe when heavy elements were more scarce throughout the universe than they are today.

Moreover, NGC 346 is small, in cosmic terms, at only 150 light-years in diameter and a mass of 50,000 Suns. Due to this simplified chemical composition, stars within the Small Magellanic Cloud burn at hotter temperatures and run out of fuel faster than stars inside of the Milky Way.

Additionally, the Small Magellanic Cloud is one of the closer galaxies to Earth, at a distance of about 200,000 light-years away — giving scientists the ability to measure star formation and evolution in the galaxy more precisely than they would be able to with other galaxies.

If scientists can understand how stars form in the Small Magellanic Cloud, they can investigate the theory that suggests that a massive amount of star formation occurred in the early universe, a sort of “baby boom” of stars. The universe would have only been around two or three billion years old during this stellar boom, making the Small Magellanic Cloud a prime candidate for research because of its simplified chemical composition that is reminiscent of galaxies in the early universe.

Using the Hubble and the VLT, two groups of scientists — led by Elana Sabbi of the Space Telescope Science Institute (STScI) and Peter Zeidler of AURA/STScI for ESA — uncovered the mysteries surrounding the nature of NGC 346 and its collections of stars.

“Stars are the machines that sculpt the universe. We would not have life without stars, and yet we don’t fully understand how they form. We have several models that make predictions, and some of these predictions are contradictory. We want to determine what is regulating the process of star formation because these are the laws that we need to also understand what we see in the early universe,” Sabbi said.

The two groups determined the motion of the stars inside NGC 346 using two different techniques, and the results from the research show that the star formation process inside NGC 346 is similar to that of the Milky Way.

With Hubble, Sabbi et al. measured the changes in stars’ positions inside NGC 346 over a period of 11 years. The stars inside NGC 346 move at an average velocity of around 2,000 miles per hour (3,218.7 kilometers per hour), meaning that in an 11-year period, the stars will move approximately 200 million miles — which is approximately two times the distance between the Earth and the Sun.

With Hubble’s help, astronomers observed stars “spiraling” into the center of a huge stellar nursery known as NGC 346.

These observations will help unveil more clues about our early universe.

Though NGC 346 is close, it is buried within the Small Magellanic Cloud, making the amount of observed motion very small and often difficult to measure.  However, Hubble’s advanced sensitivity and superb resolution allowed scientists to get the exceptionally precise and sharp observations seen in the study. Furthermore, Hubble’s three decades of operation provide scientists with high amounts of very detailed celestial movements taken from previous observations.

Nearly half of the Hubble observations used in Subbi et al.’s study are archival data, with the oldest observations of NGC 346 used in the study beginning 11 years ago in 2011. Researchers then observed NGC 346 again in 2022 to map out how the stars moved in NGC 346, as well as to see how other elements of the cluster changed over time. In total, the Hubble data archive has over 32 years of astronomical data that is available for use by research teams like Subbi et al.

“The Hubble archive is really a gold mine. There are so many interesting star-forming regions that Hubble has observed over the years. Given that Hubble is performing so well, we can actually repeat these observations. This can really advance our understanding of star formation,” said Sabbi.

The second group of researchers, Zeidler et al., utilized the capabilities of the VLT’s Multi Unit Spectroscopic Explorer (MUSE) instrument to determine the radial velocity of NGC 346 and the stars within it. Finding the radial velocity of the stars will determine whether or not NGC 346 and its stars are approaching or receding from Earth, giving scientists a more detailed idea of the structure and location of NGC 346. Moreover, data from MUSE gave Zeidler et al. a view of NGC 346 in 3D, giving them the chance to study the structure of the star cluster and the star spiral.

“What was really amazing is that we used two completely different methods with different facilities and basically came to the same conclusion, independent of each other. With Hubble, you can see the stars, but with MUSE we can also see the gas motion in the third dimension, and it confirms the theory that everything is spiraling inwards,” said Zeidler. 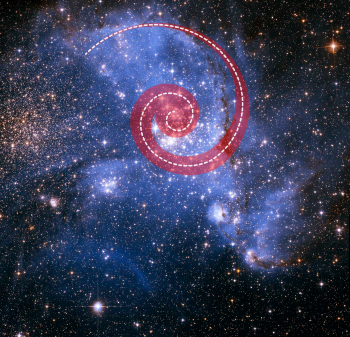 So, why is there a spiral?

“A spiral is really the good, natural way to feed star formation from the outside toward the center of the cluster. It’s the most efficient way that stars and gas fueling more star formation can move towards the center,” Zeidler said.

Future infrared observations of NGC 346 by NASA’s new James Webb Space Telescope are expected to provide a more holistic view of the stellar nursery, as Webb will be able to resolve lower-mass stars in the cluster that cannot be seen by Hubble. Furthermore, scientists will be able to use Webb to repeat this experiment and measure the motion of low-mass stars inside NGC 346, allowing scientists to compare the movement and characteristics of low-mass and high-mass stars and learn more about the dynamics of NGC 346.

Sabbi et al. and Zeidler et al.’s studies were published on Sept. 8 in The Astrophysical Journal.