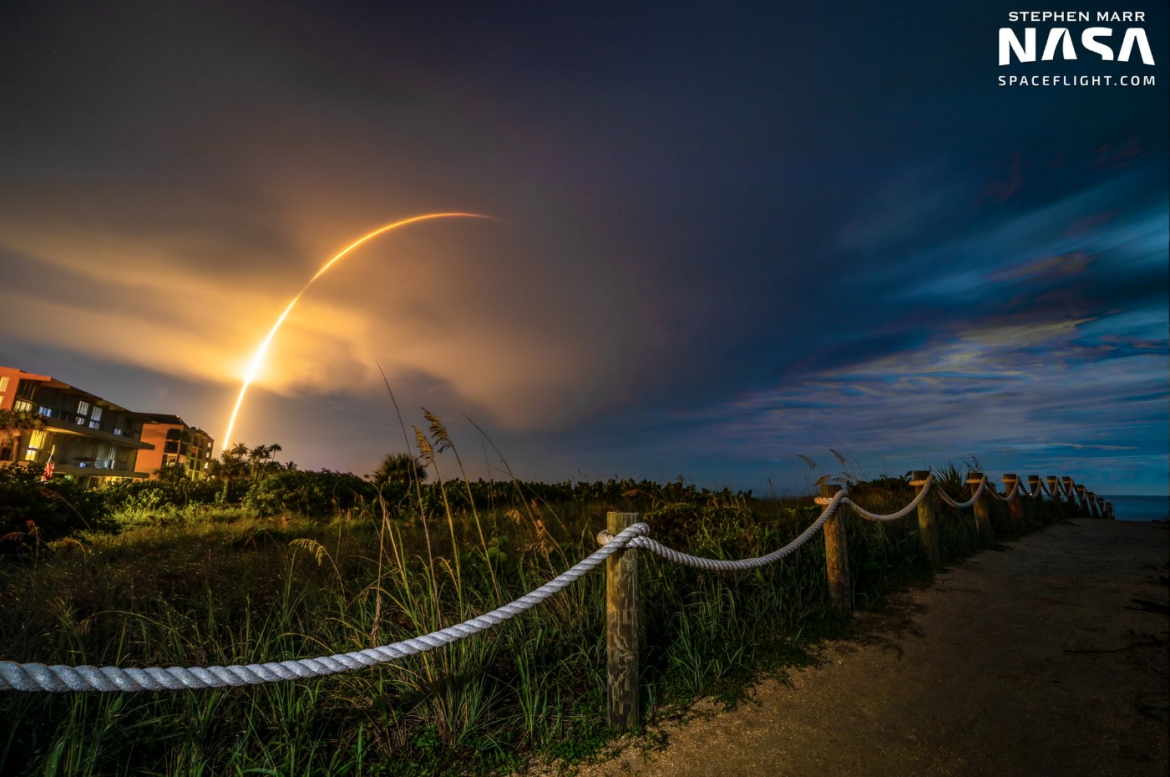 The weather forecast for the mission showed a 60% chance of acceptable weather on Saturday night. Weather criteria being watched included the Cumulus Cloud, Anvil Cloud, and Surface Electric Fields rules. The weather did prompt a minor 10-minute delay to the launch. If the mission had been delayed to Sunday night, there was a slightly better forecast of a 70% chance of acceptable weather.

Booster B1058 made its 14th flight on this mission, marking a new reuse record at SpaceX. This booster debuted with the NASA/SpaceX Demo-2 crewed mission in May 2020 and would go on to launch a CRS mission, a communications satellite to GTO, two Transporter missions, and eight Starlink missions. Nautical support for the Starlink 4-2 flight includes the Autonomous Spaceport Drone Ship (ASDS) A Shortfall of Gravitas, on which B1058 landed after completing the stage one portion of flight. A Shortfall of Gravitas was accompanied by support ship Bob to tow the drone ship into position and retrieve the fairing halves.

This flight also featured a record number of firings for the second stage of Falcon 9.  Over the course of more than two hours, the second stage was ignited five times: two times to place BlueWalker 3 spacecraft in a circular orbit at approximately 513 km in altitude and 53.2 degrees inclination, two more times to reach a circular 330 km orbit for the Starlink satellites, and one more time to deorbit the stage from low Earth orbit (LEO).  BlueWalker 3 was deployed approximately 50 minutes into the mission, and the Starlink satellites were deployed just over two hours after liftoff.

This was the 41st SpaceX launch of 2022, the 27th Starlink deployment of the year, and the 51st SpaceX launch in the last 12 months. It is the seventh of as many as 10 straight Starlink flights for SpaceX in August and September while they await the arrival of other customer payloads. Starting with a launch for the Space Development Agency (SDA) in late September, SpaceX still has around 20 potential missions manifested for a wide variety of government and commercial customers through the end of the year. Some of those will inevitably move into 2023. 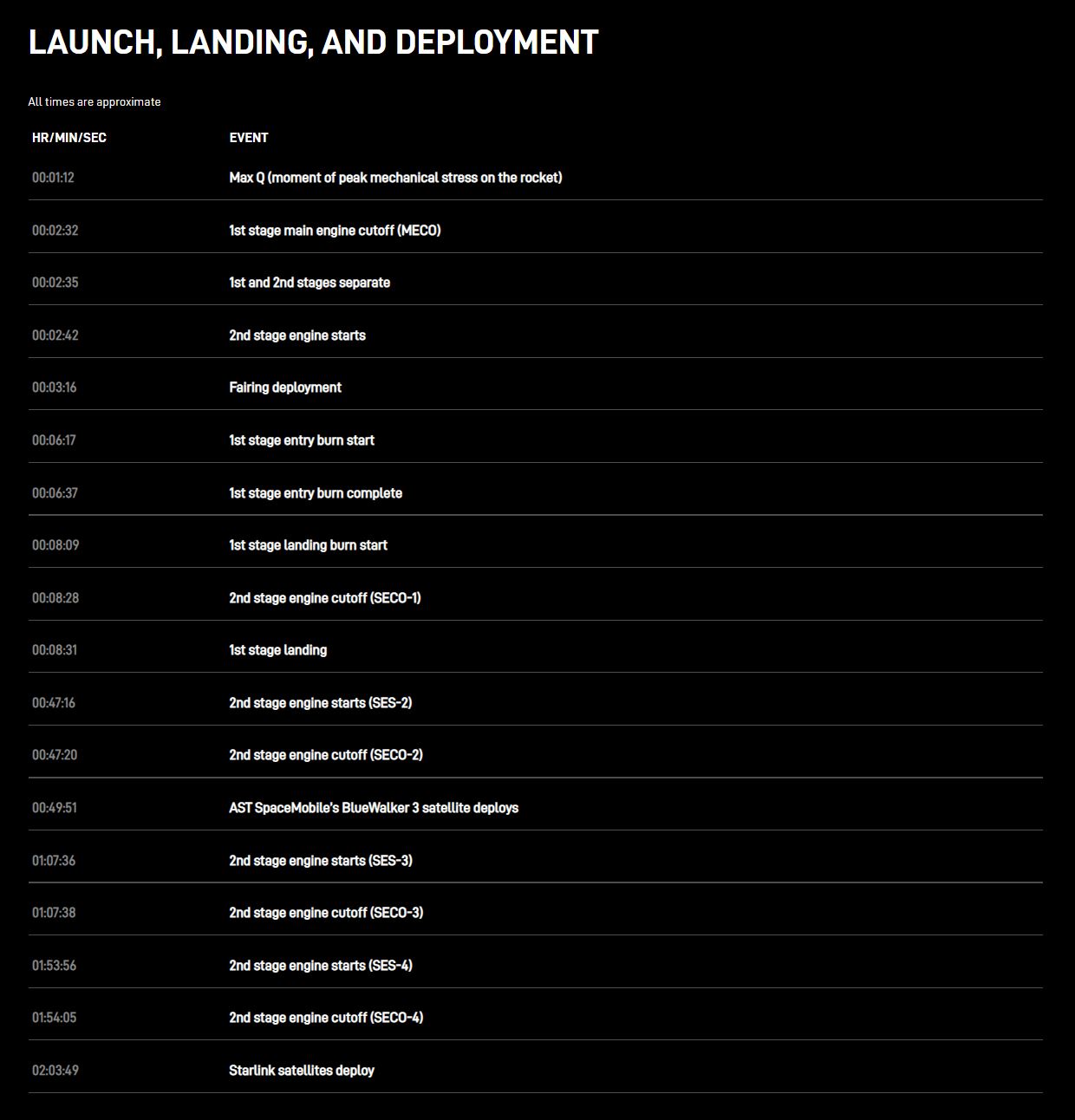 The Starlink satellites on this launch will bring shell four of the constellation to about 1,260 active satellites, many of which are still moving into position after launch. With three more launches for this shell planned to launch from Florida and one from California in the near future, SpaceX seems to be on track to put this entire shell of 1,440 satellites into service in early 2023 and introduce the use of laser inter-satellite links between their spacecraft. This will allow users to access the service even when they are not in range of a ground station, giving coverage to ships and planes crossing the oceans.

The rideshare passenger on this flight, BlueWalker 3, is the second prototype satellite to be put into use by AST SpaceMobile as they work towards deploying a constellation of satellites that can provide broadband service directly to unmodified cellular phones.

BlueWalker 3 has a mass of approximately 1.5 tons and is comprised of a central control node 1.28 meters (4.2 feet) across along with a large deployable structure made of modular square tiles, which provide phased array antennas on one side for communications with the cellular devices and solar cells on the other side for power. These tiles pack into a cube for launch and will unfold into a 64.4 square meter (693 square foot) array on orbit.

Once deployed, BlueWalker 3 will be tested in partnership with mobile network operators around the globe, including AT&T, Vodafone, Orange, and Rakuten Mobile. 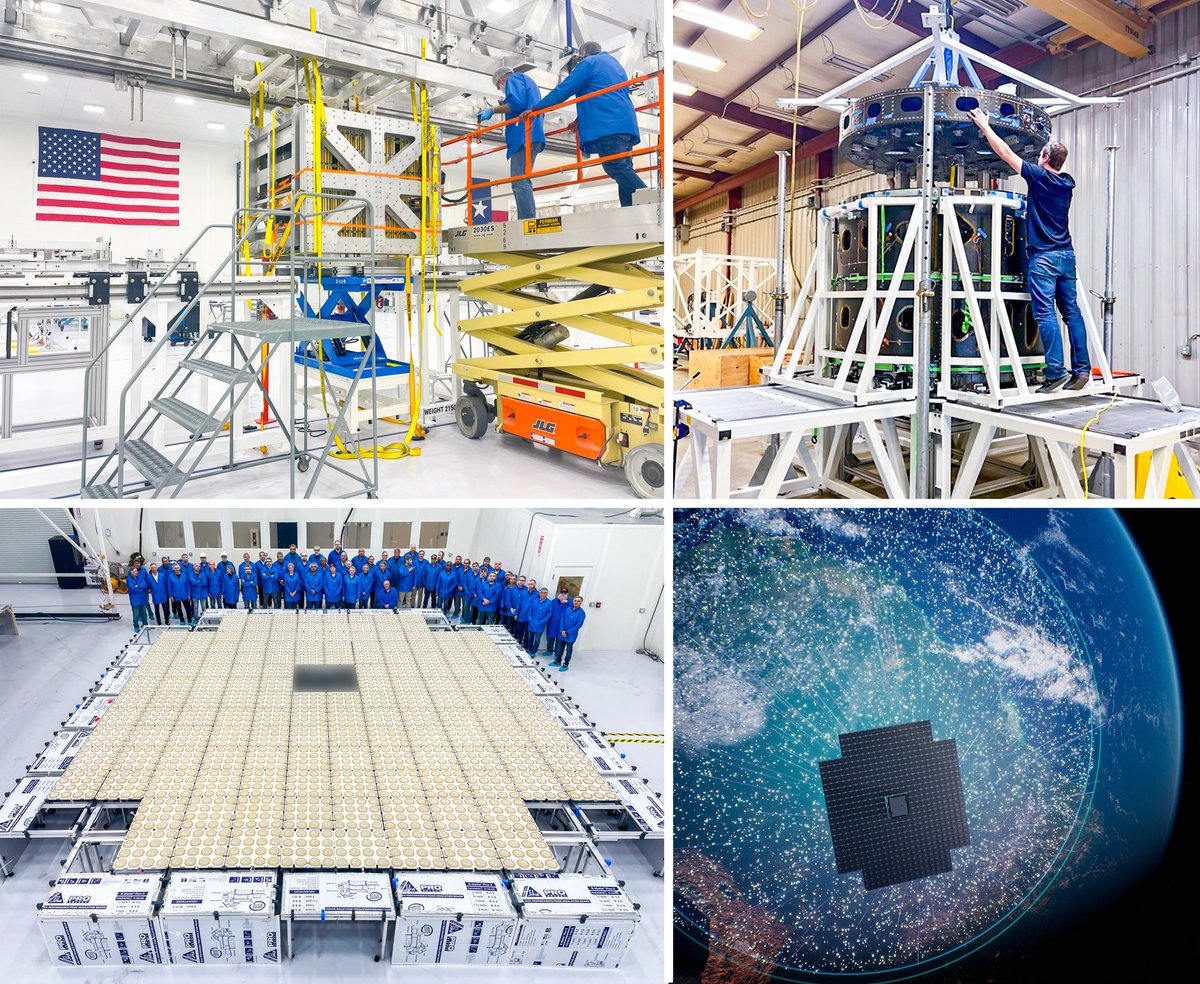 Top left: the antenna array folded for launch. Top right: teams integrate the launch vehicle adapter that holds the satellite during launch. Bottom left: the unfolded array, antenna side up. Bottom right: artist’s rendition of the deployed satellite in orbit, showing the solar cells on the array. (Credit: AST SpaceMobile)

AST SpaceMobile is one of several companies working on providing satellite service directly to cellular devices. Lynk Global is working on a constellation of satellites that will initially provide messaging services. They have already launched several prototypes and will deploy three more spacecraft on the upcoming SpaceX Transporter 6 mission. SpaceX, along with T-Mobile, also recently announced their intent to provide messaging services to cellular devices through future Starlink satellites. All three of those constellations plan to partner with mobile network operators (MNOs) and use the already licensed frequencies of those companies to augment the coverage of their existing terrestrial networks. These new constellations are working through licensing processes to allow frequency sharing between the satellites and the terrestrial networks of their partner MNOs.

An alternative architecture for providing emergency messaging was recently announced by Apple, which will enable their new phones to send messages over the Globalstar satellite constellation on frequencies licensed for satellite service.