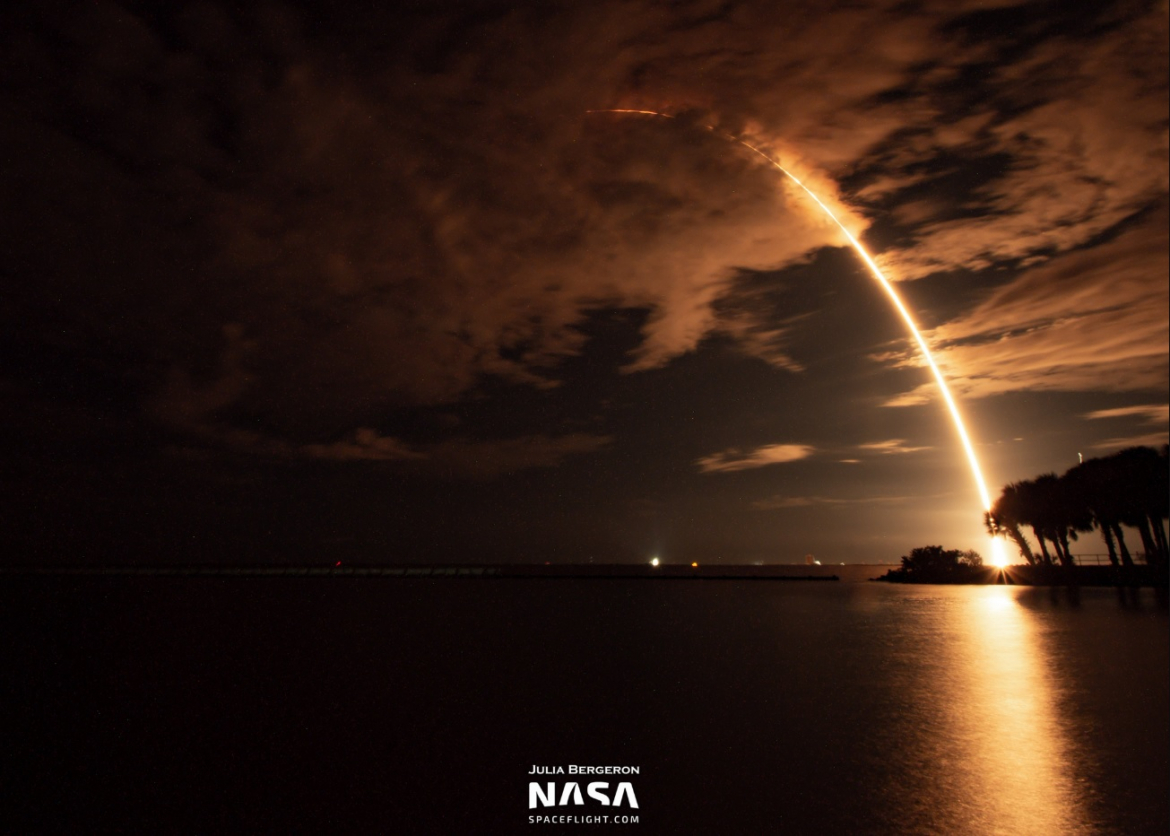 This mission launched from Space Launch Complex 40 (SLC-40) at the Cape Canaveral Space Force Station in Florida. The booster supporting Starlink Group 4-34 is B1067, which had flown on five previous missions. B1067 debuted on the CRS-22 mission and went on to launch the Crew-3, Turksat-5B, Crew-4, and CRS-25 flights.

To initialize the automated launch sequence at T-38 minutes, SpaceX’s Launch Director gives the “go” for propellant loading. At T-35 minutes, sub-cooled RP-1 kerosene was loaded into both the first and second stages, and the first stage also began being loaded with liquid oxygen (LOX).

At T-20 minutes, the RP-1 loading into the second stage was complete, and a large vent from the Transport Erector (T/E) can be seen. This is to purge the T/E’s lines of RP-1 in preparation for the second stage’s next phase of fueling: at T-16 minutes, LOX began being loaded into the second stage. Once LOX loading is completed, RP-1 on the first stage and LOX on both stages were topped off until T-90 seconds.

The next milestone of the launch sequence occurs at T-7 minutes, at which point the Falcon 9 first stage begins engine chill—the booster flows a small amount of LOX through the oxygen section of each M1D turbo pump, preventing propellant from flashing into a gas at engine ignition, which could severely damage the engine.

Next, at T-1 minute, the flight computer takes over the countdown in what is called “startup” and begins the final prelaunch checks. At the same time, the propellant tanks pressurize to match the pressures required during the flight. Once this is completed, a call out of “tanks are pressed for flight” can be heard. 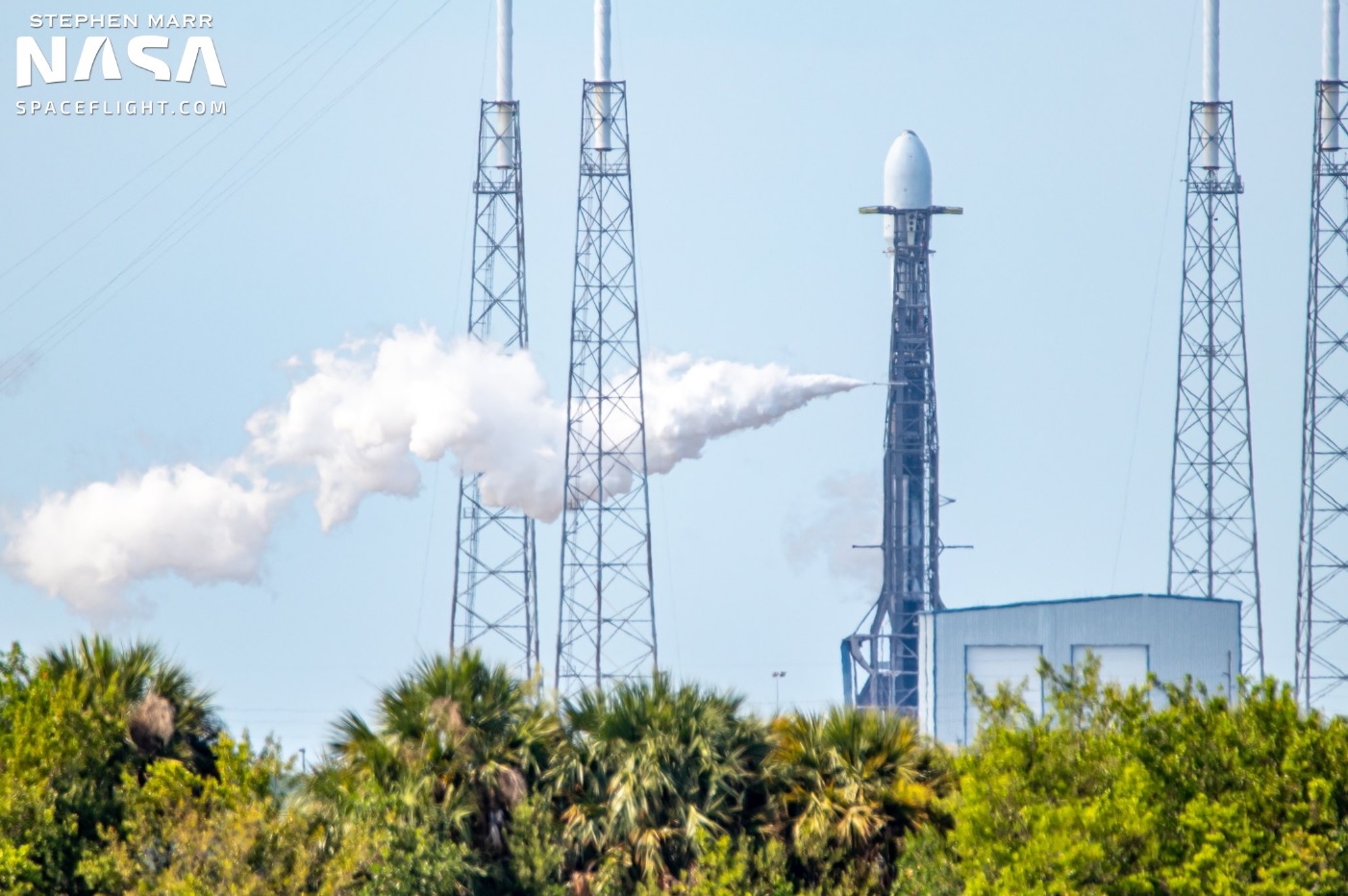 Next, the Launch Director verified the final “go” for launch at T-45 seconds. Then at T-3 seconds, the engine controller sent the command for ignition of the first stage’s nine Merlin 1D engines. By T-0.02 seconds, the engines and vehicle were running independently and were ready for flight, and the vehicle commanded the hydraulic launch clamps to release at T0, allowing the vehicle to liftoff.

Following liftoff, the vehicle encountered Max-Q – the moment of maximum aerodynamic pressure – at T+1 minute and 12 seconds. The first stage Merlin 1D engines remained lit until T+2 minutes and 27 seconds, at which point a series of events occur in quick succession. First, all nine M1D engines shut down, followed shortly after by the separation of the stages. The second stage then ignites its single M1D Vacuum engine.

The fairings, which protect the payloads from debris and atmospheric heating during ascent, separate from the vehicle at T+3:13. Both fairing halves utilize RCS thrusters and parachutes to re-enter the atmosphere and softly splashdown in the Atlantic Ocean. The fairing halves will be recovered by SpaceX’s fairing recovery ship, Doug.

Also following stage separation, the first stage deployed its four grid fins and performed a series of thruster maneuvers to properly orientate itself for re-entry into Earth’s atmosphere. At T+7:07, the first stage’s re-entry burn begins and continues for the next 31 seconds. The first stage then coasted back toward Earth, continuing to use its grid fins to orient itself for an on-target landing. 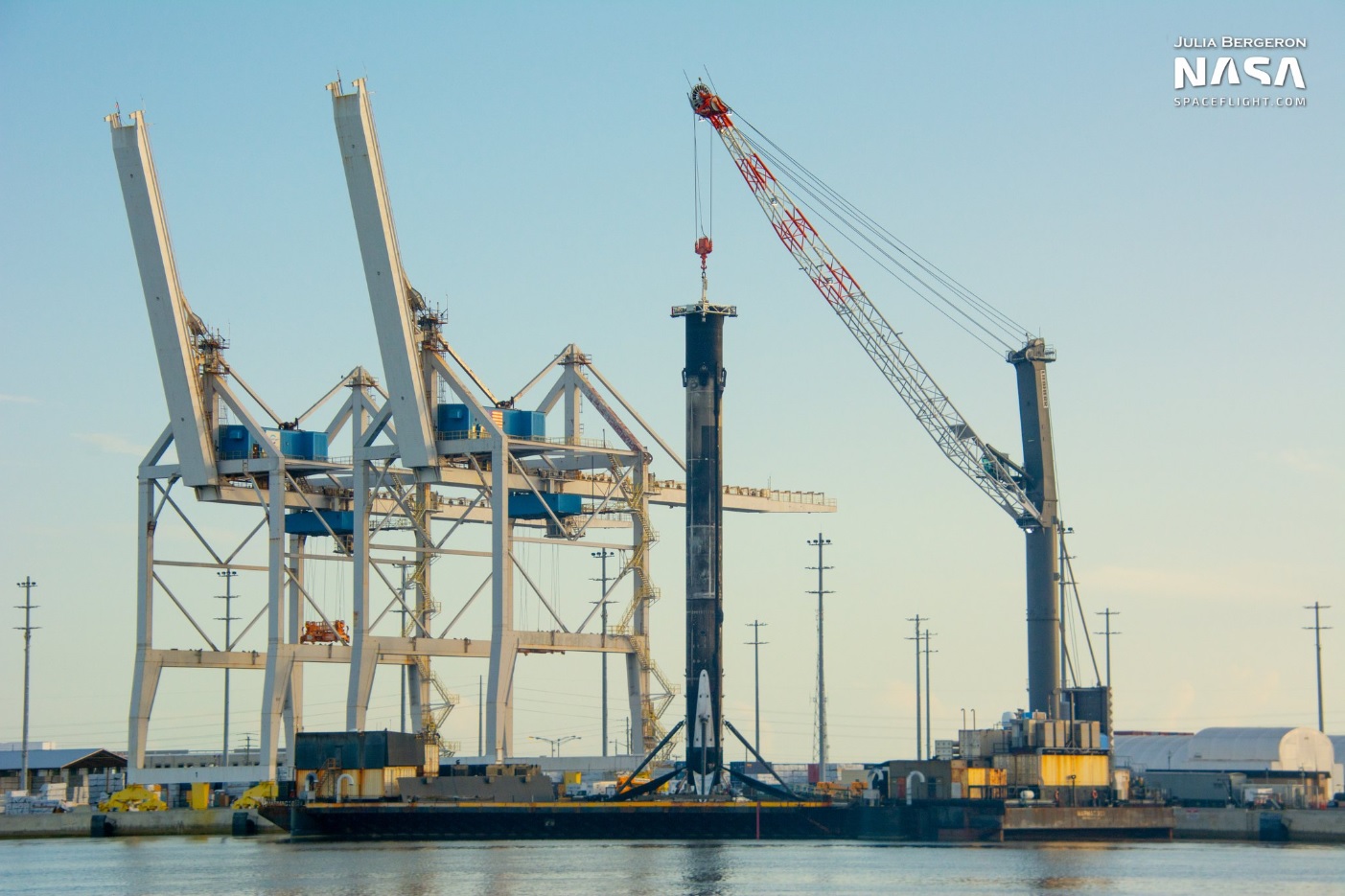 Falcon 9 B1052 in Port Canaveral onboard JRTI after the KPLO mission in August 2022. (Credit: Julia Bergeron for NSF)

At T+8:26, the first stage initiated a third burn to slow itself down for a soft landing on SpaceX’s Autonomous Spaceport Drone Ship (ASDS) Just Read the Instructions (JRTI) off the coast of North Carolina.

Once the second stage reached its desired parking orbit, Second Engine Cut Off (SECO) will occur and the stage briefly coasted in preparation for payload deployment.

The second stage then begins to rotate over its x-axis, before deploying the four tension rods at T+15 minutes and 21 seconds. Due to the stage’s rotation, the 54 Starlink satellites have varying amounts of angular momentum, causing them to separate once the tension rods are deployed.

The Starlink satellites will now spend the following months raising their orbit to Starlink Shell 4: a 540 km circular orbit at 53.2 degrees inclination. SpaceX has at least two more missions in September, including at least one more Starlink mission and the Transport and Tracking Layer (TTL) Tranche 0 Flight 1 mission for the Space Development Agency (SDA).

Soyuz MS-22 lofts two Russians and one American to ISS