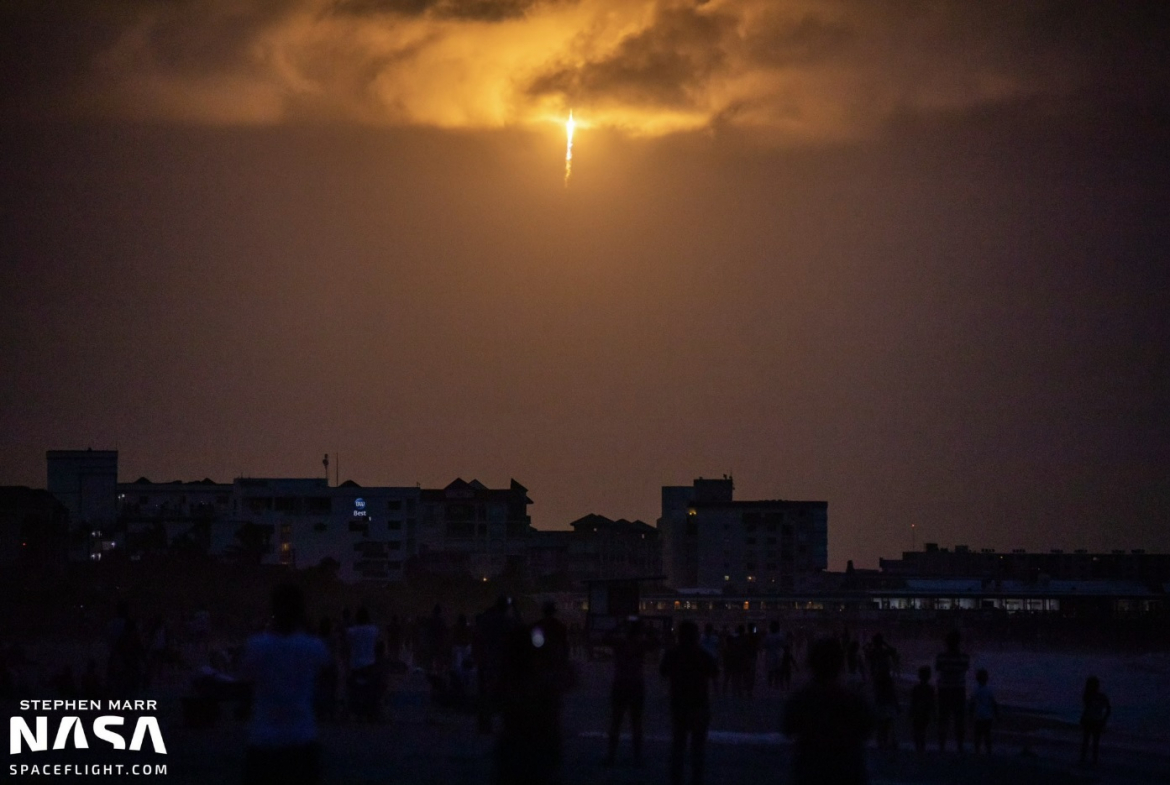 SpaceX has launched yet another batch of Starlink satellites to low-Earth orbit on its Starlink Group 4-35 mission. Launching from Space Launch Complex 40 (SLC-40), at the Cape Canaveral Space Force Station, in Florida, the Falcon 9 is lifted off at 7:32 PM EDT (23:32 UTC) on Sept. 24. This mission marks SpaceX’s 43rd mission of 2022 and 15th mission in the year’s second half – a mission every 6.2 days and 5.7 days, respectively.

In the event of a delay, there was a backup launch opportunity just under 24 hours later on Sept. 25.

Following stage separation, B1073 landed on SpaceX’s autonomous spaceport drone ship (ASDS) A Shortfall Of Gravitas (ASOG), which was towed 645 km downrange by SpaceX’s combined tug boat, ASDS support ship, and fairing recovery vehicle Bob. Once the ASDS is in position, Bob headed to the fairing recovery site to recover both fairing halves ~45 minutes after launch.

Inside Falcon 9’s 5.2-meter diameter payload fairing were 52 Starlink v1.5 satellites – two fewer satellites than have been on the last two dedicated Starlink missions from the East coast. The satellites were deployed from the second stage just over 15 minutes after launch at 23:47:43.500 UTC into a 337 x 232 km low-Earth orbit at 53.22 degrees. The satellites will then spend the coming months raising their orbits to their operational 540 km circular orbit at 53.2 degrees, which is the fourth shell of Starlink v1.

Starlink Group 4-35 boosts the total number of Starlink satellites launched to 3,399. Of the current satellites in orbit, 3,029 are working and 2,497 are operational (via Jonathan McDowell).

Each Starlink satellite has a compact flat-panel design allowing for Falcon 9’s maximum performance to be taken advantage of; each satellite masses ~305 kg, resulting in a total payload mass of ~16,000 kg for the Starlink Group 4-35 mission. Each Starlink satellite is equipped with an inter-satellite laser communication system, which allows SpaceX to provide coverage to areas where ground stations are not available, such as Antarctica. Additionally, SpaceX has been testing Starlink service on aircraft, where they have demonstrated 100 Mb/s speeds during flight. SpaceX CEO Elon Musk noted on Twitter that with additional improvements they expect these speeds to increase to 300 Mb/s.

NSF-supported USAP scientists in #Antarctica are over the moon! Starlink is testing polar service with a newly deployed user terminal at McMurdo Station, increasing bandwidth and connectivity for science support. pic.twitter.com/c3kLGk8XBV

Falcon 9’s now-routine launch sequence starts at T-38 minutes when the launch director verifies that all teams are “go” for propellant loading. With all systems ready to support the launch, the launch director gave their go, allowing for fueling to start at T-35 minutes. At this time, the ground service equipment (GSE) begins loading RP-1 onto both the first and second stages and super chilled liquid oxygen (LOX) onto the first stage.

The second stage is fully fueled with sub-chilled RP-1 at T-20 minutes when the Transporter/Erector (T/E) is purged for four minutes to prepare the second stage for LOX filling, resulting in the iconic T-20 minute vent from the T/E.

At T-7 minutes, the first stage flows a small amount of LOX through the turbo pump of the first stage Merlin 1D engines. This cools the engines ahead of full propellant flow at engine ignition – a process that is extremely important, as a warm engine could flash liquid oxygen into a gas at ignition, which would lead to cavitation of the turbine, significantly weakening, if not breaking, the metal.

Three seconds before liftoff, the Falcon 9 commands ignition of all nine first stage engines. These engines ignite in pairs ~100 ms apart to reduce transients on the vehicle. This is done using TEA-TEB, a pyrophoric mixture (igniting when it comes in contact with oxygen) which results in the classic green flash at Falcon 9 ignition. By T-0.2 seconds, all nine engines are at full power. The vehicle then checks the health of all nine engines and systems; if the vehicle is healthy, it commands the ground hold-down clamps to be released at T0. 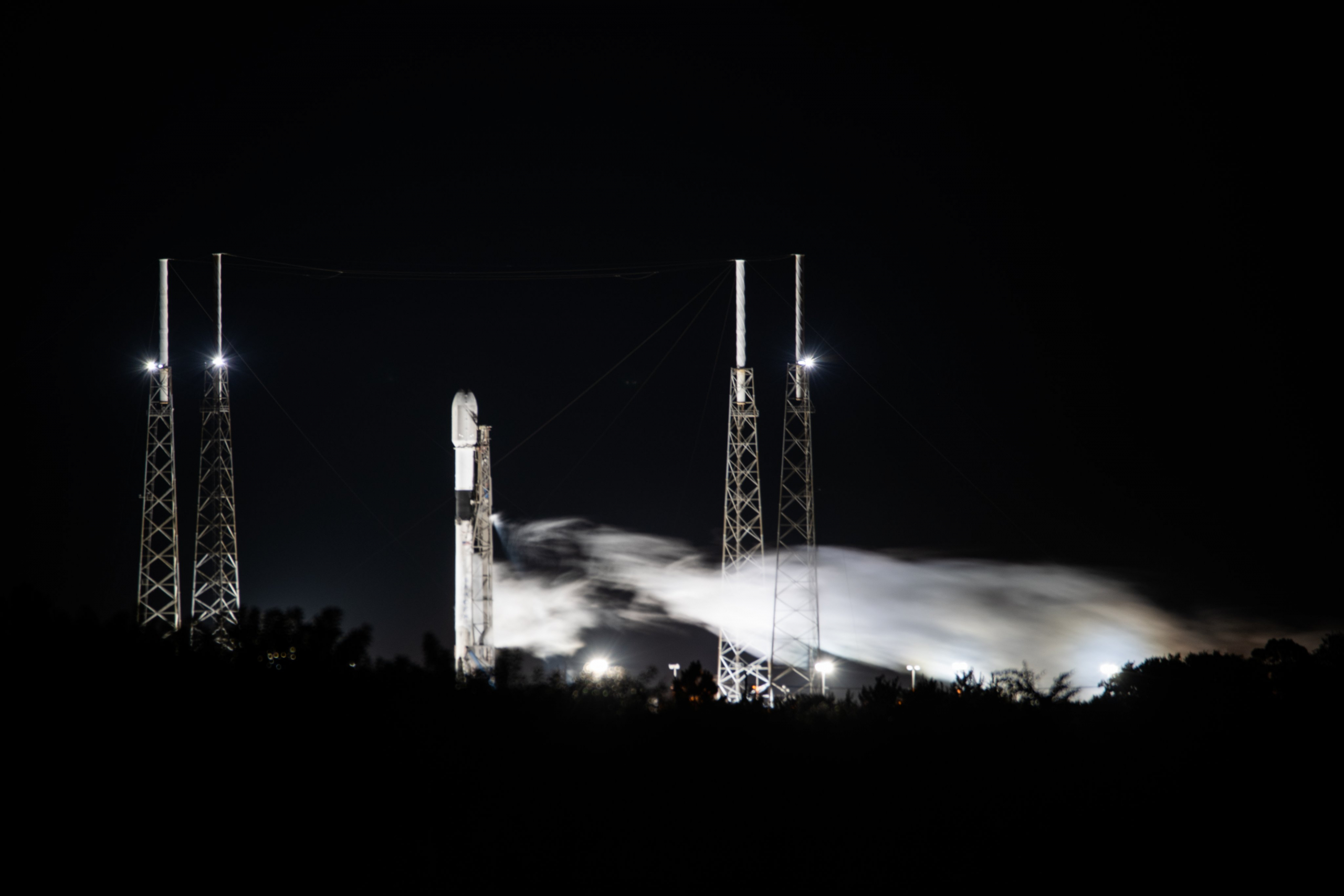 Falcon 9 venting ahead of the Starlink Group 4-23 mission. (Credit: Brady Kenniston for NSF)

The first stage then burned for approximately two and a half minutes before shutting down. Similar to ignition, engine shutdown is done in pairs to reduce stresses on the vehicle. The stages then separate, allowing for the second stage’s single MVacD engine to ignite. Also at this time, the first stage performed a flip, preparing for reentry.

The first stage then completed an entry burn and a landing burn, aiming to softly land on ASOG. During this time, the second stage fired for just under six minutes.

At this point, the second stage began rotating end-over-end before deploying the Starlink tension rods at T+15 minutes and 33.5 seconds. This allowed the Starlink satellites to slowly float away, spreading out due to small differences in linear velocity. The second stage then performs a deorbit burn.

SpaceX is expected to launch one more mission in September: Starlink Group 4-36. In October, SpaceX will launch the Crew-5 mission to the International Space Station, as well as several planned customer payload missions.