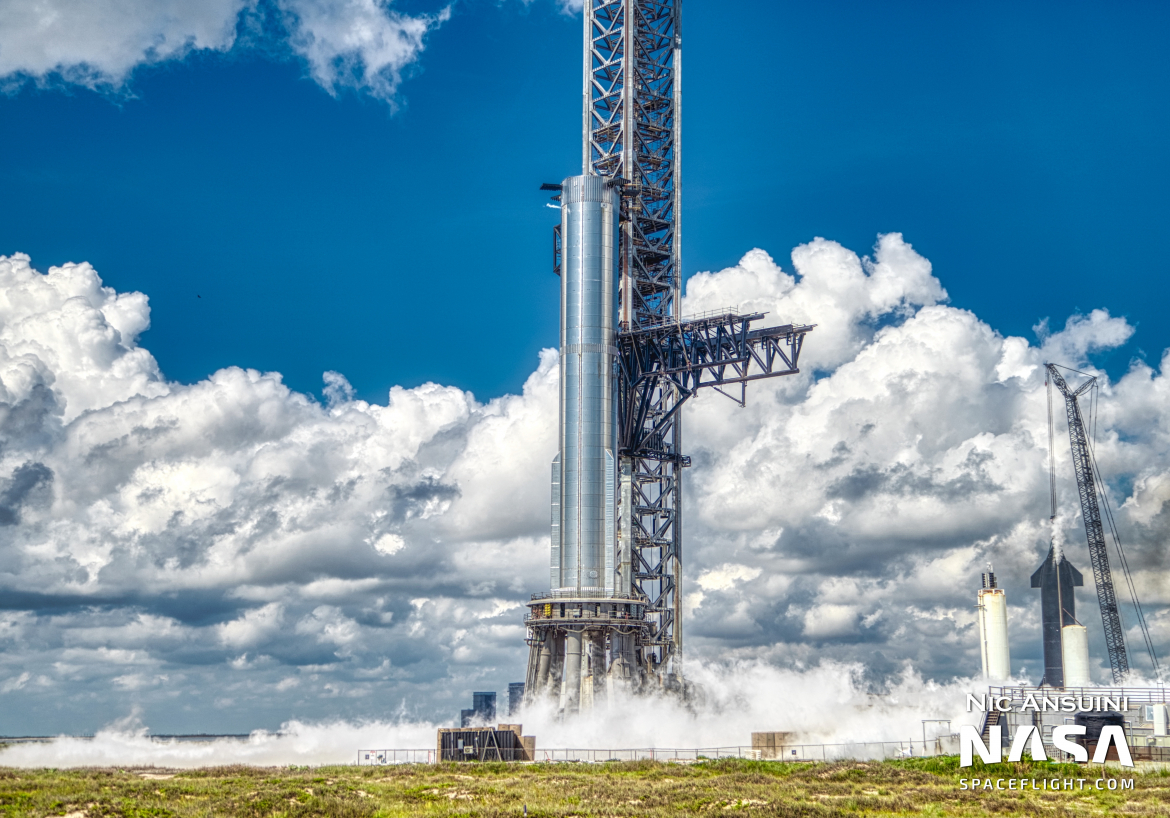 After Booster 7 was stacked on the orbital launch mount (OLM), the stage was set for a dual test campaign with its partner, Ship 24. First, Booster 7 performed a pair of three-engine spin primes.

The path to static fire testing was slightly delayed after Ship 24 performed a six-engine spin prime test. Soon after the test, the vehicle was hooked up to the company’s LR 11000 crane, allowing workers to enter the vehicle’s liquid oxygen (LOX) tank.

It was understood that teams were trying to correct issues discovered in the previous tests and that such problems may have had some commonalities with others also encountered with Booster 7.

Booster 7 ended August with a three-engine static fire test after another abort earlier in the day. However, during this test, one of the three engines aborted right at ignition and didn’t fire.

Regardless, and a sign of SpaceX’s duo testing approach, Ship 24 was prepared for a six-engine static fire test.

During the six-engine static fire tests, the ship is loaded with more LOX than needed to work as ballast. However, with the ship well into propellant load, an abort occurred.

Later in the week, a swap of one of Ship 24’s Raptor Vacuum (RVac) engines – likely due to issues encountered during the tests – took place.

At the same time, workers replaced one of the center engines, specifically engine number seven, from Booster 7. This raised some eyebrows as the engine was not tested during the test campaign of the booster and wasn’t involved in the previous static fire tests.

Work on these issues would follow over the next week until Sept. 8. That day, both booster and ship were tested again, this time with a 33-engine spin prime test of Booster 7 and a six-engine static fire test of Ship 24 that lasted about six seconds.

Booster 7’s 33-engine spin prime test was a long-awaited test. A prior attempt on July 11 resulted in a fuel-air mixture detonation a few seconds into the test that prompted several repairs and a redesign of the engine chilldown procedures.

The new engine chill system sees the methane used for chilldown of the Raptor engines going into a new pipe system that collects and dumps it into a pit some distance away from the OLM.

While simple and not necessarily elegant, this system has so far proven to avoid the fuel-air mixture issue that occurred during the explosion of the 33-engine spin prime test. While it isn’t confirmed if this system will be permanent through launch, it does seem to provide SpaceX with the safety needed to at least push through pre-launch testing to a certain degree.

Another 33-engine spin prime test was completed on Sept. 12 in what appeared to be a carbon copy of the Sept. 8 test. It is not unexpected that SpaceX teams may perform several of these full engine spin prime tests before proceeding with more complex testing as it provides a wealth of data that may be useful on how to execute the next steps.

Ship 24’s six-engine static fire test on Sept. 8 initiated a grass fire that was put out by Cameron County fire department officials later that night. Part of the work to put out this fire included lighting some of the grass ahead of the firefront to remove the “fuel” for that fire; this is a common technique for putting out fires.

A prior grass fire similar to this one occurred in July 2019 after Starhopper’s 20-meter hop test, but a satellite view of the Sept. 8 fire compared to the one back in 2019 suggests it was smaller and the impact was more contained.

Despite the grass fire issue, the test appeared to go as planned, with no significant visual problems other than some tiles falling off the vehicle during the extended test. Tile liberation during these static fire tests is expected as the vehicle is held to the ground and vibrations move and reflect over the whole structure, causing tiles to likely move out of their pin sockets and fall away.

On top of that, the engine ignition shock reflection with the ground also affects the tiles as such shock hits back on the vehicle and may knock them loose or even break them. A glaring example of this issue can be found on the Space Shuttle’s first mission, STS-1. 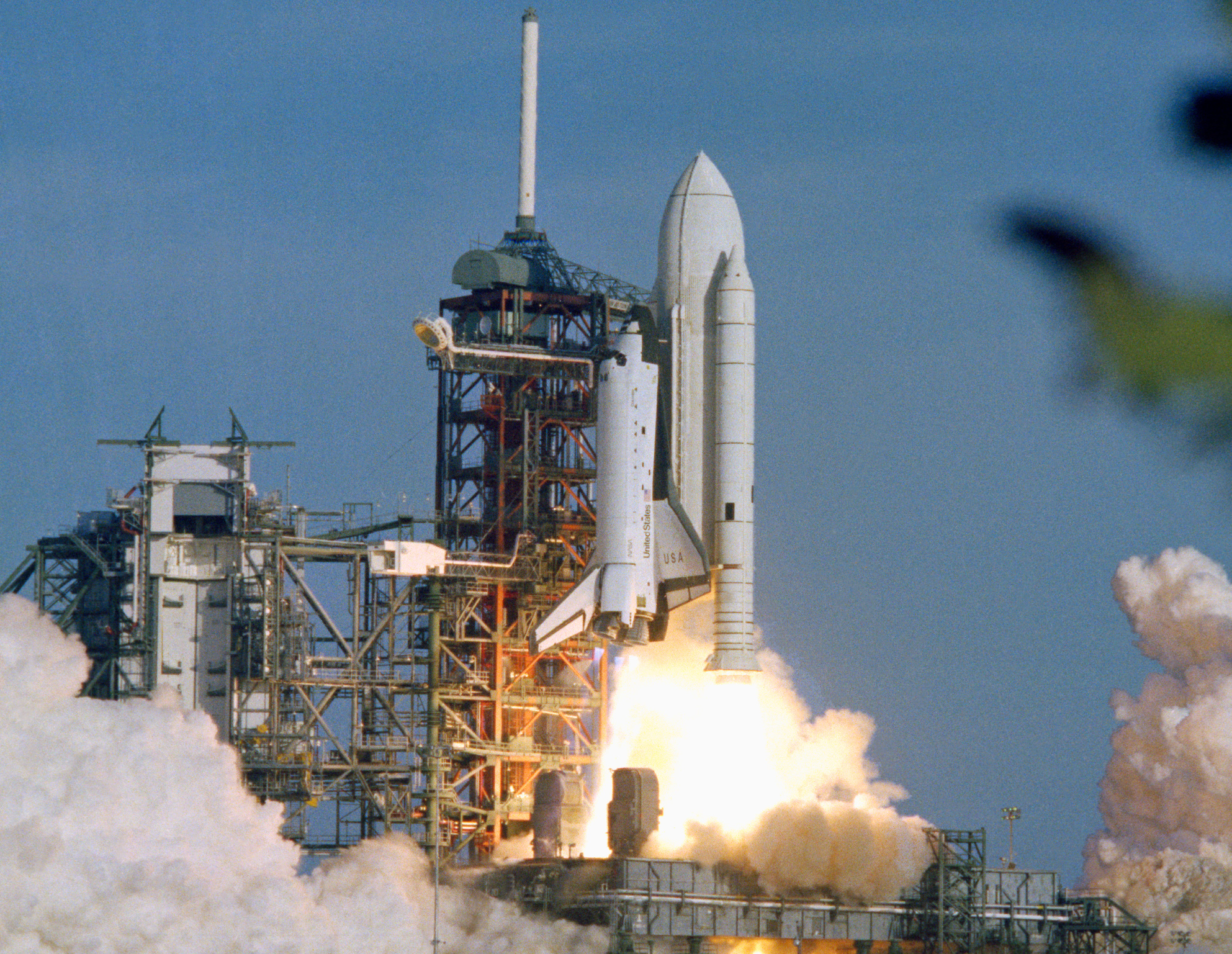 On this mission, the solid rocket booster (SRB) ignition shock knocked tiles off the orbiter’s aft end right at liftoff. This was later linked to an underestimation of the amount of water deluge needed for sound suppression for the SRBs, which was then corrected for subsequent flights.

Perhaps coincidentally,  it may seem like work is ongoing at the Starship OLM to upgrade the water deluge system. New flexible pipes have been added to the outside, and the root of this system connects to the iron water pipes that lead to the OLM from one of its legs. However, it’s yet to be seen how this will delay potential future testing of Booster 7 as it is currently sitting on the OLM for its next testing phase.

This next testing phase was partly cleared off by the previous three-engine static fire test on Aug. 31, despite one of the engines aborting at ignition. While the complete objectives of this new phase of testing and its schedule are still unclear, it is understood that Booster 7 will keep progressing with increasingly complex static fire tests with more and more engines. 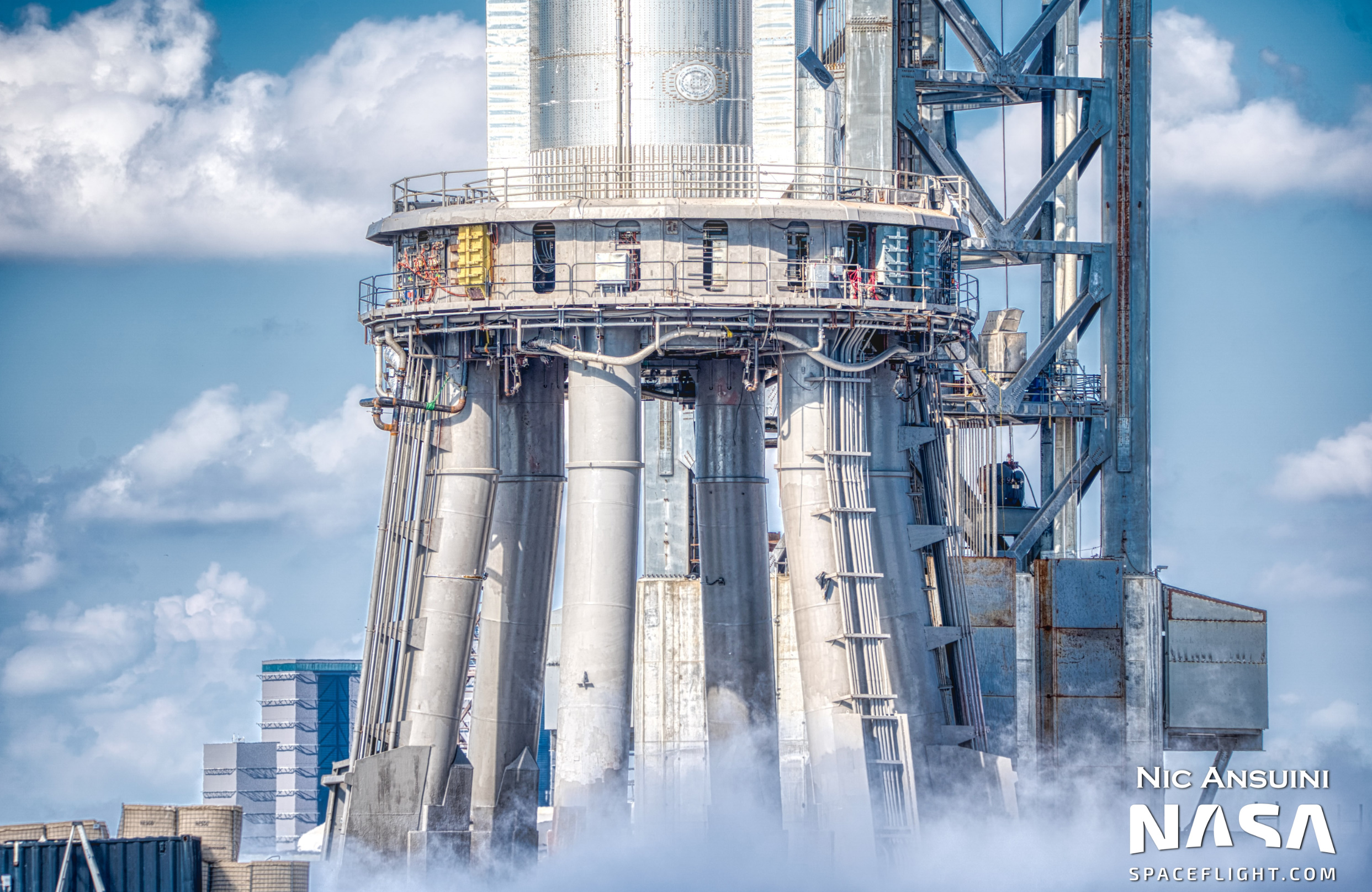 Booster 7 on the OLM. (Credit: Nic Ansuini for NSF)

Booster 7’s gradual approach to static fire testing will allow the teams to fix issues as they test and fully mature procedures and software ahead of the long-awaited orbital flight of Starship. Should this gradual testing go without a hitch, it could culminate in one or perhaps even two 33-engine static fire tests of Booster 7 on the OLM.

Once this testing is completed and any issues found fixed, it’ll be cleared to proceed into another phase of testing: Ship 24 will then be stacked on top of Booster 7 for combined tests. This could include launch countdown simulations, an eventual full-up countdown, and a 33-engine static fire test.

SpaceX hopes to complete this by mid-next month and clear both vehicles for launch shortly after. However, as we’ve seen in the past few weeks, any issues encountered during this intense test campaign could well mean a slip to later into the year and, perhaps, into next year.

Despite this, the company is preparing for an aggressive launch schedule ahead. Booster 8 is now being prepared for potential testing as teams hope to launch the second orbital flight shortly after the first one, ideally within 30 days. In addition, the vehicle is receiving its chines and other systems ahead of cryogenic proof testing not long from now.

It’s unclear where this vehicle will be tested since the OLM is occupied by Booster 7. However, one candidate location has been identified thanks to recent rolls around Starbase in the last few days.

These moves included moving two liquid nitrogen tanks to SpaceX’s property at Massey’s Way into what was once a firing range. Liquid nitrogen is commonly used as part of cryogenic proof testing of test tanks and vehicles, so the move of these tanks to this new facility would seemingly imply that it may be used in the future for such tests.

While these two tanks wouldn’t hold enough liquid nitrogen to load a booster or a ship fully, this may not be needed to perform cryogenic proof tests. It’s possible only the aft engine section and other related plumbing may be required to be proofed on these tests.

Testing tanks and vehicles in this location would free up time and resources at the launch site to focus on flight vehicles performing static fire tests and other similar dangerous activities compared to cryogenic proof tests.

Over the next few days and weeks, workers will outfit the vehicle with the hardware needed to proceed into cryogenic proof testing. If SpaceX hopes to quickly launch Ship 25 and Booster 8 right after the first orbital flight, we would likely see Ship 25 heading to the launch site for testing in the not-too-distant future.

But the construction frenzy doesn’t end there either; Booster 9 continues stacking in the Mega Bay as well. While its liquid methane tank was completed a few weeks ago, stacking is now at the halfway point for its liquid oxygen tank. Its vehicle pair, Ship 26, may have a stranger future ahead.

As previously reported, Ship 26 and Ship 27 may be undergoing a radical change in plans, omitting thermal protection system (TPS) tiles and not installing aerodynamic flaps. So far, this seems to be holding true with parts of Ship 26 seen now bare of tiles and on stand-by at Starbase’s ring yard for stacking.

Ship 27 parts are also proceeding similarly to Ship 26 parts. In some cases, there seems to be a strange mix-match of parts for these vehicles.

While engine action may seem to be ramping up at Starbase, engine testing is right now at its highest at SpaceX’s McGregor test facility further up north. 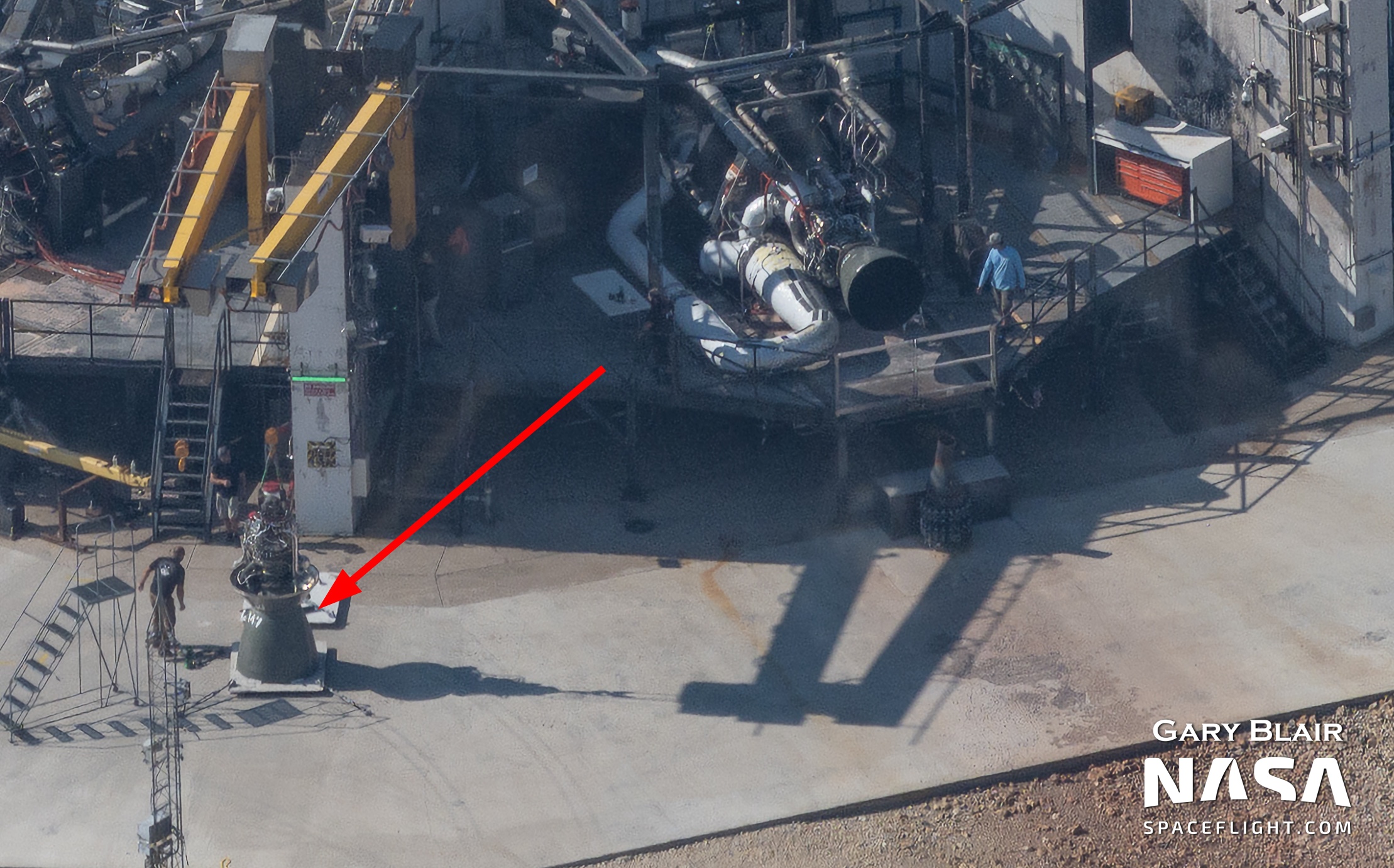 Raptor 2 SN147 was spotted (via an enhanced photo from Gary Blair flypast) in L2 McGregor.

The company completes several engine tests daily at the facility, and the highest Raptor 2 serial number seen so far on the test stands is 147.

While largely successful, these tests also suffer failures, some of which are on purpose to test different test cases and failure modes and continue developing into more powerful variants of Raptor 2.

At SpaceX’s Starship facilities in Florida, progress is continuing at a fast pace. The Starship Launch Tower is almost complete, with its last section now waiting at Launch Complex 39A (LC-39A) for lift and installation. In addition, the chopsticks, carriage system, and the ship’s quick disconnect (QD) arm are nearing completion and could be rolled out to the pad soon.

On the other hand, the tank farms at the launch complex are pushing through completion. The cryogenic LOX tank between the launch tower and the main ramp at LC-39A is now past its halfway point in the construction, and subcoolers have been installed nearby.

The former hydrogen sphere on the northeast of the complex seems to now have been fully outfitted to work as a methane tank, and a new set of pipes is being laid down to connect the methane tank farm with the cryogenics bunker being built to the north of the new LOX tank.

A more detailed outline of this progress can be found on NSF’s YouTube channel, where narrated videos of the progress of SpaceX’s facilities at Cape Canaveral are uploaded regularly.

While progress is accelerating in Florida, much hardware still needs to be completed and installed.

In February’s Starship presentation earlier this year, Elon Musk indicated the company’s desire to launch from LC-39A as early as this year. Still, internal targets now show that the first launch from there may not occur until early next year, although completion of major launch pad infrastructure is still on track for late 2022.