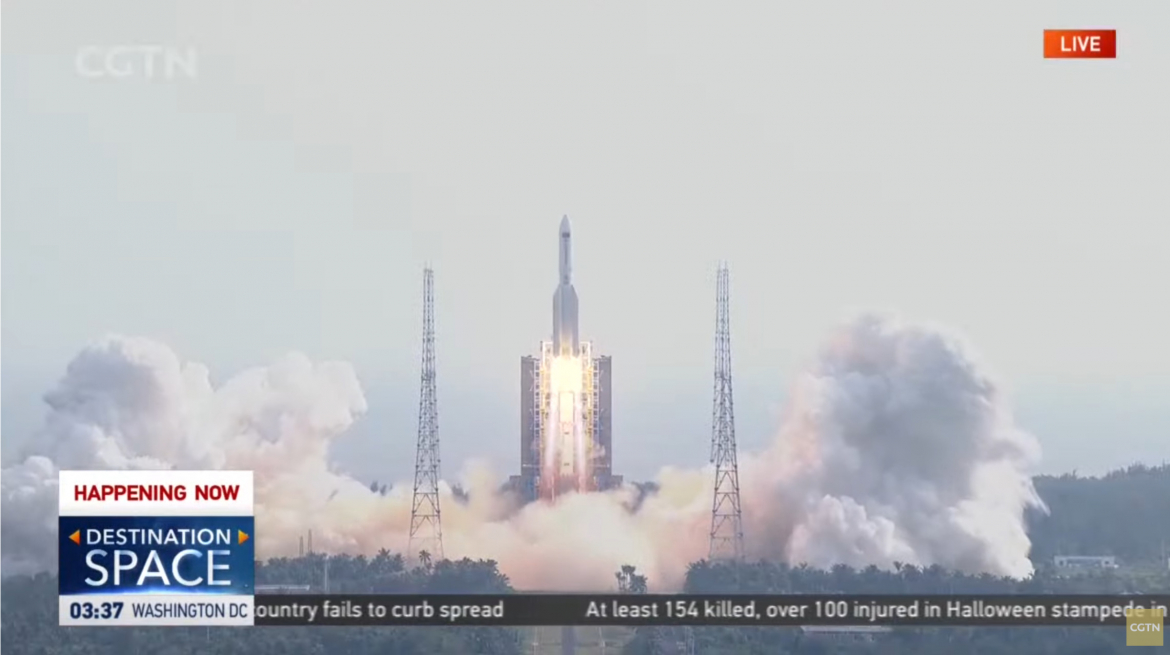 China launched its second space station module of the year aboard a Chang Zheng 5B rocket Monday. The Mengtian module lifted off at 07:37 UTC, and once docked will complete the initial phase of the construction for China’s Tiangong space station.

The launch of the Mengtian Laboratory Cabin Module, meaning “Dreaming of the Heavens,” follows the successful addition of the Wentian module to China’s Tiangong station on July 24. Like Wentian and the Tianhe core module that was launched in April 2021, Mengtian will ride into orbit aboard China’s Chang Zheng 5B (CZ-5B) rocket, also known in English as the Long March 5B.

With a mass of 23,000 kg, a length of 17.9 meters, and a diameter of 4.2 meters, Mengtian will provide space for science experiments in zero gravity, an airlock for exposure to the vacuum of space, and a small robotic arm to support extravehicular payloads. 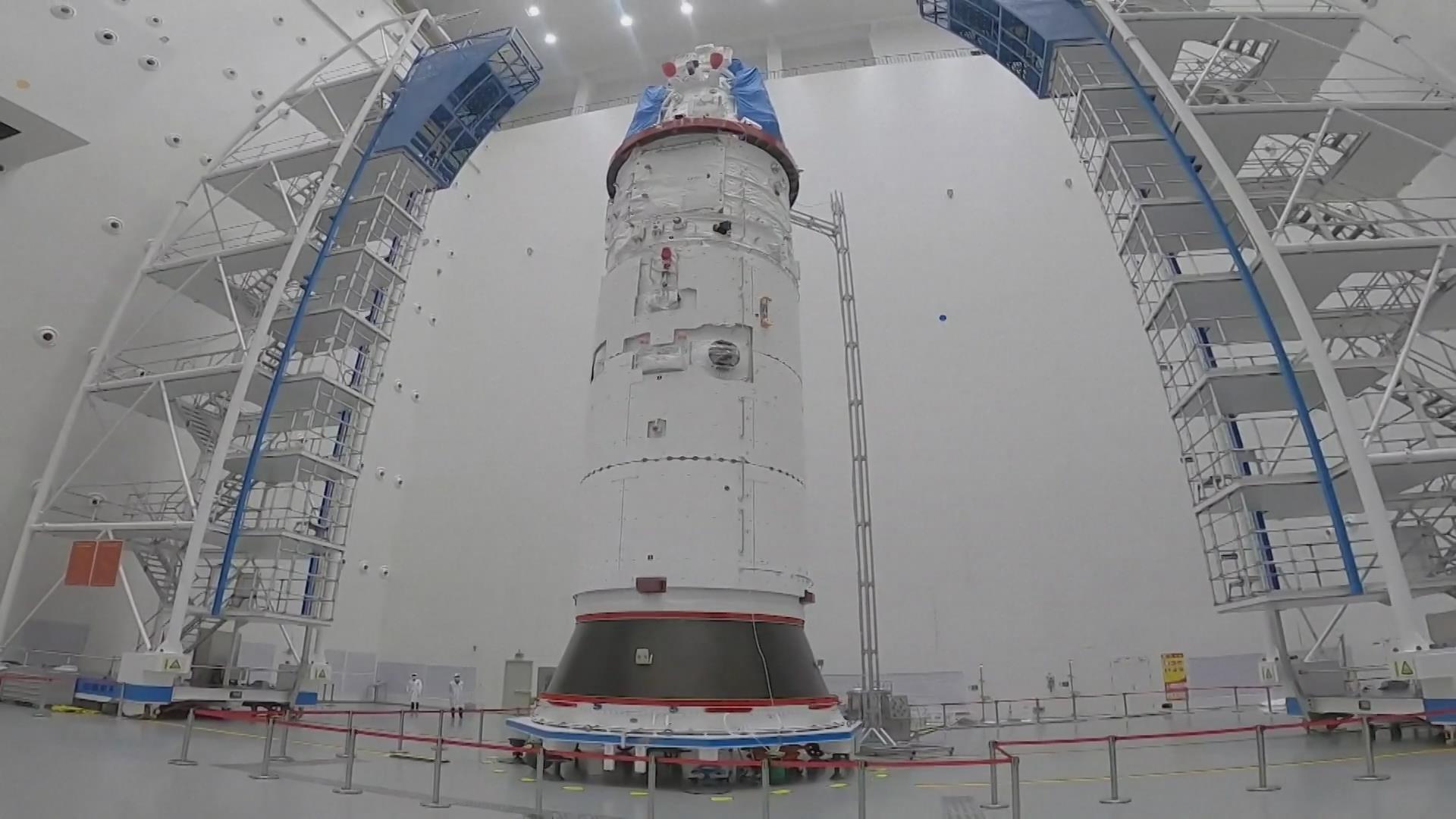 The ultracold atom experiment aims to achieve a temperature of 10 picokelvins, which would break the record of the lowest temperature ever achieved by humanity, and surpass a similar experiment that NASA has been conducting in the Cold Atom Lab onboard the International Space Station (ISS).

It is hoped that this experiment will lead to the development of a space-based cold atomic clock, based on hydrogen and rubidium. The goal is to produce the coldest atomic clock ever, which would allow for the most precise time measurement. It would not lose one second of time in hundreds of millions of years, according to Zhang Wei, director of the Space Utilization Development Center.

Once Wentian and Mengtian experimental modules dock with Tianhe, China Space Station will have in total 23 experiment racks on board. There will also be platforms for exposed experiments: 22 on Wentian and 30 on Mengtian. @CNSpaceflight
High-res version: https://t.co/gi5121YzNn pic.twitter.com/Qjo0eDiOm0

Once fully assembled, the Tiangong station will feature 23 experiment racks in its pressurized environment. The China Manned Space Agency (CMSA) has already approved over 1,000 experiments that will be conducted on board the space station over the upcoming years.

Together with the direct approach to science, the station is also being used to educate younger Chinese citizens about space. In the past, multiple Q&A sessions have been conducted from orbit, where schoolchildren could ask questions to the station’s crew members. The most recent session was conducted in March 2022. 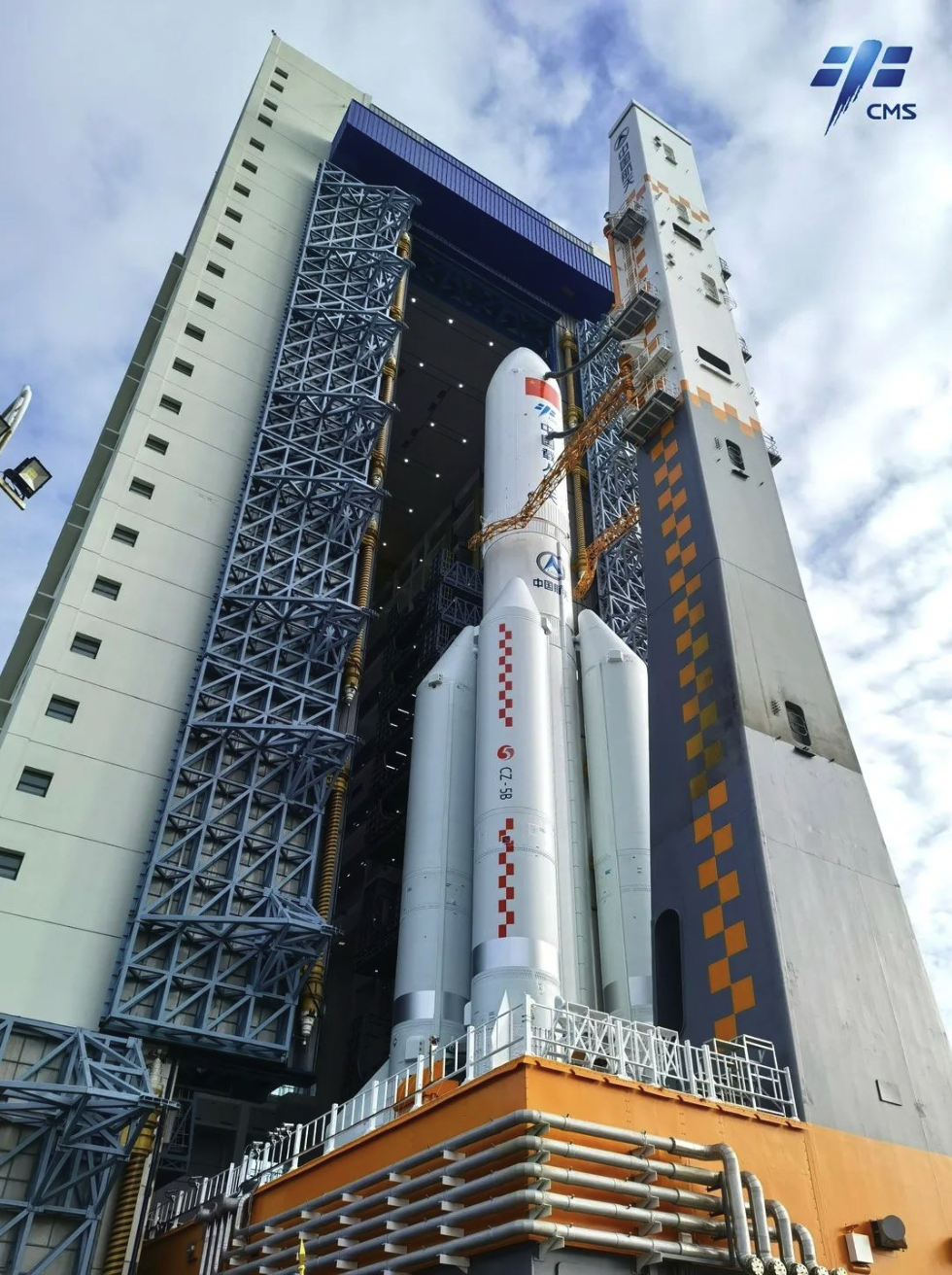 Chang Zheng 5B rolls out in preparation for the Mengtian launch. (Credit: CMS)

Outboard of the pressurized crew working compartment is the unpressurized cargo module, which also contains the airlock that the crew will use to release payloads outside of the station. Both the pressurized and unpressurized sections are equipped with reaction control system (RCS) thrusters to help steer the module during free flight, and the station after docking has been achieved.

At the far end of Mengtian is the control module. This features slots to store external experiments, a communication antenna, and two solar arrays to provide power for the station. The solar panels are initially stowed to fit the module into the fairing of the CZ-5B and will deploy shortly after launch.

Once in orbit, Mengtian will operate in free flight as it adjusts its orbit to set up a rendezvous with Tiangong. In preparation for its arrival, the Wentian module was moved to its final position at the starboard port of the station on Sept. 30. This freed up the forward port of Tianhe, where Mengtian will dock initially. After a few months on that port, it will be relocated to the port side of the station. This will give Tiangong its final T-shape, concluding its assembly phase.

The Tiangong space station — meaning Palace in the Sky — is one of two space stations currently orbiting the Earth, the other being the International Space Station. Compared to the ISS, Tiangong is relatively small, with an expected mass of about 100,000 kg once it is fully assembled. This is about a quarter that of the ISS. It orbits the Earth at an altitude of between 381 and 385 km, with an orbital inclination of 41.47 degrees.

Onboard, life is structured in China Standard Time (CST). The crew wakes up at 7:00 AM (23:00 UTC) and starts work one hour later, continuing until 9:00 PM CST (13:00 UTC). The current crew – consisting of Mission Commander Chen Dong, operator Liu Yang, and system operator Cai Xuzhe – arrived aboard Shenzhou-14 in June and are due to return to Earth in December.

Going forward, China intends to keep Tiangong crewed continuously, without gaps in human presence. Ahead of Shenzhou-14’s departure, a replacement crew will arrive aboard Shenzhou-15, currently planned to launch on Nov. 26. Another resupply of the station is planned with the Tianzhou-5 mission, due to lift off on Nov. 12.

The assembly of the Tiangong space station started with the April 2021 launch of the Tianhe core module. In July 2022, Wentian was docked, meaning November’s arrival of Mengtian will make all of the station’s initial permanent modules docked at the complex. No further plans to expand the station have yet been announced.

China also plans to launch Xuntian, the Chinese Survey Space Telescope (CSST), in December 2023. While not a part of the Tiangong space station itself, this is designed to operate in an orbit close to that of the station, allowing it to be docked occasionally for maintenance.

The telescope has a mass of 15,500 kg and is equipped with a two-meter primary mirror that will allow for a field of view 300-350 times larger than Hubble. The expectation is that it will image up to 40% of the sky using a 2.6 gigapixel camera over its operational lifespan of ten years. It will be operated by the Chinese National Space Administration (CNSA).

Mengtian launched aboard a Chang Zheng 5B rocket. The Chang Zheng 5 series are the most powerful rockets in China’s current fleet. Standing 56.97 meters tall and measuring five meters in diameter, the rocket’s core stage is augmented by four CZ-5-300 boosters that each feature two YF-100 engines. Each booster produces 2,400 kN at sea level, bringing the full thrust of the rocket at liftoff to 10,620 kN. The boosters provide most of the thrust during the early stages of flight, with the longer-burning core stage acting as a sustainer and continuing to burn until orbit is achieved.

The version used for this launch is the Chang Zheng 5B. This specification does not feature the CZ-5-HO second stage used on other versions and is used to lift very heavy payloads into low Earth orbit (LEO). Three of its four launches to date – including Monday’s – have been dedicated to the assembly of the Tiangong space station, whose modules are the heaviest payloads China has launched to LEO. 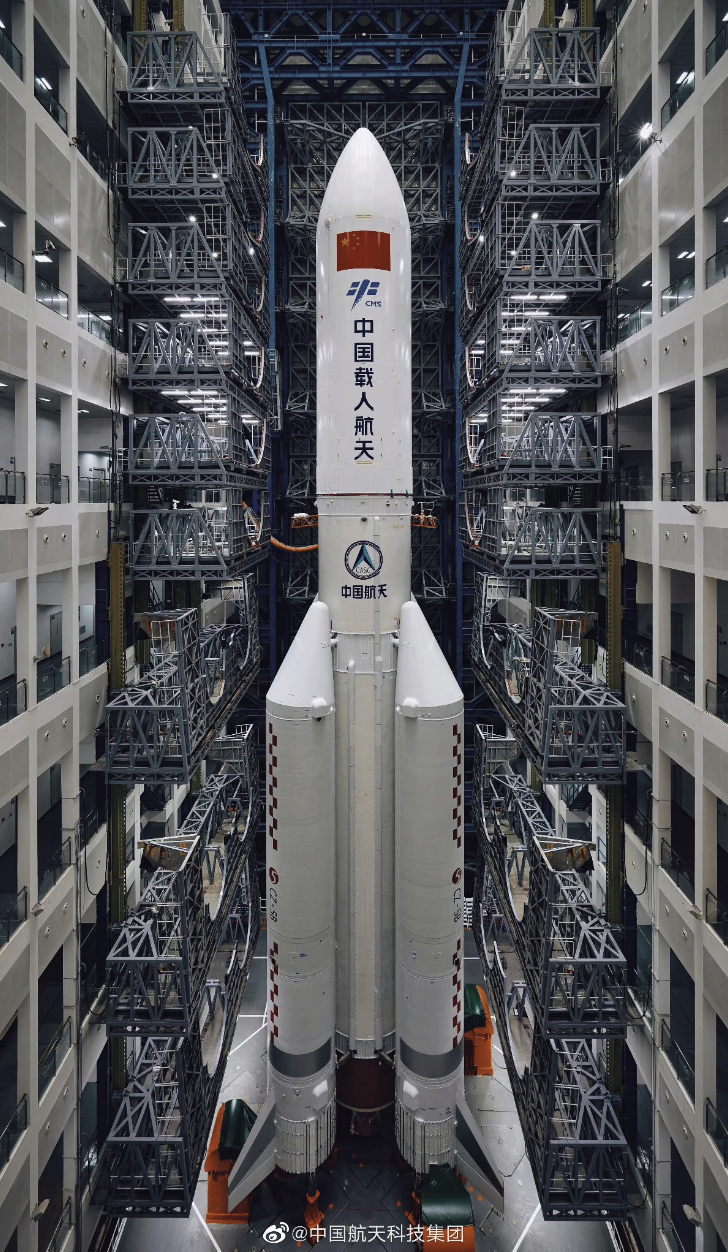 CZ-5B being prepared for its launch. (Credit: CNSA)

The design of the CZ-5B means that the core stage has to enter orbit alongside its payload. This produces a problem that has led to international criticism as the large stage is not capable of deorbiting itself, instead making an uncontrolled re-entry at any point along the path of its orbit without any way to steer it to a safe impact zone.

In the past, this led to increased social media coverage of the rocket, as people tried to track and predict the core stage after payload separation. The massive downcomer pipe in the center of the core has been spotted after reentry in the past, having survived the end of previous missions.

There was no statement for this launch that would indicate a change in approach or an installation of additional hardware that would prevent such a behavior of the rocket.

Down the line, there is another variant of the CZ-5 planned, which is called CZ-5G. This triple-core variant is the rocket that China may use to begin crewed lunar missions. It will feature up to 21 YF-100K engines in the first stage. More details about its capabilities are yet to be released, and a first flight is still many years out.

The launch took place from the Wenchang Space Launch Site, a spaceport located in Wenchang, Hainan, a location chosen in part for its proximity to the sea.

One goal in setting up Wenchang was “sacrifice zone avoidance” — ensuring that there is no potential danger to citizens in the flight path of the vehicle. Other Chinese spaceports such as Jiuquan and Xichang were located inland, and have inflicted danger to downrange villages in the past, as rocket stages and payload fairings fell back to Earth after separation.

China has conducted experiments with grid fins on some of their earlier rockets to help steer stages on the way down. These experiments have not yet gone into serial production.

Wenchang is currently used to launch CZ-5, CZ-7, and CZ-8 rockets and will also feature a commercial launch pad in the future. Mengtian will be the 20th launch from Wenchang overall, including missions from both Launch Complex 1 and 2.

The region of Wenchang also expects economic growth from the increasing launch industry. With more people moving into the region to work there, there is also a theme park area being built, a lake leisure area, and a huge coastline project involving tourism and the commercial holiday industry.