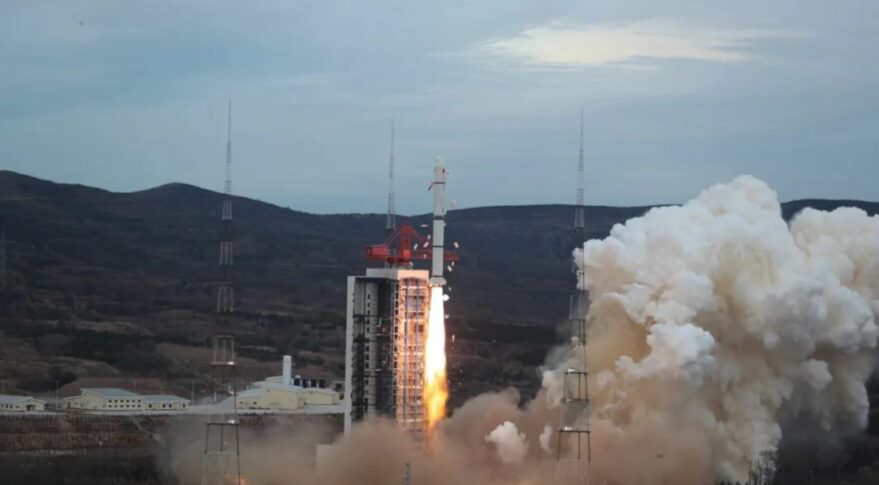 In a span of fewer than 48 hours, China has launched four observation satellites, three of them intended for military reconnaissance, and one intended for environmental monitoring. These launches were both conducted by Chang Zheng 2 family vehicles, the environmental satellite from Taiyuan in the north, and the military launch from Xichang in southwest China. 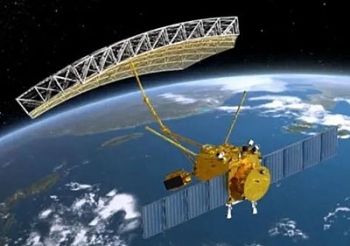 Artist’s impression of the Huanjing-2E satellite in orbit. (Credit: CAST)

The Huanjing-2E (S-SAR-01) satellite is equipped with an S-band synthetic aperture radar capable of 5-meter resolution. This satellite can observe Earth even under conditions of cloud cover or darkness, and many SAR satellites have been flown for civilian and military purposes in recent years.

The satellite, launched into a 498 by 763 kilometer, 97.65-degree inclination Sun-synchronous orbit, is intended to support disaster monitoring, environmental monitoring, agriculture, forestry, water conservation, and other purposes. Chinese emergency management and environmental authorities are expected to be the main users of this satellite.

Just under 48 hours after the Taiyuan SAR satellite launch, a Chang Zheng-2D (CZ-2D) conducted a successful mission from the Xichang Satellite Launch Center in Sichuan Province. The CZ-2D launched three military reconnaissance satellites known collectively as Yaogan 36. Some sources have stated that these satellites are part of Group 02, though this was not confirmed after the launch by Chinese state media.

The launch took place on Friday, Oct. 14 at 19:12 UTC from Launch Complex-3 (LC-3) at Xichang. For this flight, the CZ-2D used a longer fairing to accommodate the Yaogan 36 payload.

Though little is known about the satellites’ purpose, it is known that the flight launched four objects into an orbit inclined 35 degrees to the equator. The orbital altitudes of the four objects vary slightly.

There are three satellites listed by many sources for the Yaogan launch, and the fourth orbiting object is likely the CZ-2D’s second stage. Interestingly, the patch that was released for this mission after the launch shows a solar sail. The CZ-2D’s payload adapter is equipped with a solar sail to speed up the stage’s deorbit process and prevent it from becoming a problematic item of space debris.

The Yaogan satellites are the latest in a long series of military satellites launched by China starting in 2006. These satellites are typically launched by CZ-2 or CZ-4 family rockets, themselves based on hypergolic-fueled ICBM technology. Although newer vehicles are now flying, the CZ-2, CZ-3, and CZ-4 based on the older-technology DF-5 missile are still workhorses for the Chinese civilian and military space programs.

Further launches in the Huanjing and Yaogan series are likely planned, with 11 satellites total planned for the Huanjing series. Yaogan satellites have been launched every year since 2006. The Huanjing-2E and Yaogan 36 launches are the 45th and 46th orbital launches from China this year, respectively. In addition, the Yaogan launch was the 444th flight of the entire Chang Zheng family of vehicles.