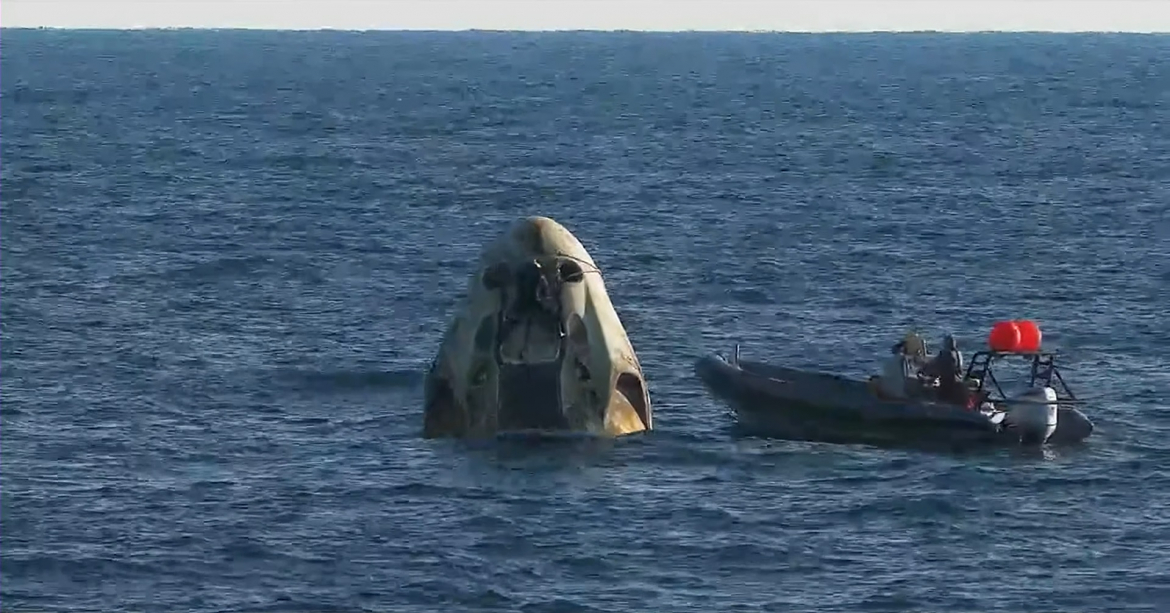 After living and working aboard the International Space Station (ISS) for close to six months, Crew-4 and its crew of international astronauts have undocked from the orbiting laboratory and made their return to Earth.

Crew-4 launched on April 27, 2022, aboard a SpaceX Falcon 9 rocket. The booster used on the mission was B1067-4, the same booster that launched a previous NASA/SpaceX crew mission, Crew-3.

The Dragon used on this mission is C212. C1212 was officially named Freedom by the crew of Crew-4, as the first crews of a new Crew Dragon spacecraft choose the name of the vehicle.

Upon undocking from the International Docking Adapter-3 (IDA-3) zenith (or space-facing) port of the ISS’s Harmony node, Crew Dragon Freedom began performing a series of four departure burns to safely maneuver Crew Dragon and its crew away from the station.

The first departure burn, known as departure burn zero, begins just a few seconds after undocking and lasts approximately 16 seconds. Departure burn zero takes the spacecraft up and around the station in preparation for the next series of burns. Once the burn concludes, Crew Dragon Freedom enters a short coast phase ahead of its next burn.

A few minutes after undocking, departure burn one begins. Lasting approximately 20 seconds, this burn takes the spacecraft on a trajectory to the front of and below the ISS. Shortly after this burn concludes, Dragon exits the “keep-out sphere,” an imaginary safety boundary extending 200 meters away from the orbiting laboratory.

After departure burn one concludes, the crew is given the go-ahead to doff, or take off, their suits. The crew wears their suits during the undocking procedures as a safety precaution.

Departure burn two is the next burn, coming 50 minutes after the completion of departure burn one and lasting approximately 44 seconds.

After one more coast phase, Dragon performs the fourth and final departure burn, lasting just over one minute. Once the final burn is complete, Dragon is in a stable low-Earth orbit approximately 10 km below the ISS.

Once all departure burns were complete, the next major milestone was the separation of Dragon’s trunk, which is followed shortly after by the de-orbit burn. During the de-orbit burn, Freedom fired its four forward-facing Draco engines, which are located around the docking port at the nose of the capsule, and performed the longest burn of the mission. Following the completion of the burn, the docking port nosecone was closed in preparation for re-entry.

During re-entry, the mission entered a communications blackout period. At this time, the intense heat and plasma that forms around the vehicle due to Dragon’s immense speed prevented ground stations from exchanging communications with the crew and the spacecraft. This phenomenon is not unique to Dragon, however, as every crewed spacecraft in history that has returned to Earth has experienced some sort of blackout period during re-entry. 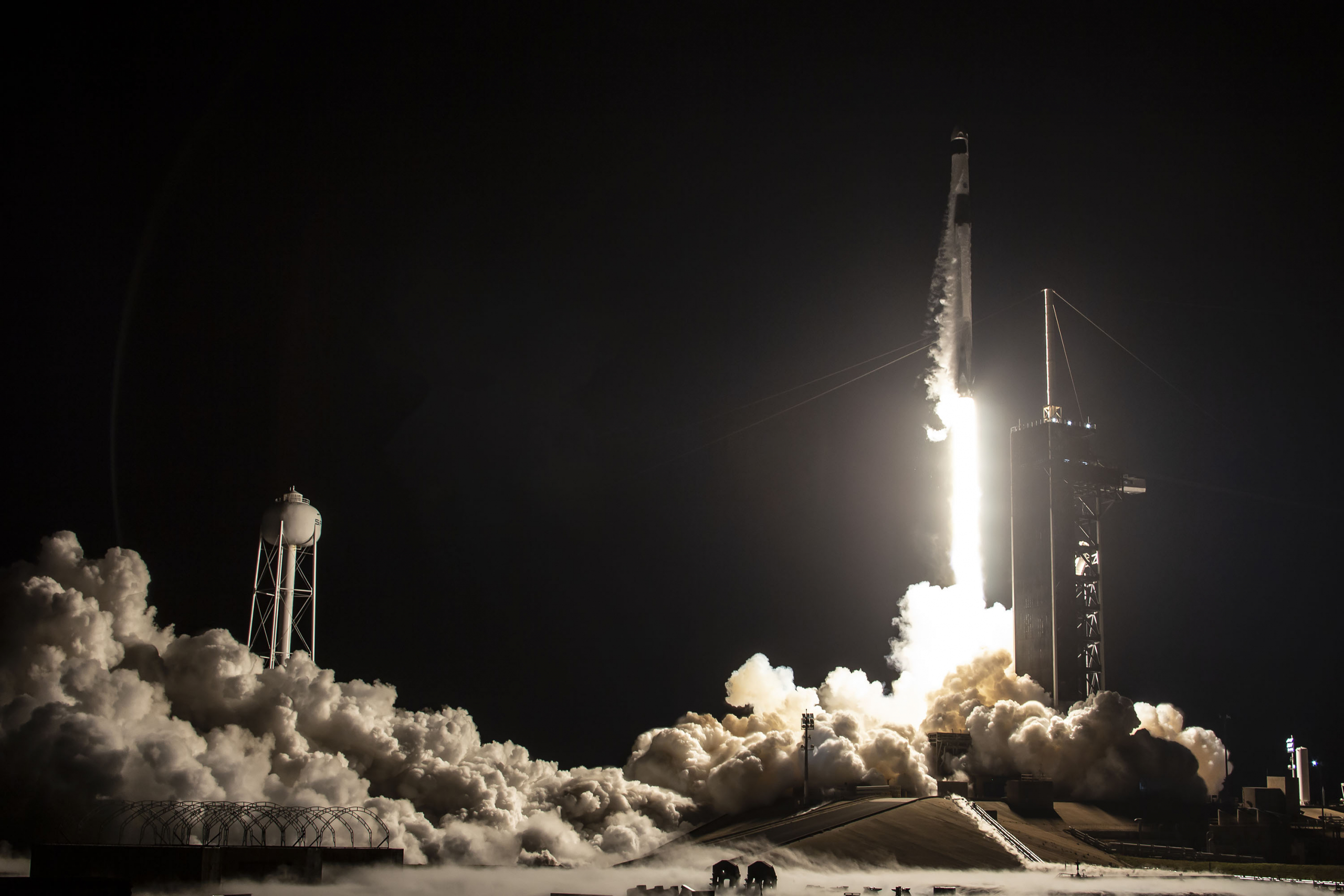 After the plasma phase of re-entry, Freedom continued to slow down as it descended through the atmosphere, which becomes thicker and thicker the lower the spacecraft gets. Once Freedom has detected that it is at a certain altitude and velocity, it deploys its two drogue parachutes and slows down to ~350 miles per hour.

The parachutes partially deploy at first before fully inflating in a process known as reefing. Reefing allows parachutes to open in a slower and more-controlled manner to avoid higher loads on the vehicle and crew during descent.

The main parachutes slow the vehicle down from ~350 miles per hour to around ~15 miles per hour for splashdown. After descending under the main parachutes for several minutes, Crew-4 splashed down in the Atlantic Ocean east of Jacksonville, Florida. This site was selected over alternatives in the Gulf of Mexico or elsewhere in the Atlantic Ocean based on weather conditions at the time of splashdown. 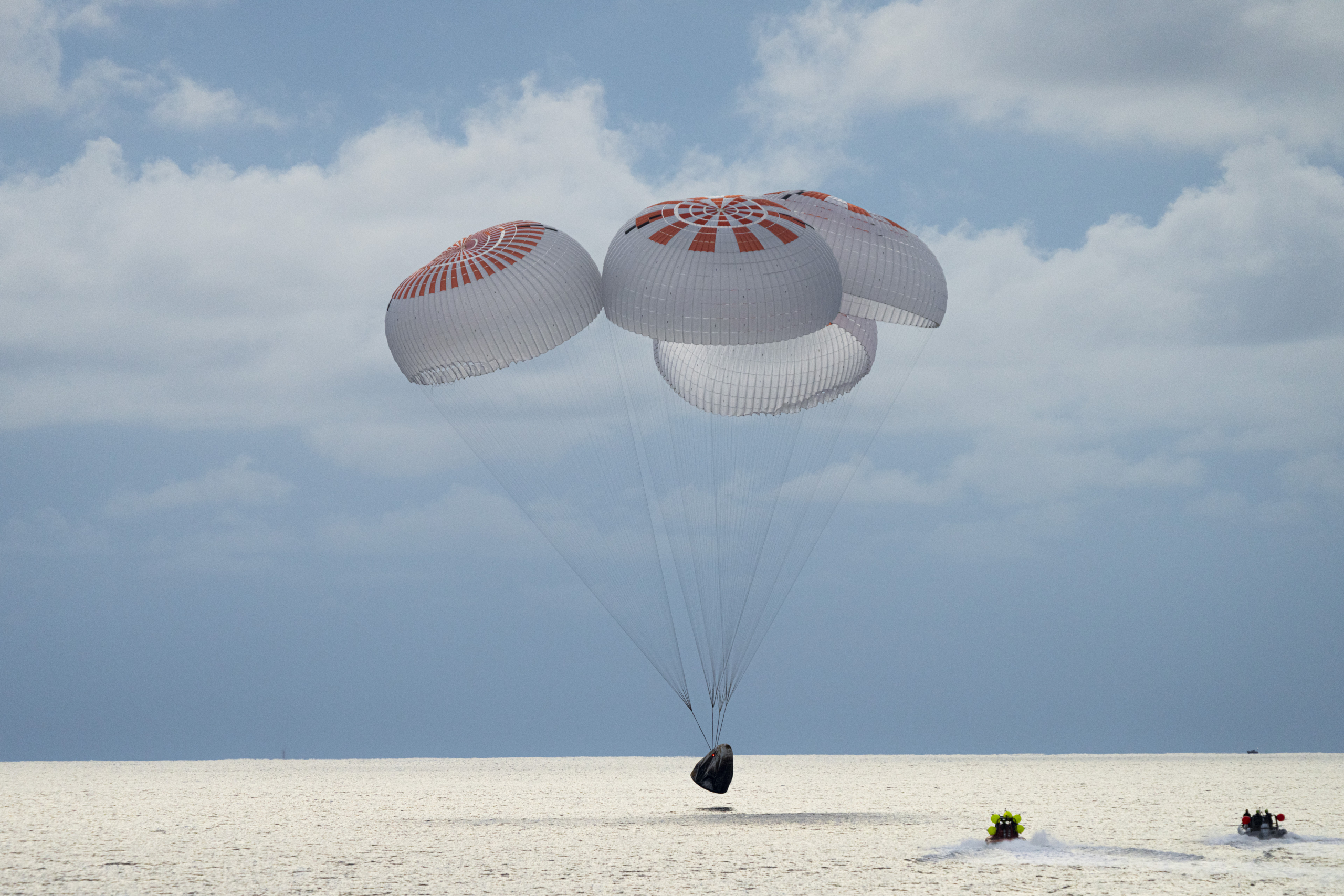 If weather had forced a splashdown location in the Gulf of Mexico, SpaceX recovery ship Shannon would have supported Crew-4 recovery operations. Shannon is named in honor of the first female astronaut aboard a SpaceX spacecraft, Shannon Walker.

Before the recovery vessel approaches Freedom, the capsule is visited by two of SpaceX’s recovery fast boats. The purpose of these small vessels is to quickly approach the spacecraft and ensure that Freedom is safe enough to be lifted out of the water and onto the deck of the ship.

Additionally, these fast boats recover the capsule’s parachutes, which are cut from the spacecraft at the moment of splashdown. Once an all-clear call is given, crews from the fast boats begin preparing the capsule for the lift.

Once safely on the deck of the vessel, SpaceX’s recovery crews perform one final check of the capsule to ensure there are no propellant leaks or other hazards ahead of crew egress. Crew egress then follows in quick succession with each crew member being assisted out of the capsule, officially concluding SpaceX’s Crew-4 mission to the International Space Station.