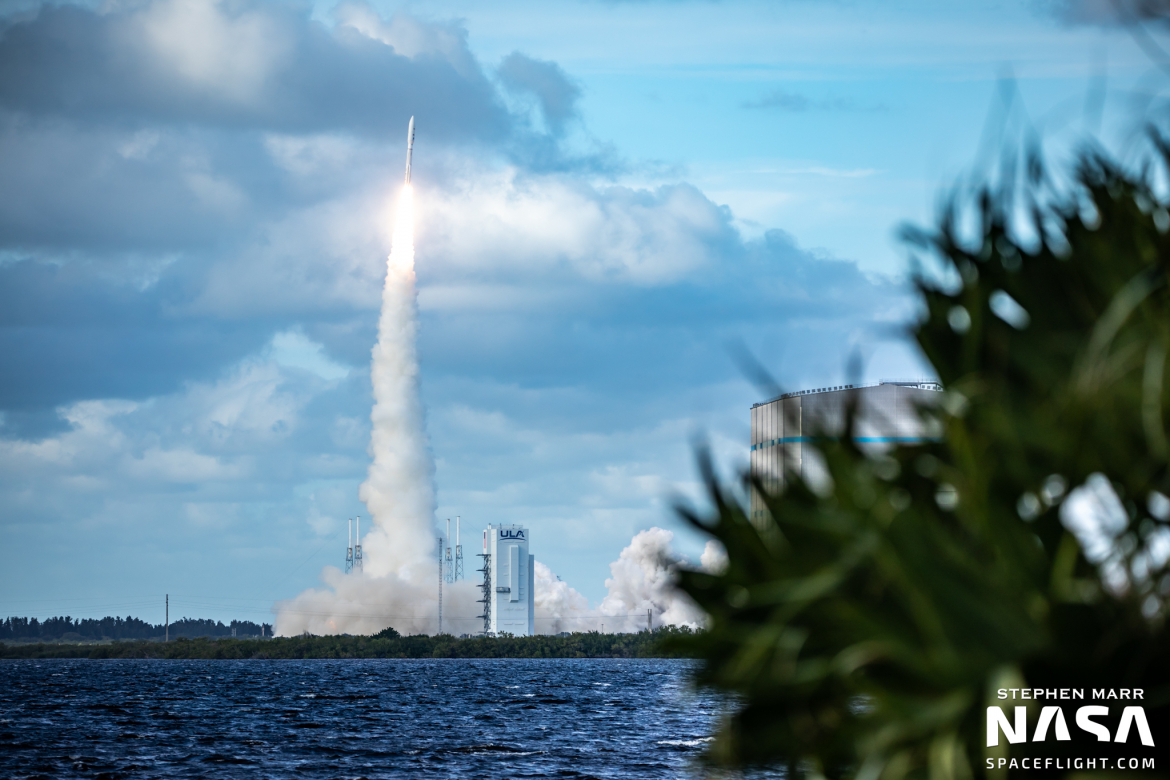 United Launch Alliance (ULA) has launched the dual-manifested SES-20 & 21 telecommunication satellites on the final Atlas V 531 rocket to a near-circular geosynchronous orbit (GSO). The Atlas V launched from Space Launch Complex-41 (SLC-41) at the Cape Canaveral Space Force Station (CCSFS) on Oct. 4 at the opening of the window at 5:36 PM EDT (21:36 UTC).

The 45th Weather Squadron first predicted an 80% chance of favorable weather, which improved to 90% just over five hours ahead of the opening of the window.

SES-20 & 21 was ULA’s first launch for SES and Atlas V’s third for the company. The two satellites are the latest of up to six satellites for the company’s accelerated C-band clearing plan to meet the FCC’s 5G rollout plan.

The Atlas V rocket is ULA’s workhorse rocket. Atlas V’s first mission occurred in August 2002 with the Eutelsat Hotbird-6 telecommunication satellite. Including its maiden flight, Atlas V has completed 95 missions, 19 of which were commercial launches, and 10 of these were telecommunications satellites.

With 21 launches remaining before Atlas V’s retirement, the Atlas V has a near-spotless record since its maiden flight. The Atlas V designated for SES-20 & 21 was AV-099.

Atlas V is a two-stage liquid-fueled launch vehicle with up to five optional solid rocket boosters (SRBs). This mission used three of these boosters.

On the Atlas V first stage, up to five GEM-63 boosters can support the initial part of the flight. These boosters first supported the NROL-101 mission during an earlier Atlas V 531 flight in November 2020. Manufactured by Northrop Grumman, the GEM-63s are smaller versions of the GEM-63XL boosters to be used for the Vulcan rocket.

Each booster generates 1,652 kN of thrust and burns for about 94 seconds.

The first stage uses a single Russian-built kerolox RD-180 engine. This engine generates 3,828 kN of thrust with a specific impulse of 337 seconds. This stage is 32.5 meters long, 3.81 meters in diameter, and burns for about four minutes.

The final Atlas V 531 configuration has lofted SES-20 & 21 towards their target orbit. Only 21 launches remain for Atlas V which will soon share a pad with ULA's new Vulcan rocket.

The second stage is the Centaur upper stage, an iconic staple of the Atlas family. Centaur took its first flight in May 1962 and has evolved in its 60-year flight history. Atlas V uses the Centaur III/Common Centaur introduced with Atlas III.

The historic Aerojet Rocketdyne RL10C-1-1 engine powered Centaur to place the SES 20 & 21 satellites into their intended orbit. The RL-10 uses liquid hydrogen (LH2) and liquid oxygen (LOX) generating 106 kN of thrust with a specific impulse of 453.8 seconds. The RL10C-1-1 variant first supported the SBIRS GEO-5 mission in May 2021.

Centaur also houses the avionic systems for the Atlas V rocket. The upper stage is 3.05 meters in diameter and 12.6 meters in length.

The Atlas V’s 5.4-meter payload fairing encapsulates the Centaur and the two satellites, protecting the payloads during ascent. Manufactured by Beyond Gravity, this payload fairing supports the 500-series of Atlas V rockets. The Atlas V fairing comes in three lengths, with the short version being used on this mission.

For this mission, Atlas V launched in its 531 configuration. The first digit denotes the diameter of the payload fairing, the second indicates the number of solid rocket motors, and the third represents the number of RL-10 engines on the Centaur upper stage.

On SES-20 & 21, the Atlas V had a five-meter fairing with three GEM-63 boosters and a single RL10C-1-1 engine. This flight was the 531 configuration’s final flight before Atlas V’s retirement.

ULA began preparations for the mission in late-August 2022. Atlas V’s first stage booster was first to be delivered to SLC-41’s Vertical Integration Facility (VIF) and placed vertically on the Mobile Launch Platform (MLP). Between Aug. 30 and Sept. 1, the three GEM-63 SRBs were delivered and attached to the first stage.

The next day, ULA hoisted Centaur atop the first stage. On Sept. 20, ULA stacked the fairing and payload on the Centaur upper stage. Payload stacking completed the rocket ahead of launch. 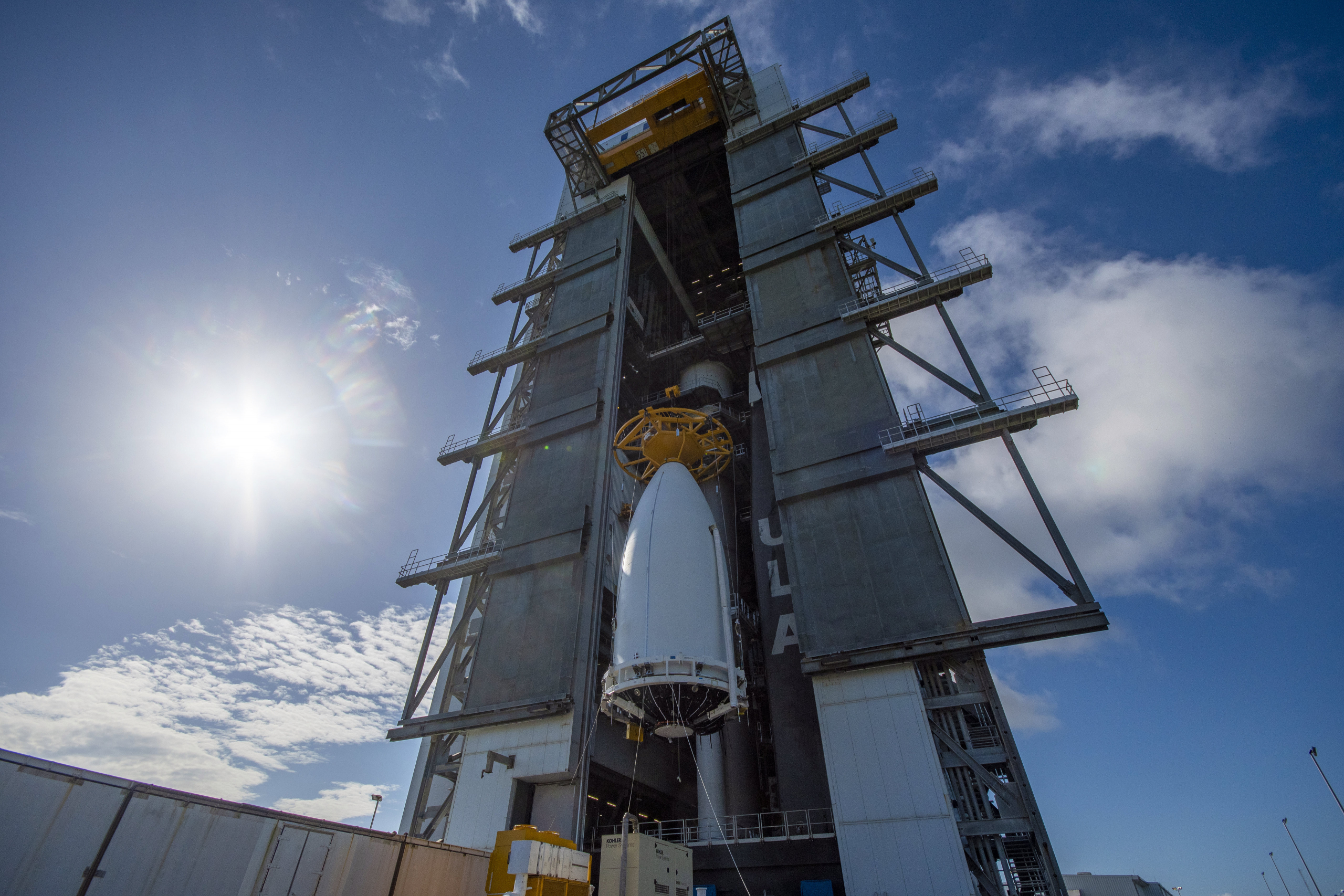 The company was founded in 1985 and operated as Europe’s private satellite provider in Luxembourg. SES began launching satellites under the Astra series in the 80s using European, Russian, and American launch vehicles.

Since then, SES has been growing its constellation with geostationary SES and medium Earth orbit (MEO) O3B satellites. SES has partnered with other providers, including Arianespace and SpaceX, to keep up with the growing constellation.

Since 2010, SES has seen 28 launches from multiple launch providers for its SES, Astra, and O3B satellites. Most recently, SpaceX launched the SES-22 mission as the first of multiple missions in the next few years for SES. SES-22 was the first of up to six satellites for SES’s C-band satellites. Since its launch in late June, SES-22 has already entered service.

We’re pleased to announce that SES-22 is now in service! 🛰️ Manufactured by @Thales_Alenia_S & launched by @SpaceX, #SES22 is delivering TV & radio to millions of American homes & providing other critical data transmission services.

The Boeing 702SP is the smallest variant in the 702 satellites series. Each satellite has a mass of 1,500-2,300 kg with its customer’s payload. Since its introduction in March 2015, five satellites have used this variant. SES is one of the previous customers of this variant, with the SES-15 satellite.

A feature of the lightweight 702SP bus allows two of the same type to launch simultaneously—the dual satellite configuration for two Falcon 9 flights in 2015 and 2016. SES-20 & 21 is the third flight using this configuration. 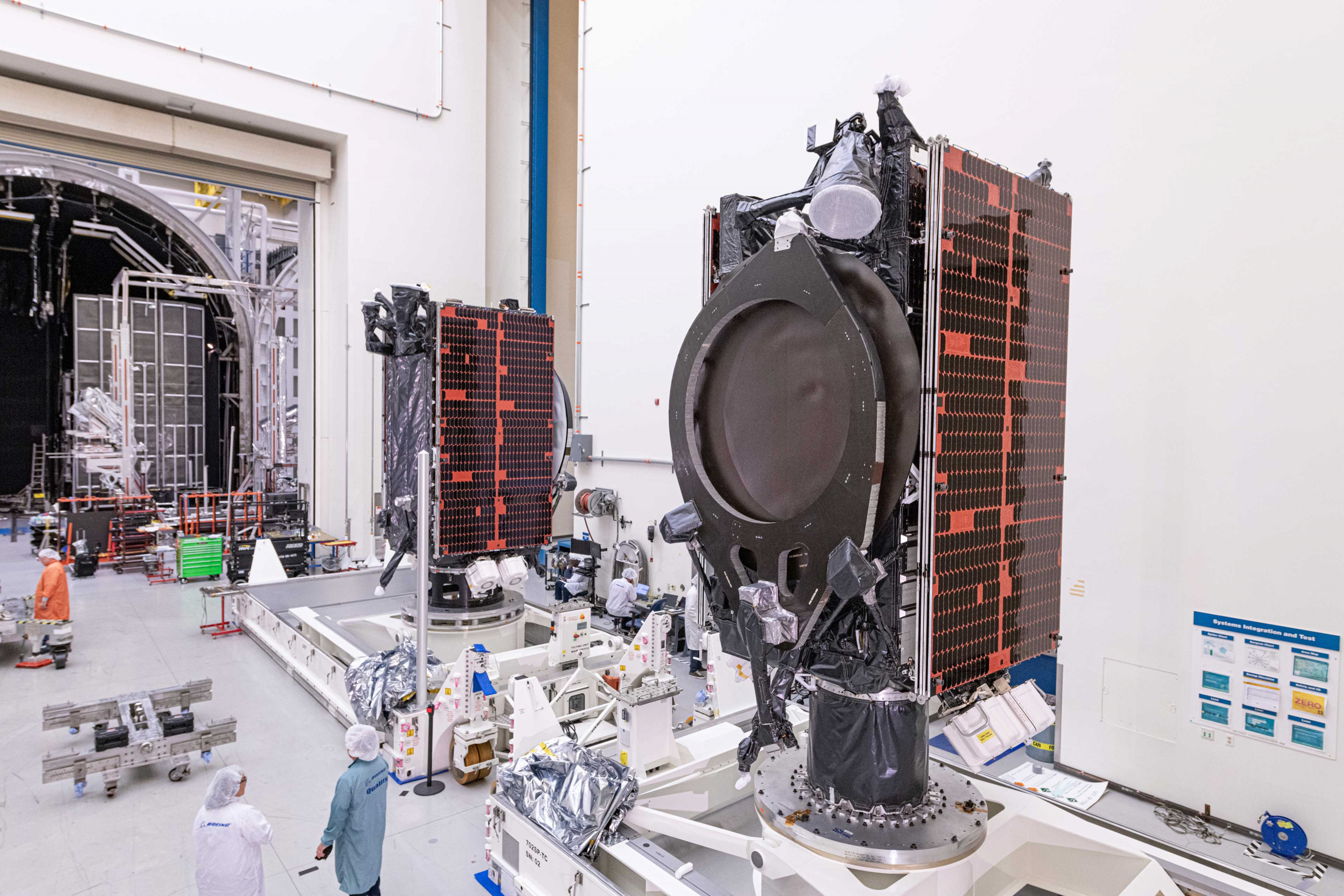 The four C-band satellites will help SES to clear 280 MHz of mid-band spectrum for 5G use while seamlessly migrating SES’s existing C-band customers. SES will use these satellites as a part of the company’s accelerated C-band clearing plan to meet the FCC’s objectives to roll out FG services, with a deadline at the end of 2023.

On the satellites are 10 C-band transponders. The transponders, controlled by multiple steerable antennas, will have thousands of narrow steerable beams and the ability to isolate interference sources. The antennas will allow SES and customers to expand, extend, or change the satellite coverage area and its mission.

Equipped on each satellite are four all-electric xenon-ion propulsion system (XIPS) thrusters for on-orbit orbital adjustments and maneuvering. Twin solar arrays will power each spacecraft. Both spacecraft will have an orbital lifespan of 15 years.

In the same month, SES ordered SES-22 and SES-23 from Thales Alenia Space (TAS) as backup “spare” satellites. These satellites are used as backups if the other satellites suffer a launch or satellite failure. SES-22 has launched; however, SES-23 stands as a ground-ready spare unless needed. SES-18 & 19 will embark on a flight-proven Falcon 9 in a similar configuration to SES-20 & 21. 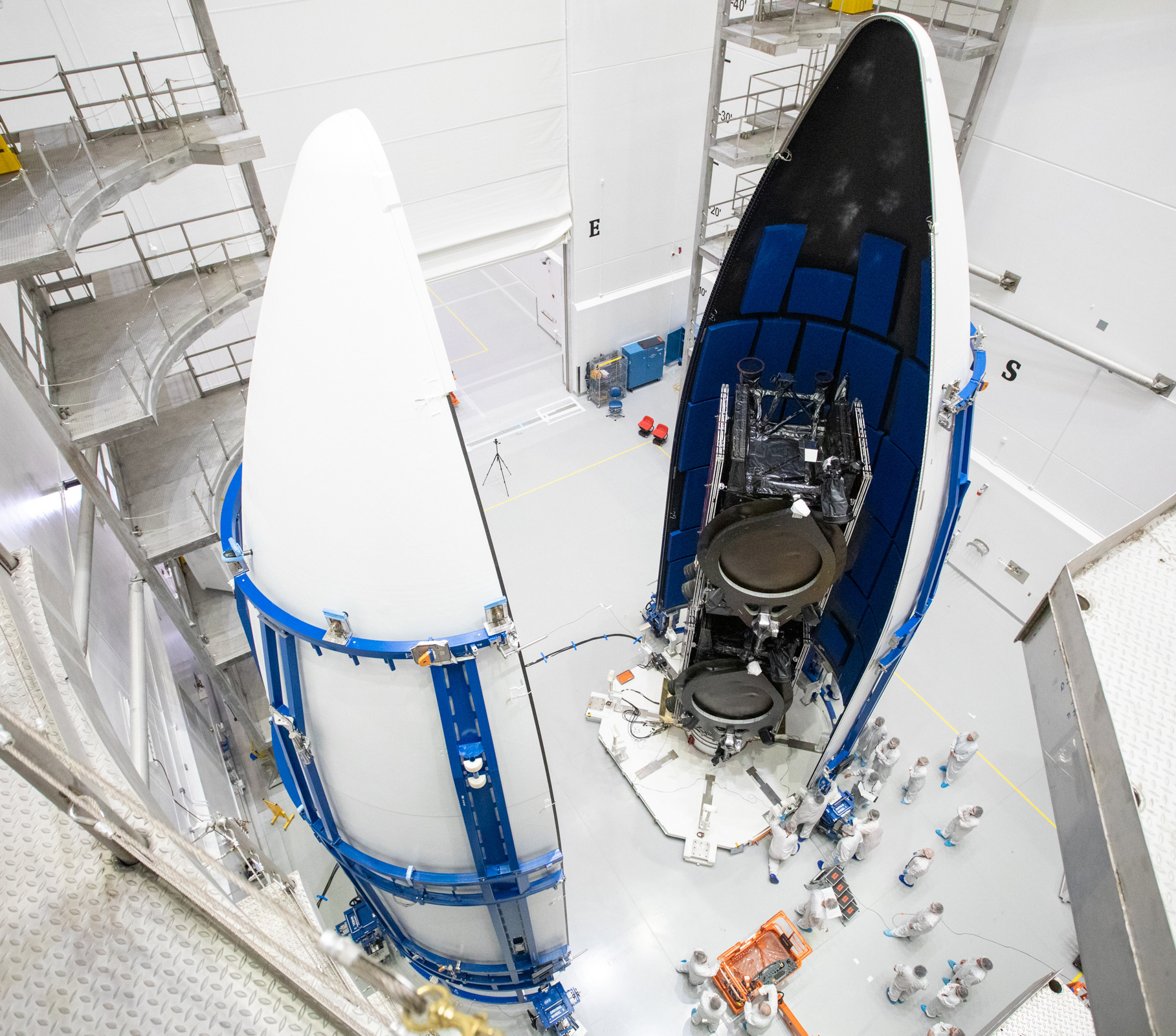 With the rocket completed and testing finished, the launch teams underwent a launch readiness review (LRR) to determine if the rocket and satellites were ready for launch. The LRR was completed on Oct. 2, allowing the MLP to roll the Atlas V from the VIF to the launch site 550 meters south on Oct. 3. Arriving at the launch site, ULA loaded room-temperature RP-1 onto the rocket.

The final launch countdown begins a few hours before launch, with the pad teams clearing the launch site. At L-3 hours, the first of two planned holds begins. This hold allows the team to check all the systems and conduct a poll for final propellant loading.

Primary propellant loading is complete around L-40 minutes, with the teams transitioning to propellant topping. At L-34 minutes or T-4 minutes, the second and final planned hold beings. This 30-minute hold allows the teams to complete the last checkouts before launch.

Weather balloons are released, and the Denver Operations Support Center collects the data to determine what steering profile Atlas should use with the predicted winds.

At L-7 minutes, the ULA Launch Conductor and launch team complete the final Go/No-Go poll. Once the poll is complete and authorization to proceed is received, the countdown resumes at T-4 minutes. The range and rocket are ready to launch at T-55 seconds, with the final status check at T-25 seconds.

The RD-180 engine ignites at T-2.7 seconds, and four seconds later, the three GEM-63 boosters ignite, generating the thrust to lift the vehicle off the pad. 5.6 seconds later, Atlas begins a pitch and roll program to reach the proper flight profile while minimizing the loads on the rocket.

Atlas V reaches the speed of sound 40.2 seconds into flight. Eighteen seconds later, Atlas V passes maximum aerodynamic pressure (Max-Q), where the aerodynamic forces against the rocket are at their peak.

The RL-10 engine burned for eight minutes to reach an initial low Earth parking orbit. Centaur completed a 12-minute coast in this orbit before its second of three burns. Just above the west African coast, Centaur completed a five-minute burn to reach a geostationary transfer orbit with an apogee near 36,000 km.

#AtlasV successfully streaks through the sky carrying #SES 20 & 21 to space. Gorgeous skies led to a beautiful liftoff of the final 531 variant!

You can learn more about the mission here: https://t.co/9H3XXq6FV9 pic.twitter.com/645NF6IZGW

Following the burn, Centaur completed a five-hour coast to apogee. Centaur reignited for its third and final time at five hours, 33 minutes, and 38 seconds into the flight. This burn lasted two minutes and 14 seconds to reach a near-circular 35,000 km with an inclination of 1.91 degrees.

Centaur vents all its remaining propellants through the RL-10 engine 30 minutes after SES-21 separation. Its mission is complete just over seven hours after launch.

Both satellites will undergo standard on-orbit testing to ensure all of the satellite systems are functional. Once through testing, SES will declare the satellites operational and begin using them for customer services. The two satellites will be able to deliver C-band broadcast, radio services, and critical data networks to said customers.

For both ULA and SES, the year is not over yet. Next up for ULA is their final Atlas V launch using the 4.2-meter fairing and the final Atlas from SLC-3E at Vandenberg Space Force Base (VSFB). Atlas V 401 (AV-098) will carry NASA’s JPSS-2 and LOFTID reentry demonstration vehicle. JPSS-2 will launch in November 2022.

This just in — the team at @BoeingSpace has #O3bmPOWER in the thermal vacuum chamber! Crucial step as we prepare to launch later this year 🚀 pic.twitter.com/UqxrbzDQgy

In Q4 2022, a flight-proven Falcon 9 will launch the two SES-18 & 19 satellites to GTO. Around the same time, up to three more Falcon 9s will each take two O3b mPOWER satellites to MEO.

Another O3b mPOWER flight will have three satellites on Falcon 9 in Q1 2023. A final mPOWER flight will also take place in 2024, using a Falcon 9. O3B mPOWER is SES’s second generation MEO satellite constellation using an MEO variant of the Boeing 702 satellite bus. Boeing is currently testing and finalizing the satellites before their delivery to CCSFS.

SES still has three satellites with unassigned launch vehicles. Astra 1P and 1Q will launch in 2024, and SES-26 in 2026.