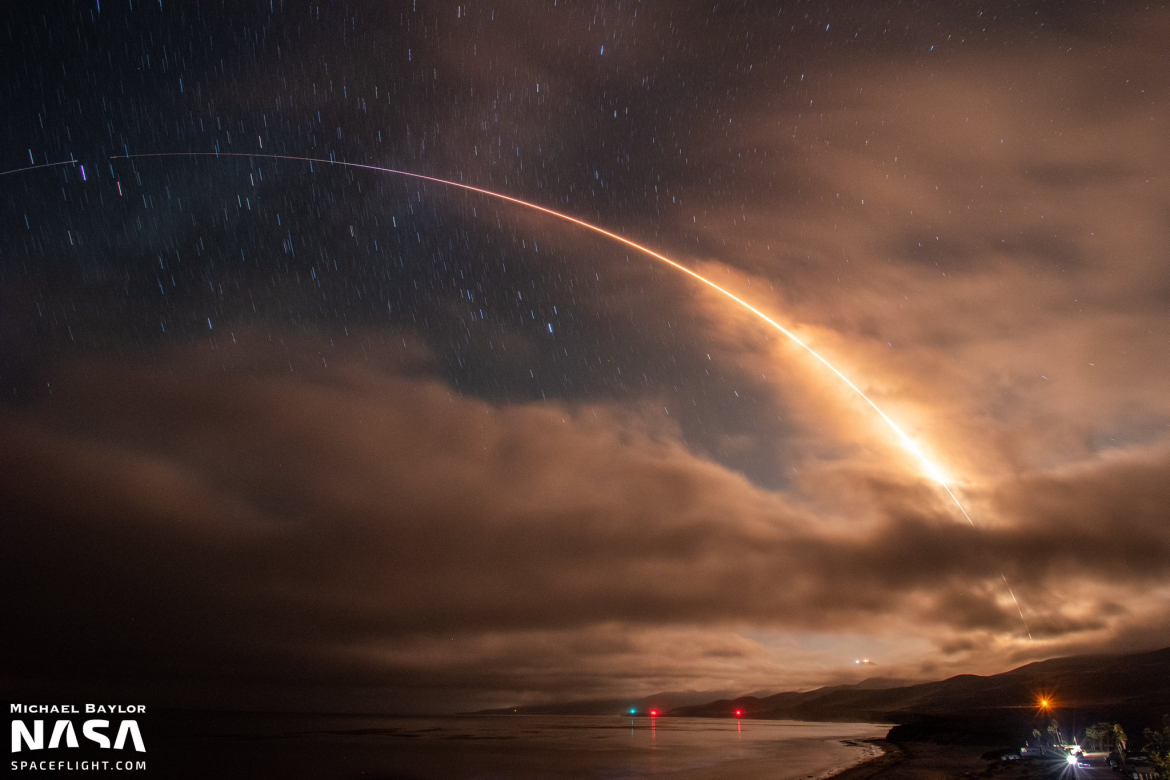 With the goal of successfully reaching orbit, Firefly successfully launched FLTA002 – its second demonstration flight of the Alpha launch vehicle – on the mission dubbed “To The Black.” Launching from Space Launch Complex 2 West (SLC-2W) at the Vandenberg Space Force Base in California, the vehicle lifted off at 12:01 AM PDT (07:01 UTC) on Oct. 1.

A scrub on Friday morning came after a hold was called at T-0 during engine ignition.

Firefly’s first orbital launch attempt was terminated during the first stage burn on Sept. 3, 2021, following an engine failure 14 seconds into launch. Despite this engine shutdown, the vehicle was able to maintain control for nearly two and a half minutes, before tumbling, leading ground operators to activate the flight termination system.

Firefly was able to recover the engine assembly downrange, allowing them to figure out that the engine shut down early due to pins failing in the power line to the main engine valves, causing them to close and shut the engine down. This failure mode was backed up with data received from the vehicle, which reported a drop in current on the power rail and the closure of the valve.

Firefly founder Tom Markusic noted that the engines on flight 1 were “rougher” than newer engines and therefore produced more vibrations during flight, leading to this failure mode. However, to be safe, teams moved the electrical conductor further up on the vehicle where vibrations are less intense, ensuring the failure mode will not repeat itself.

Alpha is a two-stage small-lift launch vehicle built and developed by Firefly Aerospace. With an eventual goal of being able to place 1,170 kg of payload into LEO, the vehicle stands at 29.48 meters tall. Alpha has a significantly higher mass-to-orbit than other small satellite launchers, such as Rocket Lab’s Electron or Astra’s Rocket 3, which have demonstrated placing up to 300 kg and 25 kg into LEO, respectively.

The first stage of Alpha is equipped with four Reaver 1 engines, which run on RP-1 kerosene and liquid oxygen (LOX). Notably, Reaver utilizes the tap-off engine cycle, meaning that instead of having a separate gas generator to spin the turbines, pressure from the main combustion chamber is used. However, as the exhaust gas used to spin the turbine is still exhausted, this is still considered an open-cycle engine.

Each Reaver engine produces a maximum thrust of 200 kN and achieves a specific impulse of 296 seconds in the vacuum of space. For rocket engines, the engine’s specific impulse is directly proportional to the velocity of the exhausting gas; for Reaver, the maximum average exhaust velocity is ~2,900 m/s.

Alpha’s first and second stages are both built from carbon-fiber composites that form ultra-light linerless propellant tanks. Similar to the Falcon 9, both stages have their RP-1 tanks on the bottom with the LOX tank on top, with a transfer tube to deliver LOX to the engines. 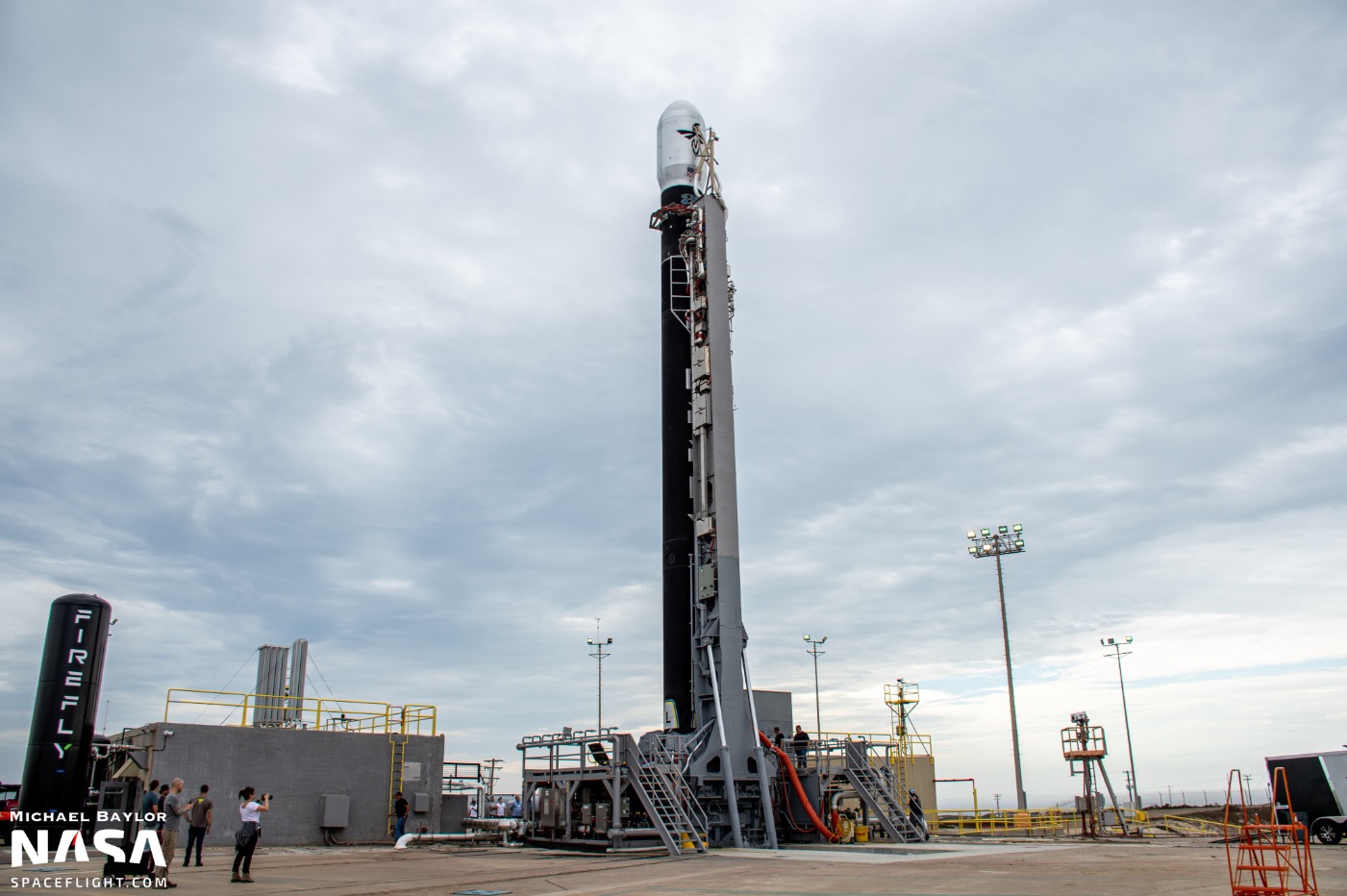 The second stage is equipped with a single Lightning 1 engine, which is also a tap-off engine cycle capable of producing 70 N of thrust.

On top of the second stage lies the carbon-composite payload fairing. For “To The Black,” there were a number of small payloads inside. Firstly, Teachers in Space will launch the Serenity 3U CubeSat, which will collect flight data during its mission and make it available to the educational community.

Also flying on FLTA002 was NASA’s TES-15 3U CubeSat, which has a deployable exo-brake that will be used to validate center of mass systems for future reentries. This payload is part of NASA’s Technology Educational Satellites program, which gives students the opportunity to work on satellites.

The final payload was Libre Space Foundation’s PicoBus, which will deploy six picosatellites. All of these satellites are technology demonstrators for communication, remote sensing, and more.

Firefly’s Alpha rocket is perched for another launch attempt early Friday morning. T-0 is 12:01am PDT on 9/30 with a 2-hour window.@NASASpaceflight pic.twitter.com/spjDxc9IzL

Eight hours before launch, teams began conducting final pad checkouts. During this time, the Alpha vehicle was powered up and performed sensor checks, which should were completed by T-6 hours. At this point, the vehicle began to be loaded with helium, which is used to pressurize and backfill the tanks as they empty during ascent.

At T-5 hours and 15 minutes, the vehicle was loaded with RP-1. 45 minutes later, the pad was cleared, giving way to the start of LOX load at T-3 hours and 40 minutes. Propellant loading lasted until 20 minutes before launch when the vehicle entered terminal count. At this point, the rocket was fully fueled (both with RP-1 and LOX), and was continually topped off with both propellants.

The four Reaver 1 engines on the first stage ignited at T-1.8 seconds utilizing TEA-TEB–a pyrophoric compound, meaning it combusts upon contact with oxygen. This combustion will be bright green and will signal the start of the engines. With all four engines nominal, the launch clamps released from the base of the vehicle, letting it lift off.

At T+1:13 the vehicle passed through maximum aerodynamic pressure. At T+2:37, the four first-stage engines shut down, in an event called main engine cutoff (MECO), before the stages separated and the second stage ignited its engine.

Less than a minute later, at T+3:25, the fairing was deployed. The second stage then burned for another four minutes, before shutting down at T+7:40. At this point the mission was not over, as the stage coasted until T+53:57 when the engine ignited for a second time, this time for two seconds. This raised the initial elliptical orbit into a circular 300 km orbit.

Alpha then deployed all three payloads, finishing its mission at T+1:01:57.

Firefly is hoping to launch FLTA003 in late 2022, which will likely be the ELaNa 43 mission for NASA.