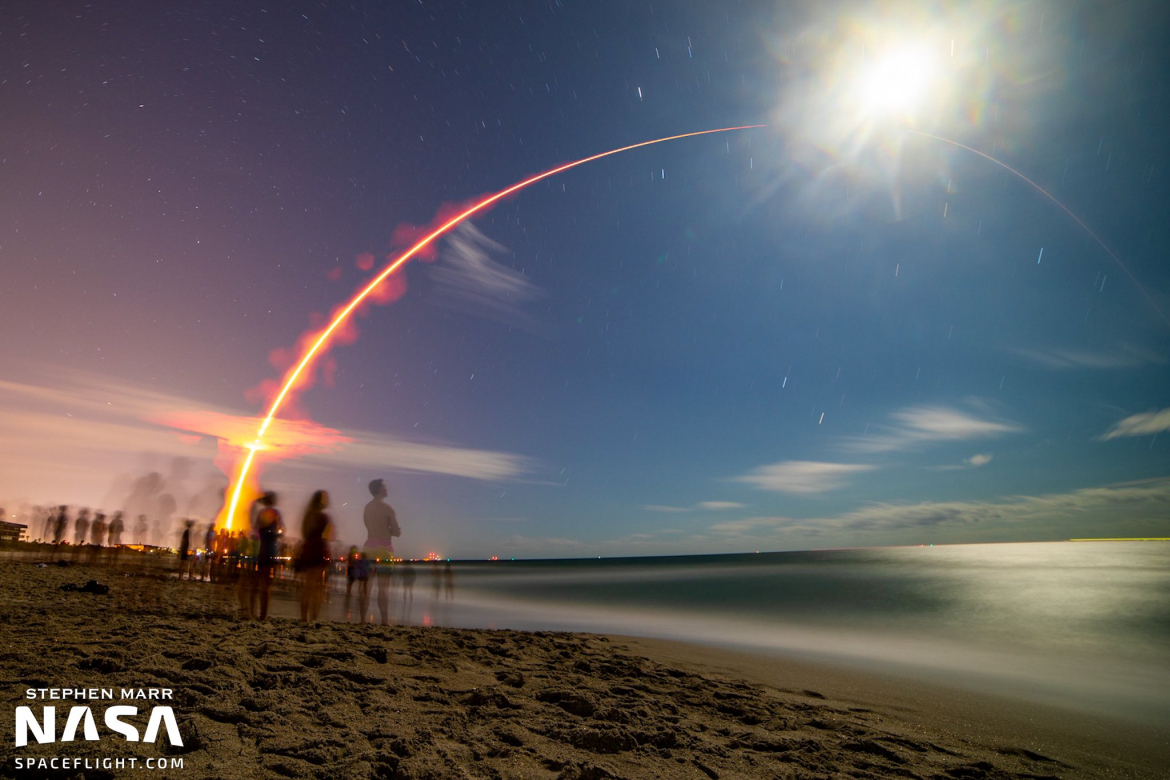 The Eutelsat Hotbird-13F geostationary communications satellite launched atop a SpaceX Falcon 9 out of Cape Canaveral, Florida. The Falcon 9 booster 1069-3, which had flown the CRS-24 and Starlink 4-23 missions, launched the Hotbird satellite to geostationary transfer orbit.

The launch occurred at the end of the window on Saturday, Oct. 15 at 1:22 AM EDT (05:22 UTC). The Falcon 9 launched due East into an initial parking orbit inclination of 28 degrees from Space Launch Complex 40 (SLC-40) on the grounds of the Cape Canaveral Space Force Station (CCSFS). This is standard for geosynchronous transfer orbit (GTO) launches.

The Falcon 9, climbing through the night sky, reached maximum dynamic pressure (Max Q) at the T+1:12 mark. Around T+2:32, the first stage’s main engines cut off and the second stage plus the Hotbird payload separated. Shortly thereafter, the fairing halves separated as the stage continued to orbit.

While the fairing halves targeted for a splashdown and retrieval some 781 kilometers east of Cape Canaveral, B1069 completed its third flight with a landing on the drone ship Just Read The Instructions, stationed approximately 663 km downrange of the Cape.

The Merlin Vacuum-powered second stage relit its engine while over the equatorial regions of Africa for 58 seconds to place the Eutelsat Hotbird payload into its proper geostationary transfer orbit. The satellite was released to place itself into its final orbit using its fuel reserves and engines.

Eutelsat Hotbird-13F and its sister satellite Hotbird-13G are slated to replace three existing satellites at the 13 degrees East longitude geosynchronous orbital slot. These satellites are designed to provide up to 1,000 television channels, including 4K video, to over 160 million homes in Europe, North Africa, and the Middle East.

Both new Hotbird satellites are built by Airbus Defence and Space. Hotbird 13F was the first satellite built under the European Space Agency’s Eurostar Neo program. This program was enabled by an ESA Partnership Project with Airbus, which is an effort by ESA to improve European space industry innovation and competitiveness in the world market.

Airbus has sold seven other Eurostar Neo satellites alongside Hotbird-13F. The ESA partnership with Airbus is part of a larger program known as Neosat. This program has seen ESA partner with Thales Alenia Space for their Spacebus Neo satellites, and 16 satellites from both companies in total resulting from the Neosat program have been ordered.

Eutelsat’s new Hotbird satellites were intended to be launched using the Arianespace Ariane 6 launch vehicle, but delays for that rocket caused the satellite operator to turn to SpaceX. Hotbird-13G is currently scheduled for launch on a Falcon 9 from Florida no earlier than this November. 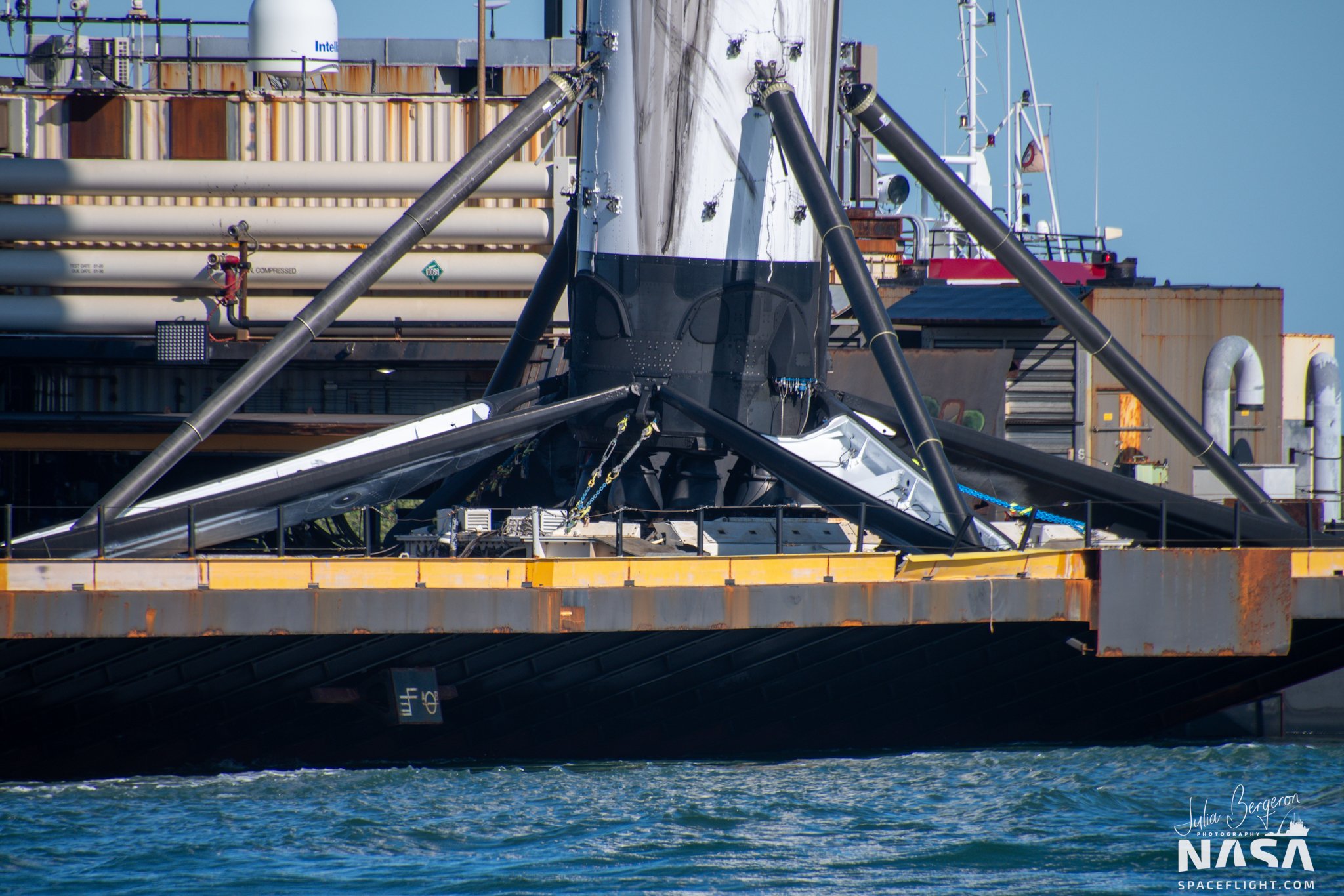 Booster 1069 coming into port with damage after its first flight. (Credit: Julia Bergeron for NSF)

The Hotbird-13F launch was SpaceX’s 47th Falcon 9 flight this year. The high flight cadence is made possible by the reuse of Falcon 9’s first stage. After B1069 landed on the drone ship Just Read the Instructions on Dec. 21, 2021, issues securing the booster with the Octagrabber caused damage to the Merlin engine nozzles and landing legs.

B1069 arrived in port with a decided lean to one side and needed repairs which caused a lengthy turnaround between the CRS-24 flight and its second launch in August 2022. However, the repairs enabled SpaceX to keep the booster in its fleet. This helps to maintain this year’s record flight cadence as payloads will not need to wait for a new booster.

Prior to the Hotbird-13F launch, SpaceX flew the Falcon 9 180 times, with 140 successful landings and 119 total reflights. The company is planning to launch around 60 flights in 2022, and B1069’s continued service in the booster fleet is made more important by the fact that multiple Falcon 9 and Falcon Heavy first stages will be expended during upcoming missions.