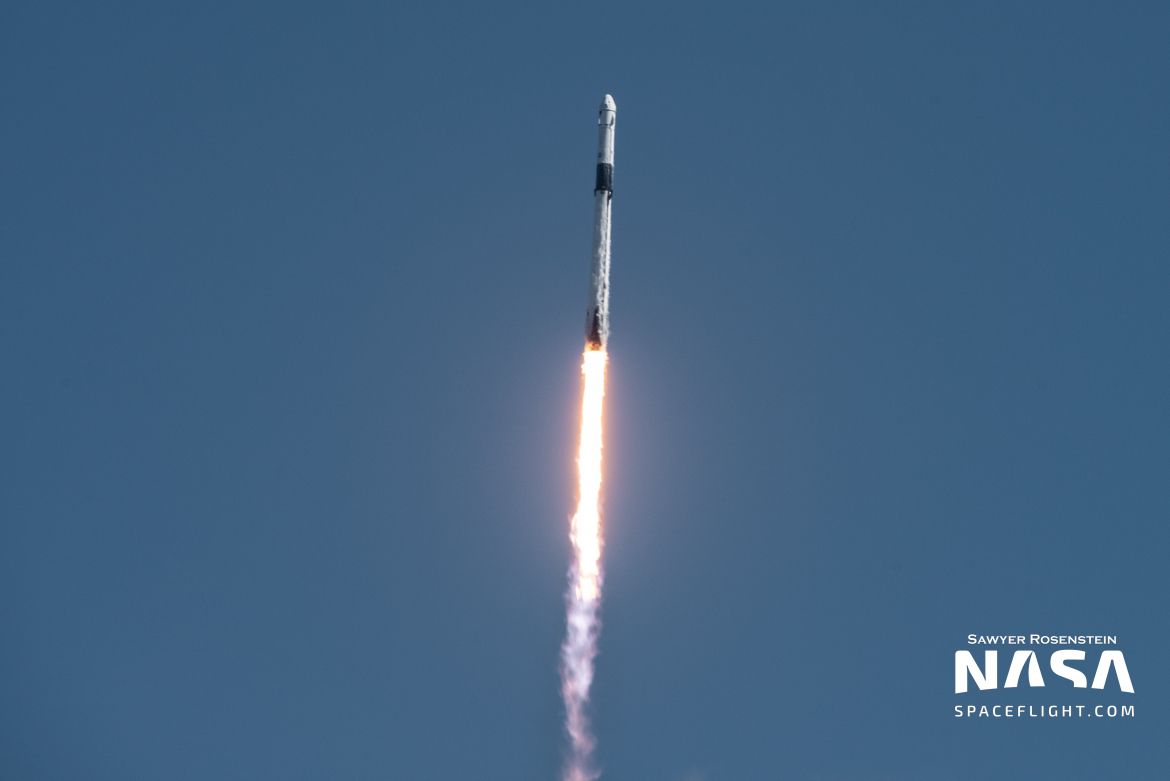 SpaceX and NASA have launched a group of four astronauts to the International Space Station (ISS) as part of the Crew-5 mission. The crew flew atop a Falcon 9 rocket and the Crew Dragon Endurance spacecraft from Kennedy Space Center’s historic Launch Complex 39A on Wednesday, Oct. 5 at 12:00:57 PM EDT (16:00:57 UTC).

With docking completed 29 hours later, the crew will spend approximately six months at the station, taking the places of the Crew-4 astronauts, who are set to make their return to Earth aboard Crew Dragon Freedom on Wednesday, Oct. 12.

The crew complement for the latest Commercial Crew mission consists of four astronauts: two from NASA, one from the Japanese Aerospace Exploration Agency (JAXA), and one from the Russian space agency, Roscosmos. Three of the four crew members are first-time fliers, having had no previous spaceflight experience.

Crew-5 is commanded by astronaut Nicole Aunapu Mann, 45, of Petaluma, California. Mann was a US Navy test pilot before joining NASA as part of the Group 21 astronaut class in 2013. She is also a member of the “Artemis Team” — a batch of astronauts eligible for selection for future crewed lunar flights.

A graduate of the US Naval Academy, Mann is also a holder of a Master’s degree in mechanical engineering at Stanford University. As a Navy pilot, she accrued over 2,500 hours of flight time in 25 types of aircraft, having served in military operations such as Iraqi Freedom and Enduring Freedom.

Mann completed astronaut training in 2015 and was assigned to fly aboard Boeing’s Starliner spacecraft as part of its Crew Flight Test mission (CFT). However, Mann was reassigned to Crew-5 in October 2021 due to delays in Starliner’s development. Crew-5 is Mann’s first spaceflight.

In addition to becoming the first woman to command Crew Dragon, Mann also became the first Native American woman to fly to space.

Fellow NASA astronaut Josh Cassada, 49, occupied the pilot’s seat for the Crew-5 mission. Cassada is another first-time flier, having been reassigned from a Starliner crewed flight to Crew Dragon, much like Nicole Mann.

Cassada is a native of White Bear Lake, Minnesota, and is a graduate of Albion College and Rochester University with various degrees in physics. He is also a former US Navy test pilot, having acquired over 4,000 flight hours in total. 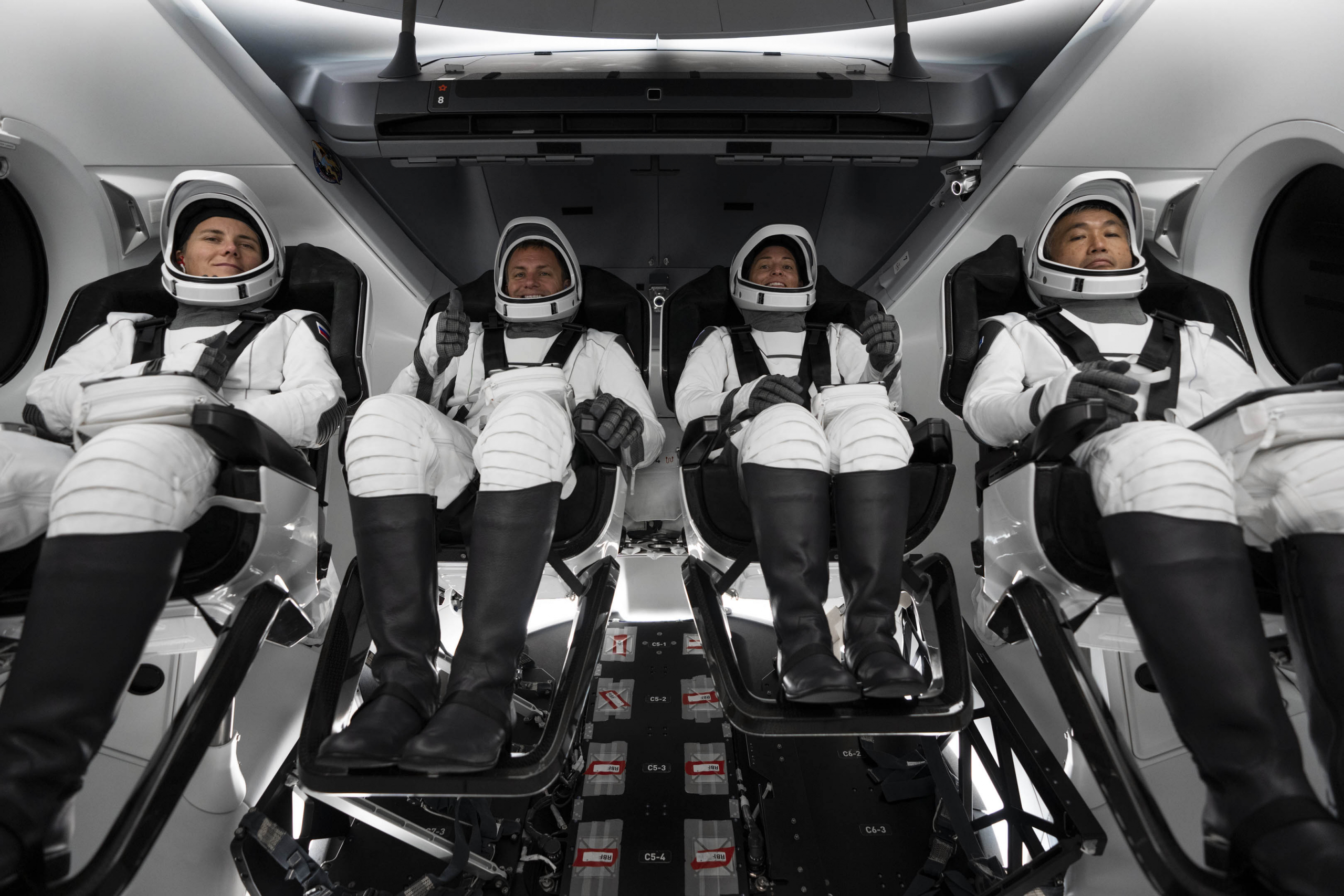 JAXA astronaut Koichi Wakata, 59, is one of two mission specialists for Crew-5 and is the most experienced member of the crew. Wakata is a spaceflight veteran, having flown on four Space Shuttle missions (STS-72, STS-92, STS-119, and STS-127) and a single Soyuz mission (Soyuz TMA-11). With his launch on Crew-5, Wakata will join only a handful of astronauts who have flown on three different spacecraft.

Previously a structural engineer for Japan Airlines, Wakata is a graduate of Kyushu University with degrees in aeronautical engineering, aerospace engineering, and applied mechanics. He was selected to join the JAXA astronaut corps in 1992, receiving spaceflight training at NASA’s Johnson Space Center.

Roscosmos cosmonaut Anna Kikina, 38, of Novosibirsk, Russia, is the youngest Crew-5 astronaut and the second mission specialist. Kikina is flying as part of a seat swap agreement between NASA and Roscosmos, in which Russian astronauts will fly on US crew vehicles in exchange for NASA seats on Soyuz spacecraft.

Kikina was selected to join the Russian space program in 2012 and is currently the only female cosmonaut in active service. She is the first Russian to fly on Crew Dragon and the first cosmonaut to fly on an American launch vehicle since STS-113 in November/December 2002. Crew-5 is her first spaceflight. 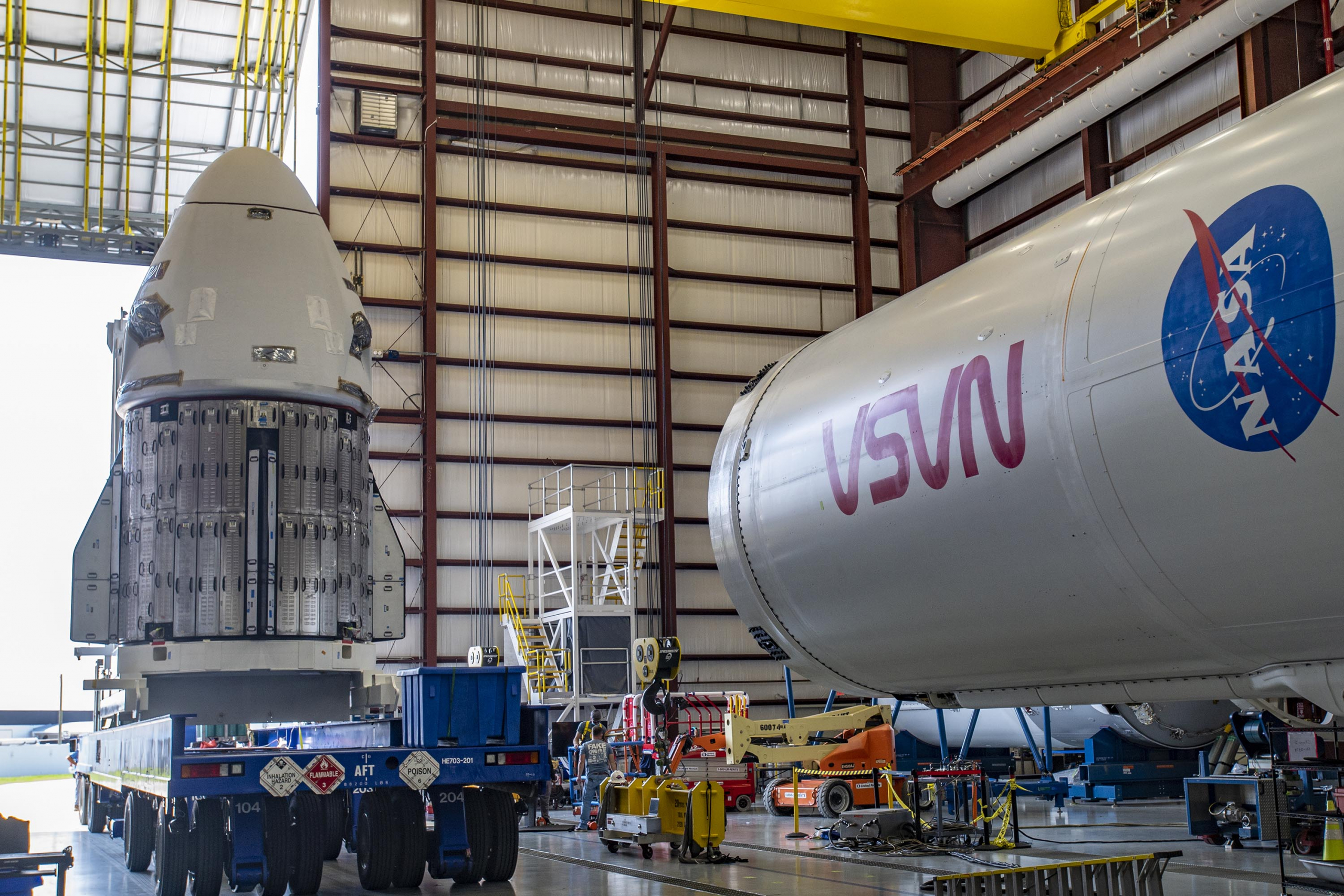 Crew Dragon Endurance and its Falcon 9 rocket inside the Horizontal Integration Facility at LC-39A. (Credit: SpaceX)

Crew-5 also marks the second flight for the Crew Dragon Endurance spacecraft, having flown on the Crew-3 mission that launched in November 2021 and ended with a splashdown in the Gulf of Mexico in May 2022. Endurance, officially designated as C210, is one of four vehicles in the Crew Dragon fleet, along with Endeavour (C206), Resilience (C207), and Freedom (C212).

Endurance was launched on Falcon 9 booster B1077-1, which is the newest Falcon booster to join the ranks. After launch, the first stage landed on the drone ship Just Read the Instructions, which was stationed downrange in the Atlantic Ocean.

During transit from SpaceX’s headquarters in Hawthorne, California, to their dedicated testing facility in McGregor, Texas, B1077 sustained some damage when it collided with an overhead bridge. SpaceX has since replaced the composite interstage along with several other components and has conducted test firings of the booster at McGregor to qualify it for flight.

During the launch, the two stages of Falcon 9 separated approximately two and a half minutes after liftoff, with the second stage carrying Crew Dragon Endurance and the Crew-5 astronauts to orbit. After spacecraft separation, the second stage deorbited itself to eliminate the possibility of creating orbital debris.

Endurance and crew arrive at the International Space Station about 29 hours after T0, docking to the Harmony module’s forward port, which occurred at 5:10 PM EDT (21:10 UTC) on Thursday, Oct. 6.

Crew-5 was originally scheduled to launch in early September but was postponed to Sep. 29 after Falcon booster B1077 was damaged during transport. The launch date was subsequently pushed back again to Oct. 3 to allow for breathing room between ISS visiting vehicles and then delayed for another two days due to the arrival of Hurricane Ian.

When Endurance reached space, a total 14 humans were living and working in low Earth orbit. This includes the four Crew-5 astronauts, seven astronauts who are already at the ISS via the Crew-4 and Soyuz MS-22 missions, and three taikonauts taking residence in the Tiangong Space Station. A week-long direct handover from Crew-4 to Crew-5 will take place before astronauts Kjell Lindgren, Jessica Watkins, Robert Hines, and current ISS commander Samantha Cristoforetti undock and make their return to Earth aboard Crew Dragon Freedom.

Crew-5 was the 44th launch of a SpaceX Falcon 9 rocket this year, as well as the sixth crewed orbital flight in 2022. This is also the third human spaceflight mission to be launched from Kennedy Space Center this year, after Ax-1 and Crew-4, matching a feat that was achieved in 2021, with the launches of Crew-2, Inspiration4, and Crew-3, respectively.

NASA has selected Dragon for 5 additional @Commercial_Crew missions to and from the @Space_Station, which brings the total number of astronaut Dragon flights for NASA up to 14! https://t.co/IjHdp5io4R pic.twitter.com/XwjuxRt16s

Wednesday’s launch came just weeks after NASA’s announcement that SpaceX had been awarded additional five additional flights for the Commercial Crew program, on top of three missions awarded earlier in the year. This means that SpaceX can support Crew Dragon flights to the ISS through Crew-14.

Between Dragon and Starliner — which is set to embark on its crewed test flight in 2023 — these extra flights will provide uninterrupted crew transport services for NASA astronauts until the ISS reaches its currently planned end of life in 2030.