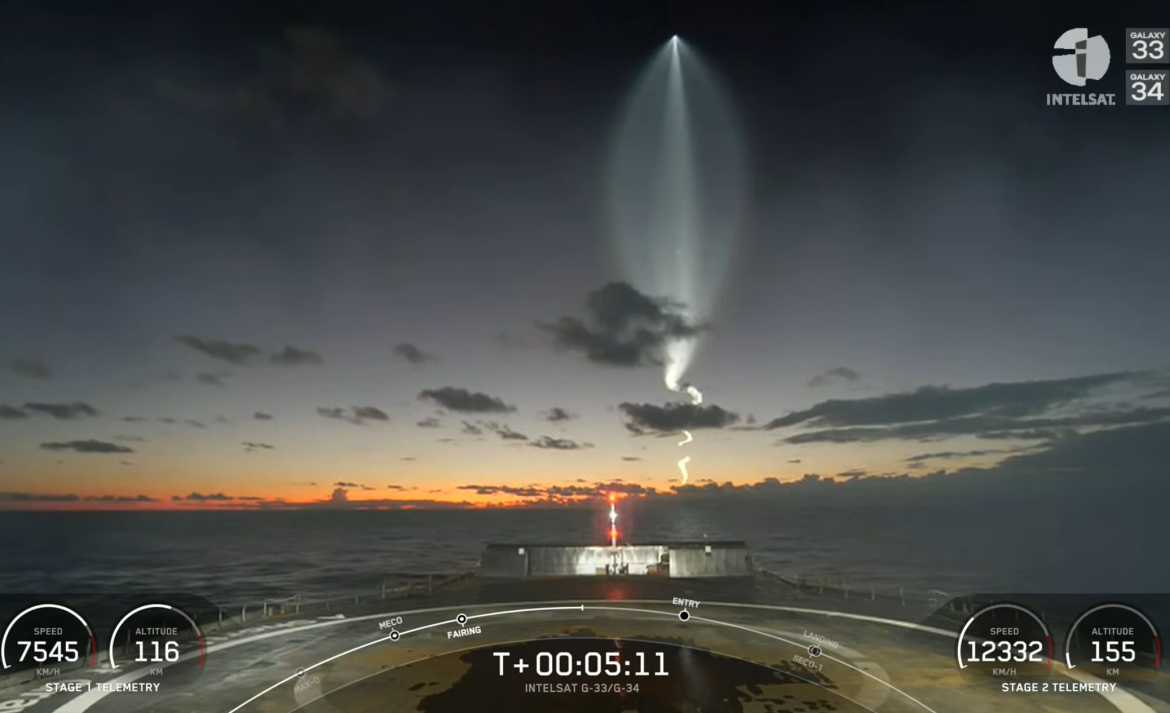 This mission adds to SpaceX’s already record-setting year, marking their 46th flight of 2022. SpaceX can maintain such a high launch cadence by using flight-proven first-stage boosters and payload fairings.

The two satellites launched on top of booster B1060, which ties the record for the most-flown booster in SpaceX’s fleet, numbering 14. This was also the first time a commercial payload flew on a booster with that many flights under its belt. The booster previously supported GPS-III-SV03, Türksat-5A, Transporter-2, as well as 10 different Starlink missions.

SpaceX had one previous launch for Intelsat, with the Intelsat 35e satellite reaching orbit in 2017. This was the first time Intelsat flew one of its Galaxy video transmission satellites aboard a Falcon 9 rocket. Previous Galaxy satellites were launched aboard Soyuz-FG and Proton rockets from Kazakhstan and Russia, as well as Ariane 4 and 5 rockets from French Guiana.

The G-33 and G-34 satellites were both built by Northrop Grumman after being selected by Intelsat in 2020. Both satellites will operate in the upper portion of the C-band spectrum, which is a range of wireless radio frequencies used for telecommunications and data connections around the world.

These satellites are supporting the Federal Communications Commission (FCC) and their plan to keep the lower portion of the C-band spectrum available to cell service providers for the continued rollout of 5G services across the United States. By moving traditional C-band communications to these upper portions of the spectrum, the FCC is clearing the 3.7 – 4.2 GHz bands which can be auctioned off to wireless providers. That spectrum must be clear of all other traffic by Dec. 5, 2023. 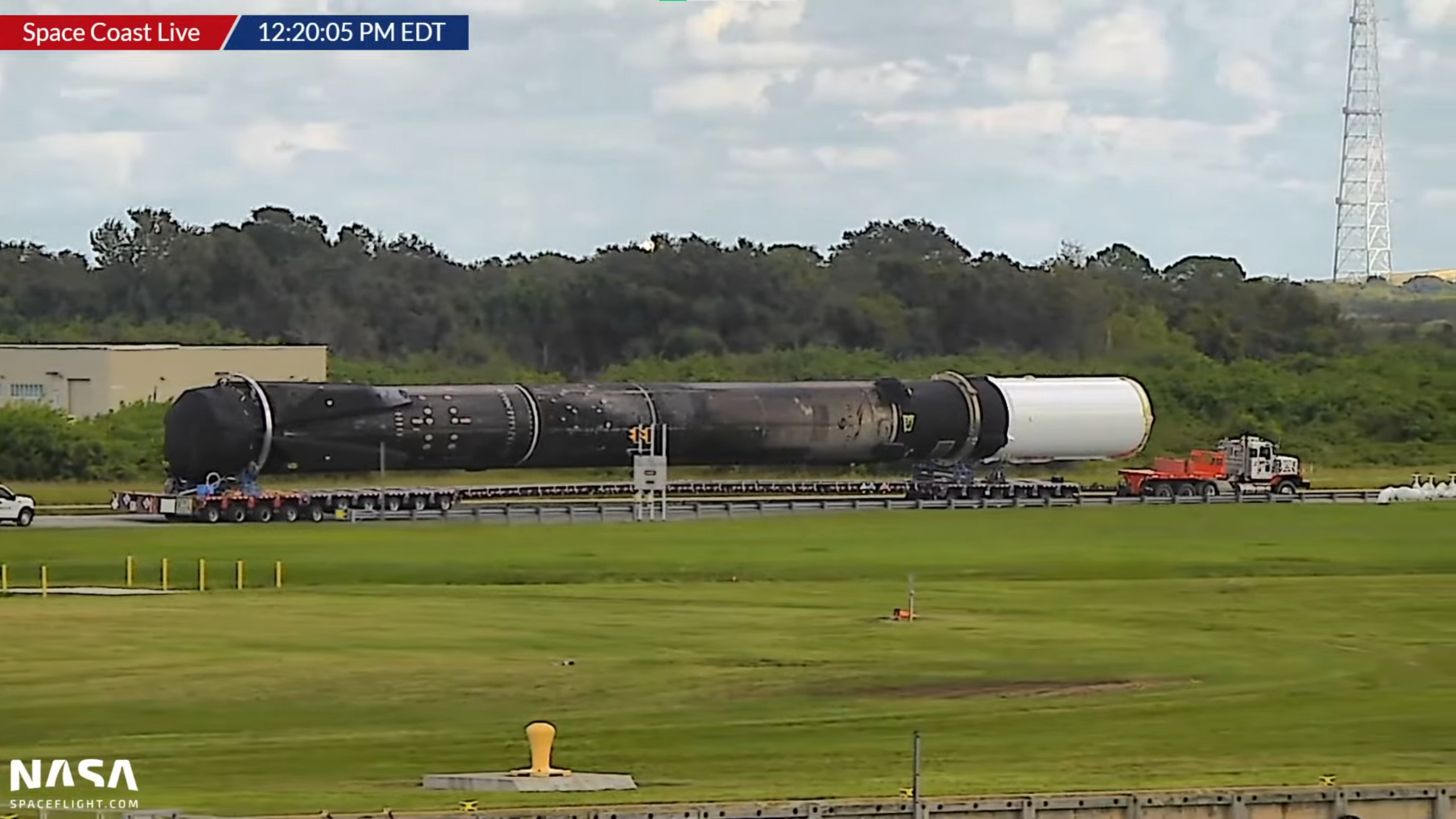 Booster B1060-14 being transported across Kennedy Space Center to the launch site on Oct. 3. (Credit: NSF Space Coast Live)

G-33 will replace the troubled Galaxy 15 (G-15) satellite. Launched on Oct. 13, 2005, from French Guiana aboard an Ariane 5 rocket, the satellite was placed into a geosynchronous orbit. On April 5, 2010, Intelsat officials said the satellite would not respond to commands sent to it by ground controllers.

Control was once again gained on Dec. 23, 2010, after Intelsat said it allowed the batteries to completely discharge followed by an emergency command patch.

According to FCC filings in Aug. 2022, Intelsat requested permission for the satellite to exceed its station-keeping limits, which typically indicates a loss of control. Two weeks afterward, the spacecraft reportedly muted its transponders. All communications that went through G-15 were routed to other satellites until G-33 can reach its designated geostationary orbit.

Both the G-33 and G-34 satellites were encapsulated in Falcon 9’s 5.2-meter diameter payload fairing, before being attached to the Falcon 9 inside the Horizontal Integration Facility (HIF) at SLC-40. During the usual flow, the rocket is placed on the Transporter Erector (T/E). The full stack on the T/E is then rolled out to the launch pad and raised to its launch position.

To support the mission, SpaceX sent its drone ship A Shortfall of Gravitas (ASOG) 643 km downrange to attempt to recover the first stage booster.

Falcon 9 followed an eastward trajectory for this mission, like all other GTO flights. Geostationary orbits have a zero-degree inclination relative to the equator, so SpaceX wants to send Falcon 9 directly east so as not to create any additional orbital inclination than the natural 28.6 degrees achieved by going due east from the Cape during the initial ascent to orbit.

The final stages of the countdown began at T-38 minutes when the launch director (LD) gave a go/no-go poll to begin loading the rocket with RP-1, a type of refined kerosene, and liquid oxygen (LOX).

Seven minutes before launch, the nine Merlin-1D engines on the first stage began to chill down using LOX. Chilling the engines ensures there are no thermal shocks at ignition. The T/E retracts to its pre-launch position of 88.2 degrees at T-4 minutes and 30 seconds.

With a minute left in the count, two major events take place. First, the flight computers enter their startup sequence, taking over the countdown. Second, Falcon 9’s tanks begin to pressurize to flight levels. The LD gives the final “go” for launch at T-45 seconds.

At T-3 seconds, the nine first-stage engines are commanded to ignite. A second later, the engines ignite and then begin a final health check. Once the engines are verified to be healthy and producing full thrust, the hydraulic hold-down clamps and the T/E retract, and Falcon 9 lifts off.

A few seconds after liftoff, Falcon began a pitch maneuver to put itself on the planned launch track. A little over one minute into the flight, Falcon 9 passed through Max-Q, the point of maximum dynamic pressure, which is the point where the aerodynamic stresses on the rocket are at their peak.

After burning for about two and a half minutes, the nine first-stage engines shut down in an event designated Main Engine Cutoff (MECO). A few seconds later, the two stages separated, and the second stage ignited its single Merlin Vacuum (MVac) engine. 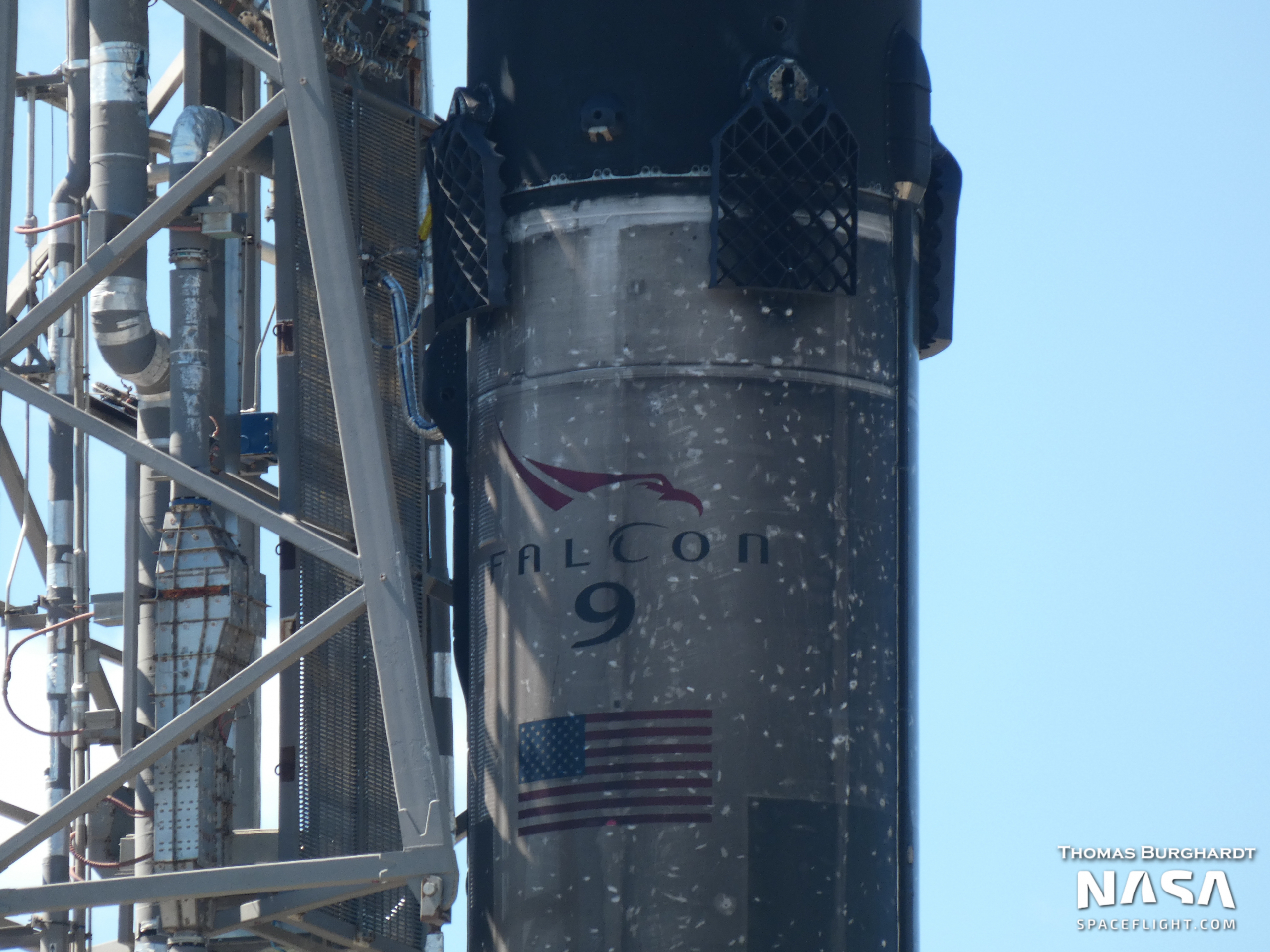 A closeup of the top of B1060 before making its 14th flight, launching Galaxy-33 and 34. (Credit: Thomas Burghardt for NSF)

Just under a minute into the second stage’s burn, the payload fairing separated, exposing G-33 and G-34 to space for the first time. The two payload fairing halves are designed to be reusable, descending under parachutes and splashing down into the ocean to be recovered.

Stage two continued to burn for about five and a half minutes until it reaches a low parking orbit. While the second stage is performing this burn to reach orbit, the first stage continues to follow its ballistic trajectory towards ASOG.

Wow! What a view of the jellyfish from the drone ship! pic.twitter.com/ioo9AG2Hq5

Its four titanium grid fins deployed moments after stage separation, while the stage coasted for a few minutes before three of its nine engines reignited for the entry burn. This roughly 15-20 second firing helps to protect the stage from the aerodynamic forces from reentry, also serving to slow it as it passes back into Earth’s atmosphere.

From there, the first stage continues to slow down as it descends unpowered, passing back through the transonic regime. With the stage at an altitude of two kilometers and a speed of roughly 235 m/s, a single engine ignites for its landing burn. This 20-30 second burn slows the stage down for a gentle landing aboard ASOG.

This marked the 145th overall landing for a Falcon 9 first stage. The drone ship will take the booster back to Port Canaveral to be prepared for a future flight.

Once in orbit, the second stage coasted until 26 minutes and 19 seconds after liftoff, when it reignited the MVac engine for a burn of 47 seconds to raise the apogee of its orbit before deployment of the payloads. G-33 deployed first approximately 33 minutes into the mission, followed by G-34 five minutes later.

SpaceX is also contracted to launch the upcoming Galaxy 31 and Galaxy 32 satellites for Intelsat. Those satellites, built by Maxar Technologies, are scheduled to launch no earlier than Nov. 5, 2022.