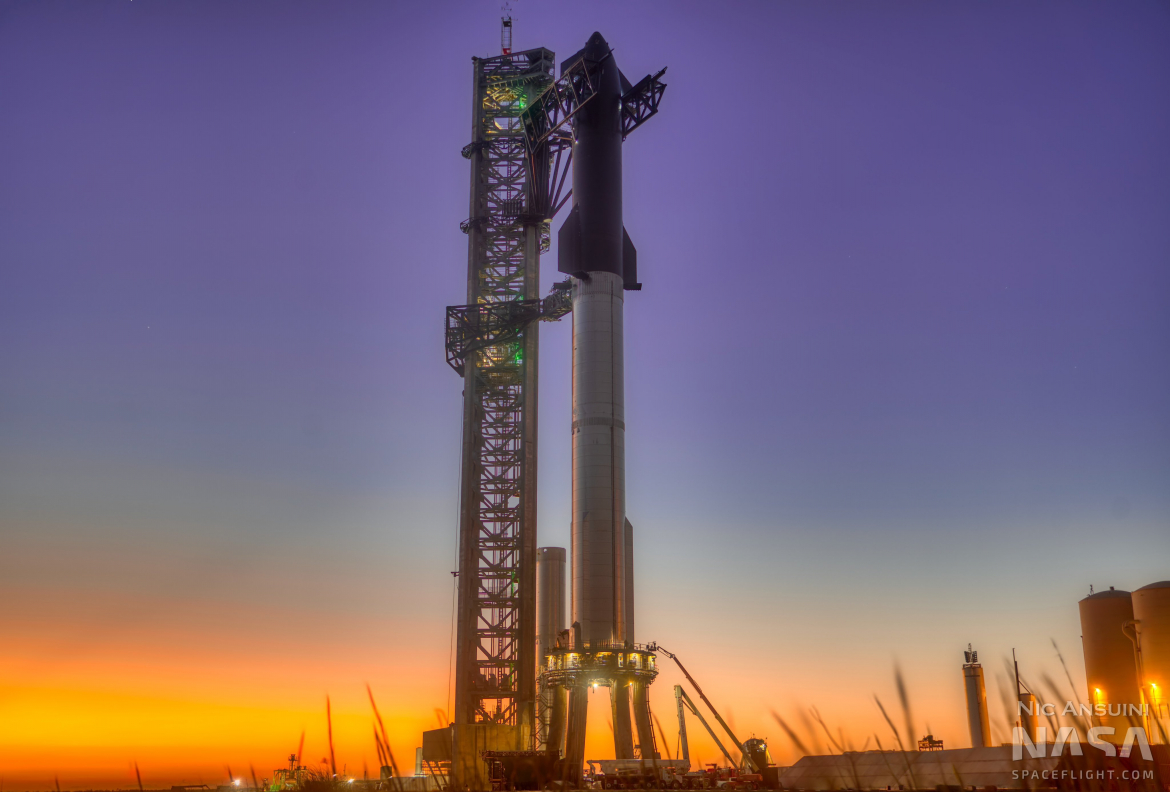 A fully stacked Starship is still set to conduct the next round of tests for its fully reusable launch system ahead of its debut orbital launch attempt as soon as later this year. This is despite a surprise destack of Ship 24 on Sunday, although this does not preclude restacking ahead of the next phase of testing during the coming week.

The new test campaign begins as Starship itself gains another announced crew flight to the Moon, this time for 10 paying passengers on a lunar free return trajectory excursion.

The new round of launch readiness testing kicked off in earnest with the stacking of Booster 7 onto the Orbital Launch Mount (OLM) on Monday, Oct. 10.

This was followed on Oct. 12 by stacking Ship 24 on top of the Super Heavy booster ahead of what was anticipated to be a battery of fuelling tests to prepare for a static fire test series of the Booster’s 33 Raptor 2 engines.

However, stacking operations did not go entirely to plan, with observers noting a shift in the Booster as Ship 24 was placed atop it.

The fact that there was an issue was confirmed the following day, Oct. 13, when SpaceX workers performed a partial destack of the rocket and sent workers up the tower, across the quick disconnect arm, and up in lifts to perform visual inspections before lowering Ship 24 back down onto the Booster.

Interestingly, the first two full stacks for Starship in February and March 2022 did not result in the same observed shift of that Booster as a Ship was placed on top of it.

The fact that this was seen for the first time on the third stacking could point to iterative design changes on the Booster, Ship, and OLM after the prior stacking in March. 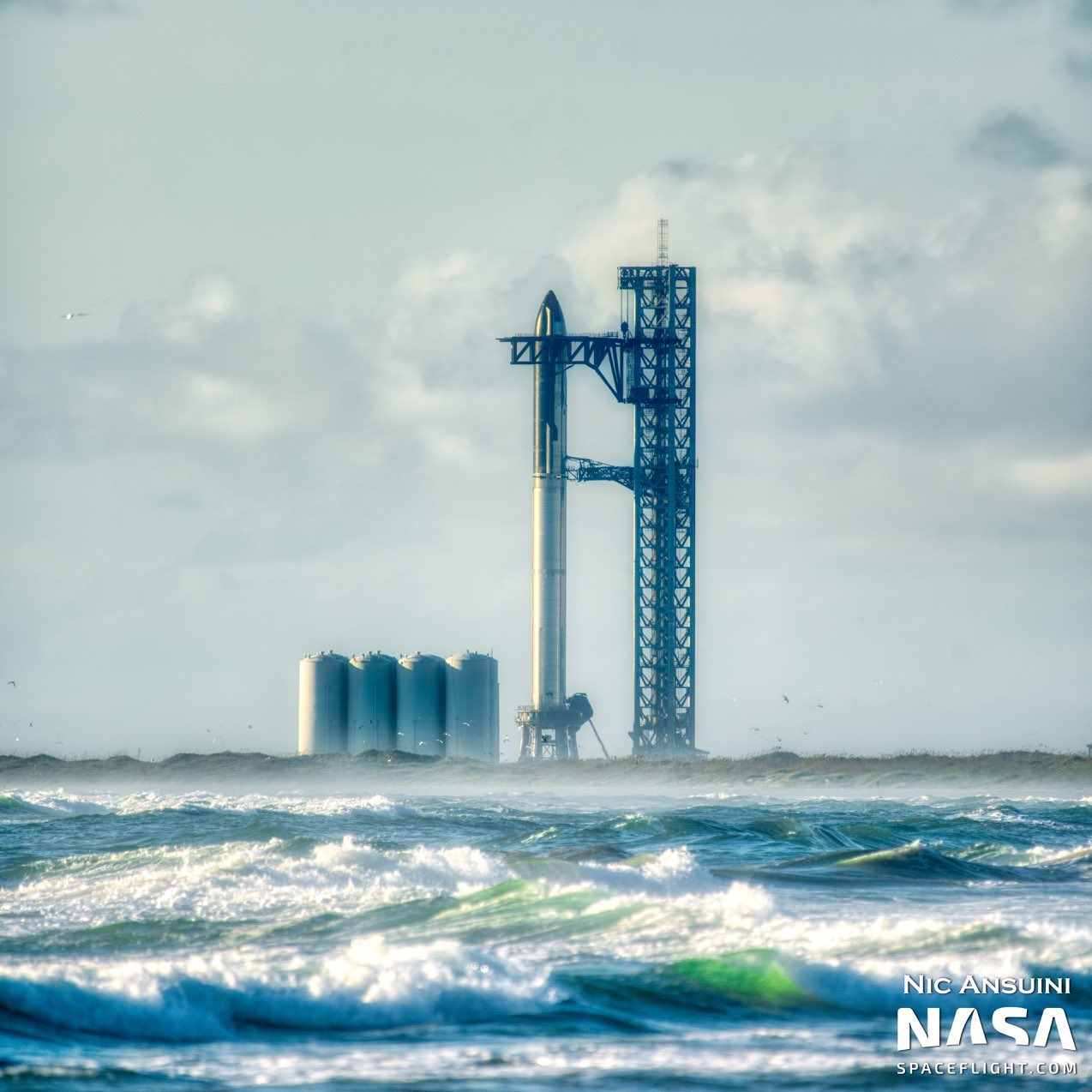 A ship with the waves. Full stack Starship on the pad at Starbase in October 2022. (Credit: Nic Ansuini for NSF)

Those changes could be exacerbating factors to the issue observed Monday.

Indeed, sources noted that additional work was now required on the Ground Support Equipment (GSE) and pad through the weekend and into the start of the new week.

Nevertheless, the issue did not initially appear to be overtly severe given that SpaceX did not immediately destack the vehicles Wednesday night and that they immediately re-stacked them Thursday after visual inspections.

Moreover, the vehicle had remained stacked through the weekend, until Sunday at least when Ship 24 was separated from Booster 7. No specific reason has yet been provided for this operation.

We are proceeding very carefully. If there is a RUD on the pad, Starship progress will be set back by ~6 months.

Issues in general are expected during initial test campaigns, especially ones attempting to place the most powerful rocket ever created into orbit under its own brand-new propulsion systems.

SpaceX is not the only large aerospace organization facing issues and delays getting a brand new Super Heavy Lift rocket off the ground.

Both NASA and Blue Origin are likewise working issues – some more significant than others – with SLS and New Glenn, respectively.

To this, Starship and its complexity are no different.

Timelapse of Ship 24 being stacked onto Booster 7 for the first time.https://t.co/9tCZafcbaB pic.twitter.com/MzpuV5d26h

Despite Sunday’s destack, sources note that the current plan for the week of Oct. 17 is to complete pad and GSE work and then aim for full cryogenic Wet Dress Rehearsal. A sign this is still the plan will be visually confirmed via a restack of Ship 24.

This will include a countdown that stops short of igniting engines on Booster 7 by mid- to late-week.

Moreover, the fueling test will be also be a critical moment for the quick disconnect arm that has never been used to cryogenically fuel a Ship to date.

Verifying its complete operational status is key to continuing with the remaining test sequence.

Additionally, SpaceX could seek to repeat the fuelling test to gain as much data as possible before proceeding into a multi-step static fire campaign.

Per the currently understood plan, SpaceX will first attempt to static fire a subset of the engines on Booster 7 before proceeding incrementally up from there to ultimately firing all 33 engines at the same time.

If the full stack cryogenic test goes well this coming week, a static fire could follow as soon as a few days thereafter.

The ultimate plan of firing all 33 engines will help verify computational fluid dynamics calculations of what the exhaust environment will be like, what it will do, and where it will go.

The tests will also validate the modeling of the acoustic environment all 33 Raptor 2 engines will unleash and how well the sound suppression system, now installed at the OLM, will be in deadening enough of the sound to allow for safe operations of the system.

This is to say there is still a long road ahead for Starship before it can make its opening launch attempt.

Most recent comments by Elon Musk indicate a late-November target by the founder and chief engineer for SpaceX.

However, given the natural stretch to test schedules and the need to stop and address issues that are discovered, a more realistic launch period is likely in the December 2022 to February 2023 timeframe at present.

Starship gets another mission

Exactly when this fight will take place is an open question as it is dependent on its Dear Moon predecessor and the Starship program’s larger commitments to NASA’s Artemis program — both of which will follow numerous planned Starlink and fuel depot test flights to prove out the overall system.

The first two passengers for this second lunar flyby mission are Dennis and Akiko Tito.

Dennis Tito was the first private astronaut/space tourist when he paid for a seat on the Russian Soyuz for a week-long flight to the International Space Station in 2001.

He worked for NASA at the Jet Propulsion Laboratory in the 1960s in part as a trajectory design engineer on the Mariner 4 mission, the first to return close-up images of Mars.

Dennis Tito is 82 years old and would stand to be the oldest person to launch into Earth orbit, should the mission and his participation in it take place.

Regarding his age, Tito stated to NASASpaceflight in a one-on-one interview after the announcement that “There was that question 21 years ago. NASA was very concerned about my age, and I was put through a lot of medical tests. Then it came to now, this mission, and it’s an even bigger issue because I’m 82 years old now.”

To this end, the Titos will be heavily monitored on the flight from a medical perspective.

“[We are going to be] very carefully monitored, especially myself, given my age. “[And the monitoring] should contribute a lot to medical knowledge. And we will need that once we’re ready to send Starship to Mars with as many as 100 people for a nine-month flight, you need to really understand the physiology, particularly a whole wide range of ages.”

Joining him on the flight as the sofar only other announced passenger is Akiko Tito, a system engineer, and jet-rated commercial pilot.

Although NASA has been clear that a woman will be part of the Artemis III landing team, Akiko is the first named woman to be announced to travel to the Moon, though she will not be the first to ultimately do so.

The Titos will be joined by up to eight other passengers on the flight, but unlike the Dear Moon mission proceeding it, the Titos do not pick the remaining participants.

Instead, the places are vetted and sold airline-style by SpaceX to those who can afford to and wish to make the week-long lunar trip.

The Titos noted that the launch location for the mission is not yet known, but that either Starbase or the under-construction facilities at the Kennedy Space Center are options.

This reference to either location serving as the potential launch site plays into the longer-term strategy SpaceX has for the initial years of flight for the Starship system — with dual operations from Starbase and KSC after initial flights from south Texas.

In Florida, teams continue to work on outfitting and systems installation on the Orbital Launch Mount inside Hanger M at the Cape Canaveral Space Force Station.

Once work there is complete, the OLM will be moved to LC-39A and installed on the launch table.

Meanwhile, at Roberts Road, SpaceX is constructing additional segments for a future Starship tower that is likely destined for installation on the Cape side of the Florida spaceport.

Firefly looking ahead after “To The Black” payloads reenter early