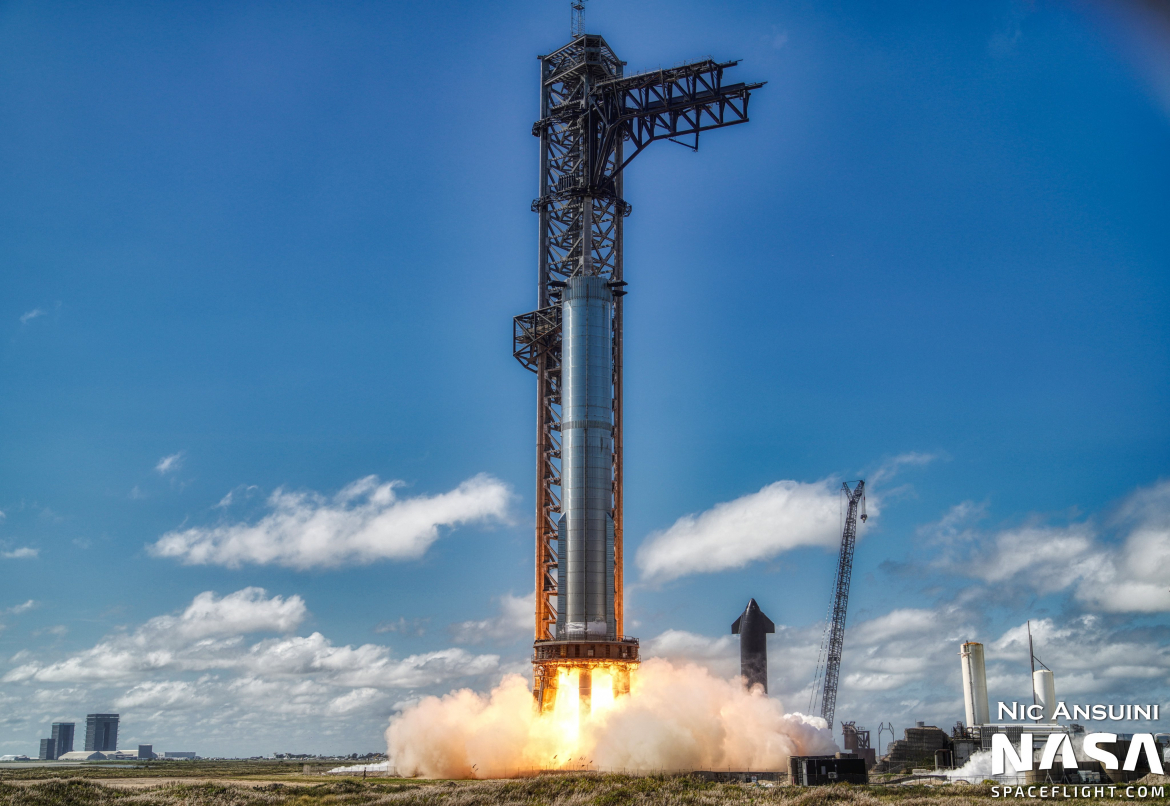 Booster 7 resumed its static fire test campaign Monday with a full-duration firing of 14 Raptor engines in a significant event before the long-awaited 33-engine static fire test. This milestone puts the Super Heavy booster one step closer to being ready for Starship’s first orbital flight.

While this flight is currently targeting no earlier than December 2022, the remaining work on both the booster and the ship, as well as the ground systems and infrastructure at the launch site, will likely push the debut of Starship into next year although. However, vehicle production is accelerating, allowing the company to have a quick cadence of flights once the first flight is completed.

Over two weeks, SpaceX teams tested the Ship 24 and Booster 7 full stack. This test campaign involved a partial load of either liquid oxygen (LOX) or liquid methane (LCH4) – one at a time and either on just one vehicle or both at once.

These tests were meant to provide further data on the process of fueling the massive rocket.

This testing regime has been paused for a while as teams now prepare Booster 7 for the final leg of its static fire test campaign.

Nov. 10 saw Booster 7 undergo a multi-engine spin prime test ahead of what was expected to be an attempt at a 16-engine static fire test later that day. However, the test was scrubbed shortly after the spin prime test.

With a notice sent to residents of the static fire test for Monday, it was expected that this will be another try at firing half of the engines on Booster 7.

The countdown proceeded to plan with the regular warning of a police siren for the T-10 minute mark.

Although there was a short hold, the suppression system was activated before the record amount of Raptor engines fired up at the same time.

In preparation for the resumption of this static fire test campaign, SpaceX teams have been installing shielding on the orbital launch mount (OLM) legs and also tested the fire suppression system. 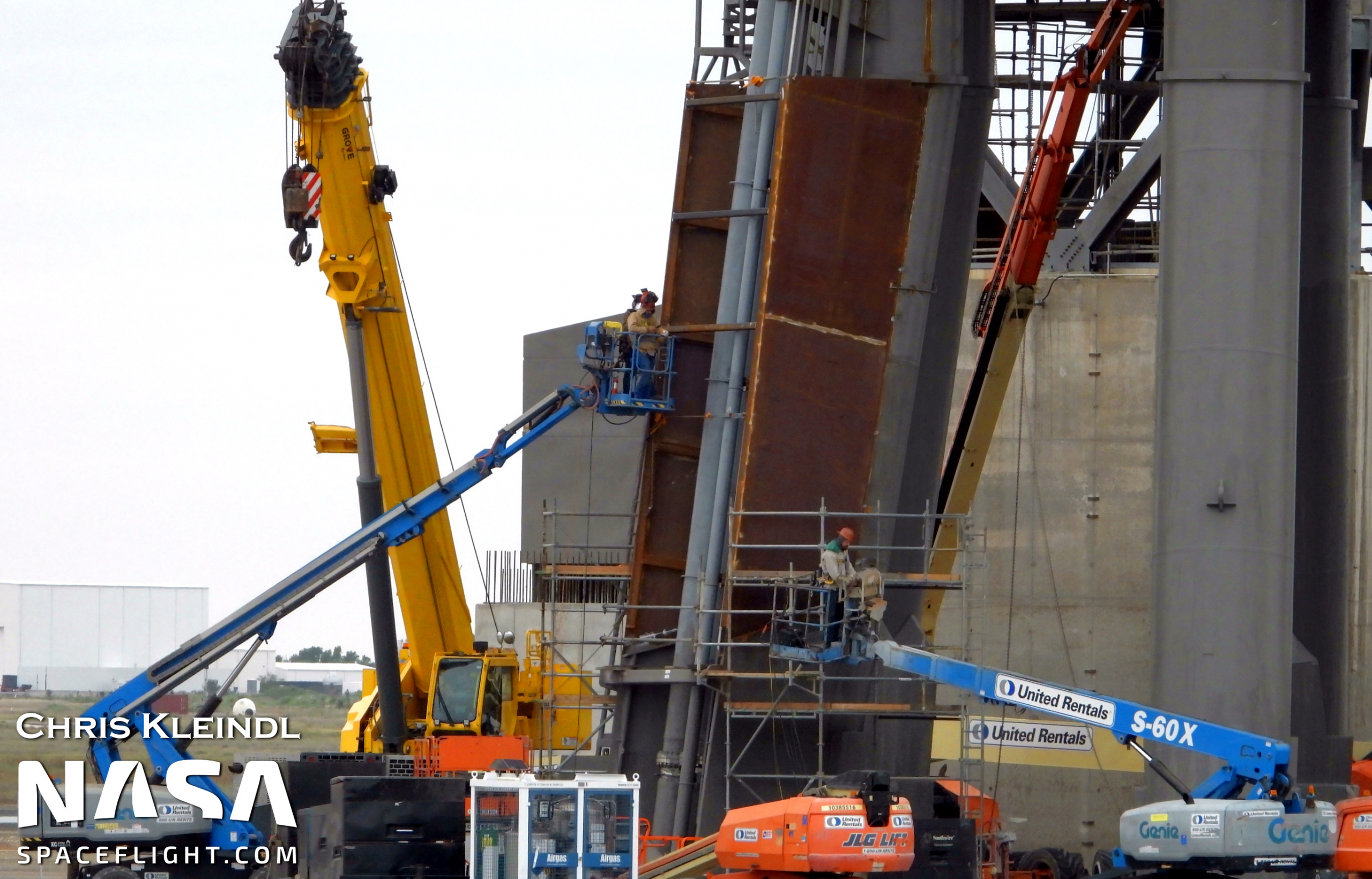 Another step toward the Static Fire test. Spray time! pic.twitter.com/K4E1iQ4iFl

It was expected that SpaceX would use the full nitrogen and water suppression system on the pad during the 14-engine static fire test, providing a crucial data point on the quality of this vital safety system at the pad.

Additionally, shielding and protection panels are now being prepared for installation on the Starship Launch Tower. A new wall was erected in the past few weeks near the tower entrance, and a protective “box” is now installed at the first level of the tower where the tank farm conduits and pipes meet with the tower and start running up the length of it.

Cladding panels have also been spotted nearby, a sign that likely points to them being installed soon and probably needed to protect the tower during the launch of the most powerful rocket ever built.

Unlike in previous instances, Ship 24’s destack from Booster 7 came as no surprise, with some insight provided by NASA on Oct. 31 during a meeting of the NASA Advisory Council. 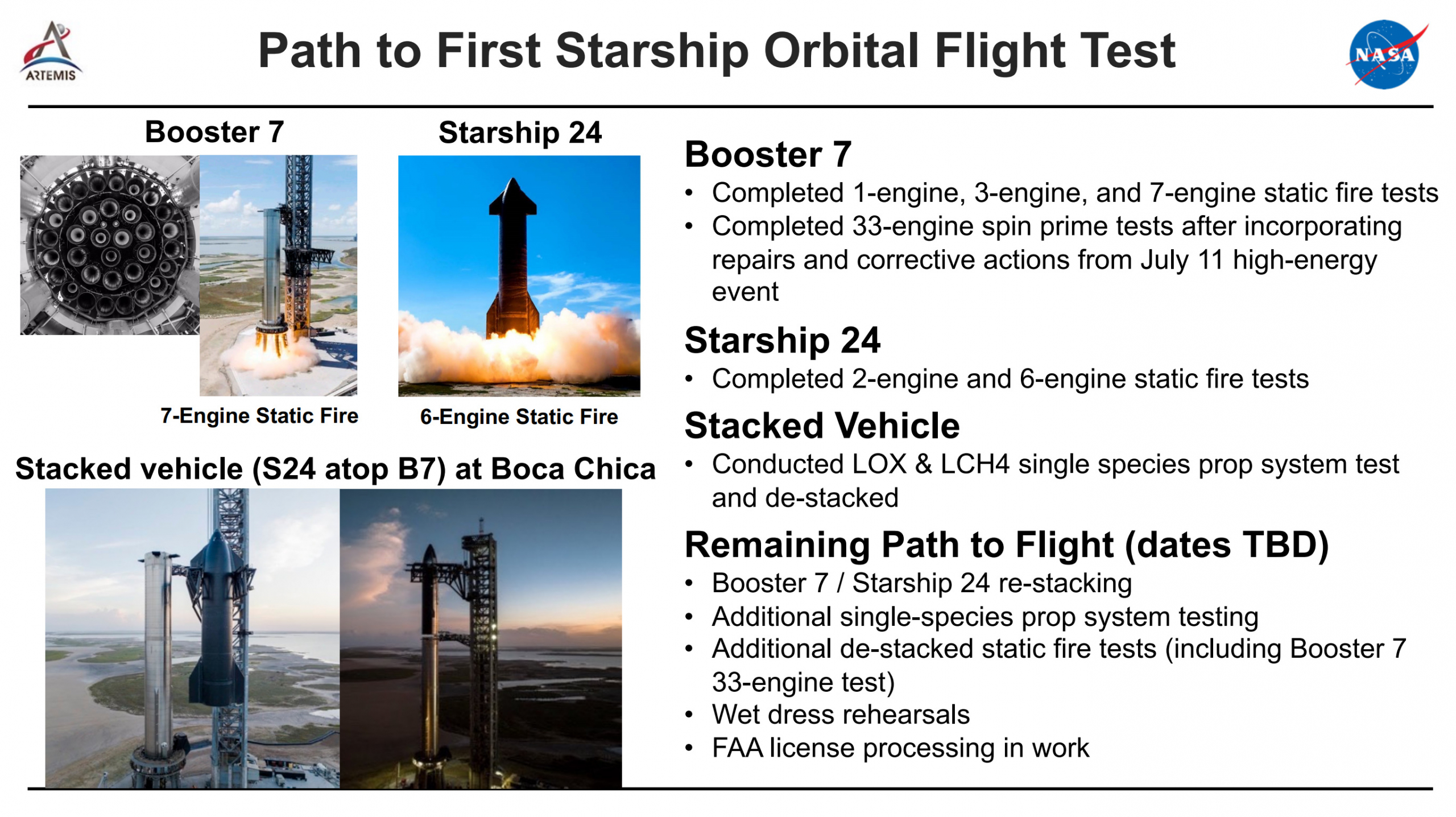 Since Starship is deeply involved in NASA’s Artemis program through the HLS contract, NASA has insight into the test campaign for its first orbital flight. During this meeting, officials mentioned that SpaceX intended to destack Ship 24 for Booster 7 to continue its static fire test campaign, eventually culminating with the 33-engine static fire test.

The destack took place on Nov. 8; the next day, Ship 24 was placed on suborbital pad B. This pad had been undergoing renovations and upgrades since the six-engine static fire test of Ship 24 just a few months ago.

A substantial amount of scaffolding is currently being installed for this work, which could involve creating a larger flame protection and diverter system for the stand than what was there for the last six-engine static fire test.

The path to Ship 24’s restack with Booster 7 is uncertain. A Raptor engine known to have been damaged on the vehicle’s last static fire test was removed from the ship on Nov. 12. Therefore, a new engine must be installed before stacking the vehicle on its booster. Still, it is also possible that the ship will need to be static fired with its new engine to validate the data and approve the vehicle for flight.

Once the vehicles return to the full stack configuration, additional propellant load tests will likely occur, as outlined in the NASA update. These tests would simulate a launch countdown sequence and would likely qualify as Wet Dress Rehearsal (WDR) tests, where the rocket – and control room teams – run through all the countdown steps minus igniting the engines and lifting off.

There also remains the possibility that SpaceX could attempt a full stack full engine static fire test at some point before launch as part of one of these WDRs. The company would also need an FAA launch license. However, as tends to happen, these are approved once most of the outstanding pre-launch tests are completed, sometimes issued just a few days before the launch.

Elon Musk provided additional context after the 14-engine Static Fire, noting the next test will be a 20-second firing, followed by possibly another Static Fire.

Ship 25 was rolled out to the launch site on Oct. 19 and was installed on suborbital pad A. Over the following three weeks, it performed several cryogenic proof tests, and it was removed from the pad and transported back to the High Bay at the production site.

The outcome of the cryogenic proof tests is not fully known, although no significant observable issues appeared during any of the tests. Therefore, it is expected that the work currently underway at the High Bay is to prepare Ship 25 for its upcoming static fire test campaign, which includes the installation of its three sea-level and three vacuum-optimized Raptor 2 engines.

Although Ship 25 enjoyed a few weeks of cryogenic proof testing, what was supposed to have been its flight partner, Booster 8, didn’t even get such a treatment.

This Super Heavy booster had been initially penciled in for Starship’s second orbital flight test as the booster that would help push Ship 25 into orbit, but it was never tested.

It was rolled back from the launch site and transported to what’s known by the fans as the “Rocket Garden” at Starbase, a place now famous for being the final resting place of many of the Starship prototypes that have been scrapped or retired. 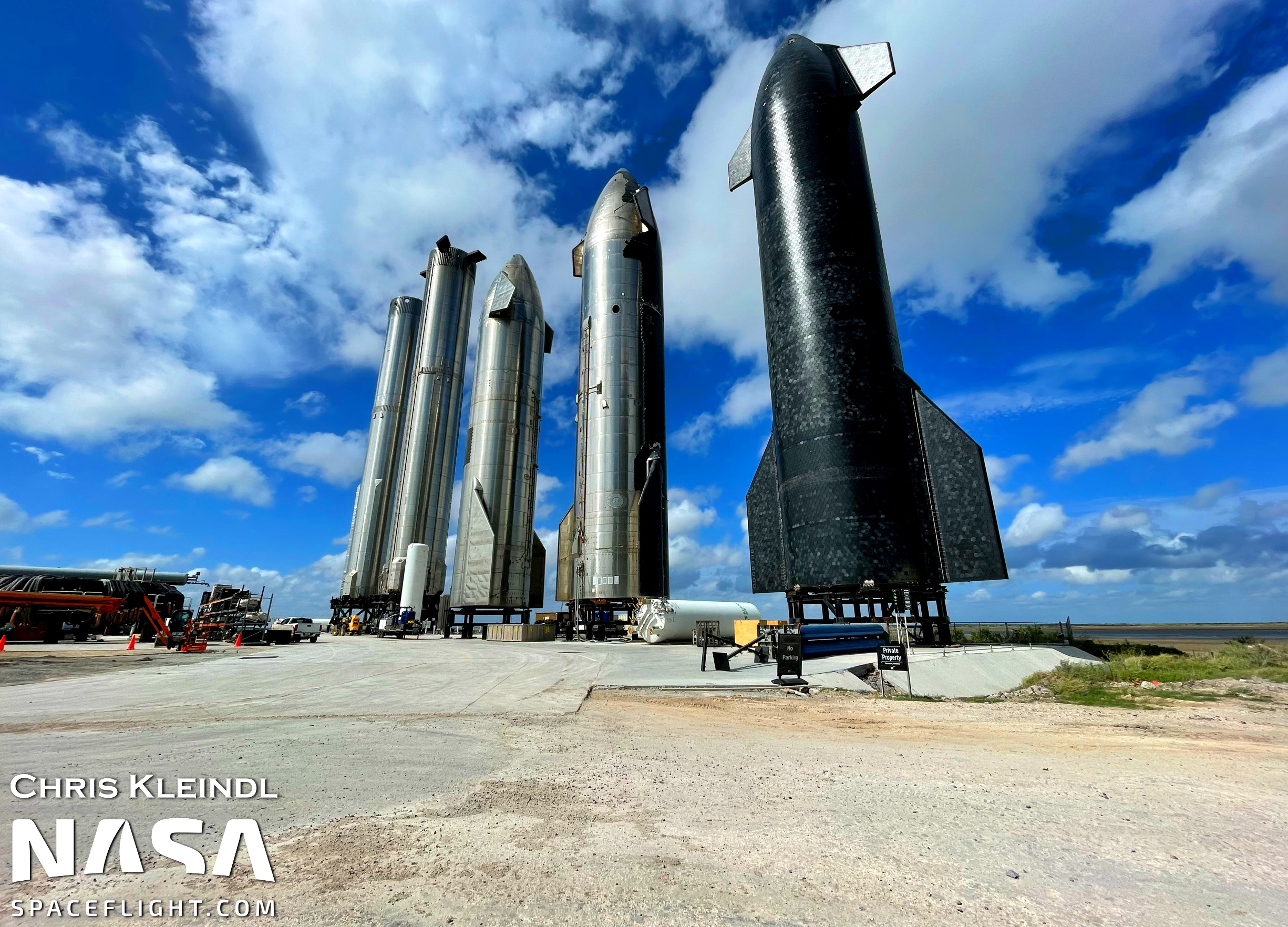 However, Ship 25’s new flight partner, Booster 9, was recently fully stacked inside the Mega Bay and now prepares for its own set of cryogenic proof tests, although the location of this test campaign is uncertain. Currently, there’s no place for a Super Heavy booster to be tested other than at the OLM, and Booster 7 is occupying it for its own static fire test campaign.

However, a new umbilical stand has been raised at the launch site by the ship cryo station. This stand was used previously to hold the umbilicals connected to boosters while tested on the structural test stand. This stand may make its way down to the launch site in the coming days or weeks and be where SpaceX will perform cryogenic proof testing on Booster 9. 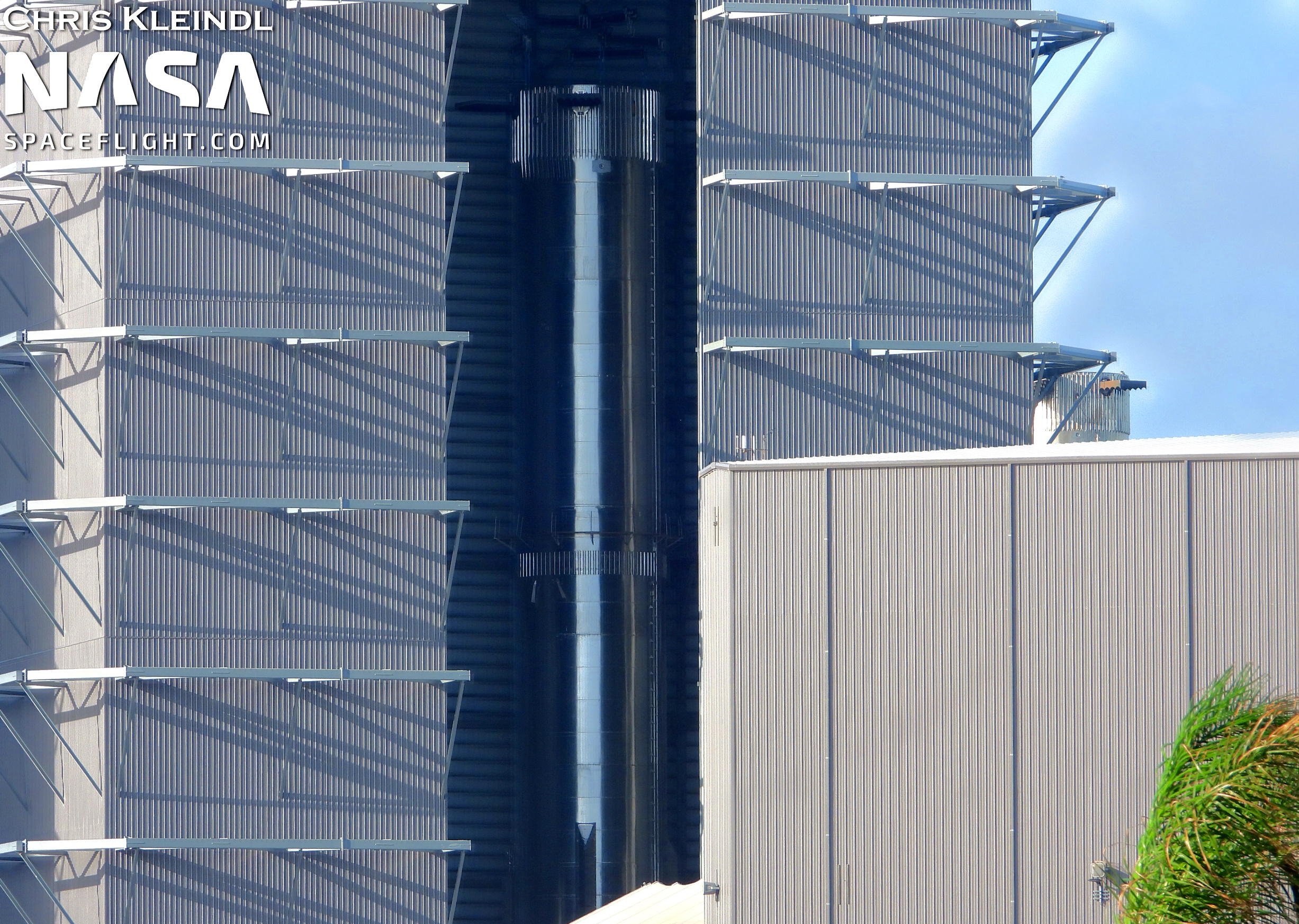 During NASA’s NAC meeting, another update related to the future flights of Starship. In particular, it was mentioned that the second flight test of Starship would include a propellant transfer test. This test will likely involve the transfer of propellant from the ship’s header tanks to the main tanks and vice versa, likely with the help of pumps or other similar mechanisms. However, not a lot of information has been revealed about this system.

While full stack and Ship 25 testing occurred, production of vehicles at Starship has kicked into a new gear as more and more vehicles are seen to progress through the later steps of production. 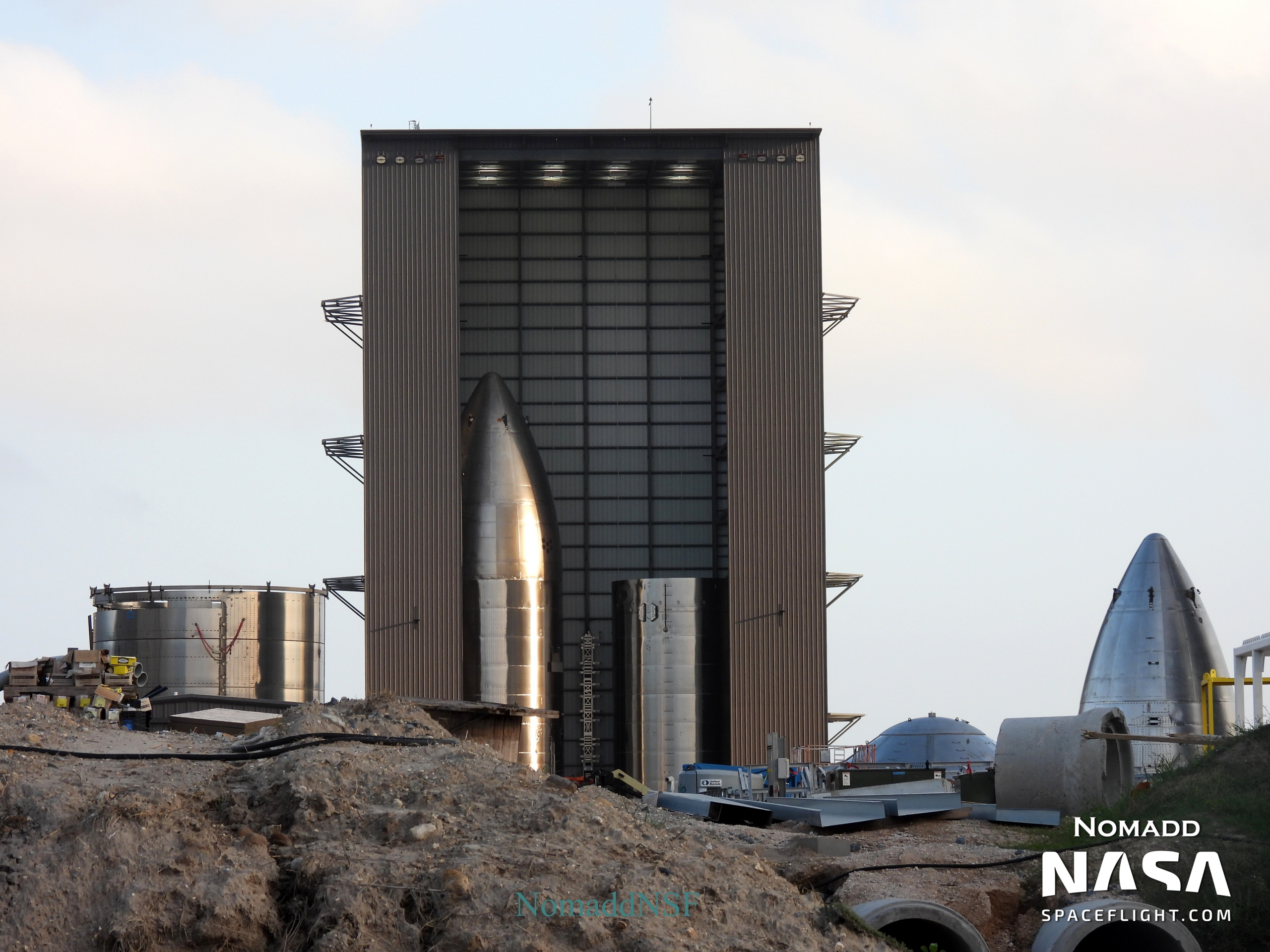 Additionally, this vehicle doesn’t include a payload bay with a dispenser and door. It is unclear what its flight objectives will be other than attempting to reach orbit after being pushed into orbit by its Super Heavy booster.

This booster, Booster 10, now has its methane tank fully stacked inside the Mega Bay, and grid fins have been installed on it, indicating good progress in production for this vehicle.

Ship 27 is also pushing through production with its common dome and mid-LOX sections now mated together in the Mid Bay. This ship is also expected to lack TPS tiles and aerosurfaces, but unlike Ship 26, it will indeed feature a payload bay. Its payload bay section received its Starlink v2 dispenser a month and a half ago, and it is now being processed within the tents at Starbase. 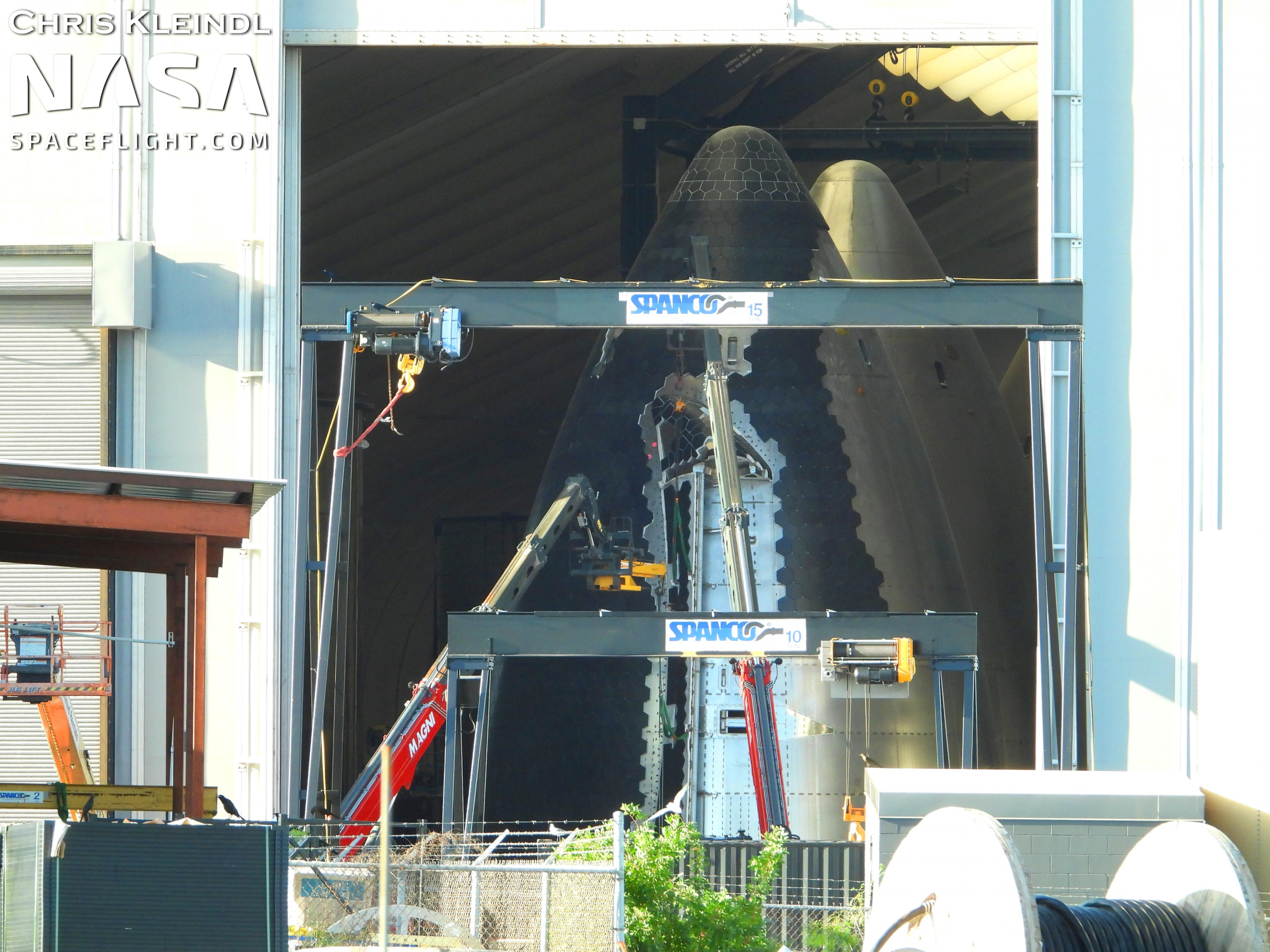 Tent 3 with Ship 28’s nosecone receiving aerocovers and TPS tiles in the foreground, Ship 29 and Ship 30’s nosecones are behind it. (Credit: Chris Kleindl for NSF)

Ship 28 and its flight partner, Booster 12, are expected to include a new design iteration, which may also see another Raptor upgrade. Inside Tent 3 and along many of the parts for Ship 28, nosecones have been spotted for Ship 29 and Ship 30 as well.

On Nov. 4, SpaceX tweeted that they had completed production of the 200th Raptor 2 engine. This engine is likely now at McGregor and will be included in the long line of engines waiting for testing at the company’s development and test facility.

More recently, the company has been performing long firings of its Raptor engines, including an over 5-minute burn of a vacuum-optimized Raptor 2 engine.

At the same time, the company appears to be upgrading the large tripod stand at the heart of the facility. This upgrade appears to involve installing a new set of larger ground support equipment (GSE) tanks.

It’s yet unknown why this upgrade is needed, but normally more GSE tanks would imply more propellant stored, therefore, the capability of performing longer burns.

Over in Florida, progress is continuing at the Starship facilities at KSC. 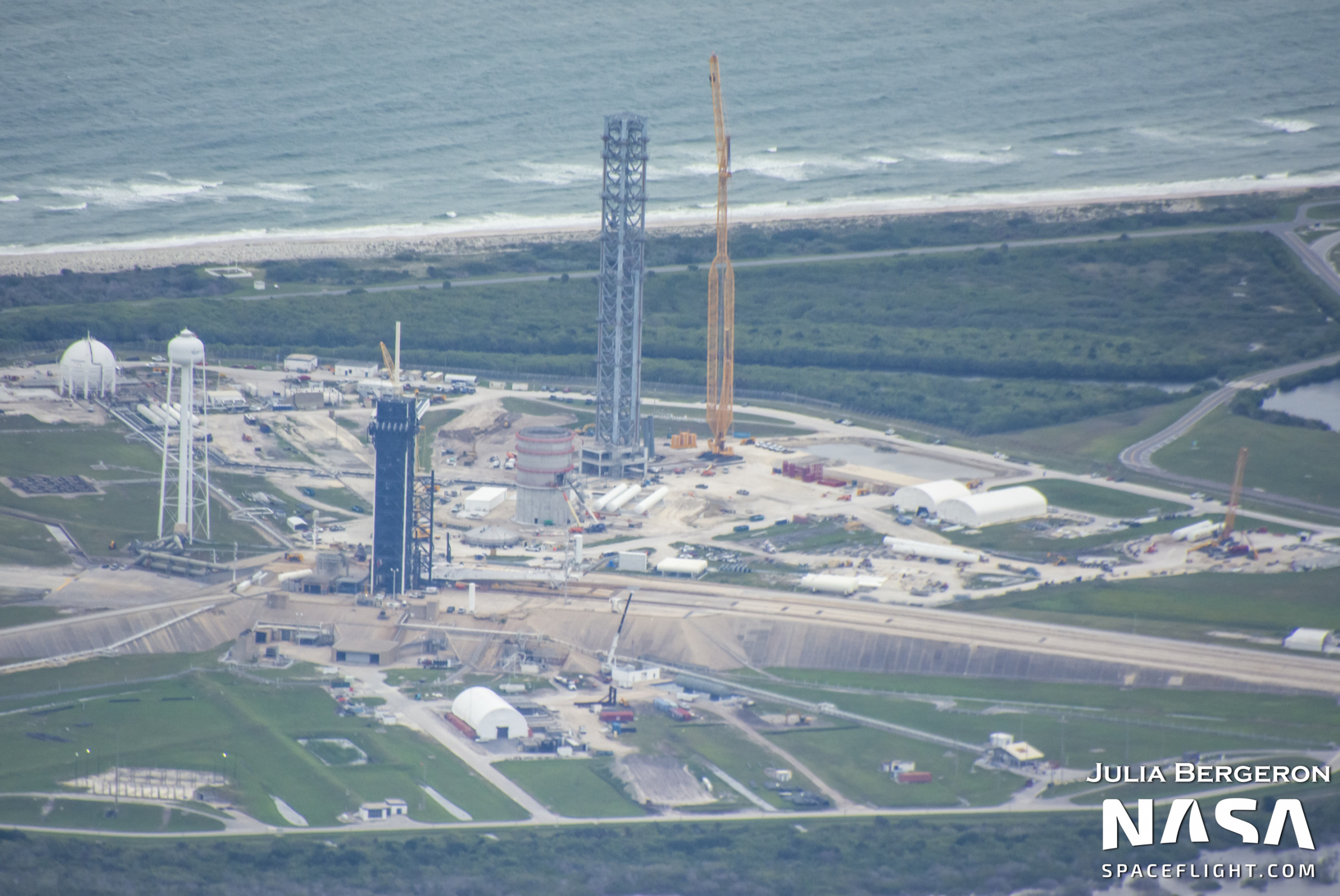 Preparations for Falcon Heavy’s fourth flight on the USSF-44 mission appear to have slowed down some of the work at Launch Complex 39A’s Starship launch pad, although some visible work has been done on capping off the inner shell of the large LOX tank being built at the pad.

Hurricane Nicole, the second hurricane to pass by Florida in just a month and a half, won’t have helped either in the progress of work at the pad.

Questions remain as well as to the status of 39A’s own Orbital Launch Mount which is still undergoing construction inside Hangar M at the Cape. Previous schedules had placed the move of this massive structure around the middle of September, but timelines for it have been slipping to the right, and it is unclear yet why that is the case.