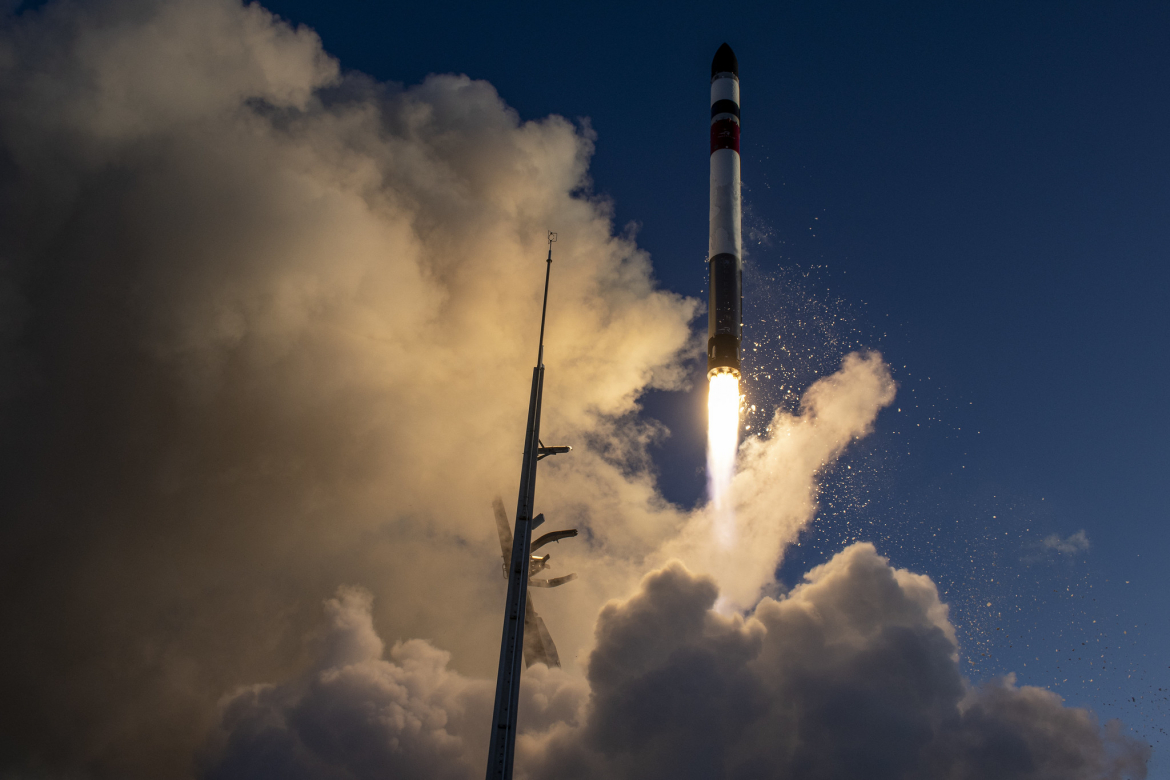 Six months after its first first-stage recovery attempt, Rocket Lab tried its hand at booster recovery once again, with the launch of its 32nd mission, “Catch Me If You Can.” Liftoff took place on Saturday, Nov. 5, 2022, at 6:27 AM NZDT (17:27 UTC on Friday, Nov. 4).

The California-based launch services company made its first attempt at first-stage recovery and reuse during its 26th mission, named “There And Back Again.” On that mission, a successful mid-air catch via helicopter was made, though unexpected load characteristics necessitated a drop and an ocean recovery.

On “Catch Me If You Can,” no mid-air catch was achieved due to a telemetry drop out during Stage 1 reentry.

The “Catch Me If You Can” mission utilized Rocket Lab’s workhorse launch vehicle: the two-stage, partially reusable Electron. With 31 total flights since its debut in 2017 and a 90% rate of success, the Electron rocket serves as a leading example in the small satellite launch market.

The mission launched from Pad B (LC-1B) at Rocket Lab’s Launch Complex 1, located on the Māhia Peninsula in New Zealand. With Pad A just a short distance away from Pad B, the private spaceport can support simultaneous mission campaigns from the same site, thereby increasing the company’s launch cadence.

“Catch Me If You Can” marks the ninth launch of 2022 for Rocket Lab and the second mission geared towards stage reusability — the first being the previously mentioned “There and Back Again” mission which launched on May 2.

Recovery of the Electron rocket’s first stage was a secondary goal for Saturday’s mission, with the primary aim being the successful launch and deployment of a single science research satellite for Sweden.

The Mesospheric Airglow/Aerosol Tomography and Spectroscopy (MATS) spacecraft was developed by space systems provider OHB Sweden for the Swedish National Space Agency (SNSA). The spacecraft is expected to study the upper layer of Earth’s atmosphere and its interactions with wind and weather patterns from a 585 km Sun-synchronous orbit (SSO).

The satellite has a launch mass of approximately 50 kilograms and features two science instruments: a limb imager and a nadir imager that are designed to view the Earth’s atmosphere in varied wavelength intervals. The MATS payload was originally expected to fly on a Russian launch vehicle before being reassigned to Rocket Lab’s Electron.

In 2019, Rocket Lab divulged their recovery and reuse plans for Electron, which initially was not designed with such capabilities in mind. However, thanks to an increased understanding of vehicle performance and a need to meet launch demands, the company elected to pursue reusability for the foreseeable future.

Unlike SpaceX’s Falcon 9 and Falcon Heavy rockets — which use retropropulsion to land themselves (either at sea on any of the company’s three drone ships or back on land at designated Landing Zones if mission performance requirements allow) — Rocket Lab’s Electron booster can be caught in mid-air using a helicopter while descending under a parachute.

Work on implementing reuse began in earnest in the spring of 2019 with Electron flights six and seven (“That’s a Funny Looking Cactus” and “Make It Rain”), where both Electron rockets featured new instruments on the first stage to help gather data for future recovery attempts. Flight eight (“Look Ma, No Hands”) built on this with Brutus, an instrument designed to survive reentry and be retrieved after splashdown.

Catch Me If You Can? Challenge accepted. In two days' time, here's how we'll attempt to catch Electron with a helicopter as the rocket returns from space.

Later, Rocket Lab introduced a block update for the Electron first stage as part of Flights 10 and 11 (“Running Out Of Fingers” and “Birds Of A Feather”) in order to allow for guided reentry attempts. Upgrades included additional hardware for guidance and navigation, onboard flight computers, a reaction control system (RCS), and a new heat shield at the base of the vehicle. These new updates functioned as intended, helping the booster survive reentry despite the absence of deceleration hardware.

Following Flight 11, in February 2020, Rocket Lab began conducting low-altitude parachute tests using an Electron test article. Mid-air retrieval was successfully demonstrated with one such test in March, where the test article was dropped and subsequently snagged by a helicopter with a long boom. Following the catch attempt, the test article was brought back to land.

In November 2020, during Electron Flight 16 (“Return To Sender”), Rocket Lab successfully recovered a first stage for the first time via a controlled water landing in the Pacific Ocean, using a set of parachutes to decelerate to a safe velocity. This ocean recovery method would be used on two later missions (Flight 20 “Running Out Of Toes” and Flight 22 “Love At First Insight,” respectively).

These efforts eventually culminated in the briefly successful mid-air booster recovery attempt which took place during the “There And Back Again” mission on May 2, 2022. Shortly after the catch, the recovery helicopter pilot took notice of unexpected load characteristics and released the stage to ensure the safety of the recovery crew. 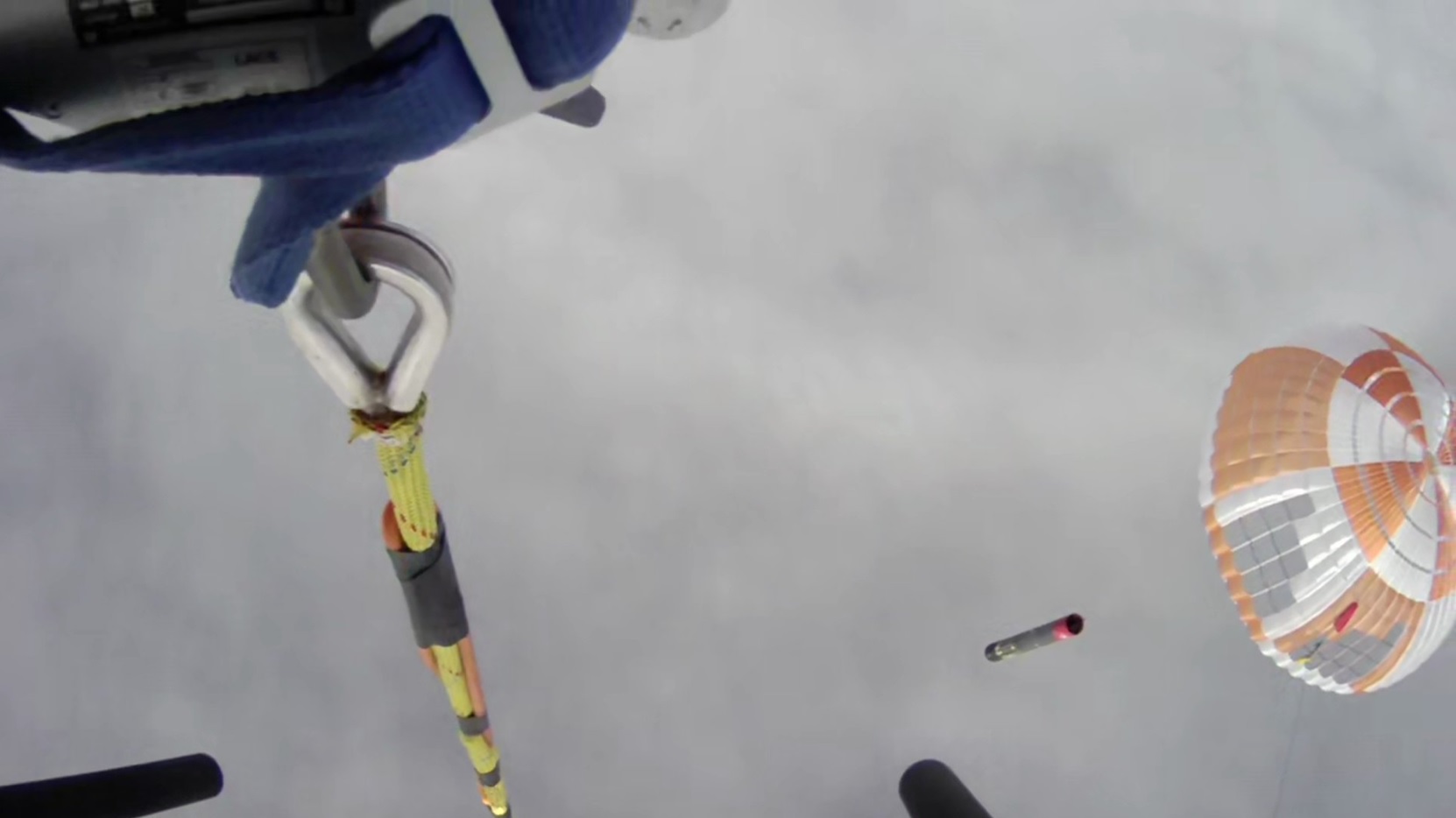 Electron descends under parachute, waiting to be captured by helicopter during the “There And Back Again” mission. Credit: Rocket Lab

The “Catch Me If You Can” mission also featured an attempt at a mid-air recovery, with the help of a Rocket Lab-owned and customized Sikorsky S-92 two-engine helicopter. Shortly before liftoff, the craft and its three-person crew (pilot, co-pilot, and rocket spotter) deployed to the catch zone, located approximately 160 nautical miles off the coast of New Zealand.

After reentering the atmosphere, at approximately T+7:20 minutes after liftoff, the Electron booster deployed a drogue parachute to stabilize and partially slow the vehicle. The main parachute then deployed approximately 50 seconds later to further reduce its velocity to ~10 meters per second.

As Electron enters the capture zone, the helicopter crew shadows the booster from above, matching its speed and descent before moving in to capture the parachute engagement line via a hook on a boom. The catch attempt was to occur approximately T+18 minutes into the flight.

Once captured and secured, Electron can be flown back to Rocket Lab’s production facility in Auckland, where technicians will perform inspections and assess its suitability for reuse.

The pump-fed Rutherford engines on Electron’s first stage have, so far, proven to be up to the task, as Rocket Lab has successfully fired a reused engine from the “There And Back Again” mission. According to Rocket Lab, the engine produced full thrust and performed multiple restarts, passing the same acceptance tests that are conducted on each motor before launch.

With the mid-air recovery method, Rocket Lab hopes to reduce the amount of work required for booster turnaround, leading to a more rapid cadence for reflights.

A successful launch during Saturday’s mission would continue to build on a stellar 2022 launch campaign for Rocket Lab, having compiled a 100% success rate on the year so far across eight flights, including the successful launch of the CAPSTONE lunar mission for NASA on June 28.

After more than 30 missions from LC-1, it's almost LC-2's turn. Launching in December for our mission partner @hawkeye360. pic.twitter.com/9aMKunP3GQ

Another Electron mission is slated to launch before the end of the year, acting as the long-anticipated debut of Rocket Lab’s first U.S.-based spaceport: Launch Complex 2 (LC-2) at NASA’s Wallops Flight Facility in Virginia. The mission is expected to be a rideshare mission, featuring multiple customer payloads.

(Lead photo: “Catch Me If You Can” lifts off from LC-1B. Credit: Rocket Lab)