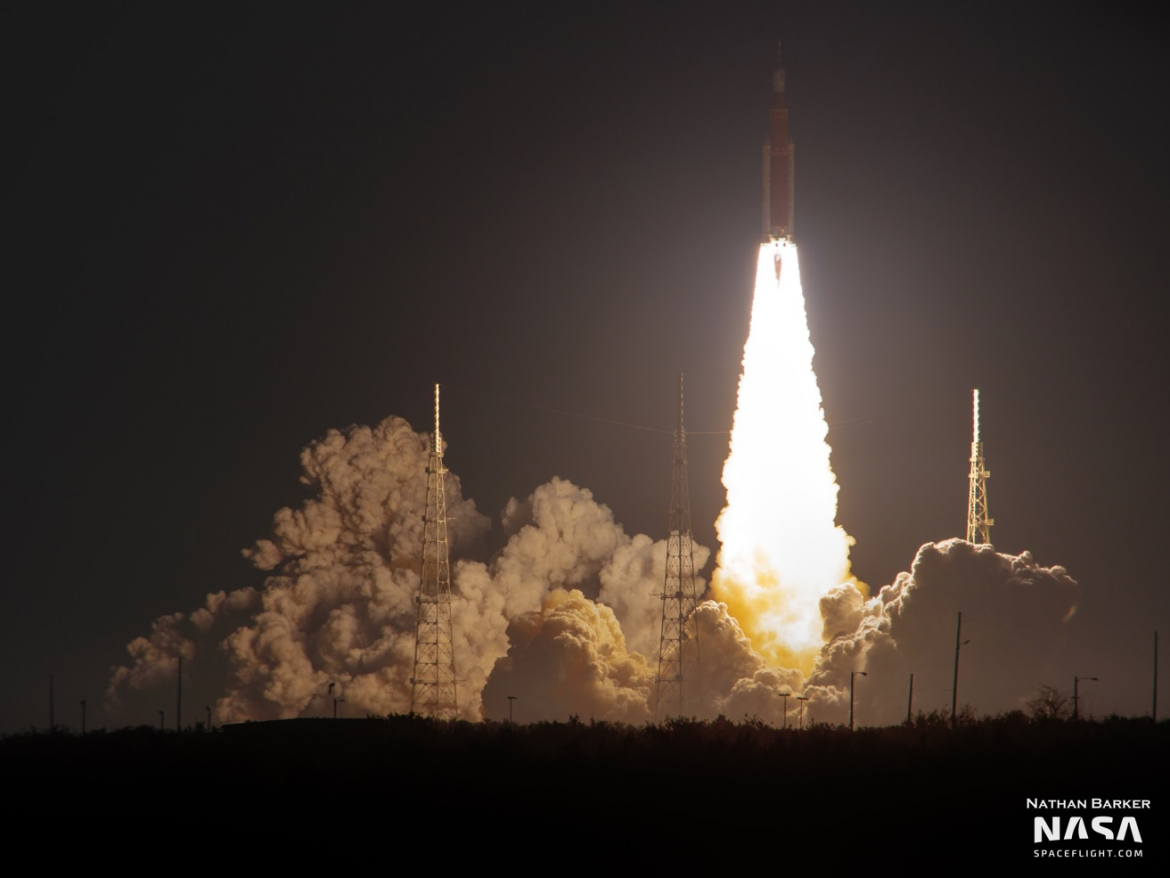 Following a successful first launch of the Space Launch System (SLS) and its critical Core Stage, Boeing is looking ahead to “the SLS fleet” as the aerospace company moves to complete the next three core stages for Artemis missions II through IV.

Meanwhile, design and materials orders are in work from Boeing for SLS’s new upper stage, the Exploration Upper Stage (EUS), which is set to debut on Artemis IV.

“The performance on the vehicle has been phenomenal,” said Noelle Zietsman, SLS Chief Engineer for Boeing, in an interview with NASASpaceflight. “We have been able to perform a quick look at the data, and all systems performed on the Core Stage per plan” on Artemis I.

“The total overall performance, I can’t reiterate enough the phenomenal accomplishment. It met the trajectory where it was to pop off the ICPS and Orion, and when you look at the accuracy that it made, it was really unbelievable. So just super phenomenal.”

Per the pre-flight plan, the core stage was to drop the ICPS (Interim Cryogenic Propulsion System) and Orion/European Service Module off in an initial 30 x 1,805.7 km orbit.

A well-within-parameters 2.1 meter per second (7 foot per second) underspeed occurred at Main Engine Cut Off (MECO), resulting in an actual initial orbit of 30 x 1,800.1 km.

Addressing this, Zietsman noted, “With everything, you’ve got a tolerance on the performance of all your parameters. So within the tolerance of the performance, you are measuring and ensuring that you’re meeting those requirements.”

“And so the vehicle, even though there was a little bit [of underspeed] from a data standpoint, it still met the requirements and location based on the tolerances that we have.”

Likewise, Zietsman confirmed that MECO was a software-guided cut-off of the engines as intended versus the drain-to-depletion test that was performed at the Stennis Space Center during the Green Run campaign in 2021.

Zietsman also confirmed that communication with the Core Stage was maintained throughout the anticipated flight envelope, including the beginning phases of its planned, destructive reentry near the Hawaiian islands for safe disposal in the Pacific Ocean. 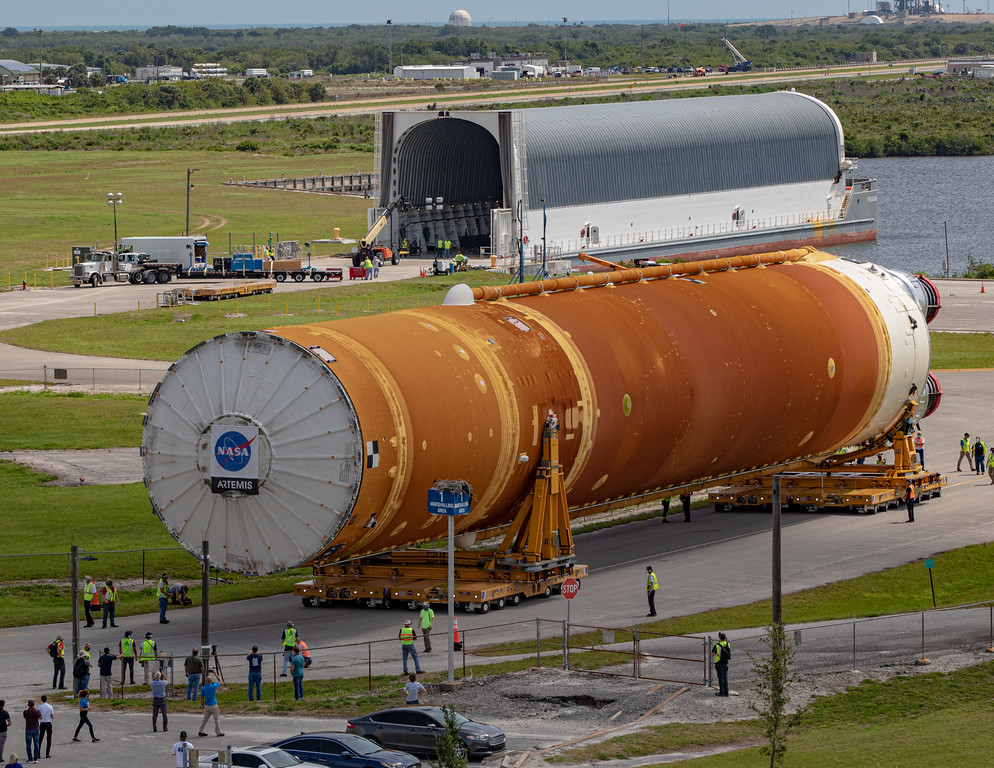 Core Stage 1 arrives at the Kennedy Space Center in Florida in April 2021 for the Artemis I missions. (Credit: Philip Sloss for NSF)

All around, Boeing noted that the data reviews as of publication indicate a well-within-baseline performance of Core Stage 1 when compared to pre-flight modeling and analyses. “Usually, you anticipate that you’ll have a few little items that will come up, but it just was a phenomenal mission accomplishment,” reiterated Zietsman.

With Core Stage 1’s flight now in the books for Boeing, attention continues to be paid to the future core stages currently in production at the Michoud Assembly Facility (MAF) in Louisiana.

In particular, Core Stage 2 is approximately 85% complete according to Zietsman, with engine installation work set for completion by the end of the year ahead of a planned spring 2023 shipment of the stage to the Kennedy Space Center.

“We’re very far along across our assembly and integration of Core Stage 2,” said Zietsman. “We’ve got our major assemblies done; we’re getting into our functional test of the engine section, and then the next major event that we do after the engine section functional test is the integration and final mate — the mate the rest of the assembly to the LH2 [liquid hydrogen], the LOX [liquid oxygen] tank.”

The main assembly of the LH2, LOX, forward skirt, and intertank structure for Core Stage 2 is already assembled. 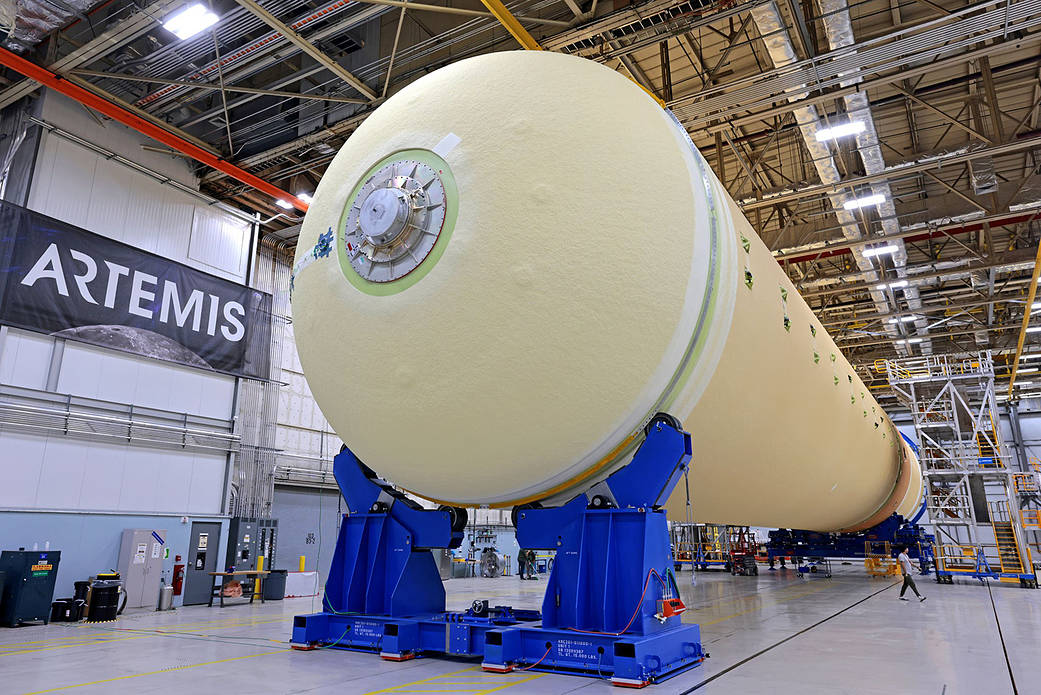 The base of the liquid hydrogen (LH2) tank of Core Stage 2. The stage is being readied for engine section mate. (Credit: NASA)

Additional preparations at MAF will include readying the ground equipment and Pegasus barge for transportation operations to the Kennedy Space Center.

Looking further ahead, Zietsman noted that major assemblies for Core Stage 3 are underway and have so far been executing well to that mission’s overall timeline.

Likewise, build operations are also underway for Core Stage 4, while the core for Artemis V is currently having parts and equipment ordered for its eventual build and assembly.

However, the Core Stages for Artemis IV and beyond will be different from those that come before as they need to accommodate a much larger upper stage in the EUS. This new SLS configuration is called Block 1B whereas the version that uses the ICPS for Artemis missions I through III is called Block 1.

“Core Stage 4, we’re already into building the major assemblies,” noted Zietsman. “On the EUS side, we’ve gone through our design phase, and this year we completed the NASA CDR [Critical design Review] just recently on the Block 1B. So we’re in the middle on EUS of getting our components built and qualified.” 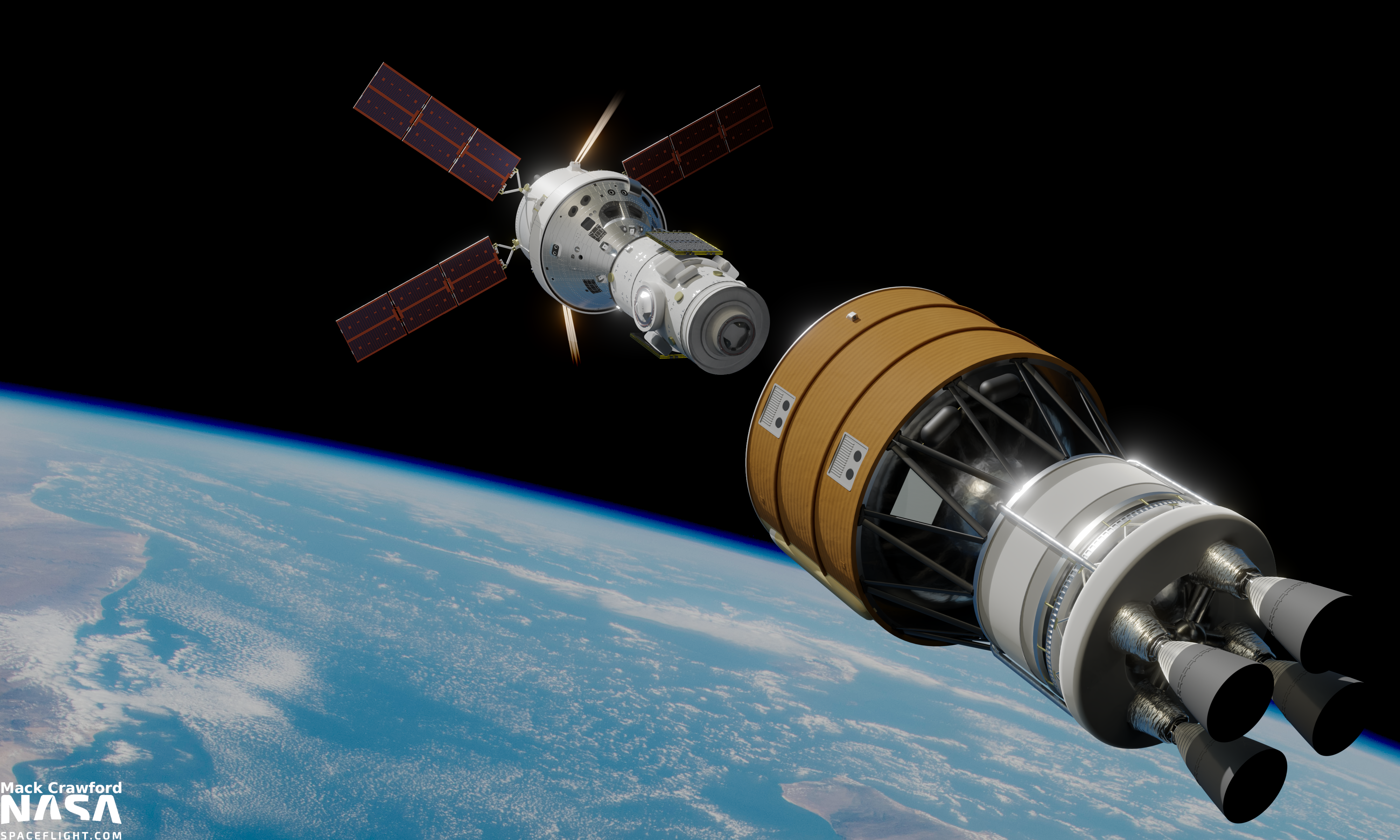 Orion extracts a payload from the Exploration Upper Stage after a successful trans-lunar injection burn. (Credit: Mack Crawford for NSF)

Test articles for the EUS are currently in work, while Boeing prepares for the actual assembly process to begin.

Like the Core Stage, the first EUS will head to the Stennis Space Center for a Green Run series of tests, including a full-duration hot firing of its four RL10C-3 engines.

While Boeing is the prime contractor for the EUS, Aerojet Rocketdyne will build and supply the RL10C-3 engines for the stage.

At present, the first EUS Green Run is scheduled for 2024. “We’re tracking to that plan, and we’re moving along through finishing up the design phase while we’re getting all of our components ordered and the qualification hardware in work,” noted Zietsman.

Per Core Stage alterations needed to accommodate the EUS, most of that work relates to structures on the forward skirt of the Core Stage and beefing up those sites to be able to handle the increased mass of the EUS over the ICPS. 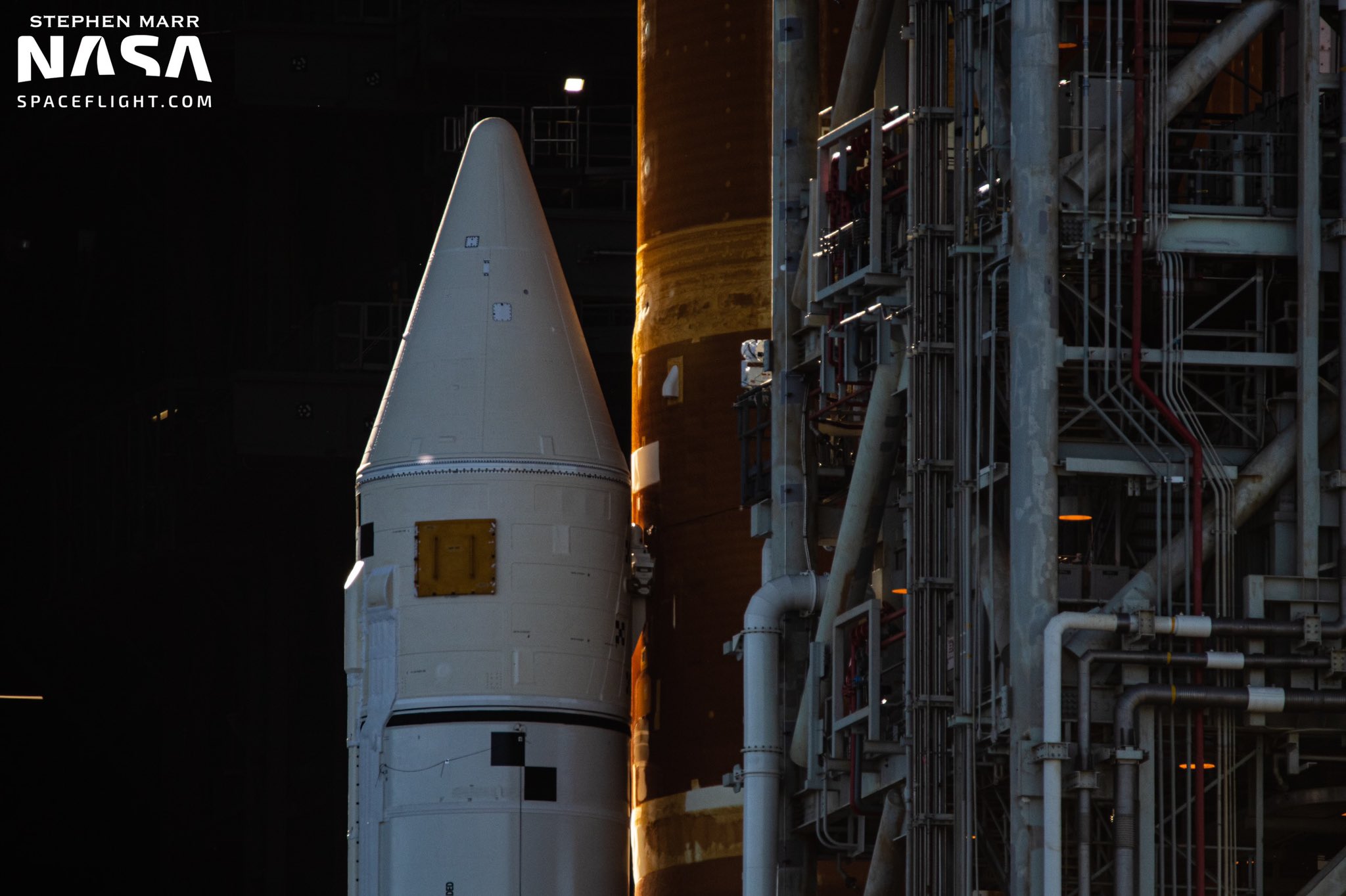 The forward attach point of an SRB for SLS — connected via a thrust beam in the intertank to its twin SRB on the other side of the Core Stage. (Credit: Stephen Marr for NSF)

One element of the Core Stage that does not need to be altered to accommodate EUS is the intertank structure which contains the critical thrust beam that connects the twin Solid Rocket Boosters (SRBs) and carries most of the thrust load during the first two minutes of flight.

Given the sheer amount of force already imparted to that area of the vehicle by the SRBs, no increase in capability was needed in that area for the switch to the Block 1 B variant of SLS.