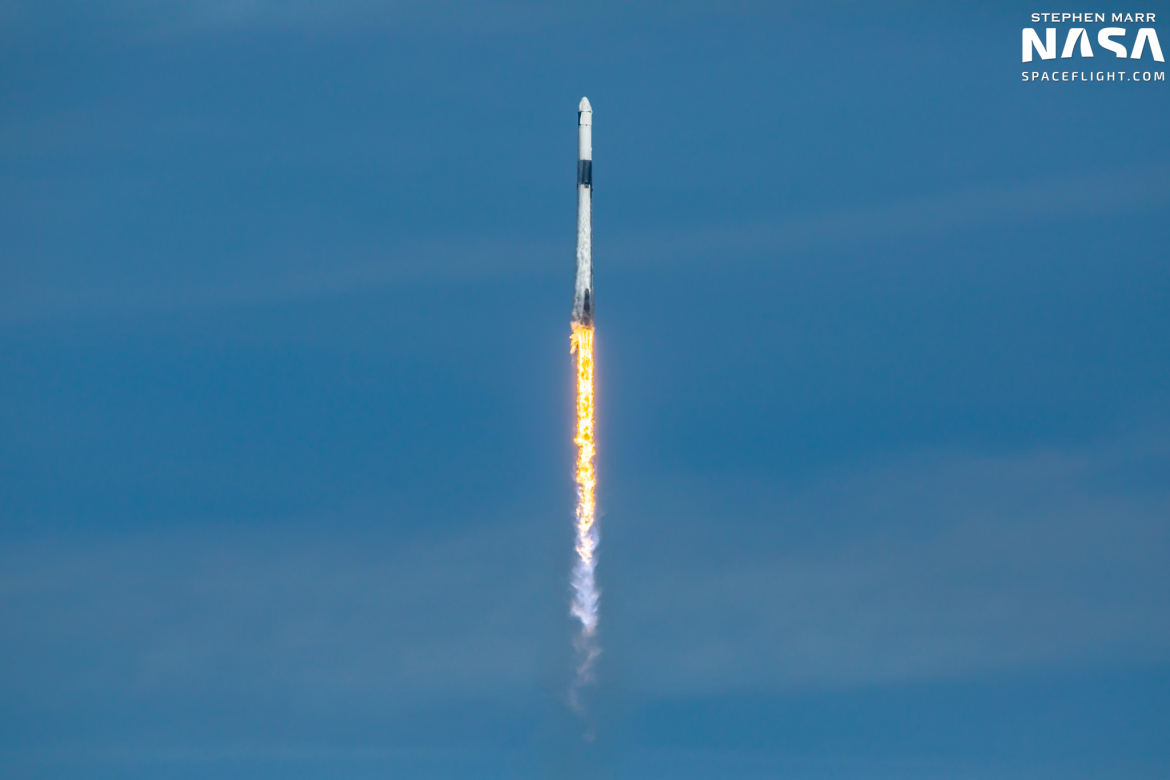 The spacecraft will resupply the Expedition 68 crew aboard the Station and is carrying a second pair of ISS Roll Out Solar Arrays or iROSAs inside the unpressurized trunk of the spacecraft. The two iROSAs will eventually be installed on the exterior of the ISS during spacewalks currently scheduled for late November and early December.

The Falcon 9 booster supporting this mission was B1076-1, which was launching on its first flight. Following the launch, it landed on the Autonomous Spaceport Drone Ship named Just Read the Instructions downrange of KSC in the Atlantic Ocean.

The booster was different from other SpaceX boosters as it featured fewer SpaceX logos and no Falcon 9 markings (which is normal for Falcon Heavy side cores), which is a departure from the standard Falcon 9 livery. B1076 will be used as a Falcon Heavy side booster core later on.

The launch on Nov. 26 at LC-39A comes 10 days after NASA’s Space Launch System launched on its maiden flight from LC-39B on the Artemis 1 mission. This marked the closest back-to-back launches from both pads combined at Launch Complex 39.

The closest back-to-back launch from the complex occurred in 1973, when the Skylab space station launched atop the final Saturn V rocket from LC-39A on May 14, 1973. The first crew of Skylab then launched atop a Saturn 1B rocket at LC-39B 11 days later on May 25, 1973.

The launch was originally scheduled for Nov. 21; however, this date was pushed back to Nov. 22 to address a leak that occurred in the thermal control system in the cabin onboard Dragon.

On Nov. 20, the drone ship Just Read the Instructions departed Port Canaveral, Florida, while under tow from the SpaceX recovery ship named Bob. The duo traveled into the Atlantic Ocean to the first stage recovery zone off the coast of the Carolinas.

On Nov. 21, Falcon 9 rolled out from the Horizontal Integration Facility (HIF) at LC-39A. Before this, the Cargo Dragon spacecraft was integrated with the launch vehicle after being fueled with hypergolic propellant at a different location. 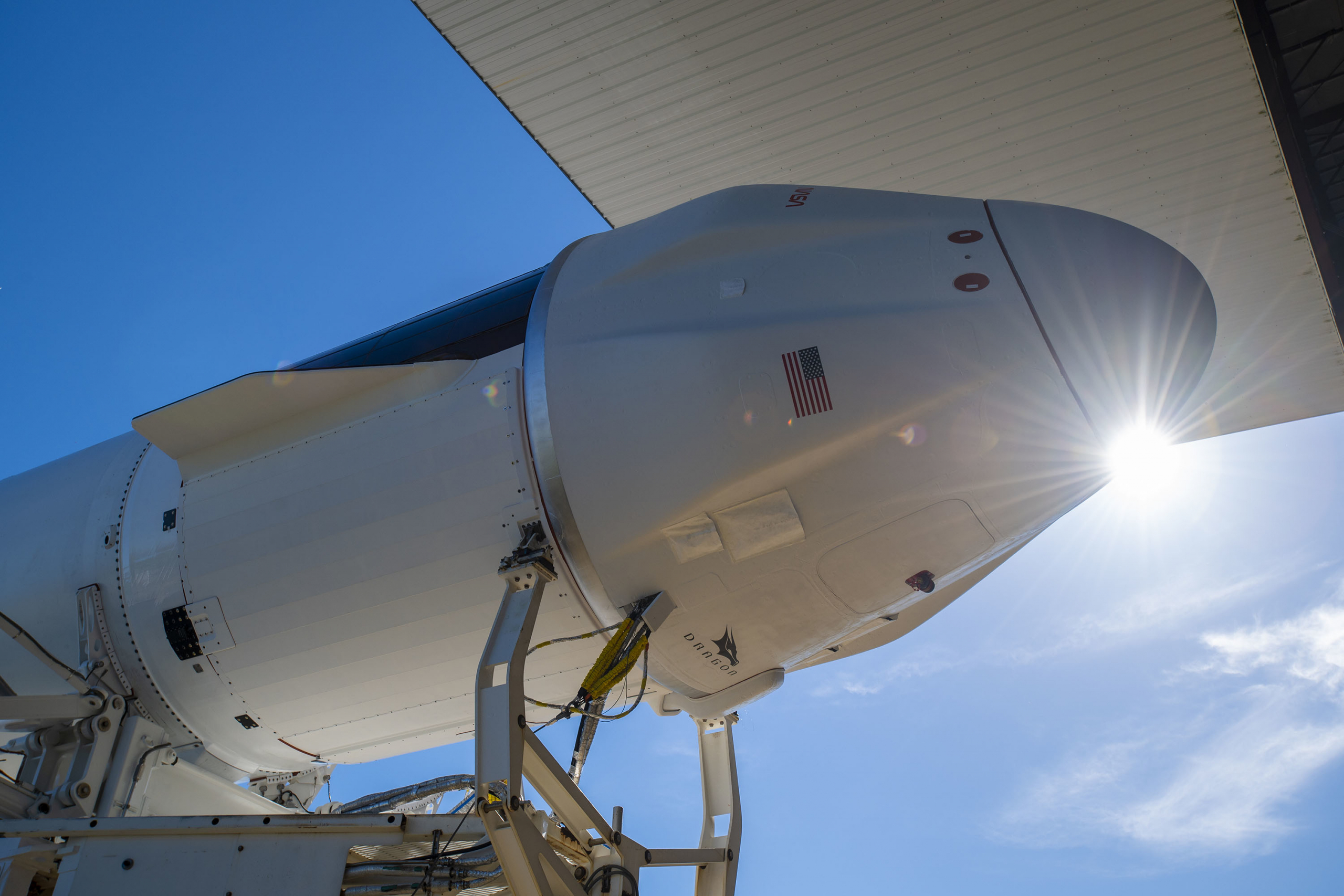 The SpaceX Cargo Dragon 2 for the CRS-25 mission is seen during rollout from the HIF at LC-39A. (Credit: SpaceX)

The rocket was rolled out from the HIF on the Transport Erector, or T/E. Before the launch campaign for SpaceX’s CRS-26, Falcon Heavy launched from LC-39A, which required changes on the T/E. Between missions, the T/E and the pad itself had to be converted back to the Falcon 9 and Dragon configuration.

The Falcon 9 rocket was then rotated from horizontal to vertical on the launch pad. Before launch, cargo loading inside of Dragon occurred. This activity utilizes the crew access arm on the Shuttle-era Fixed Service Structure or FSS.

After the cargo loading was completed aboard Cargo Dragon, the arm was retracted on the FSS.

The main portion of the countdown began at the T-35 minute mark with the beginning of the launch autosequence. at the same point in the countdown, fueling operations commenced on the launch vehicl with the loading of RP-1 kerosene on both the first and second stages of Falcon 9.

At around the same time that RP-1 began to flow into the launch vehicle, liquid oxygen, or LOX, will also began flowing into the first stage.

At the T-20 minute mark before launch, RP-1 loading was complete on the Falcon 9 second stage. At that time, a large vent emanating from the T/E will occurred, showing that SpaceX and Falcon 9 were progressing toward the business end of the countdown.

LOX loading on the second stage began at the T-16 minute mark. Before launch, the T/E was retracted to the launch position. 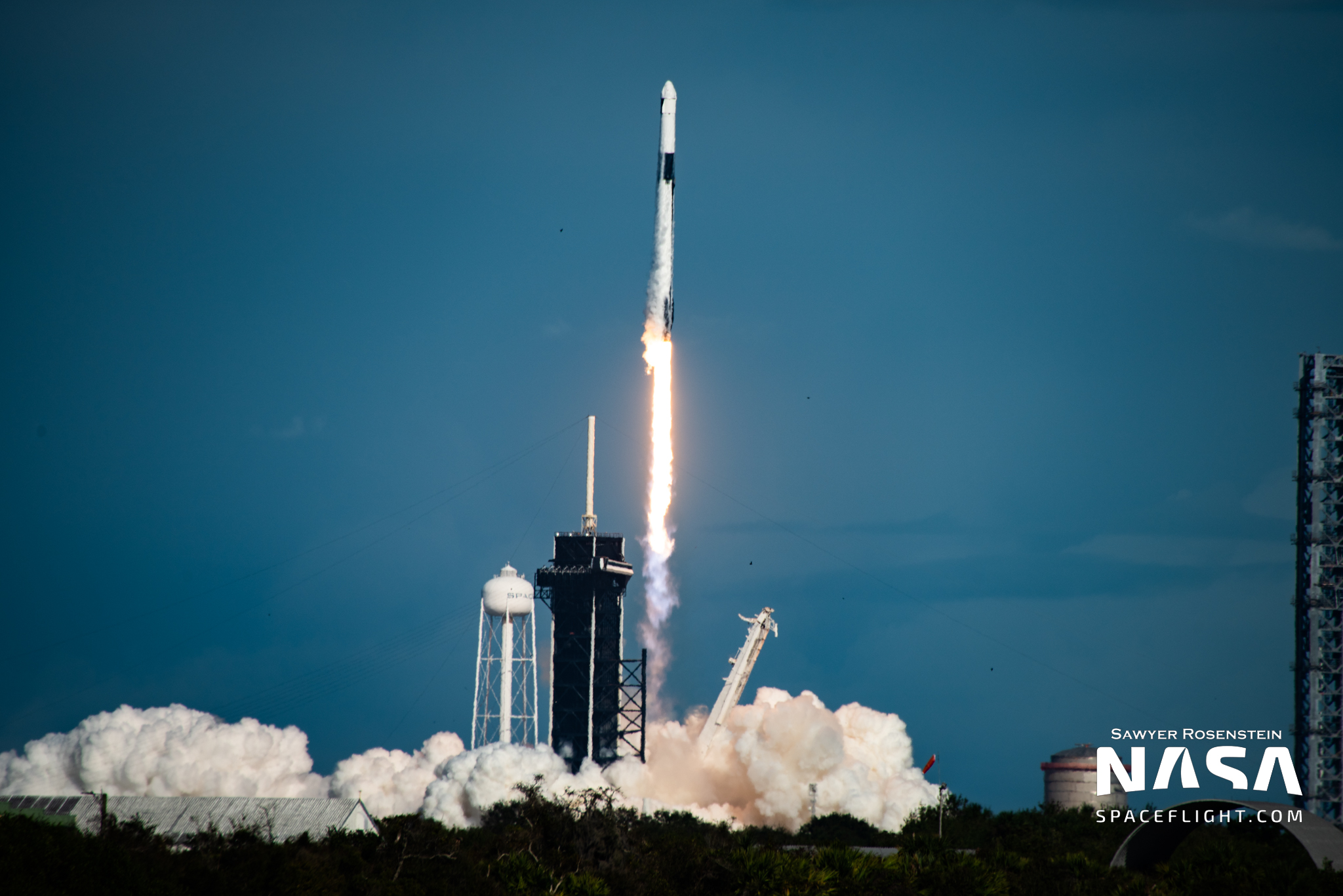 Falcon 9 lifts off from LC-39A carrying the CRS-26 mission to resupply the ISS. Credit: Sawyer Rosenstein for NSF

Soon after this, Falcon 9 entered what is called “startup.”

Three seconds before launch, the nine Merlin 1D engines on the first stage of the Falcon 9 ignited. The ignition of these engines occurred with ignitor fluid called TEA-TEB and appears as a bright green flash.

At T0, the hold-down clamps on the reaction frame on the launch pad released Falcon 9 and Dragon as they ascended into the sky. At the same time, the T/E retracted further to protect it from the launch vehicle.

Falcon 9 next rolled to the proper launch azimuth to take it to a 51.6-degree inclined orbit, enabling it to rendezvous with the ISS. The vehicle then pitched downrange of KSC as it heads over the Atlantic Ocean. 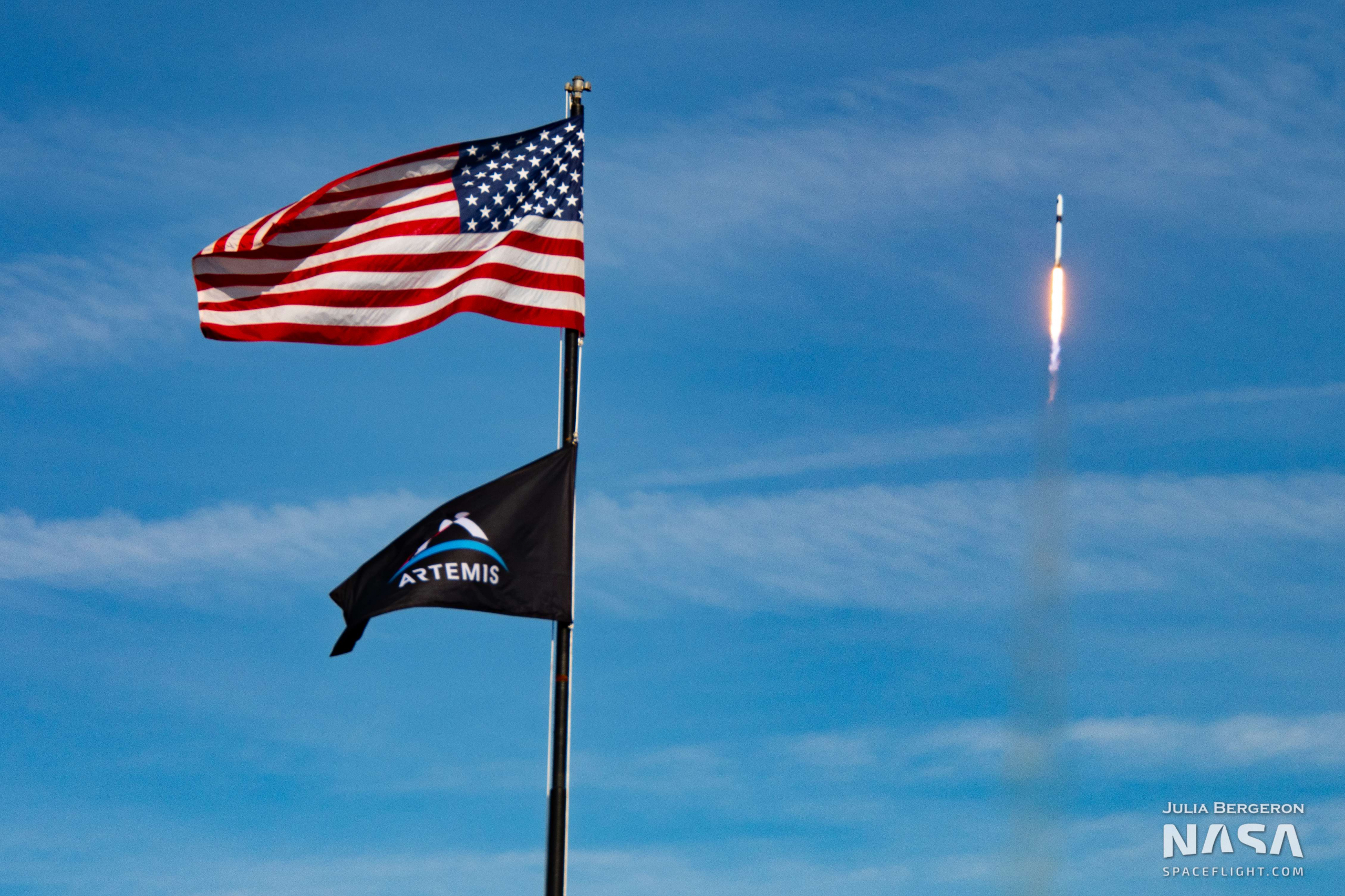 The Falcon 9 and Cargo Dragon pass by the American and Artemis flags at the Kennedy Space Center. Credit: Julia Bergeron for NSF

At the end of the first stage flight, the nine Merlin 1D engines shut down and the second stage separated. Following this, the single Merlin MVac engine on the second stage ignited as Dragon continued to ascend to orbit.

The first stage then conducted a flip maneuver using cold gas thrusters to flip the stage 180 degrees. Four grid fins on the booster then deployed.

As it headed into the denser part of the atmosphere, the grid fins on B1076 activated to steer the vehicle. Next, B1076 ignited its engine once again for the landing burn to land itself on Just Read the Instructions.

At about the same time, the single MVac engine on the second stage shut down, inserting Dragon into orbit. Soon after, Dragon separated and continued on its own on its way to the ISS.

(Lead image: Falcon 9 and Cargo Dragon in flight to the ISS on CRS-26. Credit: Stephen Marr for NSF)