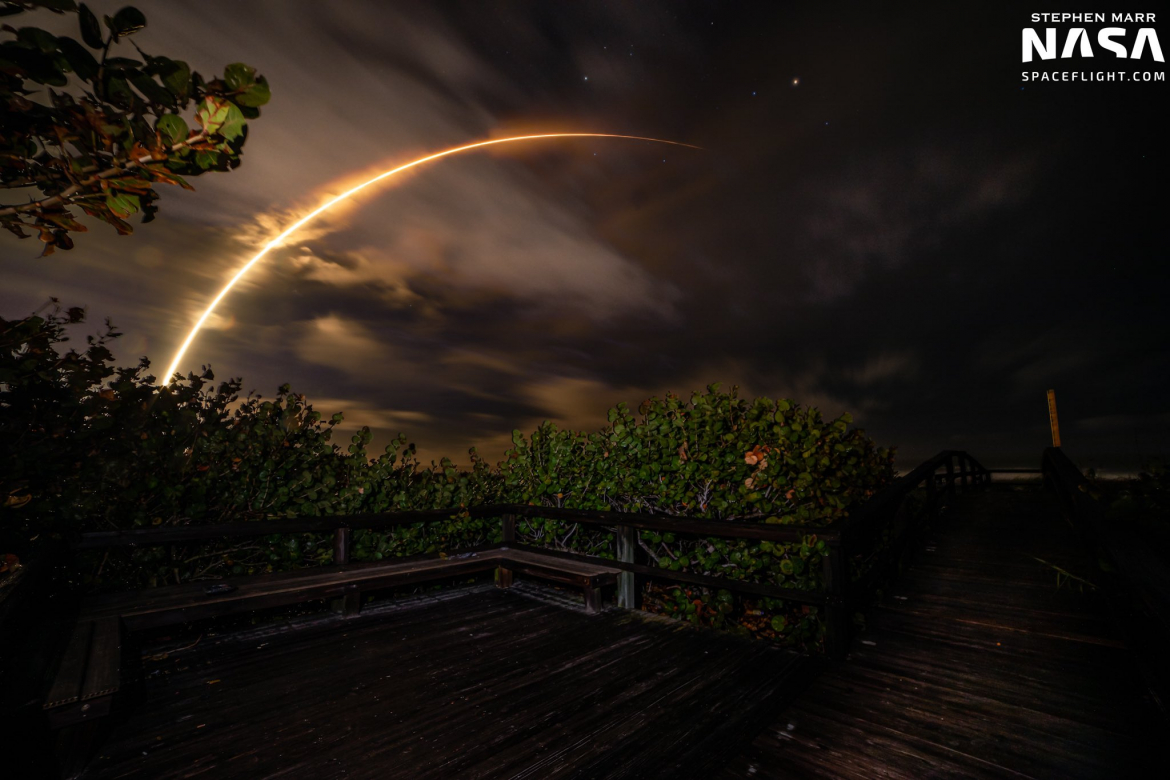 SpaceX has launched the Eutelsat-10B communication satellite into a supersynchronous geostationary transfer orbit. A Falcon 9 Block 5 rocket carrying the satellite lifted off from Space Launch Complex 40 at the Cape Canaveral Space Force Station in Florida on Tuesday, Nov. 22 at 9:57 PM EST (02:57 UTC on Nov. 23).

For an initial attempt on Monday, citing the thick cloud layer, cumulus cloud, and disturbed weather rules, the Space Launch Delta 45 released a launch mission execution forecast putting the probability of violation of weather constraints at 70%. Additionally, the forecast cited recovery weather as a moderate risk and solar activity and upper-level wind shear as a low risk.

This launch window was forgone “to allow for additional pre-flight checkouts.” Following the delay, SpaceX targeted the backup launch opportunity approximately 24 hours later, on Nov. 22, when the weather deteriorated to just 10% go for launch. However, weather ended up cooperating at T0, and Falcon 9 was able to lift off successfully.

In order for the vehicle to have the performance to place the satellite into its planned higher-energy orbit, the booster, B1049, was expended, splashing down in the Atlantic Ocean. This marks the third expended Falcon booster of this year, with SpaceX intentionally expending Falcon Heavy’s center core on the USSF-44 mission and the Falcon 9 booster B1051 during the Galaxy 31 & 32 launch.

The older Falcon 9 boosters – built before B1056 – feature a different interstage mounting mechanism from the newer boosters, which now consist of fewer pins. It is thought that the reduction of pins mounting the interstage reduces the amount of work needed to convert from a Falcon 9 to a Falcon Heavy side booster, and visa versa.

For this reason, coupled with SpaceX’s intentions to not convert B1053 to a Falcon 9, SpaceX only needed a single old interstage, explaining why B1051 didn’t also lose its interstage before its final mission. To replace the interstage donated to B1052, SpaceX installed a white interstage, left over from the pre-block-5 Falcon 9 v1.2 or “Full Thrust” design.

The oldest active booster in SpaceX’s fleet, B1049 was the fourth Falcon 9 Block 5 produced and has supported 10 previous missions. Following the launch, the Falcon 9 fleet remaining in service is 12 boosters strong.

Inside the Falcon 9’s 5.2-meter payload fairing lied the Eutelsat-10B spacecraft: a communication satellite built by Thales Alenia Space for Eutelsat Communications to provide maritime and in-flight connectivity. Eutelsat-10B is to replace Eutelsat-10A – which is due to reach its end of life in 2023 – in the 10-degree-East slot where it provides service to North and South America as well as Asia.

The satellite is based on the Spacebus Neo-200 bus; while the mass of the satellite has not been stated by Eutelsat, based on other spacecraft built on this satellite bus, it is estimated to be around 4,500 kg.

The satellite will carry two multi-beam high-throughput satellite (HTS) Ku-band payloads. The first will provide the North Atlantic corridor, Europe, the Mediterranean basin, and the Middle East with high throughput in areas with heavy air and sea traffic. The second payload will extend coverage across the Atlantic Ocean, Africa, and the Indian Ocean. Each of these HTS payloads will have roughly 35 gigabits per second of throughput.

At T-38 minutes before Falcon 9 is due to launch, the launch director verified that the vehicle was go for propellant loading. Pending all teams being go, three minutes later, at T-35 minutes, SpaceX begins loading cooled RP-1 onto both the first stage and the second stage, as well as superchilled liquid oxygen (LOX) onto the first stage.

At T-7 minutes, the Falcon 9 ran small amounts of liquid oxygen through the nine Merlin 1D engines on the first stage. This process, known as engine chill, is done to cool down the engines slowly so that they do not crack from thermal shock when superchilled LOX flows through them at engine ignition.

At T-1 minute, Falcon 9 entered startup. At this time the rocket is fully in charge of its countdown—all technical aborts from this point forward would be handled by the vehicle itself, and not the ground operators. The ground operators would only abort the countdown after this point in case of a weather or range violation.

Also at T-1 minute, Falcon 9 begins to pressurize its tanks for flight. The stage is kept at a higher pressure, protecting itself from forces of ascent. 45 seconds before launch the launch director verified that they were go for launch.

At T-3 seconds, the booster’s flight computer commands the ignition of the nine Merlin 1D engines. The engines on the first stage ignite in pairs to reduce startup transients and loads on the vehicle.

Once the vehicle’s onboard computer has ensured that all systems are nominal, it commanded the hydraulic clamps at the base of the vehicle to release, letting the Falcon 9 lift off from the pad.

Farwell B1049! The oldest booster in the fleet flew for a final time to deliver the Eutelsat-10B satellite to supersyncronous orbit. The weather cleared in time for Falcon to push through the clouds.

B1049 burned for approximately two minutes and 43 seconds before shutting down its first-stage engines — once again staggered to reduce loads on the vehicle. The vehicle then commanded a high-pressure helium circuit to release the latches connecting the first and second stages. Four pneumatic pushers—three radially around the interstage and one in the center of the interstage — push the stages apart. The second stage’s single vacuum-optimized Merlin ignites several seconds later.

At around three minutes and 36 seconds after launch, the vehicle commanded the latches connecting the fairing halves release. Shortly after, the fairing halves are pushed apart using four pneumatic pushers, stored in the active fairing half. The fairings use RCS to reorient themselves as they re-enter the Earth’s atmosphere, before deploying a parafoil to achieve a soft landing in the water. The fairing halves will be recovered by SpaceX’s fairing recovery vessel, Doug.

About eight minutes and five seconds after launch, the second stage shut down its Merlin Vacuum engine. The stage then coasted for about 18 minutes before igniting again for a further one minute and nine seconds. This second burn placed the stage in its planned supersynchronous transfer orbit. It is in this orbit that Eutelsat-10B was deployed from the second stage.