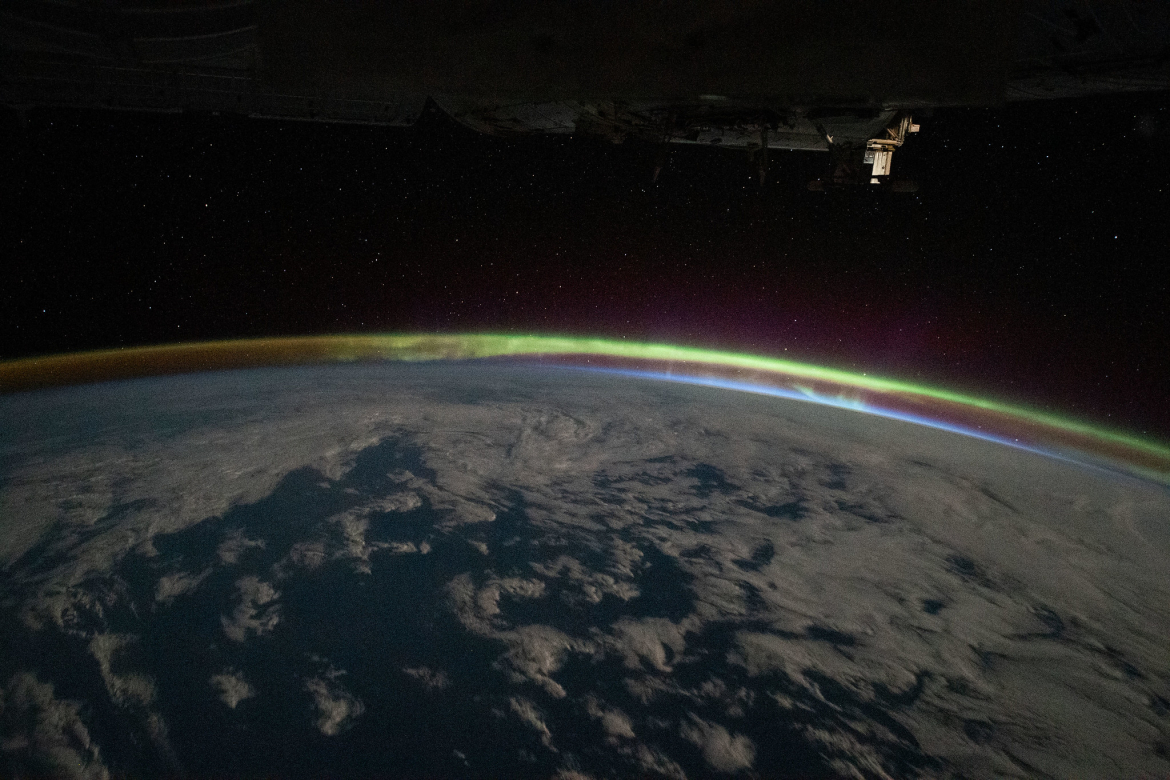 October 2022 was once again a busy month aboard the International Space Station (ISS). Several spacecraft movements completed the transition between Expedition 67 and 68 and saw new supplies delivered to the Russian Orbital Segment. Against this backdrop, the essential work of the station — furthering humanity’s understanding of science — has continued with the crew carrying out a varied array of research. 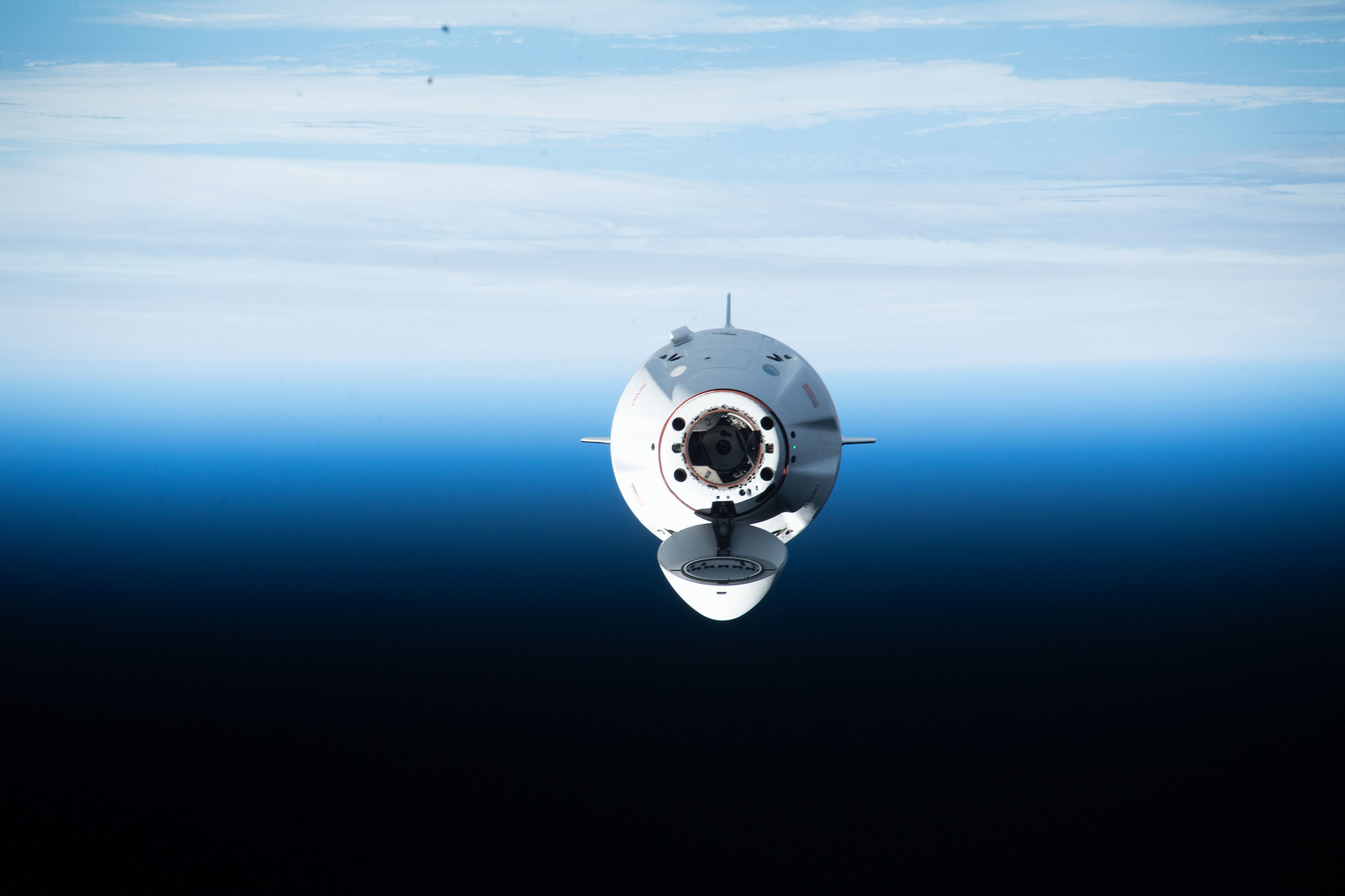 Endurance‘s arrival began an eight-day handover as the incoming crewmembers acclimatized to the space station and began to take over duties from those they were replacing. Mann, Cassada, and Kikina are all conducting their first space missions, while Expedition 68 marks Wakata’s third long-duration stay aboard the ISS and fifth spaceflight overall. Wakata first flew in 1996 aboard Space Shuttle Endeavour‘s STS-72 mission to recover the Space Flyer Unit. He visited the ISS during its construction as part of the STS-92 crew of Space Shuttle Discovery in October 2000, before a permanent human presence was established aboard the outpost.

Oct. 14 saw astronauts Kjell Lindgren, Robert Hines, Samantha Cristoforetti, and Jessica Watkins board Crew Dragon Freedom for their return to Earth, 41 hours later than planned due to weather conditions at its landing site. This departure completed the Crew-4 mission, with Dragon undocking from the IDA Zenith (IDA-Z) port on PMA-3, the Earth-opposed side of the Harmony module, at 16:05 UTC. Freedom splashed down in the Atlantic Ocean a few hours later. With Cristoforetti’s departure, command of the ISS passed to cosmonaut Sergey Prokopyev.

Toward the end of the month, a new Russian Progress supply ship arrived at the station. In preparation, on Oct. 23 Progress MS-19 undocked from the zenith port of the Poisk module, where it had been located since its arrival in February, before being deorbited to a destructive reentry over the Pacific Ocean. Progress MS-21 lifted off atop a Soyuz-2-1a rocket from the Baikonur Cosmodrome on Oct. 26, docking successfully at Poisk two days later. 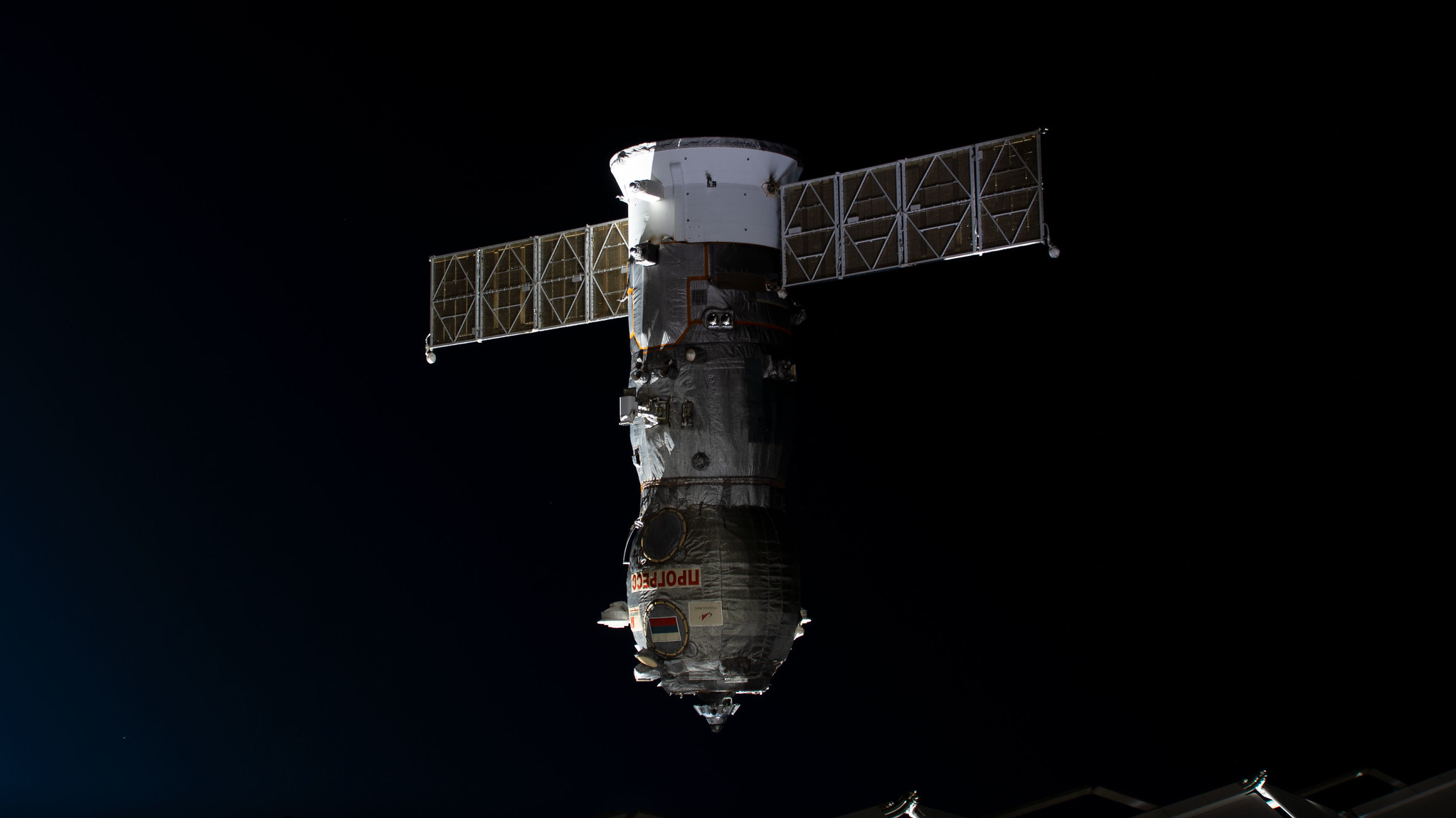 Progress MS-19 during undocking from the ISS (Credit: NASA)

Two other spacecraft remained docked with the station throughout the month. Soyuz MS-22 brought Prokopyev, along with fellow cosmonaut Dmitry Petelin and NASA’s Francisco Rubio, in September. Located at the nadir — or Earth-facing — port of the Rassvet module, it will serve as a lifeboat for its crew throughout their mission and their ride home at its conclusion.

Progress MS-20, another Russian cargo craft, has been docked at the aft port of the Zvezda service module since June. The spacecraft docked at this port is often used to make adjustments to the space station’s orbit, and MS-20 was called upon to make three such maneuvers during the course of the last month. The first was made on Oct. 1, with Progress firing its thrusters for 719.5 seconds to impart 1.36 meters per second of delta-v, raising the orbit of the ISS by approximately 2.4 kilometers.

Another reboost was conducted on Oct. 17, with this maneuver lasting 630.8 seconds for a total delta-v of 1.0 meters per second and an orbital altitude increase of 1.75 kilometers. The two planned reboost maneuvers were conducted ahead of the arrival of Progress MS-21, ensuring optimal conditions for the new Progress craft to dock following its two-day chase of the station.

Progress MS-20’s thrusters were also used for a predetermined debris avoidance maneuver (PDAM) on Oct. 25. This imparted 0.5 m/s of delta-v over the course of a 305-second burn, raising the orbit by 0.88 kilometers. PDAMs are performed when controllers identify debris in orbit that would potentially make a dangerously close pass to the station. By adjusting the orbit of the ISS well ahead of time, a PDAM ensures that such a conjunction cannot take place.

Aboard the station, the seven-member crew is responsible for the inspection and maintenance of onboard systems, as well as supporting, supervising, conducting, and participating in a wide range of scientific research projects. Their roles can vary from setting up experiments to be run from the ground to changing out samples and taking readings — or even serving as test subjects. 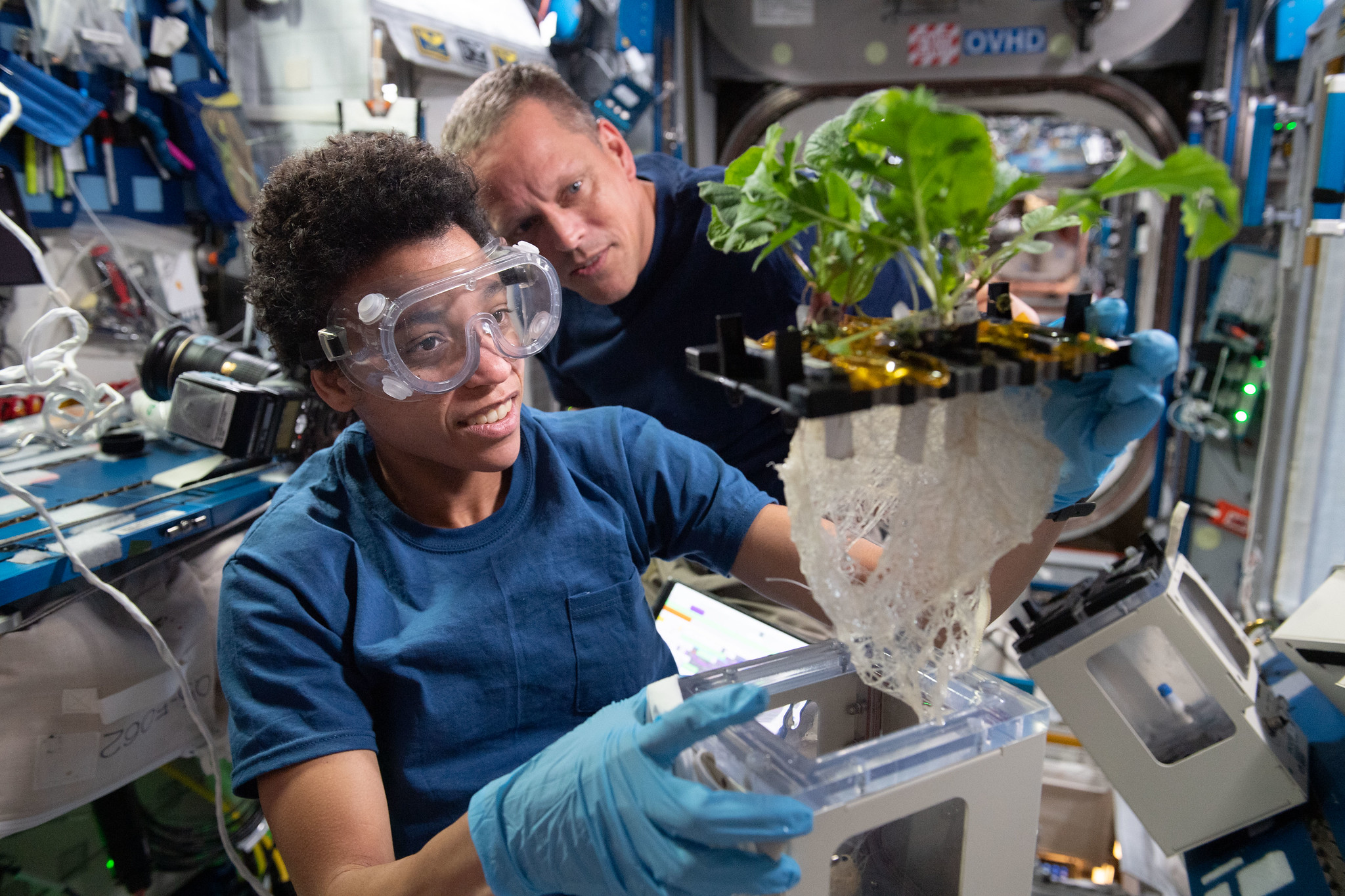 A major theme among the research carried out on the station is exploring human physiology and developing new technologies with a view to enabling future long-duration exploration missions. One technology that will be key to this type of mission is the ability for astronauts to grow plants for consumption, which the Exposed Root On-Orbit Test System (XROOTS) investigation aims to help with.

XROOTS is designed to test out aeroponic and hydroponic techniques, allowing plants to be grown without soil. The experiment uses the Vegetable Production System — or Veggie — plant growth system aboard the station, with individual experiment runs lasting between 10 and 60 days. The crew is responsible for refilling nutrients, recovering fluids, and inspecting and harvesting the plants. A growth phase was ongoing throughout October, with the experiment’s fourth harvest taking place on Oct. 31. The crops, including pea and tomato plants, were packaged to be returned to Earth.

What the crew eats is also the subject of scientific interest, with the Food Physiology experiment monitoring the astronauts’ diet and its impact on their immune system, gut microbiome, and nutrition to study how diet affects the crew’s adaptation to the space environment.

The crew’s adaptation to space is also being studied in the GRIP and GRASP experiments. GRIP studies how the astronauts’ ability to regulate grip force and upper limb movement is affected by their time in space. Sessions are conducted in either a seated or supine position, with an object — or manipulandum — being held and manipulated. These sessions are conducted at several points during an astronaut’s stay aboard the station, as well as on the ground before and after launch, with the results being compared. 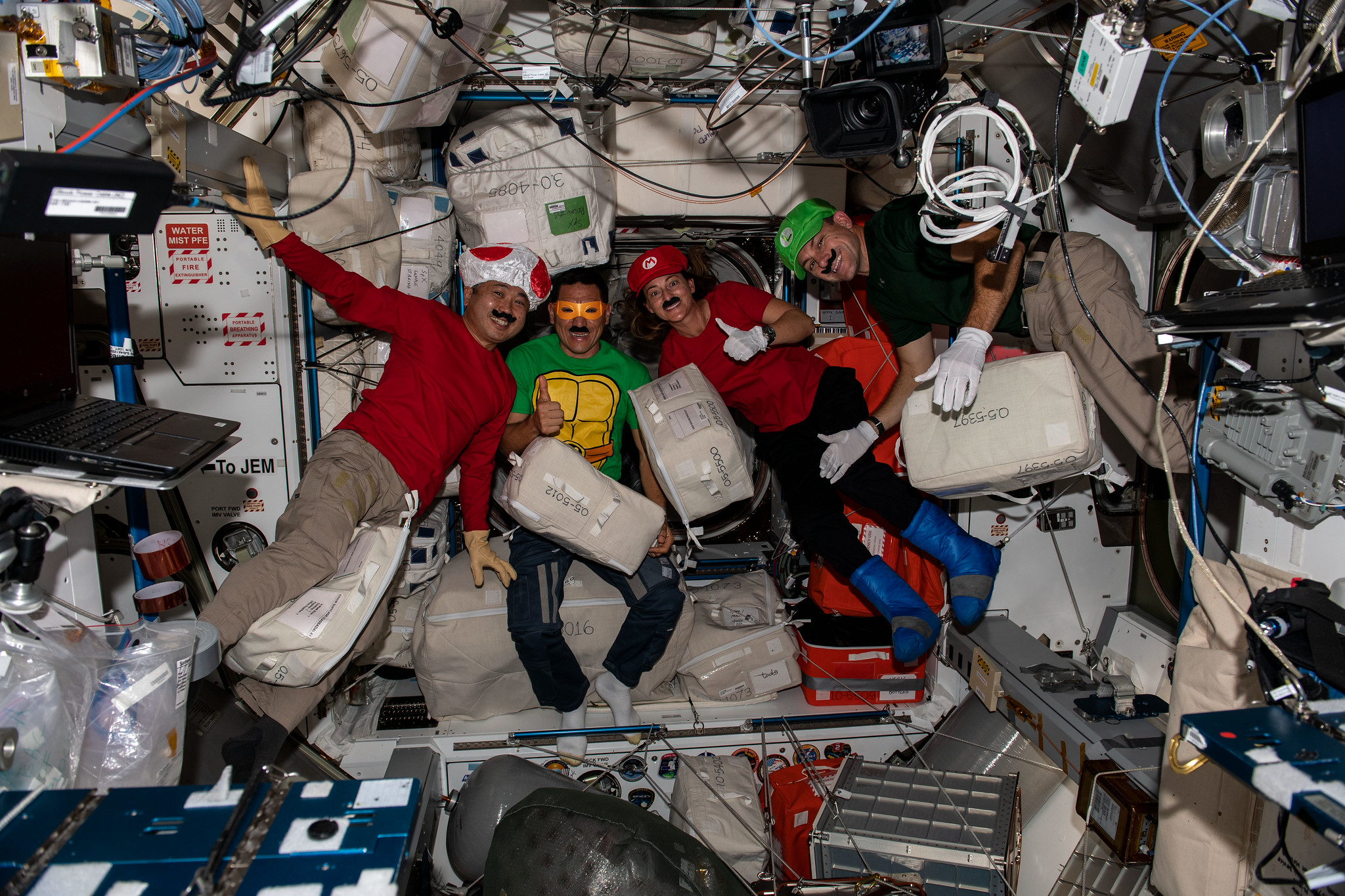 GRASP, or Gravitational References for Sensimotor Performance, studies hand-eye coordination and the effect that gravity — or a lack thereof — has on the subject’s ability to reach out and take hold of objects. During the experiment, the astronaut wears a virtual reality headset that projects an object for them to reach out toward, while a 3D tracking system records their movements.

Another experiment that will study how humans adapt to space is Rhodium Space Microbiome Isolates. This cultivates bacteria of types found in the digestive system of astronauts, to develop new “astronaut gut-on-a-chip” platforms to aid further research. By isolating and characterizing different species of bacteria, scientists hope to gain a better understanding of how spaceflight affects this microbiome and the resulting impacts on the health of astronauts. The crew installed samples in Space Automated Bioproduct Laboratory 2 (SABL-2) on Oct. 7 before transferring the science chamber to the Minus Eighty Degrees Celsius Laboratory Freezer on Oct. 11.

Advancing science is not the only way the ISS contributes to humanity’s future. The station is also used for educational outreach activities aimed at inspiring a new generation of scientists and engineers, as well as giving students hands-on experience with the space program.

The final round of the Kibo Robot Programming Challenge (Kibo-RPC or Robo-Pro) was held aboard the Japanese Experiment Module on Oct. 29. This was the third running of a competition that gives teams of students an opportunity to upload code to control the Astrobee and Internal Ball Camera (Int-Ball) free-flying robots aboard the ISS.

The teams were set a challenge based on a scenario where the space station had developed a leak following an impact with space debris, and were expected to use the robots on two targets within the module before reporting the results to the crew. Ten teams from around the world competed in the final event aboard the station, with a team named “KIBO la na tsu bu KIBO / Robology Awesome Aliens” from Taiwan declared the winner.

As the International Space Station enters its 22nd year of uninterrupted crewed operations, Expedition 68 is continuing work that will push the boundaries of science and enable future exploration far beyond low Earth orbit.

(Lead image: Earth and the aurora australis seen from the ISS on Oct. 4. Credit: NASA)