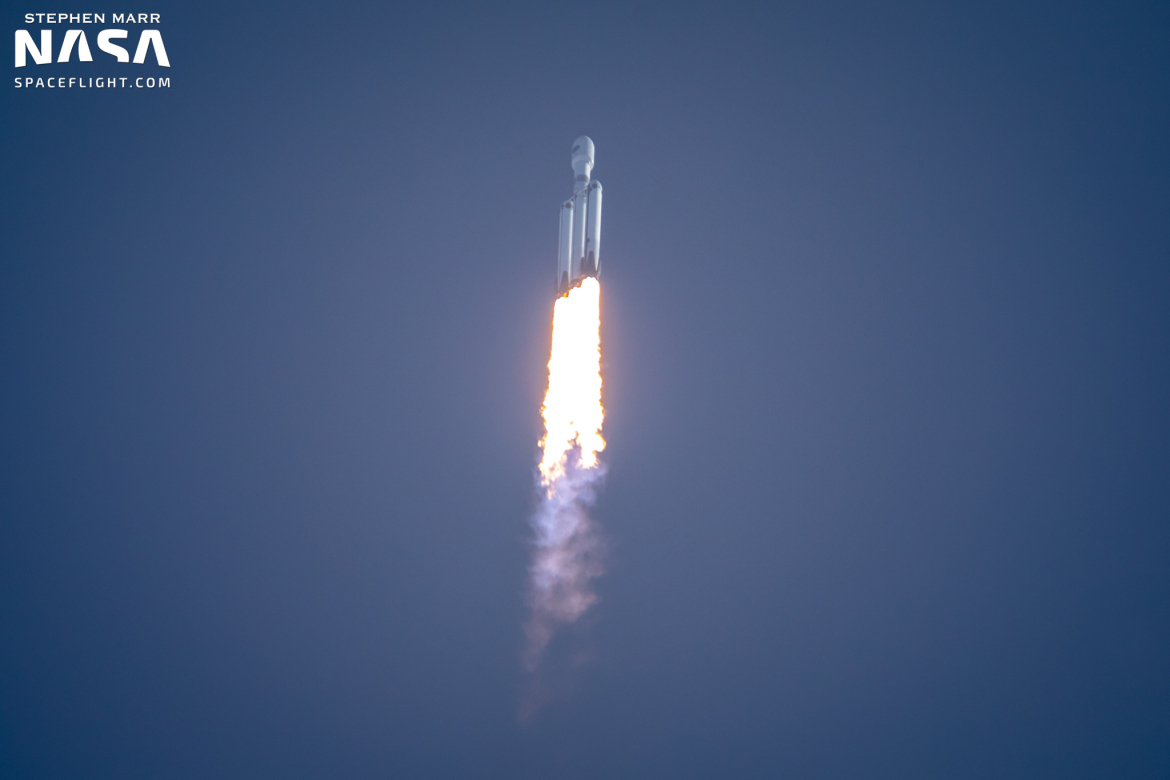 The world’s most powerful operational rocket, SpaceX’s Falcon Heavy, took to the Florida skies for the first time in over three years on Nov. 1 for the USSF-44 mission, a US Space Force contracted flight with a classified payload and at least one rideshare satellite.

Liftoff occurred right on time at 9:41 AM EDT (13:41 UTC) from Launch Complex 39A (LC-39A) at the Kennedy Space Center. Several hours later, the US Space Force confirmed the mission was a success.

On this mission, the Falcon Heavy rocket reached a new milestone on its fourth-ever flight. This was both Falcon Heavy’s and SpaceX’s first mission direct to geostationary orbit (GEO). To achieve this direct-to-GEO trajectory, the Falcon Heavy upper stagehad a multi-hour coast phase between the GTO and GEO insertion burns.

Traditionally, most missions, including Falcon 9 flights, send payloads destined for GEO into a geostationary transfer orbit (GTO). This allows the spacecraft to propel itself into its eventual final orbit in GEO more than 35,200 km (22,000 mi) above the Earth rather than the launch vehicle.

Onboard were at least two different spacecraft: TETRA-1 and a second unknown satellite. There was the possibility that there were additional classified payloads onboard, but exact details were not released before liftoff.

TETRA-1 was designed and built by Millennium Space Systems, a Boeing company. Completed in 2020, TETRA-1 is a microsatellite created for various prototype missions in and around GEO. TETRA-1 was the first prototype award under the US Space Force’s Space and Missile Systems Center’s Space Enterprise Consortium Other Transaction Authority (OTA) charter. The spacecraft is based on the ALTAIR-class small satellite product line. It is the first ALTAIR satellite to qualify for operations in GEO.

The mission, originally procured as AFSPC-44 for the US Air Force, cost approximately $150 million back in 2019 and was scheduled for liftoff no earlier than Q4 of 2020. However, the mission faced multiple delays as a result of what officials called “payload readiness” issues. The exact readiness problems were not publicly released. 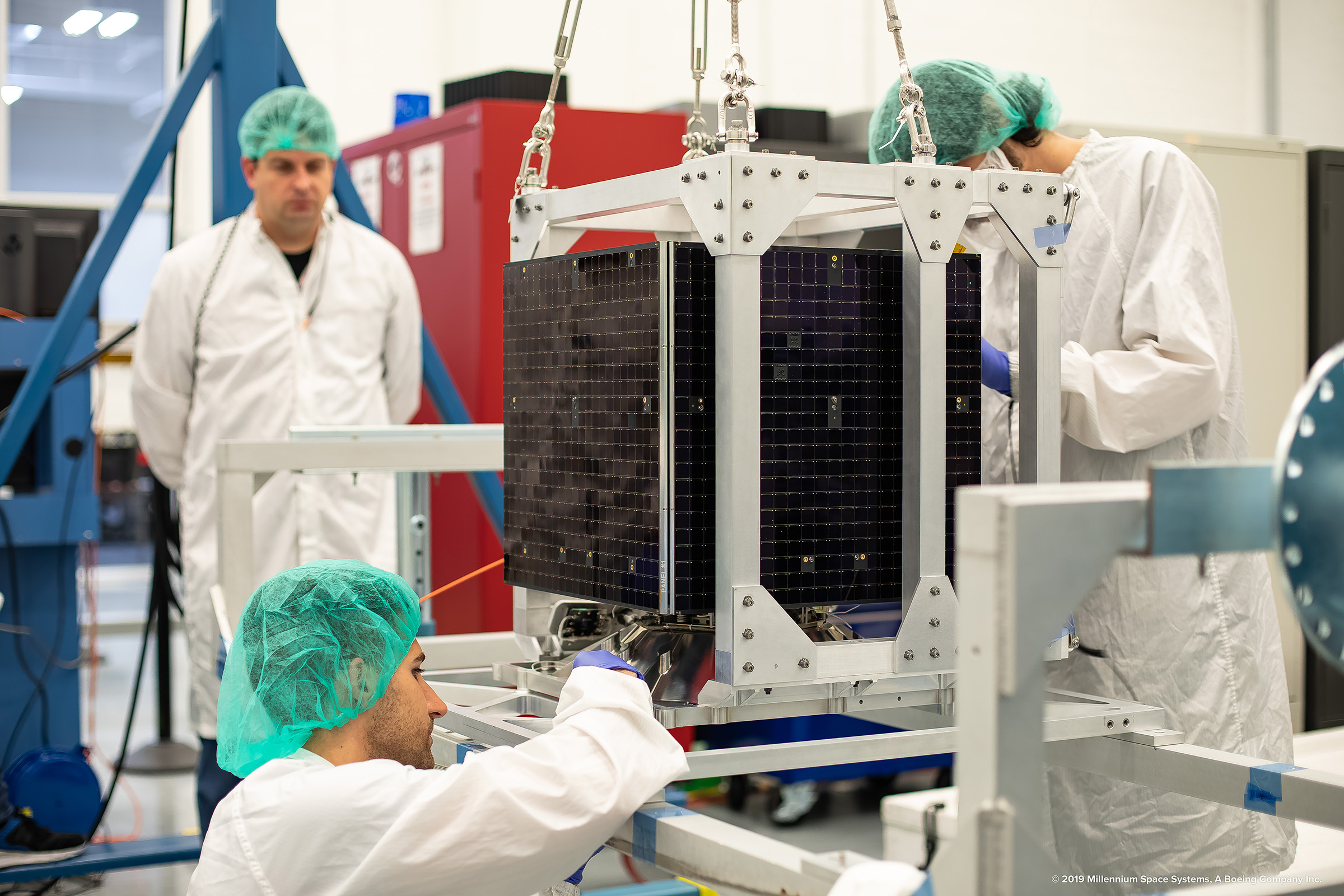 The TETRA-1 satellite under construction ahead of its flight on Falcon Heavy. (Credit: Millennium Space Systems)

This mission used three brand-new boosters. The side boosters, B1064 and B1065, landed at Landing Zones 1 and 2 (LZ-1 and LZ-2) at the Cape Canaveral Space Force Station. Back in 2021, officials initially announced these boosters would land on two barges floating downrange. However, it was changed recently to a return to launch site (RTLS) profile, resulting in near-simultaneous landings at LZ-1 and LZ-2.

As a result of the challenging launch profile, the new center core, B1066, was expended after completing its mission.

I heard a rocket launch today. A Falcon Heavy really did launch the USSF-44 mission and you can read all about it or check out the @NASASpaceflight livestream replay.https://t.co/vak4RsG7uChttps://t.co/80txPxBTZj pic.twitter.com/ijFBakJY2Q

At T-50 minutes, the first stage began to fill with RP-1, a refined form of kerosene. About five minutes later, first stage liquid oxygen (LOX) fill began. The first stage, including the core and side boosters, held approximately 287,000 kg of LOX and 123,000 kg of RP-1 when full.

At T-7 minutes until liftoff, the 27 Merlin 1D engines were chilled before ignition. Shortly before T-1 minute, Falcon Heavy’s onboard computers took over control of the count as the vehicle was “in startup,” followed shortly after by tanks reaching flight pressure.

Just before liftoff, the 27 engines on the side boosters and core began a staggered ignition process with the assistance of TEA/TEB. Once all engines reached full thrust, the vehicle checked its health. With all systems nominal, 5.1 million pounds of thrust propelled the vehicle away from LC-39A.

Less than a minute after launch, Falcon Heavy reached Max-Q, when the vehicle endured the maximum dynamic forces during the flight.

All 27 engines continued to burn until about two and a half minutes after liftoff, when both side boosters cut off, followed by separation seconds later. Those boosters then performed a maneuver to flip themselves around before conducting their second burn, called a boostback burn, which put B1064 and B1065 on course to return to LZ-1 and LZ-2.

About three and a half minutes into the flight, the center booster shut down its nine engines before separating from the second stage. Then, the Stage 2 Merlin Vacuum (MVac) engine ignited in a process known as second engine start one (SES-1). Shortly after, the payload fairing halves, which protected the USSF-44 payloads before the vehicle entered space, separated and fell back to Earth to be recovered.

Meanwhile, a little more than seven minutes after lifting off, the two side boosters began their entry burn as they once again encountered Earth’s atmosphere. That put them on track for one final burn for each side booster, known as the landing burn. This final relight slowed the vehicles down until each gently touched down at LZ-1 and LZ-2 seconds apart from each other, completing their mission approximately eight and a half minutes after first lifting off a few miles away.

These landings marked SpaceX’s 150th and 151st successful landings of Falcon 9 and Falcon Heavy boosters.
As this was happening, the second stage completed its first burn leading to second engine cutoff one (SECO-1). The next step involved a second relight, propelling the second stage and payloads to an apogee near geostationary altitude of 35,786 km (22,236 mi). 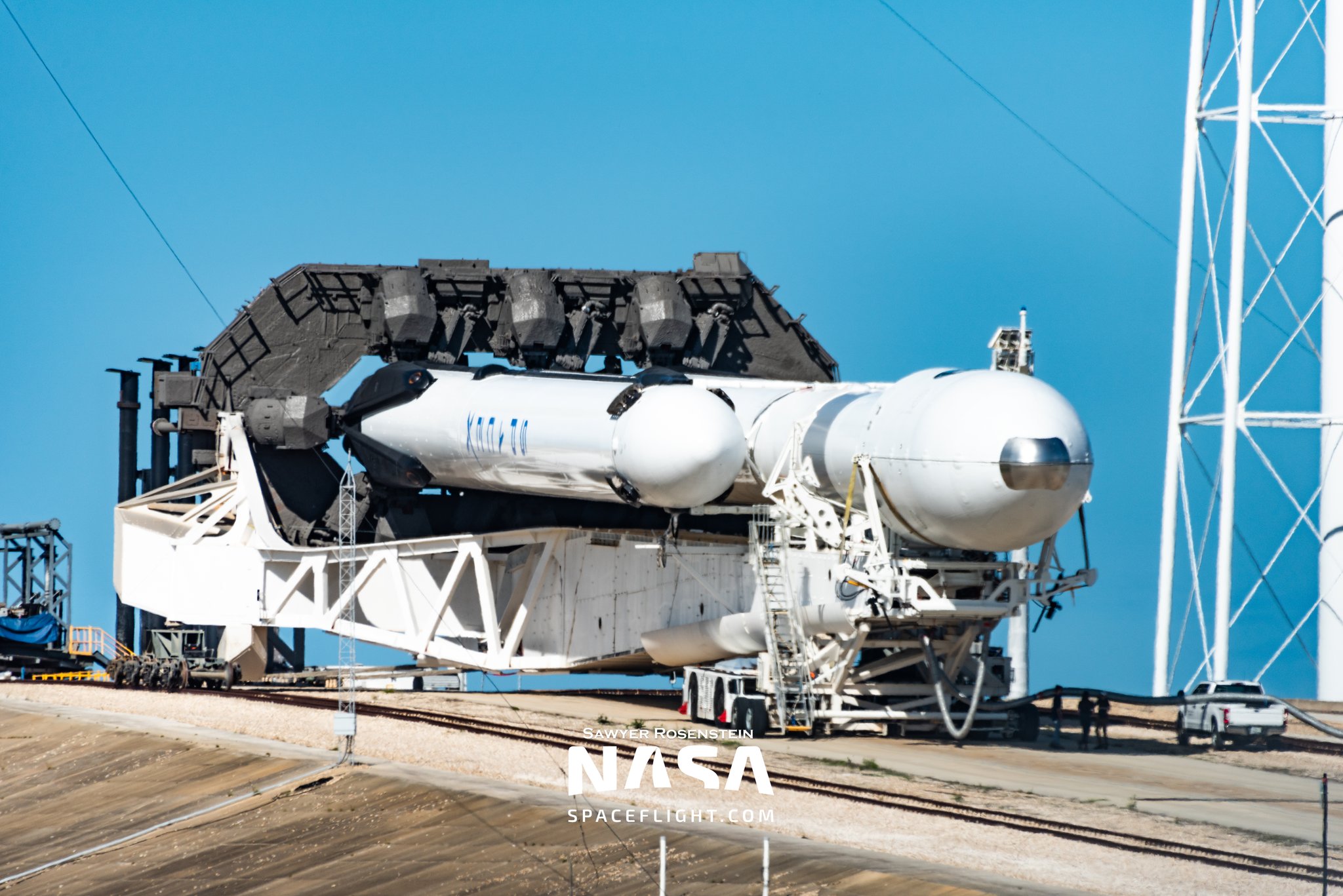 At this point, the vehicle entered an extended coast phase. A special gray paint layer on the second stage’s RP-1 tank, which was applied before launch, ensure that the RP-1 did not freeze during the vehicle’s long gap between burns.

Following the multi-hour coast phase, one final relight, SES-3, helped circularize the orbit before deploying the satellites. The second stage will enter a graveyard orbit away from the newly deployed satellites.

This mission was SpaceX’s 50th orbital launch this year, a record for the company, and the fourth Falcon Heavy launch ever. Despite the recent three-year gap, the Falcon Heavy launch manifest remains busy, including military, civil, and commercial launches scheduled throughout the coming years.