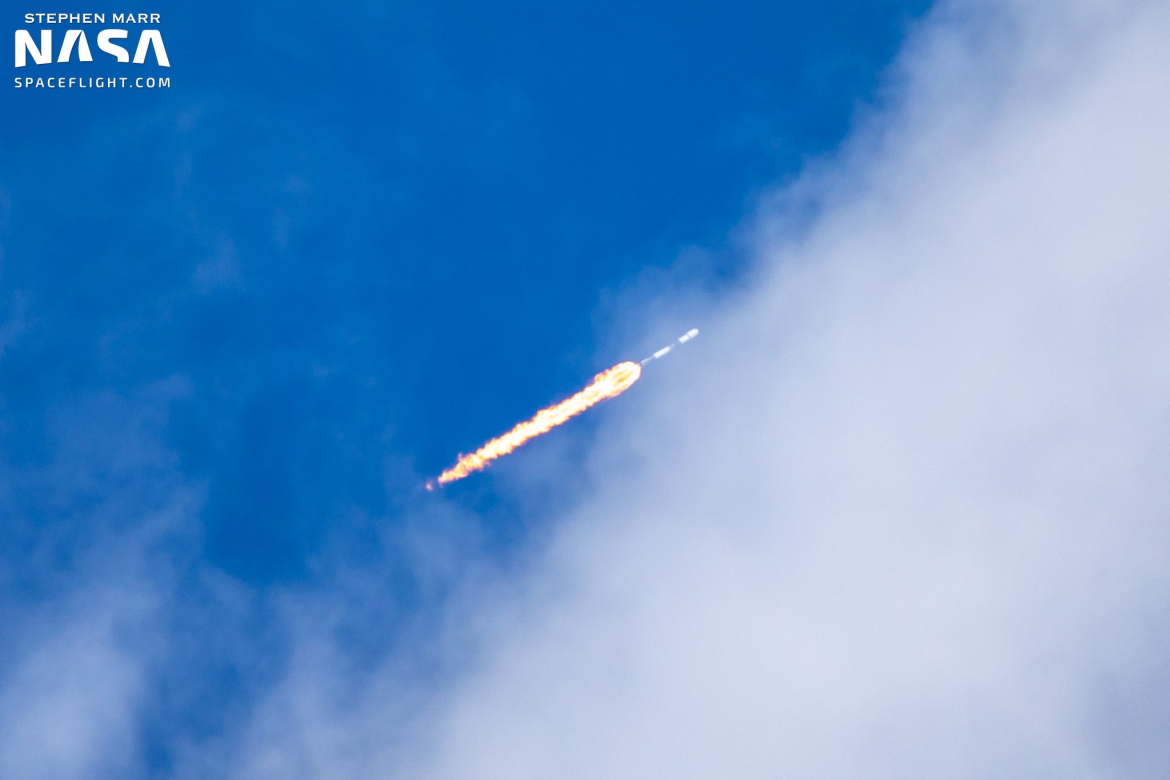 After a delay caused by Hurricane Nicole, SpaceX launched its 52nd mission of 2022 with the Intelsat Galaxy-31 & 32 satellites using a flight-proven Falcon 9 to a geostationary transfer orbit (GTO). Falcon 9 first-stage booster B1051-14 made its final flight on this mission.

With SpaceX recently completing its 51st launch of 2022, this year has marked many firsts for the company. To achieve these firsts, SpaceX has used flight-proven boosters to keep up with its busy cadence and prove reusability. One booster has continued to prove to SpaceX that boosters with high-flights work and can work as well as its younger siblings; B1051-14 will be making its last flight on this mission.

B1051 is one of the fleet leader of the Falcon 9 fleet, having previously supported 13 missions. The booster first supported the uncrewed SpaceX Demo-1 mission in March 2019, carrying the first Dragon 2 spacecraft to the ISS. A few months later, in June 2019, SpaceX moved B1051 to Vandenberg Space Force Base (VSFB) to support the RADARSAT Constellation mission after B1050 made an unexpected splashdown. 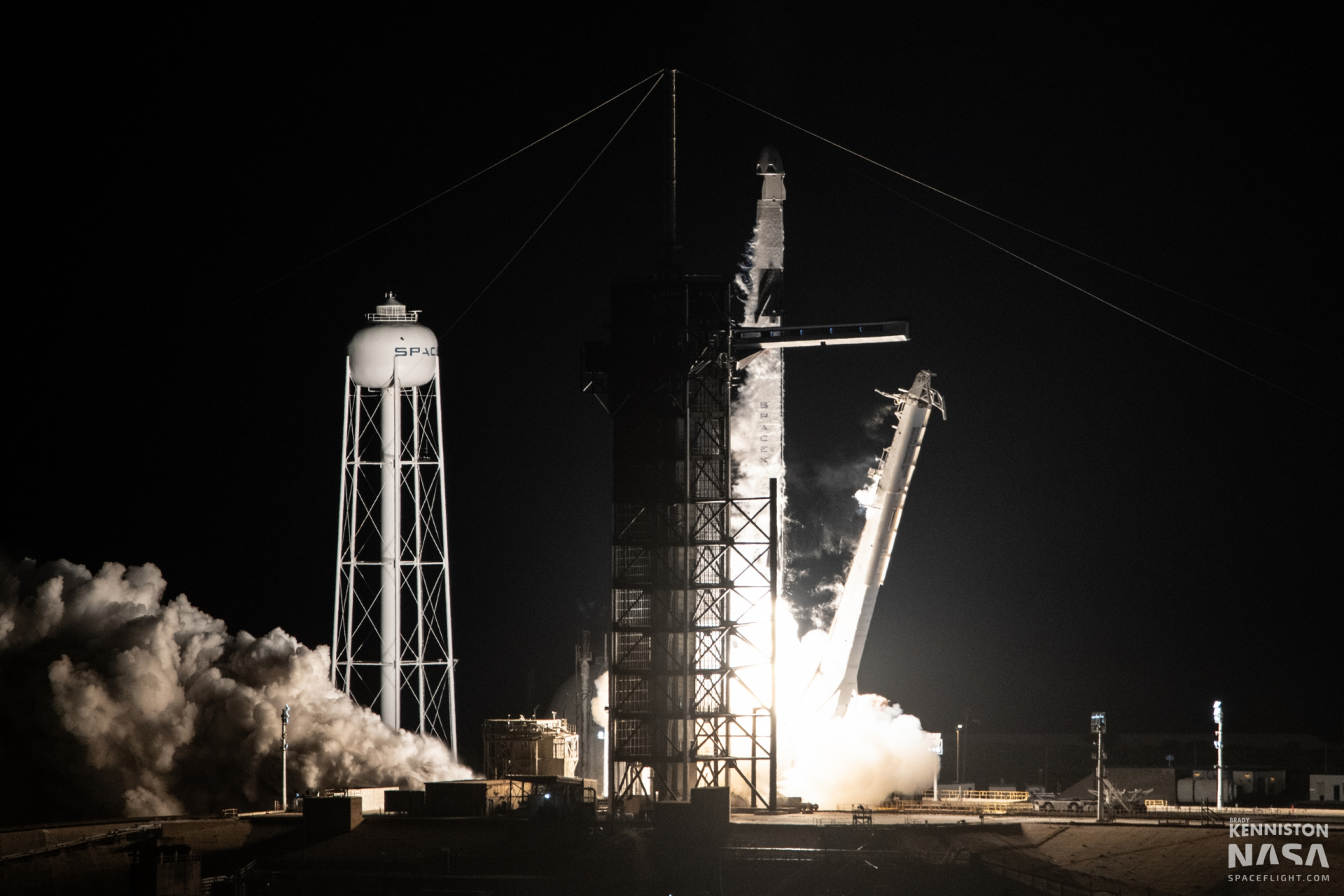 B1051 made its third flight on the Starlink v1.0 L3 mission from SLC-40 in January 2020. It became the third Falcon 9 booster to launch from all three launch sites. With SpaceX losing two first-stage boosters in the first quarter of 2020, the company was down to three active boosters (B1049, B1051, and B1059). B1051 made its fourth flight in April from LC-39A on the Starlink v1.0 L6 mission to return SpaceX to regular flights.

In August and October 2020, B1051 made its fifth and sixth flights on two Starlink missions. In December, B1051 marked a milestone in the Falcon 9 fleet supporting the commercial SiriusXM-7 mission on its seventh flight. This flight was the first time a booster with more than four flights supported a commercial mission and the first booster to support five missions in a single year.

In March 2020, older booster B1049 became the fleet leader, becoming the first booster to launch and land five, six, and seven times. At the beginning of 2021, B1051 took over as fleet leader during the Starlink v1.0 L16 mission. This flight had many milestones, including the first eighth flight of a booster, the fastest turnaround at 38 days, and the first flight of a new booster milestone not preceded by a static fire test. It supported the first ninth flight of a booster two months later on Starlink v1.0 L21.

Two months later, B1051 made history again, becoming the first Falcon 9 to reach ten flights on Starlink v1.0 L27. As the first booster to reach this milestone, it proved a Falcon 9 could support 10+ flights without significant refurbishment. After completing this flight, B1051 underwent major inspections and moved to VSFB. In December 2021, B1051 supported the first 11th flight of a Falcon 9 on Starlink Group 4-4 from VSFB. Following the flight, SpaceX transported B1051 back to CCSFS for the final time. 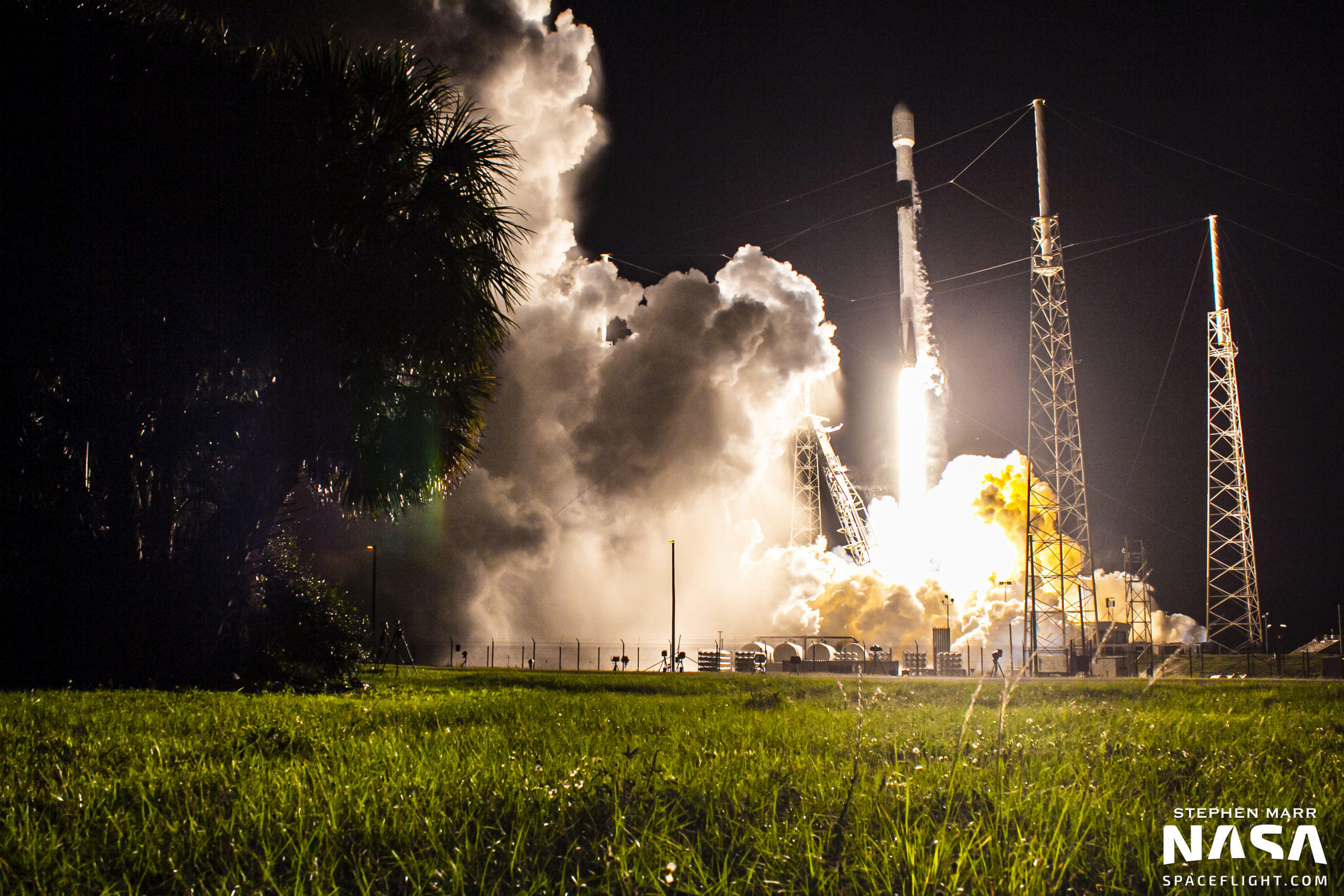 A month after B1060 became the fleet leader, B1051 supported its 13th flight on Starlink Group 4-22. After supporting 4-22, SpaceX took B1051 off the SpaceX drone ship Just Read the Instructions (JRTI) at Port Canaveral and moved it to HangarX to prepare for its final flight. B1051 had its recovery hardware removed and a second stage installed for its next flight. The booster will have a turnaround of 118 days.

B1051-14 was seen earlier today on @NASASpaceflight's Space Coast Live stream (see blue square, orange rocket was the star of the day today😅) headed to SLC-40 for its 14th and final launch. The booster will be expended on the Galaxy 31&32 mission.https://t.co/bWDuxt2jVs pic.twitter.com/OYkvEkbtG2

SpaceX transported B1051 to the Horizontal Integration Facility (HIF) at SLC-40 on Nov. 4. At the HIF, B1051 was integrated on the Strongback Transporter/Erector (T/E), and the encapsulated payloads were attached shortly after. The SpaceX teams rolled out the Falcon 9 to SLC-40 for launch and raised the rocket vertical on Nov. 11.

Galaxy-31 & 32 are two near-identical satellites owned and operated by the commercial satellite operator Intelsat. The company was founded in 1964 as the International Telecommunications Satellite Organization, or Intelsat, to own and manage international broadcasting services with multiple participating countries. Intelsat launched its first satellite in 1965, Intelsat I (Early Bird), as the world’s first commercial communication satellite.

During the launch of Intelsat-6 3 (Intelsat 603), the Commercial Titan III solid motor kick stage failed to separate from the second stage, leaving the satellite in a useless low Earth orbit (LEO). Intelsat would task NASA to boost the satellite to a GTO. NASA completed the mission using Space Shuttle Endeavour on its first flight during STS-49. Intelsat 603 completed 23 years in orbit before it was retired. 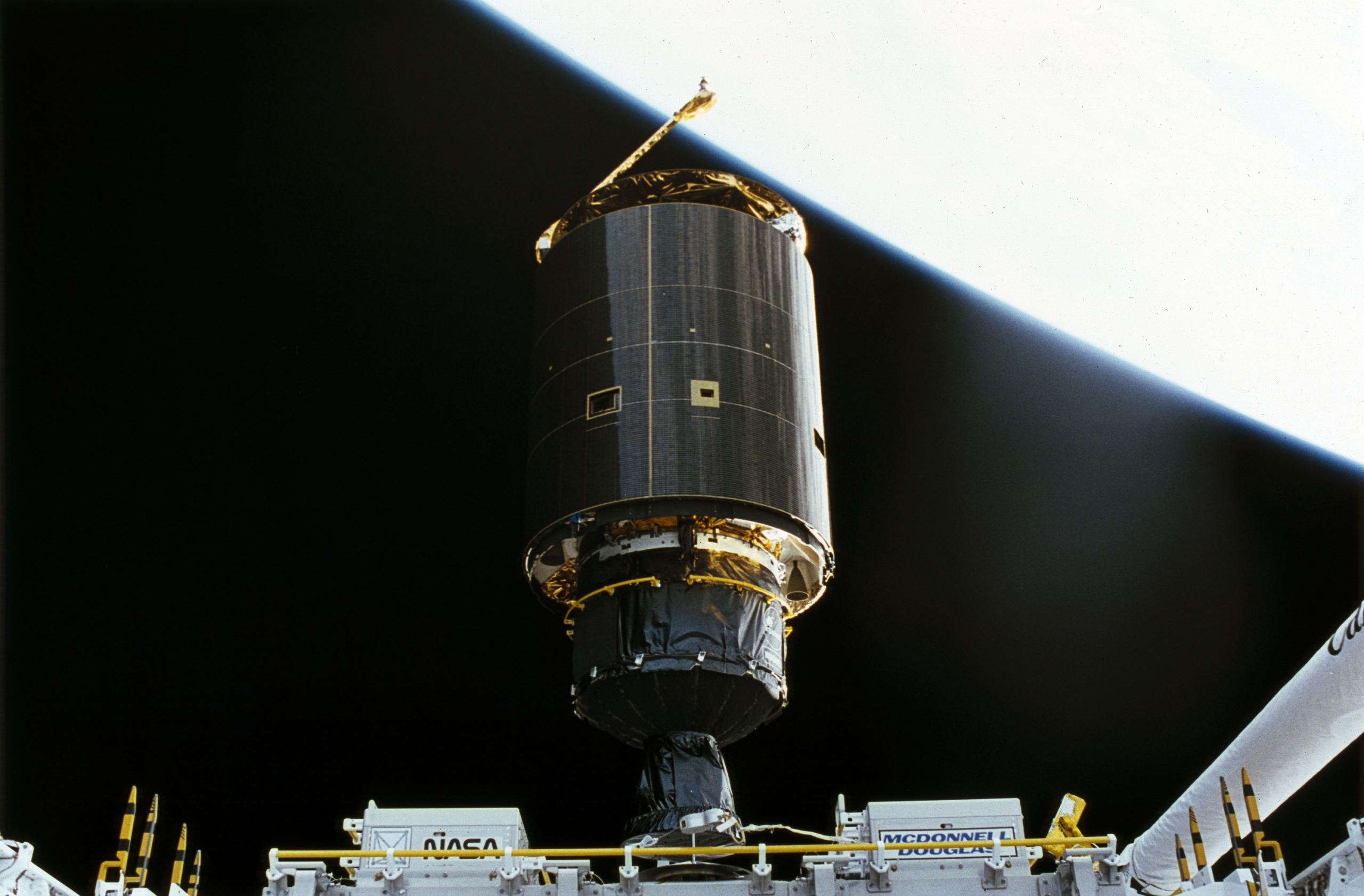 Since then, Intelsat has continued to launch satellites to expand its global coverage. Recently, Intelsat scored a historic first with Northrop Grumman’s Mission Extension Vehicle (MEV)-1 and the 19-year-old Intelsat 901 satellite. After lasting six years longer than its 13-year lifespan, Intelsat moved the Intelsat 901 orbit into a graveyard orbit, with Intelsat-37e taking its place. The MEV-1 launched in October 2019 to rendezvous with the 901 satellite.

MEV-1 docked with Intelsat 901 on Feb. 25, 2020, becoming the first time two commercial satellites docked and mission extension services were offered to a geostationary satellite. MEV-1 moved the satellites to replace the aging Intelsat 907 satellite for five years. A second MEV docked with the Intelsat 10-01 satellite in 2021. 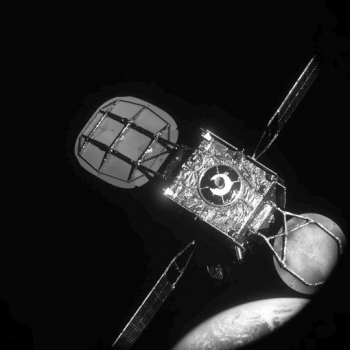 MEV-1 20-meters away from Intelsat 901 before docking. (Credit: Northrop Grumman)

On Nov. 7, 2022, Intelsat announced an order for the Intelsat-45 satellite from SWISSto12. Intelsat will be the first commercial satellite operator to use the SWISSto12 HummingSat satellite bus. SWISSto12, under a partnership with ESA, will use HummingSat to create a satellite just a tenth of the size of conventional satellites to launch as a rideshare payload with satellites going to GEO. Intelsat-45 will provide Ku-band satellite services with a launch in 2025.

Along with satellite operator SES, Intelsat has been launching satellites to clear the 300-400 MHz C-band spectrum above the United States per the FCC’s plan to roll out 5G services. As a part of Intelsat’s plan to clear that spectrum, the company ordered seven satellites from manufacturers Maxar and Northrop Grumman. Intelsat ordered six satellites, four from Maxar and two from Northrop Grumman, in 2020. The company ordered a seventh satellite from Maxar a few months later. Maxar has built nearly 60 satellites for Intelsat since the 1970s.

Intelsat selected SpaceX to launch five of the seven satellites. For this mission, Intelsat requested Galaxy 31 & 32 to be launched to a higher transfer orbit, requiring an expendable mission. Falcon 9 (B1037) supported its first Intelsat launch in 2017 in an expendable configuration on the Intelsat-35e mission. Galaxy 31 & 32 will be the third overall launch for Intelsat by SpaceX and its second expandable launch for Intelsat.

Galaxy-31 & 32 launched in a dual-stacked configuration, allowing the two satellites to launch simultaneously. Recently, SES-20 & 21 launched using an Atlas V 531 in a similar configuration as Galaxy-31 & 32. SES is also clearing out the same C-band spectrum for the FCC.

This launch continues Intelsat’s Galaxy fleet refresh plan. G-31 and G-32 are third and fourth in a total of seven new Galaxy satellites launching in the next six months. This launch follows G-33 and G-34 launched last month. pic.twitter.com/rwXLeZGCNf

Maxar delivered the satellites to CCSFS in October 2022. SpaceX encapsulated the two satellites in Falcon 9’s 5.2-meter payload fairing and moved them to the HIF for integration.

RP-1 loading on the second stage was completed just before 20 minutes before launch. LOX loading began on stage two four minutes later. At T-7 minutes, the Falcon 9 first stage chilled its engines with liquid oxygen to ensure there were no thermal shocks to the engines at ignition. The T/E retracted to the launch position of 88.2 degrees at T-4 minutes and 30 seconds.

Propellant loading was complete at T-2 minutes. Two significant events then occurred simultaneously a minute later: the flight computers entered “startup,” and the propellant tanks began to pressurize to flight levels. The launch director gave the final “go” for launch 45 seconds before liftoff.

At T-3 seconds, the nine first-stage engines were commanded to ignite. A second later, the engines ignited and began a final health check. Once the engines were verified healthy and producing full thrust, the hydraulic hold-down clamps and the T/E retracted, allowing liftoff. 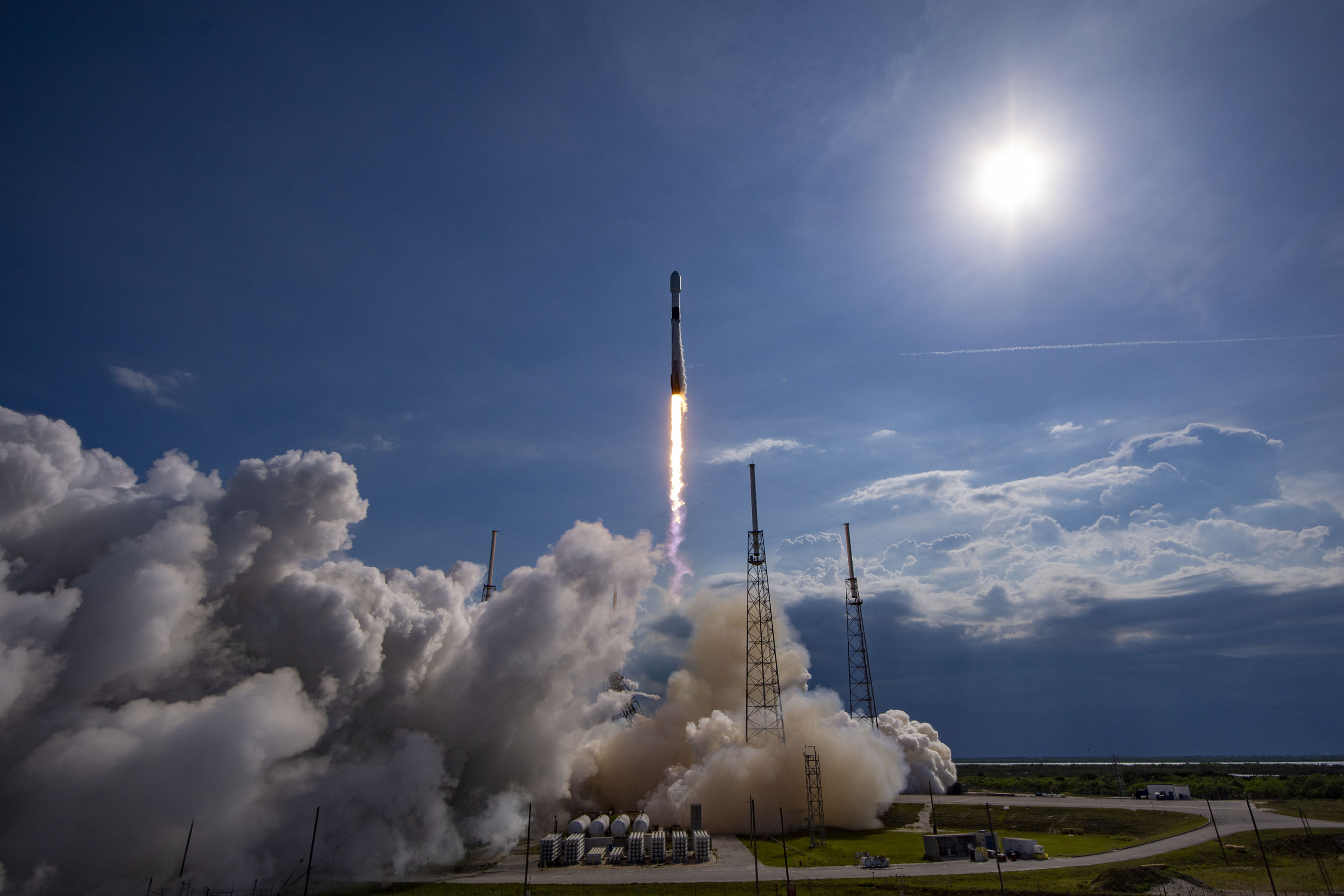 Shortly after liftoff, Falcon 9 began a pitch maneuver due east to follow its proper flight profile. One minute and 12 seconds into the flight, Falcon 9 passeed Max-Q.

Once propellant levels were depleted, B1051 shut down its nine first-stage engines around two minutes and 43 seconds into the flight. Three seconds later, the second stage separated, and its single Merlin Vacuum (MVac) ignited for Second Engine Start (SES)-1. B1051 then safed its flight termination system ahead of a destructive plunge back into the atmosphere, ending its nearly four-year life.

With the vehicle outside the densest part of the Earth’s atmosphere, Falcon 9’s payload fairing separate three minutes and 32 seconds into the flight.

After reaching a low Earth parking orbit, the second-stage engine shut down just eight minutes into the flight. After an ~18-minute coast in orbit, SES-2 took place for its second and last burn. This 70-second burn placed the vehicle into a GTO. Once the burn was complete, Falcon 9 coasted for five minutes before releasing Galaxy-32. Another five-minute coast then took place before Galaxy-31 was released.

In late November, SpaceX will launch its first of three batches of OneWeb satellites. Finally, a Starlink mission is expected sometime in November.

Next year, SpaceX will launch two Intelsat satellites. One is the Galaxy-37 satellite, and the other is Intelsat-40e/TEMPO. Intelsat-40e is a part of the Intelsat Epic satellite series with a hosted NASA payload called Tropospheric Emissions: Monitoring of Pollution (TEMPO) instrument to study pollution above the United States.