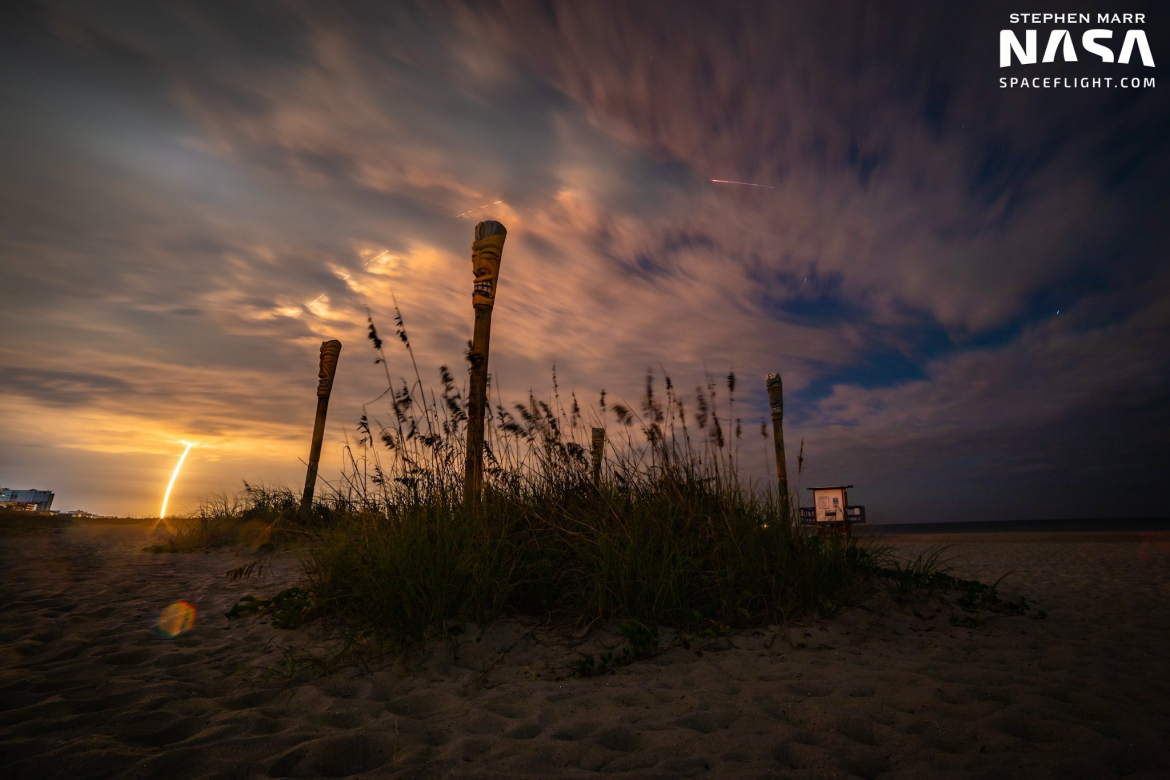 The Eutelsat II began launching two years later, with its final successful launch in 1992. Eutelsat converted the sixth satellite in the Eutelsat II fleet into the first Hotbird satellite. Hotbird was modified to conduct direct-to-home (DTH) broadcasting when compared to the other Eutelsat satellites. 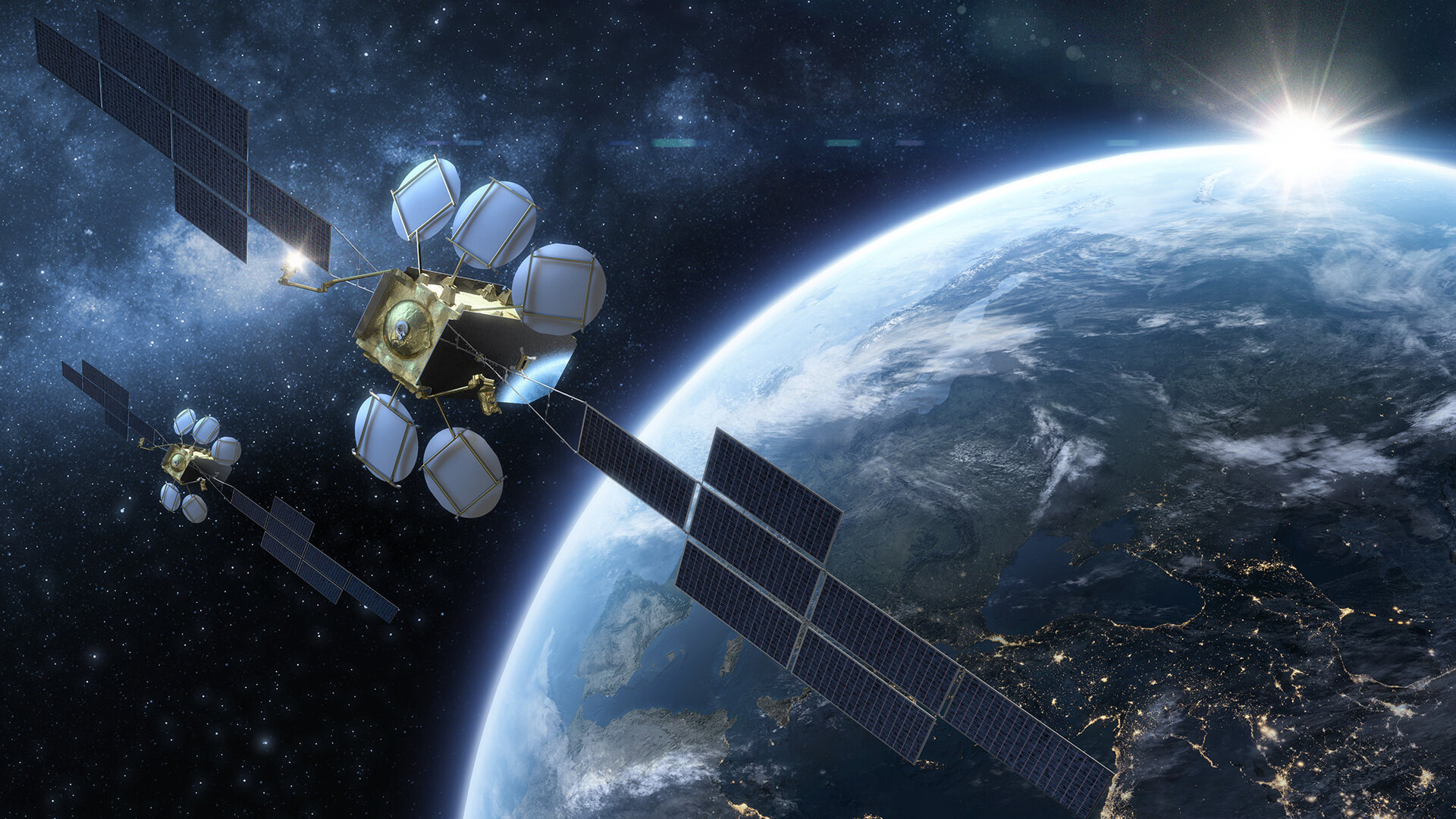 Hotbird-13G is the second in a series of three missions contracted with SpaceX, including Hotbird-13F, 13G, and Eutelsat-10B. These satellites were set to launch on the Ariane 5 and Ariane 6 launch vehicles in 2021 and 2022. However, with Ariane 6’s maiden flight now NET Q4 2023, this caused Eutelsat to move the satellites to Falcon 9 for launch. ESA also made this move with the Hera and Euclid missions, both of which were set to launch on Ariane 6 or Soyuz rockets.

As a leading satellite operator, Eutelsat marked many firsts with some of its satellites in the past few years. The Eutelsat W3A satellite was the first to use the Airbus Eurostar-3000 series, a highly-reliable satellite bus used by multiple providers and future Eutelsat satellites. In partnership with ESA and Airbus, the Eutelsat Quantum satellite is an experimental satellite with a reconfigurable software payload. This satellite will test how a satellite can change its capabilities while in orbit with only software.

Eutelsat’s first launch in 2022 was the Konnect VHTS satellite, using the newly introduced Spacebus-NEO with the most powerful onboard digital processor in orbit. The most recent launch for the company was the Hotbird-13F satellite on a flight-proven Falcon 9 (B1069-3) on Oct. 15.

Hotbird-13F and 13G are two nearly identical satellites built by Airbus using the brand-new all-electric Eurostar-NEO satellite bus. Eutelsat ordered the two satellites in late 2018 as the first customer of the Eurostar-NEO bus. The bus originated from the Eurostar-3000 Electric Orbit Raising (EOR) as a more evolved version. 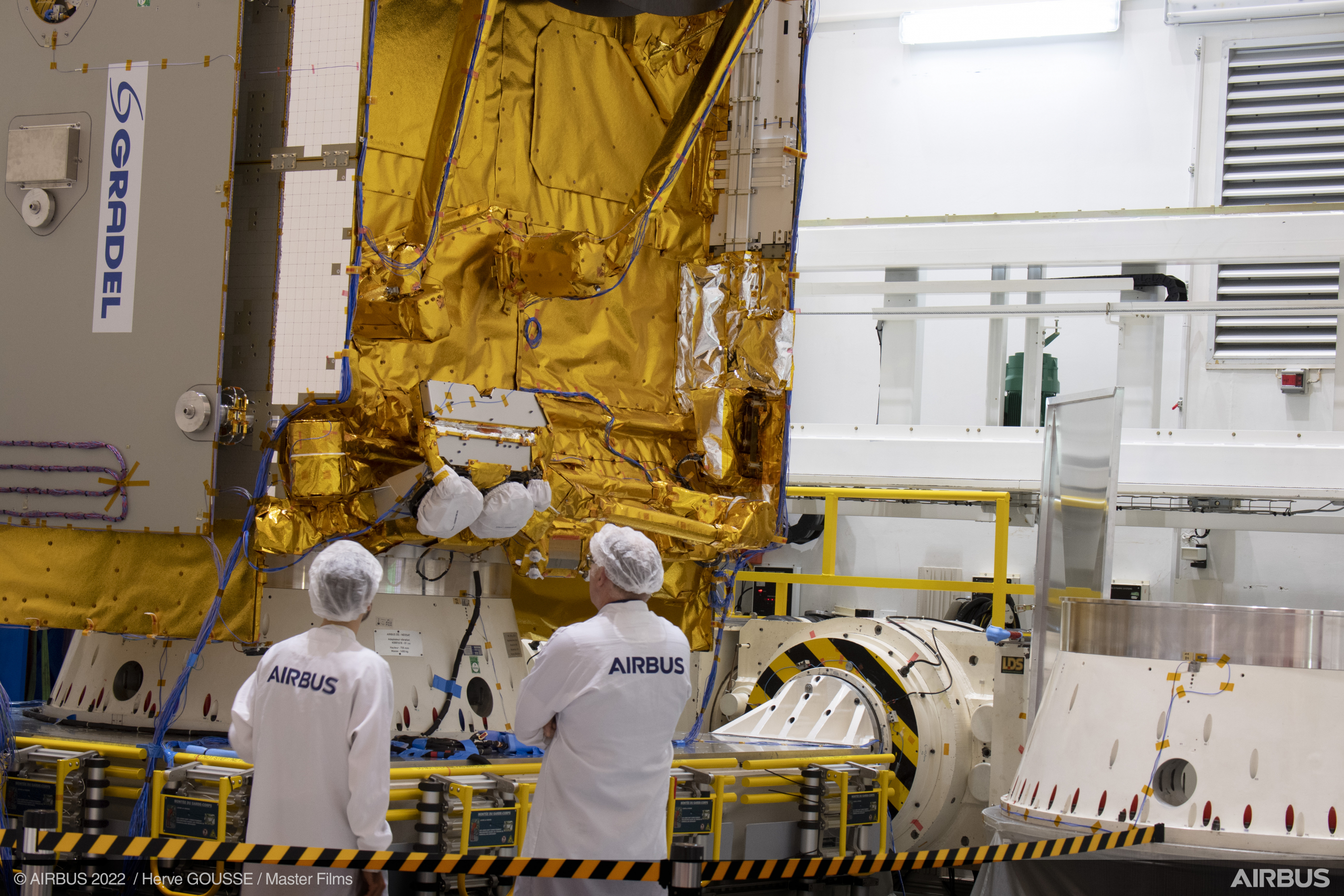 A recent move in the industry is to use all-electric satellite buses to remove the standard propulsion module to cut the mass of any satellite. This mass reduction allows customers to use heavier, more powerful payloads while maintaining a lower overall mass. While allowing for larger payloads, this has the downside of much longer orbital raising from GTO to GEO.

Eutelsat will use the larger payloads to its advantage by using Hotbird-13F and 13G to replace the Hotbird-8, 9, and 10 satellites in the 13-degree east orbital position. The two metric-ton payloads will have the same power with more resistance to jamming as the original three satellites while only using two.

The two satellites have a mass of 4,500 kg with 80-Ku band transponders. Hotbird-13G also houses an L-band for the European GNSS Agency (GSA) as EGNOS GEO-4. EGNOS GEO-4 will improve global positioning systems for the global navigation satellite system (GNSS). To power the spacecraft, twin solar arrays will generate 22 kW of power.

Airbus completed Hotbird-13F and 13G in early 2022. After a few months of testing, 13F was the first to be shipped in September 2022 for its October 2022 launch. A few hours after 13F’s launch, an Airbus BelugaST delivered 13G to CCSFS. At CCSFS, Hotbird-13G underwent its final testing and was integrated onto the payload adapter of the Falcon 9. The satellite was encapsulated in Falcon 9’s 5.2-meter diameter payload fairing.

2022 has been a record-shattering year regarding launches and reusability milestones for SpaceX. On Monday, SpaceX launched its 50th rocket of the year, a Falcon Heavy carrying the USSF-44 mission. Hotbird-13G’s mission marks the 50th launch of a Falcon 9 in a single calendar year, continuing to break the Soyuz-U’s record with 47 launches in 1979.

A large part of SpaceX’s ability to launch quickly is reusing many components of the Falcon 9. On this flight, flight-proven booster B1067 supported its seventh mission. B1067 previously supported SpaceX CRS-22, Crew-3, Turksat-5B, Crew-4, CRS-25, and Starlink Group 4-34. This time, B1067 had a turnaround time of 46 days.

After supporting 4-34, B1067 landed on the SpaceX drone ship Just Read the Instructions (JRTI) and was brought back to Port Canaveral on Sept. 23. It was offloaded the same day and placed horizontally on Sept. 27. B1067 was moved to SpaceX’s HangerX facility at Robert Roads for refurbishments. On Oct. 21, B1067 was spotted on the move for final refurbishment without grid fins or a second stage.

B1067 rolling out at KSC. Notice lack of grid fins and no second stage attached so don't expect this one to launch just yet, gonna need a bit more work to get ready for flight. It's likely for one of the launches next month. https://t.co/7y9NWgpAVY

With refurbishments complete, B1067 and its second stage were transported to the Horizontal Integration Facility (HIF) at SLC-40 for final assembly. Along with its payload, the duo was placed on the Transporter/Erector (T/E). For launch, Falcon 9 and the T/E rolled out to the pad and was raised vertically.

Final launch preparations begin 38 minutes before launch with an electronic Go/No-Go poll for propellant loading. When the “go” for launch is given, launch control starts the auto-launch sequence allowing RP-1 loading on both stages and LOX on the first stage.

Stage two RP-1 loading is complete around 20 minutes before launch. Four minutes later, stage two LOX load begins. At T-7 minutes, the Falcon 9 first stage chills its engines with liquid oxygen to ensure there are no thermal shocks to the engines at ignition. The T/E retracts to the launch position of 88.2 degrees at T-4 minutes and 30 seconds.

At T-3 seconds, the nine first-stage engines are commanded to ignite. A second later, the engines ignite and begin a final health check. Once the engines are verified to be healthy and producing full thrust, the hydraulic hold-down clamps and the T/E retract, allowing liftoff. 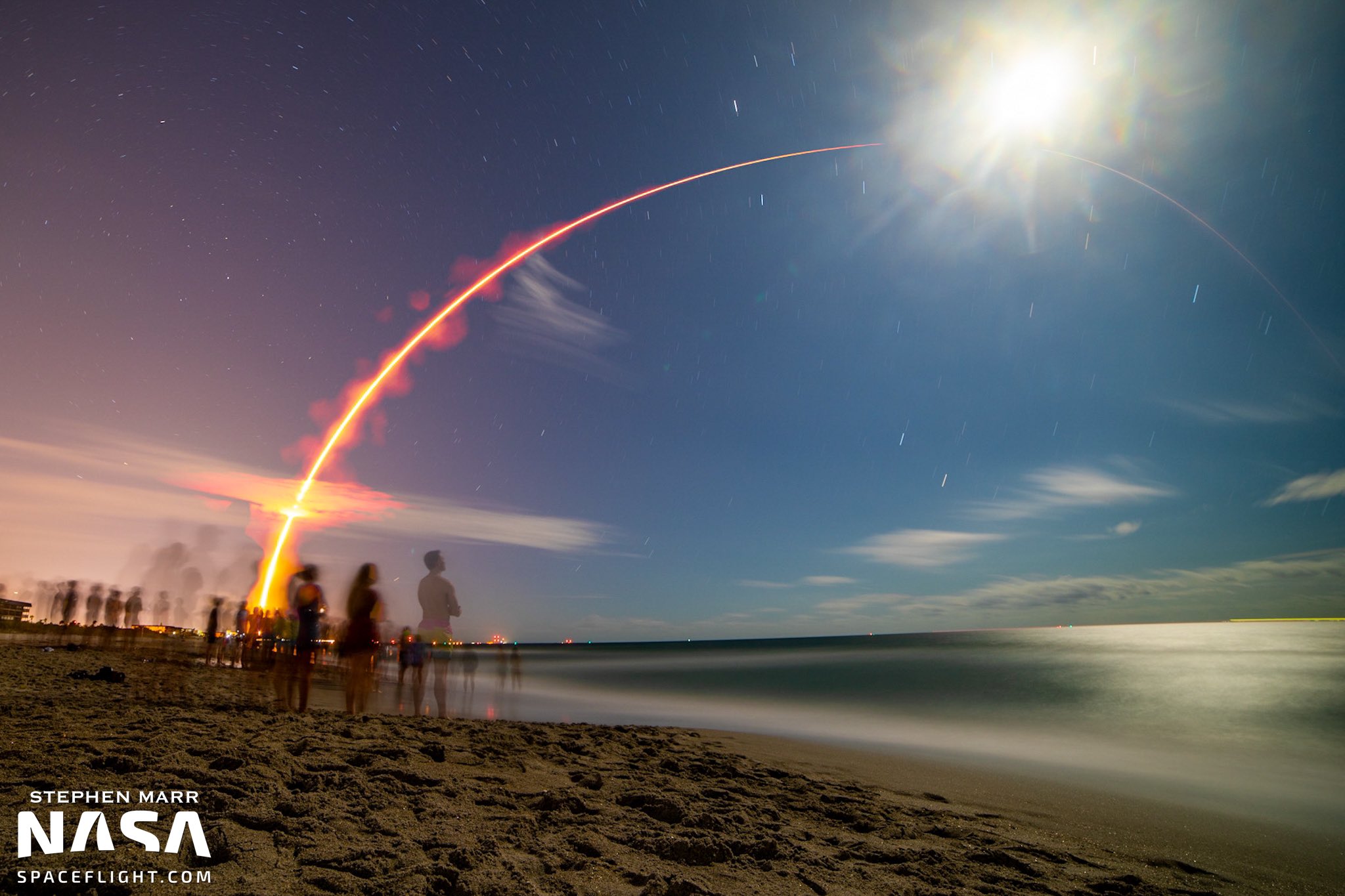 After burning for two minutes and 32 seconds, the nine first-stage engines shut down. Three seconds later, the first and second stages separate, followed by Second Engine Start (SES)-1 eight seconds later. The payload fairing protecting the satellite is no longer needed and is jettisoned three minutes and 23 seconds into the flight.

As stage two continues toward orbit, stage one begins a short coast period. At T+6 minutes and 30 seconds, stage one begins its reentry burn. Engines one, five, and nine reignite for a 25-second burn to slow the first stage down and protect itself from the stresses of atmospheric reentry.

Eight minutes and eight seconds into the flight, the second-stage engine shuts down. The second stage is then in a low Earth parking orbit before beginning a second burn. Stage one begins its landing burn 14 seconds later. Roughly 22 seconds later, the first stage gently touches down on the deck of JRTI. JRTI left Port Canaveral on Oct. 29 and is stationed ~670 km downrange.

With the successful landing, B1067-7 becomes B1067-8 and will return to Port Canaveral to be refurbished for a future mission. 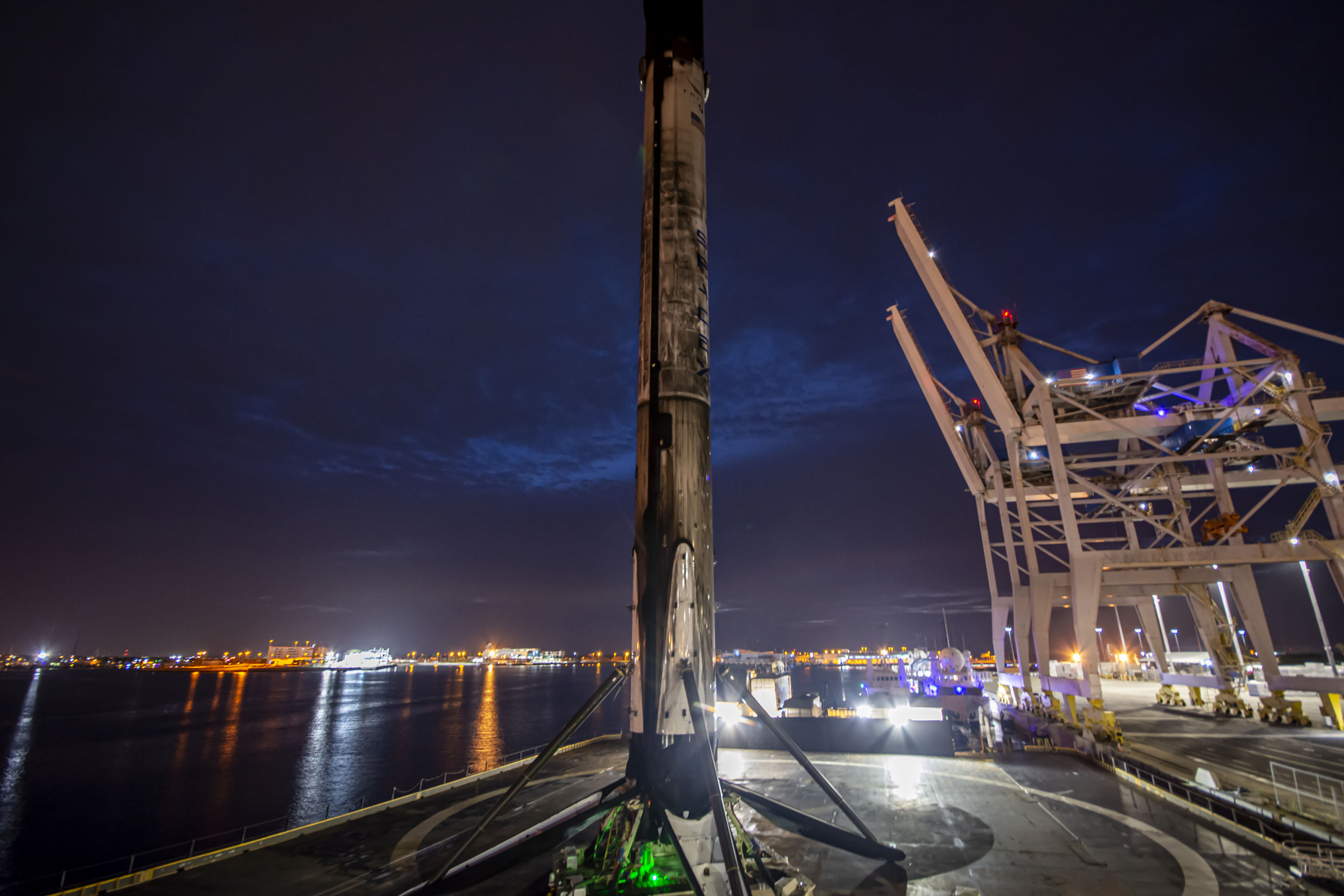 After coasting for 21 minutes, the second-stage engine reignites for roughly 50-seconds to reach an elliptical GTO. Another short six-minute coast takes place before the second stage releases Hotbird-13G into GTO.

Once separated from the second stage, Hotbird-13G will begin systems activation and solar array deployment. Over the next few months, Hotbird-13G will use its electric propulsion to raise itself to GEO. After completing on-orbit testing, the satellite will locate itself at an orbital position of 13 degrees east, joining Hotbird-13F. Once in operation, the two satellites will be located above Africa, providing broadcasting services to Europe, North Africa, and the Middle East.

Eutelsat still has one more launch before the end of the year. NET mid-November, Falcon 9 will launch the Eutelsat-10B satellite to GTO on B1049-11’s final flight. Using the Spacebus-Neo-200 satellite bus, Eutelsat-10B was delivered to CCSFS via boat on Oct. 29, 2022.