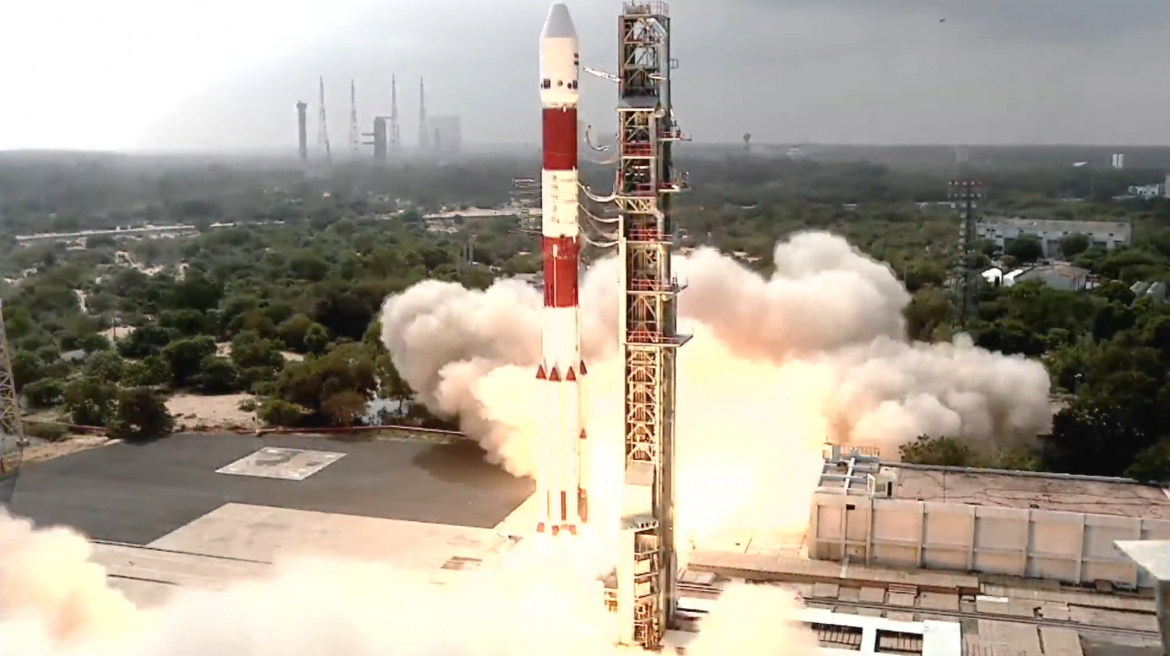 India launched a new ocean monitoring satellite on Saturday morning, using its PSLV rocket to deliver the EOS-06 spacecraft into a low Earth orbit. The mission, PSLV C54, lifted off from the Satish Dhawan Space Centre at 11:56 local time (06:26 UTC).

EOS-06, also known as Oceansat-3, is the latest in a series of satellites operated by the Indian Space Research Organisation (ISRO) since 2009 to study and monitor Earth’s oceans. It will replace Oceansat-2, which was launched in Sept. 2009, continuing its work and bringing enhanced capabilities to the role.

The satellite’s primary role is to monitor the color of the ocean surface and to collect data on wind speed and direction over the surface. This allows scientists to monitor conditions, such as the distribution of chlorophyll in the world’s seas, phytoplankton blooming, and chemicals and minerals present in the water. As well as being of scientific interest, this research has practical applications, such as helping to locate suitable fishing grounds.

The EOS-06 mission is part of ISRO’s Earth Observing Satellite (EOS) series, which covers many of the agency’s current and upcoming Earth science missions. With EOS, ISRO has returned to its former practice of naming all such missions under a single umbrella — which it previously did under the Indian Remote Sensing (IRS) program before separating out individual projects in the late 1990s.

The 1,117-kilogram EOS-06 satellite is equipped with four payloads. Its primary sensor is the Ocean Color Monitor 3 (OCM-3), a successor to the OCM-2 instrument on Oceansat-2. OCM-3 is a 13-band multispectral imaging system capable of recording images of the Earth at a resolution of 360 meters across 10 visible-light bands, with a lower resolution of around 1.4 kilometers available across the three additional bands in the near-infrared.

The Sea Surface Temperature Monitor (SSTM) is an infrared imaging instrument that will be used to study the temperature of the ocean surface. It is a new instrument for Oceansat-3 compared to its predecessors, and its 1,440-kilometer swath width allows EOS-06 to record daily global temperature data at a 1.08-kilometer resolution.

The Scatterometer for Oceansat-3, or OSCAT-3, is used to monitor ocean winds. The scatterometer will emit a radio beam in the Ku-band at a frequency of 13.515 gigahertz and record how the signal is backscattered. The power of the backscattered signal is affected by the speed and direction of the wind, so by analyzing the results, a set of wind vectors can be established across the ocean’s surface.

In addition to these sensors, EOS-06 also carries the Advanced Data Collection System 4 (ARGOS-4) payload for the French space agency, CNES. ARGOS is a communications payload that will be used to receive and relay data transmitted by remote research stations and data collection platforms around the world. 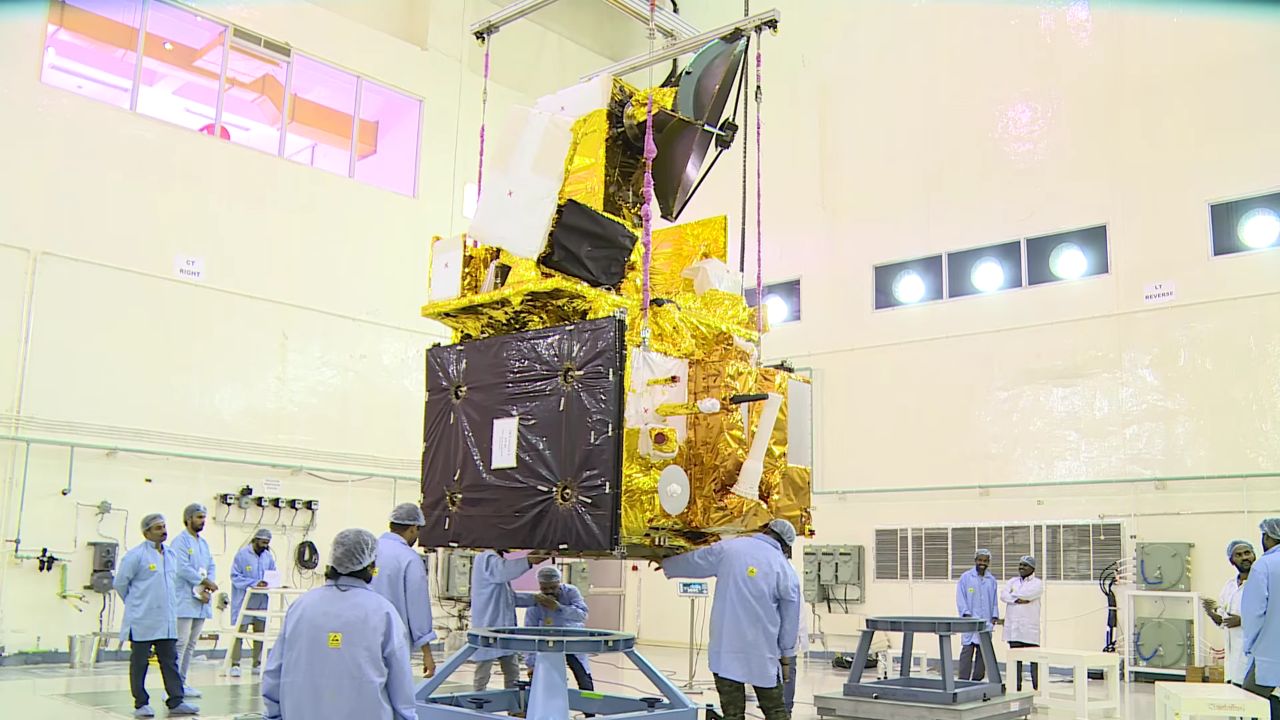 The EOS-06 satellite being prepared for launch. (Credit: ISRO)

Joining EOS-06 for the journey into orbit were eight secondary payloads — smaller satellites hitching a ride aboard the same rocket. The largest of these is Indian Nanosatellite 2B (INS-2B), with a mass of 18.28 kilograms. Also named BhutanSat, it has been built in partnership between ISRO and the Kingdom of Bhutan. It carries a multispectral imager, NanoMx, and a data repeater.

Anand, or Pixxel-TD 1, is an Earth observation satellite developed by commercial operator Pixxel. A 16.51-kilogram satellite, it will serve as a prototype and precursor to a large constellation of imaging satellites that Pixxel plans to deploy in the future. Anand will allow Pixxel to test the constellation’s hyperspectral imager in orbit.

A pair of Thybolt satellites, Thybolt-1 and -2, were carried for India’s Dhruva Space. These are tiny 0.5-unit CubeSats, measuring 10 by 10 by 5 centimeters, with a combined mass of 1.45 kilograms. The satellites carry a store-and-forward messaging system for use by amateur radio enthusiasts, with the satellite collecting messages uplinked by users and downlinking them to be uploaded to a website. Built around P-DoT, a CubeSat bus developed by Dhruval Space, the satellites will also aim to test and validate this platform in space.

PSLV carried four satellites for Swiss communications company Astrocast. The four Astrocast 0.3 satellites will continue the company’s research and development work as it moves towards deploying a large constellation of satellites to relay machine-to-machine (M2M) communications. These low-data-rate services, operating in the L-band, are designed to allow internet of things (IoT) devices to communicate anywhere in the world. The four Astrocast satellites are three-unit CubeSats and have a combined mass of 17.92 kilograms. 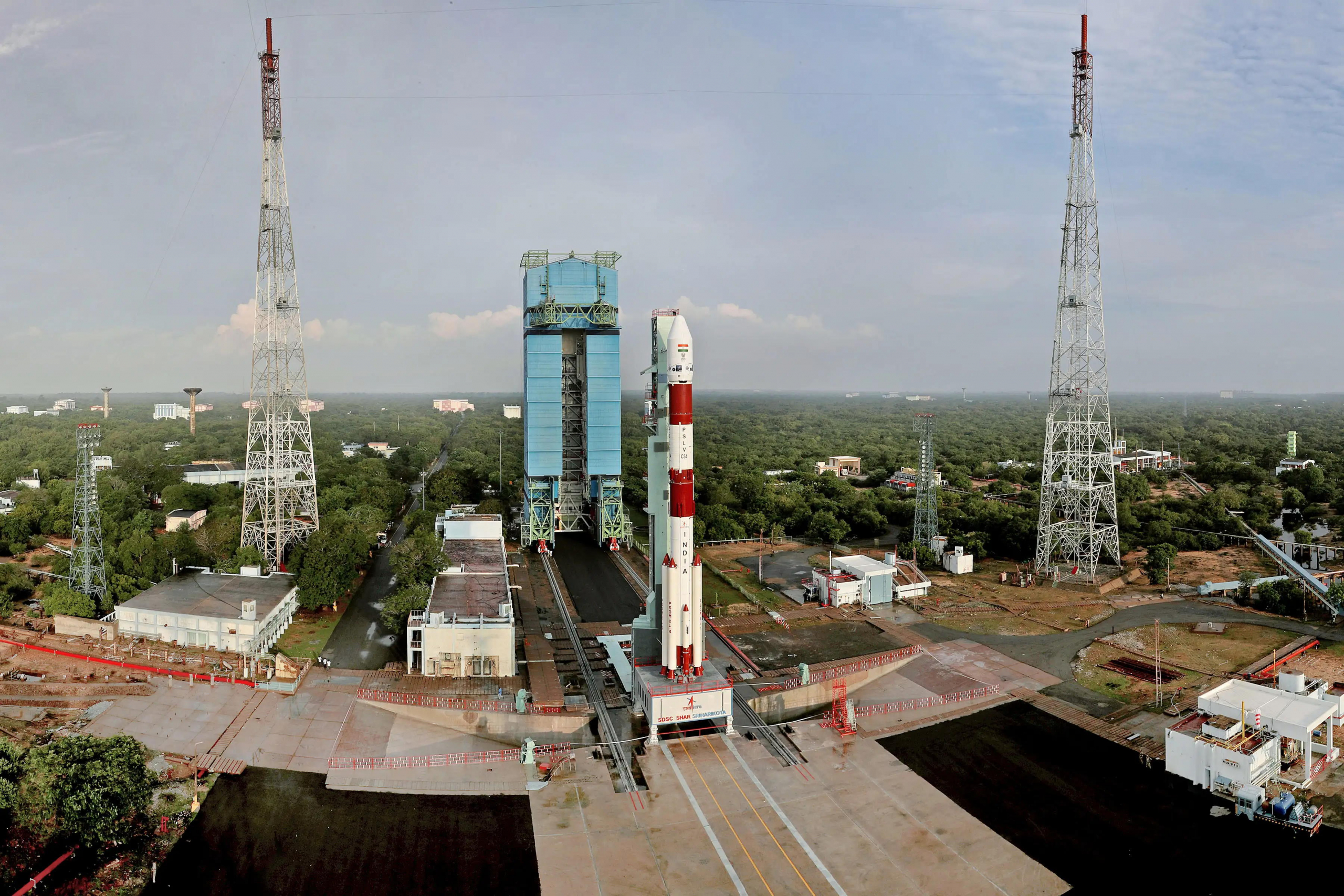 PSLV C54 at the launch pad prior to Saturday’s mission. (Credit: ISRO)

ISRO used its Polar Satellite Launch Vehicle (PSLV) rocket to deploy EOS-06 and its co-passengers into a low Earth orbit. First flown in September 1993, PSLV is ISRO’s workhorse, having flown 55 missions before Saturday’s launch. A four-stage rocket using a combination of solid and liquid-propellant stages, it can fly in several different configurations — varying the type and number of strap-on boosters attached to the first stage — depending on required mission performance.

Five different configurations have been used. The standard PSLV, also known as PSLV-G, used six PS0M boosters powered by S-9 solid rocket motors, clustered around its PS1 first stage. The PSLV-XL — the rocket’s heaviest-lift configuration — uses the same number of the more powerful PS0M-XL booster, with an S-12 motor. The intermediate PSLV-DL and PSLV-QL variants use two and four PS0M-XL boosters respectively, while the smallest PSLV Core Alone (PSLV-CA) flies without any boosters.

For Saturday’s launch, ISRO used the PSLV-XL configuration with its six solid rocket motors. Introduced in 2008, the PSLV-XL is the most-used version of the rocket and offers the greatest payload capacity. The vehicle launched EOS-06 had flight number PSLV C54.

After exhausting their propellant, the first pair of ground-lit boosters were jettisoned 69.9 seconds after launch, with the second pair following two-tenths of a second later. The air-lit boosters separated at the 92-second mark in PSLV’s flight, leaving the first stage firing alone for another 16 seconds. 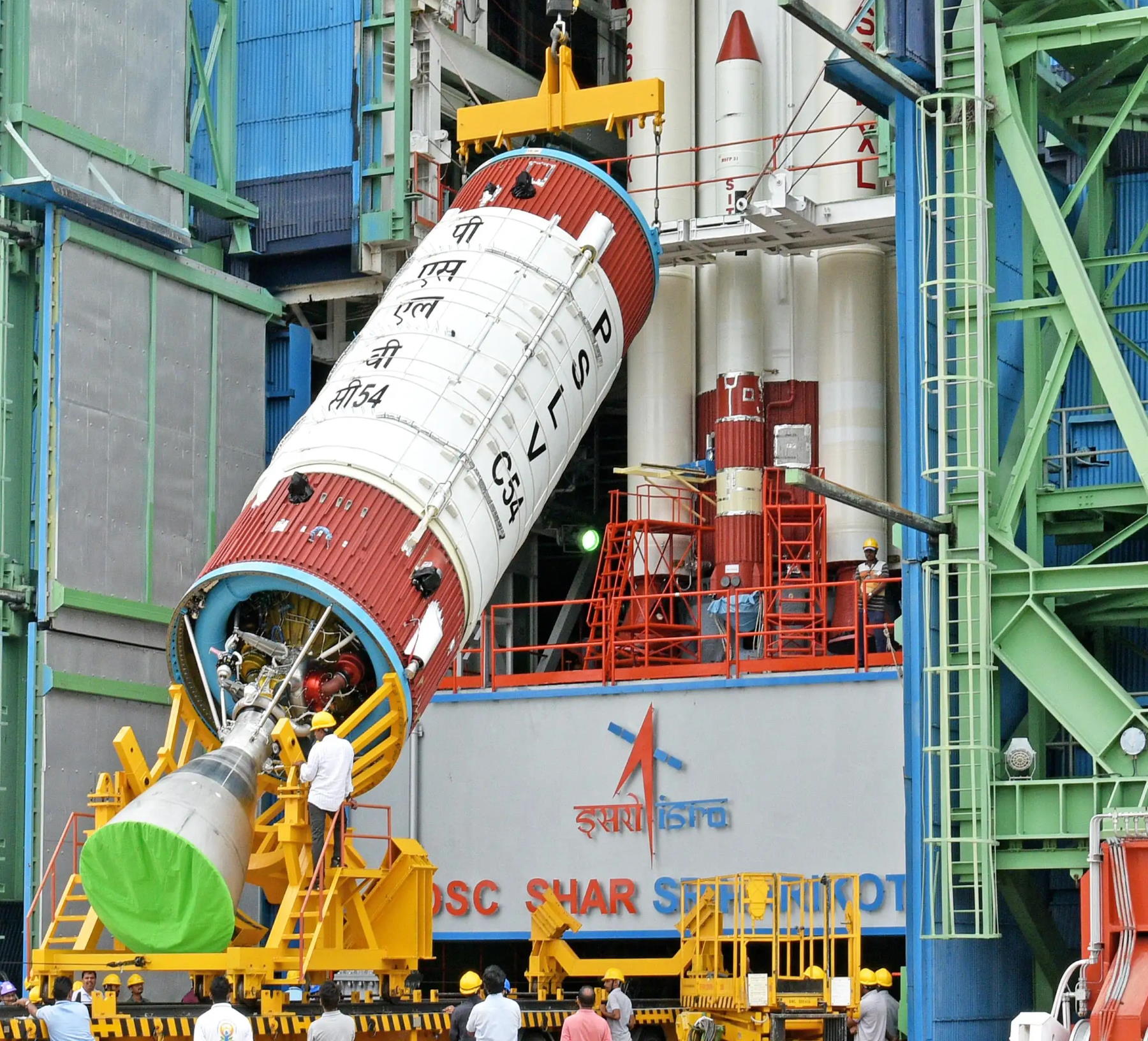 At one minute and 48 seconds mission elapsed time, PSLV’s expended first stage separated. Two-tenths of a second later, the second stage — designated PS2 or PL40 — ignited its Vikas engine to continue the ascent. Vikas is a liquid-fueled engine, burning UH25 propellant — a mixture of unsymmetrical dimethylhydrazine and hydrazine hydrate in a 3:1 ratio — oxidized by dinitrogen tetroxide. It is a license-built derivative of the Viking engine formerly used on Europe’s Ariane rocket.

Forty seconds into the second stage burn, PSLV’s payload fairing separated. Termed a “heat shield” by ISRO, the fairing serves to protect the satellites and preserve the rocket’s aerodynamic profile as it climbs through the atmosphere. Upon leaving the atmosphere, it is jettisoned, reducing the rocket’s overall mass and exposing the satellites to space. Shortly after fairing separation, the rocket initiated closed-loop guidance.

The second stage flight lasted 152 seconds. The second and third stages then separated, with third-stage ignition occurring about 1.2 seconds later. The third stage, HPS3, has an S-7 solid rocket motor that burned for about 70 seconds. Following third stage burnout, the mission entered a coast phase as PSLV climbs towards the apogee — or highest point — of its trajectory. Stage separation occurred at eight minutes and eight seconds mission elapsed time, with fourth stage ignition about 10 and a half seconds after that.

PSLV’s fourth stage, the PS4 or L-2-5, is liquid-fueled and restartable, allowing it to make multiple burns for precise orbit insertion or to deliver several payloads into different orbits. Its twin main engines burn monomethylhydrazine propellant with mixed oxides of nitrogen as an oxidizer. During Saturday’s launch, the stage only made one burn, which lasted eight minutes and seven seconds. At its conclusion, PSLV was in an orbit roughly 740 kilometers in altitude, inclined at 98.34 degrees. EOS-06 separated about 47 seconds after the end of the burn to begin its mission. 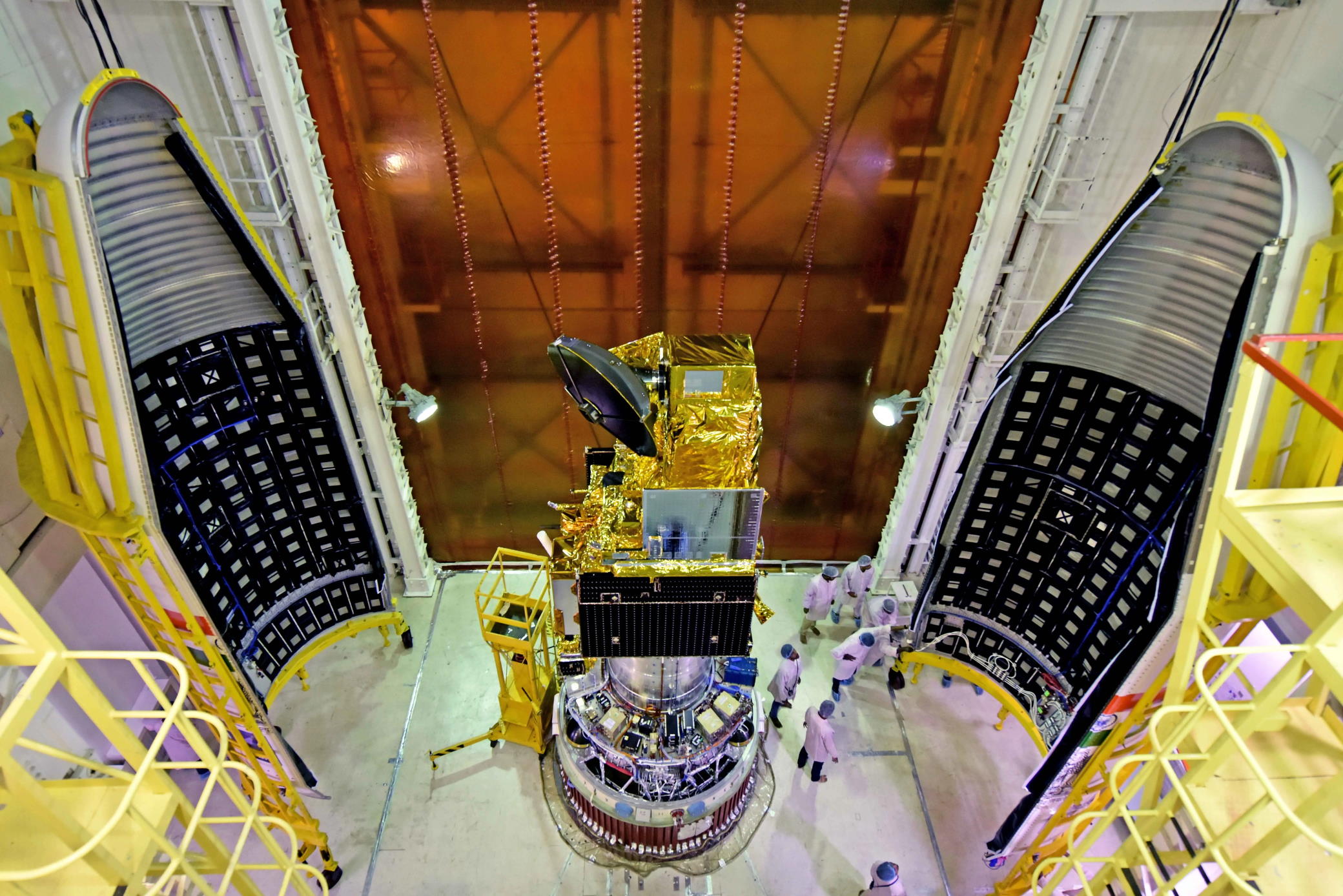 EOS-06 and its co-passengers are encapsulated in PSLV’s payload fairing. (Credit: ISRO)

After EOS-06 separates, the upper stage used its orbit adjustment thrusters to make a pair of orbit change maneuvers, lowering its orbit in preparation for the deployment of the other payloads. The first of these began 24 minutes and 11 seconds after EOS-06 separation, itself lasting 24 minutes and 19 seconds. After a 25-minute and 51-second coast, the thrusters fired again to begin the second orbit change maneuver, which lasted 21 minutes and 18 seconds. These maneuvers lowered PSLV’s orbit to around 510 kilometers, changing the orbital inclination to 97.45 degrees.

The two Thybolt satellites were the first of the secondary payloads to deploy, ejecting from their dispenser about 90 seconds after the end of the maneuver. Astrocast separated next, followed by Anand, and finally INS-2B. From the first to the last deployment, the process was expected to take 11 minutes. With spacecraft separation complete, the upper stage underwent passivation to safe its oxidizer and fuel tanks as it is to remain in orbit.

Saturday’s launch was India’s fifth of the year, three of which have been made by PSLV rockets. There are no more Indian launches currently planned for 2022 with firm dates, however another test flight for the Small Satellite Launch Vehicle (SSLV) and a GSLV Mk.II launch of a navigation satellite were previously expected for the tail end of 2022 and are not yet confirmed to have slipped.

If neither the SSLV nor GSLV Mk.II launches take place, then the EOS-06 launch will round out a year that has seen significant milestones for ISRO. The agency’s SSLV rocket made its maiden flight in August, and although it failed to achieve orbit, vital information will have been learned that can be built upon ahead of the type’s next development launch. ISRO’s most recent launch prior to Saturday’s mission marked the commercial debut of the GSLV Mk.III — also known as LVM3 — deploying 36 OneWeb satellites successfully. A second launch for OneWeb is currently slated for January or February next year.