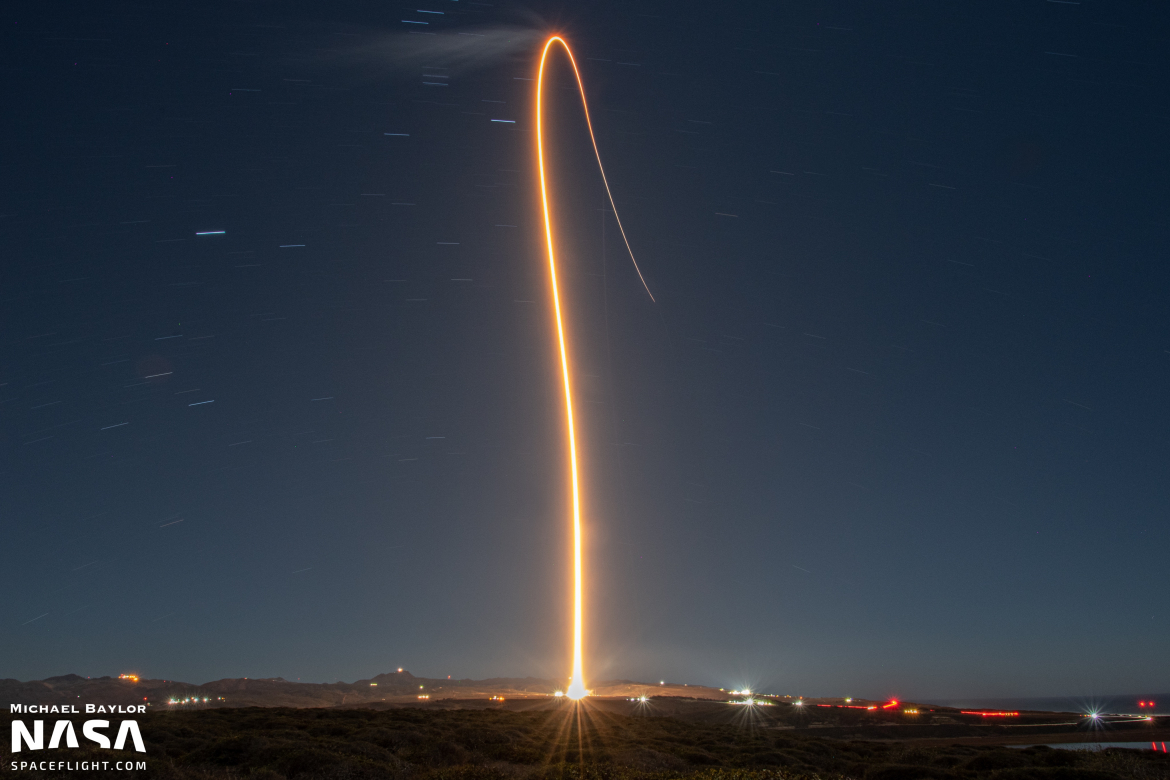 The Atlas rocket family, a staple of the US launch industry since June 11, 1957, ended its West Coast operations on Nov. 10 with the launch of an Atlas V rocket with the JPSS-2 weather satellite.

Liftoff of the mission from Space Launch Complex-3 East (SLC-3E) at Vandenberg Space Force Base, California, is scheduled for Thursday, Nov. 10 at 1:49 AM PST (09:49 UTC).

JPSS-2 is part of the Joint Polar Satellite System, the most recent generation of US polar-orbiting, non-geosynchronous, environmental satellites for the National Oceanic and Atmospheric Administration (NOAA). The satellites themselves are developed by NASA for NOAA, the latter of which oversees their operation.

Upon reaching orbit, JPSS-2 will join the first two satellites of the program, Suomi NPP, launched in October 2011, and JPSS-1, which launched in November 2017 and was renamed NOAA-20 after reaching its final orbit.

JPSS-2 will operate in a Sun-synchronous orbit of 824 kilometers altitude inclined 98.8° to enable global coverage twice a day. Liftoff was set in a window to allow for an ascending node crossing of the equator, per mission requirements.

Unlike its predecessor in JPSS-1, which was built by Ball Aerospace, the second JPSS satellite was manufactured by Northrop Grumman and is based around its LEOStar-3 satellite bus.

LEOStar-3 will be responsible for the control and stabilization of the satellite, which will be accomplished via three-axis, zero momentum bias, and nadir pointing. For pointing, JPSS-2 will have 0.13° arc second control and 0.02° arc second knowledge.

The ATMS instrument will monitor atmospheric moisture and temperature profiles for real-time weather forecasting as well as continuity of measurements for climate monitoring.

CrIS, on the other hand, will enable high-resolution 3D moisture, pressure, and temperature profiles, and allow for better modeling in both short and long-term weather forecasting. In particular, the instrument is expected to greatly improve knowledge of the regular El Niño and La Niña climate fluctuations.

Meanwhile, OMPS will continue a near-30-year records process of monitoring the ozone layer’s complex chemistry and its destruction around the troposphere.

Finally, VIIRS will provide global maps in the visible and infrared spectrums of land, ocean, and atmospheric conditions at high temporal resolution. VIIRS will replace and upgrade the Advanced Very-High-Resolution Radiometer that flew on previous NOAA satellites. 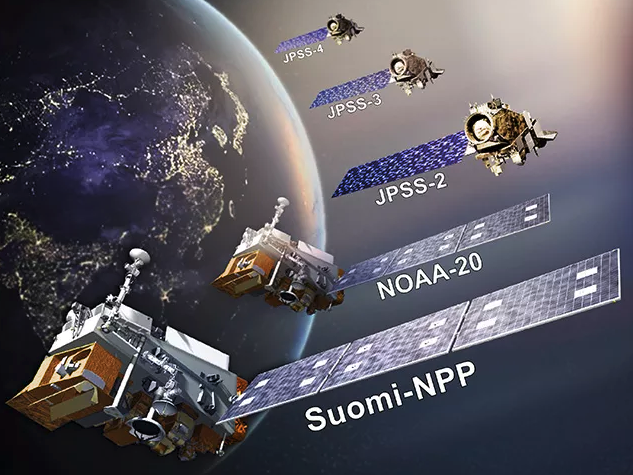 Two additional JPSS satellites are currently being built by Northrop Grumman after the company won the contract to build JPSS-2, -3, and -4. JPSS-3 is targeted to launch in 2024, followed by JPSS-4 in 2026.

Joining JPSS-2 atop the Atlas V rocket as a secondary payload is NASA’s LOFTID spacecraft, otherwise known as the Low-Earth-Orbit Flight Test of an Inflatable Decelerator.

LOFTID will demonstrate how a large aeroshell, six meters in diameter, performs during reentry from low Earth orbit.

Utilizing an inflatable aero decelerator/heatshield such as LOFTID comes with numerous potential applications for the size and mass of future interplanetary missions that require larger heatshields than the rigid aeroshell casings current designs utilize.

Moreover, inflatable heatshields could also enable the recovery of large rocket stages, such as the engine section of ULA’s upcoming Vulcan rocket. They could also permit NASA to bring more mass back from the International Space Station, as well as enable the return of large-scale in-space manufacturing assets.

NASA specifically notes, too, that this kind of technology is “scalable to both crewed and large robotic missions to Mars.”

The Atlas rocket family, which for decades was a cornerstone of the US launch market, is set to end its west coast career as ULA prepares for a transition to their next-generation launch vehicle, Vulcan.

The Atlas family lineage traces back to June 1957, when the first Atlas SM-65 missile was launched from LC-14 (Launch Complex 14) at Cape Canaveral in Florida. The first launch of an Atlas from Vandenberg took place on Sept. 9, 1959.

From there, the Atlas went on to launch the Project Mercury human flights, and first-stage Atlas boosters were paired with upper stages, including Agena and Centaur.

The Atlas booster underwent a major upgrade with the Atlas III rocket, introducing the RD-180 engine and discontinuing the stage-and-a-half configuration for the more standard two-stage rocket design.

The Atlas booster underwent another upgrade with the Atlas V, wherein the Atlas line’s usual use of balloon tanks was discontinued in favor of a more-traditional booster design that is easier to handle and transport.

Now, 63 years after the first flight of an Atlas from California, the rocket bows out of operations from Vandenberg as ULA ends the Delta and Atlas rocket lines in favor of a single system in Vulcan.

Speaking to NASASpaceflight on the milestone, Gary Wentz, Vice President of Government and Commercial Programs at ULA, said, “It’s bittersweet to see it go away, but it’s also important from a ULA perspective to move to the next vehicle. It’s not an Atlas or a Delta. It’s a Vulcan, which I would say is the best of both worlds.”

While the Atlas lineage itself is set to retire later this decade, the Vulcan rocket is incorporating elements of Atlas and Delta into its design, while introducing new engines, propellants, and manufacturing processes for increased capability and reduced cost.

However, a key difference between Florida and California for the transition between Atlas and Vulcan is that the Vandenberg launch site at SLC-3E could not be converted for dual rocket use like the Florida launch facility at SLC-41.

SLC-3E requires a hard cutover from Atlas to Vulcan because of the fixed nature of the pad. At SLC-3E, the rocket is stacked and fully integrated on the launchpad, whereas in Florida the rocket is integrated in a separate building and then rolled out to the pad.

ULA will fly the Atlas 4-meter payload fairing for the final time tomorrow morning. Window opens at 1:25 am PST (9:25 UTC). It is also the final Atlas V launch from Vandenberg. @NASASpaceflight pic.twitter.com/pA8khYE9gH

At Vandenberg, crane work inside the mobile servicing tower is required for the increased size and mass of Vulcan, while the propellant farm needs a complete overhaul to support increased loads of liquid oxygen, new liquid hydrogen tanks, and the addition of liquid methane for the BE-4 engines, which are provided by Blue Origin, that will power Vulcan’s first stage.

Vulcan is also a more powerful rocket than Atlas V, necessitating an upgrade of the sound suppression system at SLC-3E as well.

Moreover, modifications to the environmental control systems for payload management are also required due to different capabilities on Vulcan for payload air conditioning and different supply functions over the Atlas V.

Overall, though, much of the architecture currently present at SLC-3E will remain, with Wentz noting that “a lot of infrastructure and support systems will just be modified to increase capacity or to provide better access for or to a different configuration.”

Working to convert the pad to Vulcan will begin once Atlas V launches JPSS-2 and ULA teams can safe the pad and hazardous systems for the change-over work.

According to Wentz, local contractors will begin work with a focus on enlarging platforms inside the mobile servicing tower.

The entire overhaul for the launchpad and all of its systems is anticipated to take approximately one year, with the pad itself being “done by the beginning of 2024,” according to Wentz.

Upon completion, the pad will be able to handle every possible configuration of the Vulcan rocket, including its most powerful variant, which features six strap-on solid rocket boosters.

While the most powerful variant of the Atlas V rocket to fly, the 551, never flew from California, that was simply a coincidence as all of the missions Atlas V was awarded that launched from Vandenberg did not require that many solid rocket boosters at liftoff to achieve mission objectives.

After pad modifications are complete, ULA will have the capability of launching a Vulcan from SLC-3E roughly every two weeks.

“From a pad perspective, the cadence would be similar [to SLC-41 in Florida] provided the workforce and the spacecraft demand is here,” noted Wentz. “So we’re driving to be able to launch a Vulcan in roughly 14 to 16 days depending upon the configuration. And we would be able to do the same thing on the West Coast if we had the need.”

In addition to being the last Atlas to launch from Vandenberg, JPSS-2 is also the last flight of Atlas’s four-meter diameter payload fairing. After JPSS-2, only 19 Atlas rocket flights remain before the line’s retirement: seven Starliner crew flights to the ISS in the N22 configuration, and 12 flights in the 551 configuration, including nine flights for Project Kuiper, USSF-51 for the US Space Force, ViaSat-3 EMEA, and NROL-107 for the National Reconnaissance Office.