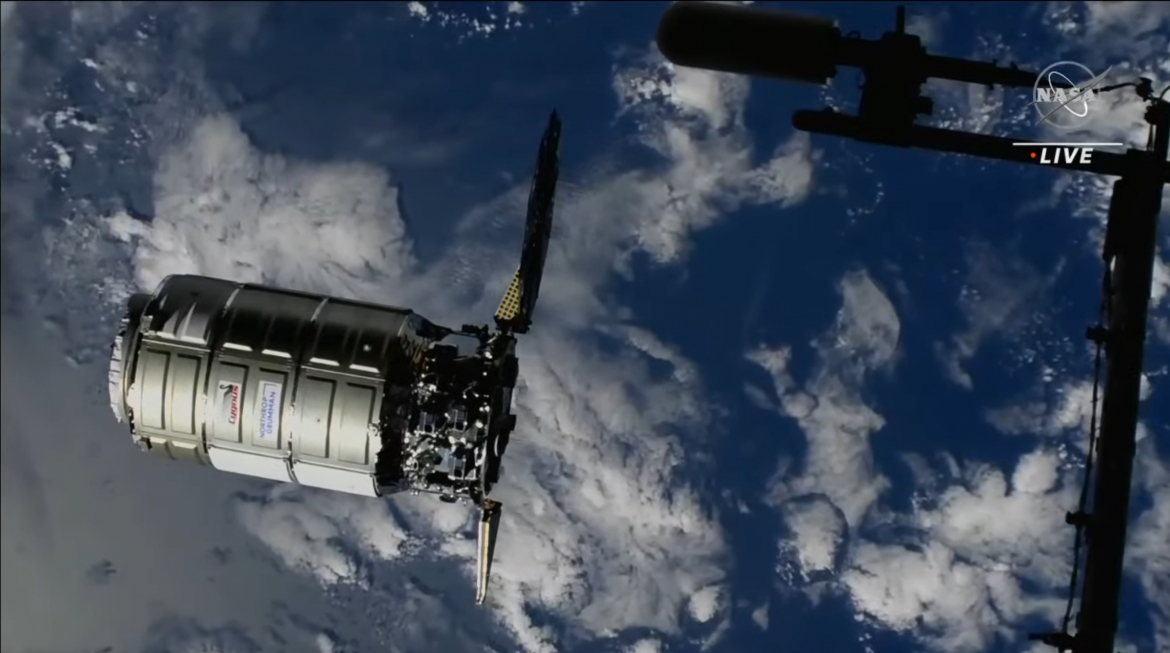 Despite one of its solar arrays failing to fully deploy, the cargo vehicle successfully arrived at the ISS for berthing two days later.

While Northrop Grumman is yet to comment on the interesting event during launch, relating to a large attitude correction at staging and going into the upper stage burn, NG did confirm that one of the vehicle’s two solar arrays had failed to fully deploy.

“The Northrop Grumman Cygnus cargo spacecraft has successfully deployed one of its two solar arrays and completed four rendezvous burns on its way to the International Space Station. To remain focused on the spacecraft’s arrival at the station, Northrop Grumman and NASA made the determination not to deploy the second solar array after initial attempts to deploy it were unsuccessful.

The first good view of NG-18 Cygnus with one of its arrays undeployed. pic.twitter.com/uUl9SQOFUl

“The Cygnus team is gathering information on why the second array did not deploy as planned. Cygnus has sufficient power to rendezvous with the space station Wednesday, Nov. 9. Northrop Grumman is working closely with NASA to monitor and assess the spacecraft ahead of tomorrow’s planned arrival, capture, and installation at the space station.

“Mission teams also are planning additional inspections of the cargo spacecraft during approach and after capture.”

Antares carried an Enhanced Cygnus spacecraft, named the S.S. Sally Ride, to orbit on a mission to resupply the Expedition 68 crew. Cygnus is bringing crew supplies, new science experiments, and other payloads, including a new Nanoracks module, to the station before serving as a disposal craft at the end of its mission for soiled clothing, used experiments, and general work and living trash.

Overall, according to Northrop Grumman in an interview with NASASpaceflight, “It’s gonna be a pretty standard mission. There’s a full science complement,” said Steve Krein, Vice President of Civil and Commercial Space for Northrop Grumman.

Behind that, however, wsa an increase in payload upmass Northrop Grumman was able to effect on this mission.

“So we were able to refine our modeling of the propulsion, both on stage one and stage two, and take out some of the conservatism in our models,” said Kurt Eberly, Director of Space Launch Programs at Northrop Grumman. “We offered up an additional 70 kilograms, so we were launching 8,050 kilograms on NG-12 to 17. And so for NG-18 and 19, we’ve upped that to 8,120 kilograms.”

This total upmass includes Cygnus’ wet mass after it is loaded with its necessary propellants for on-orbit maneuvers.

NG-18 was the first of eight added cargo flights that were ordered by NASA from Northrop Grumman to extend the preexisting Commercial Resupply Services 2 (CRS2) contract of Cygnus. In total, NASA ordered two additional flights in 2020, including NG-18 and NG-19, and then six more in March 2022.

The Cygnus spacecraft for this mission is named after astronaut Sally Ride, who was the first American woman in space. Ride flew on board two Space Shuttle missions aboard the Challenger: STS-7 and STS-41G. Ride also was a member of the Rogers commission following the Challenger Disaster in 1986.

Ride died in 2012 due to pancreatic cancer.

“There is actually a flag that we’re flying, an American flag signed by the students and staff from Sally Ride Elementary School in Los Angeles, California. So, we’re extremely proud to be able to do that, to honor her legacy,” said Krein.

The first stage of the Antares rocket was both designed and built in Ukraine. The stage was designed by KB Yuzhnoye and is derived from the now-retired Zenit rocket. The stage was then built by Yuzhmash in Dnipro, Ukraine. 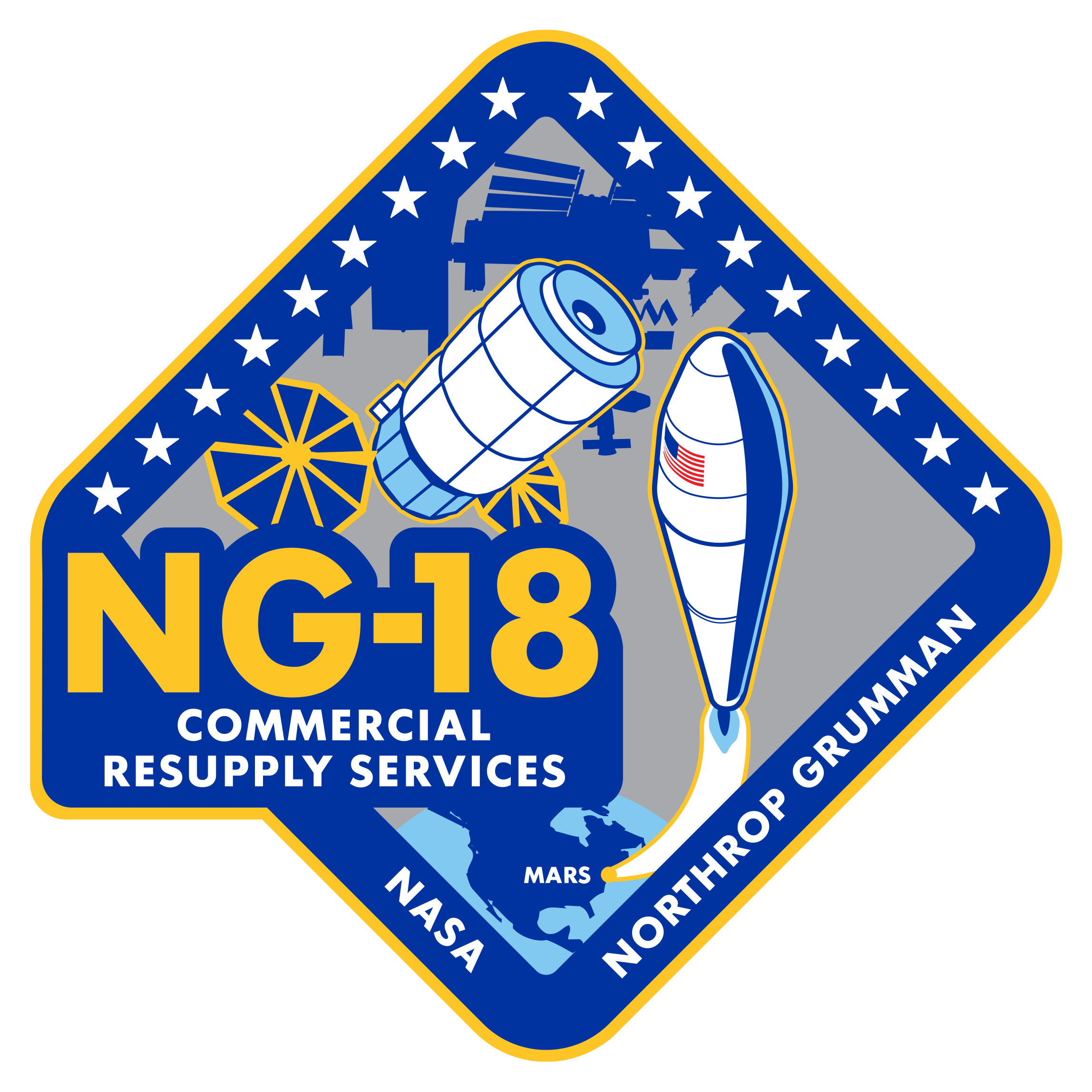 The launch vehicle utilizes two Energomash RD-181 engines which were built in Russia. The engines each run on RP-1 kerosene and liquid oxygen (LOX) and have independent thrust vectoring.

The RD-181 engines replaced the Aerojet Rocketdyne AJ-26 engines, which were retooled versions of the Soviet NK-33 engines built by the Kuznetsov Design Bureau. The AJ-26 engines were used on the first four flights of Antares.

Both the RD-181 engines and the first stage of Antares were delivered to Northrop Grumman at Wallops in the fourth quarter of 2021. The hardware for the NG-18 and -19 missions was not affected by Russia’s invasion of Ukraine.

After Cygnus arrived at Wallops, both segments were mated together, creating the spacecraft as a whole. After this, the spacecraft was transported to another facility on Wallops Island where it was loaded with hydrazine and nitrogen tetroxide propellants. It was then transported back to the Horizontal Integration Facility (HIF).

The spacecraft was then rotated to the horizontal position, which allowed personnel to conduct an initial cargo load. Cygnus was then integrated with the Castor 30XL second stage. This was followed by another cargo load before fairing encapsulation. 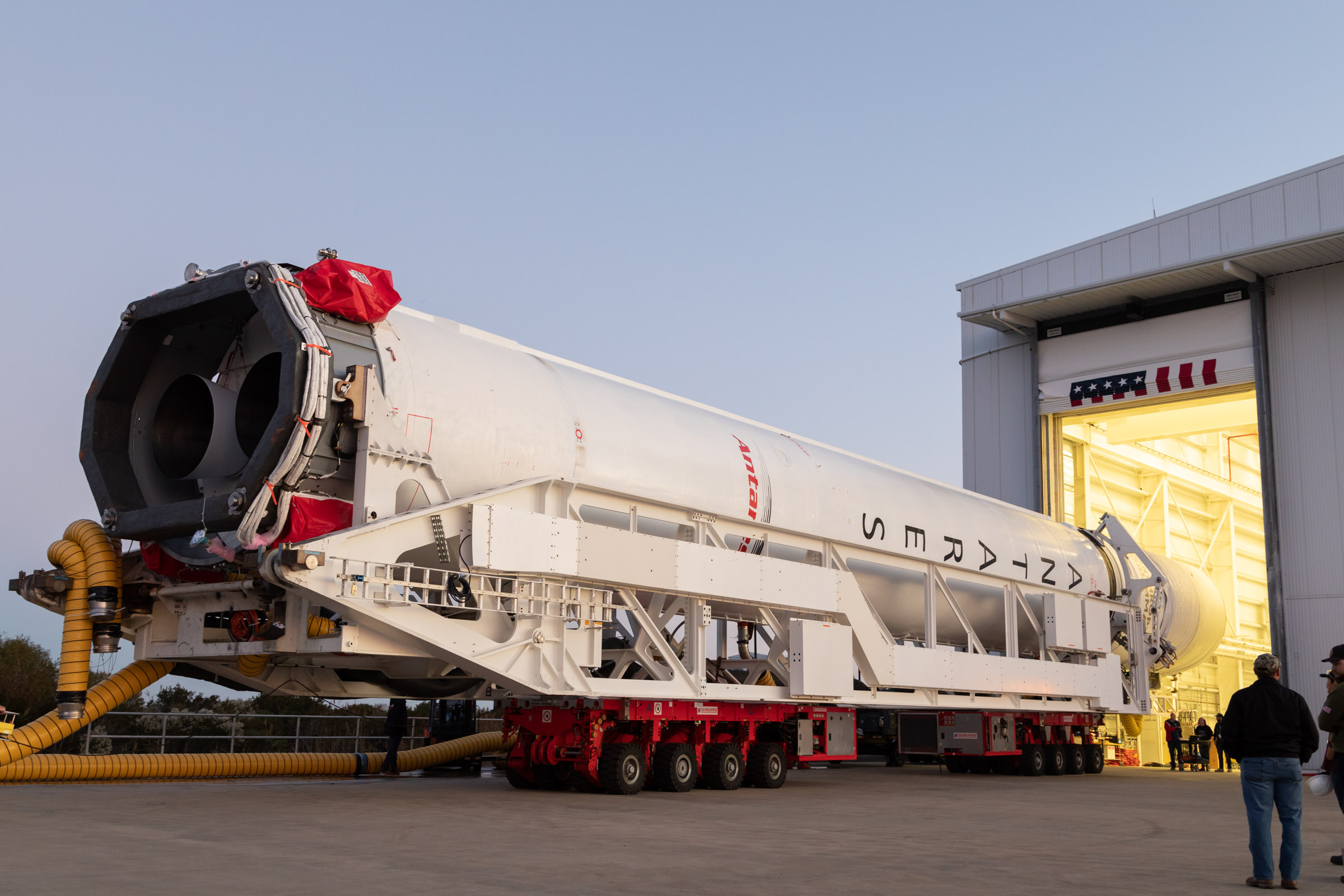 On Nov. 2, the Antares 230+ rocket was rolled out from the HIF and was transported 1.7 km (1.1 miles) south to Pad-0A. Once at the pad, the vehicle rolled up the ramp and was integrated with the launch pad.

“We take that [Antares] up the ramp to the launch pad, we connect the tail into some hydraulic pistons that are buried in a pit on the pad, and then we push up to vertical,” said Eberly.

The following day, teams conducted a combined systems test, which verifies the interfaces between the vehicle, the launch pad, and the NASA range.

Later that day, Antares was lowered to the horizontal position and a mobile cleanroom was then moved over the nose of the rocket, which allowed the teams to conduct late-load cargo operations 24 hours before launch.

Once late-load was complete, the “pop-top” fairing was reinstalled, and the vehicle was rotated back to vertical for launch.

The countdown for the Nov. 6 launch began at 05:50 UTC or 1:50 AM EDT – 10 minutes before the local time change at Wallops to Eastern Standard Time (EST), which reset the local clock to 1:00 AM EST and therefore gave the launch team the full five hours needed for an Antares countdown.

The countdown for launch began five hours before the planned liftoff.

Journey to the ISS

At T0, the Antares rocket lifted off from Pad-0A. The RD-181 engines on the first stage burned for around three minutes 18 seconds. 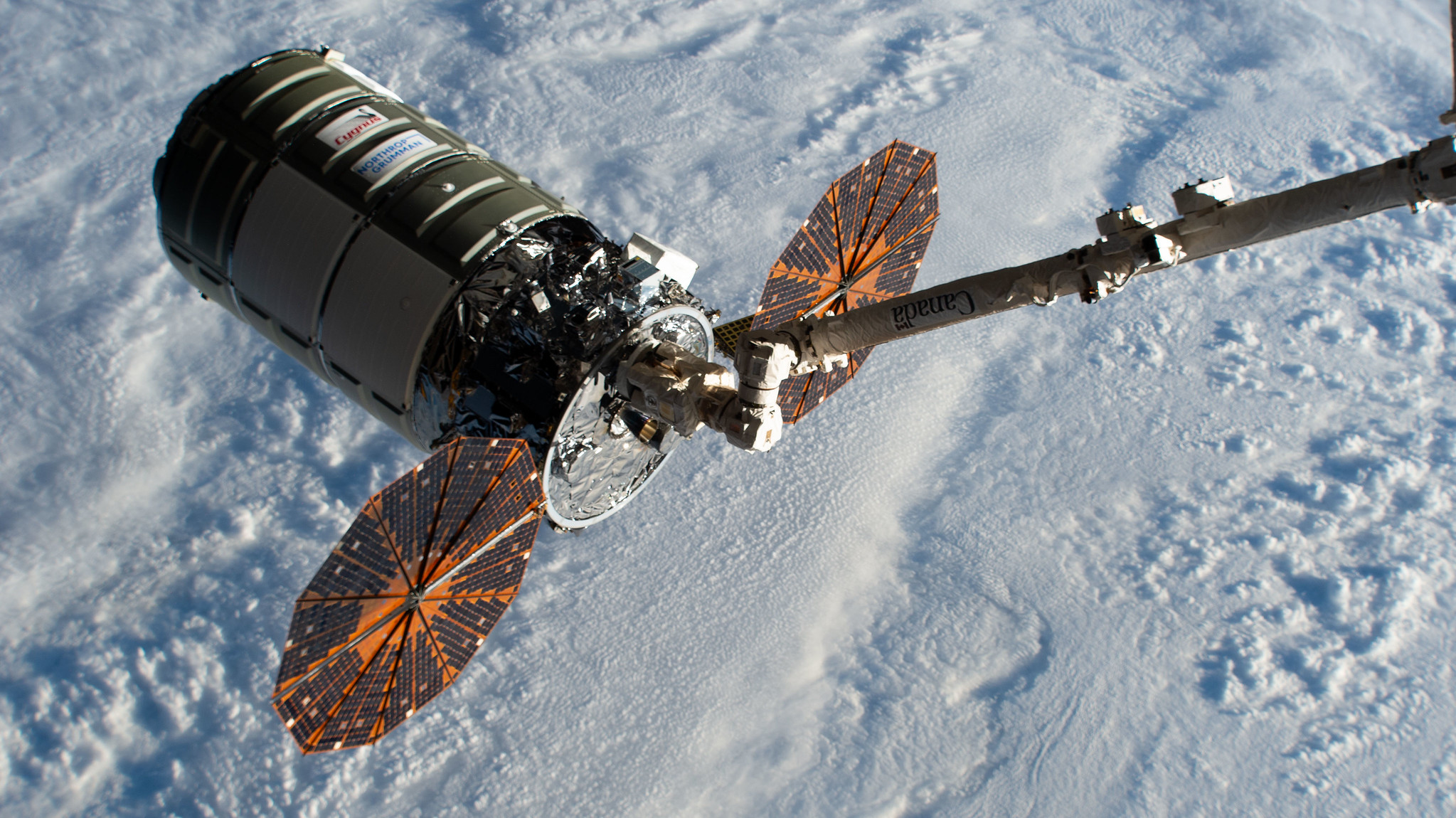 Cygnus is captured by Canadarm2 during the NG-17 mission in February 2022. (Credit: NASA)

Following this, the single Castor 30XL ignited and burned for several minutes. The second stage was a solid rocket motor developed by Northrop Grumman. After burnout, the Cygnus spacecraft separated into a low Earth orbit of approximately 162 x 311 km, which occur approximately nine minutes after launch.

After separation, Cygnus will conduct periodic burns to allow it to make a timely rendezvous with the ISS. The two solar arrays begin deployment around two hours after launch. However, it was later revealed that only one of the arrays fully deployed.

Cygnus arrived at the ISS two days after launch. NASA astronaut Nicole Mann capture the spacecraft with Canadarm2 to then berth it at one of the ports on the US segment of the Station.

The spacecraft is scheduled to remain at the ISS until January 2023.

After the launch of NG-18, the final launch of the Antares 230+ will occur in the spring of 2023 with the NG-19 mission. This comes as Northrop Grumman responds to the Russian invasion of Ukraine by developing a new version of Antares along with Firefly Aerospace.

After NG-19, three Cygnus missions, NG-20, -21, and -22, will launch on SpaceX’s Falcon 9 rocket during the interim period where Firefly and Northrop Grumman continue to develop the Antares 330.

“We want to get back flying these CRS missions as quickly as possible. So the first increment is just the first stage which is just hard enough of course, but the Antares 330 is going to have the Firefly-provided first stage, coupled with the existing upper stack. And so we think that that just minimizes the scope for Firefly, and it minimizes development to get us back flying CRS missions out of Virginia,” said Eberly. 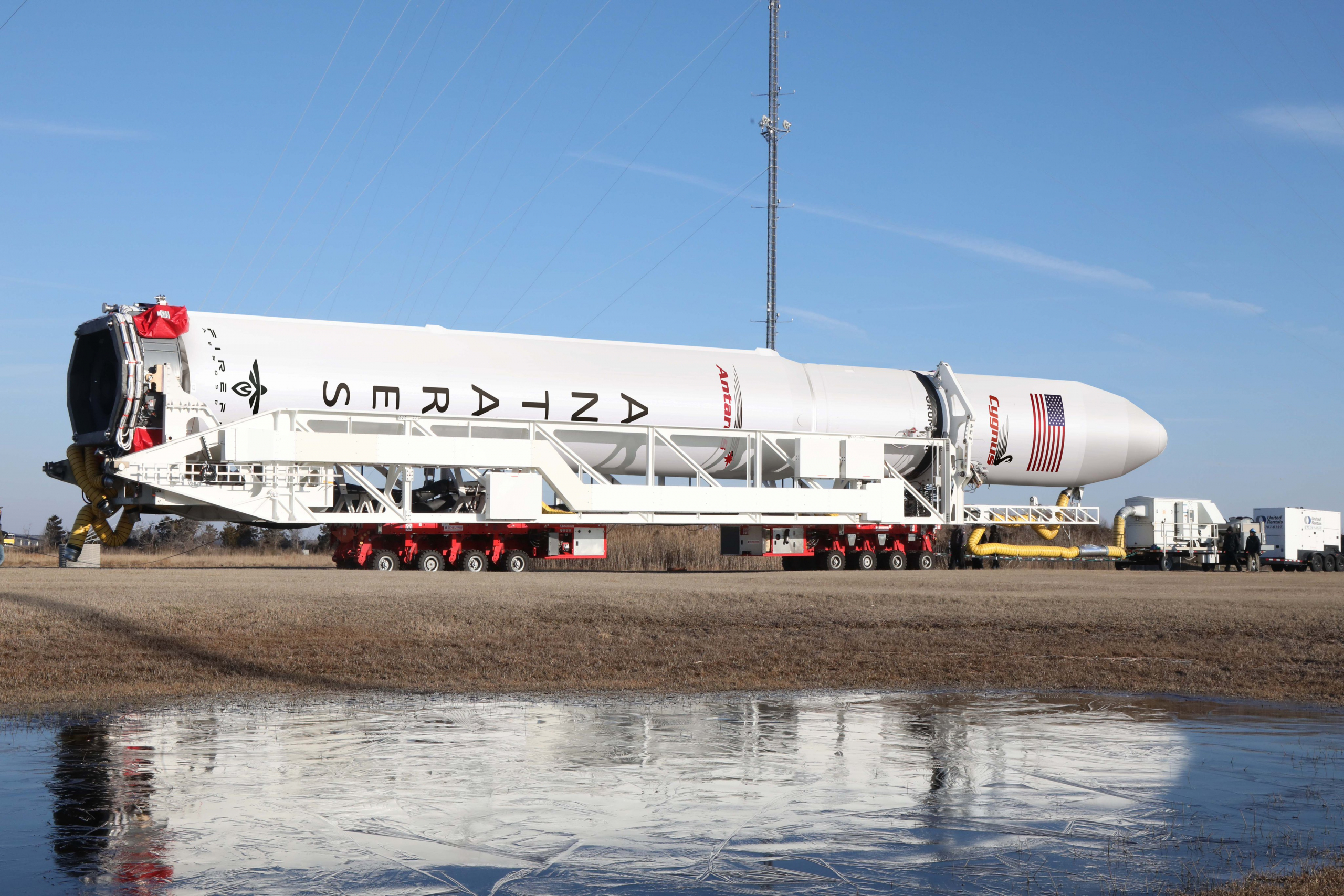 A render of the Antares 330. (Credit: Northrop Grumman)

The Antares 330 will consist of the same Castor 30XL upper stage that is currently used on Antares, but the first stage will be developed by Firefly Aerospace and will be similar to their Medium Launch Vehicle (MLV) rocket which is also in development. The first stage will be powered by seven Miranda engines.

“We’re working very hard with Firefly on development of that first stage that’s going to form the basis of the Antares 330. And the employees we have here at Wallops, we intend to keep all of them. So we’re putting them to work on helping us develop that new stage as well as our employees back in Dulles, Virginia, and back in Chandler, Arizona,” said Eberly.

Also, modifications will have to be made to the existing infrastructure on Wallops Island.

“We’ve got to adjust the ground support equipment inside the HIF, we’ve got to make the transporter erector launcher bigger, and then we’re also working with Virginia Space to scope out the pad modifications that we’re going to need for this new configuration of the rocket,” said Eberly.

“It’s going to have significantly more thrust, can be a little bit bigger diameter, it’s going to be longer. So all those things are going to conspire to require that we add capability to the launch pad. And so that’s in the works as well.”

The Antares 330 will also facilitate some new modifications to upgrade the Cygnus spacecraft as well.

Along with the Antares 330, Northrop Grumman and Firefly Aerospace are developing a new launch vehicle that will be entirely domestically built and will be available for the NASA, commercial, and national security markets.

“We’re going to then take that same first stage for the Antares 330 and then we’re going to develop with Firefly a new liquid second stage with a bigger fairing,” said Eberly.

“We are calling it the medium launch, and we’re gonna go through a naming contest internally with our employees here… both us and Firefly. We’ll see who wins. But that capability we’re targeting for debut in late 2025. We think that’s really going to be a powerful competitor.”