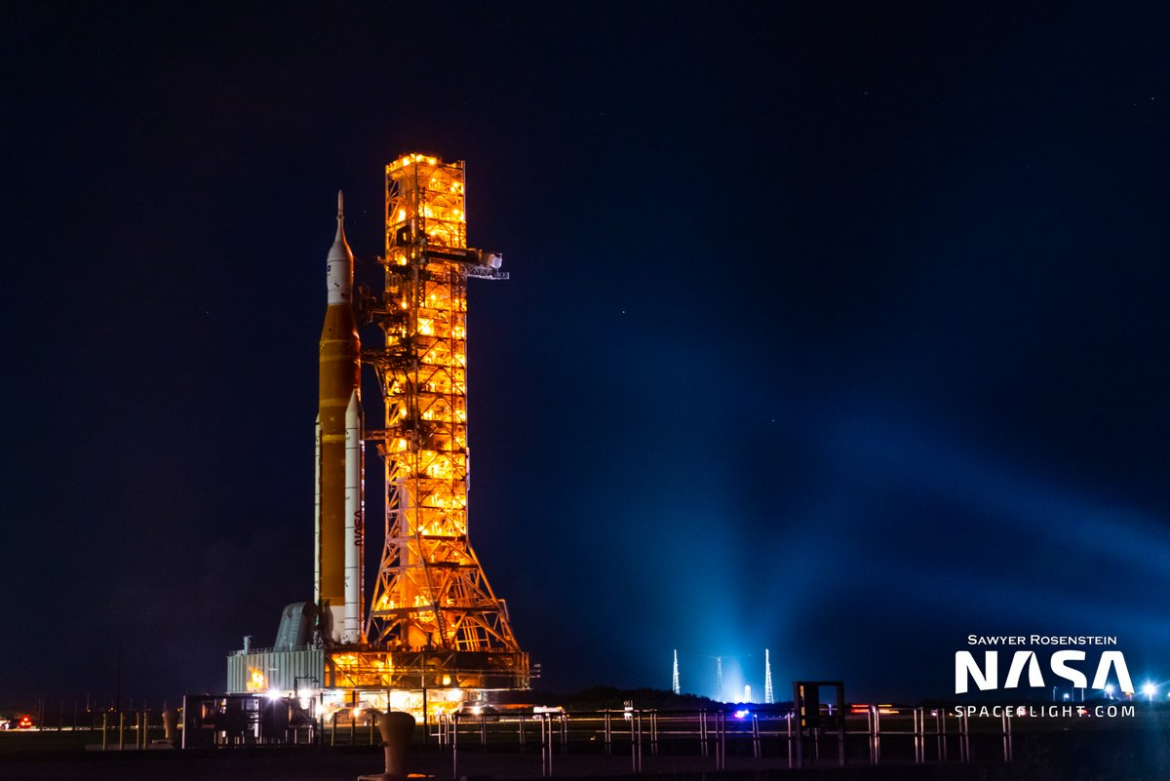 The first Space Launch System (SLS) rocket made the 6.7 km trip from High Bay 3 in the Vehicle Assembly Building (VAB) back out to Launch Complex 39B Thursday night into Friday morning. The move follows a five-week stay in the VAB to shelter from Hurricane Ian and allow teams to prepare the vehicle for its next launch attempt.

After the first two launch attempts for the Artemis I mission were scrubbed on Aug. 29 and Sept. 3, NASA and the US Space Force were working toward extending the certification of Flight Termination System (FTS) batteries to support a next launch attempt as early as Sept. 27.

However, thanks to Hurricane Ian, the teams instead spent that day rolling the Artemis I stack on Crawler-Transporter 2 and the Mobile Launcher (ML) back to the VAB.

With the vehicle back in High Bay 3, teams took the opportunity to replace and retest the FTS batteries for the November launch period. In addition to those on the FTS, batteries on the secondary payloads carried by the Orion stage adapter were recharged.

Teams also attended to several instruments and investigations on Orion, including recharging and/or replacing radiation instruments and the crew seat accelerometer. Additional checkouts for the space biology payload on board and other Orion and Launch Abort System (LAS) elements will occur at the pad before launch.

The rest of the SLS vehicle also received minor repairs for any defects noticed during inspections after the vehicle returned to the VAB. The flight batteries on both Solid Rocket Boosters (SRBs) have been tested and verified to be ready for flight, and teams completed all of the pre-rollout checks on the interim cryogenic propulsion stage (ICPS), launch vehicle stage adapter (LVSA), and the core stage forward skirt.

The core stage intertank and SRB forward assemblies were not closed out until after FTS testing was completed earlier this week.

Outside of FTS work, refreshing science investigations, and other standard repairs and checkouts, perhaps the highest profile work was to mitigate the issues which caused the latest scrubbed launch attempt on Sept. 3. While the fueling test conducted on Sept. 21 did gain some confidence in the fixes for the liquid hydrogen leak that prevented core stage fueling on launch day, the test did not go off without a hitch. 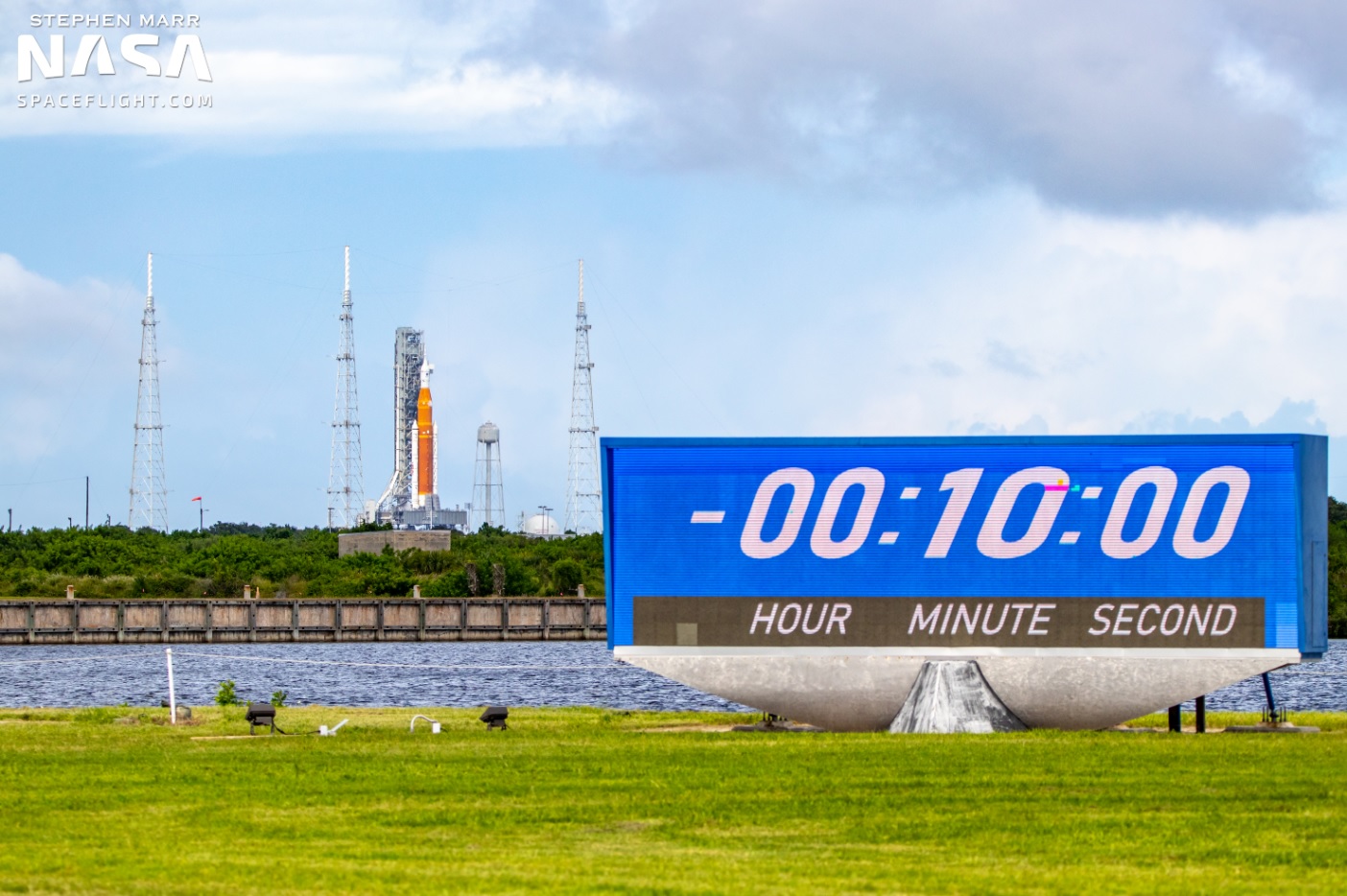 SLS at the conclusion of fueling tests in September 2022. (Credit: Stephen Marr for NSF)

Furthermore, the root cause of the leak has still not yet been determined, according to NASA’s Assistant Deputy Associate Administrator for Exploration Systems Development Amit Kshatriya. During a meeting of the NASA Advisory Council’s Human Exploration and Operations (HEO) committee meeting on Oct. 31, Kshatriya said that some branches of the fault tree remain open, but that teams would move forward into the next launch attempt with mitigations in place.

In preparation for rollout, all of the work platforms inside High Bay 3 were retracted from the vehicle. Platform F, which is used to access the intertank and SRB forward assemblies, was retracted last.

Meanwhile, Crawler-Transporter 2 was moved from the crawler yard to outside High Bay 3 on the morning of Nov. 1. By Nov. 2, the crawler had moved into its position underneath the mobile launcher.

Before the journey back to LC-39B began, the crawler raised itself to lift SLS and the ML off of the pedestals inside High Bay 3, known as “jacking.” Once the crawler was bearing the weight of the rocket and launch platform, rollout from the high bay out onto the crawlerway began at 11:16 PM EDT on Nov. 3 (03:16 UTC on Nov. 4), ahead of the original schedule of 12:01 AM EDT (04:01 UTC). 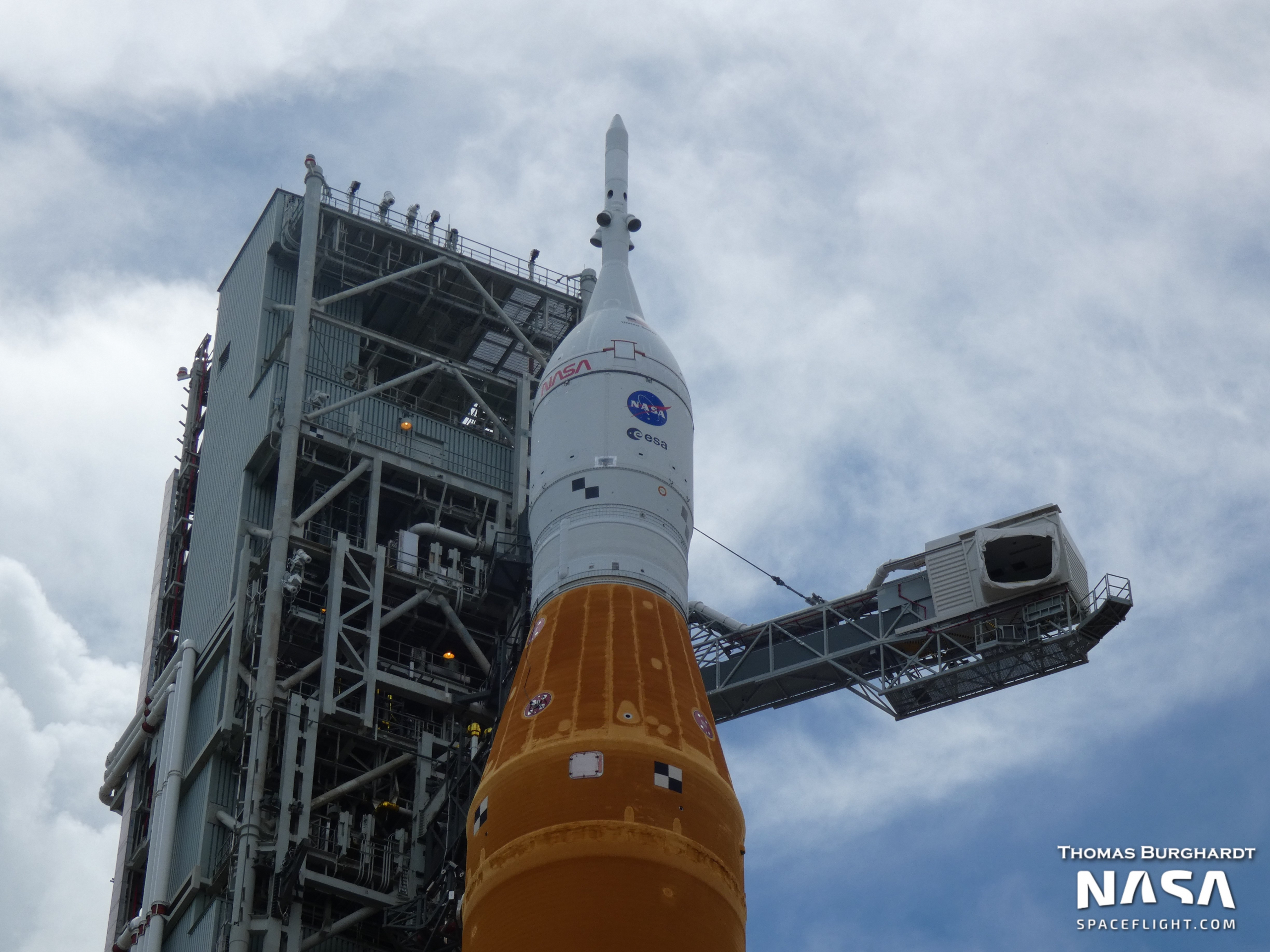 The Crew Access Arm is swung back into place before SLS re-enters the VAB after Wet Dress Rehearsals in July 2022. (Credit: Thomas Burghardt for NSF)

Once the stack cleared the VAB entirely, the rollout paused for several minutes while the Crew Access Arm (CAA) was retracted from the rocket. While the CAA is kept extended toward Orion in the VAB, the arm is retracted for the majority of the rollout for the minor but not negligible change in the location of the combined stack’s center of mass.

With the CAA retracted, the stack made the trek down the rest of the crawlerway, making a left turn at the fork to arrive at 39B rather than the adjacent 39A. The crawler keeps the entire stack level as it climbs the ramp to place SLS and the ML on the launch pad.

With the mobile launcher “hard down” at LC-39B, teams will now begin the work to connect ground support systems and prepare the vehicle for launch.

While you were sleeping, SLS began the journey back to LC-39B ahead of the next launch window that opens Nov. 14th. @NASASpaceflight rollout replay:https://t.co/gZmrXEScUx
Article; https://t.co/VEqpEEGCpq pic.twitter.com/HSfsi9x4rx

The first Artemis I launch window in November opens at 12:07 AM EST (05:07 UTC) on Monday, Nov. 14, lasting 69 minutes. While previous launch attempts were scheduled for daylight hours, which would improve imagery captured during flight, NASA’s Associate Administrator for Exploration Systems Development Jim Free has stated that the agency is “comfortable with the imagery we have” and can move forward with the nighttime launch windows this month.

This first launch window would set up a 25-day mission culminating in Orion splashing down in the Pacific Ocean on Dec. 9.