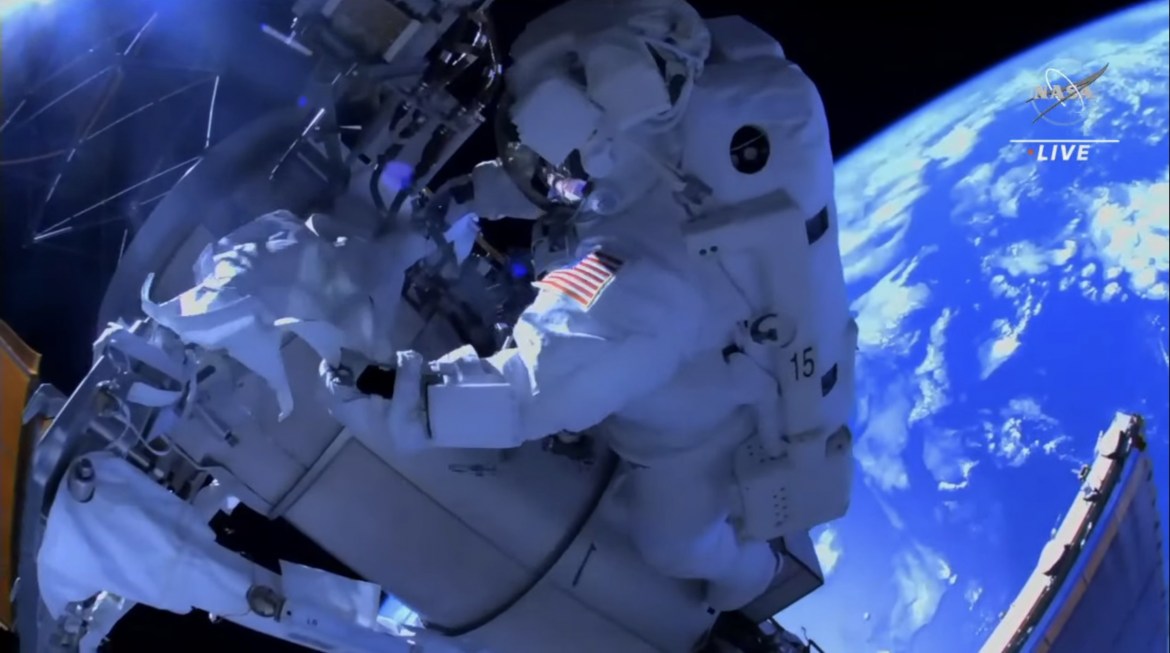 NASA conducted its Extravehicular Activity, or EVA (colloquially referred to as a spacewalk), on Tuesday, Nov. 15 on the International Space Station (ISS), with China following on Nov. 17 outside their Tiangong Space Station (TSS). Roscosmos rounded out the hat trick later on Nov. 17 back at the ISS.

NASA astronauts Josh Cassada and Frank Rubio conducted the first of a series of planned NASA spacewalks on Nov. 15 to prepare the ISS for another iROSA (ISS Roll Out Solar Array).

This was the first spacewalk from the US Orbital Segment (USOS) of the ISS since March 23. During US EVA 80 in March, water was found in the helmet of ESA astronaut Matthias Maurer, and NASA postponed all future spacewalks until the issue was understood and resolved.

US EVA 81 began at 14:14 UTC on Nov. 15 when both astronauts transitioned their suits to battery power. The spacewalk concluded at 21:25 UTC. Both astronauts egressed and ingressed via the Quest Joint Airlock.

Cassada and Rubio completed most of the assigned objectives to assemble a mounting bracket on the starboard truss segment of the ISS. This mounting bracket is where the next iROSA will be installed.

The 1B power channel modification kit includes the mounting bracket the new iROSA will be mounted to on the base of the existing solar arrays. The iROSAs are being installed to enhance the available power on the station as the original truss-mounted arrays have degraded over time, as expected.

The placement of the six new iROSAs over the existing ISS solar arrays. (Credit: NASA/Boeing)

The first two iROSAs for the ISS were delivered in 2021 during the SpaceX CRS-22 mission. A total of six iROSAs are planned. So far, two have been installed. The next two planned US spacewalks will install the third and fourth iROSAs.

Elsewhere in LEO, on the Tiangong Space Station, two taikonauts exited the Wentian module’s airlock at 03:16 UTC on Nov, 17 to begin a spacewalk to install handrails and exterior mobility aids around the three modules of the TSS.

Shenzhou-14 crewmembers Chen Dong and Cai Xuzhe performed the spacewalk from the Wentian module’s airlock, with Liu Yang serving as the IVA (Intravehicular Activity) officer, coordinating movements and commands between the ground and two spacewalking taikonauts.

To access needed portions of the TSS for this spacewalk, control teams attached the two robotic arms from the Tianhe and Wentian modules to form a long, 15-meter arm.

After exiting the airlock, Dong and Xuzhe worked to install connection bridges between the three modules – Tianhe, Wentian, and Mengtian. These bridges and handheld rails will assist future taikonauts as they maneuver outside the TSS. 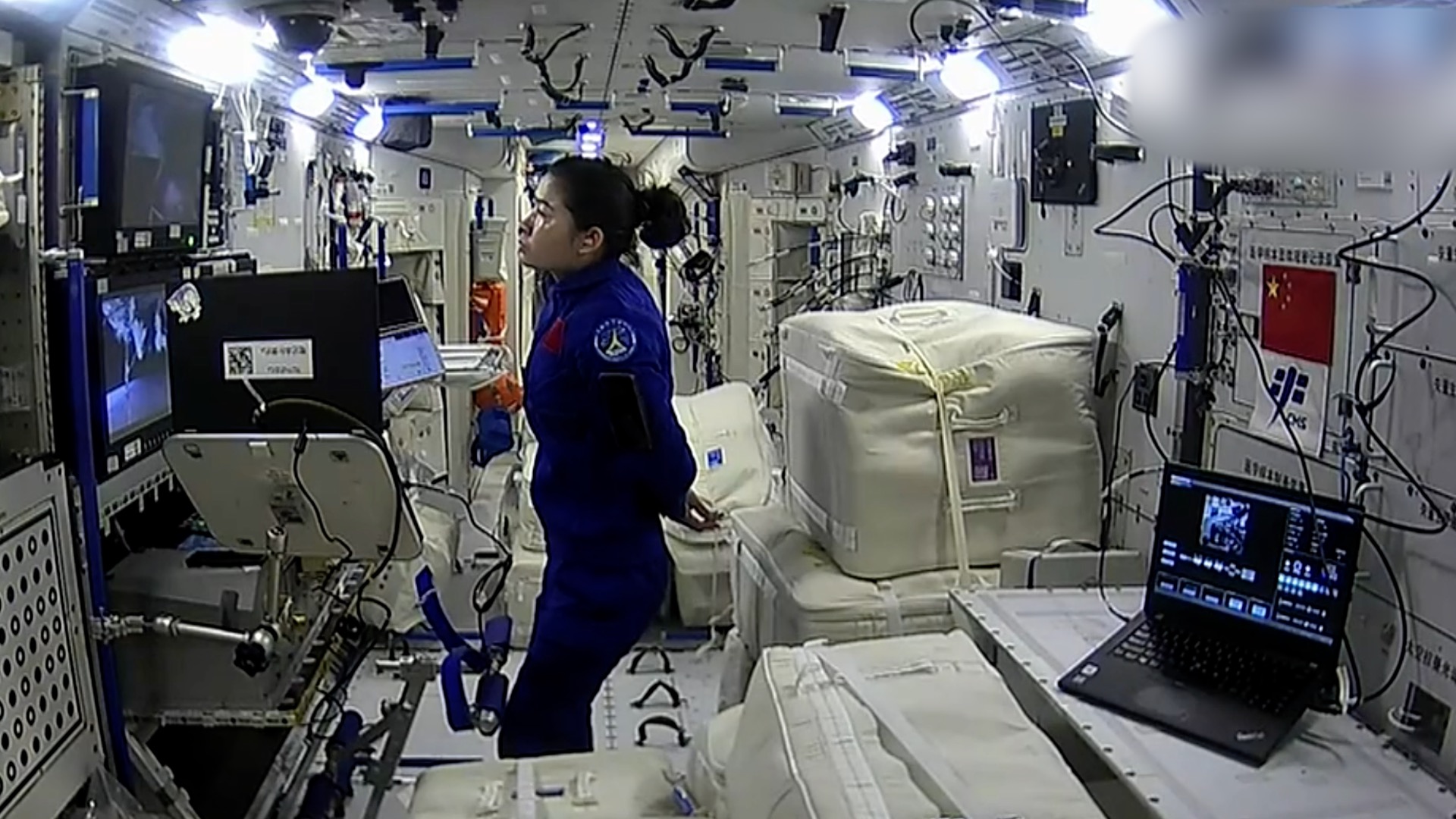 The taikonauts also moved a panoramic camera outside the Wentian module and added a handle on the robotic arm before concluding the EVA at 08:50 UTC. This was the seventh EVA in support of the construction and outfitting of the TSS.

Closing out the busy spacewalking week, Russian ISS EVA 55 began at 14:39 UTC on Nov. 17, less than six hours after the conclusion of the Chinese spacewalk outside Tiangong.

The first task after exiting the MRM-2 Poisk airlock was to translate along the Strela-2 boom, which was previously extended to create a bridge between Poisk and the forward end of the Zarya module.

The duo translated to the MRM-1 Rassvet module, where an airlock (ShK) and radiator (RTOd) for the MLM Nauka module are stored. These elements were launched to the ISS back in 2010 on STS-132 and waited 11 years on orbit for the Nauka module’s arrival and more than a year after that before their preparation for installation.

Over the next series of Russian spacewalks, this airlock and the radiator for Nauka will be relocated to and installed on the new module.

To start this task, the spacewalkers installed a European Robotic Arm (ERA) adaptor onto the Flight Releasable Grapple Fixture (FRGF) on the airlock. The FRGF was last used by the Space Shuttle’s robot arm (Canadarm) and the Space Station Remote Manipulator System (SSRMS, or Canadarm2) in 2010 when MRM-1 was delivered to the ISS by the Space Shuttle Atlantis.

The ERA adaptor needed to be attached to the new airlock as the ERA end effector grapple is different from those on the SSRMS. The adaptor will allow the ERA to move the new airlock to its proper location on Nauka and then serve as a port and base of operations for the arm.

The spacewalkers then moved to the Nauka radiator on Rassvet and removed a total of six launch restraints. They also opened valves to vent nitrogen pressure from the radiator’s hydraulic loops.

Cosmonauts work at the Rassvet module on the Earth-facing side of the station with the Soyuz MS-22 spacecraft seen at the top of the screen. They are currently identifying and releasing launch restraints for the radiator that will be relocated on the next spacewalk on Nov. 25. pic.twitter.com/5Or7pqgaEx

The crew then translated back along the Strela-2 boom toward Poisk, stopping at the end of the boom to install a retainer. They then retrieved more stowage bags from inside Poisk and translated to the rear side of the Nauka module.

There, they installed the large object attachment system (SKKO) onto the rear side of Nauka in the location where the ERA had been stowed for launch. The SKKO was unfolded in four segments and attached to Nauka, whereupon two adapter panels and one receiving panel were installed onto it.

This hardware forms a structural frame that will allow for the mounting of larger or higher mass payloads onto the outside of Nauka.

The pair then translated back up to Poisk and ingressed, concluding the EVA at 21:07 UTC.