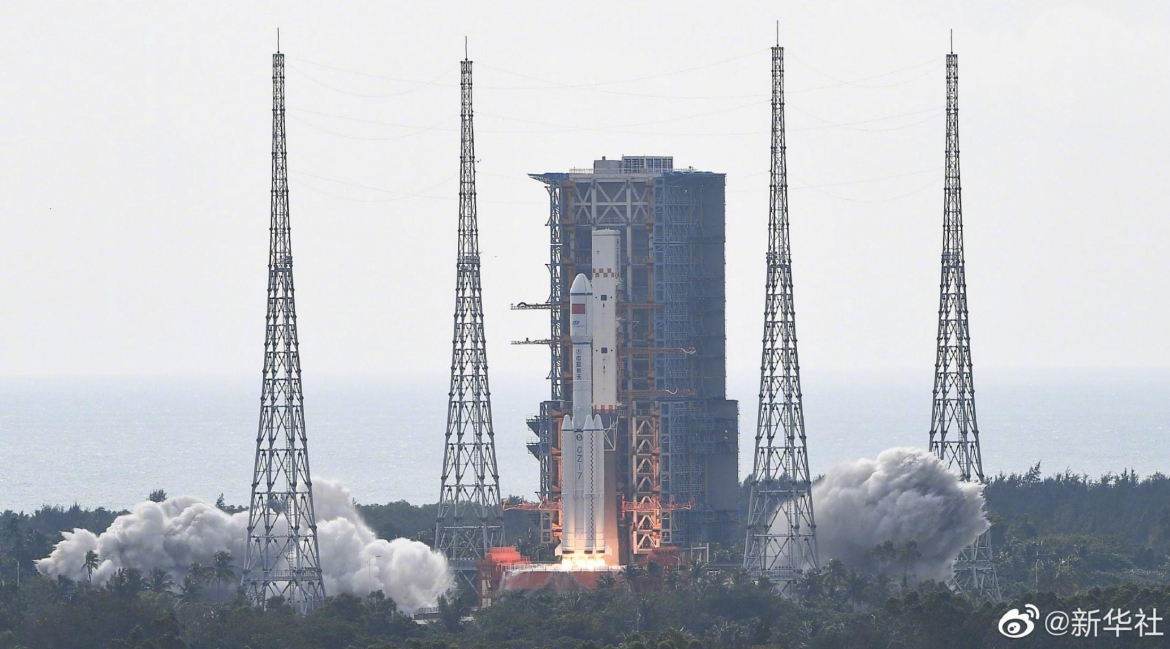 Recently, the Tiangong Space Station has been busy, as the Mengtian laboratory module was docked to the station. With this, based on the initial plans for the station, the station is fully assembled. The Tianzhou spacecraft for today´s mission docked at the aft end of the Tianhe module.

The Tianzhou automated cargo spacecraft is used to resupply the space station with needed cargo to support the operation of the station, similar to the Cygnus, Cargo Dragon, and Progress vehicles which resupply the International Space Station (ISS). 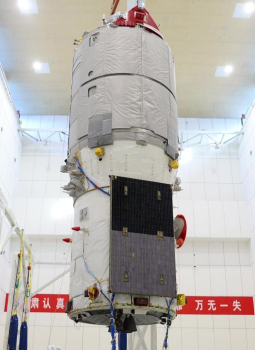 Tianzhou is a derived spacecraft, based on the Tiangong-1 space station. The craft consists of two major components: the cargo module, which has a space of up to 15 cubic meters for research projects, food, water, and more, and the service module, which hosts the capsule’s flight control and propulsion.

The launch mass of the module is up to 13.5 tons with an internal payload capacity of up to 6.5 tons. The whole system is 10.6 meters long and has a diameter of 3.35 meters.

This cargo will be used to support the Shenzhou-15 mission, which is planned to launch on Nov. 29, 2022. The current crew of the station, under the leadership of crew commander Chen Dong, will stay in space until December, before returning to Earth on the Shenzhou spacecraft. The crew for the Shenzhou-15 mission has not been announced yet but will feature three taikonauts from the People’s Liberation Army Astronaut Corps (PLAAC).

The payload for this mission included the Macao Student Science Satellite No.1, developed by the China Aerospace Science and Technology Corporation (CASC). It will be deployed from Tianzhou-5 at a later date. The spacecraft features four more CubeSat payloads, including the Sheng Xi Jishu Yanzheng Lianxing payload, which will be used to study tether mechanisms in space. Another payload is the Zhixing-3A satellite, which the Shaanxi Smart Satellite GmbH will use as an SAR satellite.

Besides that, it also features more experiments to be conducted at the station. This includes an experimental hydrogen-oxygen fuel cell, a 3D-printed cancer model, and detectors to warn of approaching objects to the station, such as space debris.

All the payloads receive power from the spacecraft, which can output up to 100 V to support the experiments. The science projects were announced in March 2022 and had to be given to CASC three months before launch.

The launch vehicle for the mission was the Chang Zheng 7. It is one of the newer launch vehicles in the Chinese fleet, and in contrast to older rockets, uses RP-1 kerosene as its fuel.

It is one of the most capable rockets in the Chang Zheng family with a payload capacity to low Earth orbit (LEO) of up to 13,500 kg, and a geostationary transfer orbit (GTO) capability of up to 7,000 kg.

At liftoff, the rocket has a mass of 597,000 kg and stands 53.1 meters tall with a diameter of 3.35 meters of the center core. The four side-mounted boosters are 2.25 meters in diameter each and are mounted to the first stage of the rocket.

Down the line, this rocket is designed to replace the Chang Zheng-2F, which is also reflected in its early development name. Initially, the rocket was called Chang Zheng 2F/H, before later being renamed to Chang Zheng 7.

During first stage flight, the rocket is powered by two YF-100 engines on the center core, and one YF-100 on each of the side boosters. This brings the rocket’s thrust to 7,200 kN at liftoff, which is very close to the liftoff thrust of a Falcon 9 at 7,600 kN. The engine itself has an efficiency (specific impulse) of 300 seconds.

The second stage is powered by four YF-115 engines with a combined thrust of 706 kN. It runs on the same mix of RP-1 and LOX as the first stage and operates on a specific impulse of 341.5 seconds in a vacuum environment.

CZ-7 debuted in June 2016 on a mission to launch a next-generation crew capsule model. The base version so far is without any failures. The 7A version, which features an additional hydrogen third stage, had a failure in March 2020, where one of the side boosters likely failed on the XHY-6-01 mission. 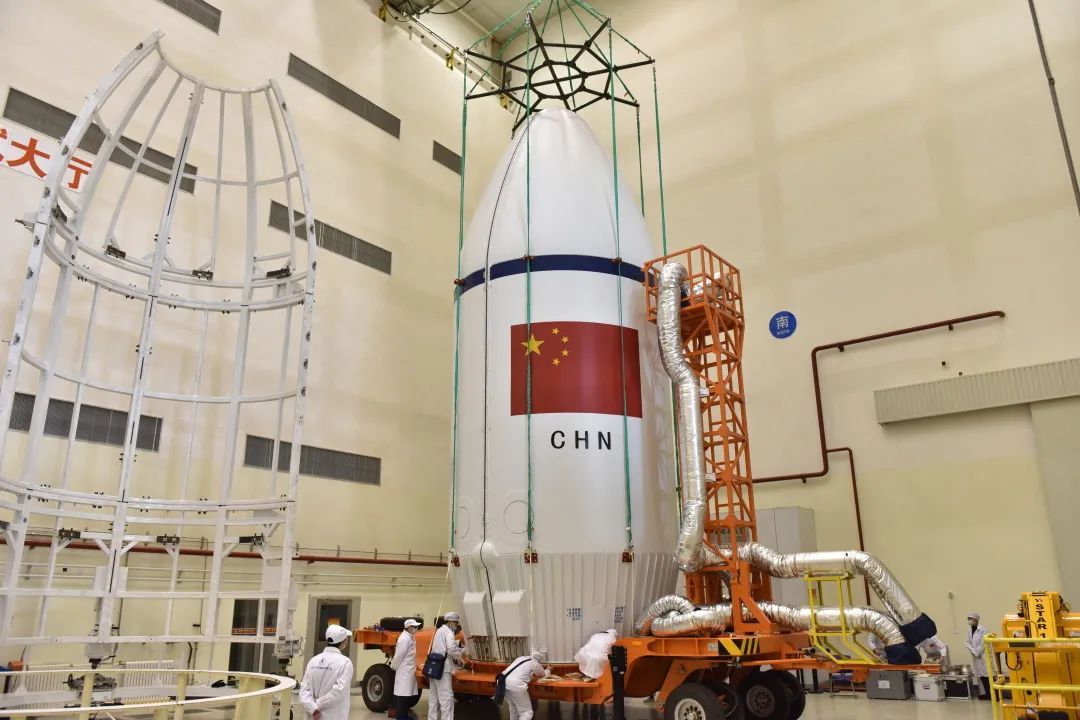 The Yunhai-3 payload inside the payload fairing. (Credit: CNSA)

Less than four hours before the Tianzhou-5 mission, a Chang Zheng 6A was launched from Taiyuan. The payload for this mission was the Yunhai-3 satellite, which will conduct atmospheric and environmental research. Yunhai-3 went to a Sun-synchronous orbit (SSO) and further details about the payload were not released. The mission was confirmed a success.

As a launch vehicle, the Chang Zheng 6A was used. This was only the second flight of the rocket, which performed its debut launch in March 2022. 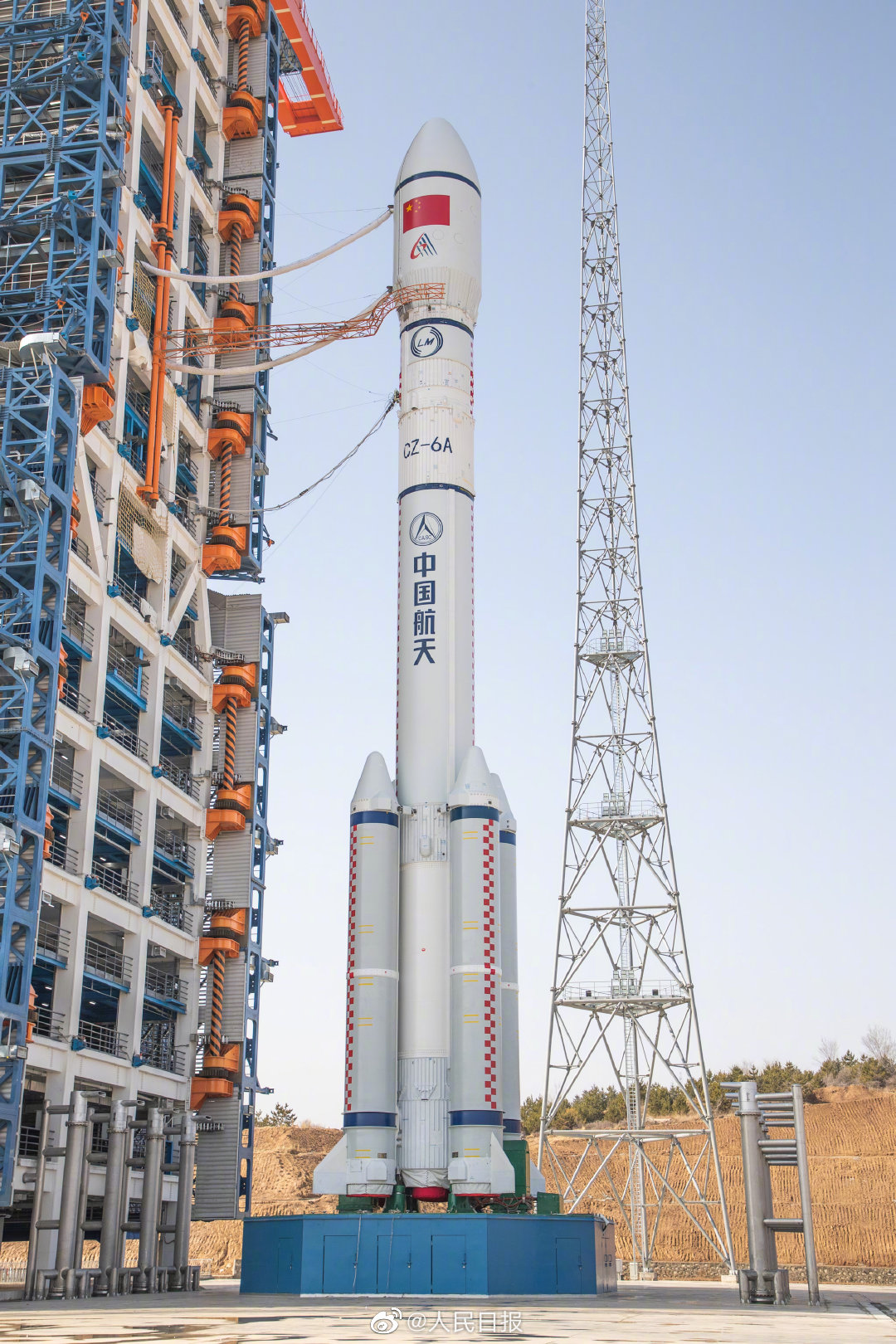 Chang Zheng 6A ahead of liftoff (Credit: CNSA)

The rocket features two stages and has some loose connections to the Chang Zheng 6. However, this rocket is upgraded to be more capable and thus larger. It can lift up to five metric tons into a polar orbit and will mainly be used as an SSO launcher for the large number of imagery satellites that are launched by China each year.

It is 50 meters tall with a core diameter of 3.35 meters and a liftoff mass of 530,000 kg. Down the line, additional variants of this rocket may be made, such as a version that will feature fewer solid rocket boosters or three of the main cores of the rocket.

The rocket is powered by the same engines as the CZ-7 during first-stage flight. It features two of the YF-100 engines on the first stage. In addition to that, it also features SRBs. The four SRBs together have a liftoff thrust of 4,828 kN and combined with the first stage bring the thrust at liftoff to 7,204 kN.

As a second-stage engine, a single YF-115 is used, which has a thrust of 180 kN. It is used for a long-duration burn to bring the payload to the desired SSO orbit, before separating from the payload.

These were flights 50 and 51 from China this year. China is only five more launches away to equal the 2021 record of launches, which was 56. If the current pace and rumored manifests hold, this has a high chance of happening.

(Lead image: CZ-7 lifts off on its mission. Credit: CNSA)