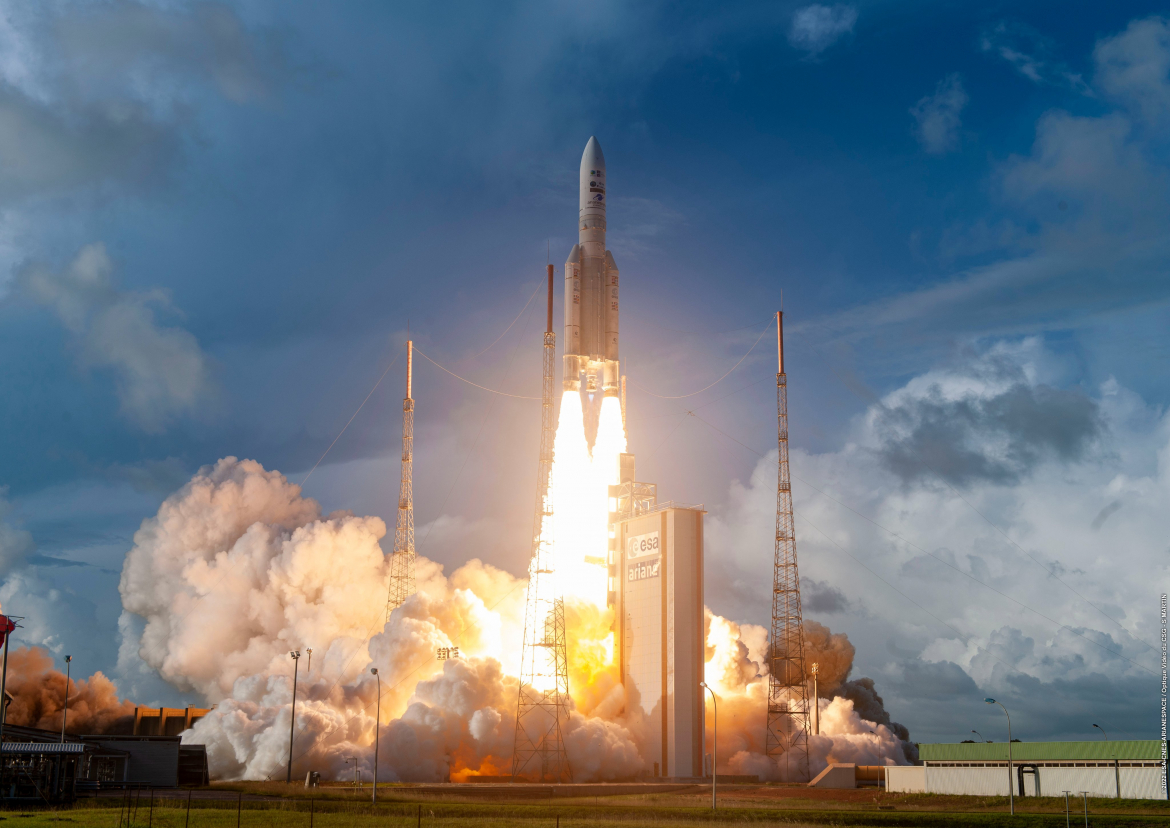 Liftoff occurred at the opening of a 106-minute long window that extends from 20:30-22:16 UTC. The mission delivered an advanced European meteorological satellite and two Galaxy telecommunications satellites for Intelsat into orbit.

Riding in the upper passenger position for this mission were the Galaxy 35 & 36 C-band satellites for Intelsat.

“Those satellites were due for replacement,” said Jean-Luc Froeliger, Senior Vice President of Space Systems at Intelsat in an interview with NASASpaceflight. “Those satellites are running out of fuel in the next few months, so we had to replace them because of their end of lifetime.”

To this point, while the satellites are part of the ongoing C-band replacement to meet the US regulatory deadline of Dec. 5, 2023, to clear a portion of the C-band range for 5G communications, they were planned for this time anyway as Galaxy 3C and 28 are at the end of their planned operational lives.

Knowing the likely Federal Communications Commission (FCC) decision on C-band reallocation allowed Intelsat and its build partners at Maxar and Northrop Grumman to plan for the new frequencies.

“We didn’t wait for the FCC formal decision. Because we were discussing this with the FCC, we knew this was coming. So we proactively designed the satellites,” added Froeliger.

“We even gave the satellite manufacturers … ATP authorization to proceed, and we gave them a little bit of money, at risk, for them to get a head start. And once we got the formal FCC approval, then we converted this into a formal contract.” 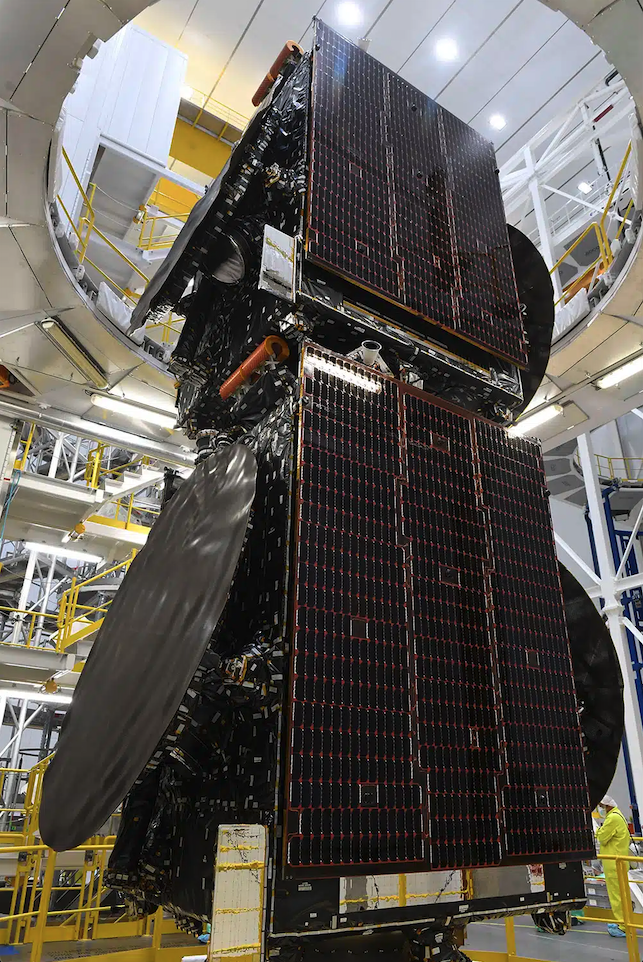 The Galaxy 35 and 36 satellites, stacked for launch ahead of encapsulation. (Credit: Arianespace)

Putting the plans for Galaxy 35 and 36 into place just as the COVID-19 pandemic began in 2020 caused stress and challenges during the build process, as did the industry-wide issue with reaction wheels from Honeywell.

“Everybody had to send their wheels back to Honeywell to have them reworked,” said Froeliger. “So Galaxy 35 and 36, we actually got our reaction wheels like a month ago, when typically you have them a year in advance.”

“And we were monitoring those reaction wheels at Honeywell on a daily basis.”

A week of in-orbit satellite bus testing will follow, with another two weeks of on-orbit payload tests thereafter. This overall five-week period of post-launch activations and checkouts will allow Intelsat to accept the satellites for service.

Acceptance tests are usually performed on-station at the geostationary orbit location assigned to the satellite for its primary operations; however, the crowded North American market sometime prevents this.

“Because the North American arc is extremely crowded for C-band frequencies, it’s hard to find a location close to your final location; there’s always another satellite there, so you cannot test it there,” related Froeliger.

Galaxy 35 and 36 will instead undergo testing in the 148-degree west location near Hawaii, a less crowded market for testing.

After acceptance testing, the satellites will then have to drift in the geostationary belt to their final operational locations.

“It’s going to take several weeks to drift to the final location,” said Froeliger. “I think we’re looking at in-service dates of February and March” 2023.

Galaxy 35 and 36 are, respectively, the 63rd and 64th Intelsat payloads to be launched by Arianespace and the 69th and 70th to be built by Maxar.

Each satellite masses approximately 3.15 tonnes, for a total launch mass of 6.3 tonnes once stacked/mated together for launch.

Joining the Galaxy duo on this mission is MTG-I1, the most advanced European weather satellite to date.

The MTG system, when fully deployed, will allow European meteorologists to monitor the full life cycle of storms across Europe and Africa for the first time.

MTG-I1 will provide images of Europe and Africa every 10 minutes via its Flexible Combined Imager’s 16 spectral channels. The Lightning Imager will continuously map lightning flashes. 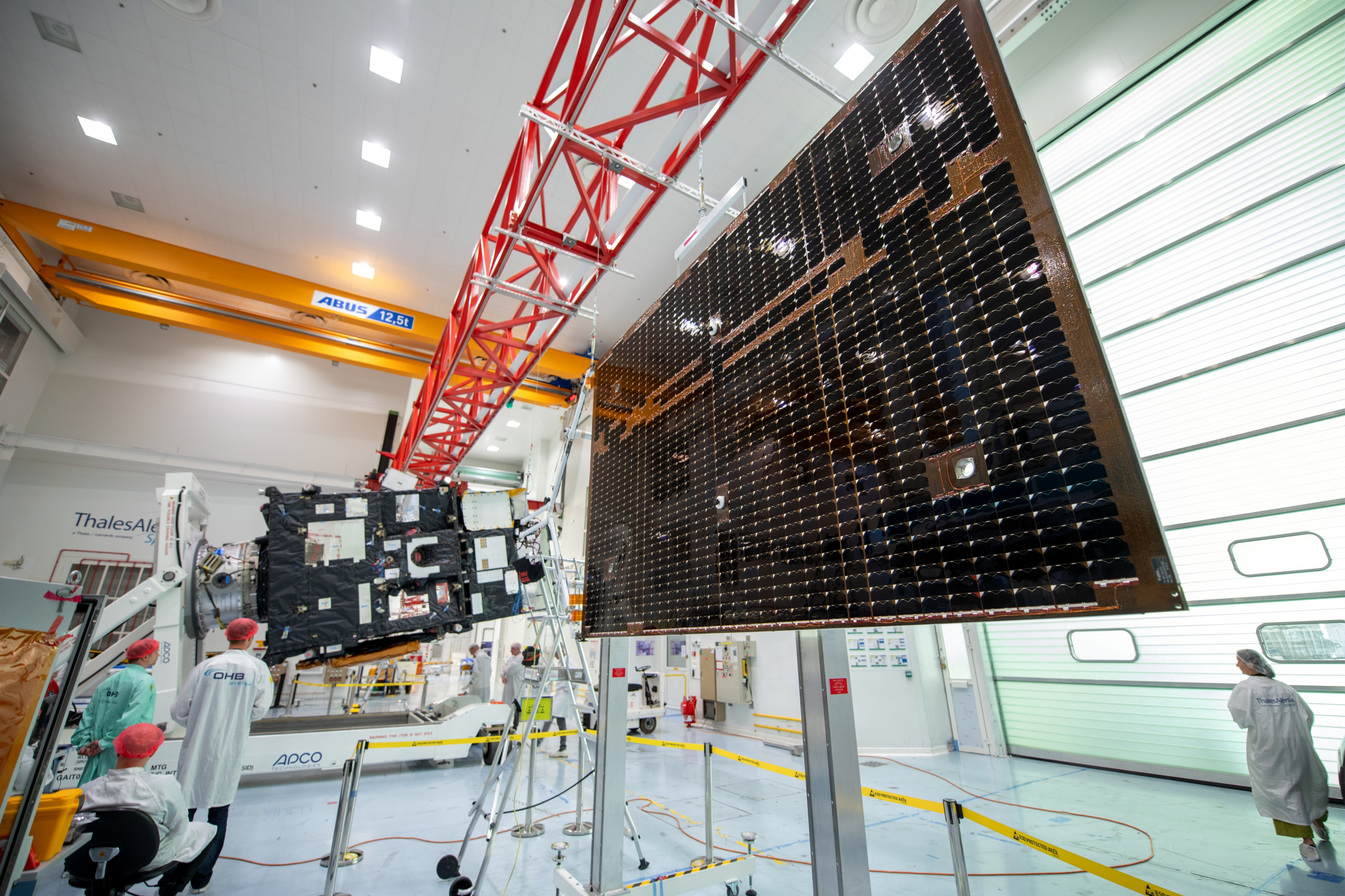 This will enable high-resolution imagery and data to be available more quickly for the region’s meteorologists and marks a significant advance in the forecasting of rapidly developing severe weather events in Europe and Africa.

Real-time disaster recovery monitoring for floods, fires, and landfalling weather systems from the Atlantic and Mediterranean will also be greatly enhanced by the MTG system.

MTG-I1 — manufactured by Thales Alenia Space — has a launch mass of 3.76 tonnes and features a planned lifetime of eight and a half years.

The satellite is the 14th EUMETSAT payload and the 167th satellite from Thales Alenia Space to be launched by Arianespace.

While construction of the rocket and planning of the mission has taken years, final integration activities for flight VA259 — as it is officially known — began on Oct. 11, 2022, with the arrival of the MTG-I1 payload.

The multi-day final integration of the Ariane 5 — including its twin solid rocket boosters, a cryogenic main stage with a single Vulcain 2 engine, and a cryogenic upper stage — began on Oct. 19 in the launcher integration building.

Teams completed rocket stacking on Oct. 23 and then moved the Ariane 5 to the final assembly building for payload integration and checkout.

The Galaxy 35 satellite arrived in French Guiana on Oct. 27, followed by Galaxy 36 on Nov. 14. Galaxy 35 underwent fueling on Nov. 8, with Galaxy 36 and MTG-I1 beginning their fueling operations on Nov. 22.

Over the first week in December, the SYLDA dual payload adaptor was integrated, Galaxy 35 and Galaxy 36 were stacked into their mated launch configuration, and all three satellites and the SYLDA adaptor were stacked and encapsulated for launch before being placed atop Ariane 5.

A mission dress rehearsal was held on Dec. 8, followed the next day by the launch readiness review that cleared the mission for flight. 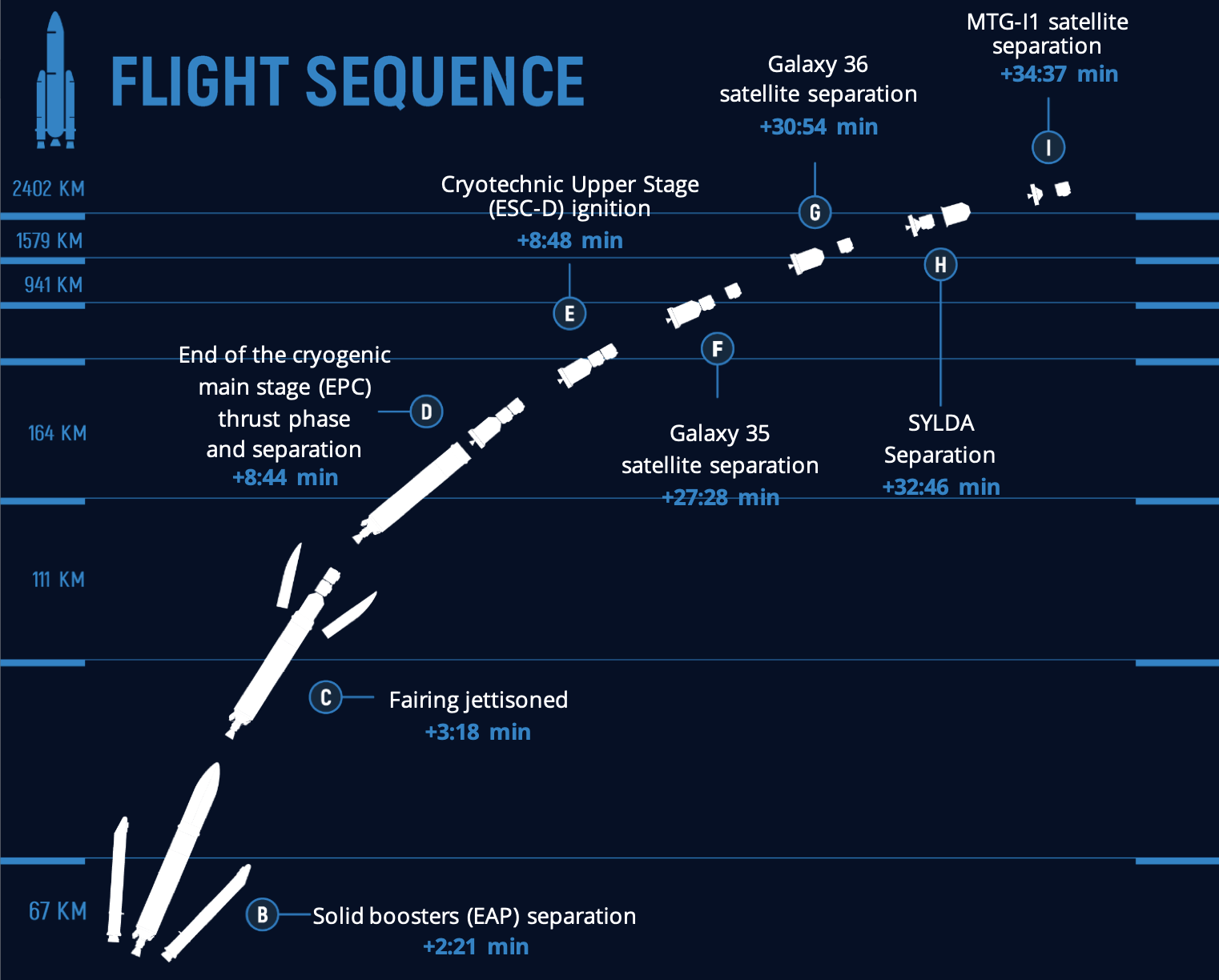 After a nearly 25-minute powered ascent into the desired geostationary transfer orbit, the payload deployment sequence began with Galaxy 35, followed by Galaxy 36, SYLDA, and MTG-I1, respectively. While SYLDA is not a payload on the mission, it must be jettisoned anyway to clear the way for MTG-I1 to separate.

MTG-I1’s separation occurred 34 minutes 37 seconds after liftoff, which concluded the mission for Arianespace.

All three satellites were delivered into the same orbital inclination of six degrees, though their specific deployment orbit targets varied slightly from each other.

This was the third and last flight of Ariane 5 this year and the launcher’s 115th mission overall.

Following this flight, two more Ariane 5 missions remain before the rocket’s retirement: the dual Syracuse-4B and Ovzon-3 mission in February 2023 and the ESA’s flagship JUICE mission to Jupiter.

JUICE, or the Jupiter Icy Moons Explorer, has a 17-day interplanetary launch window from April 14-30, 2023.