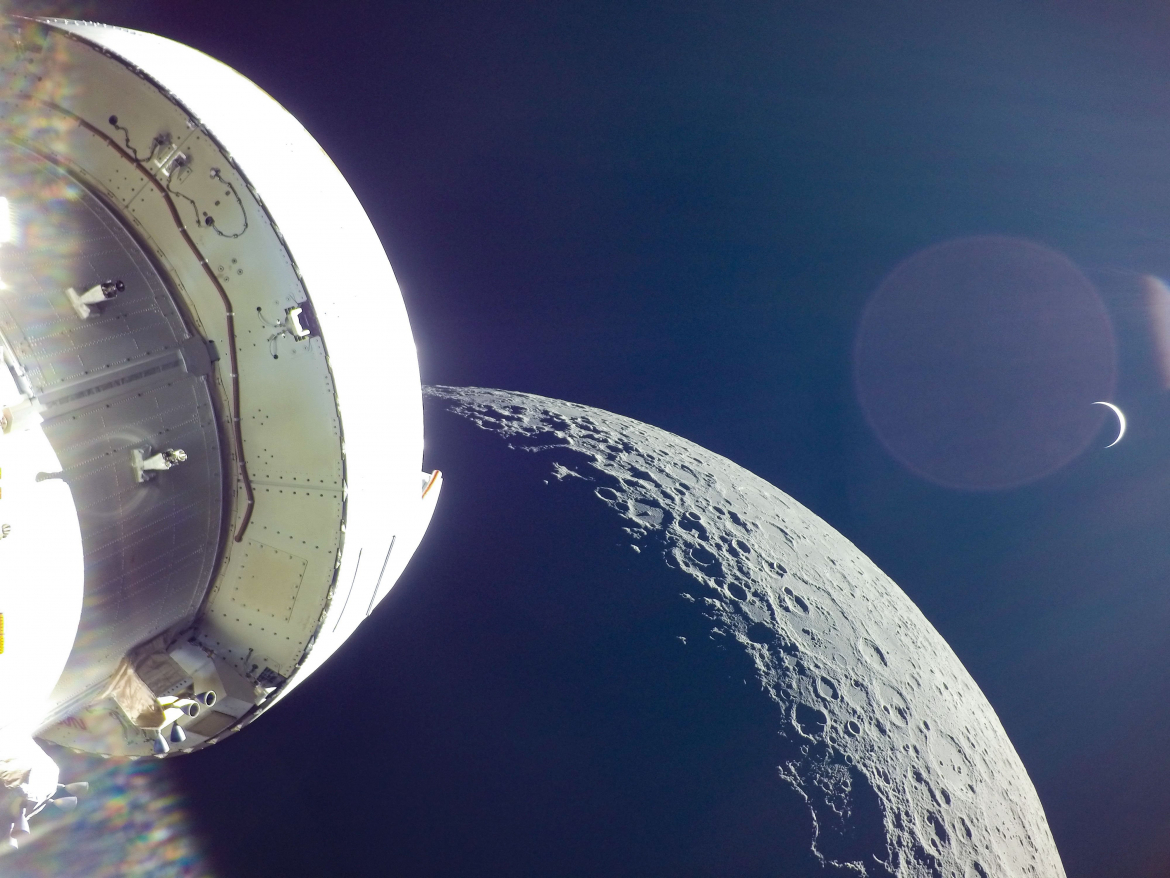 The Orion spacecraft has reached the end of its flight on the Artemis I mission, with a splashdown in the Pacific Ocean off the Baja Coast near Guadalupe Island at 12:40 PM EST (17:40 UTC) on Sunday, Dec. 11.

Final in-flight development test objectives were completed on Saturday, Dec. 10, and the fifth and penultimate return trajectory correction burn was executed to continue aligning the spacecraft for its reentry into Earth’s atmosphere at the right angle to land at the intended location.

The sixth and final return trajectory maneuver was then completed Sunday morning approximately five hours before splashdown. By this point, communications with Orion had switched from the Deep Space Network to NASA’s geostationary orbit-located Tracking and Data Relay Satellite (TDRS) network.

This separation event is a major milestone in the mission, as is Orion taking over complete attitude control at that point.

“That’s a big thing that we’re looking for first when they start service module jettison… so we can see the crew module systems takeover. Those are predominantly the propulsion and navigation systems,” said Mike Hawes, Vice President and Orion Program Manager, Lockheed Martin, in an interview with NASASpaceflight.

The overall finale to Orion’s first lunar mission will be a test of alterations made to the way the capsule’s heatshield is fabricated.

Following lessons learned from the Exploration Flight Test 1 (EFT-1) mission, for which that Orion capsule’s heatshield was one large piece, the new heatshield design is produced in segments and then combined to form a singular unit.

Overall, the heatshield is comprised of approximately 180 Avcoat ablator tiles between 2.5 and 7.5 cm (one to three inches) thick. These are capable of protecting the capsule from the 2,760 degrees C (5,000 degrees F) temperatures it experiences as it performs its reentry into the atmosphere at nearly 40,000 km/h (25,000 mph).

Getting this data is critical to ensure all the newly designed @NASA_Orion systems will provide the protection crew members need ahead of our first crewed mission on #Artemis II. (6/6)

Another ablator material is also used in other locations. Called 3DMAT, the 3-Dimensional Multifunctional Ablative Thermal Protection System is made of woven quartz in resin and is used to strengthen various “connection points along the spacecraft,” according to NASA.

After the skip profile (where Orion dips into the atmosphere, arcs back up, and then descends back down) and plasma stages of reentry, the parachute and recovery systems were then put to the test.

“Then we jettison the forward bay cover that protects all of our parachutes during the mission,” said Hawes of Lockheed Martin. “Then they (the recovery team) will track the deployment of the multiple sets of parachutes.”

“That whole interaction with the spacecraft is still really important for us to capture. We’ve done lots and lots of drop tests with these parachutes, but we haven’t done drop tests with chutes coming back from the Moon.”

After the splashdown, Orion is met by recovery personnel from the U.S. Department of Defense, including Navy amphibious specialists and engineers and technicians from the Kennedy Space Center, the Johnson Space Center, and Lockheed Martin.

Once aboard the recovery ship, Orion will be brought back to the Port of San Diego for final preparations for a quick shipment back to the Kennedy Space Center for post-flight deserving to reduce the hazards from the capsule’s onboard, stored propellants leftover from the mission.

The Capsule’s Journey After Return to Kennedy

After arriving back at the Kennedy Space Center and going through initial propellant deserving, work will begin immediately toward removing the essential items from the Artemis I capsule that are planned for reuse on the Artemis II Orion spacecraft.

“I am really focused on getting the ship out of the water and getting back on the road because of the avionics reuse between Artemis I and Artemis II,” related Hawes. “So we will be wanting to get that process going [because] we start our post-flight formal reuse reviews with the NASA team just before Christmas.” 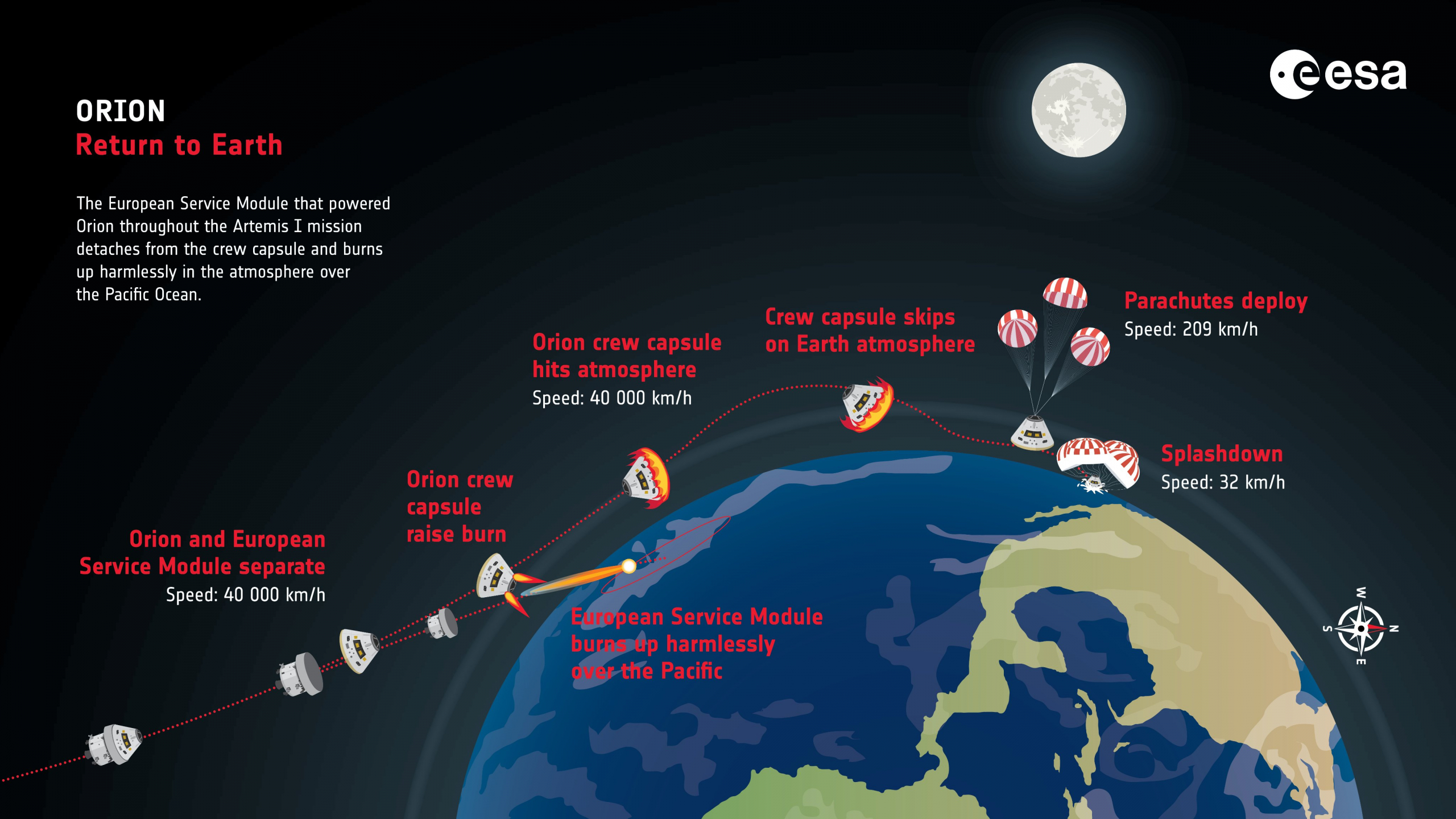 The final, critical test sequence of Artemis I. (Credit: ESA)

Teams are currently targeting a 60-day timeframe from splashdown to when the avionics boxes will be ready for installation into Artemis II’s Orion. “The team in Florida will have those right timetables given the specifics of the components, but that’s when our timetable says we want to be ready for them to be able to be installed.”

Some of those avionics will only need to be tested against benchmarks to ensure they are still functioning to specifications. Others, however, will need more extensive testing before they are certified for reuse and ready for installation.

“Fortunately, those just go across the state to Honeywell,” noted Hawes. “And so we’ve worked with the Honeywell team to make sure that we have that process all lined out so that we get from Cocoa Beach over to Tampa/St. Pete. And then that is factored into the overall timeline.”

In addition to the avionics, the capsule itself still have more tests to go before its career ends. 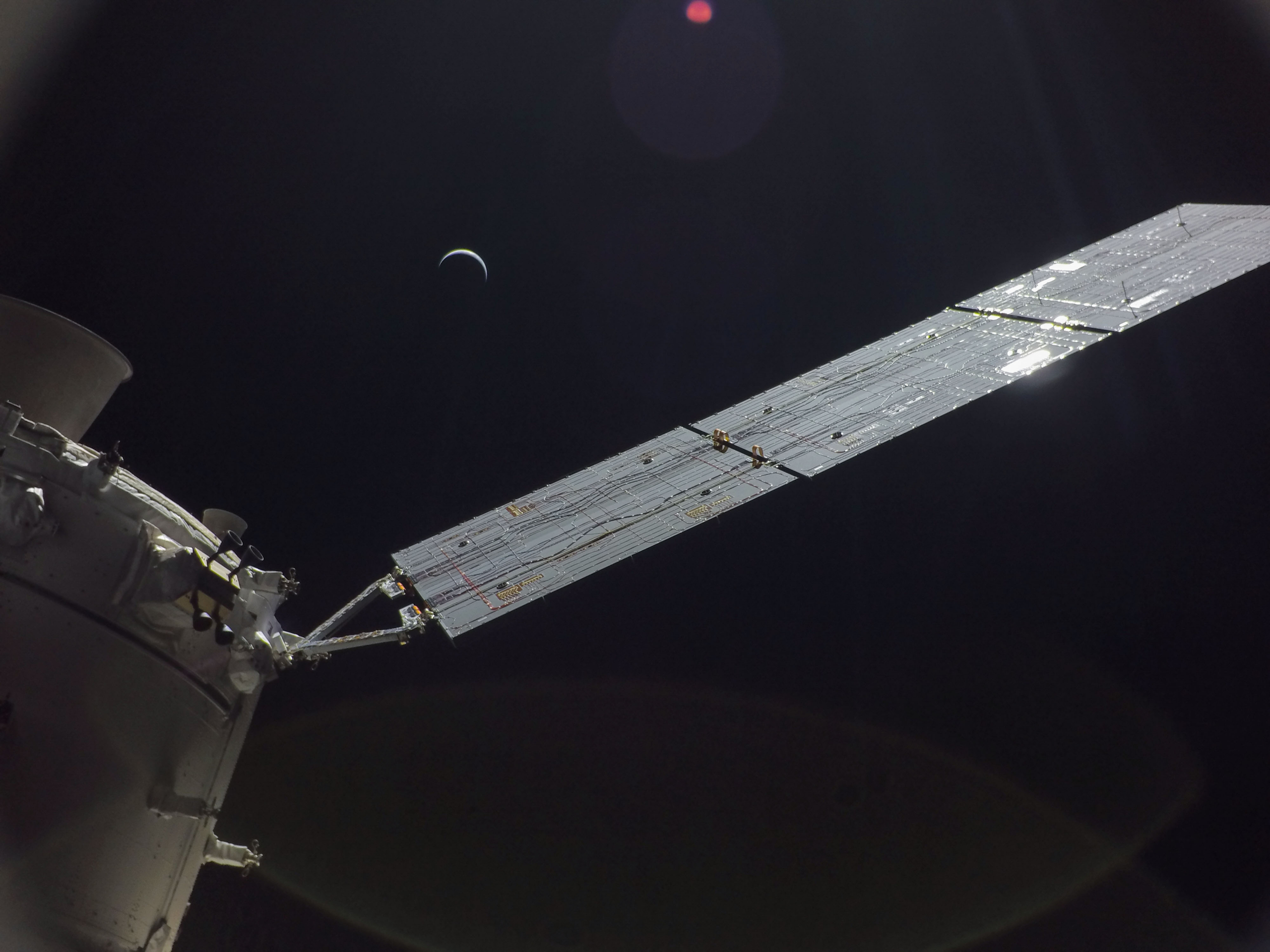 “There’s a lot of inspection from a reuse standpoint that we’re going to do,” said Hawes. “Its next use is slated for what we call the environmental test article, or ETA. And so there’s a lot of work then [to] reconfigure … for a small series of tests prior to the Artemis II flight.”

Those tests include vibration, acoustic, shock, thermal, and subsystem examinations.

(Lead image: Orion’s onboard camera views of the Moon and Earth as the spacecraft performed its “deorbit burn” to return to Earth on Dec. 5, 2022. Credit: NASA)