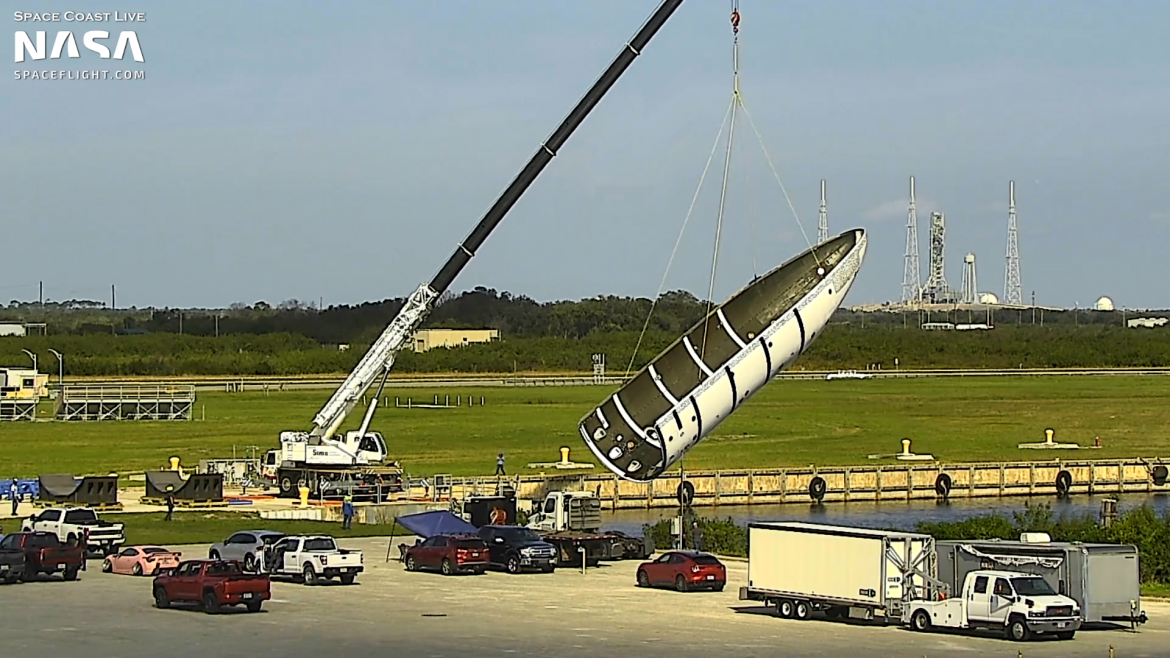 Blue Origin has quietly been making progress on its orbital New Glenn vehicle, evident by new hardware and test sightings. This progress has been made alongside the ongoing investigation into an in-flight abort of the fourth suborbital New Shepard mission of the year, which continues to keep that program grounded.

Monday morning, Blue Origin was seen testing fairings for New Glenn in the water at the Kennedy Space Center turn basin. While not publicly confirmed, this could be part of a series of tests to evaluate the possibility of reusing the fairings, similar to how SpaceX recovers and reuses Falcon 9 and Falcon Heavy fairings.

New Glenn’s payload fairings are made out of carbon composite, measure seven meters (23 feet) in diameter, and are 21.9 meters (72 feet) tall. Compared to SpaceX’s fairings, measuring 5.2 meters (17 feet) wide and 13.9 meters (45.6 feet) tall, these fairings are much larger.

While SpaceX is the only company to currently recover and reuse its payload fairings, partly due to the flight rate of the Falcon 9, it’s possible that Blue Origin could plan to attempt to recover their fairings. Blue Origin builds their fairings out of carbon composite, a pricey material, which could lead to ambitions to recover them to help with the price of a New Glenn launch. 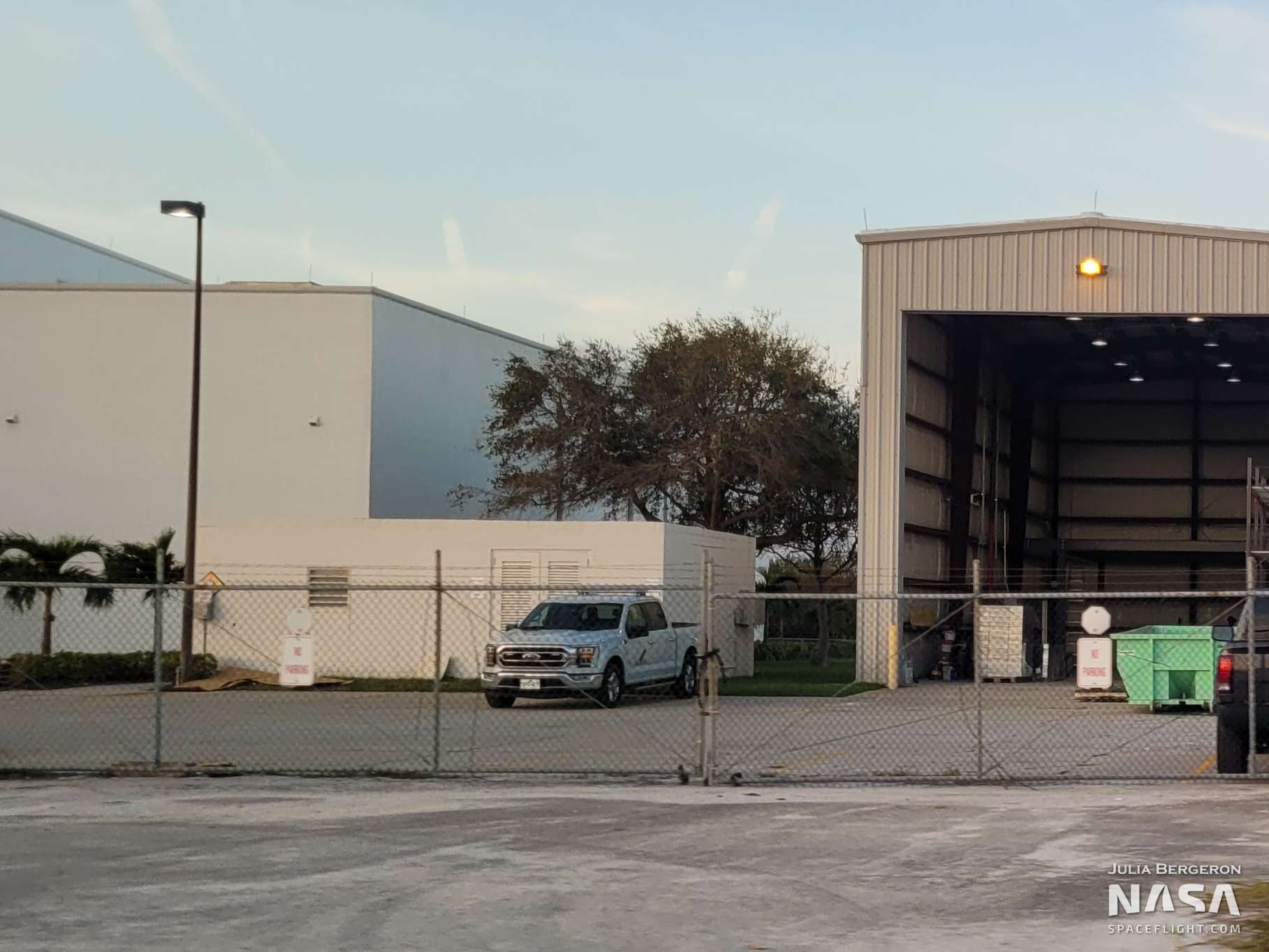 Blue Origin may also be expanding its operations in Florida, with the possible acquisition of a building at Port Canaveral. Blue Origin vehicles have now been spotted multiple times by NSF at a facility previously used by SpaceX for fairing processing.

SpaceX later moved those operations to HangarX at the Kennedy Space Center. It’s unclear what Blue could be using this building for, but one possibility is the company’s own fairing reuse processing.

Blue’s original plan was to land the first stage on a converted cargo ship, named Jacklyn, built similarly to the SpaceX Autonomous Spaceport Drone Ships, albeit on a much larger landing platform. Plans called for the ship to be underway during landing, using the ship’s hydrodynamic surfaces to maintain stability. Jeff Bezos, Blue Origin’s founder, said this decision was made to enable recovery in rougher seas.

With the debut launch of New Glenn slipping further and further, so did conversions on the ship. In August of 2022, Jacklyn was towed out of the Port of Pensacola and headed for the Port of Brownsville, where the ship is due to be scrapped.

Jacklyn is now entering the Port of Brownsville for scrapping. 😭

It would have been amazing to see New Glenn land on this ship but Blue Origin is now pivoting in a different direction.https://t.co/pbTcR67yPW pic.twitter.com/EhL26Cwc2d

It’s not yet clear how Blue Origin now intends to recover the first stage of New Glenn, but an approach much closer to SpaceX’s drone ships seems to be on the table.

While Blue Origin normally keeps its progress fairly private, hardware for the first New Glenn first stage has been spotted in aerial photography and during the company’s coverage of the NS-22 New Shepard mission.

Among the items spotted were a second stage, a partially assembled interstage, an aft thrust section that houses the landing legs, multiple payload fairings, and a variety of domes and welded tank parts. 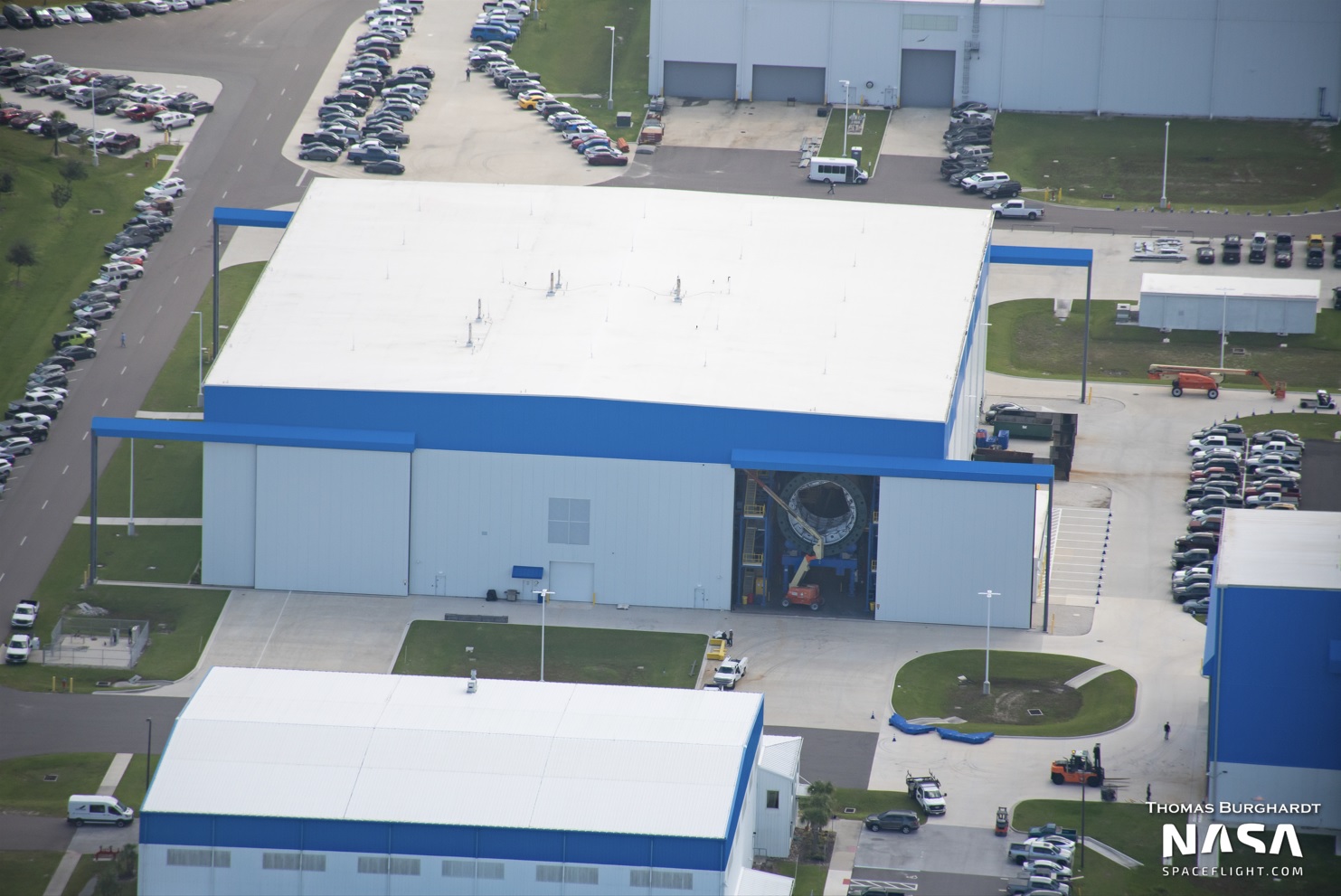 NSF also spotted an interstage during a flyover of the Cape Canaveral area on Oct. 3. Located in the surface coating facility, this may be the same interstage seen during the NS-22 webcast, much further along in the assembly process.

Also seen during the NS-22 webcast and flyovers of the Cape was a second-stage test article at Launch Complex 36 (LC-36). The purpose of this test article is unclear, with it potentially being used for propellant loading tests.

Also at LC-36, the self-propelled modular transporter (SPMT) used to transport the transporter/erector (T/E) was moved into the horizontal integration facility (HIF) on Dec. 2. It’s possible that Blue Origin plans to roll its Glenn Stage 1 simulator out to the launch pad for the first time.

Planet satellite imagery of Blue Origin's Launch Complex 36 earlier today, shows that the transporter system for rolling New Glenn's T/E to the pad is no longer on the ramp. This leads to it being inside the hangar. pic.twitter.com/rK1MP8bsaA

With the first flight-rated set of BE-4 engines now delivered to United Launch Alliance (ULA), Blue Origin is also continuing to test BE-4 engines for both Vulcan and New Glenn at the test site in Corn Ranch, TX.

While seven BE-4 engines will be used on the first stage of New Glenn, Blue Origin was also selected to provide the engines for the first stage of ULA’s Vulcan rocket. The BE-4 engines used on Vulcan will not be required to restart in flight, and as such, Blue Origin has delivered engines capable of being refurbished for another start, similar to the Space Shuttle Main Engine. Engines on Vulcan will either be expended or recovered via ocean splashdown for future reuse.

This will need to be evolved upon for New Glenn, which will require in-flight restart capability to propulsively land the rocket’s first stage.

ULA’s CEO Tory Bruno has confirmed that Blue Origin has settled into a routine of testing BE-4 engines weekly, and is currently testing engines for future Vulcan flights.

New Shepard is Blue Origin’s suborbital rocket, designed for space tourism as well as optionally crewed research flights requiring just minutes in a zero-g environment. New Shepard has flown 23 times to date, with only one mission failure on its most recent launch. 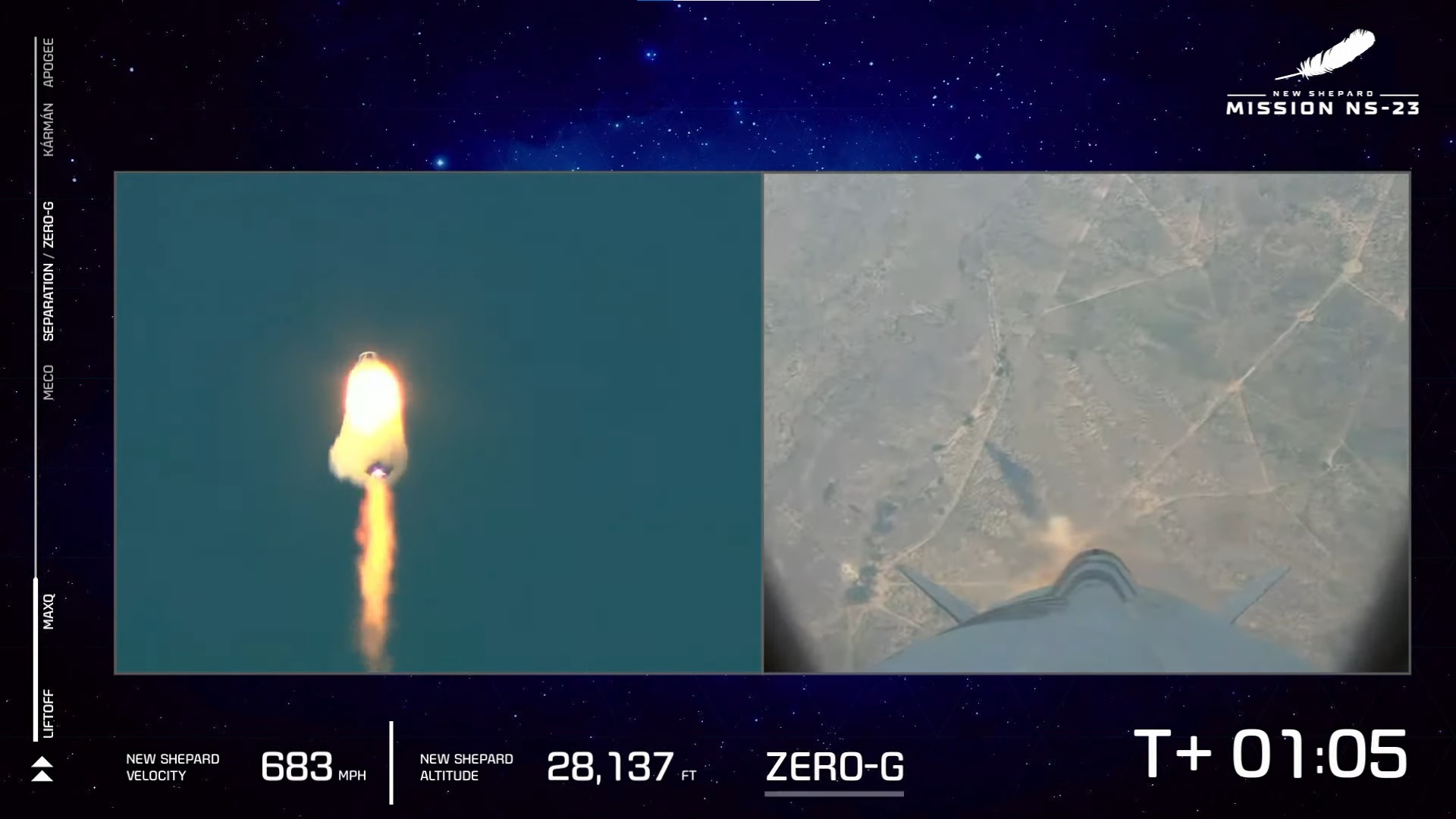 New Shepard has helped to serve as a test bed for New Glenn, both in testing landing practices as well as familiarizing teams with the BE-3 engine and liquid hydrogen systems. A vacuum-optimized variant of the BE-3, the BE-3U, will be used on New Glenn’s second stage.

The most recent flight of New Shepard, NS-23, is the program’s only mission failure to date. At T+1:05, an issue arose with the BE-3 engine, leading to an in-flight abort of the capsule. While no crew was on board, the capsule detected the anomaly and pushed itself to safety using its abort motor, and went on to safely land under parachutes. The booster was not recovered intact.

While no information regarding the investigation into the anomaly has been made public, Blue Origin recently filed a permit with the Federal Communications Commission allowing them to down-link telemetry during the next launch of a New Shepard. This could indicate that Blue Origin and the Federal Aviation Administration are close to concluding the investigation and that Blue Origin is readying to return New Shepard to flight.

Boosters 7 and 9 in dual flow toward Starbase test milestones