Boosters 7 and 9 in dual flow toward Starbase test milestones 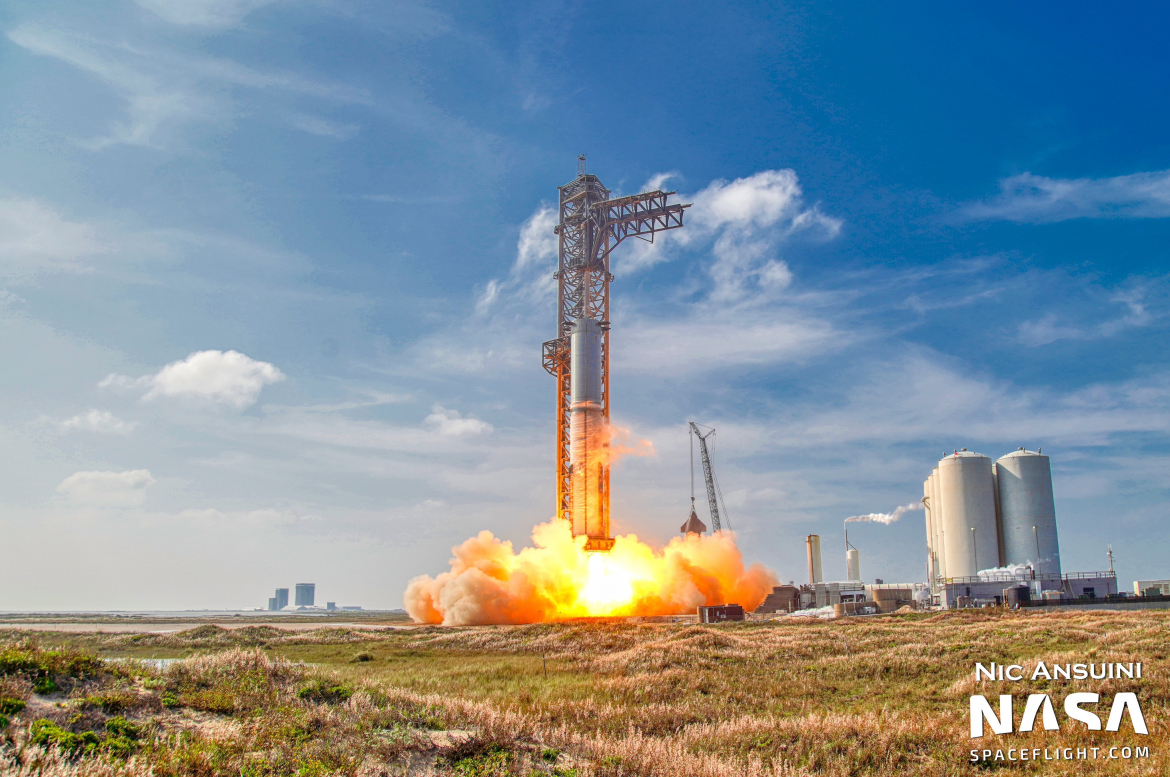 With Booster 7 returned to the Mega Bay (High Bay 2) at Starbase, all eyes are on its stablemate, Booster 9, as both vehicles prepare for a roll down Highway 4.

Booster 7 recently completed another important test as SpaceX continues to inch closer to an orbital test flight of Starship with another Static Fire test, while Booster 9 may roll to the launch site in the coming days for cryogenic proof testing.

On Tuesday, Nov. 29, the Super Heavy booster completed an 11-engine static fire test, this time with a full liquid oxygen (LOX) load in order to test the autogenous pressurization system.

Autogenous pressurization is a method that uses a gaseous propellant to pressurize the vehicle’s propellant tanks. Using the same propellants already present in the tank allows the removal of a separate pressurization system that would use an inert gas — such as helium — to keep the tanks at flight pressure. This gas would need to be stored onboard the vehicle throughout the flight, so the removal of such a system removes mass and complexity from the booster.

Following Boosters 7’s successful 14-engine static fire test on Nov. 14, the launch pad received repairs in preparation for its next round of tests.

One notable repair included the replacement of concrete directly under the OLM (orbital launch mount) which had seen damage during the test, as small chunks of concrete were seen raining down around the launch site. Over the course of a few days, crews could be seen ripping up the old concrete in preparation for the next pour.

Once the old concrete had been removed, a temporary tent was built nearby to the launch pad — which appeared to be used to help support the work of pouring the new pad.

Work also continued on the shielding of one of the OLM legs which houses a multitude of pipes and wires running up into the mount itself.

Once the necessary repairs were complete, residents of the village received an overpressure notice for Monday, Nov. 28.

The day started off early with three tests of the OLM FireX system. This system uses a combination of high-pressure gaseous nitrogen and water to help mitigate the risk of fire and unintentional detonation during engine testing.

The road was then closed and the pad cleared ahead of an expected static fire test.

After the pad was cleared, the orbital tank farm spooled up to begin chilling down the propellant lines ahead of propellant loading on the booster.

As per usual, once the necessary chill down was complete propellant then flowed up to the OLM where it began its chill down ahead of propellant loading.

Next, the lines leading to and up the OLM were chilled, which was indicated by a large continuous vent from the mount.

A short time later, the OLM stopped venting, which is typically used as an indicator of propellant loading. However, as time went on, the booster did not accumulate any frost on either of its two propellant tanks.

The OLM then spooled up once again — indicating a potential abort or recycle.

Just minutes after the venting began, Booster 7 performed a depress vent, confirming the test had been aborted.

Booster 7 depress. Still a lot of time in the window if they want to recycle.https://t.co/VtgzJ1mDmT pic.twitter.com/6CnmzHHpKh

After some time, cars were seen lining up at the checkpoint with the road opening shortly after, concluding testing for the day.

Later that night, residents again received an overpressure notice, this time for Tuesday.

On Tuesday, the road was closed and the pad was cleared early in the testing window, and the tank farm and launch mount began their usual propellant loading operations. However, before propellant could begin, Booster 7 de-pressed, and cars were seen lining up at the roadblock.

As cars went to the pad, the roadblock remained — indicating SpaceX was going for another attempt during the testing window.

Cars remained at the pad for around 10 minutes before clearing once more and testing resuming.

Eventually, the OLM stopped venting, and frost could be seen rising on Booster 7’s LOX tank. The frost continued to rise until nearly the entire tank was covered in frost, meaning almost the entire tank was filled with LOX — a new record for a Super Heavy booster. Previously, the only time this much frost had been seen on a booster was during cryo tests with liquid nitrogen.

During loading, a small amount of frost was also visible climbing up the methane tank. This was another notable milestone as the amount of methane loaded during previous engine tests had not been enough to reach the walls of the tank to form frost.

Just before ignition, the FireX system was activated, and Booster 7 ignited 11 engines for approximately 13 seconds before shutting them down.

Once the test was complete, the OLM spooled up once again to de-tank the vehicle, and the road was reopened later in the day — concluding a successful day of testing.

Following the 11-engine static fire, two Raptor 2 engines were removed from Booster 7 on Dec. 1 before being replaced with another two engines.

The next day, the booster was removed from the OLM via the chopsticks and placed onto the transport stand to be rolled back to the production site. This rollback was likely to allow for repairs and final outfitting ahead of the long-awaited 33-engine static fire test and launch attempt.

Booster 7 was transported back to the production site on Dec. 3 and placed next to Booster 9 inside the Mega Bay.

Meanwhile, over on suborbital Pad B, Ship 24 continued to receive more scaffolding around it — with one side reaching up to the vehicle’s top access hatch.

Using the scaffolding, workers removed a long patch of heat shield tiles near the base of the vehicle, as well as a number of smaller patches just above it. The pattern doesn’t seem to point to a normal replacement of broken tiles, but may actually indicate that additional work was needed in this area of the ship.

After being in place for over a week, the scaffolding around Ship 24’s access hatch has slowly been getting removed, pointing to the completion of the work needed to be done inside the vehicle. In addition, nearly all of the removed tiles have been replaced around Ship 24’s aft section with the scaffolding around that area being dismantled as well.

As it currently stands, Ship 24 still has a large amount of scaffolding around its base as work continues in that area. 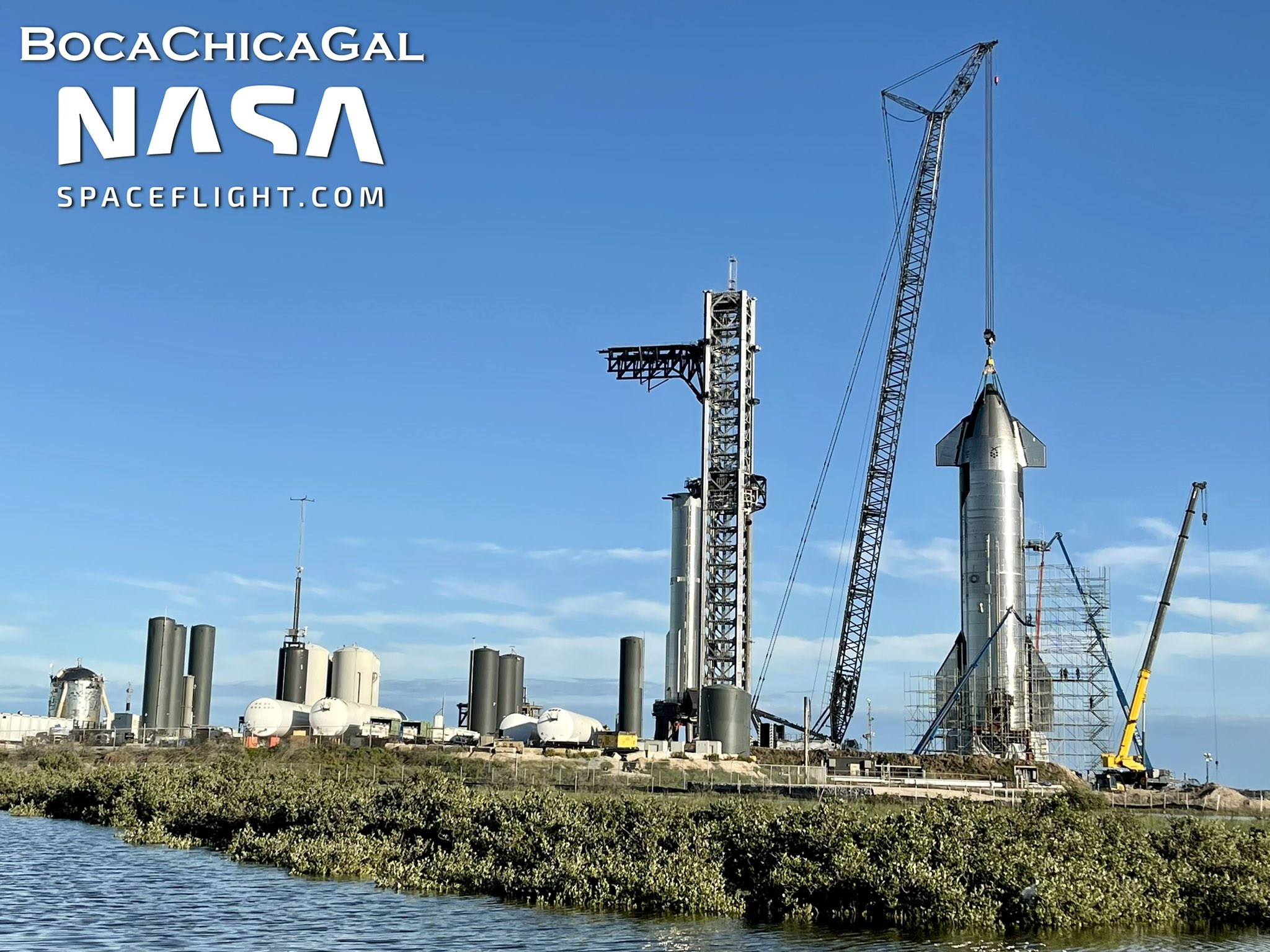 A view of the launch site at Boca Chica, with a forest of scaffolding visible around Ship 24. (Credit: Mary (@bocachicagal) for NSF)

On Dec. 5, the berm protecting the orbital tank farm during testing began to gain additional height. This may be needed for the next round of booster testing as the engine count increases and more dust and debris get kicked up.

The OLM is also continuing to receive more shielding around the propellant transfer lines that run up one of the legs, and cladding continues to be added near the base of the launch tower. The tower cladding will help protect the mechanisms inside the tower during testing as SpaceX ramps up the number of engines being tested on the pad.

At the production site, Booster 9 appears nearly ready to begin testing, with a rollout to the launch site for anticipated cryogenic proof testing expected any day now.

With Booster 7 receiving its final touches in the Mega Bay, Booster 9 could potentially complete initial testing very quickly, assuming all goes to plan.

Next to the Mega Bay, Ship 25 is still residing inside the High Bay with work continuing on the vehicle both inside and out.

With Ship 25 having already completed cryo testing, SpaceX is well on its way to having two sets of orbit-capable Starship stacks ready to go in the not-too-distant future, allowing for a potential quick turnaround time after the orbital test flight occurs.