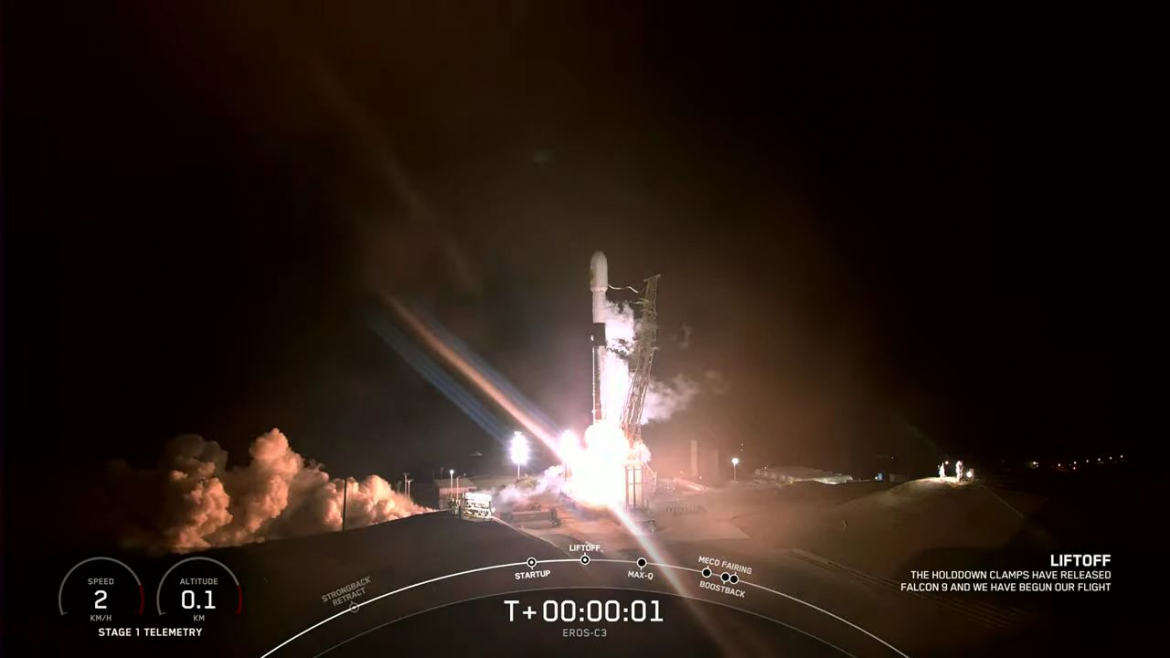 This launch deployed the third NG-series satellite in Israel’s Earth Resources Observation Systems (EROS) network. Designed by Israel Aircraft Industries (IAI), the satellite network is owned and operated by ImageSat International (ISI). As of July 2021, ISI is now partnered with “e-GEOS,” a company owned by the Italian Space Agency and Telespazio, which will allow for combined satellite assets, including COSMOS-SkyMed.

The first satellite in the EROS network, EROS-A, launched in Dec. 2000 aboard a Russian Start-1 rocket into a Sun-synchronous orbit (SSO) 480 km above Earth. The main goal was to produce commercial imagery with a resolution of 1.8 meters. EROS-A re-entered Earth’s atmosphere in 2016.

The second generation, EROS-B, also launched aboard a Start-1 into SSO back in April 2006 with a 506 by 524 km orbit, inclined at 97.5 degrees. This satellite, based on the military reconnaissance satellite Ofeq-3, has an improved image resolution of 70 cm. This satellite was used by Brazil’s Ministry of Defense to help identify objects, people, cars, and more during the 2016 Summer Olympics in Rio de Janeiro. While EROS-B was originally intended to become a network of four satellites, it was later reduced to a singular satellite.

ISI announced the plans for an EROS-C constellation in 2006, with the first launch scheduled for 2009. However, the project was canceled in 2019 and merged into a new program called EROS NG. The new program will utilize the new partnership between ISI and e-GEOS.

All satellites in the planned EROS NG constellation. (Credit: ISI)

The first two satellites in the EROS network, EROS-C1 and EROS-C2, are already in orbit and will be repurposed for use in the new constellation. The exact satellites that will be re-designated have not been publicly identified.

The first new satellite to be launched for this network is EROS-C3, launched on this mission. Based on the OPSAT 3000 class satellite platform, the satellite has a mass of 400 kg and will be able to photograph a swath of 11.5 km with a 30 cm image resolution. EROS-C3 also offers 60 cm resolution for multi-spectral imaging. The spacecraft itself comes in at a size of 4.58 m by 4.6 m by 1 m.

The satellite was launched into a retrograde low Earth orbit, although the exact parameters of its destination orbit are unknown at this time. Launch hazard zones indicate a most likely inclination of approximately 140 degrees. 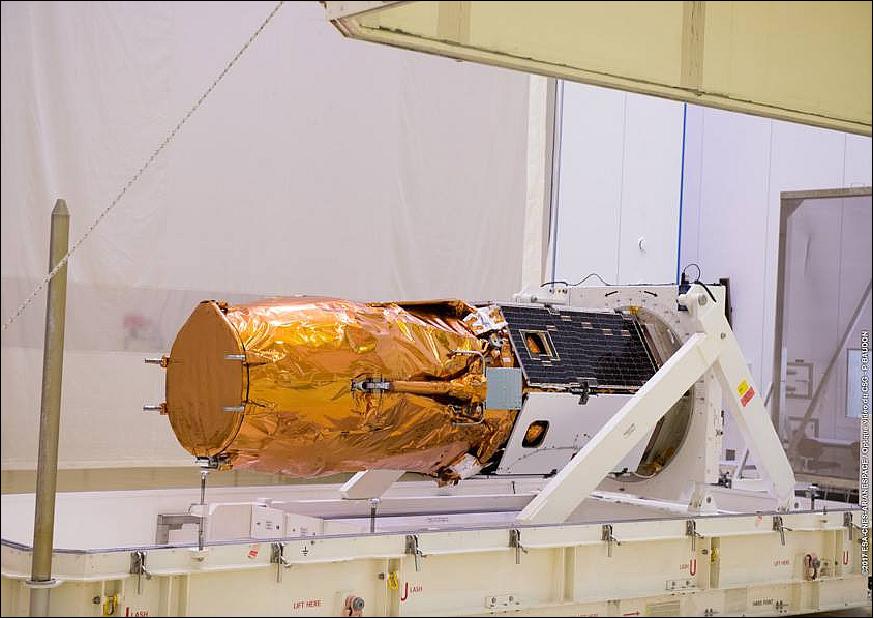 Three more satellites are expected to join the EROS NG constellation by 2026, including EROS-C4, as well as EROSAR-1 and EROSAR-2, both of which will take images in the X-band spectrum.

This mission launched aboard SpaceX’s Falcon 9 rocket. This particular mission flew on booster B1061, which was flying for the 11th time on this mission. This booster previously flew nine flights from Florida, including the Crew-1 and Crew-2 missions that each carried four astronauts to the International Space Station. B1061 has also launched the CRS-23 mission to resupply the ISS, the SXM-8 satellite, the IXPE X-ray telescope, the Transporter-4 and 5 rideshare missions, Globalstar FM15 with USA-328 through 331, and a Starlink mission.

Following the completion of its ninth flight, the booster was moved to SpaceX’s west coast launch site at VSFB. The booster then made its first flight from Vandenberg on a Starlink mission in August 2022. 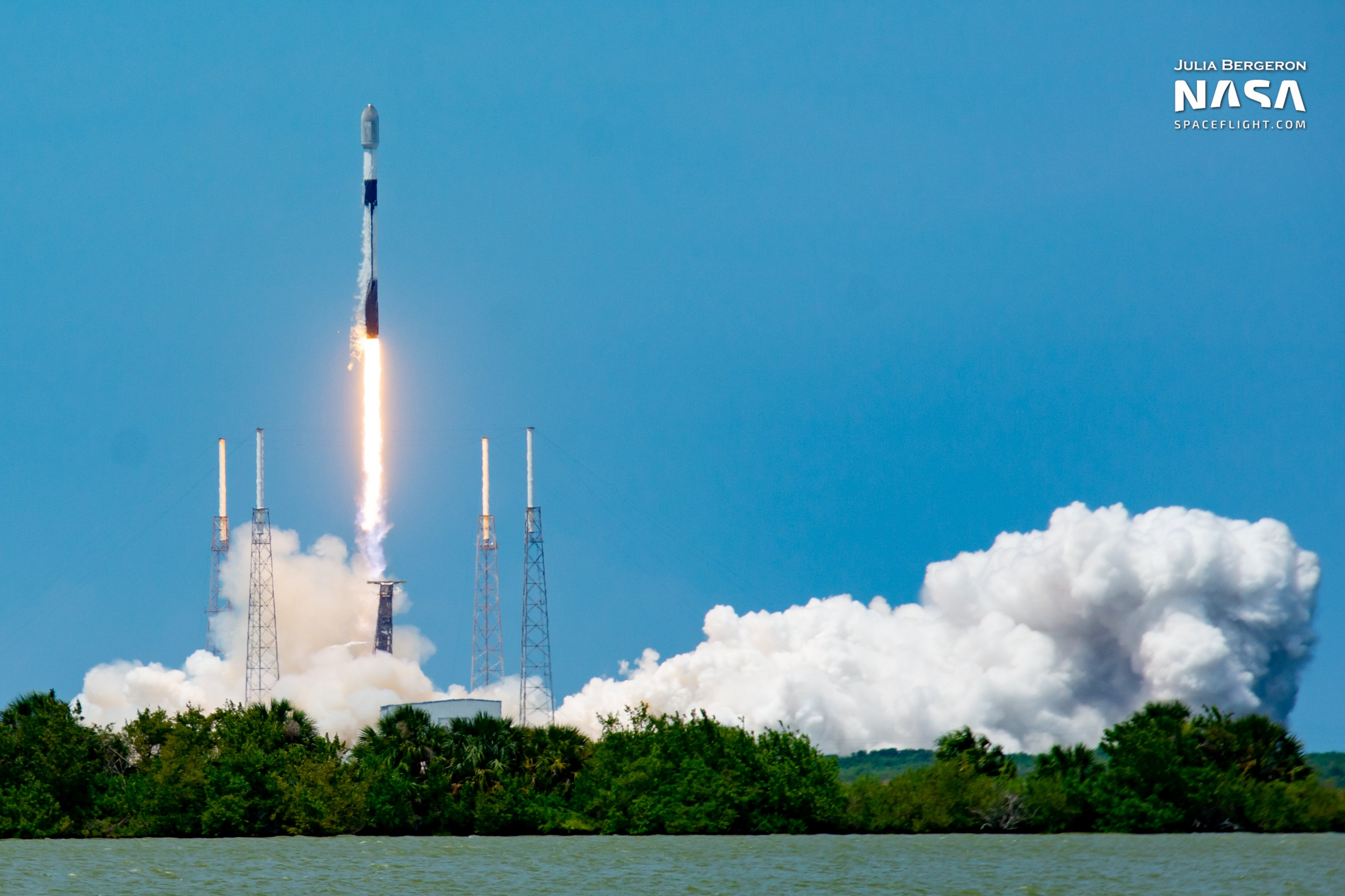 B1061 lifts off on the Transporter-5 mission. (Credit: Julia Bergeron for NSF)

This booster was originally intended to support the Starlink 2-4 mission in November, however, that launch was delayed following a static fire test. It is unclear what issue or issues SpaceX saw during the test fire of the nine Merlin-1D engines. The delay was taken to “take a closer look at data.”

This mission saw B1061 perform a Return to Launch Site (RTLS) landing. This marked the first time this particular booster has landed at Landing Zone 4 (LZ-4), which is located a short distance away from the launch pad at VSFB. When the booster landed successfully, B1061 became the only booster to land on all but one of SpaceX’s different landing zones and drone ships.

The booster has previously completed an RTLS landing at LZ-1 at Cape Canaveral Space Force Station (CCSFS) in Florida. B1061 has also landed on all three of SpaceX’s Autonomous Spaceport Drone Ships (ASDS), landing on Just Read the Instructions and A Shortfall of Gravitas in Florida, and Of Course I Still Love You in California. The only location the booster has not landed is LZ-2 at CCSFS, which, as of this article, has only ever seen five landings, four of which were Falcon Heavy side boosters. 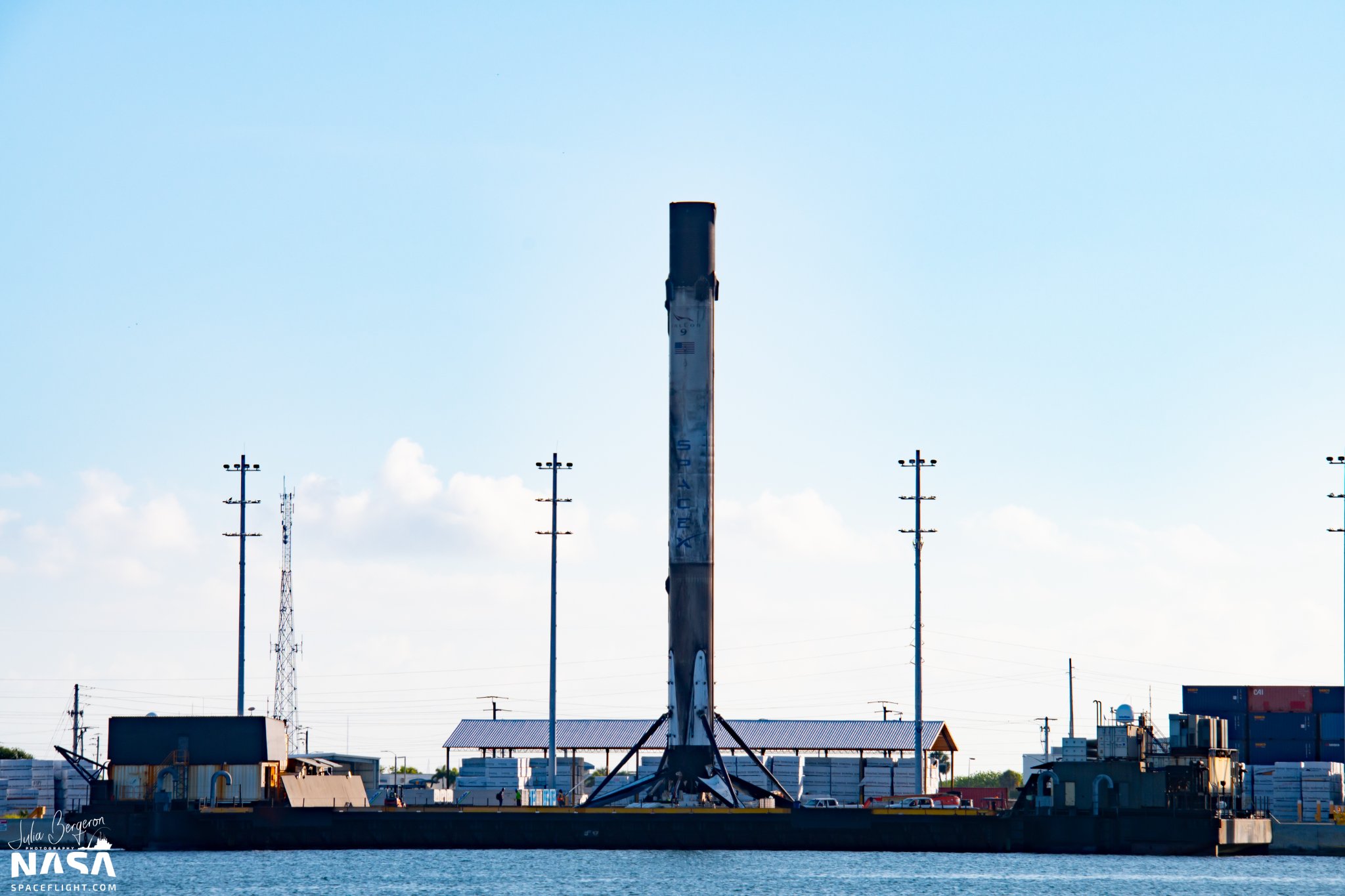 Falcon 9 booster B1061 stands tall on Just Read The Instructions after launching the SXM-8 mission. (Credit: Julia Bergeron for NSF)

35 minutes before liftoff, equipment at the launch pad begins to load the Falcon 9 with RP-1 fuel, a type of refined kerosene. At the same time, liquid oxygen (LOX), the oxidizer for the Falcon fleet of rockets, begins loading into the first stage.

That’s followed by LOX load onto the second stage at T-16 minutes to liftoff. Seven minutes before launch, the engines are chilled to prime them ahead of the supercooled cryogenics that flow through them at liftoff.

At T-1 minute, Falcon 9 goes into “startup,” meaning the onboard computers have full control of the countdown as the propellant tanks are pressurized for flight. At T-3 seconds, the command is given to ignite the nine Merlin-1D engines at the base of the first stage, with liftoff occurring at T0. 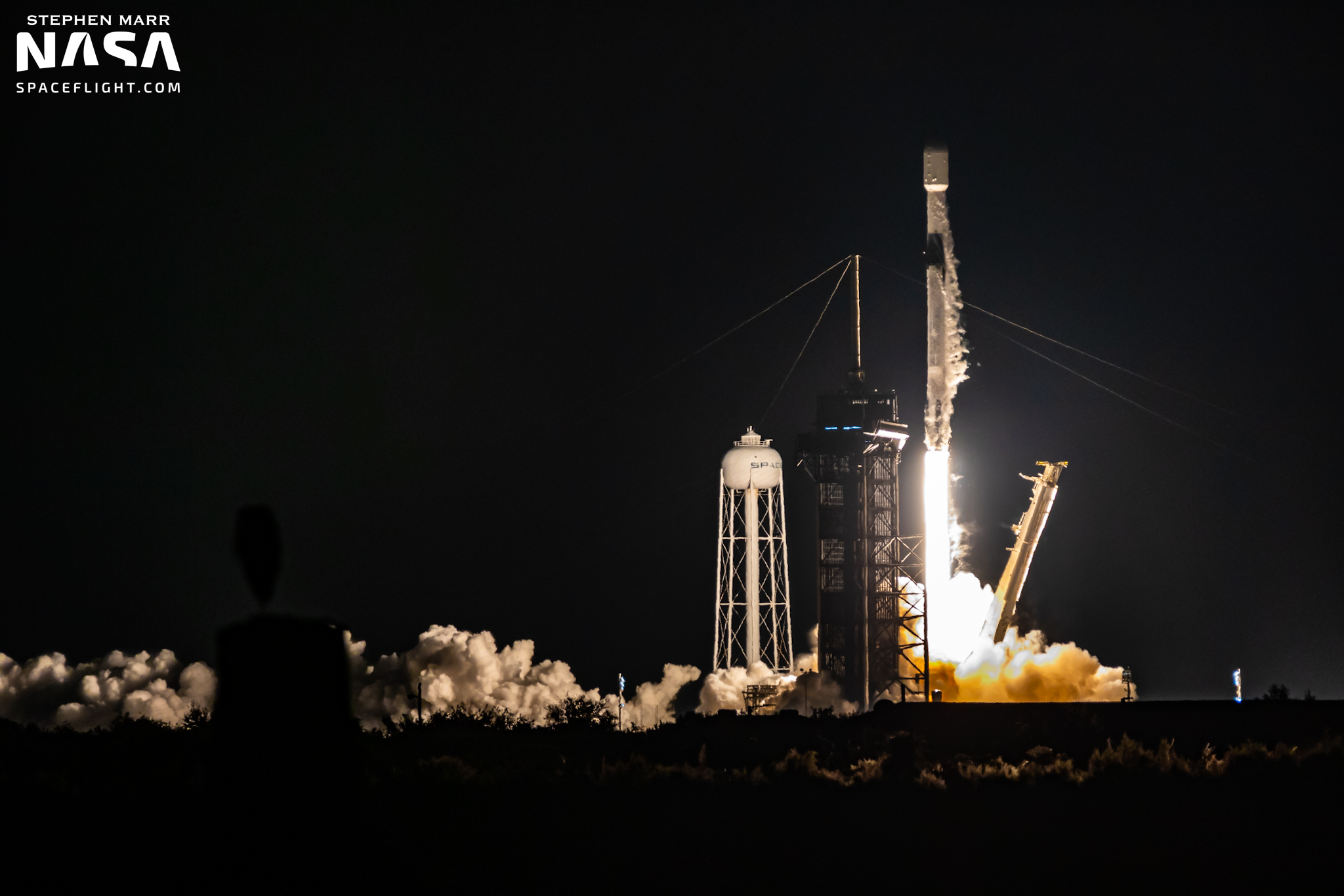 Just over a minute into the flight, the rocket encounters “Max-Q,” which is when the maximum aerodynamic forces are acting on Falcon 9 as it flies through the atmosphere.

A little over two minutes into the flight, a series of events in quick succession begins. The first-stage engines shut down in an event called main engine cutoff (MECO), followed seconds later by the separation of the first and second stages. About eight seconds after that, the second stage engine starts in what’s known as SES-1 (Second Engine Start 1). Just under three minutes into the flight, the fairing halves at the top of the rocket separate and begin their journey back towards the Pacific Ocean, where they will be recovered to be flown again.

While the second stage Merlin Vacuum (MVac) engine continues its burn to bring EROS-C3 into orbit, the first stage performed a flip maneuver and a boostback burn, aiming it on a trajectory towards LZ-4.

The booster fired its engines two more times before landing. The next burn, called the entry burn, saw B1061 use three engines to slow the booster down, as well as to protect it from excessive heating as it begins encountering thicker portions of the atmosphere once again. 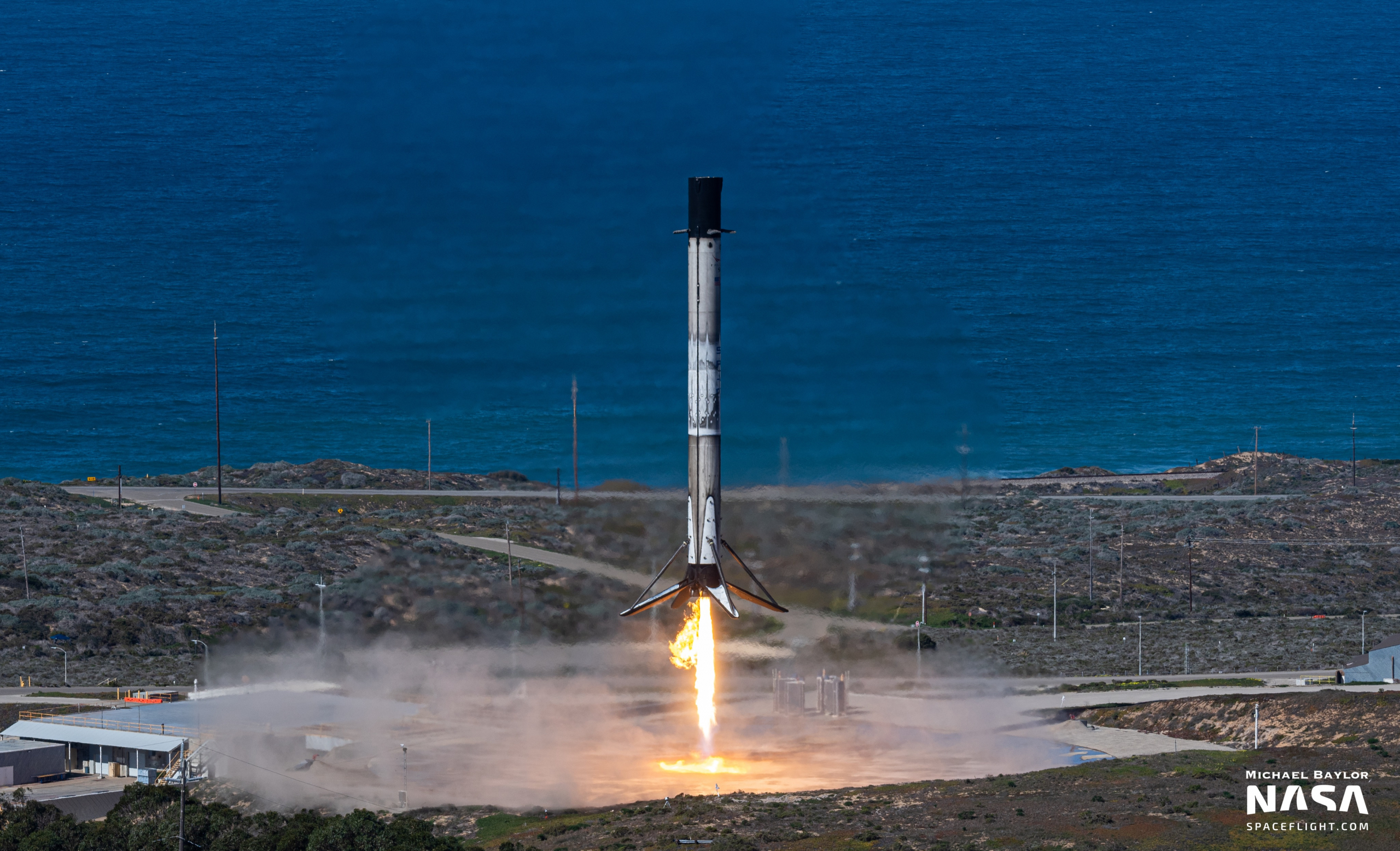 Falcon 9 booster B1071 lands at LZ-4 during the NROL-87 mission. (Credit: Michael Baylor for NSF)

A short time later, B1061 fired a single engine one last time, deployed a set of previously stowed landing legs, and gently touched down at LZ-4.

This launch is the final mission on SpaceX’s 2022 manifest. With the successful launch of this mission, SpaceX has launched 61 flights in 2022, a new record for the company. SpaceX says they plan to fly at least 100 missions in 2023.