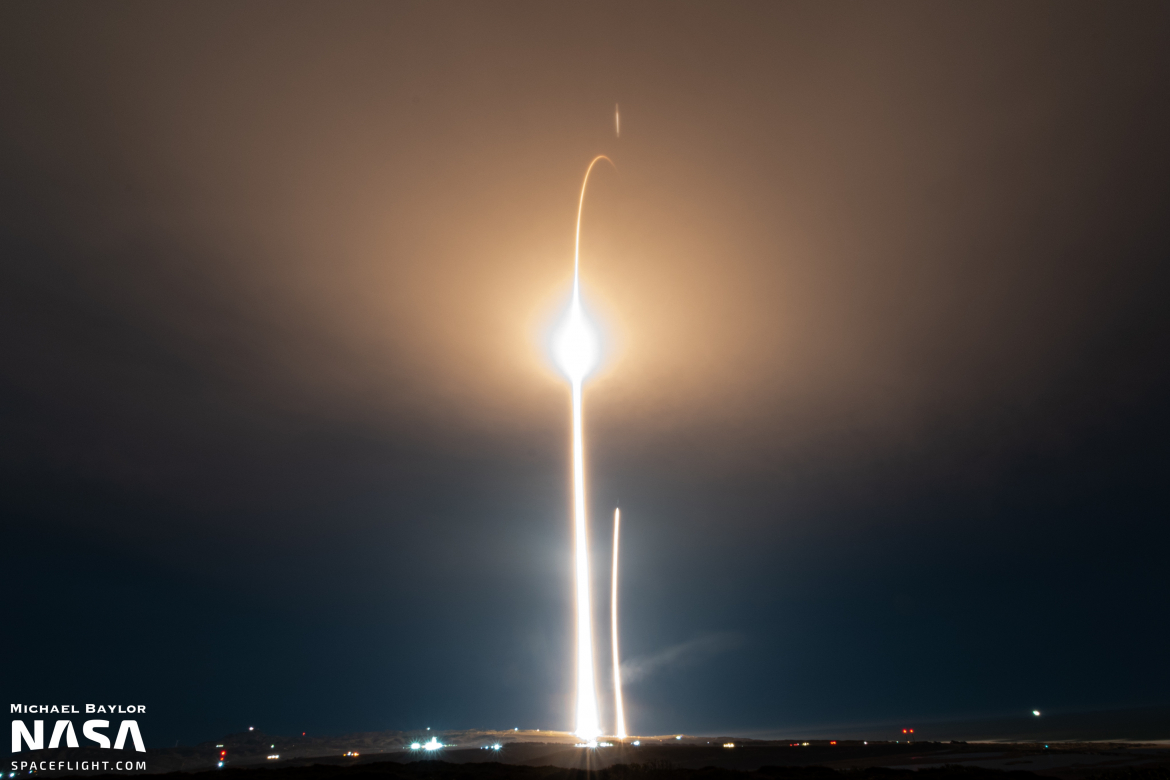 SpaceX’s Falcon 9 launched the joint NASA/CNES Surface Water and Ocean Topography satellite mission from Space Launch Complex 4E at Vandenberg Space Force Base at 3:46 AM PST (11:46 UTC) on Friday, Dec. 16, after a 24-hour delay to allow teams to complete further data review and analysis after moisture was identified in two of the first stage’s Merlin engines.

The first stage performed a Return to Launch Site landing at Landing Zone 4 during the mission.

The Surface Water and Ocean Topography mission, otherwise known as SWOT, is a joint project being led by NASA and the French Centre National d’Etudes Spatiales (CNES) to observe and collect data on bodies of water around the globe. The UK Space Agency (UKSA) and the Canadian Space Agency (CSA) are also contributing to the program.

SWOT aims to conduct the first global study of freshwater bodies, measuring the height of water in individual rivers, lakes, and reservoirs. The data it gathers will allow scientists to further study the effects of climate change on our planet. This will provide a more thorough understanding of how seawater absorbs carbon and atmospheric heat which are the causes of climate change itself and the rise of global temperatures.

The ability to measure the height of water on a global scale and understand climate change with SWOT will also enable scientists to understand further sea level rise.

To conduct science and collect the needed data for the mission, the SWOT satellite features several instruments. These include the wide-swath Ka-band Radar Interferometer (KaRIn) which was designed by NASA’s Jet Propulsion Laboratory (JPL) with its radio frequency assembly built by Thales Alenia Space and CNES.

KaRIn can view 60-kilometer-wide strips on each side of the ground track of the satellite once in orbit, using two Ka-band synthetic aperture radar antennas on either end of a 10-meter boom. The instrument has a horizontal resolution of 50 to 100 meters.

The spacecraft is powered by a pair of solar arrays which were built by Boeing-owned Spectrolab Inc. Across all six panels, the arrays have a total of 3,360 NeXt Triple Junction (XTJ) solar cells. 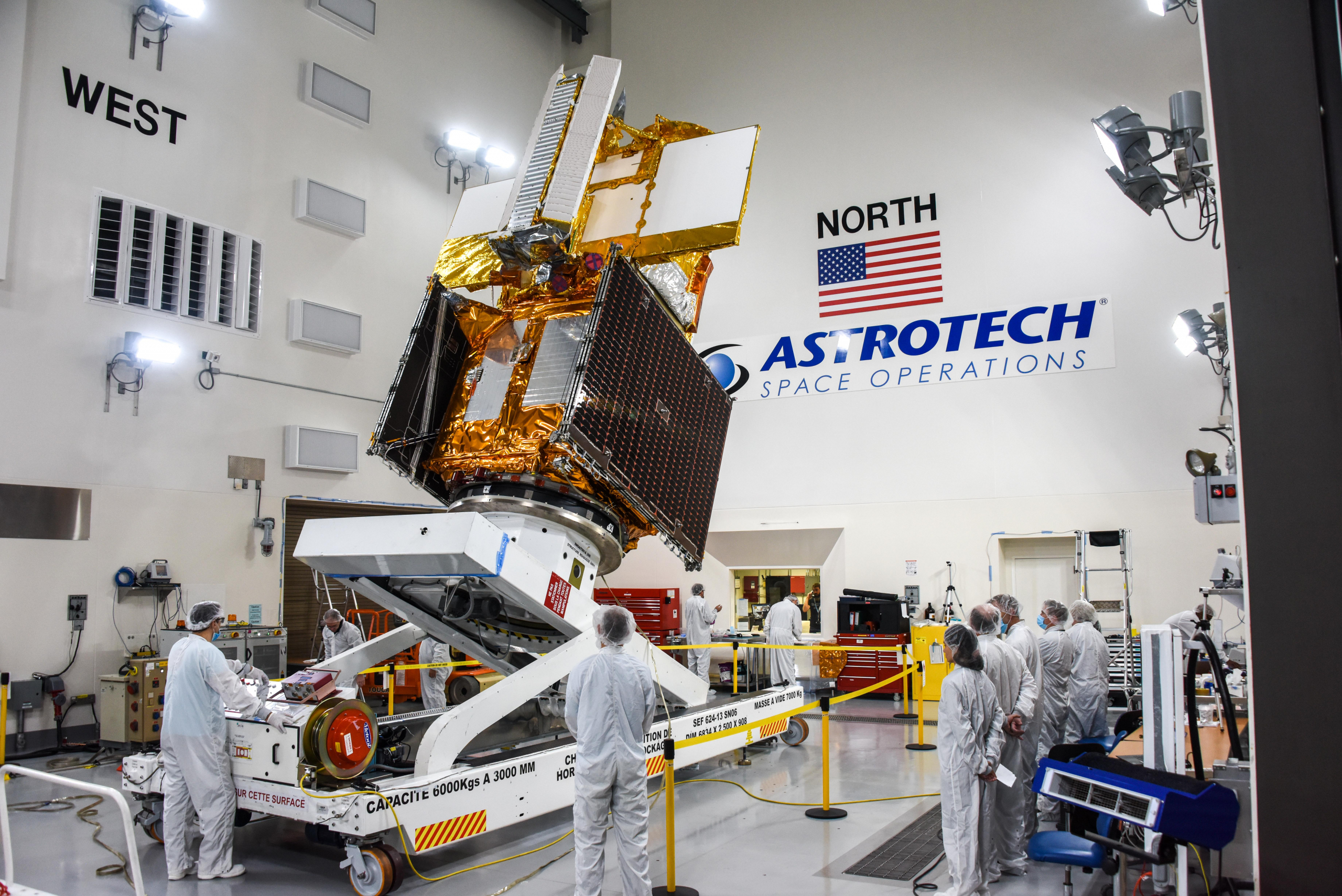 SWOT being tilted during processing at the Astrotech Space Operations Facility (Credit: NASA)

SWOT’s satellite bus was built by Thales Alenia Space for prime contractor CNES. The science instruments supplied by JPL were integrated with the satellite bus at the CNES assembly facility during final assembly, which began about a year before SWOT was shipped to the United States for launch.

After assembly was completed, SWOT was put through several environmental tests by CNES to check that it was ready for launch. With these completed, it was transported from Nice, France to Vandenberg Space Force Base using a U.S. Air Force Lockheed C-5 Galaxy aircraft. After arriving in California on the evening of Oct. 16, the satellite was transported to the Astrotech Space Operations Facility, on base at Vandenberg.

Final checks on the satellite were completed at Astrotech before SWOT was moved to a SpaceX facility where it was encapsulated with two fairing halves. After encapsulation, the satellite was horizontally integrated with the rest of the Falcon 9 rocket inside the Horizontal Integration Facility (HIF) at Space Launch Complex 4 East (SLC-4E).

On Dec. 9, launch managers from NASA, the SWOT team, and SpaceX met to conduct the Flight Readiness Review, or FRR, to go over all aspects of the mission and certify that all teams were ready to launch.

SpaceX had been awarded the contract to launch SWOT on Nov. 22, 2016, with the launch then targeted for April 2021. When the contract was awarded, the total cost for NASA to launch the vehicle was estimated to be around $112 million. According to NASA, this cost included “the launch service; spacecraft processing; payload integration; and tracking, data and telemetry support.” 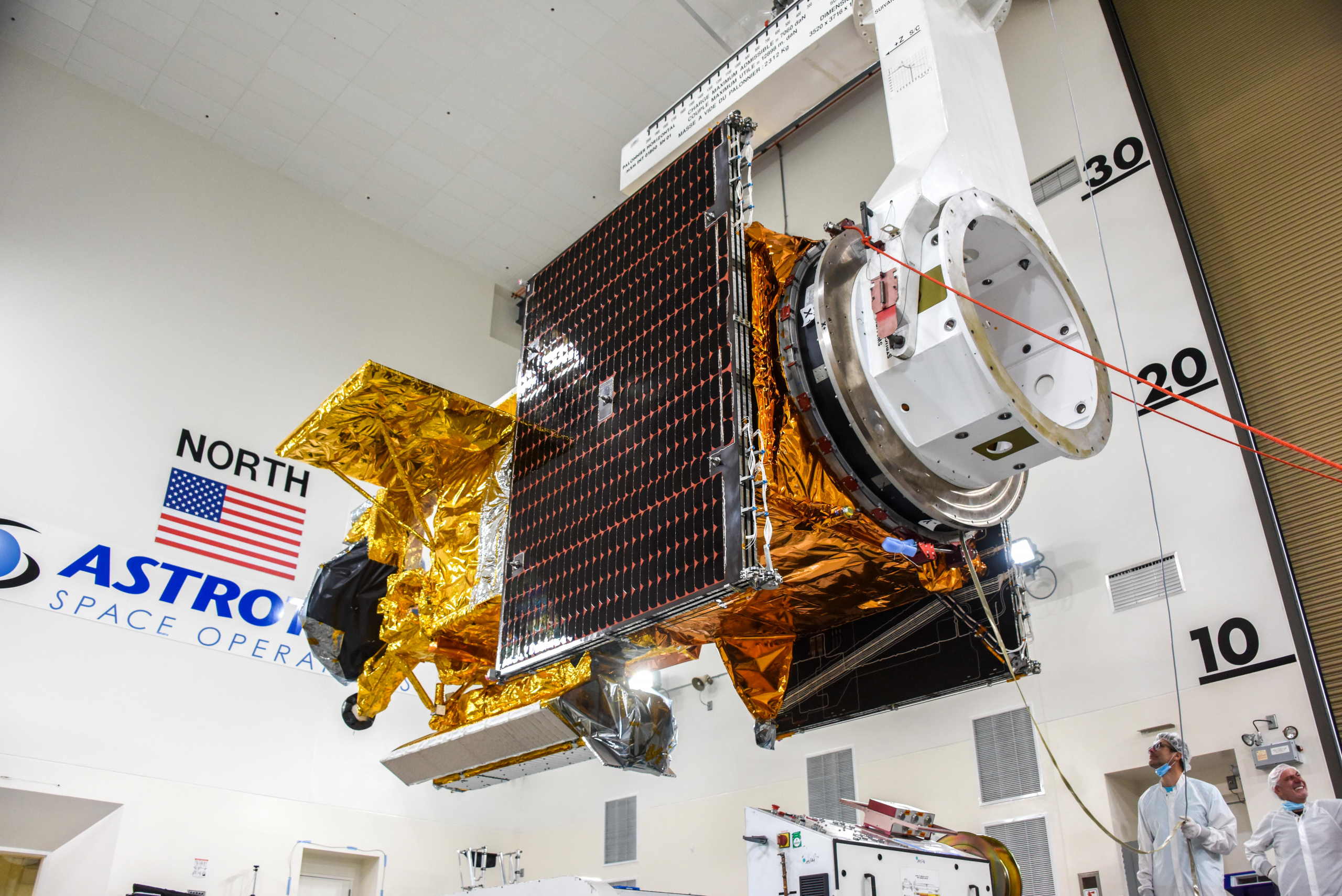 SpaceX’s launch and landing facilities at Vandenberg Space Force Base, which include SLC-4E and Landing Zone 4 (LZ-4) have been used for numerous launch vehicles before their current form under SpaceX facilitating Falcon 9 operations.

Between 1964 and June 1967, a total of 27 Atlas Agena D rockets were launched from the pad, many carrying KH-7 Gambit reconnaissance satellites for the National Reconnaissance Office (NRO). The site was repurposed for the Titan program in the late 1960s. Between 1971 and 1982, a total of 22 Titan IIID missions were launched from SLC-4E, followed by seven Titan 34D missions between 1983 and 1988, carrying KH-9 Hexagon and KH-11 Kennen satellites for the NRO.

After Titan 34D was retired, eight Titan IVA rockets were flown from SLC-4E between 1991 and 1997. These were followed by the last Titan variant to launch from the pad – the Titan IVB. A total of five Titan IVB launches occurred from SLC-4E, concluding with Titan IVB B-26 on Oct. 19, 2005, the final flight of the Titan rocket family, which carried a KH-11 satellite.

After SpaceX took over the site, the launch umbilical and mobile gantry towers at SLC-4E were demolished. The first SpaceX launch from SLC-4E was made on Sept. 29, 2013, by a Falcon 9 v1.1. 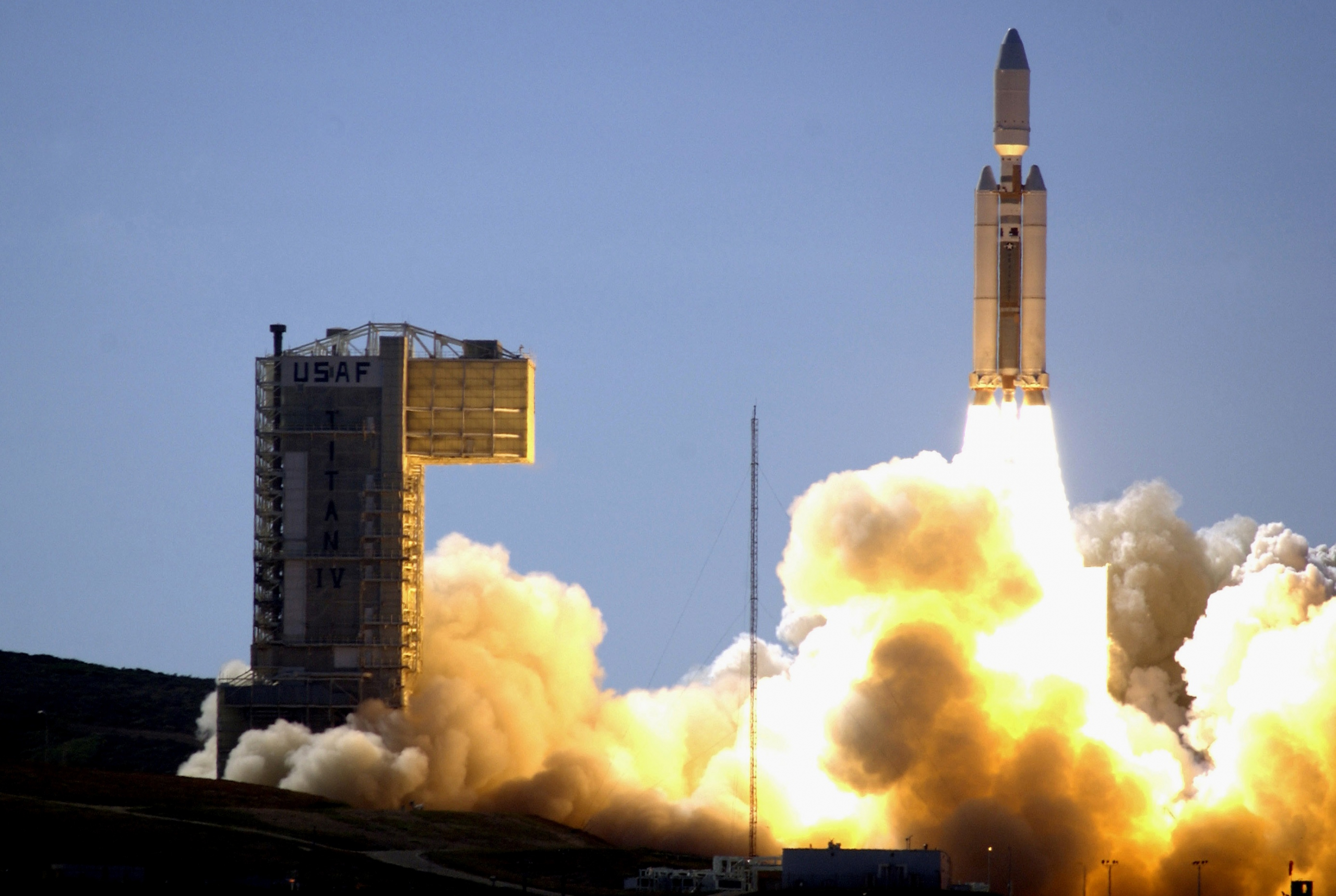 SpaceX uses Landing Zone 4 to recover Falcon 9 boosters flying return-to-launch-site (RTLS) missions. It was built on the site of Space Launch Complex 4 West (SLC-4W), which like SLC-4E was originally used as an Atlas Agena D launch pad – operating in this role between 1963 and 1965.

SLC-4W was also used by Titan rockets, beginning with the Titan IIIB which held its first launch from the site in July 1966. The last standard Titan IIIB was launched from SLC-4W on June 3, 1969, giving way to upgraded versions of the rocket which would continue to use the pad until February 1987. It then was used to launch the Titan II SLV, or Titan 23G, in September 1988.

The final mission from SLC-4W, which also marked the final launch of Titan II, occurred on Oct. 18, 2003. This rocket featured a first stage converted from an LGM-25C Titan II intercontinental ballistic missile that had been stood on alert at McConnell Air Force Base in Kansas between 1967 and 1986. 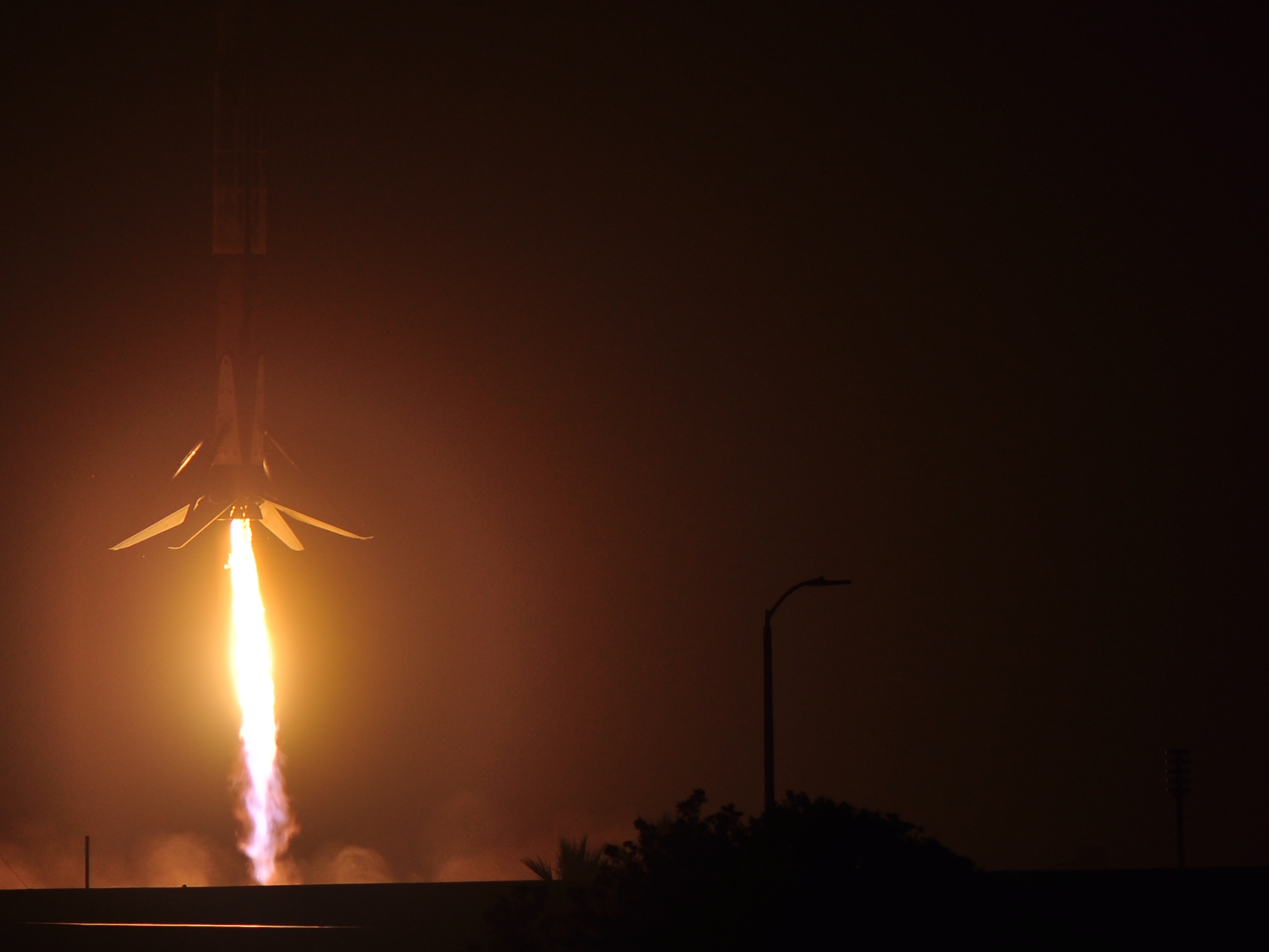 A Falcon 9 booster lands at LZ-4 during the SAOCOM-1A mission, the first to use the site. (Credit: Jay DeShetler for NSF/L2)

After completing the integration of Falcon 9, the rocket was moved to the launch pad using the Transporter Erector (T/E) and raised to the vertical in preparation for the launch attempt.

SWOT was launched aboard a flight-proven Falcon 9. The first stage, B1071-6, has been used for five previous missions with its first launch being that of the NROL-87 mission in February. It has since been used for another NRO launch in April, Germany’s SARah-1 in June, and more recently a pair of Starlink missions in July and October. It was recovered again after launch via an RTLS profile and landing at LZ-4.

Three seconds before launch, the nine Merlin 1D engines that power Falcon 9’s first stage ignited. Burning liquid oxygen (LOX) and RP-1 kerosene, these engines power the early phases of ascent. Once the engines have built up to full thrust, the hold-down clamps on the reaction frame of the T/E released and Falcon 9 lifted off from SLC-4E.

After clearing the pad, Falcon rolled to align itself onto the proper launch azimuth to take it to a 77.6-degree inclined orbit and subsequently pitch downrange. About a minute after liftoff, the vehicle passed through maximum aerodynamic pressure, or Max-Q, the point of the flight at which the stresses on the Falcon 9 are at their greatest.

About two and a half minutes into the flight, the first stage engines shut down, in an event designated main engine cutoff (MECO). Three seconds later, the booster separated from the second stage, with the ignition of the second stage’s single Merlin Vacuum (MVac) engine occurring seven seconds after separation.

While the second stage carried on towards orbit, the first stage conducted a flip maneuver using cold gas thrusters to reorient itself for its return to the launch site. Shortly after, the payload fairing separated from the second stage, exposing SWOT to the environment of space for the first time.

Falcon 9 lifts off from SLC-4E during a Starlink mission in August. (Credit: SpaceX)

The first stage next conducted a boostback burn, using its engines to put it on a trajectory back towards Vandenberg Space Force Base and on track for its landing at LZ-4. The four grid fins steer the vehicle as it descends through the dense portions of the atmosphere will be deployed.

After the boostback burn was completed, the booster performed its entry burn, with three Merlin-1D engines igniting to help protect the first stage from the searing heat of reentry, using their exhaust plumes as an effective heat shield. Finally, the center engine lit for the landing burn, guiding the first stage to a soft touchdown at LZ-4.

While the first stage was performing its return to the launch site, the second stage continued its journey to insert the SWOT payload into its planned orbit. SWOT separate from the second stage to begin its mission.