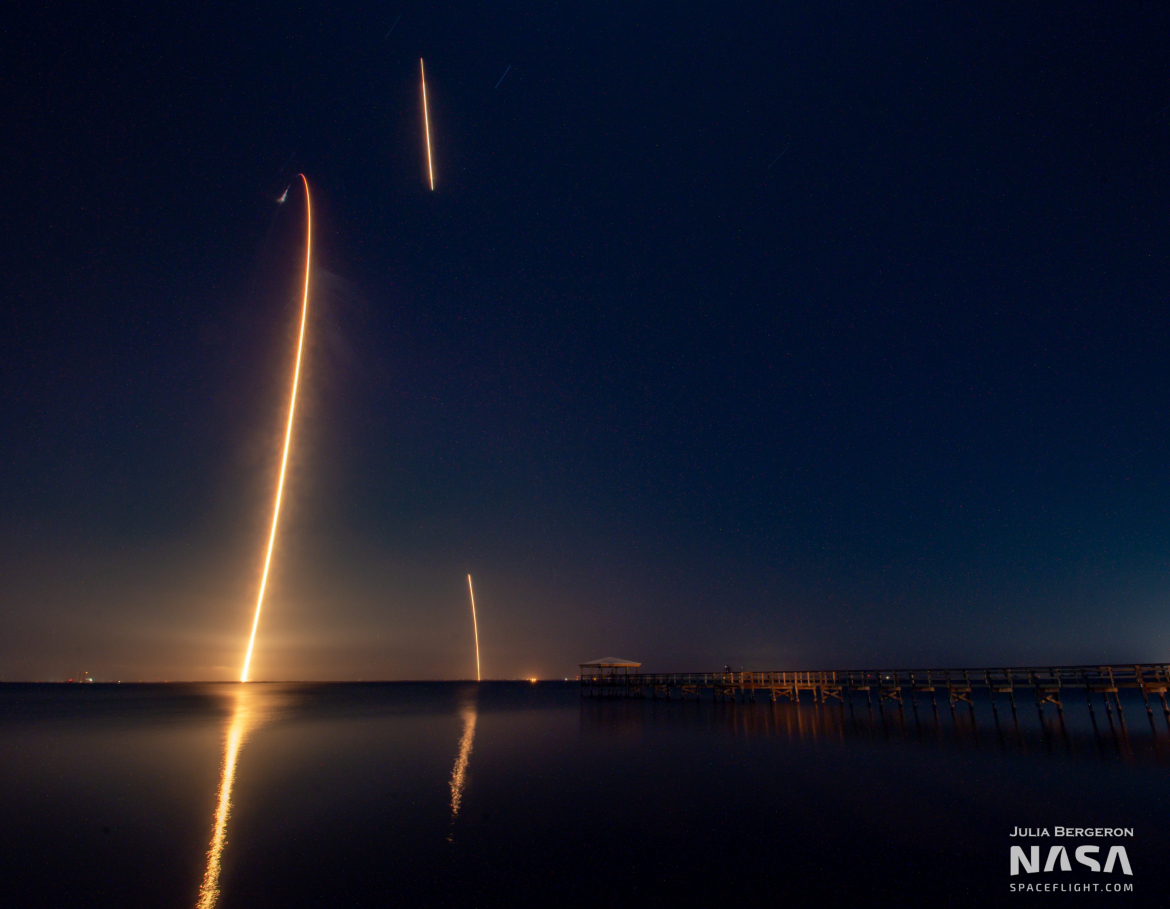 SpaceX has used its Falcon 9 rocket to send a privately funded mission toward the surface of the moon. After a series of delays, HAKUTO-R Mission 1 lifted off from Space Launch Complex 40 (SLC-40) at the Cape Canaveral Space Force Station (CCSFS) at 2:38 AM EST (07:38 UTC) on Dec. 11.

An initial launch window on the morning of Wednesday, Nov. 30 was forgone “to allow for additional pre-flight checkouts.” A backup opportunity on Dec. 1 was called off “after further inspections of the launch vehicle and data review.”

This is a mission that has been more than a decade in the making. The company behind the mission, ispace, began in Japan as a competitor in the Google Lunar XPRIZE. The goal of this particular XPRIZE was to become the first private lunar exploration mission. Ispace decided to call the mission HAKUTO, which means “white rabbit” in Japanese.

In 2015, the team reached a major milestone, completing a successful rover demonstration, which earned them $500,000. Just two years later, the team had a flight-ready rover at its first launch site. However, the primary spacecraft did not fulfill its part of the mission, therefore the joint ride to the moon was canceled.

Fast forward to 2018, and the mission was revived as HAKUTO-R, the “R” standing for “reboot.” It will consist of a series of missions to the lunar surface.

This launch will be called “Mission 1” (M1), with the main objectives including validating the lander’s design as well as the company’s business model. 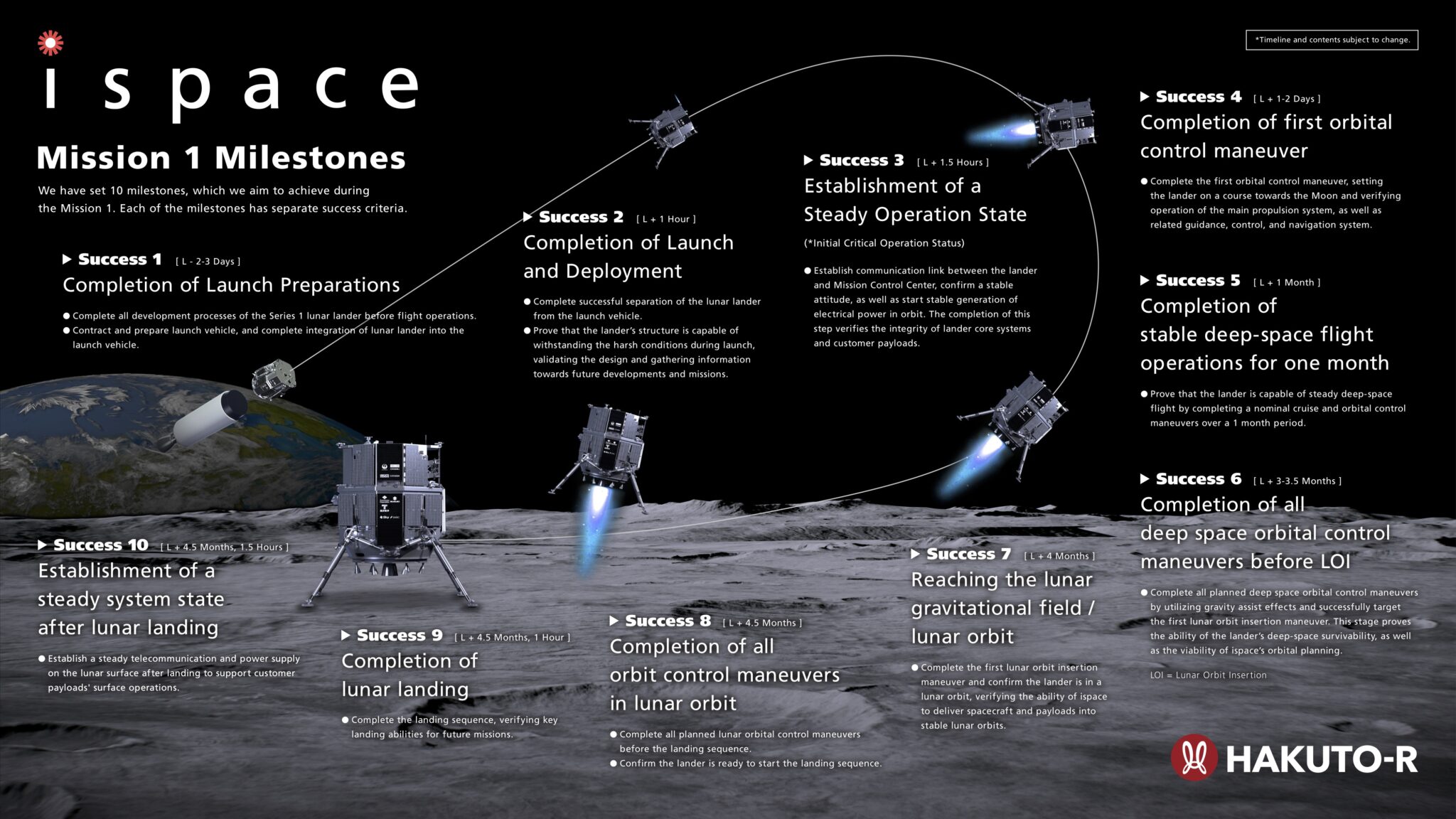 In a release from ispace, the company outlined the exact ten goals they are hoping to complete on this mission.

The landing site chosen for this mission is called Atlas Crater. It is located on the southeastern outer edge of Mare Frigoris, translated in English as the “Sea of Cold.” The exact targeted coordinates, according to ispace, are 47.5° N, 44.4° E. Additional backup sites include Sinus Iridum, Lacus Somniorum, and Oceanus Procellarum, all of which are roughly at the same latitude to allow for adequate sun exposure.  Landing is expected to occur about 4.5 months after liftoff.

This mission includes additional payloads for both lunar orbit and the lunar surface.

A small lunar rover named “Rashid” will drive around the surface. The small rover was developed by Mohammed bin Rashid Space Centre in the United Arab Emirates. 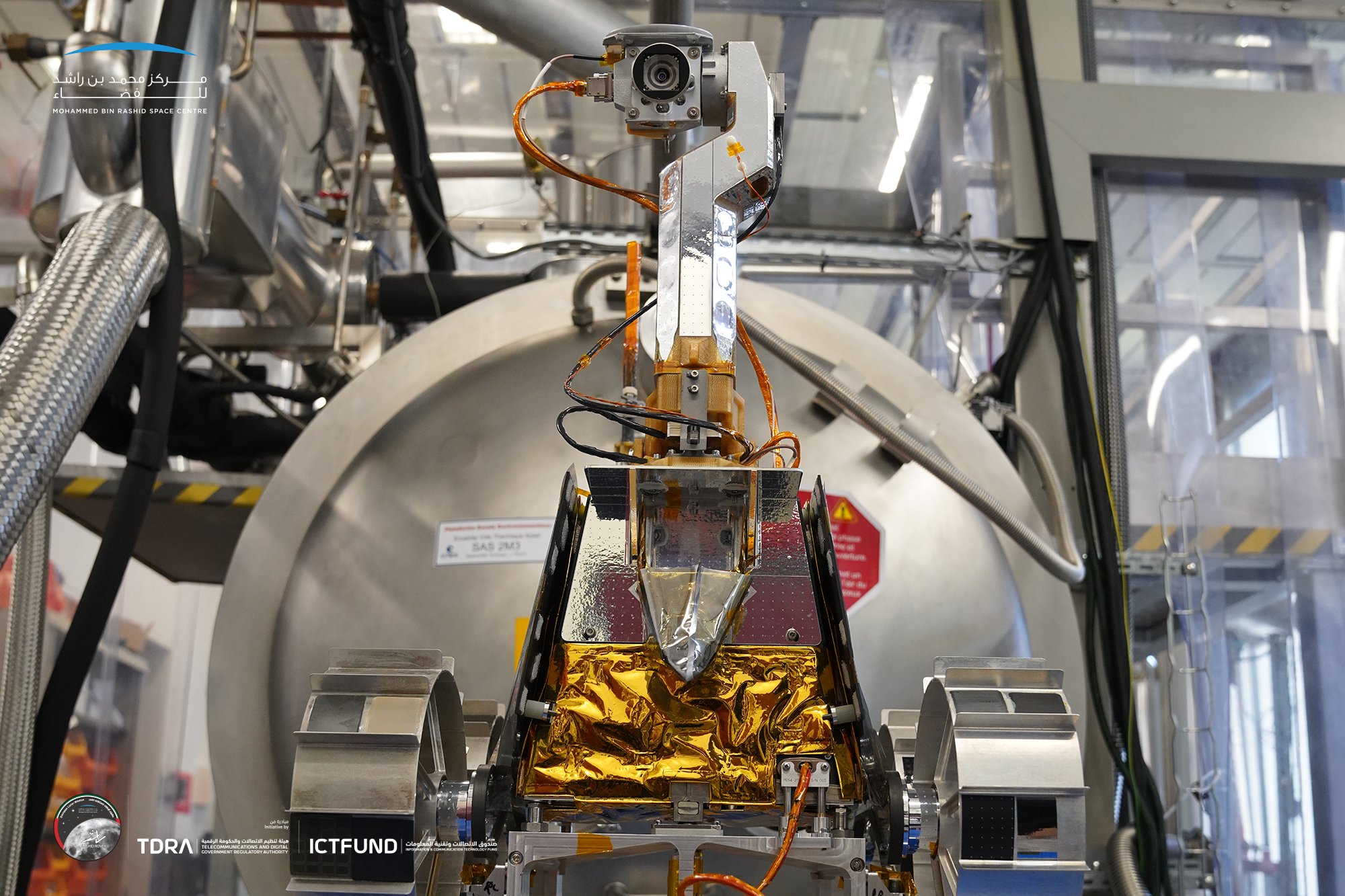 The Japanese Aerospace Exploration Agency (JAXA) will also have its own lunar robot which the agency says is approximately the size of a baseball. Additional private experiments will also be onboard, although the exact details of each additional payload are not available.

The company says one final payload was also added; a music disc containing the song “SORATO” by the Japanese rock band Sakanaction will travel to the lunar surface. The song, according to ispace, was written in support of Team HAKUTO during the Google Lunar XPRIZE. In addition, the initial name for the lunar lander was called “Sorato.”

The Falcon 9 carrying these payloads also contained a CubeSat bound for the moon. The secondary payload developed by NASA’s Jet Propulsion Laboratory named “Lunar Flashlight” will enter a highly elliptical lunar orbit which will have it pass approximately 15 kilometers over the moon’s south pole. The goal is to use lasers to look for evidence of water ice. 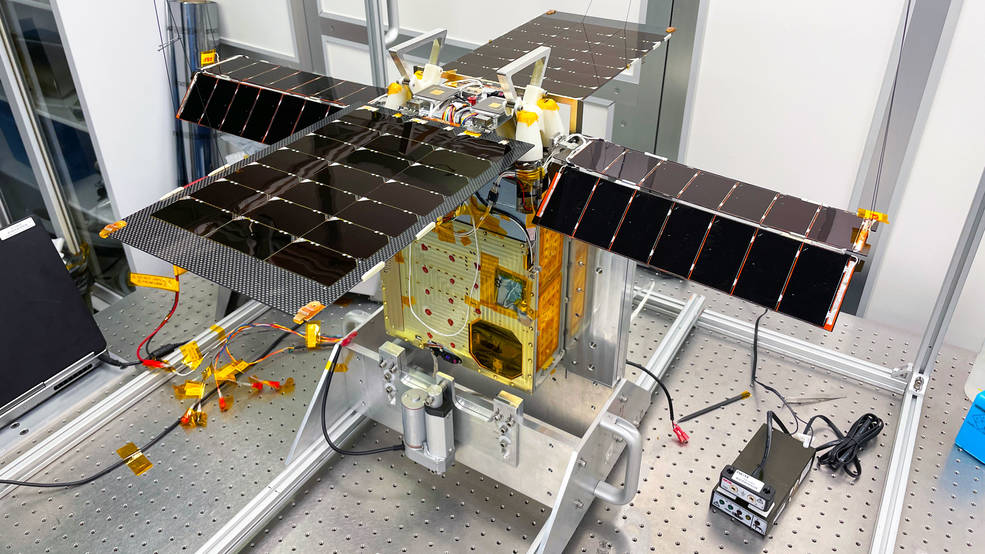 The Lunar Flashlight CubeSat will use this launch as a rideshare to the moon. (Credit: NASA/JPL-Caltech)

This payload was originally supposed to fly on the Artemis I mission, however, due to the launch delay from its original August attempt, the satellite was instead placed onboard this launch.

The Falcon 9 taking these payloads to orbit made its fifth flight, all five of which occurred from SLC-40.

B1073, the first stage booster, previously launched SES-22 in May 2022 as well as three Starlink missions in May, August, and September.

The launch profile for this mission included a Return to Launch Site (RTLS) landing for B1073, as opposed to landing on a drone ship in the Atlantic Ocean. It touched down at Landing Zone 2 (LZ-2) just minutes after liftoff.

SpaceX deployed a marine asset for this mission. Fairing recovery ship Bob was parked approximately 460 kilometers (285 miles) to the east of SLC-40 to recover the two protective halves, known as fairings, that cover the spacecraft while it speeds through Earth’s atmosphere.

35 minutes before liftoff, equipment at the launch pad begins to load the Falcon 9 with RP-1 fuel, a type of refined kerosene. At the same time, liquid oxygen (LOX), the oxidizer for the Falcon fleet of rockets, begins loading into the first stage. 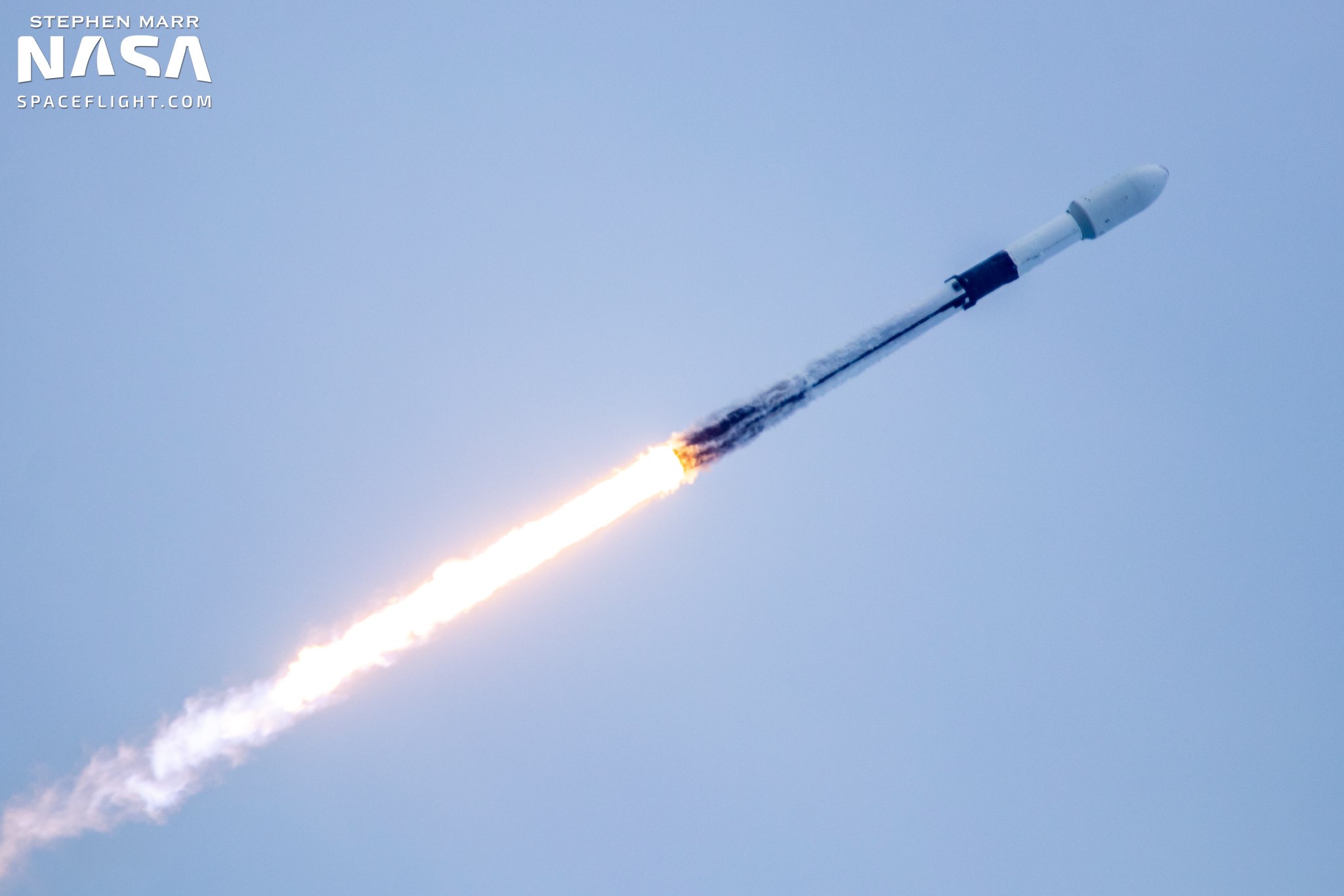 That’s followed by LOX load onto the second stage at T-16 minutes to liftoff. Seven minutes before launch, the engines are chilled to prime them ahead of the supercooled cryogenics that flow through them at liftoff.

At T-1 minute, Falcon 9 goes into “startup”, meaning the onboard computers have full control of the countdown as the propellant tanks are pressurized for flight. At T-3 seconds, the command is given to ignite the nine Merlin 1-D engines at the base of the first stage followed by liftoff at T0.

At T+1 minute 12 seconds, the rocket encounters “Max-Q,” when the maximum aerodynamic forces are pushing down on Falcon and HAKUTO-R on its ascent through the atmosphere.

At approximately T+2 minutes 13 seconds, a series of events in quick succession begins. The first stage engines have main engine cutoff (MECO), followed four seconds later by separation of the first and second stages. About seven seconds after that, the second stage engine starts in what’s known as SES-1. Just after three minutes into flight, the fairing halves separate and begin their journey back towards the Atlantic Ocean for recovery and reflight.

While the second stage Merlin Vacuum (MVac) engine continues its five-and-a-half-minute-long burn to bring HAKUTO-R into an initial parking orbit, the first stage used its attitude control thrusters to perform a flip maneuver, aiming it on a trajectory back towards LZ-2. 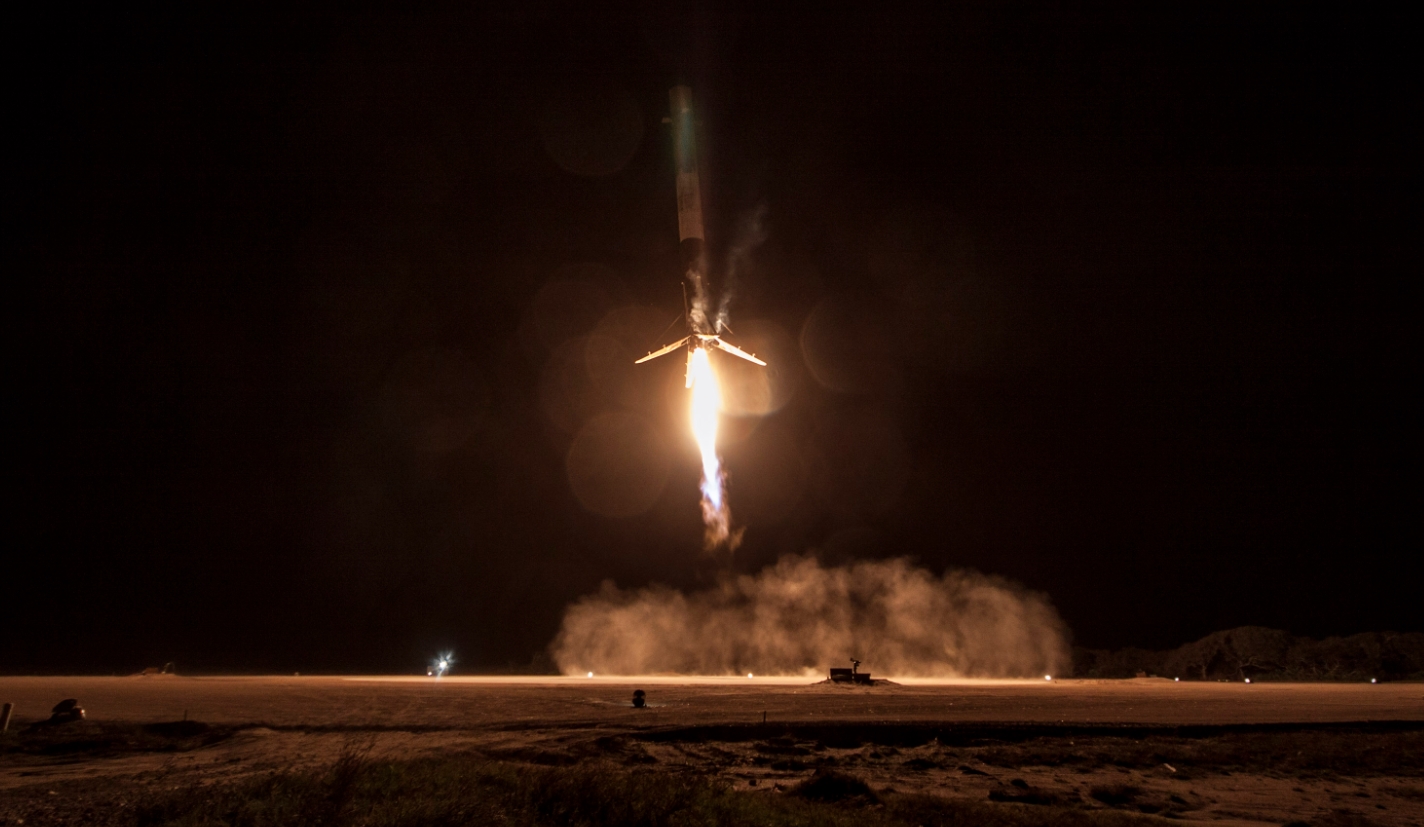 At T+6 minutes 33 seconds, an entry burn uses three engines to help slow the first stage booster down as well as protect it from excessive heating as it begins encountering the atmosphere once again.

At T+7 minutes 44 seconds, B1073 fired one single engine one last time, deploying a set of previously stowed landing legs, touching down gently at LZ-2. While this was happening, at T+7 minutes 52 seconds, confirmation of Second Engine Cutoff 1 (SECO-1) was received, meaning the second stage and the payload were in an initial parking orbit.

A second ignition of the MVac engine occurred at T+40 minutes and two seconds, lasting 56 seconds. This was the final burn before HAKUTO-R was deployed on its journey to the moon 46 minutes and 59 seconds after lifting off. NASA’s Lunar Flashlight stayed onboard Falcon 9 for a few more minutes, deploying 53 minutes and nine seconds into flight.

This launch marks the 190th all-time flight of a Falcon 9 rocket, and the 55th of the year. Adding in Falcon Heavy, SpaceX has flown 56 missions year-to-date.