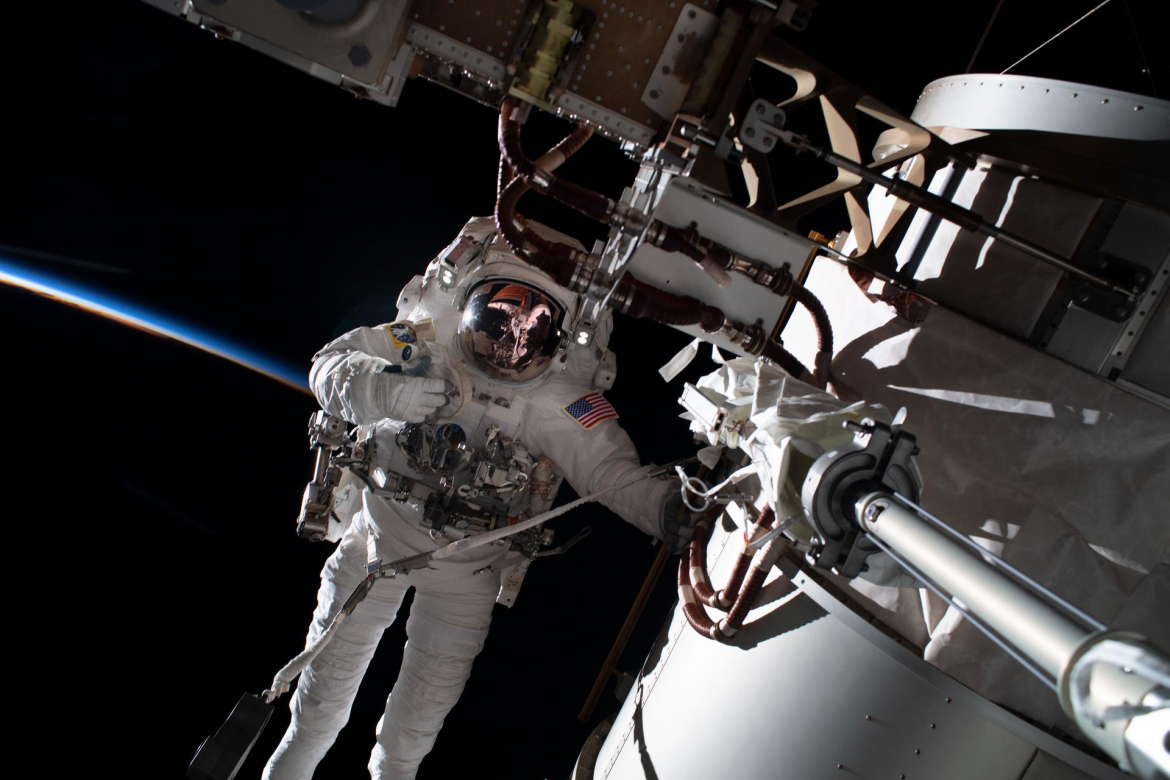 2022 has marked another busy chapter for the International Space Station (ISS). Along with its constant plethora of scientific and engineering experiments, the Station saw the first docking of Starliner, the all-private Axiom-1 mission, and new hardware installed to increase the lifespan of humanity’s collaborative space laboratory.

The year onboard the Station began during Expedition 66, followed by Expedition 67, and has continued with the ongoing Expedition 68. “Expeditions” are approximately 6-month time periods on the ISS that begin and end with certain crew rotations.

Like many other industries and programs, the ISS was also affected by Russia’s invasion of Ukraine which began on Feb. 24 of this year.

The resulting geopolitical turmoil resulted in impacts across the whole aerospace industry — and the ISS was no exception.

Antares, the purpose-built launcher of the Station’s Cygnus cargo resupply spacecraft, is nearing a pause in launches as a result of the war.

The rocket’s first stages have been manufactured by PA Pivdenmash in Ukraine — whose factory was heavily damaged by missile strikes in the war. In addition, each first stage featured two Russian-made RD-181 engines, which Russia banned exports of following the onset of the war. These two factors led Northrop Grumman, which manages and operates Antares and Cygnus, to come up with a domestic redesign of the rocket. 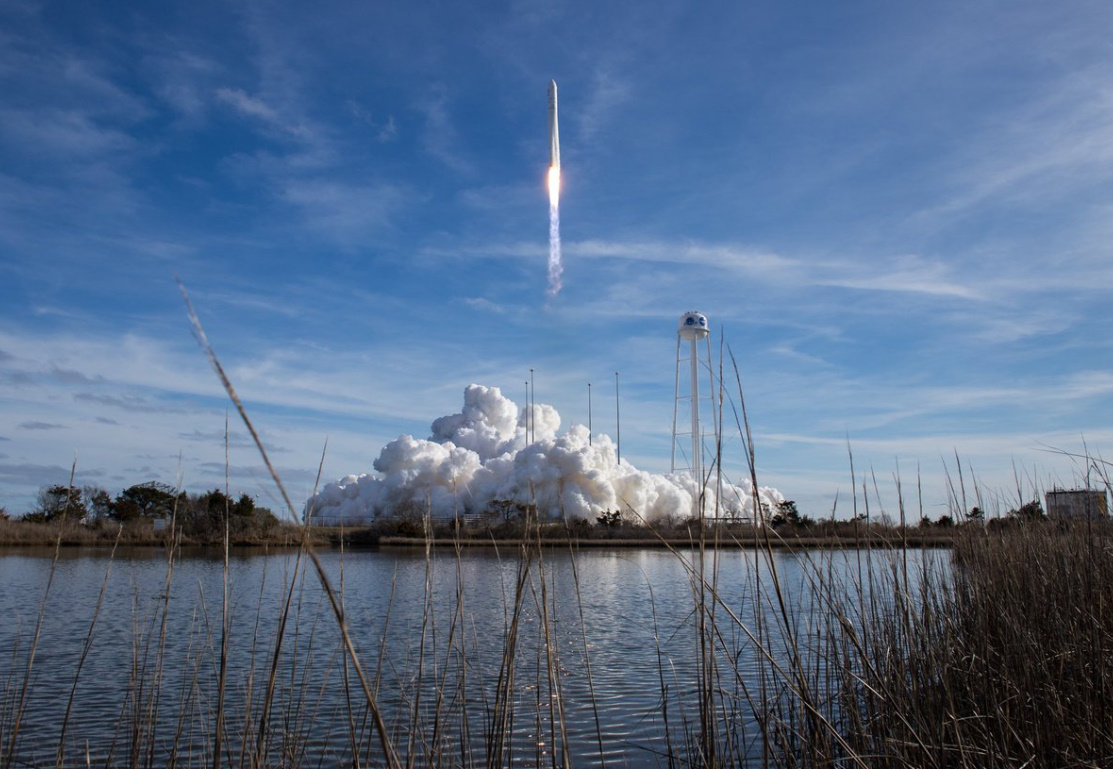 This new 300-series Antares is expected to debut in late 2024, though one remaining 200-series Antares is awaiting launch in February 2023. Three Cygnus missions will then fly aboard Falcon 9 rockets from Cape Canaveral before the spacecraft returns to Antares.

The invasion has also created additional tension between Russia and the numerous other 15 nations that contribute to the ISS program.  However, both the West and Russia have managed to continue working together on orbit and launching joint Russian and American crews on missions to the ISS.

Some of these joint missions have included Soyuz MS-22, which featured NASA astronaut Frank Rubio flying with two other Russians, and the SpaceX Crew-5 mission that carried Anna Kikina, the first Russian on a Commercial Crew spacecraft.

The month of December marked a series of multiple delays and issues onboard the orbiting laboratory. The first of these began on Dec. 14 when a coolant leak on the Soyuz MS-22 spacecraft occurred while cosmonauts Sergey Prokopyev and Dmitri Petelin were depressurizing the Poisk module for an upcoming spacewalk, which was soon after canceled for the day.

NASA later conducted a media teleconference to follow up on the Soyuz leak on Dec. 14. The event featured ISS program manager Joel Montalbano and the executive director for Human Space Flight Programs at Roscosmos Sergei Krikalev.

Problem with Soyuz MS-22 on the ISS right now! pic.twitter.com/V4Ymvnn2D1

Krikalev noted that teams are conducting thermal analysis to further determine if the Soyuz MS-22 spacecraft is safe for a nominal crew return. If teams determine that another spacecraft is needed, he added that Soyuz MS-23 could launch uncrewed to the Station to return Prokopyev, Petelin, and Rubio back to Earth.

Soyuz MS-22 would then undock and return to Earth autonomously if this plan is needed.

According to Montalbano, the leak on Soyuz MS-22 emanated from a single hole. Teams on the ground have not determined if the leak was caused by micrometeorite debris or some other failure. He also stated that teams are also looking for better imagery and video of the anomaly to determine the cause.

During the teleconference, Montalbano added that there were no concerns about the impact of the leak on the Station itself in terms of leakage contamination.

“The direction of the leak was afted starboard, and it boils off very quickly. So, we’re not concerned with any contaminants left on board,” Montalbano said.

The year has also seen the addition of two more ISS Roll-Out Solar Arrays — or iROSAs — to increase the available power aboard the Station. This included a Dec. 22 spacewalk which worked on installing the fourth iROSA, located on the P4 truss segment.

Going into 2023, NASA will install the final two iROSAs onboard the ISS. These six solar arrays are being placed on mounting brackets in front of the existing legacy solar arrays that were launched on NASA’s now-retired Space Shuttles. The older arrays have been slowly degrading — as expected — and are now being supplemented by the iROSAs to help extend the Station’s lifespan. 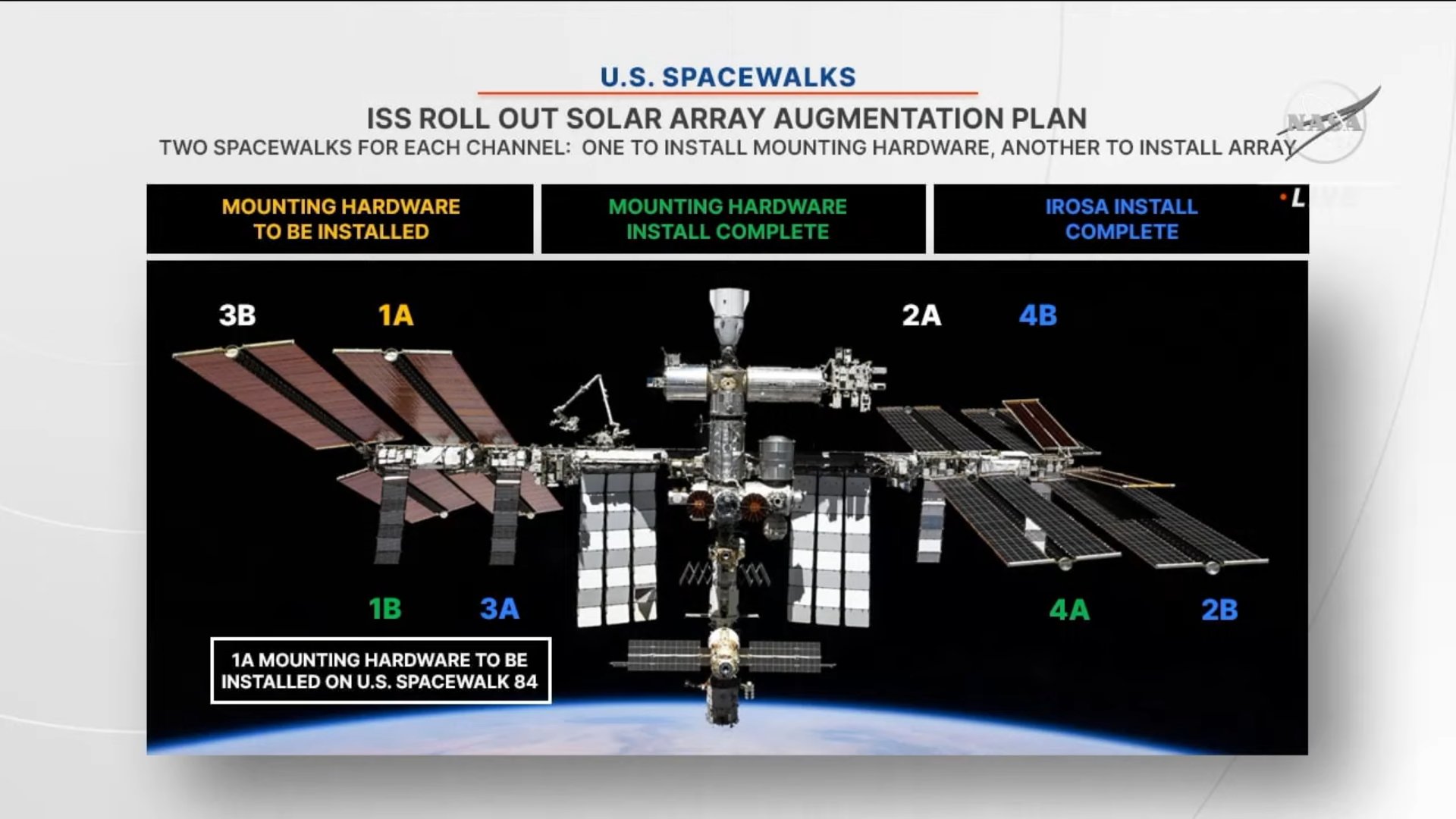 A NASA diagram of iROSA installation progress on the exterior truss segments on the ISS from the Dec. 22 EVA coverage. (Credit: NASA)

The year 2022 also saw a multitude of both departing and arriving spacecraft at the orbiting outpost, ferrying crew and cargo both to and from the Station.

The first spacecraft departure from the Station in 2022 occurred on Jan. 23 with the undocking of SpaceX Cargo Dragon C209 from the zenith port on the Harmony module. The spacecraft later splashed down in the Gulf of Mexico, concluding the CRS-24 mission. It was soon after retrieved by SpaceX’s recovery ship Megan.

On Feb. 15, Progress MS-19 launched from the Baikonur Cosmodrome carrying cargo to the ISS. It later docked to the zenith port on the Poisk module on Feb. 17.

This was then followed by the launch of Northrop Grumman’s NG-17 Cygnus spacecraft from the Mid-Atlantic Regional Spaceport on an Antares 230+ a few days later on Feb. 19. Cygnus then arrived at the Station and was berthed to the nadir port of the Unity module two days later.

The first crewed launch to the ISS in 2022 was the launch of Soyuz MS-21 onboard a Soyuz 2.1a rocket on March 18. The spacecraft docked to the Prichal module’s nadir port later the same day. Soyuz MS-21 was the first all-Russian crewed spaceflight to the ISS.

Expedition 66 ended and Expedition 67 began with the undocking and departure of Soyuz MS-19, which later landed on the Kazakh Steppe.

The next crewed flight to the ISS, Axiom-1, marked a historic milestone: the first ISS mission consisting solely of private astronauts. The crew consisted of Michael López-Alegría, Larry Connor, Eytan Stibbe, and Mark Pathy. The crew arrived at the Station aboard SpaceX Crew Dragon Endeavour on April 9 following a liftoff from Launch Complex 39A at Kennedy Space Center the day prior. 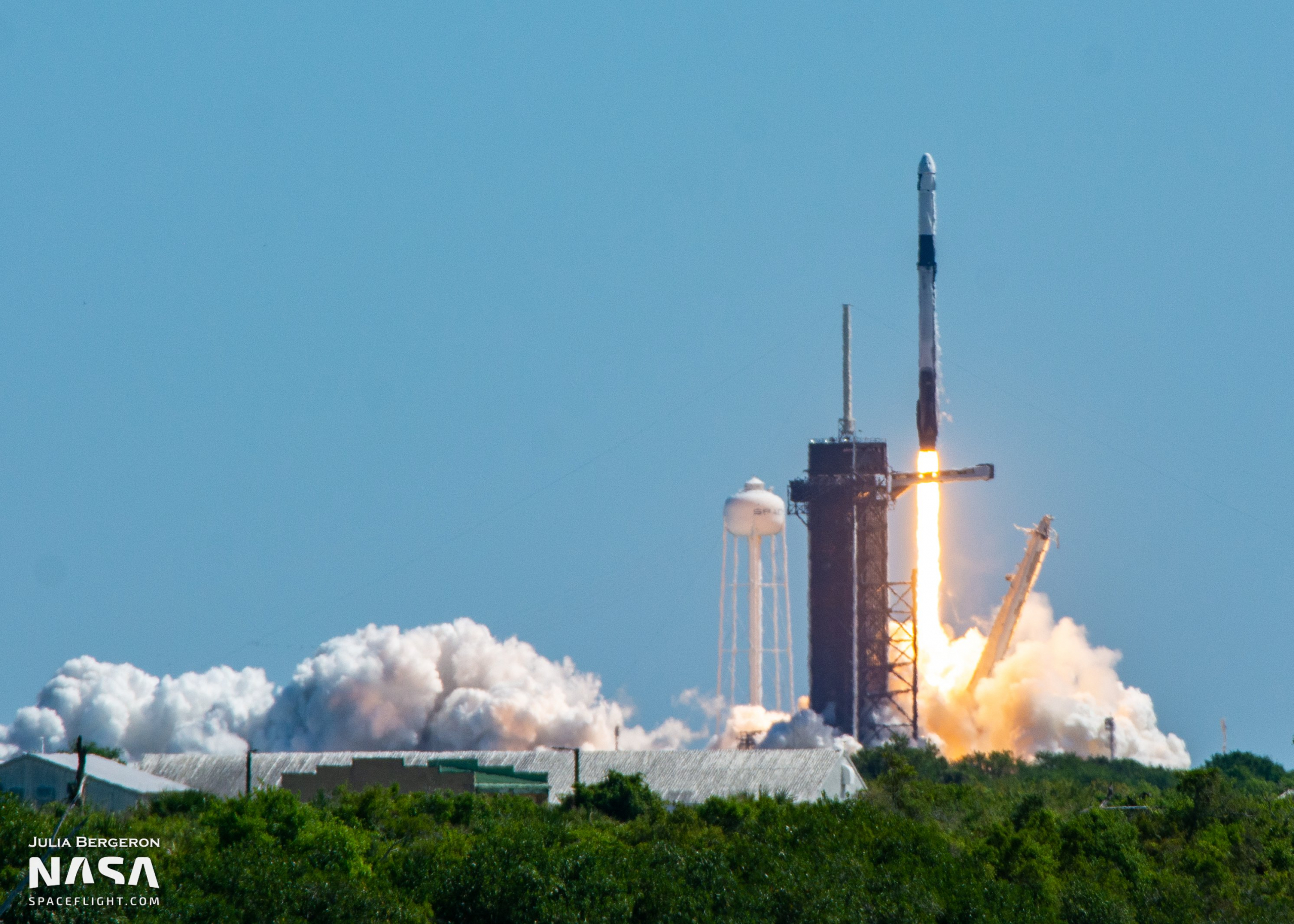 The Axiom-1 mission lifts off from LC-39A. (Credit: Julia Bergeron for NSF/L2)

The Axiom-1 mission also saw the beginning of an era with the involvement of Axiom Space in the ISS program. Axiom is planning on adding its own commercial modules to the Station, which will later split off to form a free-flying space station ahead of the eventual deorbit of the ISS.

Crew Dragon Endeavour later undocked from Harmony with the Axiom-1 crew on April 25 after a total of 15 days docked to the Station. Endeavour splashed down in the Atlantic later that day.

SpaceX followed up Axiom-1 with the launch of the next ISS crew rotation mission — Crew-4 — on April 27, where Crew Dragon Freedom made its first flight into space. The same day, Freedom docked to the zenith port on Harmony. The Crew-4 mission consisted of Kjell Lindgren, Robert Hines, Jessica Watkins, and Samantha Cristoforetti.

On May 5, the astronauts of the Crew-3 mission departed the ISS on Crew Dragon Endurance following the end of a long-duration stay. The spacecraft later splashed down in the Gulf of Mexico.

This year also marked the long-awaited arrival of the Boeing CST-100 Starliner at the Station. Starliner launched atop an Atlas V N22 from Space Launch Complex 41 on May 19. This was a part of the Orbital Flight Test-2 (OFT-2) mission, which was attempting to reach the ISS following the partially-unsuccessful OFT mission in Dec. 2019. 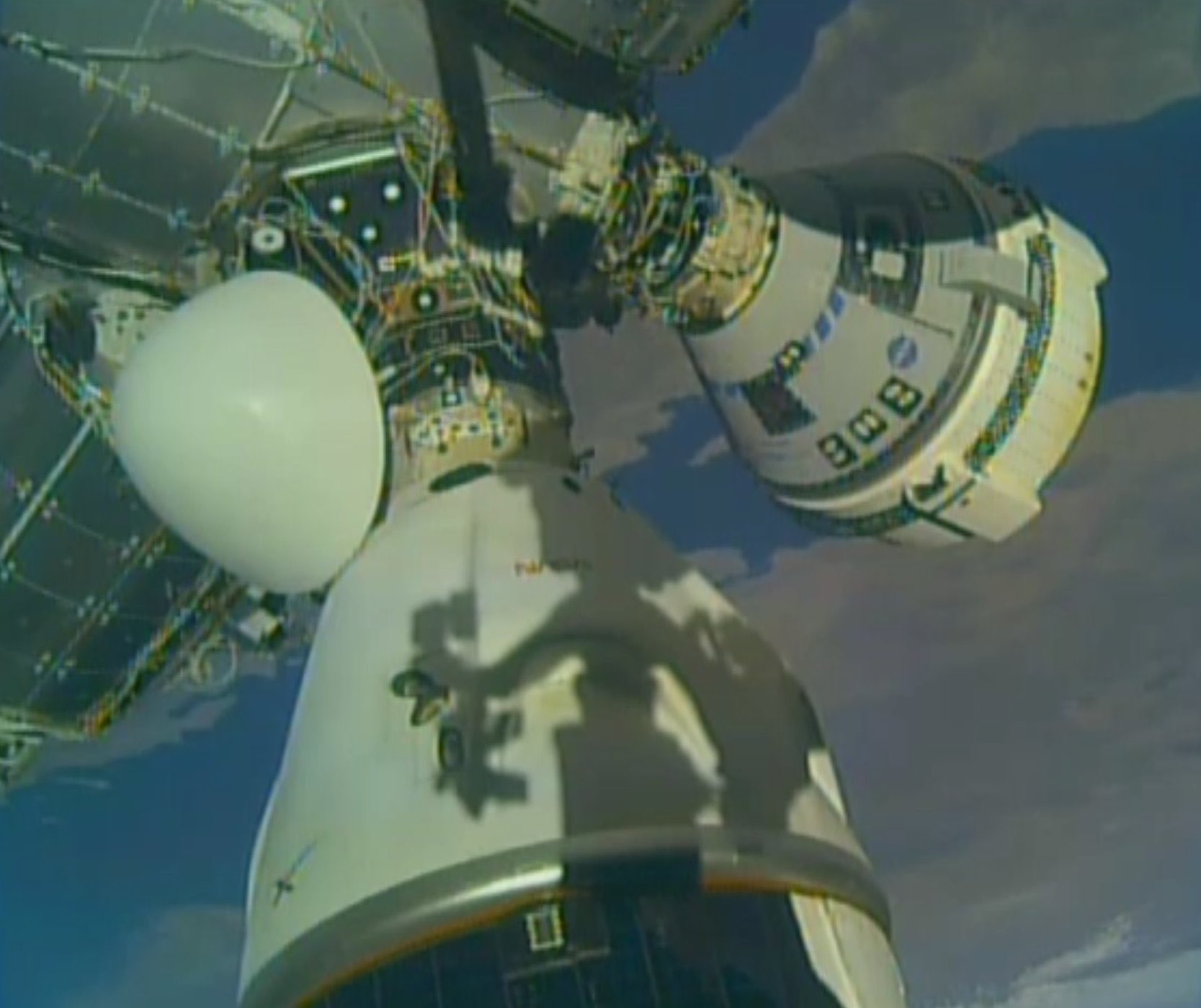 SpaceX’s Crew Dragon Freedom is seen beside the Boeing CST-100 Starliner during the OFT-2 mission aboard the ISS. (Credit: NASA)

For a total of four days, Starliner was docked to the forward port on Harmony, near Crew Dragon Freedom — marking the first time both crew Commercial Crew Program spacecraft were in orbit together. Starliner successfully returned to Earth on May 25.

The NG-17 Cygnus then departed the ISS on June 28. It later conducted a deorbit burn and burned up during reentry over the Pacific Ocean, as expected. Cygnus not only delivers cargo to the Station; it also serves as trash disposal after departure.

Next, SpaceX’s Cargo Dragon C208 arrived at the ISS for the third time on July 16 and docked to the forward port on the Harmony module. This was part of the CRS-25 resupply mission. It later undocked from the Station and returned back to Earth on Aug. 20 along with another load of science collected on orbit for examination back on the ground.

The Russians then conducted their next crew rotation aboard the Russian Orbital Segment. This saw the launch of Soyuz MS-22 with Sergey Prokopyev, Dmitri Petelin, and Frank Rubio, who arrived at the ISS on Sept. 21 and docked with the nadir port on Rassvet.

Crew-5 then launched from NASA’s Kennedy Space Center with Josh Cassada, Nicole Mann, Koichi Wakata, and Anna Kikina on Oct. 5 aboard Crew Dragon Endurance. They arrived at the ISS the next day.

Following this, Crew Dragon Freedom and her crew departed the orbiting laboratory on Oct. 14.

The Station ended the year with the arrival of three cargo resupply vehicles to the orbiting outpost in the form of Progress MS-21, the NG-18 Cygnus, and the SpaceX CRS-26 Cargo Dragon. The NG-18 Cygnus launched on the penultimate Antares 230+ launch.

2023 looks to be another important year as two more brand-new spacecraft launch to the Station — Dream Chaser and Soyuz GVK.

(Lead image: NASA astronaut Frank Rubio is seen on the truss of the ISS during a spacewalk on Nov. 15. Credit: NASA)