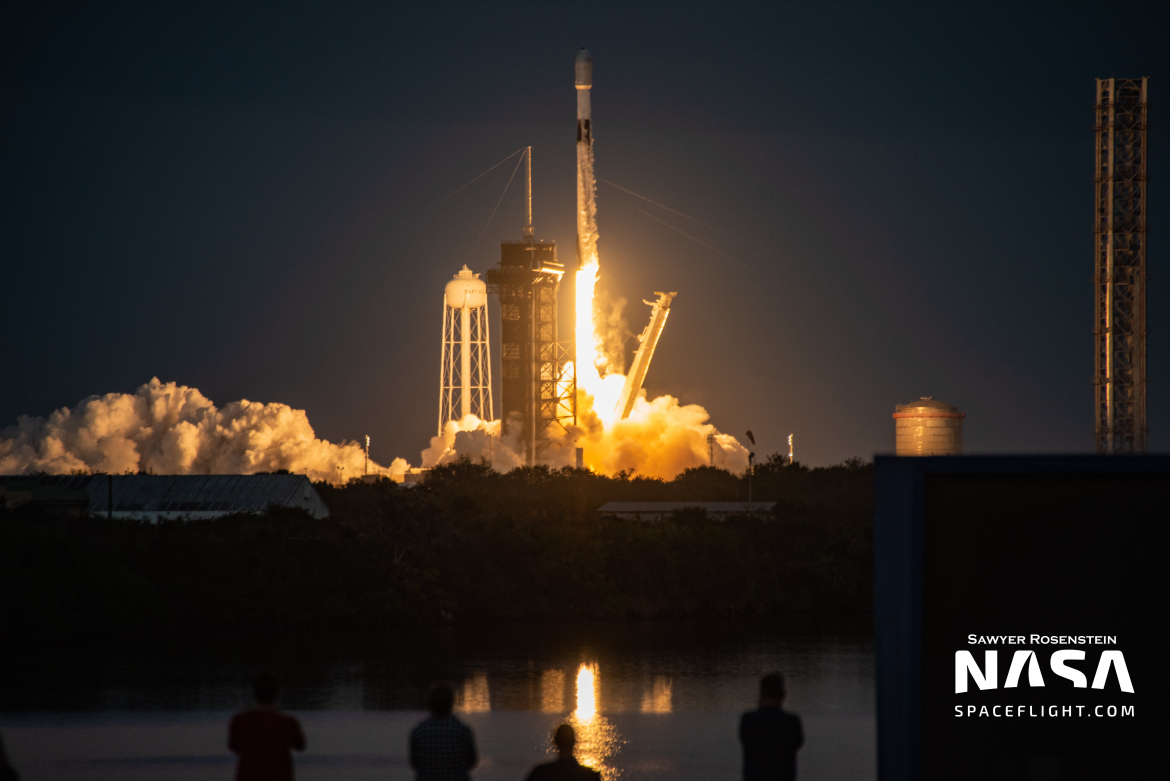 OneWeb Flight #15 was the first of three missions for OneWeb by SpaceX and marked OneWeb’s third overall mission in 2022. Additionally, this launch marked the third rocket OneWeb has flown on.

As a staple of SpaceX’s historic 55-launch year, this mission used a flight-proven first-stage booster, B1069, on its fourth flight. B1069 is a newer booster, first introduced on the SpaceX CRS-24 mission in December 2021. After taking damage during transportation back to Port Canaveral following CRS-24, B1069 didn’t fly again until Starlink Group 4-23, 250 days later. B1069 supported one more flight during the Hotbird-13F mission in October 2022.

After lifting the second stage and Hotbird-13F out of the atmosphere, B1069 landed on the SpaceX Autonomous Spaceport Droneship (ASDS) Just Read The Instructions (JRTI). On Oct. 19, JRTI and B1069 returned to Port Canaveral. A few days later, SpaceX lowered B1069 horizontally and moved it to HangarX for refurbishments.

After refurbishments, SpaceX moved B1069 to the horizontal integration facility (HIF) at LC-39A where they completed the Falcon 9 stack and attached the payload to the rocket.

This launch was the first time a rocket achieved a polar inclination from LC-39A.

In preparation for OneWeb Flight #15, SpaceX converted the transporter/erector (T/E) for a Falcon 9 with a payload fairing. The T/E picked up its reaction frame on Dec. 4 and rolled to the HIF to receive the Falcon 9. On the same day, SpaceX support ship Doug departed Port Canaveral and stationed itself ~600 km downrange to recover the payload fairings. As B1069 landed on Landing Zone-1 (LZ-1), no drone ship was sent out to sea.

With the Falcon 9 stack on the T/E, SpaceX rolled the stack out to the launch site and went vertical.

Thirteen minutes later, stage two RP-1 loading was complete, with a purge of the T/E at T-20 minutes. At T-16 minutes, LOX loading began on stage two. At T-7 minutes, the Falcon 9 first stage chilled its engines with liquid oxygen to ensure there were no thermal shocks to the engines at ignition. The T/E retracted to the launch position at T-4 minutes 30 seconds.

At T-3 seconds, the engine controller commanded the nine first-stage Merlin 1D engines to ignite. A second later, the engines ignited and began a final health check. Once the engines were verified healthy and producing full thrust, the hydraulic hold-down clamps and the T/E retracted, allowing the vehicle to liftoff. 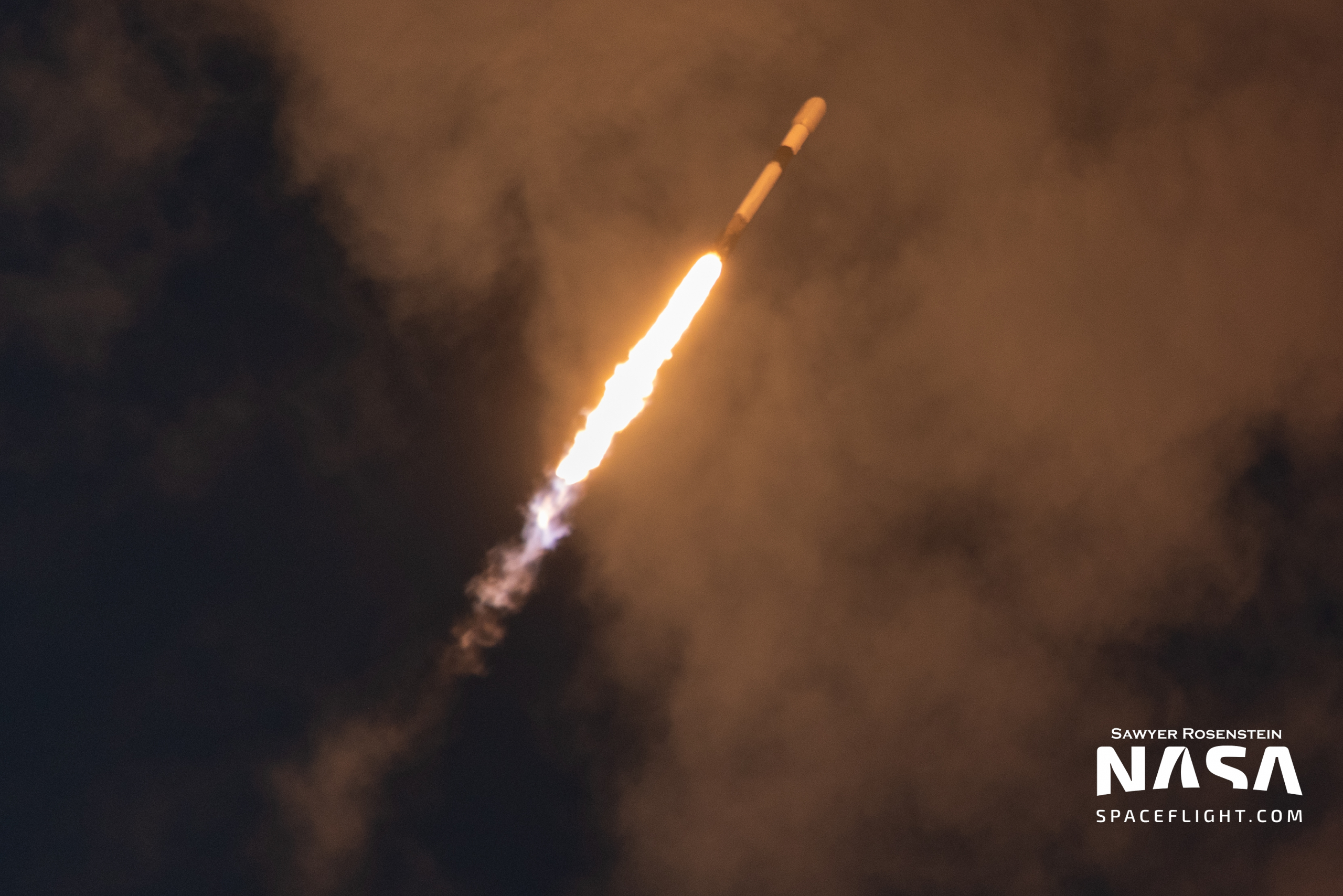 At sunset, Falcon 9 punches through a cloud seconds after lifting off on the first-ever polar launch from the Kennedy Space Center. (Credit: Sawyer Rosenstein/NSF)

Shortly after liftoff, Falcon 9 pitched to follow the proper flight path to reach an 87.4-degree orbit. Initially, Falcon 9 pitched south-southeast and then completed a “dogleg” maneuver to the south to reach the proper azimuth for the desired orbit. The dogleg maneuver is needed to avoid overflight of populated areas on the Florida coast south of the space center.

After one minute and 12 seconds of flight, Falcon 9 reached maximum aerodynamic pressure (Max-Q).

After burning for two minutes and 17 seconds, the nine first-stage engines shut down. A few seconds later, the two stages separated. Second Engine Start (SES)-1 began just after stage separation. At the same time, the first stage began a flip maneuver to head back to LZ-1. After a near 180-degree rotation, the first stage ignited engines one, five, and nine for a 48-second burn back to LZ-1.

Six minutes and four seconds into the flight, the same three engines reignite for the entry burn, which lasted 17 seconds. The entry burn helped protect the stage from the forces caused by reentering Earth’s atmosphere.

Once the entry burn was complete, the first stage descended before reigniting engine nine one last time for the landing burn. The nearly 30-second burn allowed for a gentle landing on LZ-1. B1069-4 was redesignated B1069-5 at landing. SpaceX will now move B1069 off of LZ-1 to refurbish the booster for a future mission. 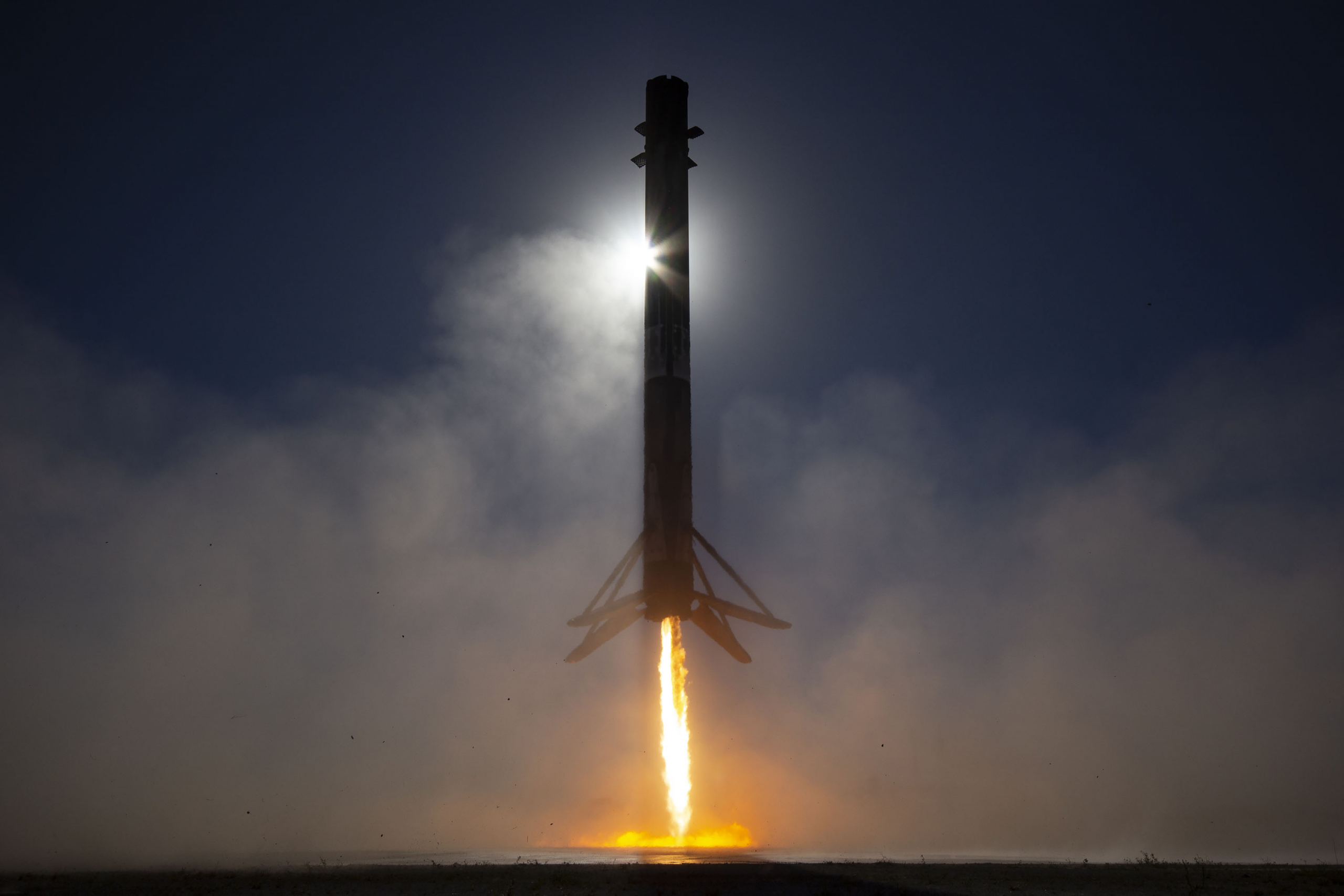 While B1069 returned to LZ-1, the second stage continued to orbit. The payload fairing separated just over three minutes into the flight, exposing the 40 OneWeb satellites to space. The fairings were recovered ~604 km downrange by Doug.

Stage two burned until reaching an initial low Earth parking orbit. The second stage then coasted to apogee for a short and final four-second burn. In this final orbit, the OneWeb satellites separated from the payload adaptor over span of just more than 30 minutes.

OneWeb is a global communication provider with the second-largest satellite constellation. The company began launching its satellites in February 2019. Since then, the company has seen most launches from Soyuz and a singular GSLV Mk. III launch.

OneWeb selected Airbus to build the satellites in 2015.

Airbus built the first set of satellites at their factory in France before the satellites’ primary production moved to Florida. OneWeb satellites are small, ~148 kg, and use electric propulsion to raise and keep their 1,200 km orbits. Twin solar panels power the spacecraft and its Ku-band antennas. With 40 satellites on Launch #15 – the most OneWeb satellites launched at once – the total mass on Falcon 9 is ~6,000 kg.

More exciting news ahead of launch as we confirm the successful encapsulation of all 40 satellites.

Huge thanks goes to our colleagues on site for reaching this milestone.

You can find more information on Launch #15 on our website at:https://t.co/YpHxj4H4Iy#OneWebLaunch15 🚀 pic.twitter.com/k3vwFsP2a5

The first operational launch with 34 satellites took place a year after OneWeb Launch #1, on Feb. 6, 2020. OneWeb and Arianespace completed 12 more launches until Feb. 10, 2022, when the final launch with a Soyuz took place.

Launches on Soyuz halted and were abandoned shortly after the Russian invasion of Ukraine, when, shortly after, OneWeb signed launch contracts with SpaceX and India to launch its remaining satellites.

India launched the first of its two missions in October 2022 with 36 satellites. SpaceX will launch three missions, with its next scheduled for January 2023. Following Launch #15, OneWeb will have three more total launches before its initial constellation is complete.