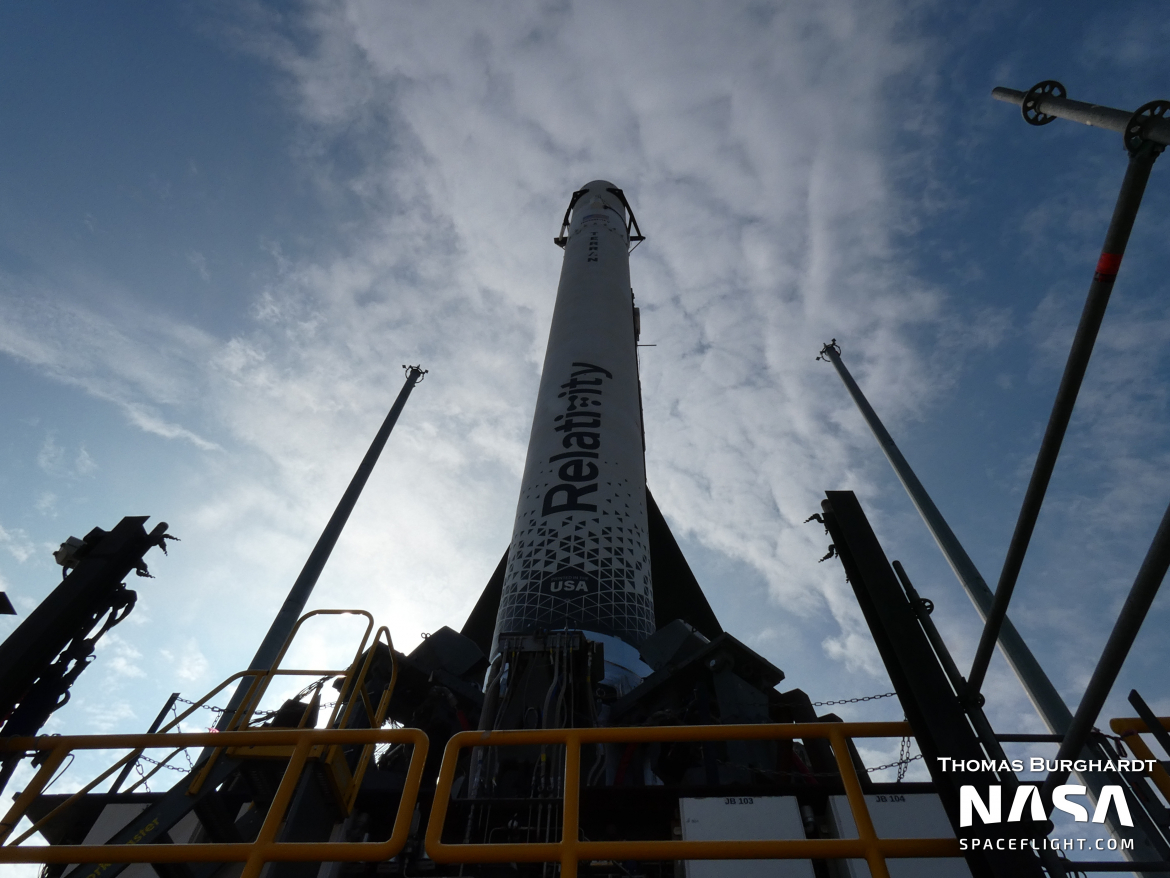 The first fully integrated static fire test of Relativity Space’s Terran 1 rocket is expected any day now as the company prepares for its first-ever launch from Florida. Following a series of tests of the rocket’s first stage, the second stage and nosecone were assembled, and the entire vehicle has now rolled back to the pad on the transporter/erector.

While Relativity’s near-term focus remains on Terran 1’s maiden flight, the company is also planning for and even testing hardware for its next rocket, the larger and fully reusable Terran R.

Terran 1 Testing Ahead of Maiden Flight

Terran 1’s pre-launch testing has been taking place at Space Launch Complex 16 (SLC-16) at the Cape Canaveral Space Force Station in Florida, the same pad that the rocket will lift off from on its first flight. During the first series of tests, only involving the first stage of the rocket, a purpose-built test stand was placed on the launch pad rather than the launch mount that will be used for flight.

Our most recent spin-start test with all 9 (entirely 3D printed) Aeon 1 engines on Stage 1 🔥 As one of the few liquid oxygen/liquid natural gas fueled rockets in the industry, Terran 1 is racing to be the 1st LOX/LNG rocket to fly.  More on #GLHF here https://t.co/CCqeeuinKC pic.twitter.com/cKaWs0wnQa

A pair of spin-start tests on Terran 1’s first stage was completed on July 18 and 21 of this year. This was followed by hot fire tests, which not only started the nine Aeon 1 engines but allowed them to reach full thrust before shutdown. The first of these hot fire tests occurred on July 27 and lasted six seconds.

Once complete engine ignition was achieved, the next goal was to work toward firing the first stage for the full duration that will be needed during the flight from liftoff to stage separation. This type of “mission duty cycle” test is usually done on dedicated test stands rather than on the launch pad, but the test stand being used in place of the launch mount at SLC-16 enabled Relativity to streamline operations and complete long-duration firings on the launch pad.

“To our knowledge, no other company has ever actually done a full flight duration test on the actual launch mount, or launch pad, at Cape Canaveral,” said Relativity CEO Tim Ellis, in an August interview with NASASpaceflight.

The second hot fire test on Aug. 22 reached the full planned duration of 20 seconds, setting the stage for the full flight duration attempt. The first such attempt on Sept. 20 reached a duration of 57 seconds, and another on Sept. 23 reached 82 seconds. 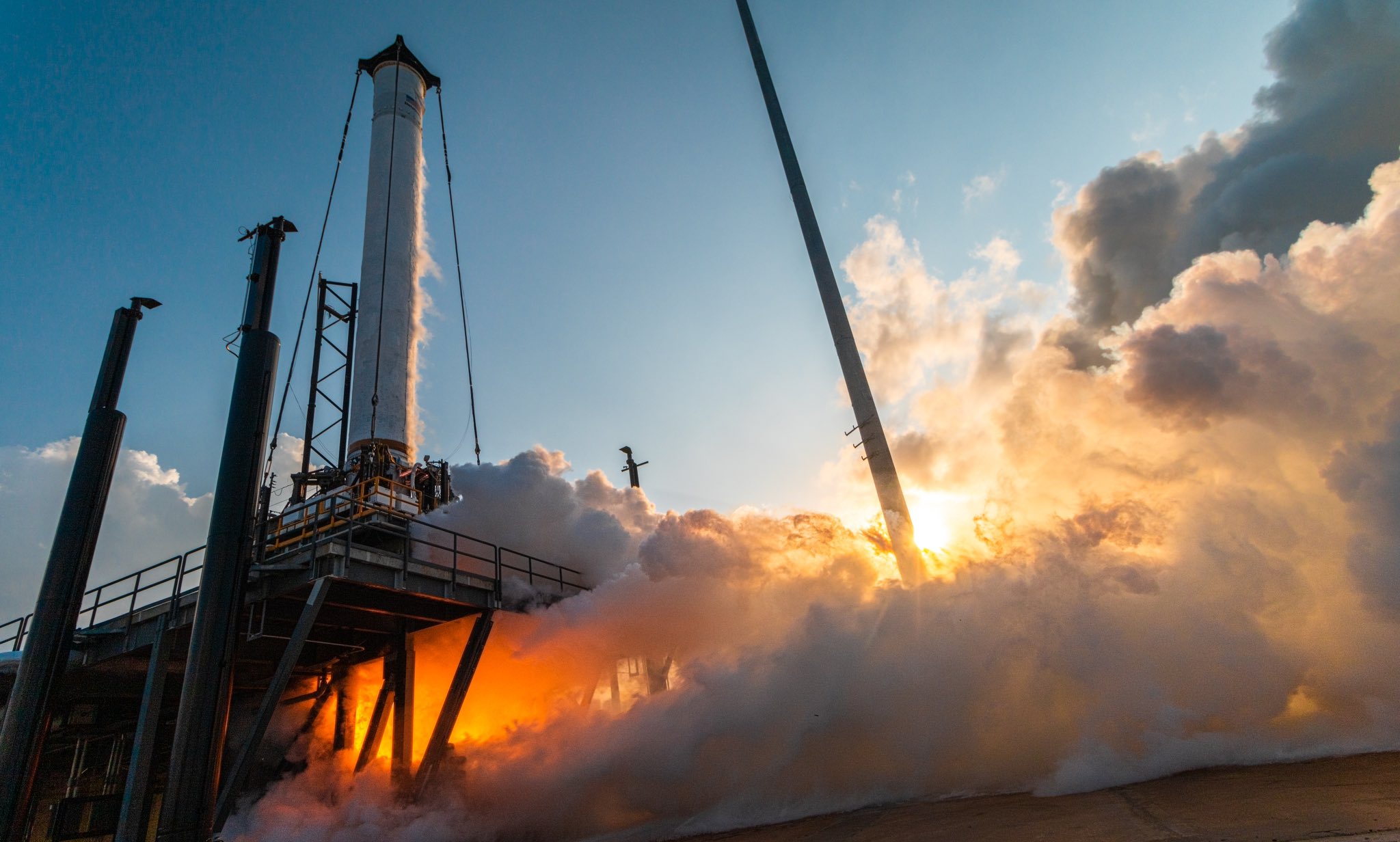 It was at this point in the test campaign that Hurricane Ian necessitated that the vehicle be rolled back into the hangar at SLC-16. After reviewing the data gathered to that point, the teams decided to proceed with the integration of the rocket’s upper stage and nosecone and rolling back out to the pad for a final short-duration checkout test before launch.

“That one should be very quick and really not take that long… Really, you’re just looking for different modal frequencies or other things that may look a little bit different than when you don’t have stage 2 on top. But you also, at that point, don’t really need to go retest a lot, or add a lot of risks, frankly, at that point.”

Preparing for this test involved removing the test stand from the pad and installing the actual launch mount that will be used to release the rocket at the exact time needed to attempt orbit.

“The biggest difference is, and the biggest added complexity, is all that the hydraulics that you have to have in order to have accurately timed release of the rocket,” said Ellis. “A lot of that timing has to be within milliseconds in certain cases to make sure you release the rocket cleanly.”

(Video caption: NASASpaceflight’s latest aerial photography of Cape Canaveral, including SLC-16, as well as footage from on the ground at the pad and Relativity’s launch control center.)

Once integrated, the rocket was rolled out and raised vertical at the pad using the transporter/erector for the first time, rather than using cranes to lift the vehicle onto the test stand.

Once fully integrated static fire testing is complete, the vehicle will be lowered back to horizontal and rolled back into the hangar for final checkouts before launch. The first flight is nicknamed “Good Luck Have Fun,” in reference to the common phrase used in video gaming, just like the Terran family of rockets references the popular game StarCraft. 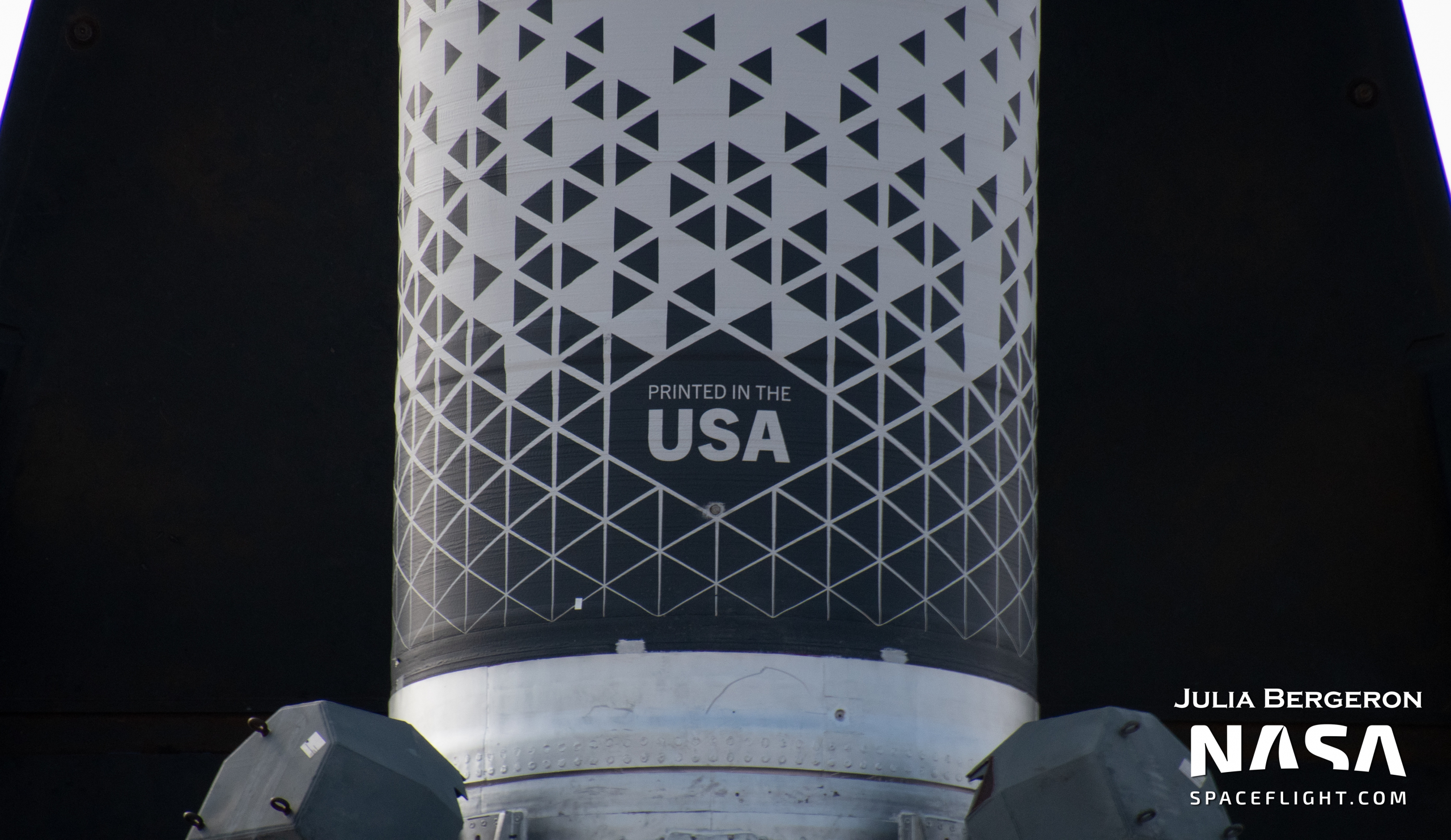 A closeup of the aft end of Terran 1, showing the “Printed in the USA” text in reference to the rocket’s 3D-printed construction. (Credit: Julia Bergeron for NSF)

The flight has no payload or even a payload fairing, as the goal of the flight is simply to prove the strength of the additive manufacturing methods used and the vehicle’s performance. Instead, a nosecone is on top of the second stage, to be replaced with an encapsulated payload on operational missions.

While the team’s current focus is on flying Terran 1 in order to begin delivering payloads to orbit, work also continues developing the company’s bigger Terran R rocket. While experience gained via Terran 1 will inform development and designs for Terran R, Ellis said that the company does not plan to cancel the smaller vehicle in favor of the larger one.

“I think the biggest difference is there is actually a huge market for that payload size. And Terran 1 is quite a bit larger than Falcon 1 ever was. So Terran 1’s baseline payload is 1,250 kg payload to LEO, 900 kg payload to a Sun-synchronous orbit. So that’s pretty significant.”

One way the company plans to leverage the Terran 1 vehicle as a testbed is to replace the nine Aeon 1 engines on the rocket’s first stage with a single Aeon R, the engine that will power Terran R. This will act as both an upgrade to Terran 1 and a way to gain flight experience ahead of Terran R.

Aeon R has been the highlight of Terran R development to date, including subscale and full-scale testing. These tests have been conducted at Relativity’s facilities at NASA’s Stennis Space Center in Mississippi.

This may look like all our other engine tests but it’s not… first Aeon R full-scale hot fire test! 🔥 goal by the team, this was 35% power level of the 268,000 lb max thrust. These brand new 3D printed engines will power Terran R. Massive push to get this done so quickly 🤯🤯🤯 pic.twitter.com/lA2pgLJ8LW

In December, the Aeon R team reached the milestone of the first full-scale hot fire test, firing a full-size Aeon R thrust chamber at 35% power. Future tests will increase the power level and add other components, such as turbopumps, until a complete engine can be tested.

The first tests of a complete engine are expected as early as 2023.

Terran R will not only serve as a mass-to-orbit upgrade over Terran 1 but will also add reusability to enable low-cost launch services for a variety of missions, including sending a commercial payload to Mars.

“We’ve sold $1.2 billion dollars worth of commercial contracts on Terran R over the last three months, and we’ve not finished all of the contracts currently in work for that vehicle.”