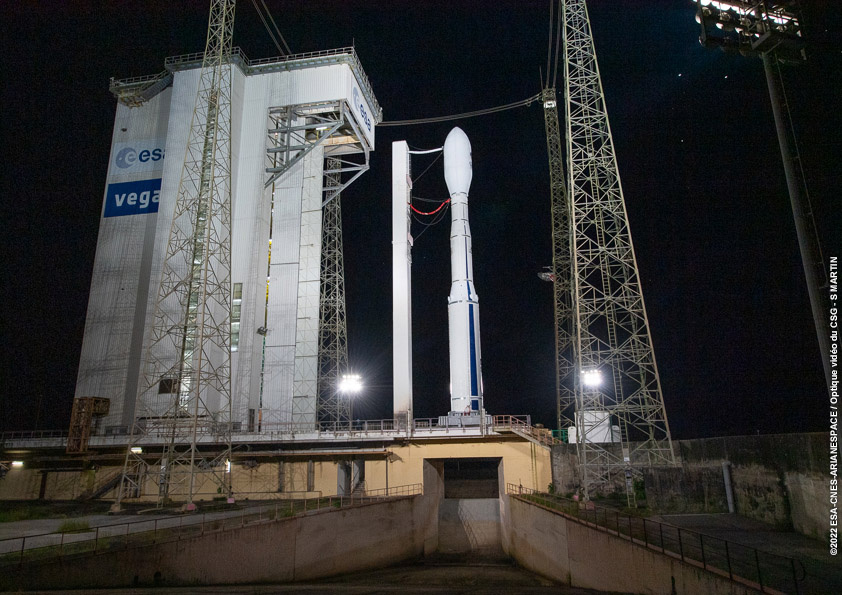 Arianespace has suffered a failure during Vega-Consolidation’s (Vega-C) first operational launch, which was set to carry the Pléiades Neo 5 and 6 Earth-observation satellites to a Sun-synchronous orbit (SSO). Vega-C lifted off from the Ensemble de Lancement Vega (ELV) pad at the Guiana Space Centre on Dec. 20 at 10:47 PM local time (01:47 UTC on Dec. 21).

Designated Vega Vehicle 22 (VV22), the rocket was the second Vega flight of the year and Arianespace’s fifth mission of 2022. VV22 was originally set to launch in November 2022, but a component in the upper composite in the payload fairing needed to be replaced. The launch failure occurred during stage 2 flight, with CEO Stephane Israel citing an “underpressure” indicated during that stage’s burn.

Vega-C is a four-stage launch vehicle and the newest rocket operated by Arianespace. The rocket was introduced in July 2022 as the latest member of the Vega rocket family and an upgrade to the original Vega rocket. On Vega-C, the first and second stages both feature a new solid rocket motor, the third stage is the same as on Vega, and the fourth stage is an upgraded version of the original Vega’s fourth stage. 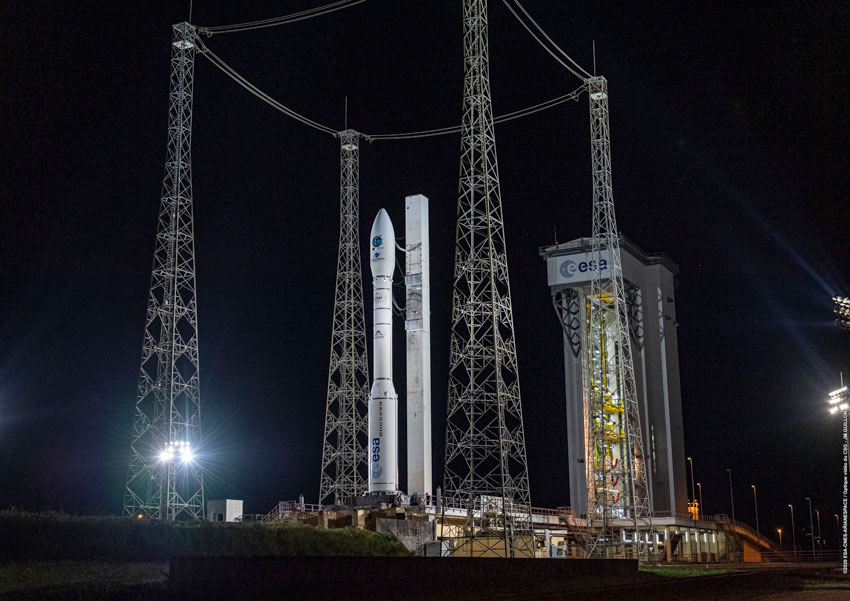 Vega is the small-class satellite launcher in Arianespace’s fleet of rockets. Since its introduction in 2012, the Vega family has flown 21 times with 19 successful missions. Vega-C took its first flight on VV21, which — unlike this mission — was operated by the European Space Agency (ESA). VV22 was the first time Arianespace operated a Vega-C flight.

Vega-C’s first — and largest — stage uses a single P120 Common (P120C) solid rocket motor. The P120C is an all-new solid rocket motor that replaces the smaller P80 first stage on the original Vega. The P120C generates an average of 4,500 kN of thrust across an approximate two-minute burn with a specific impulse of 278.5 seconds.

It is comprised of a single carbon fiber structure that sets it apart from other solid rocket motors with a 3.4-meter diameter width and a 13.5-meter length — making it the largest single-piece solid motor ever launched.

The C, or “common,” in P120C denotes the use of the motor on both Vega-C and the forthcoming Ariane 6 rocket. Ariane 6 will replace the currently-operational Ariane 5 rocket and will use either two or four P120 motors depending on mission requirements. Later, in both Ariane 6 and Vega-C’s lifespan, an upgraded P120+ motor will be introduced, giving both vehicles more performance when lofting payloads to orbit.

On top of the first stage is the new Zefiro-40 (Z40) solid rocket motor developed for Vega-C. It replaces the smaller Z23 used on the original Vega rocket. The Z40 has a diameter of 2.3 meters and a length of 7.6 meters, which is shorter than the Z23. At peak thrust, Z40 is designed to generate 1,304 kN of thrust with a specific impulse of 293.5 seconds in its 92.9-second burn.

Vega-C’s third stage — which is the same as that of the original Vega — is the Z9 solid motor. Z9 has a diameter of 1.9 meters with a length of 4.12 meters. In a vacuum, Z9 will generate 317 kN with a specific impulse of 295.3 seconds over a burn time of 119.6 seconds. The nozzle on the motor uses electro-mechanical actuators to provide +/- six degrees of movement.

Vega-C’s fourth and final stage is the AVUM+, or Attitude & Vernier Upper Module+. The stage sports a few upgrades from the original AVUM, such as having a lighter structure and larger propellant tanks for increased performance. The main engine provides 2.45 kN of thrust with a specific impulse of 314.6 seconds.

Unlike the other stages, AVUM+ is liquid-fueled, utilizing the liquid hypergolic propellants NTO and UDMH. The storable propellant allows for a total burn time of 924.8 seconds with up to seven engine burns.

The increased performance of Vega-C allows Arianespace to launch 3.3 metric tons into low-Earth orbit (LEO) and 2.3 metric tons to SSO. This increased mass-to-orbit allows Vega-C to carry two Pléiades Neo satellites to orbit — unlike Vega, which would have only been able to lift one satellite at a time to SSO.

Pléiades Neo is a high-resolution Earth observation satellite constellation that is built, operated, and owned by Airbus Defence and Space. The constellation has its roots in the Satellite Pour I’Observation de la Terre (SPOT) constellation, which translates to “satellite to observe Earth” in English.

Astrium (now Airbus) and the French National Space Agency (CNES) started a partnership in 2012 to create an offshoot of the SPOT constellation. Named Pléiades-High Resolution, the constellation allowed for 50-70 cm resolution observations, with two satellites giving daily revisit capabilities. The first two satellites were launched in 2011 and 2012. In 2012 and 2014, SPOT 6 and 7 were launched into the same orbital plane, allowing for four-satellite daily coverage in orbit. 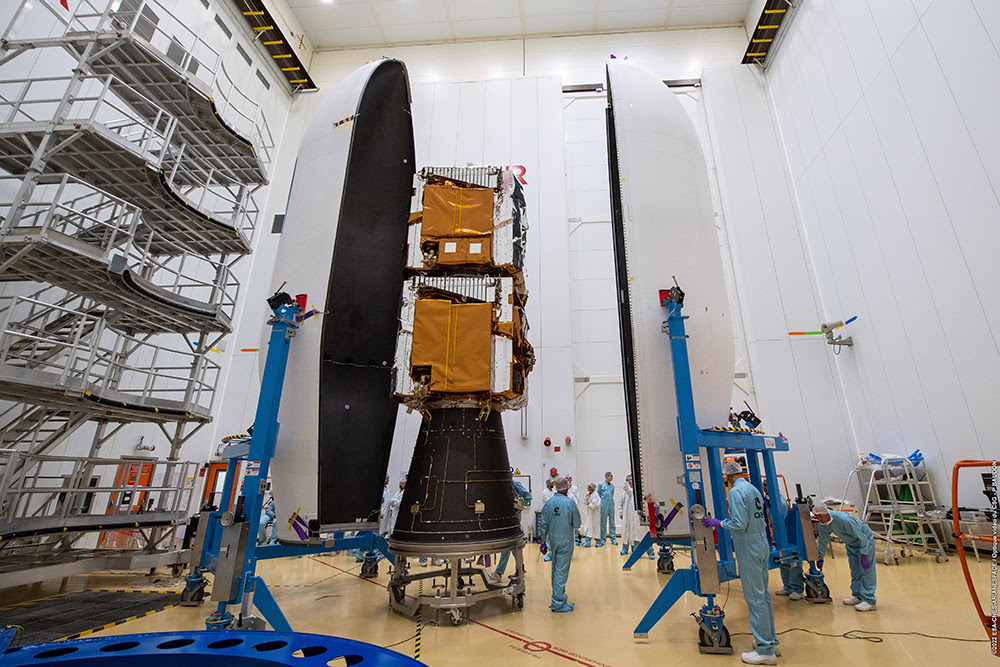 With the satellites aging and Earth observation technology improving, Airbus began developing the Pléiades Neo constellation as a follow-up. Pléiades Neo is set to be comprised of four near-identical satellites that allow for 30 cm resolution observations of Earth’s surface. Each satellite uses two circular solar arrays and laser communications to allow for near-real-time access to images. The satellites each have a mass of 920 kg.

The first two Pléiades Neo satellites, 3 and 4, were launched on back-to-back Vega missions in 2021. Pléiades Neo 5 and 6 — the next two — completed pre-launch testing in the first half of 2022. In May 2022, Airbus stacked the two satellites as a test before delivery via an Antanov An-124 plane to French Guiana on October 22, 2022. Shortly after delivery, the two satellites were encapsulated in Vega-C’s fairing and stacked atop the rocket.

Once the rocket was prepared for liftoff on launch day, the first stage ignited at T0, committing Vega-C to flight. Vega-C then began a pitch maneuver shortly after liftoff to achieve the proper flight profile.

After the P120C motor burned through its fuel, the motor separated, followed shortly after by the ignition of the Z40 motor just two minutes after launch. It was during this phase of flight that the mission failure occurred.

Had the Z40 burned out nominally, it would have also separated, allowing the Z9 motor to ignite four minutes 32 seconds into flight. With the vehicle out of the atmosphere, the payload fairing would no longer be needed and would have separated from Vega-C at T+ four minutes 43 seconds.

Just over seven minutes into the flight, the Z9 motor would have burned out and separated, releasing AVUM+ into free flight. AVUM+ was to ignite its engine approximately one minute after separating from Z9 for a first burn, lasting nine and half minutes, to place the satellites and AVUM+ into their initial elliptical orbit. AVUM+ would then have coasted to apogee for about 35 minutes and re-lit its engine for a two-minute and 30-second burn to reach a 619 x 637 km orbit inclined 97.89 degrees to the equator.

Once in this orbit, Vega-C would have released the Pléiades Neo 6 satellite first at T+56 minutes.

After another six-minute and 39-second coast, a small 15-second thruster firing would have occurred, followed by another 36-minute coast period. Then, the third AVUM+ burn would occur at the end of the coast to reach a 605 x 622 km orbit. Vega-C would then release the Pléiades Neo 5 satellite into the lower orbit.

AVUM+ is designed to complete one final burn at the end of a nine-minute coast following Pléiades Neo 5 deployment to deorbit itself.

Further information about the cause of the failure, corrective actions, and the effects on the operation of the Pléiades Neo constellation will likely come after an investigation is completed.