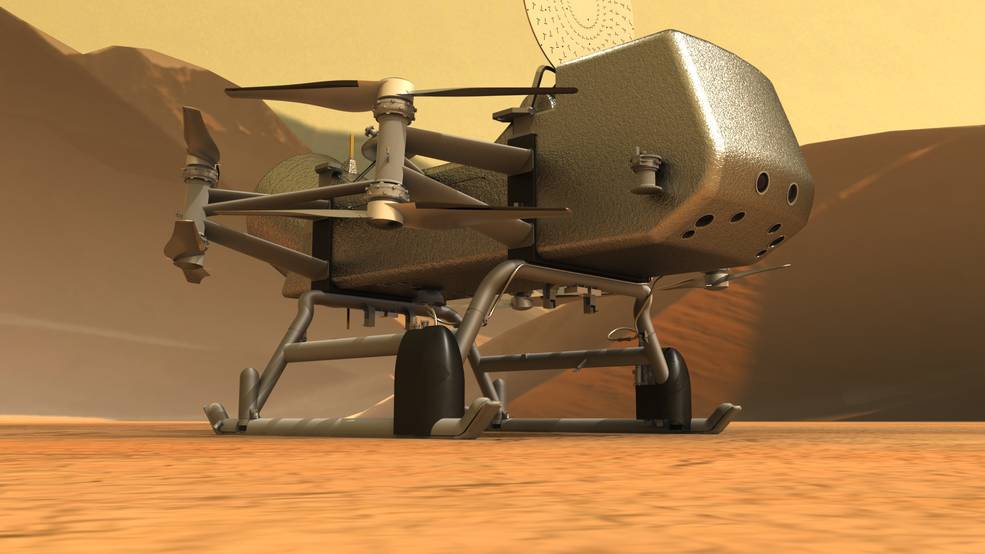 Dragonfly, NASA’s unique robotic exploration mission using a rotorcraft to fly a science laboratory around the surface of Saturn’s moon Titan, is continuing to march through its preliminary design steps.

Rotor design and testing for the craft as well as Preliminary Design Reviews (PDRs) from Lockheed Martin on the subsystem portions of their contracted elements for Dragonfly are all proceeding ahead of the overall mission-level PDR slated for February 2023.

The Dragonfly mission, proposed by the Johns Hopkins University Applied Physics Laboratory (APL), was selected by NASA as the fourth New Frontiers program flight on June 27, 2019.

After arriving on Titan, Dragonfly will fly itself from exploration point to exploration point across a portion of Saturn’s moon. It will utilize vertical takeoffs and landings, a capability recently tested on an extraterrestrial world for the first time by the Ingenuity rotorcraft that rode along to Mars with the Perseverance rover in 2020. 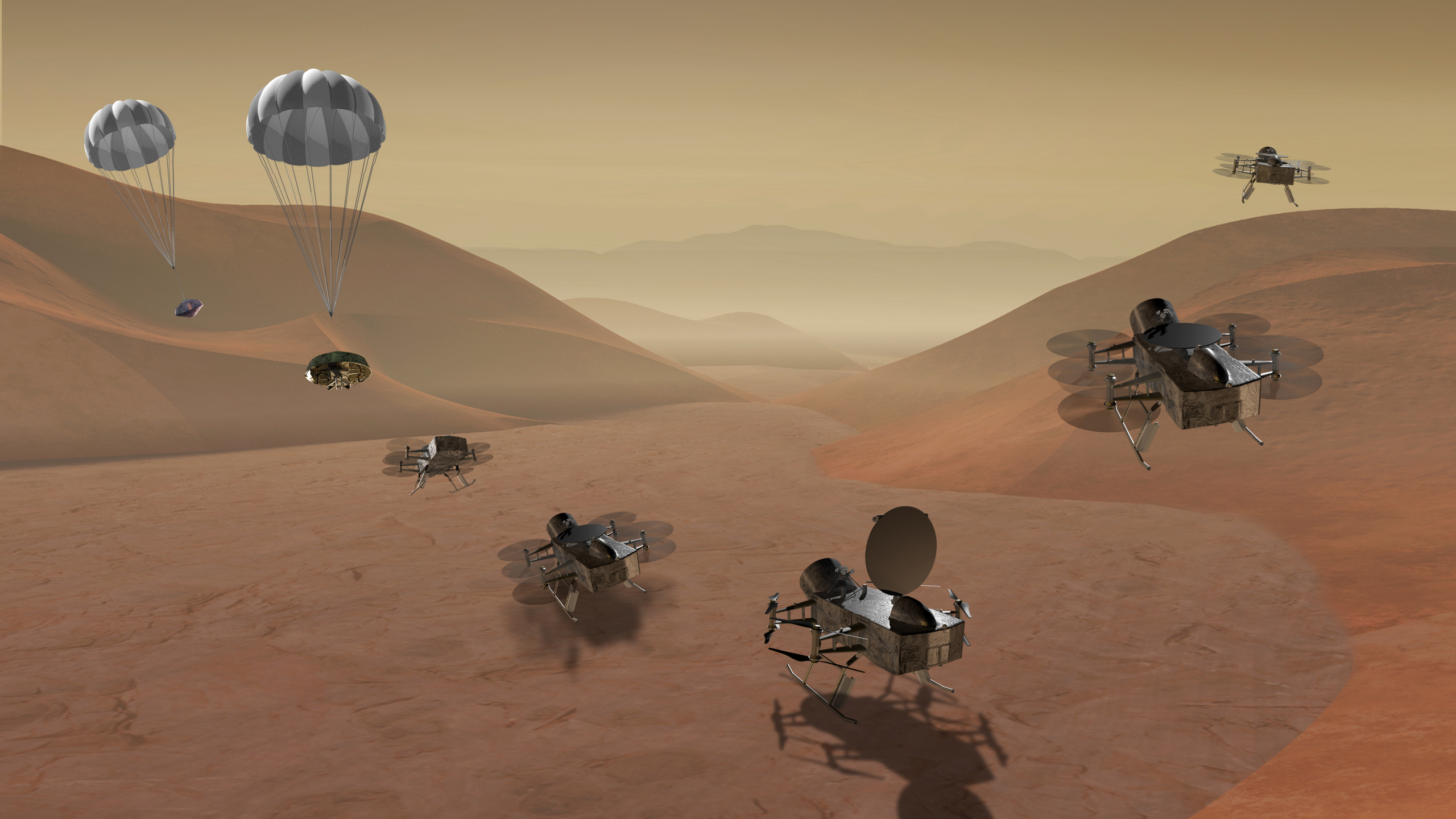 The dual-quadcopter design of Dragonfly, seen in this artist’s render (left to right) in the arrival, landing, and operational phases of its mission on Titan. (Credit: NASA)

Dragonfly will enable an astrobiology mission to assess Titan’s microbial habitability and study its prebiotic chemistry. The mobile nature of the mission will allow sampling from numerous geologically diverse sites.

Titan is a prime target for astrobiologists due to its abundance of complex carbon-rich chemistry and the fact that liquid hydrocarbons exist on its surface. Liquid hydrocarbons hold the possibility of forming a prebiotic primordial soup – a leading theory for how life first emerged on Earth.

But to perform its mission, Dragonfly first needs to be built and then safely delivered to Titan.

Lockheed Martin is the prime contractor for the design, fabrication, and testing of Dragonfly’s cruise stage as well as the aeroshell, backshell, and thermal protection systems. These will be utilized during the mission’s cruise and nail-biting entry, descent, and landing (EDL) phases.

The aeroshell will, in part, protect Dragonfly from the extreme conditions of interplanetary space during the planned approximately six-and-a-half-year cruise out to Titan.

One item that mission designers have to contend with at this stage of planning is the fact that the launch vehicle has not yet been selected, and the launch vehicle ultimately chosen will dictate the precise transit time from Earth to the Saturnian system.

While generalized timelines can be assessed and presented to launch companies by NASA for mission needs, the exact duration of an interplanetary cruise depends on several factors. These include the total amount of energy the launch vehicle can impart to the payload, which interplanetary window (if more than one is available) is chosen to launch within, and the exact day in that window that the launch occurs.

Regardless, it will be a long cruise, and that presents challenges over past missions that have used interplanetary aeroshell cruise stages — mainly those that have delivered rovers to Mars.

This may one day fly in the atmosphere of Titan! 🚁

A key component of the 8-rotor Dragonfly vehicle that will make that journey to Titan recently underwent testing at the Transonic Dynamics Tunnel at @NASA_Langley.

“One of the challenges to this mission is that we’re using the heat overall that’s generated by the lander’s power system to heat the whole spacecraft,” said Dave Buecher, Lockheed Martin Dragonfly program manager, in an interview with NASASpaceflight.

“From a heating and control side, that heat is pumped up from the lander, through the aeroshell, and up to the cruise stage. And there’s radiators and thermal control onboard the cruise stage to help modulate the temperature of the different elements.”

That generated heat from Dragonfly’s radioisotope thermoelectric generator (RTG) can then be dispersed into space by the cruise stage’s radiators if it is not needed. Conversely, the radiators can be shut down if the heat needs to be retained.

Another major function of the cruise stage will be long-range communications back with Earth.

The cruise stage will be outfitted with antennas capable of talking to the Deep Space Network at the necessary bit rates when dealing with distances out to Saturn – which at minimum are 1.2 billion kilometers with a minimum signal delay time of 66.7 minutes one way.

Nonetheless, communication will be controlled by Dragonfly itself as the rotorcraft serves as the “brains” of the mission even during the cruise phase.

In addition, spin-stabilization rates, attitude, and orbital trajectories will be controlled via a series of thrusters.

Following the cruise phase, Lockheed Martin’s aeroshell will separate from the cruise stage and protect Dragonfly and the various landing systems upon entry into Titan’s atmosphere.

While a similar aeroshell design to those of the Mars rover missions will be utilized for Dragonfly, its entry characteristics into Titan’s atmosphere will differ greatly from those of its Martian counterparts.

Per Lockheed Martin, one of the interesting elements in terms of EDL planning for Dragonfly is that Titan’s atmospheric pressure is about one-and-a-half times that of Earth’s, a stark contrast to the scant atmosphere of Mars when also compared to Earth. 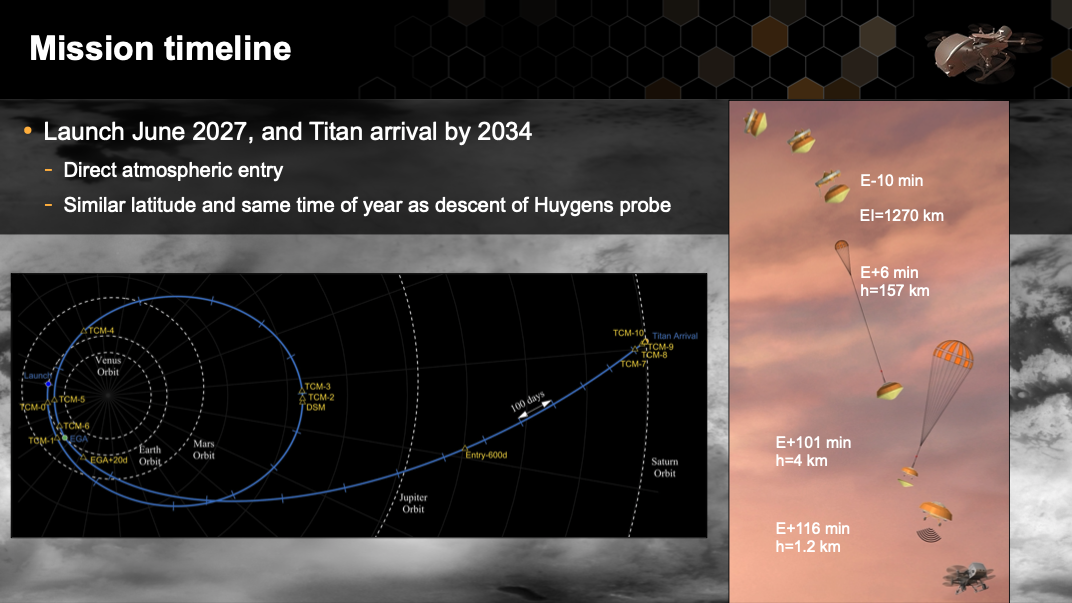 A preliminary mission timeline for the cruise phase and entry operations. Final timings and trajectory are dependent on the launch vehicle selected. (Credit: NASA)

“They’re grossly different atmospheres,” related Buecher. “Also, the gravity on Titan isn’t the same as Mars; it’s about one-eighth of a g whereas Mars is about three-eighths of a g. So you have low gravity and a dense atmosphere.”

“That’s going to slow that entry body down even more” even though the “entry mechanics, the pressure poles, and some of the heating [are] actually very similar to the two because they’re so dynamic, they’re coming in so fast supersonically.”

To this end, the aeroshell’s basic design for the heating regime is very similar to what Lockheed Martin has used on past Mars missions.

“We will use PICA on the heatshield and something called super light ablator on the backshell, same that we used on the Mars 2020 and MSL missions,” noted Buecher.

However, Lockheed Martin must design the structural components of the aeroshell differently from Mars missions due to Dragonfly’s planned mass and its destination’s thicker, denser atmosphere.

“The structural loads are a little bit different, and that’s partly due to the mass of the payload, i.e. the lander that we’re bringing in, but also what our angle of attack is coming into the planet and the size of the parachutes and the constant dynamics of it going through the atmosphere,” explained Buecher.

The denser atmosphere compared to Mars allows the mission to slow down more during the aerobraking portion of entry. This means smaller parachutes are needed to effect a landing on Titan compared to the ones needed at Mars.

Smaller parachutes equal lower loads to the aeroshell during parachute deployment and descent.

However, the denser atmosphere and the mission-specific requirements to release Dragonfly – after its rotors are active – for the craft to fly itself the final few meters to Titan’s surface means the aeroshell and backshell have to perform a much longer descent compared to Mars missions.

At Mars, the EDL sequence takes roughly seven minutes from atmospheric entry to touchdown. Landing on Titan for Dragonfly will take approximately 105 minutes based on current mission plans.

“We had to think about temperature,” said Buecher. “Titan is a cryogenic moon. So some of the things we’re having to evaluate are the temperature side in a lot more criticality because we’ll hang on the parachute much longer. We’ll hang on to it about an hour and a half versus about two minutes on Mars if that.”

These factors necessitated studies into the thermal environment’s effect on different materials and elements on Lockheed Martin’s portions of the mission. 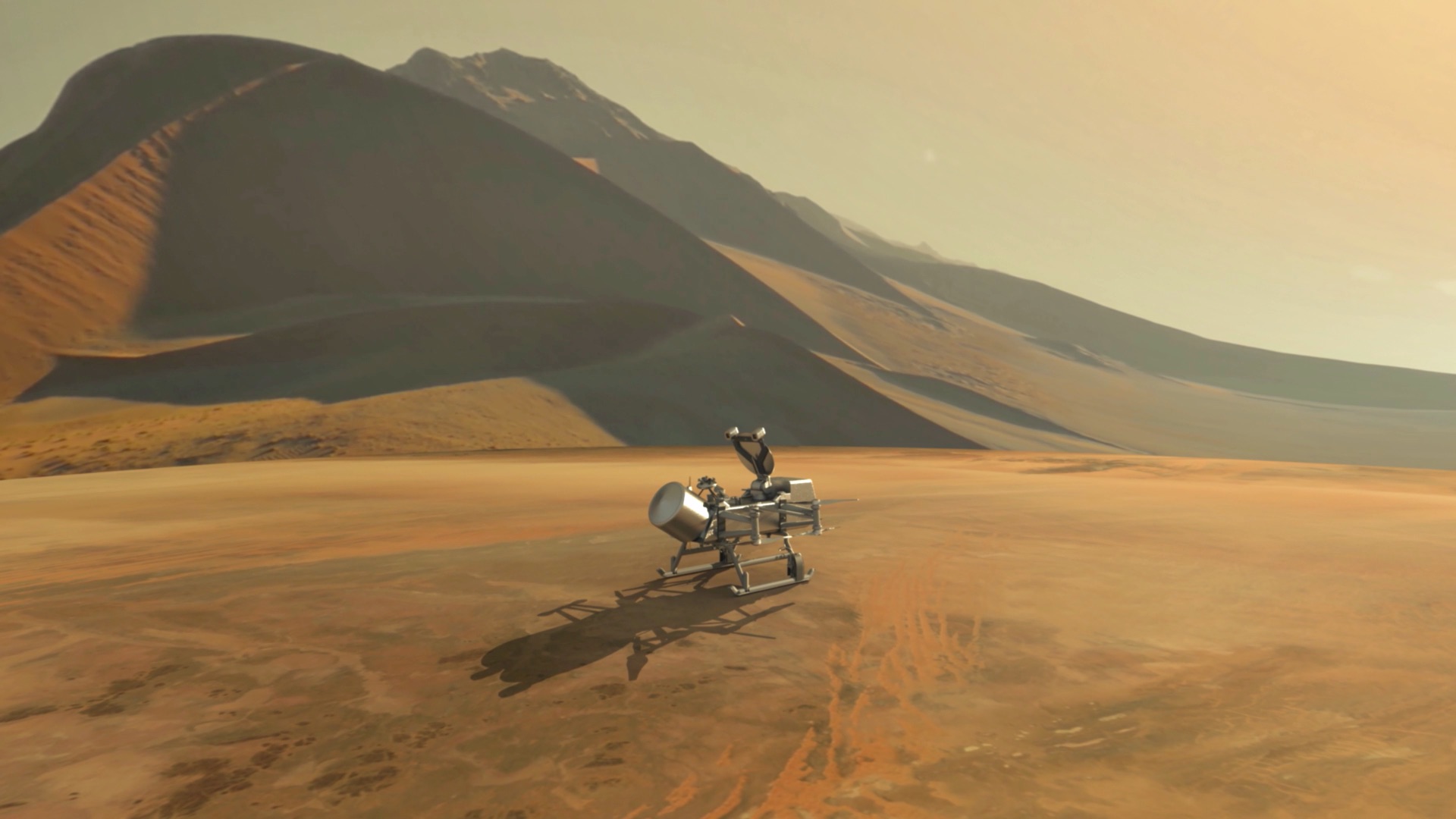 These studies will likewise feed decisions on what needs to be insulated or heated or completely changed out based on the expected thermal environments during the Titan landing.

Heading into the mission’s overall PDR in February, Lockheed Martin has completed its subsystems PDRs for the aeroshell, backshell, and cruise stage, and has also completed an internal PDR for the EDL portion of the mission.

With those PDRs behind them, Lockheed Martin teams are moving into the detailed design phase for various structural elements that will need to be fabricated and tested.

“We received the layout molds that we’ll go and build the aeroshell with,” noted Buecher. “Those arrived back in October, and we’re pretty excited to have the first big hardware delivery because they set the stage for the size and shape of the aeroshell.”

Flight material procurements will also be in work this year, all of which leads to Lockheed Martin’s Critical Design Review later this year.

The Dragonfly mission is currently targeted to launch by June 2027 for arrival at Titan in 2034.