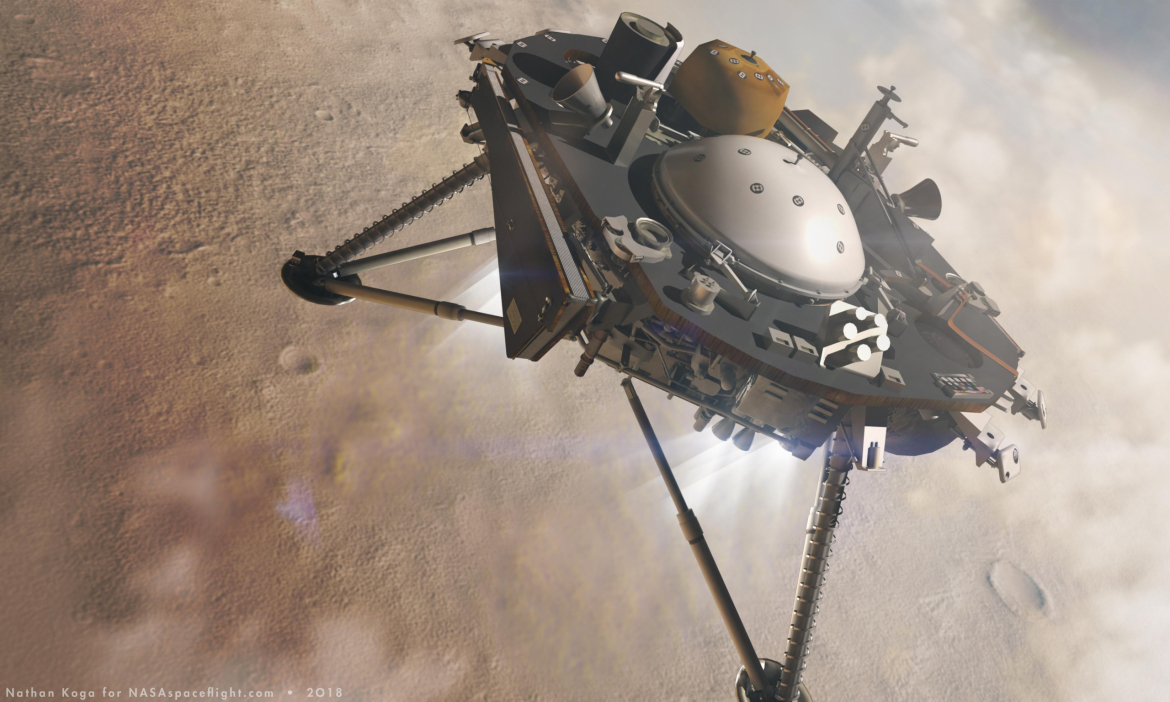 Throughout its mission, InSight studied Mars extensively, collecting a plethora of ground-breaking science on the planet’s interior and exterior geologic processes.

Following the craft’s landing on Mars on Nov. 26, 2018, at Elysium Planitia, just four degrees above the equator, a main scientific aspect of the flight was to deploy a seismometer onto the Martian surface.

InSight was the first mission to detect and measure seismic activity on another planet, recording over 1,300 quakes — the largest two of which measured 4.2 and 5 on the Richter scale.

A magnitude 5 quake was the approximate upper limit of seismic activity teams expected and hoped to monitor with InSight. 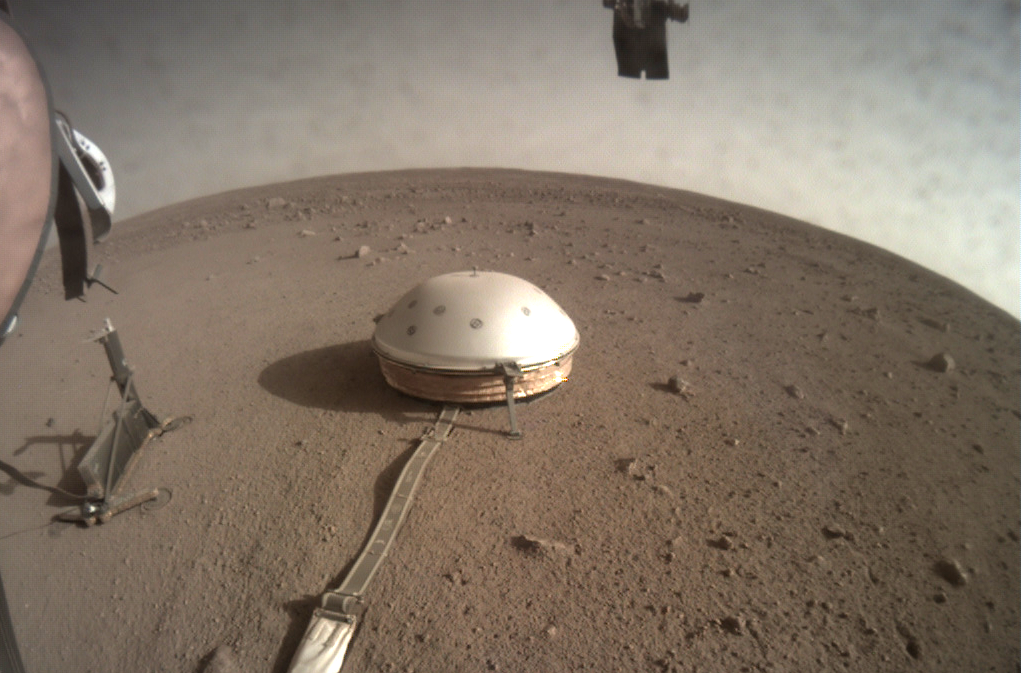 Called the Seismic Experiment for Interior Structure (SEIS), the seismometer experiment was provided by France’s Centre National d’Études Spatiales (CNES) and placed onto the surface of Mars by the lander’s Instrument Deployment Arm.

So important was the seismometer for InSight and future Martian exploration initiatives that it was one of two experiments to receive priority during the mission’s final year of operation when power consumption vs. production was carefully monitored and controlled.

The other instrument to receive this priority was the lander’s weather station.

As with previous NASA missions and payloads sent to Mars, the seismometer’s development was not without issue, with development delays contributing to the mission’s launch postponement from 2016 to 2018.

However, once on Mars, the situation changed.

“When the instrument actually got to Mars, it really behaved and performed flawlessly and was able to actually measure at a precision that was almost 10 times better than our design goal,” related William “Bruce” Banerdt, the Principal Investigator on the InSight mission in an interview with NASASpaceflight.

Information from the seismometer has already allowed scientists to measure the depth and composition of Mars’ crust, mantle, and core. As seismic waves move through a planet’s interior, they change as they encounter different types of material.

These changes allow scientists to determine the depth, composition, and structural elements of a planet.

But InSight’s truly groundbreaking mission and the science it returned were not without issue. InSight also carried the Heat Flow and Physical Properties Package (HP3) from the German Aerospace Center (DLR).

HP3 was nicknamed the “Mole,” and like SEIS was designed to provide information on Mars’ interior.

After deploying the Mole to the surface, difficulties with burying it into the ground soon arose.

“Because we had the problem with the Mole penetration, we actually stayed on some relatively intense operations for a whole year or more after [landing],” related Banerdt. 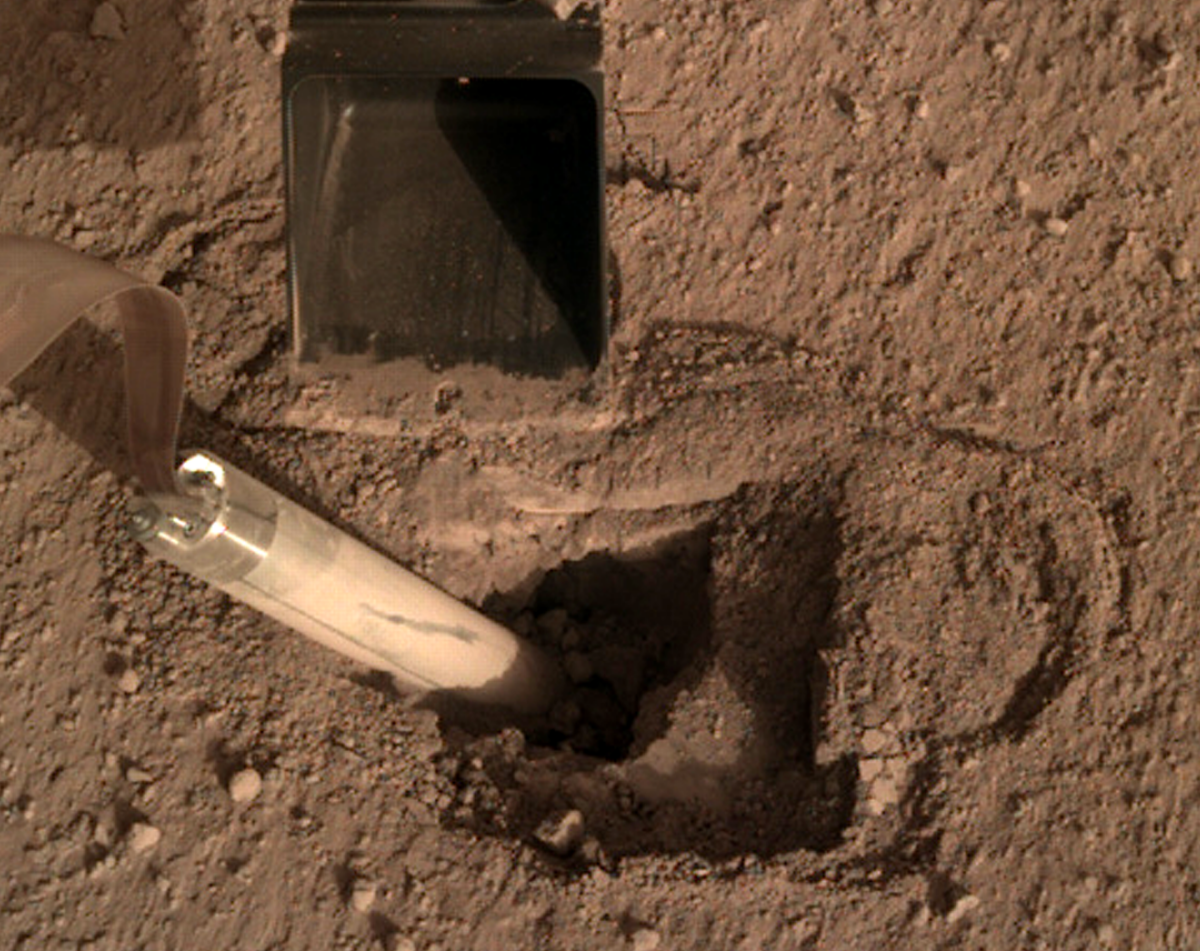 The Mole, seen from InSight after attempts to bury three meters below the Martian surface failed. (Credit: NASA/JPL)

InSight’s attempts to bury the Mole in the Martian soil began in Feb. 2019. However, probing the instrument to the desired depth of at least three meters ultimately failed. By Jan. 2021, teams commanded InSight to push the Mole one last time, with the top of the instrument only reaching a depth of around two to three centimeters below the surface.

“We actually think that if we had gone to a different landing site, we probably would have been successful with the Mole,” said Banerdt. “It was designed to go into the kind of soil that we had seen and analyzed at the Spirit and Opportunity landing sites and also Curiosity and Viking.”

According to Banerdt, the location within Elysium Planitia where InSight landed did not feature the same sandy soil the Mole was designed to penetrate. Instead, the surface material was something that teams had never encountered before.

“All the landers that [had] gone to Mars before landed and spent most of their time on sandy soil with some small rocks in it. That’s what the Mole was designed to penetrate into, and we’d successfully done that in these tall vertical chambers on Earth,” Banerdt related.

“Scientifically, it was actually really interesting that we had different kinds of soil there with a thick, kind of crusty layer. At the surface, that crumbled under impact and vibration, to make a soft, kind of dusty soil within a kind of a hole in a harder material.” 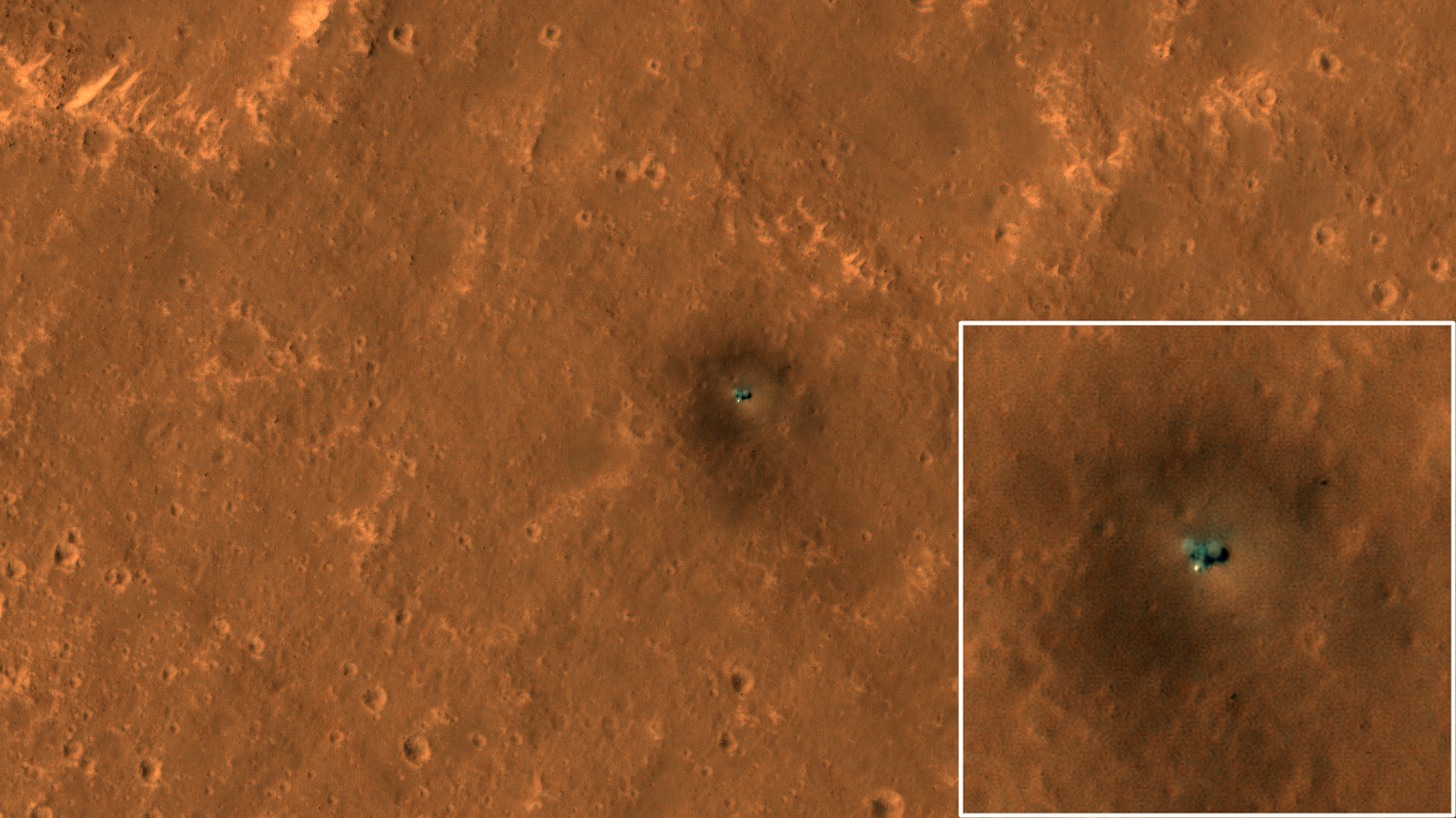 InSight, seen from orbit in this image from the HiRISE camera on NASA’s Mars Reconnaissance Orbiter, taken Sept. 23, 2019. (Credit: NASA/JPL-Caltech)

“This wasn’t seen before on Mars. We think it might possibly be due to the fact that we actually landed inside of a small crater that had been filled with windblown dust.”

While the main thrust of its mission was the scientific investigations it was sent to conduct, the lander itself debuted numerous improvements over NASA’s previous stationary lander: Pheonix.

Phoenix was a polar landing mission that arrived on Mars on May 25, 2008, for a mission that ultimately lasted 157 Martian days, or sols, against a planned 90 sol mission.

In the years of Phoenix’s design and flight, InSight’s team was able to learn and incorporate changes to their lander, including larger solar panels, higher capacity computers, improved software and battery systems, and improved cell chemistry in the photovoltaic cells on the solar panels.

Some of the software improvements aboard InSight included the introduction of a fault protection system that monitored the output of the solar arrays and could shut down non-essential systems if a power issue arose. This was disabled in the final weeks of the mission in an effort to increase science output from the lander during its final days.

“On Phoenix, we looked at battery voltage as our way of determining if we had a power problem,” said Piet Kallemeyn, a Senior Staff Systems Engineer at Lockheed Martin in an interview with NASASpaceflight. 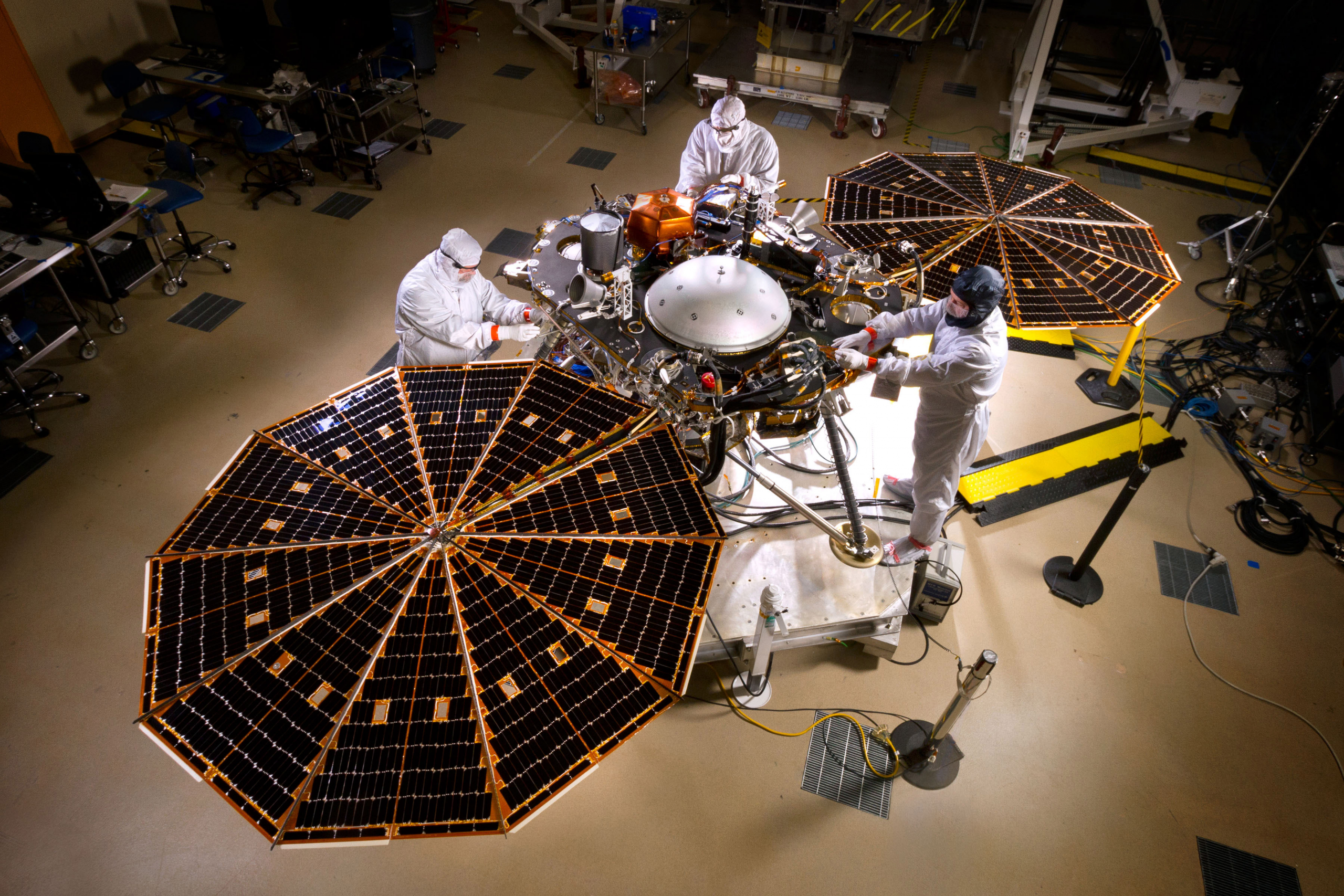 “But on InSight, we said ‘Let’s look at the battery, and let’s look at the solar array.’ That second feature, which was new, was very helpful, and it ended up helping to protect us against a couple of dust events that we had on the InSight mission.”

InSight also featured dead bus recovery which gave the computer’s the ability to power back on while the spacecraft was in dead bus mode — where all systems are shut down except for the equipment designed to charge the battery.

During dead bus mode, “If we were to get a cleaning of the array and production of the solar array [were to] increase, that circuitry that would charge the battery [would have brought] the battery voltage back up. And then, if it [reached] a certain threshold, the lander [was] basically hardwired to automatically reactivate and turn itself on,” said Kallemeyn.

Unfortunately, InSight never benefited from a solar array cleaning event during its operational tenure, and dead bus mode is ultimately what occurred when InSight succumbed to low power levels.

In all, InSight operated on Mars for 1,440 sols against a planned 709 sol mission. On Dec. 21, 2022, NASA officially declared the InSight mission over, citing failed attempts to regain contact with the lander following its final transmission on Dec. 15.